dingbat AOC Is At It Again 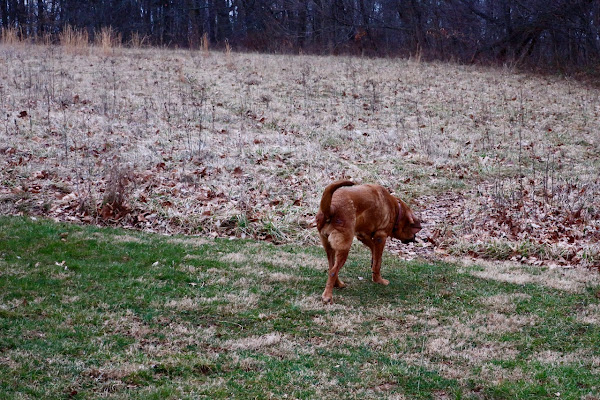 With a dark and dreary Saturday morning the hounds and I once again started our day off late. I guess it can officially be called our new routine, with everything shifting about an hour later than normal. Late night reading is equating to getting up later. At least it was warm this morning, low 40's and that rain in the forecast never showed up. So much for 100% chances I guess. I forgot until I was a few photos in today, the camera was set on 'automatic' instead of my usual 'manual'. 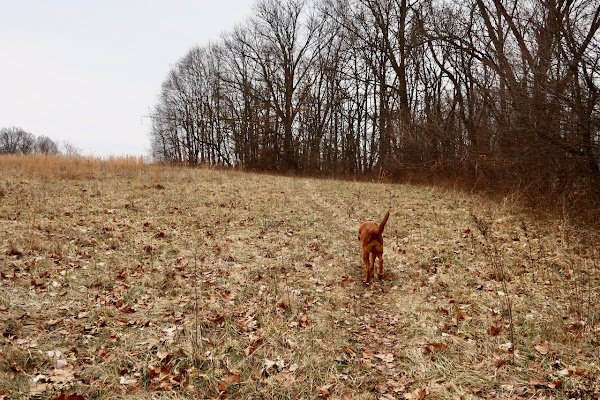 It was another night of interrupted sleep with some of the strangest dreams. I was happy to finally get up and see things were normal and not weird, if you know what I mean. It was also going to be a test today, a huge test in a way. I was out of granulated sugar. I normally have a couple of teaspoons per my 12oz cup of coffee (2 cups per day). Yet, there was no way I was starting the day off without coffee ... I'd drink it black. 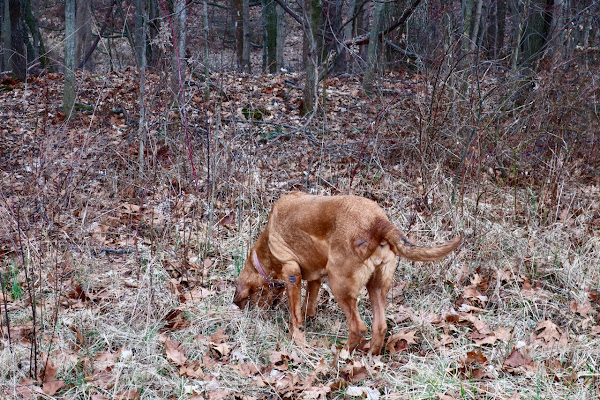 I was needing to make a trip to the grocery story today, so that list was on top of my thoughts as Stella and I walked in the field. For some serious initial weight loss I was thinking of going strictly Keto and stay within their limits for daily carb intake. That is hard with sugar for coffee, a banana, an apple or even a cup of blueberries in a day.

I decided that before I would go to the store I'd look back through the websites I had bookmarked months ago when I was looking into the Keto Diet. The fact of the matter is I need a change in diet ideas even though I eat what most would consider healthy. I can't eat "just a little" carbs because even a little knocks me out for those afternoon siestas. I know those periods of low energy are carb related based on my tests of eating different foods. I don't feel as good as I think I could feel. 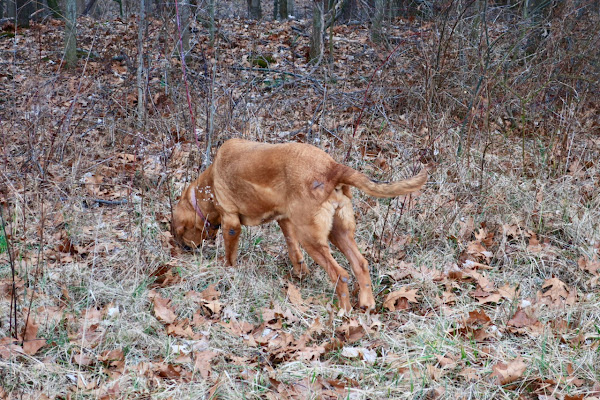 So with that in mind, my goal was to get in and out of the Super Walmart grocery section without any pasta nor a new small bag of granulated sugar. No bananas. No Mangoes. White or Sweet Potatoes? No. No yogurt either due it causing indigestion.

Some of my shopping list would be the same as in a steak or two, fresh wild caught salmon, chicken thighs and breasts with the skin. No yogurt this time but the larger container of cottage cheese. Veggies would be about the same as I always buy. So it would be interesting to see if I could make it home with my new shopping list. 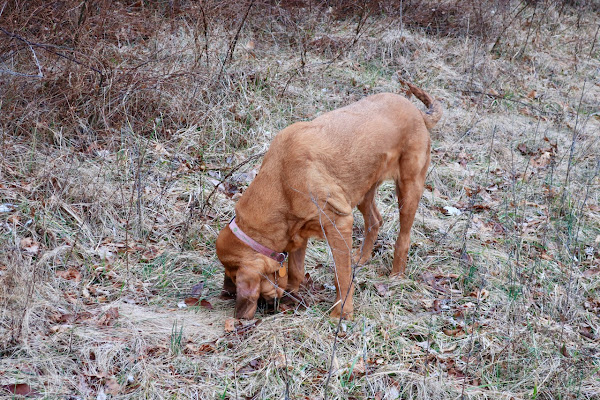 Although it was nice and warm and I was pretty sure Stella would not attempt any breakouts from her bedroom 'jail' this morning. I wasn't more than a few miles west of town when rain drops started hitting my windshield. That light rain never stopped. It was doing that when I took my siesta a little past 1:30pm and was still coming down as I wrote this, after 4pm. So the afternoon walk was cancelled.\ 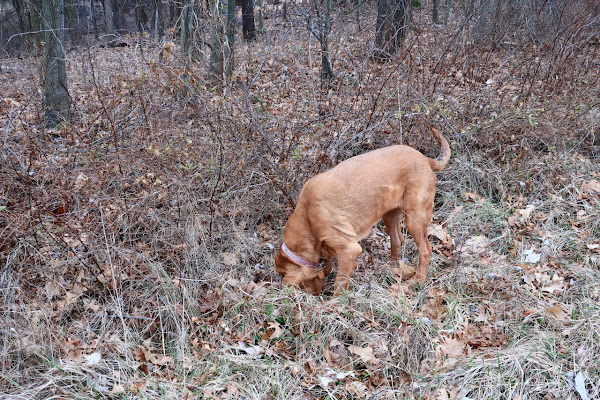 I did stop at the library on the way to the store. I picked up two books that looked interesting but after a reading a few pages of each before my siesta, I had a feeling I had made a mistake and I wasn't sure I'd finish either.

Now the book about Steve Job's, that I was reading late into the early morning hours last night, is very interesting. Not so much about him but more about all the high tech development in Silicon Valley, where he grew up. Yes, even as a youngster, he had an amazing mind but I was totally unaware of the massive build up of companies in that area in the early 1970s. Very interesting 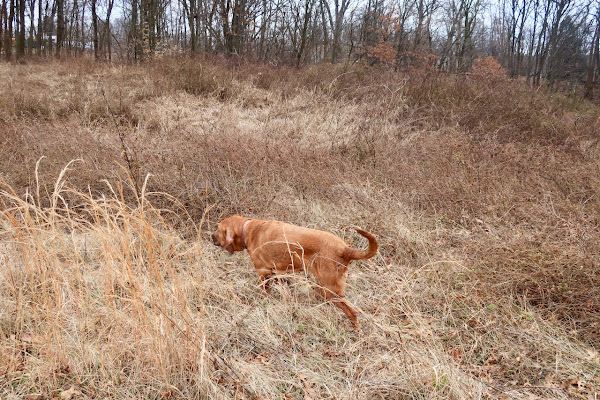 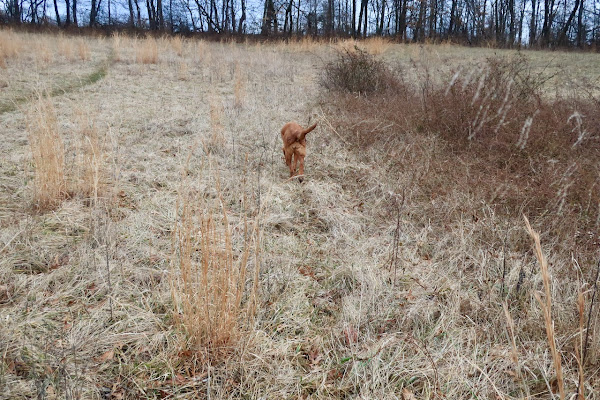 That path you see Stella walking on, along the edge of the gully, is made by deer traffic. It will curl to the right, around that bush up ahead. While I walked in new territory with heavy thick grass, I could feel just how wet and saturated the field was. 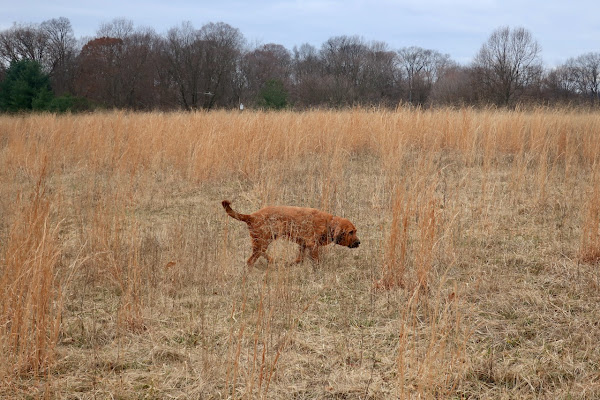 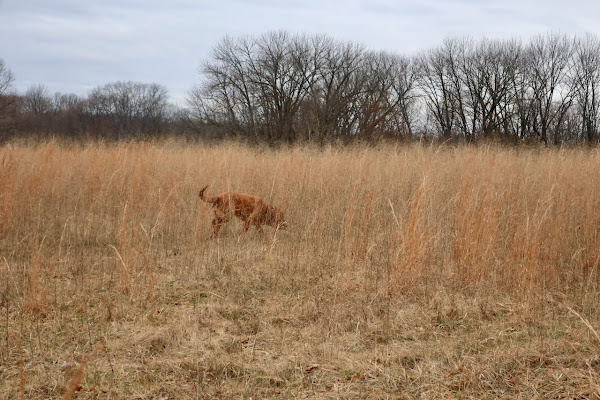 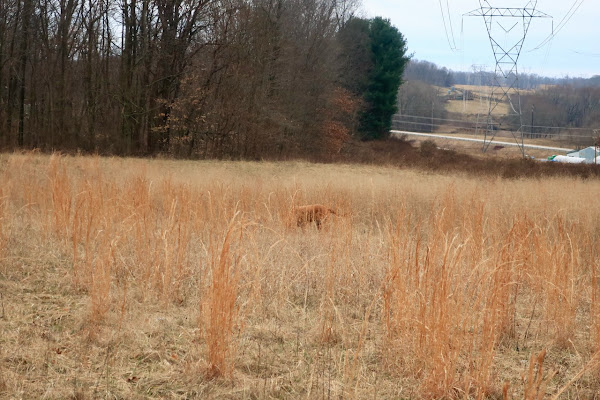 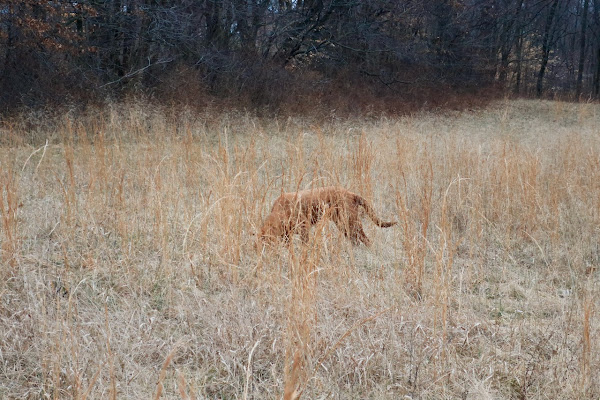 After I made the final turn home, she was way to the left of me. I had let her do whatever she wanted as I walked along the back edge of the field. She did finally head my direction, turn on the path and head home with me. It was really quiet this morning with no wind, no sounds of birds and warm enough where gloves were not needed. I had a feeling not much was going to happen. Enough stuff to blog about ??? Maybe not. 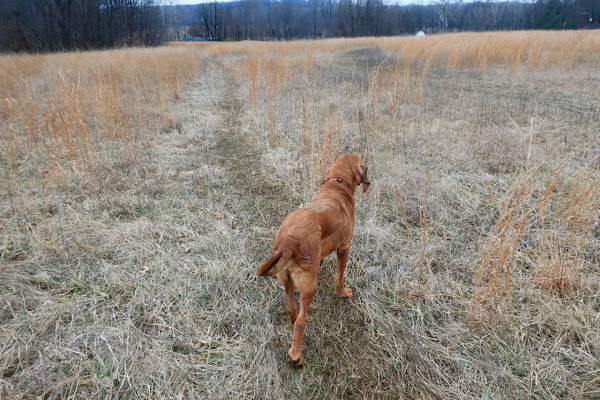 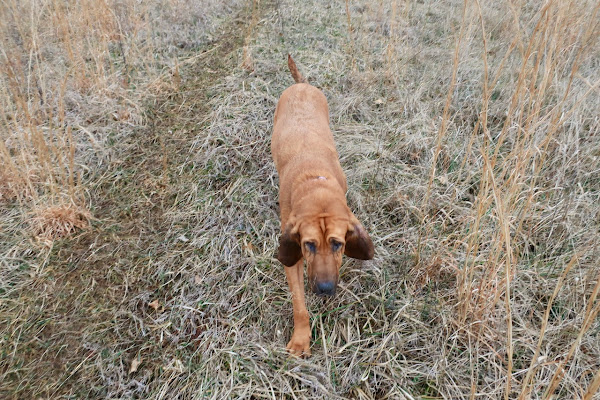 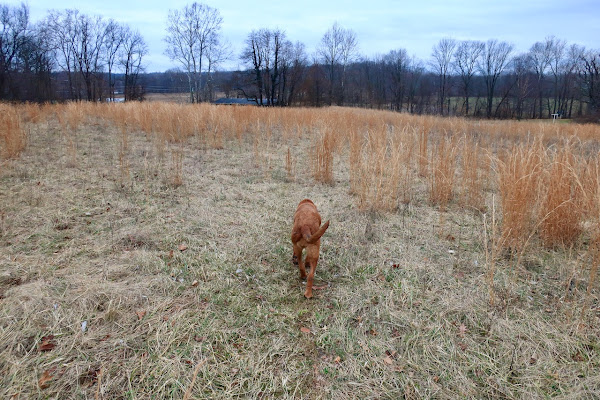 She strolled at a pretty steady pace once she made the final turn home. 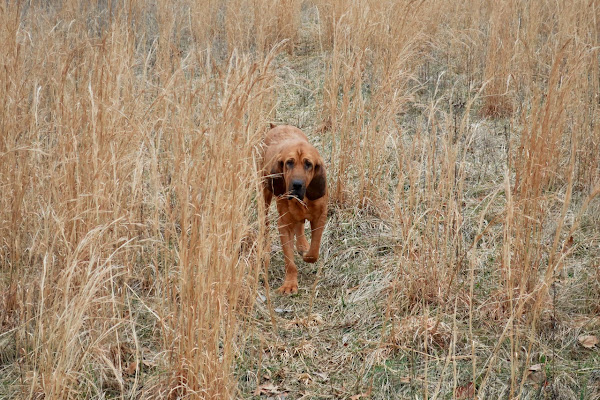 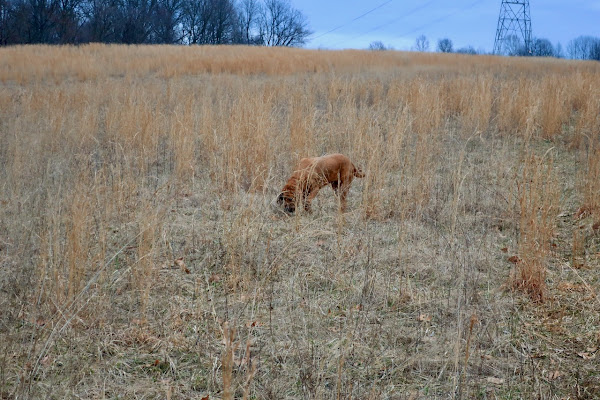 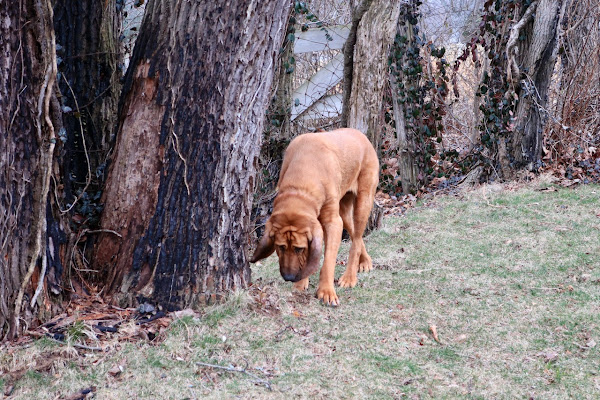 I didn't read a lot of news this morning. I didn't even glance through my Flipboard account for new things to read but I did catch this little gem. While the news was focused on Bernie's socialist background, where he said "breadlines are good" .... our favorite "dingbat AOC" was letting the Democratic establishment know .... drum roll ..... "We're In Charge" ....

I wonder if she realizes just how many journalist jobs she saved these past two months after her arrival in D.C. ?? She will give them enough material these next two years or more, not only will they keep their jobs but I am sure a few new books have been started as an idea.

I want you to know your tax dollars ... yes yours ... are being well spent. She put her staff on a minimum salary of $52,000 per .... even the gofer that delivers that "grande" Starbucks she always has in her hand. Of course $52K per year doesn't go to far living in D.C. She is so stupid that in a way it's scary. Stupid people follow stupid leaders which lead to stupid election winners and stupid decisions.

I know its way to early to pay to any attention to political polls this time of year or so far in advance of the 2020 election but that really is just around the corner. It just drags on because it will be nonstop news coverage of every little thing said or done by whom.

A couple of other tidbits show that this campaign may make this one even uglier than 2016. We have one candidate telling her staff years ago to clean her comb ... hair comb??? Of course. Everybody needs a clean hair comb ... especially after you have used it to eat salad. ????  Really ???? Is that Presidential material ?

I've done a LOT of wild things in my life but I don't recall ever eating my salad with my hair comb. Even when I was drunk and stupid in Encenada or Tijuana, I didn't do anything that gross.

Ms Harris couldn't seem to remember her vicious tweet that people have copied into an image before she deleted it. I didn't and don't have it, but it was racially slanted when she heard Jussie's original story of being attacked at 2am in the Windy City during the Polar Vortex. She looked confused when asked, even glancing back at her staff for an answer, she didn't seem to remember that vicious tweet she had made on her verified account. Is she really Presidential material ?

As you can see by these few examples, the longer the campaign goes the uglier it will get. It will not be about their plans or platforms they are running on. We will hear more about what kind of underwear they are wearing, whether they smoked dope in college, how many private planes they fly or luxury homes they live in. At no time will we hear of any plan on how to pay for these fantasies they are going to run on.

The last time I checked, hospitals and doctors are not free. Someone has to pay.

I am more interested in seeing some big name people from a few years ago be brought before a judge or jury and end up in jail where they belong. We know that will never happen. Not only are we on a different pay scale than they are, but we have different laws than them. They are always covered when the shit hits the fan, we are not.

Is Hillary still drinking and stumbling around the house? I'd like to see her return to the 2020 campaign just for shits and giggles.