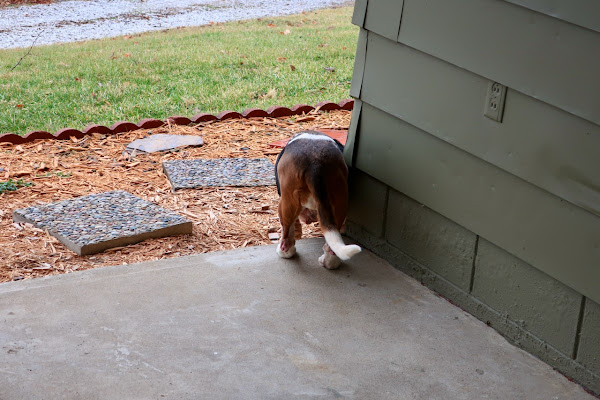 I knew by lunch on Monday there wasn't going to be a lot going on around here. The light rain never stopped. I was surprised that Heidi went as far as she did, all the way to the front yard. Stella decided she wasn't getting off the concrete floor and even snuck around the Mini Cooper to go back to the door. 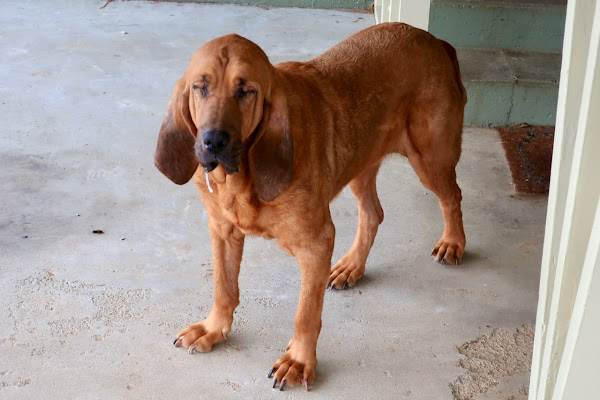 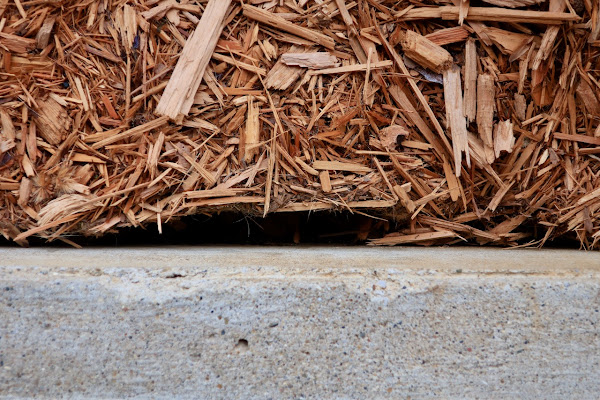 While Heidi was heading out front I noticed some things that all the rain did the other day and the standing water. The owner of the landscaping business told me last fall when I was buying new mulch that in some cases mulch is better than adding dirt when there is soil erosion, like I have. 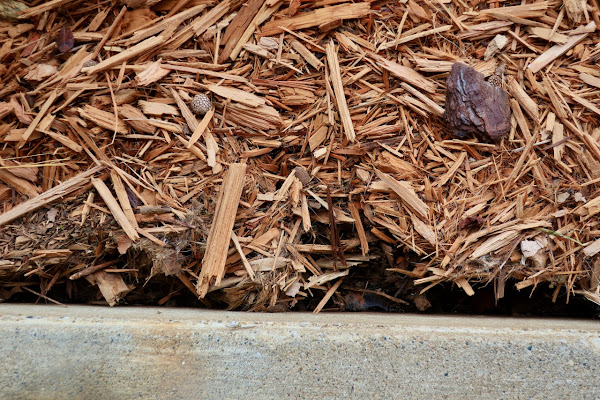 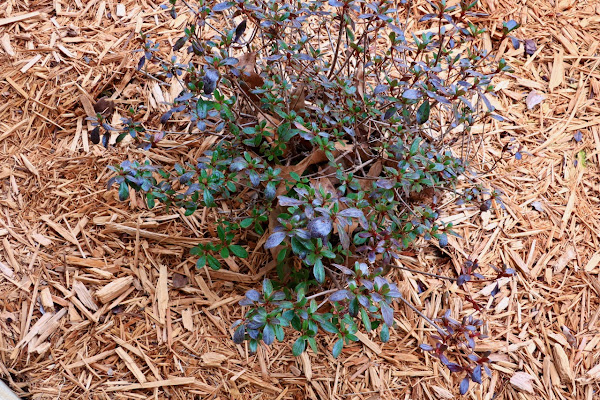 It was good to see some green showing up in the Azalea. Due to being under the overhang but centered in the flowerbed, it doesn't get much rain and I have to water it during the summer. I might replace them with some kind of ferns this spring. 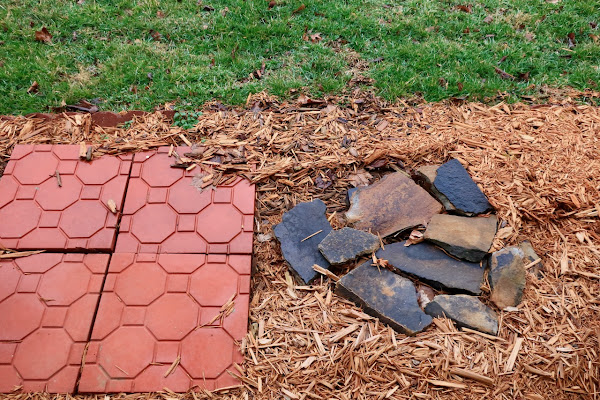 The mulch tried to float away the other day but luckily the stones kept most of it around. I still want to have a big rock delivered and placed where those two different types of stones are. It would give the ground some stability and the overflowing gutter could drop water on top of that big rock instead of these stones. 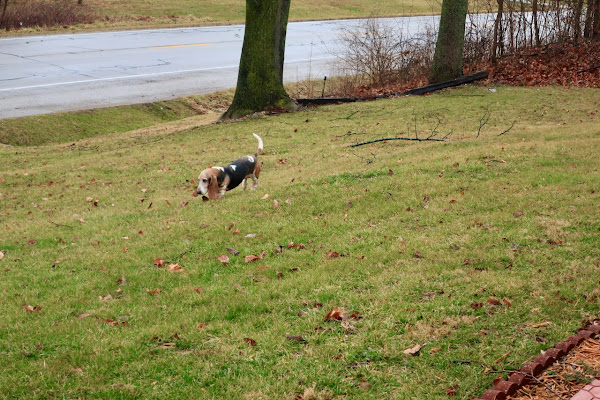 Heidi got a little running in today. She doesn't like to get wet either but she found a spot in the middle of the front yard today so she had no choice about staying dry. It was good to see her 'sprint' up the driveway back to the door to go inside, getting a little exercise during the winter. 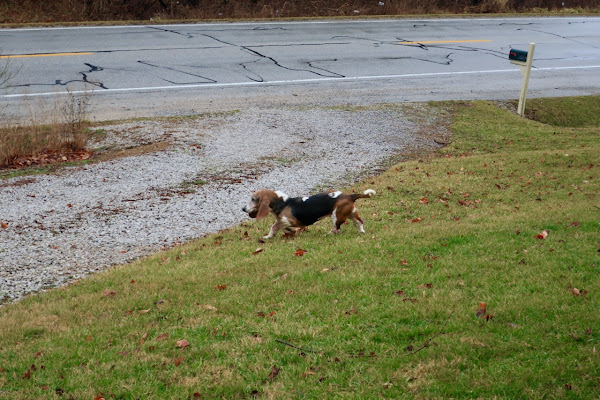 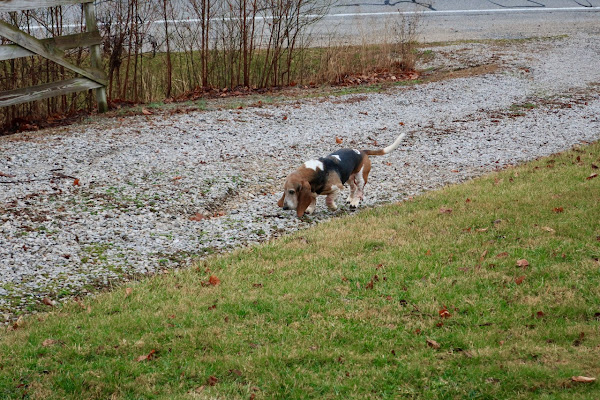 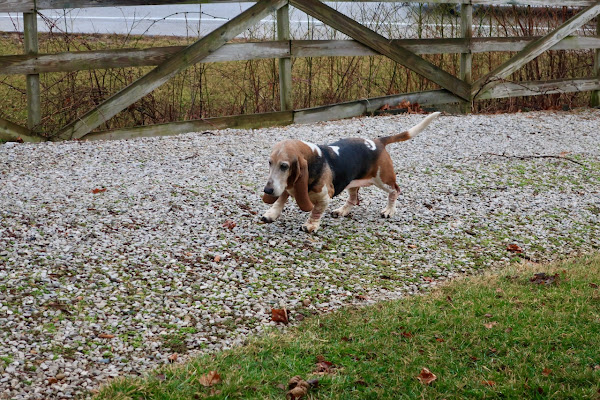 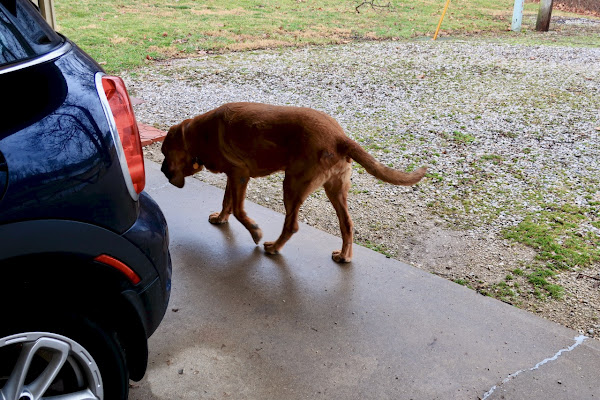 While the light rain continued Stella stood at the edge of the concrete looking out onto the driveway but decided she was not going to get wet. It was only sprinkling like it was this morning during the walk but she wasn't doing it. About the time I said something to her, she snuck around the Mini Cooper to go back to the door.\ 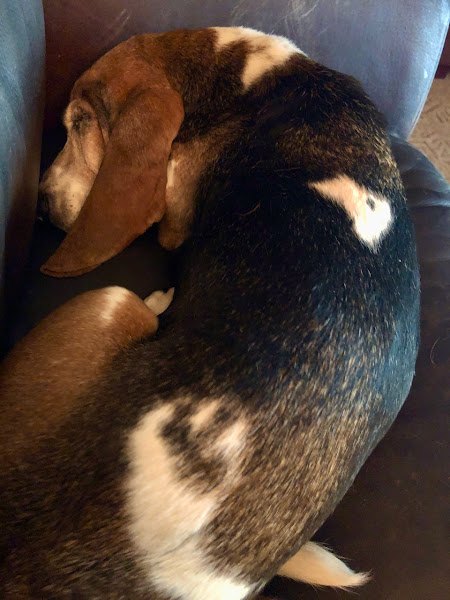 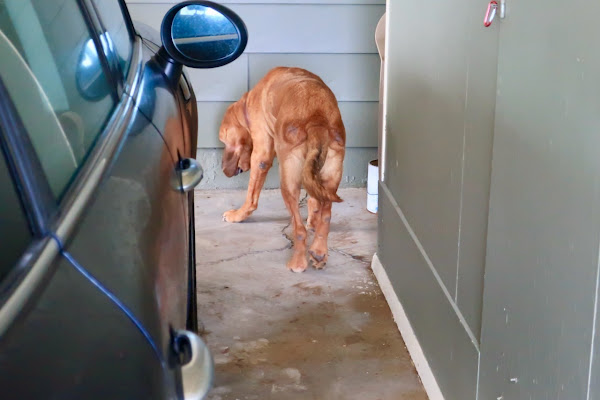 It wasn't long before both hounds were in their afternoon spots on the couch while I read books. That is their sleeping areas in the afternoon and night. I might have to take back what I said the other day comparing the iPhone 8+ photos with the Canon G9 X photos inside in low light. After seeing these I think the iPhone might be slightly better in capturing more details in low light. 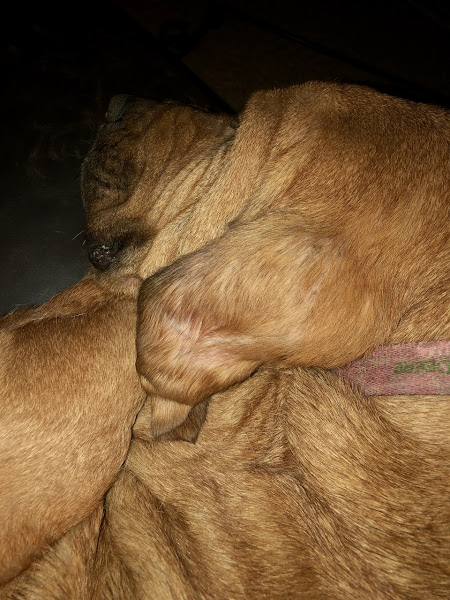 I could tell a huge difference Monday, I never watched one minute of tv news and didn't glance at any news online. I checked ESPN of course but they seem to stick to sports news again unlike a couple of years ago.

I am writing this late Monday night and will schedule it to post early Tuesday morning. With that in mind I might get back on a schedule with posting my one post of the day at the end of the afternoon or early evening. That way I can cover all activity that day instead of overlaping days. I can surely keep the number of photos down to 30 and show a few less photos from the morning walk.

As a reminder, for those that don't have a WordPress account but want to make a comment. All you need to fill in is your name and email address, leaving the box for the website blank. Your email address is a WordPress requirement for comments but will not be used by me in any way. Also the very first comment you make I have to approve, as per the rules of Wordpress. After your first one your comments will post immediately.

I might have to get creative on Tuesday to have enough photos for the second post of the day. Rain is in the forecast again, how hard or light I don't know nor how long it will be. Sounds like another perfect day for some Mahjong games, a little reading and a short siesta.

Time flies when you have too much fun in 'the tropics' of Southern Indiana.
at February 12, 2019