Local Flooding Not To Bad 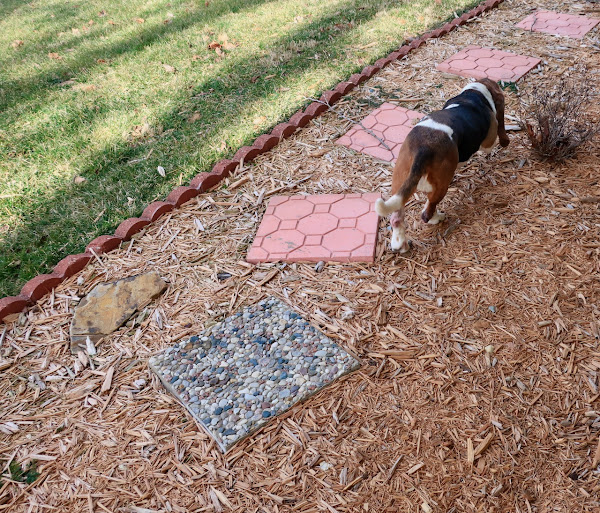 Once the hounds were fed lunch I had plans of driving the local area taking photos of what I assumed would be some major flooding in the area. I was surprised ... nothing that I saw was out of the ordinary like I thought I'd find. Yes, the highway heading north out of town was closed due to flooding as usual, but the water level was not close to the highway heading west, like I expected. 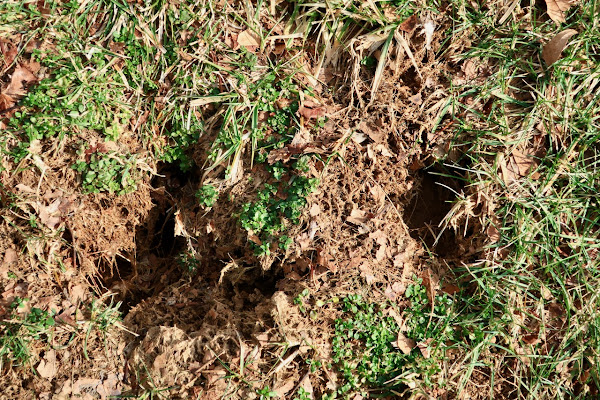 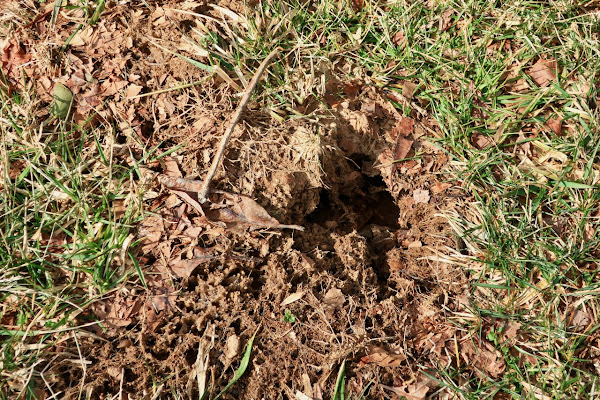 Here is some of the yard damage after all the water was absorbed by the yard. Any gardeners or landscape experts out there? Can you tell me what this is?  Yard moles or something else? 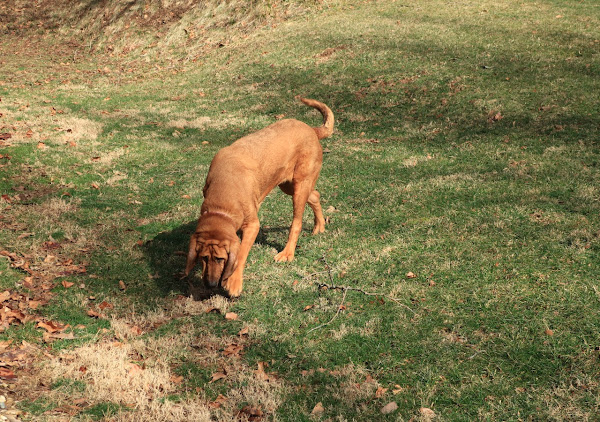 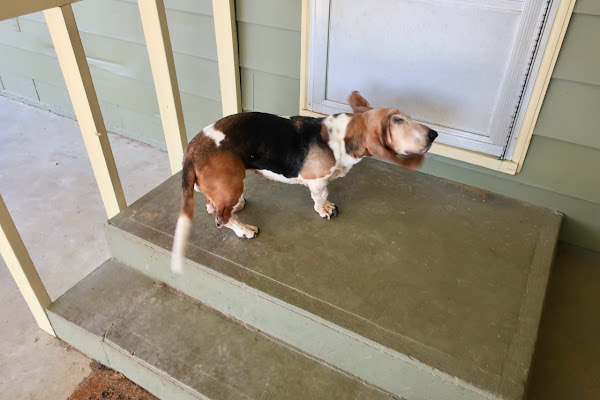 Both hounds were ready for their afternoon siestas and I was ready to take a drive. 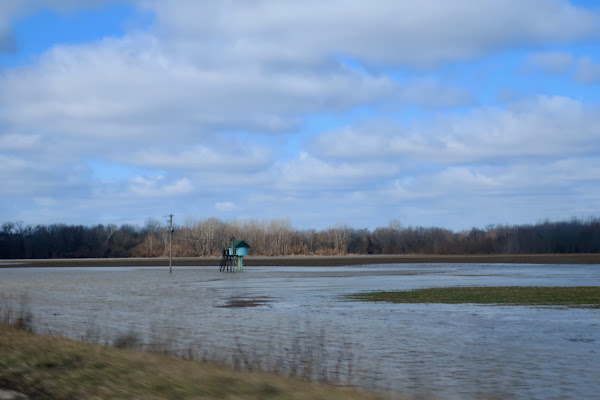 Good to see a part of the local water system, which I do use their service living outside of town, is above water. Yet that is a good gauge of the depth of the water in the low laying field. 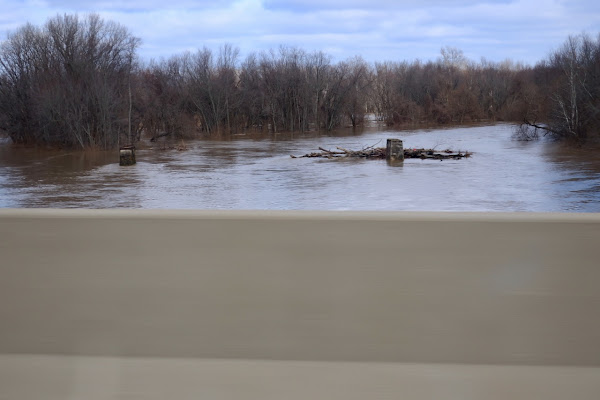 Even in 24° weather I rolled my car passenger side window down with hopes of getting this exact shot. I wanted a clean window and if I didn't roll down the one I had, I'd have a dirty filter for the photo. The Canon G9 X did well shooting on the move. 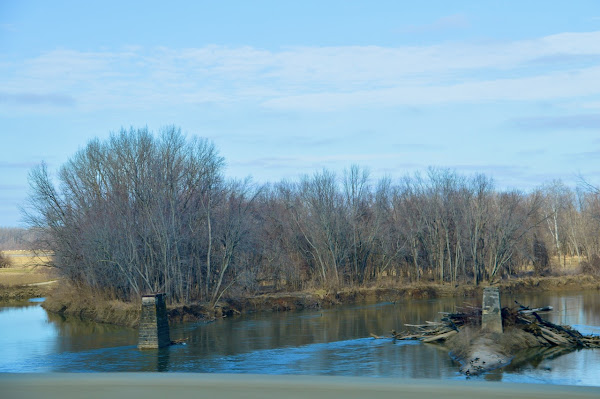 Here you can compare and see just how deep the water has risen during the storm that started Wednesday night and peaked at 11:30am on Thursday. This was taken on January 10th of this year. As you can see the river has risen quite a bit in a very short time. 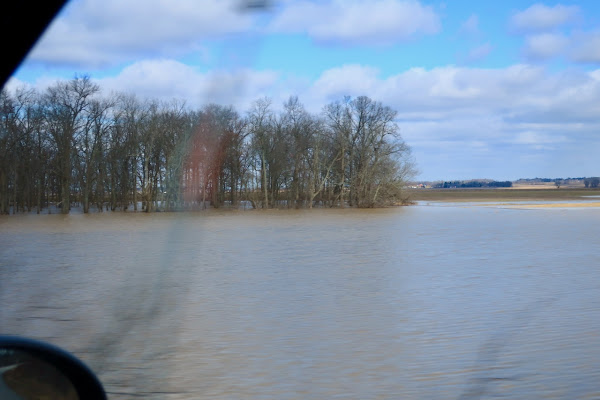 This is just normal flooding after a good few days of storming, as I have seen it much worse in the past. The airport I blogged about on January 10th is to the left of the photo.

I admit, unlike some bloggers that take photos of their local area while driving roads they know and some areas they see everyday, I am not good at doing that. It's mainly because I really don't enjoy it that much. Even when I was much younger, before the internet was even a thought, I was never was one to explore the local area ... I'd rather spend time shooting free throws on the backyard basketball goal. 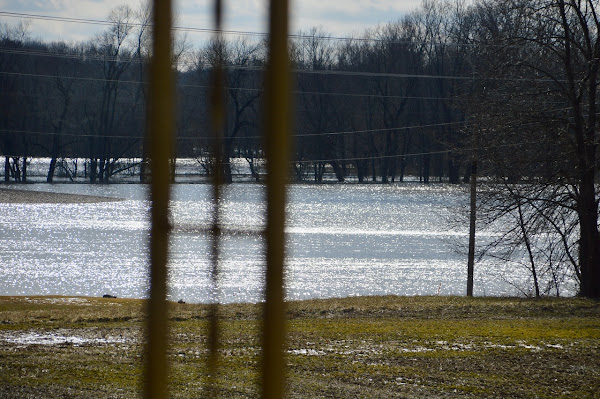 So after that group of photos from the local drive which turned out less than I had expected, I stopped for a few groceries, filled up my gas tank and headed home for a relaxing afternoon. I played a few games of Mahjong with this view from my laptop. Isn't that a nice view of my new lake? While the hounds slept I read some, then took a siesta just like them. 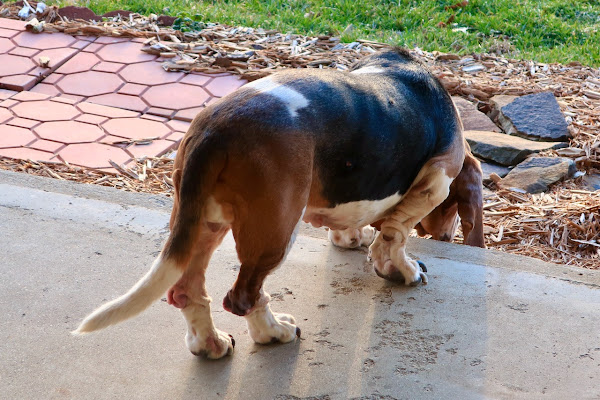 A little after 5:30pm it was time for our second walk of the day. The only difference besides the weather, Heidi led the charge outside wanting to spend some time exploring the yard while Stella and I walked our half mile as the sun went down. It was 24° but she was more than excited to get outside. 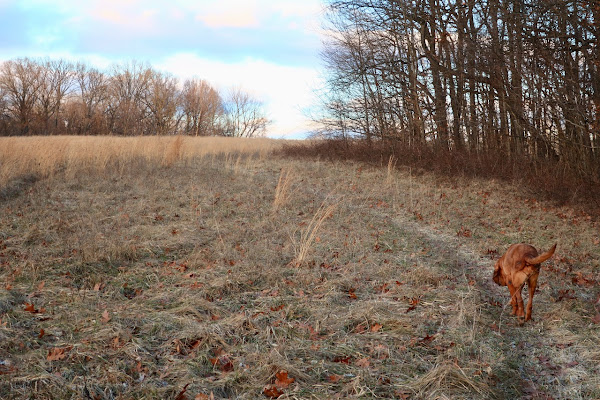 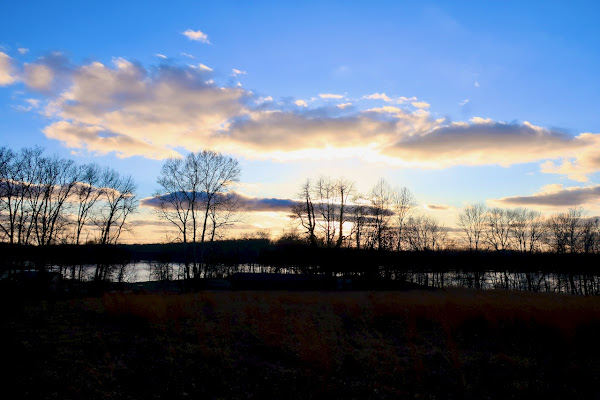 You can see just how far the flooding goes to the right of my house and across the highway. Most of that water will go, I don't know ... maybe a quarter mile to the north. 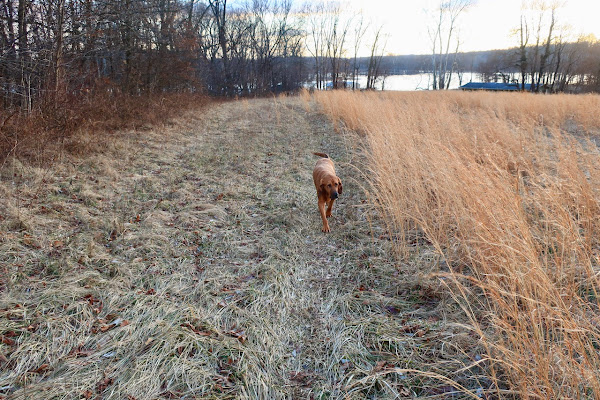 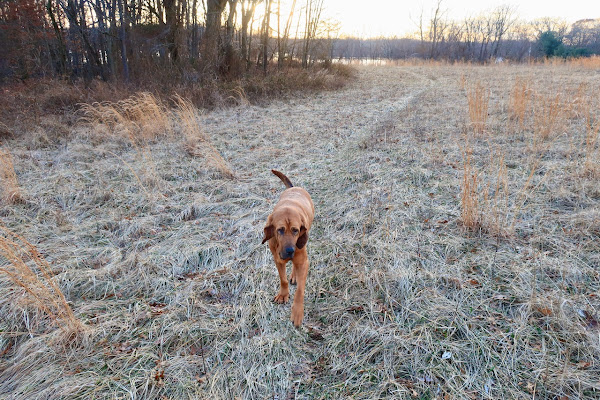 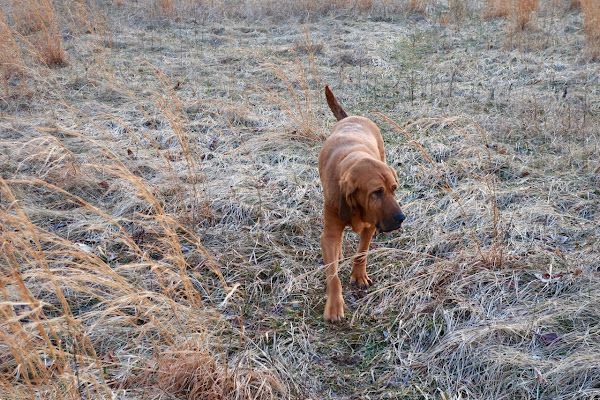 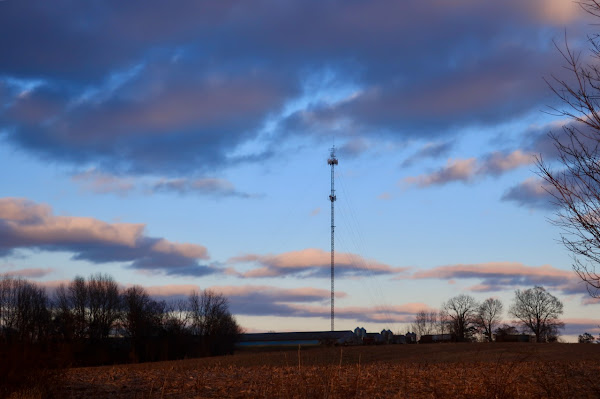 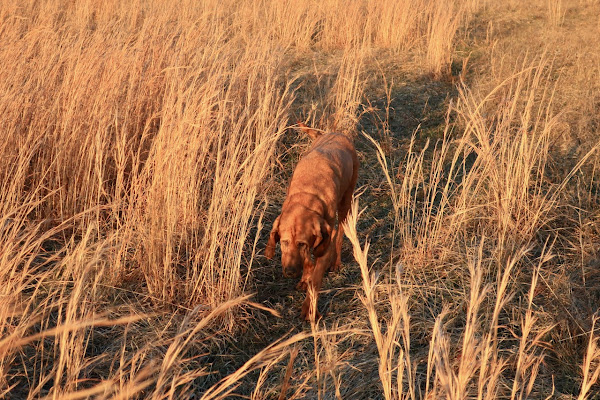 Walking back directly in the sun gave all the photos a much different look. Very little editing on any of these photos today. 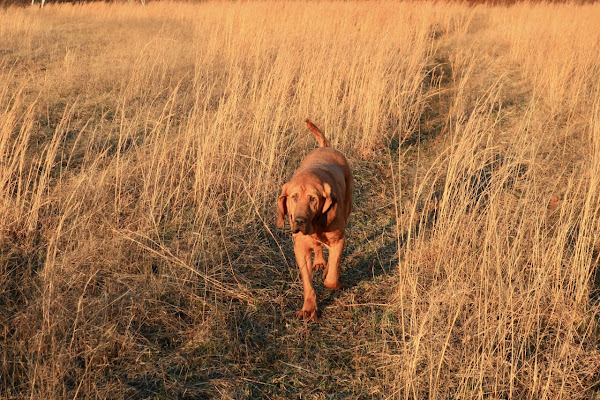 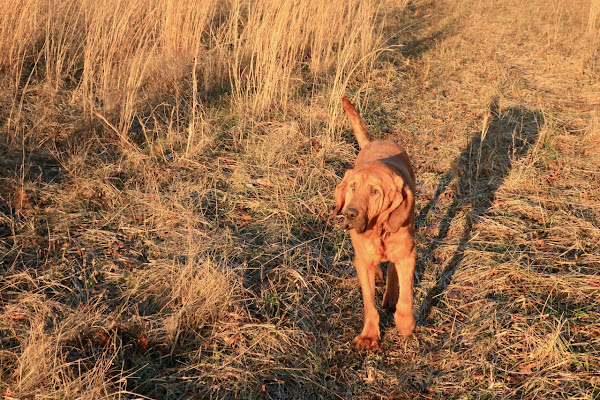 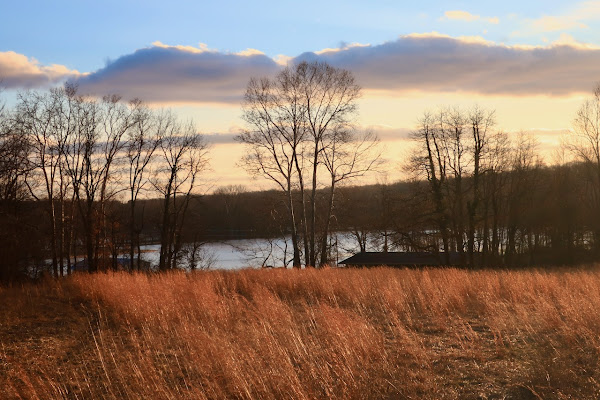 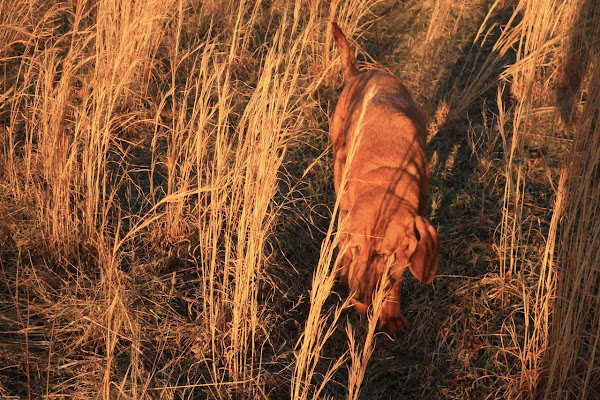 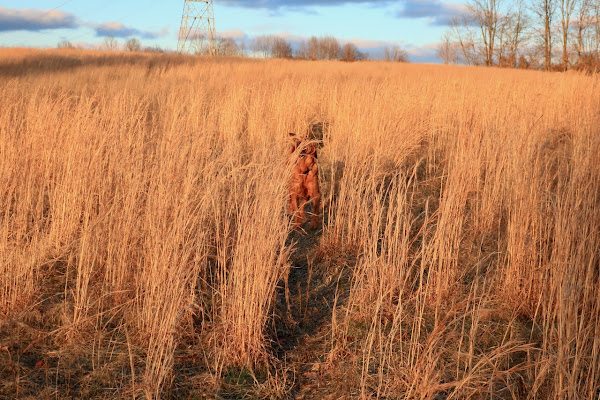 A rare sudden burst of energy as Stella hops into a trot. 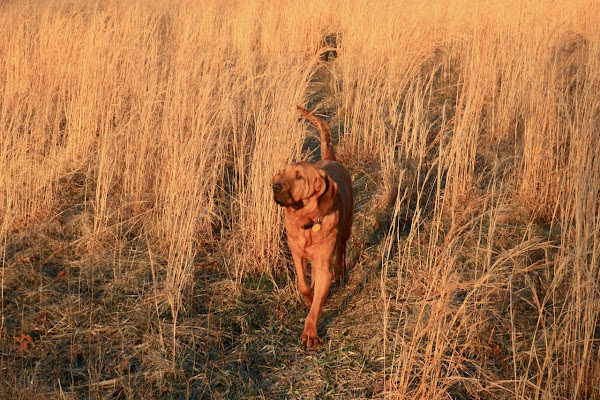 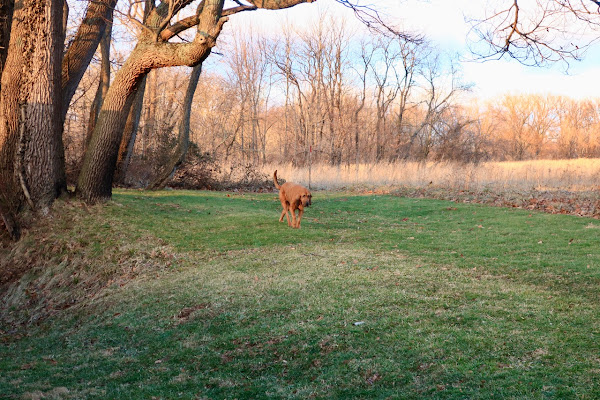 14 minutes after we stepped outside to start the walk, Heidi was in the backyard meeting Stella and I upon our return. She didn't mind the cold temperatures. Needless to say she led the way back inside. 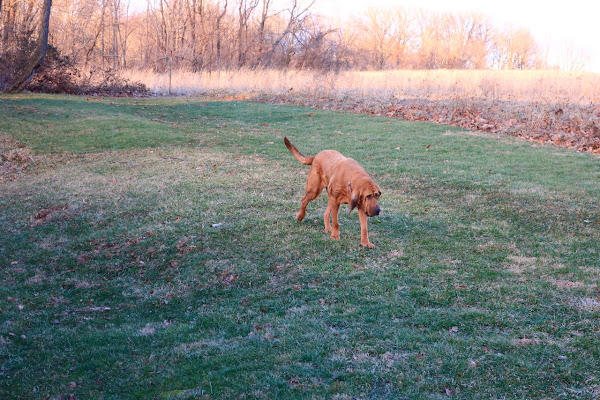 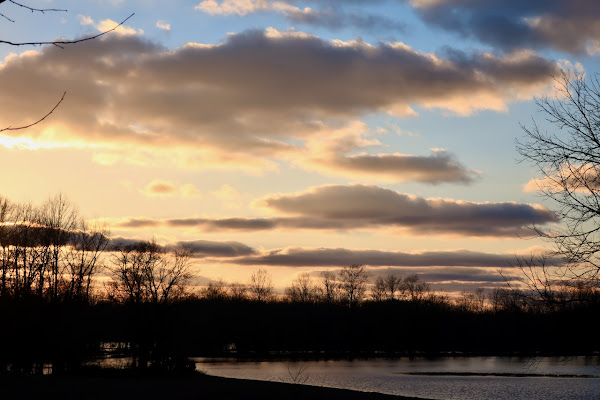 A pretty good end to a nice day. With my new political perspective I wrote about this morning I felt stress free and enjoyed what the day brought. I didn't watch that much tv today and only saw glimpses of online news. 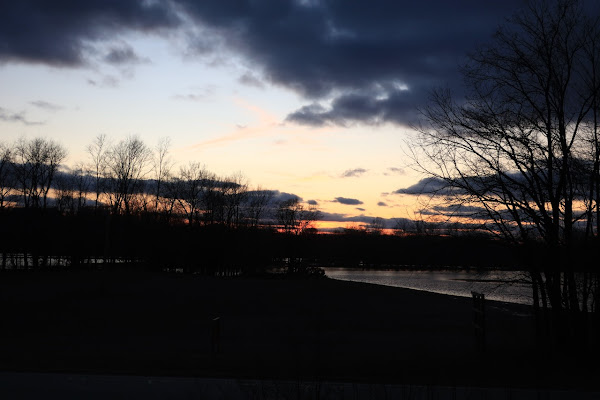 I barely caught this photo. I was about to publish this post when I stopped and went to the kitchen to get a glass of water. I caught the sun setting outside my kitchen window. I grabbed the camera, ran outside and almost missed it. To keep it real as possible I just uploaded to the blog without any editing.

Well it's another Friday night without a lot planned. I think I'll change things up a little and take DishNetwork's offer of Showtime being a free preview this weekend starting tonight. If I don't find anything I want to watch on that channel, they also have a pretty impressive list of new movies I can pay to view. I see a couple I would not mind squeezing some money out of my tight hands and pay to see a couple of them.

It was also the day of junk mail in my mailbox by the driveway. Some of it had been in there for days and survived all the hard rain. I was happy to see the "time sensitive, immediate reply requested" piece of mail survive because it has all the great deals on hearing aids .... which I do not need ... but they remind me every month ... that I might.  :)

There is one thing consistent in all the news stories about Jeff Bezos ... I have read a lot of them and in none of the articles I have read or the news about him on tv ... not once has he denied those photos are of him. He can't. From the details of each photograph that someone possesses, he took a full body shot with his face in view ... damaging ... even if he might be getting blackmailed.

No denial from him.

Oh and all of that junk mail was tossed right into my recycling container like always, hearing aids offer and all.

It was another successful day of retirement here in 'the tropics' of Southern Indiana.
at February 08, 2019