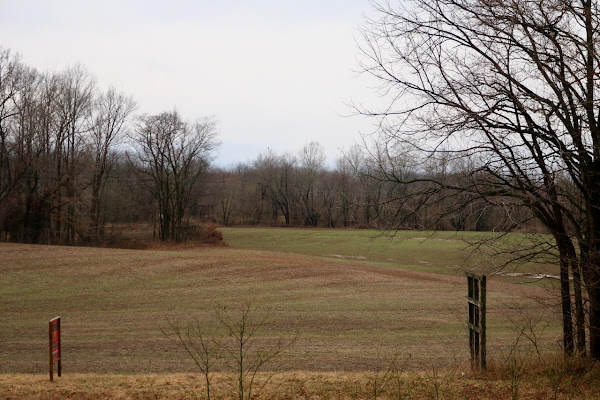 If you would have seen the local tv weather forecast last night with a tone of fear about the upcoming "winter weather" advisory, you would have expected the hounds and I would be buried under our biggest snow fall of the year. I hate "weather drama" from local tv channels to national weather experts and always take them with a grain of salt. Others go out and clear the grocery store shelves of bread, milk, and all the other packaged foods when these kind of threats occur. 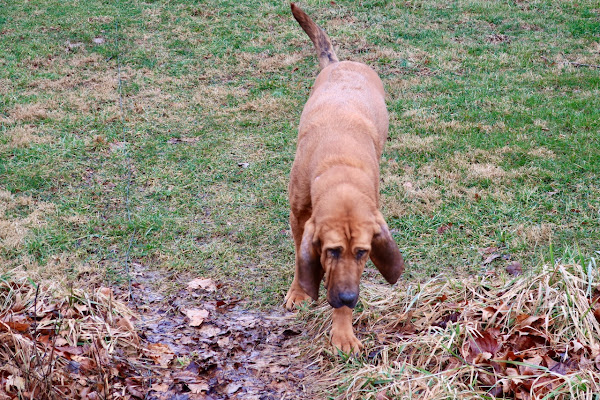 Stella and I could tell it was going to be a very wet walk this morning. Where Sadie would have been sitting in the computer room entry giving me the stare down, forcing me to walk no later than 8am ... Stella was in a deep sleep, snoring, with legs and ears hanging over the foot of "my" bed a little past 9am.

She must have known the leafy path was too wet for her liking and her first step into the field was just off to the side of the path where it wasn't so wet, muddy and slippery. 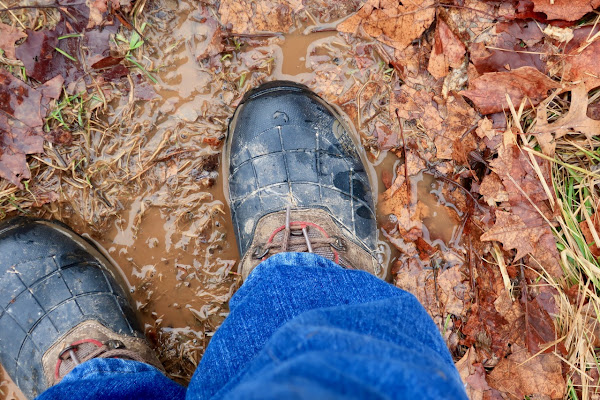 This will give you some idea what the path looked like after a night of rain, instead of all that snow we were going to get after midnight. I was expecting at least some snow ground cover when we woke up but all I saw while making coffee, the car headlight reflections on a wet highway, clear of any snow.

This is not a good sign for the afternoon walk. Rains start again at noon and are supposed to be for the rest of the afternoon. I'm glad I did not apply Scott's Winter Lawn fertilizer this year otherwise I'd be mowing the first chance the yard was dry. Ask me how I know that?  :) 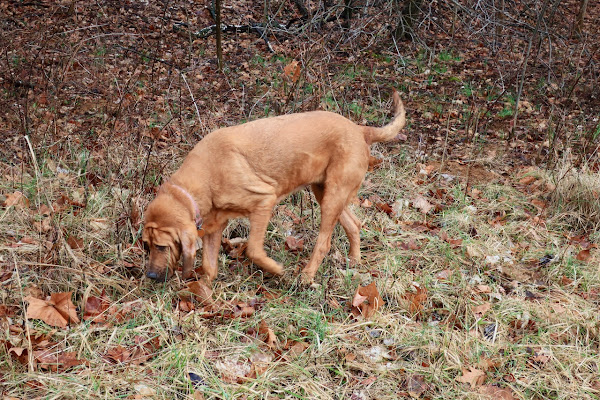 With all the rain and a wet field, Stella's desire for deer scat was nil. She spent all of her time with her nose to the ground or up in the air with nostrils moving as she tried to capture all of the scents she was finding this morning. With her being so meticulous in her 'data collection' the walk was a slow process ... at times one paw at a time. 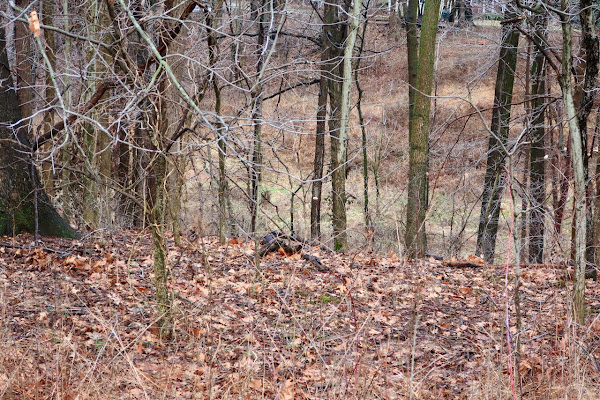 I finally took a photo that shows you just how deep that gully is behind the wooded area. The neighbors that are behind my house and behind the wooded area, sits at the very top of this photo. You can see the elevation from their yard down into the gully. Luckily over the 21 years I've lived here there have been very few times where I had to walk down into that area to go get a hound. If I remember right only Harry and Sadie checked out the very bottom of the gully. 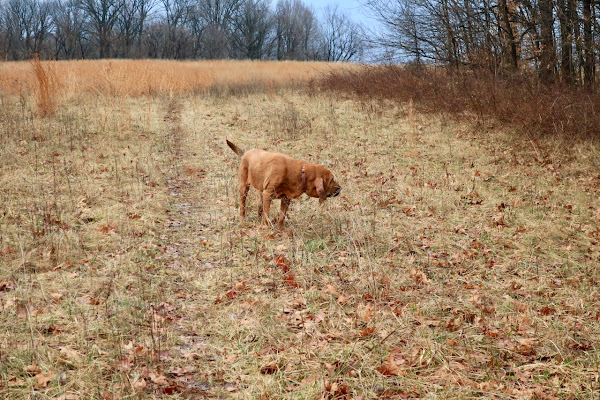 Either Stella was confused a lot this morning or she was just following what her nose told her. This would not be the first time where she would turn in the opposite direction of the walk to check something else out. Luckily this part of the path was not under water, muddy or slippery. Just very soft, but as we get higher in our 47' of elevation at the back of the field ... the path will get wetter. 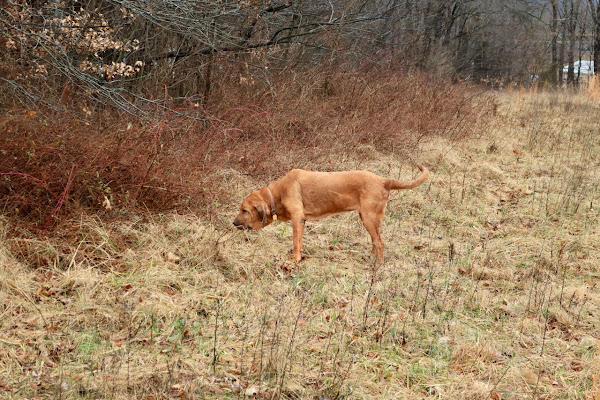 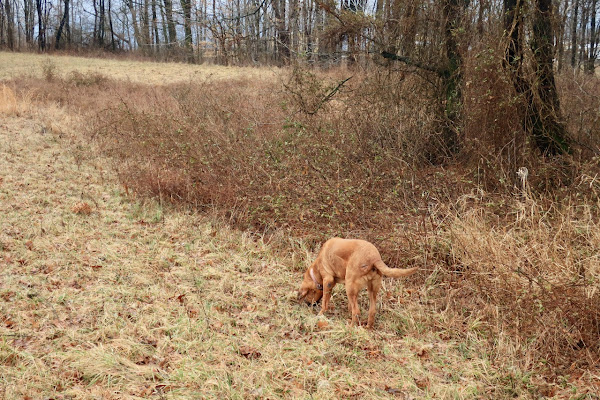 Slowly but surely we move around the first turn and the back of the field looks like it's on the other side of the planet at the rate we are walking. I begin wondering if I should have brought a backpack with a lunch inside. 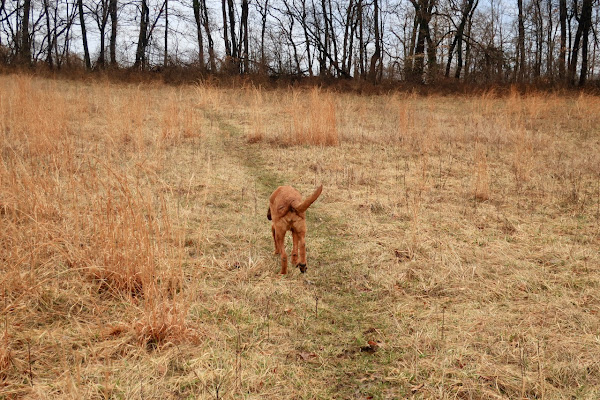 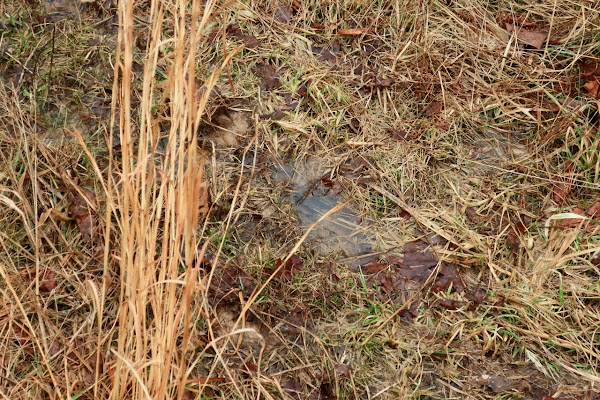 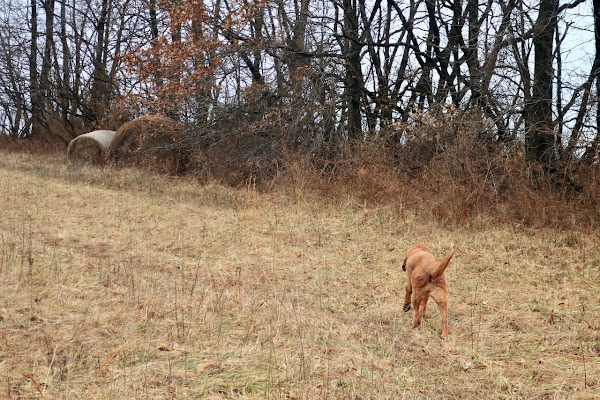 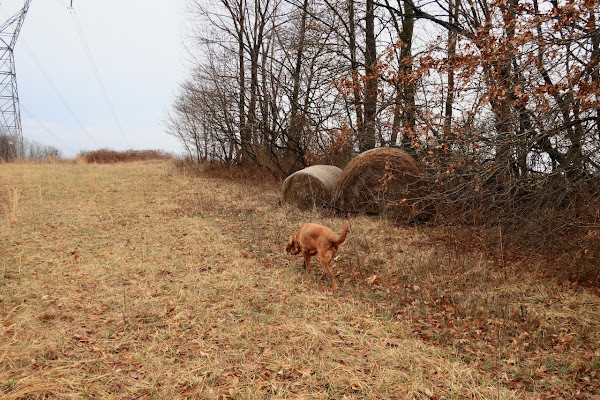 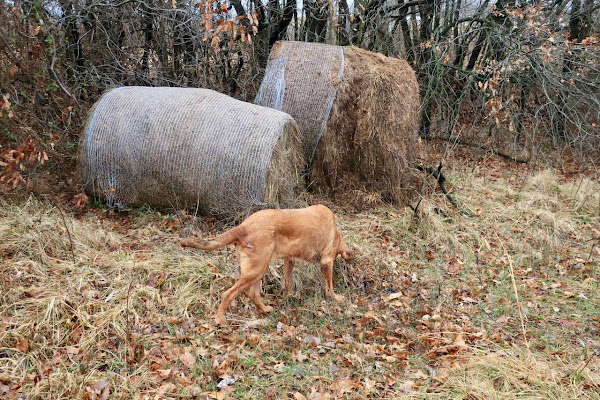 No deer scat but scent strong enough that I had to go over and tug at her collar to get her to move. 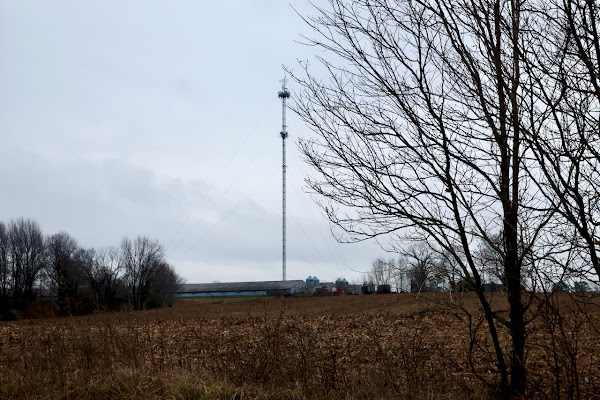 If there was any snow last night it would have been to the north of us and northeast. That is one thing nice about living in 'the tropics', we are about 75 miles south of the line of normal storm activity. That ranges from snowstorms, thunderstorms and tornadoes that always seem to follow I-70 from the west into the Indianapolis area 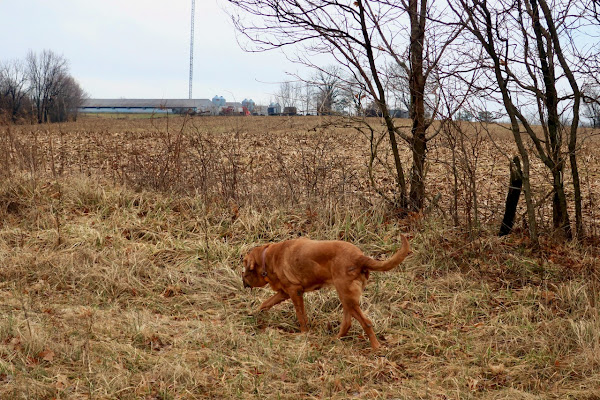 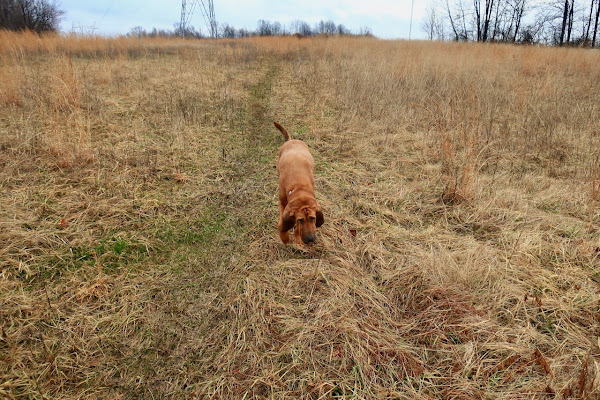 With the majority of the walk completed, Stella was still staying just off the side of the path. She was taking no chances getting her paws wet. Heidi would be tip toeing, Sadie would have charged through puddles and mud, Winston would have strolled on the path no matter how wet ... but Stella ... always bypasses any kind of ice, water puddles or over saturated paths. 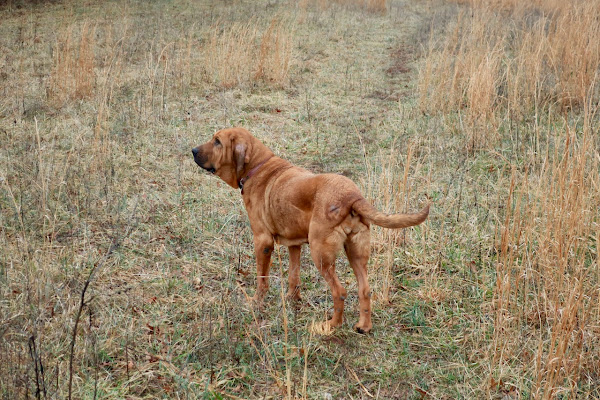 Again ... reversing her stance in the opposite direction she was walking. 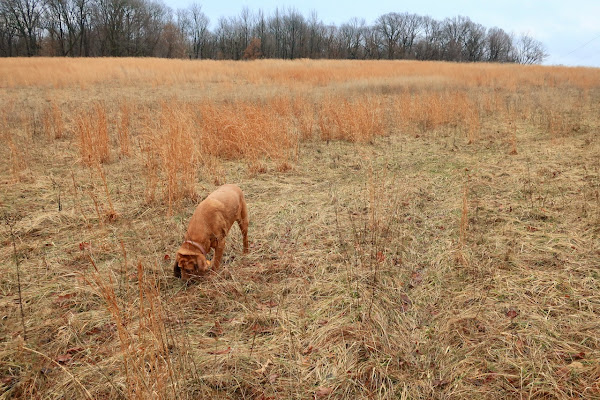 Just because I took a left at the "Y" you can barely see, using the old way home doesn't mean that Stella was going to follow me. She gradually veered toward the same part of the backyard we always enter at the end of the walk, the north part of the yard. 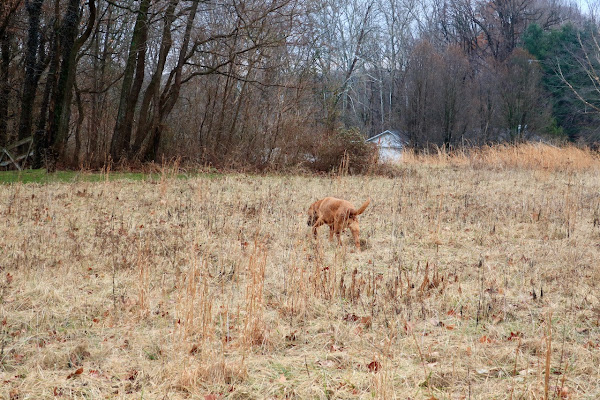 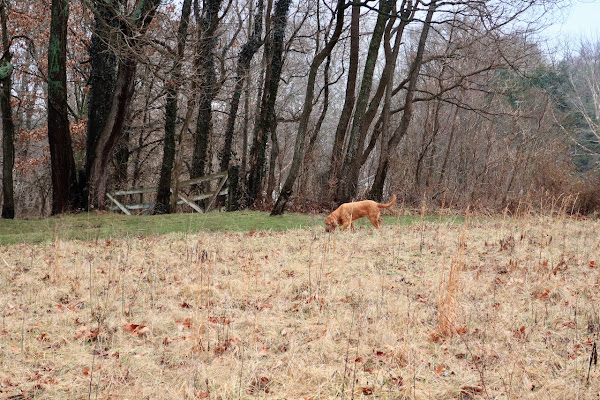 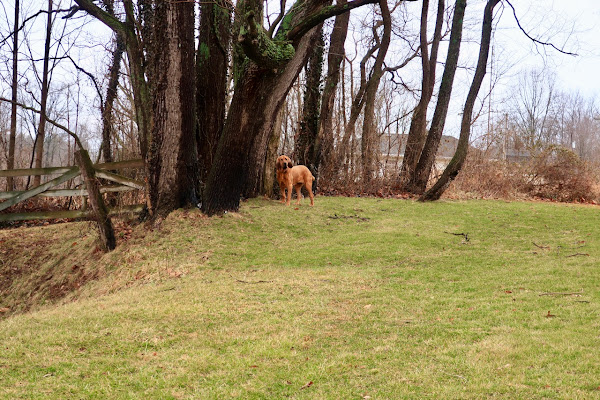 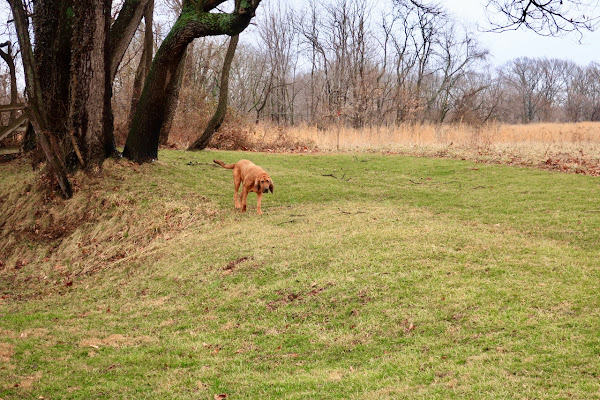 I checked the battery icon before we left and it looked as if we had plenty of battery left for the walk. Right after I took the 2nd picture on the walk this morning, the battery icon turned red and was flashing at me. So I turned the camera off and on between pictures during the walk and made it all the way to here. Right after I snapped this picture, the camera went dead and the lens retracted automatically. Perfect timing.

With rain predicted it will be another day inside. I am back to reading the huge book about Steve Jobs. Over the years I have tried multiple times of reading that book but have never completed it. I might find something else on my shelves that interests me. I do know one thing for sure ... I will NOT be reading the book by Andrew McCabe.

In my opinion he and others should be in jail not doing book tours. James Comey included.

This afternoon might be time to finally post my review on the Apple Watch Series 4 I bought January 4th. It does so much that I had to turn off some notifications and over the 6 weeks that I have used it I have fine tuned the information it provides into only what I want to see.

I still claim it's the best electronic device I have bought since my first desktop computer in 1995. I saw the other day that 1 in 4 adults now wear a smart watch of some kind.

Vegas gives Trump 3-2 odds of winning. Harris is second at 8-1 and I think it was Bernie in third place at 10-1 odds. You may not remember or know, but up to the final day of the 2016 election Vegas oddmakers had Trump winning the 2016 election from day one, no matter what the tv political polls said.

Heidi has just woken up at 10:41am and strolled into the computer room where the water dish is located for her and Stella. She likes to hydrate herself right after her morning nap. When she is finished with 'inhaling' water, she will then move to her position on the couch for more sleep until lunch is served.  LOL Yes, I'm serious ... that is her daily routine. Plus she never stops for air while drinking water ... it's nonstop.

I feel much better than I did this time yesterday. Maybe I have flushed out that illness with all the water I have been drinking the past few days.

It's warm and wet here in 'the tropics' of Southern Indiana this morning.
at February 20, 2019