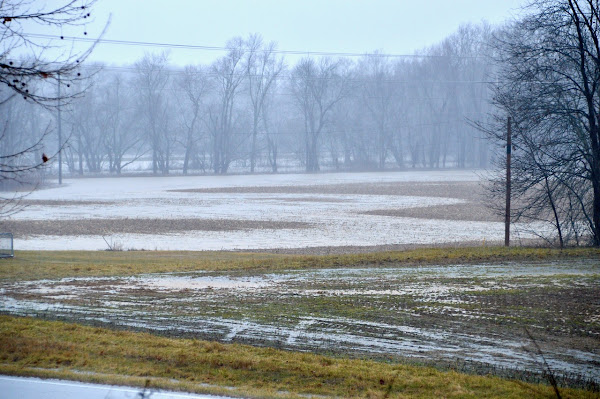 What little flooding I showed you this morning (Thursday) was not even a "drop in the bucket" to what happened only a few hours later on Thursday. It rained non-stop from the time I published the Thursday post but around 11:30 it turned into a torrential downpour. It was not the first time I've seen rain like this but it always makes me wonder what might be damaged during times like this. I guess I'll find out later. 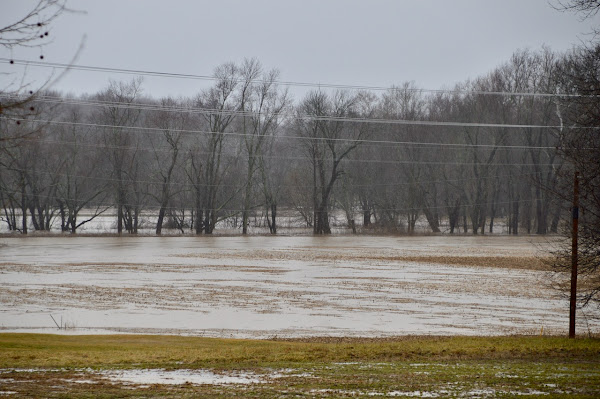 It took only 30 minutes for that same field to look like this. But ... I've seen it completely submerged before. 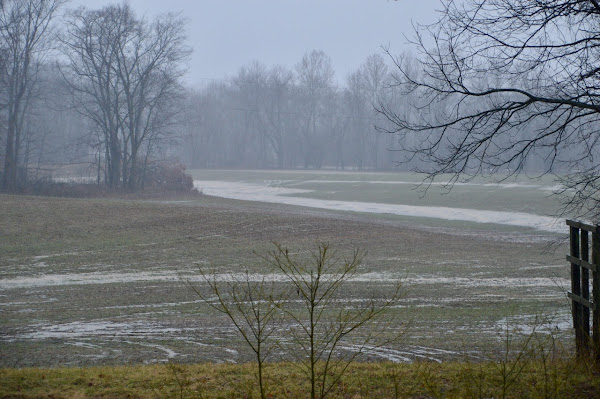 You will not believe there is a huge drainage system under all that water, in that exact spot crossing the field. The system is just overwhelmed with the amount of water coming down plus the flooding from that small creek behind the field. 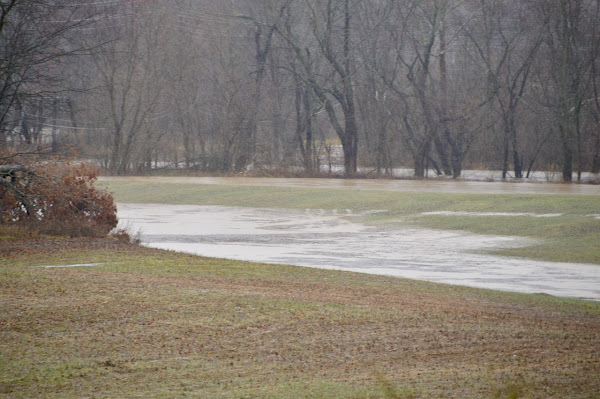 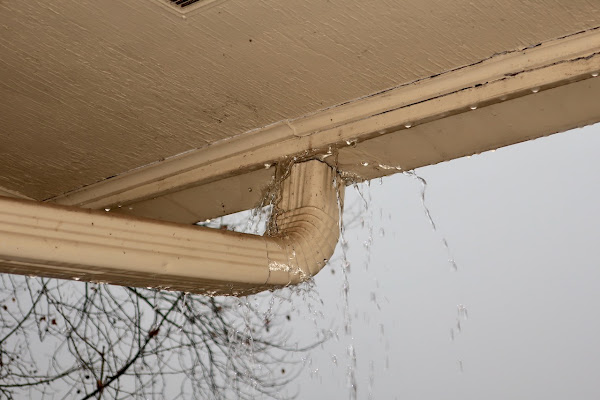 No, the gutter is not plugged with leaves or stems. It's clean and clear as well as that downspout ... there is just too much rain for that amount of space. "Busting at the seams" as some would say. 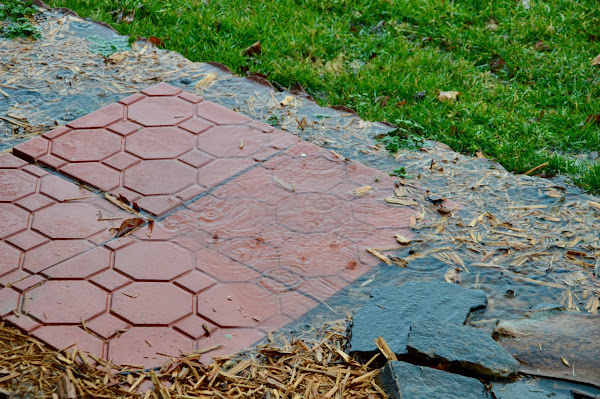 You will not believe how fast all that water gone later in the afternoon. 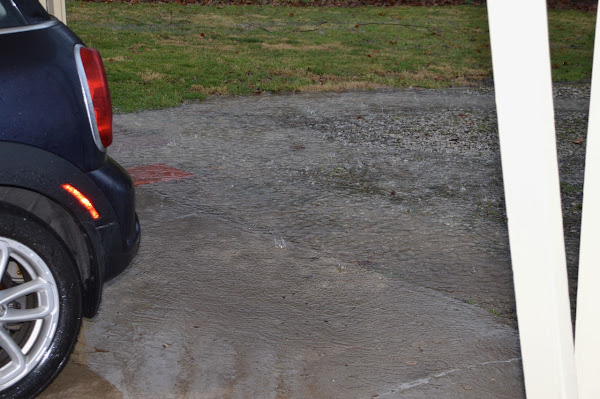 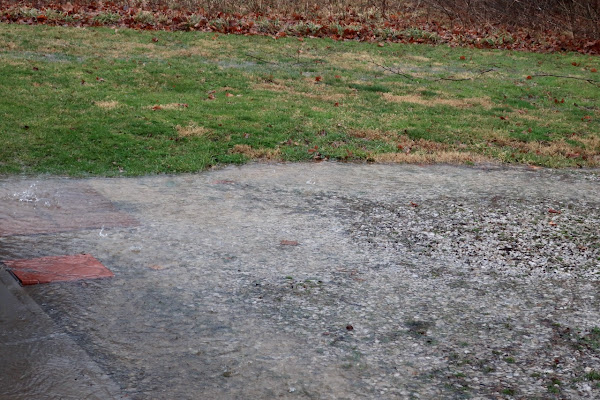 There was no way Stella was walking out in this. 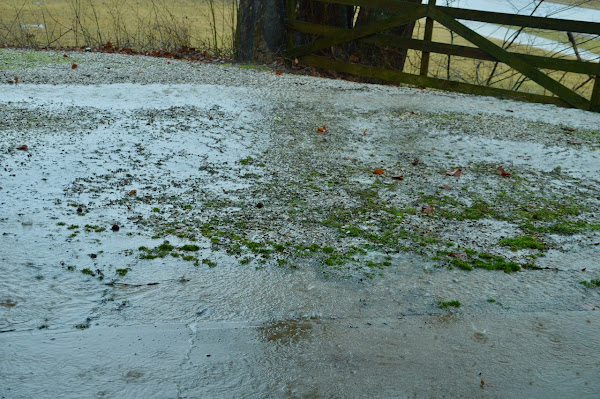 The water is running down the driveway as it should ... no problem there. 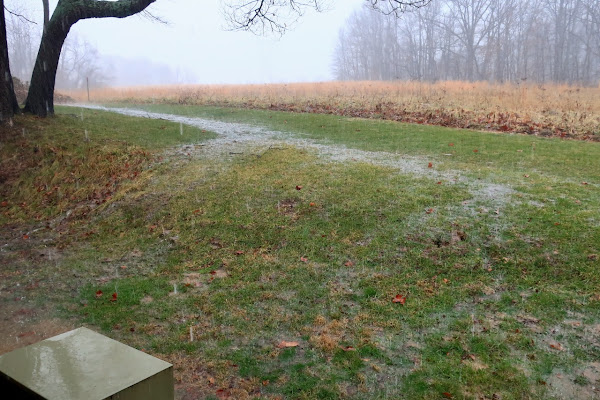 This is a problem that I'll have to fix once it is warmer. Someway water from the field is running down the center of the north yard, making that sharp right hand turn right toward the house. I never noticed water in that part of the yard when it was full of overgrown brush, a few small saplings and tall grass like the field. It might have been a huge mistake clearing that part of the yard out 5 years ago to plant grass seed and make it part of the yard. 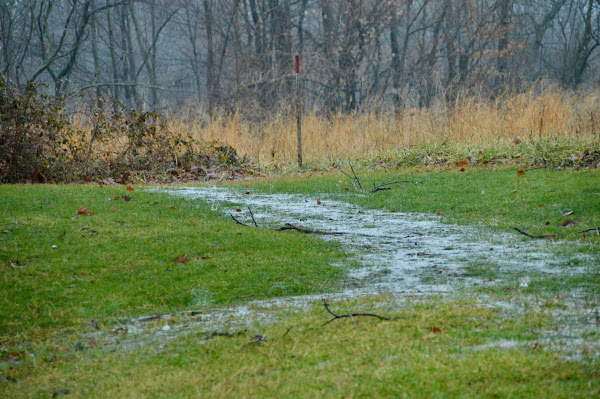 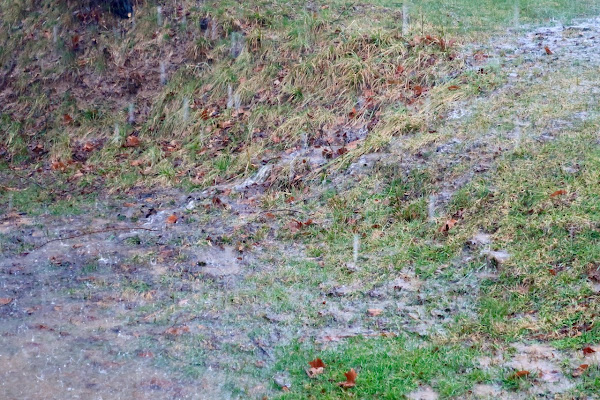 It's like a river rolling down that small incline. 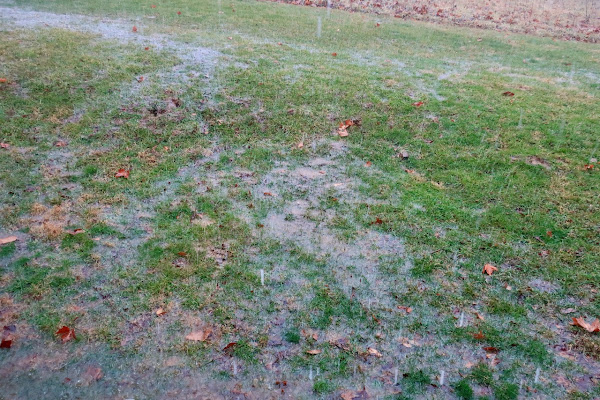 A little further south, on an incline ... it's been a long time since I have seen this part of the backyard flooded. 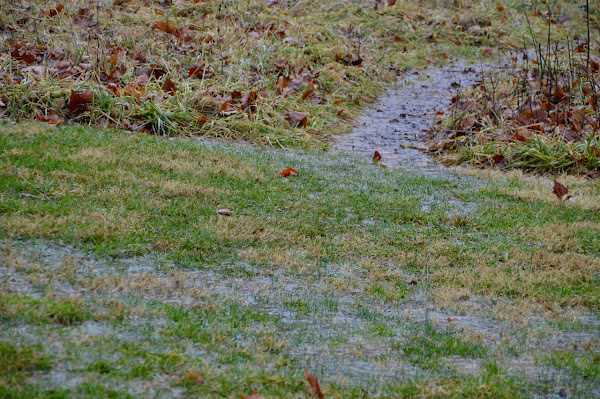 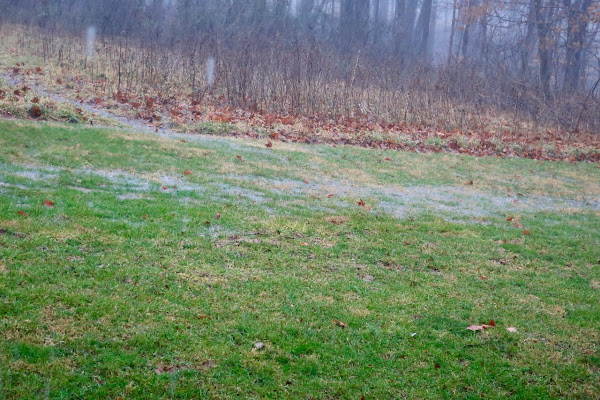 It looks like Stella's morning walks will be canceled for weeks looking at that picture but with temperatures dropping to 15° by 7am Friday, it will be all ice by the time we wake up. 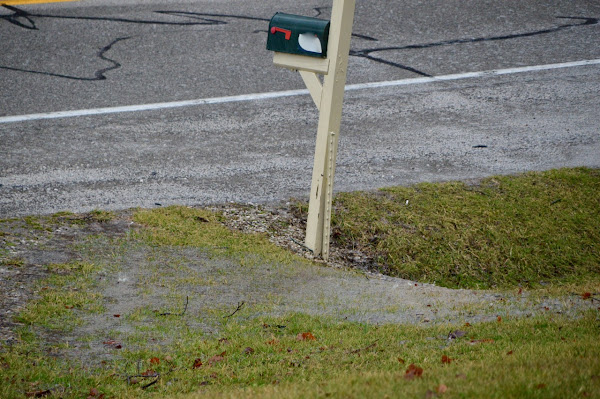 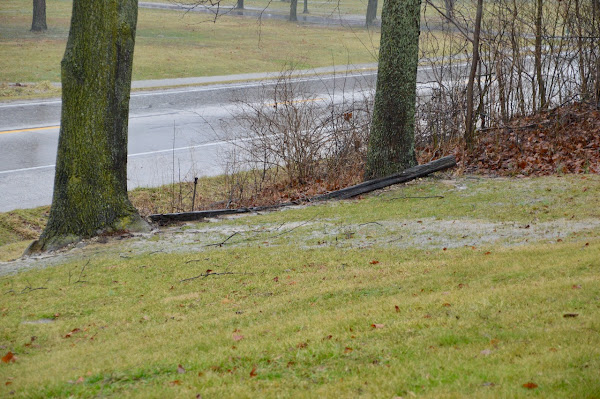 Water in the front yard is coming from the flooded north side yard, running toward the culvert next to the highway. 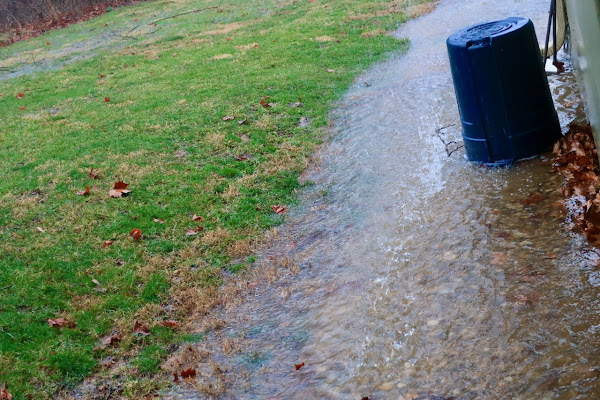 The drainage system running the length of the house on the edge of the yard and river rock is simply overwhelmed. I don't have a basement but a 4' crawl space. I'll be checking the foundation from under the house once the water clears and the temperatures warm up. 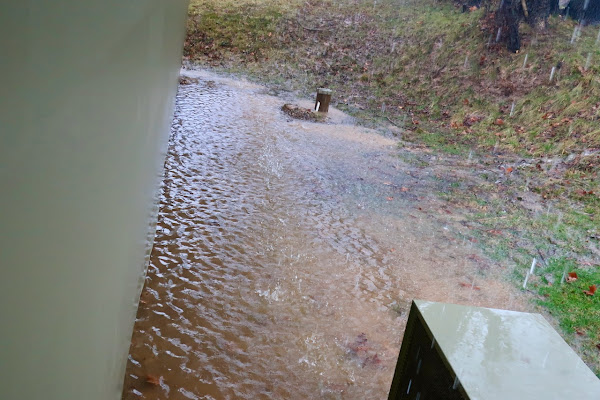 Yet ... by Thursday night almost all of that water around the house was gone. I'll take more photos of this area Friday morning.

When I selected all of the flood photos, many more not posted, and made a new album in my Apple Photos program ... I labeled it "Storm 2019" ... once it sorted itself on the sidebar it showed these kind of floods have happened about every 5-6 years. Below are some photos I took in June 2013. 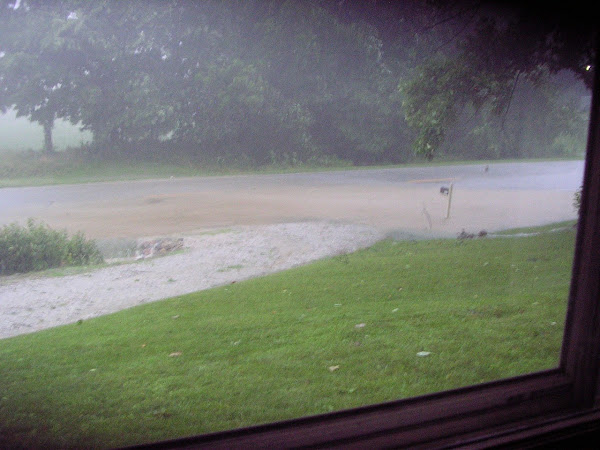 That June storm in 2013 had a lot more rain than today ... even the highway was underwater just a few hundred feet south of my driveway. As you see the area around my mailbox is under water. 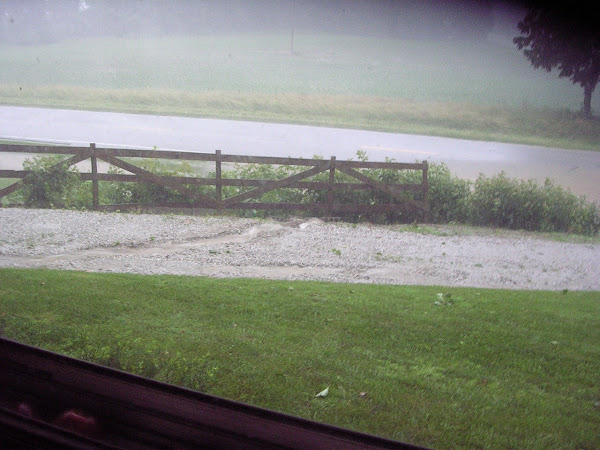 The water cut through hard gravel and headed over the bank. 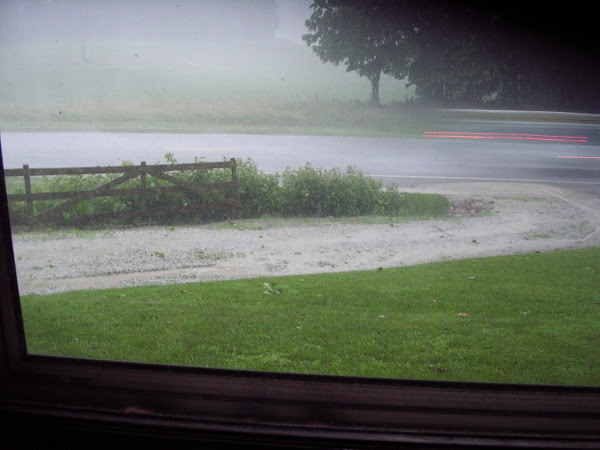 So as I sit here 'Thursday night' or 12:45am Friday ... it's down to 26°, the wind is howling outside and blowing freezing cold air. I have no doubt it will get to the predicted 15° with no problem. Stella and I might be skating on Friday morning's walk.

Some heavy-duty weather extremes happening lately here in 'the tropics' of Southern Indiana.
at February 07, 2019