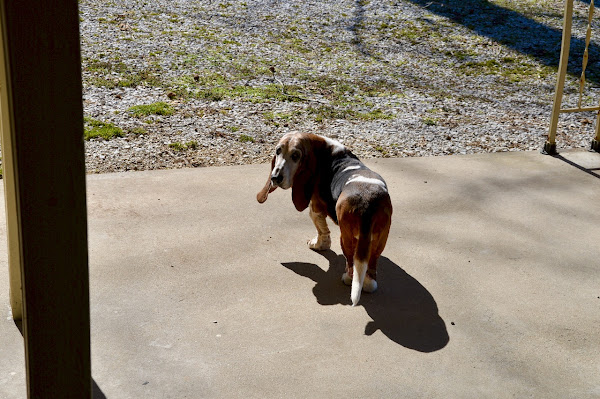 It wasn't Stella this morning. It was me. I was up and awake before either hound woke up all because I went to bed last night at 9pm almost out of boredom. I used my Nikon D3200 yesterday afternoon while the Canon battery was charging. These first two photos are from the Nikon. It is sunny again this morning so that is good. Black coffee, no sugar for the 4th day in a row, that is also good. Not sure what today will bring but I'm feeling it will be a two post day about the hounds. 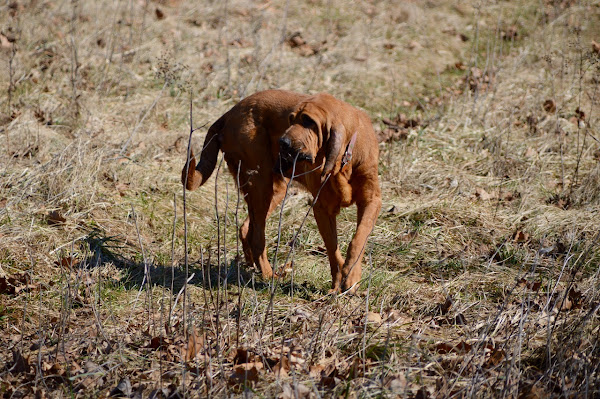 Each camera takes good pictures in their own way. I'm guessing these cameras may last for many years to come. I have never been interested in keeping up with all the advancements in cameras like I have with the iPhone. I don't even replace my computers until they break. My last iMac lasted a little over 7 years. 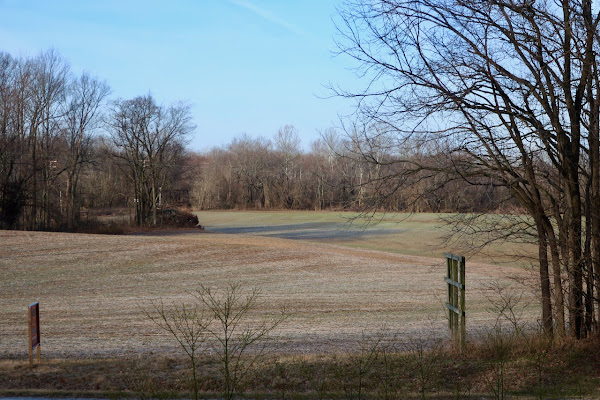 It was just barely touching 30° this morning depending which device I looked at. Watch and iPhone said 28° and the old carport thermometer was showing 35°, which is a normal difference with temperature comparisons year round. 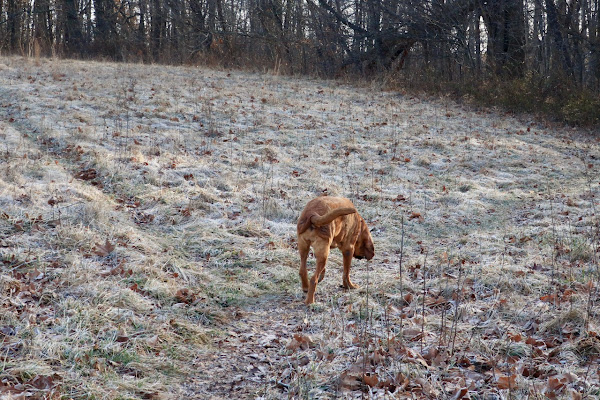 The ground was hard but not what I call rock hard. The frozen leaves fill with past rain were soft with each step I took. I was in for a surprise this morning and I am hoping it's a new routine for Stella. She walked, and sniffed but never ate anything this morning ... that's always makes the morning walk enjoyable. 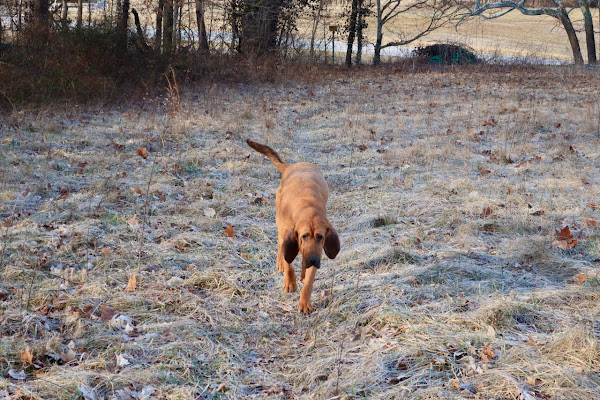 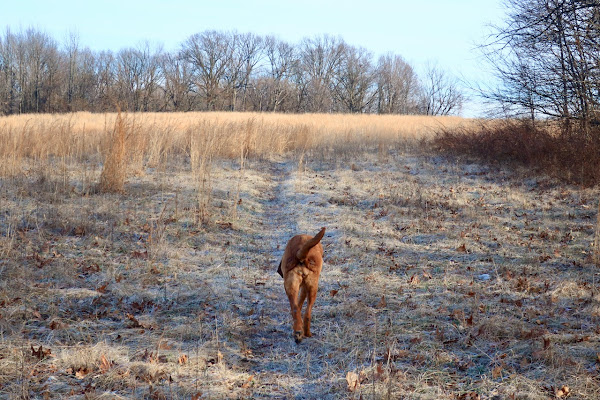 In fact she stayed on the path for the majority of her walk just like she does in the afternoon. What had gotten into her? 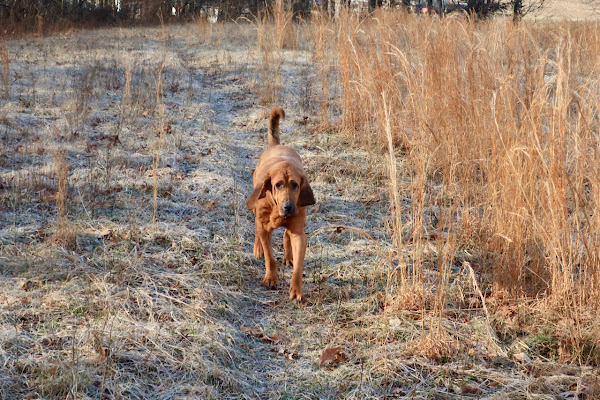 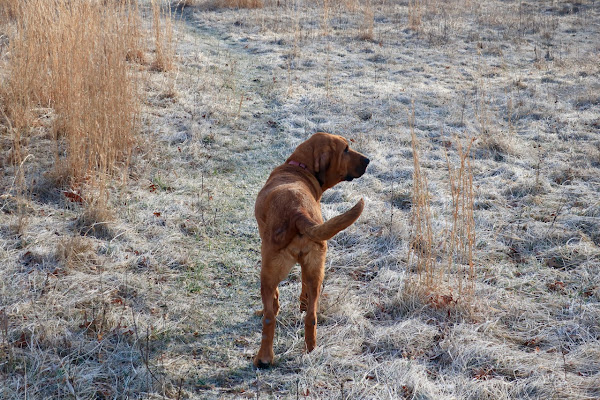 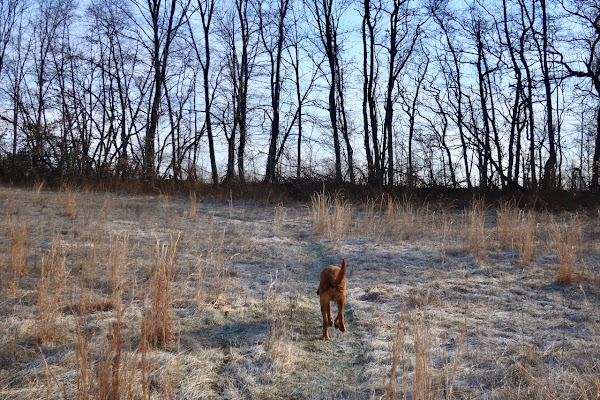 It wasn't as much as yesterday morning but she did trot a few times, kind of like a gentle jog. 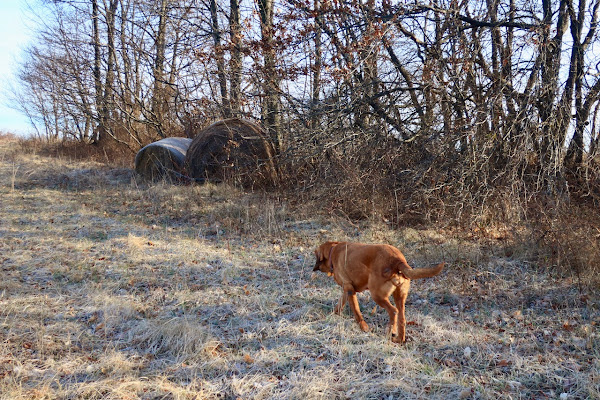 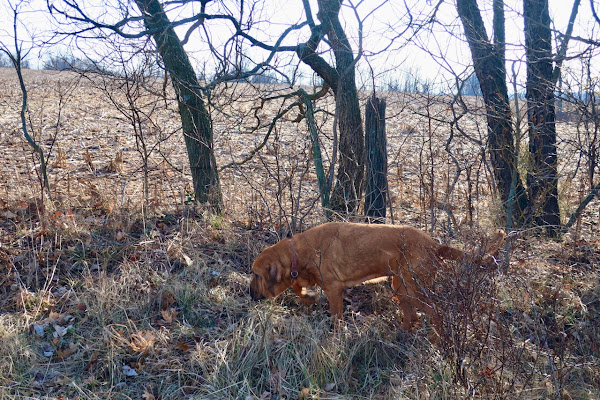 She was pretty sure she had tracked deer up along the fence. I have seen more than a few scared deer jump that fence when Sadie was chasing them. As the fence moves north it is mashed down enough that you can barely see a fence along the edge of the field. 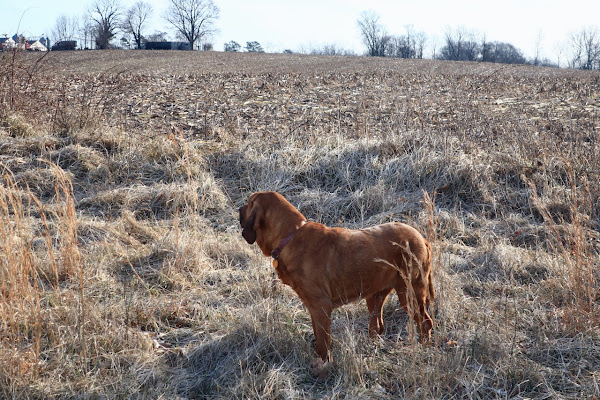 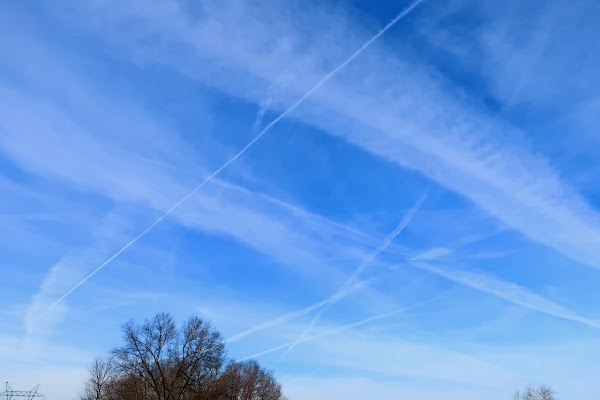 The sky was full of contrails this morning. 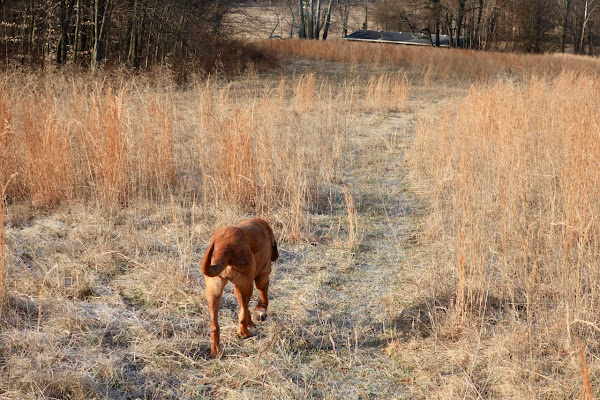 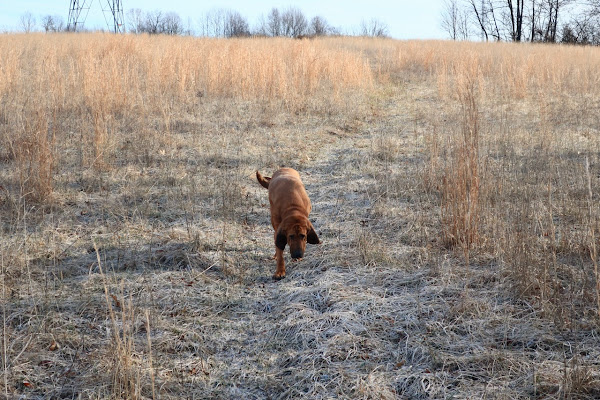 She stayed on path all the way. I walked and took pictures of her, almost in shock 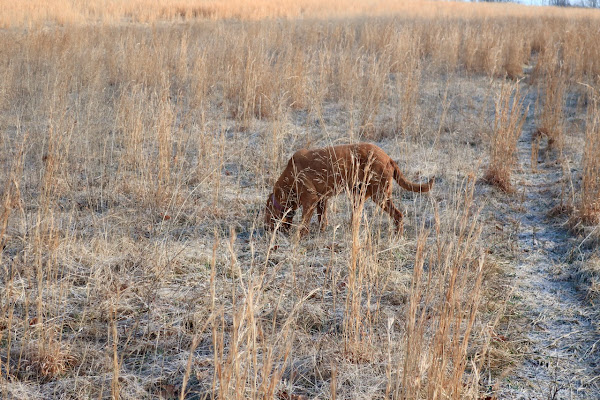 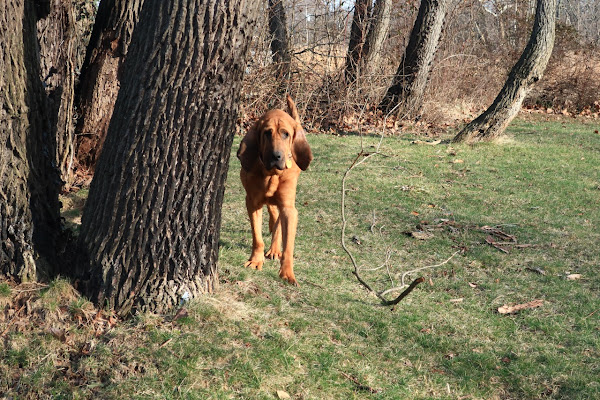 Some of the wind damage just to the left of her. If that is the type of limb I have to pick up after heavy winds, I'll take it. I have quite a few limbs to pick up about that size. They will be dry enough to burn in a few weeks. 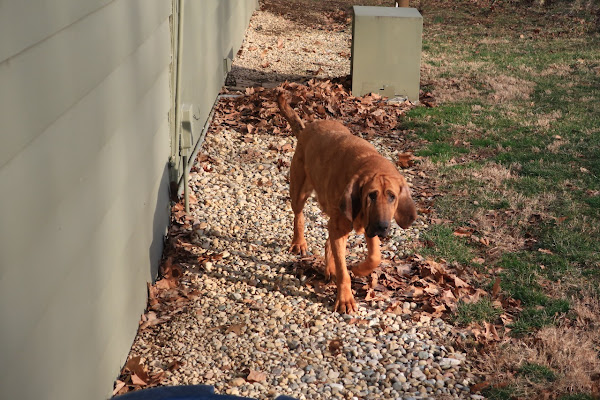 Another morning, another walk in the books. Any ideas what I could do with the area the river rock occupies? I am willing to dig all of it up if someone has a good idea. One thing I will be doing for sure is digging up the old 'plugged up' drainage system I have underground that is on the border of the yard and river rock. I installed it many years ago and is no doubt plugged up after seeing the standing water a few weeks ago. I'll rebuild the tract and install new corrugated drainage pipe if needed. 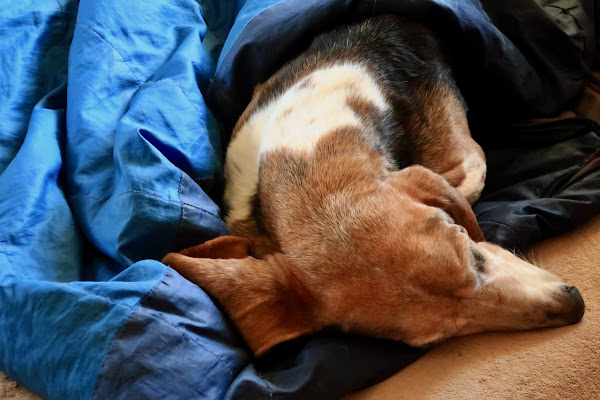 Near freezing, would you expect anything different from Heidi this morning???

I thought I was going to ramble about nonpolitical stuff this morning but I have lost my train of thought and cannot remember what I wanted to say. I have had the tv off the past few days and that has been a welcomed change. I also do not miss my Facebook account that I deleted a week or two ago. I go back and forth on that this past 8 months but I think I have finally 'kicked the habit' and will not return.

After starting my 4th day on the Keto 'Lifestyle" I do feel different. As soon as I eliminated granulated sugar in my coffee I no longer felt bloated after my second cup of coffee in the morning. I have kept my carb  intake below 50g every day and have noticed I have no urge to eat. I was always hungry before I started my menu changes on Saturday.

Two of the past four days I have eaten less than 1,000 calories in a day without intentionally trying. I'd like to eat at least 1,200 per day but less than 1,500. Keto say not to worry about calories just don't eat a lot of carbs.

I am thinking of starting a new spreadsheet listing only my weekly weight, daily carbs, fat, protein in grams. I could have weekly averages and monthly averages. Insert a chart to show progress with each category having its own line of data. I think a spreadsheet would give me more data to see than just a daily journal entry.

Do I crave carbs???  Yes I do. Things like pizza, burritos, cereal, oatmeal and a sweet potato. After I complete this 30-day plan (my own), I'll add some of those back into my menus but on rare occasions. I have also stopped eating bananas and apples during this 30-day plan. I want to follow the Keto plan as strict as possible for these 30 days to see what kind of results I get.

My friend sent me two newspaper articles this morning from his local paper. It had some interesting news I would have never expected. The journalist, Jamal Khashoggi, that was killed in Saudi Arabia, was an undergraduate of Indiana State in Terre Haute Indiana. That town also has another distinction ... they have named every President before the elections correctly since the 1940's. Yes, they even picked Trump when others thought he had no chance.

The second bit of news was from the small school, the University of Evansville. With an enrollment of 2,100 undergraduates, Oscar Winner Rami Malek was a 2003 graduate of UE. He actually came from Los Angeles to Evansville Indiana to study acting at their acclaimed theatre program.

Evansville Indiana also has a history of famous sports figures at the professional level. There are many of them but here are a few of the players that were famous in their playing careers.

I know there are many other towns in the USA just like Evansville where famous people from all areas of life grew up. It's just amazing sometimes to see so many of them in this area.

After starting that new spreadsheet I am going to put some daily menu ideas together so I don't just 'nibble' throughout the day. Baked salmon and steamed broccoli will be the feature for today. What's nice about retirement, I can eat dinner in the middle of the afternoon if I want.  :)

Sunny, cold and clear here in 'the tropics' of Southern Indiana.
at February 26, 2019