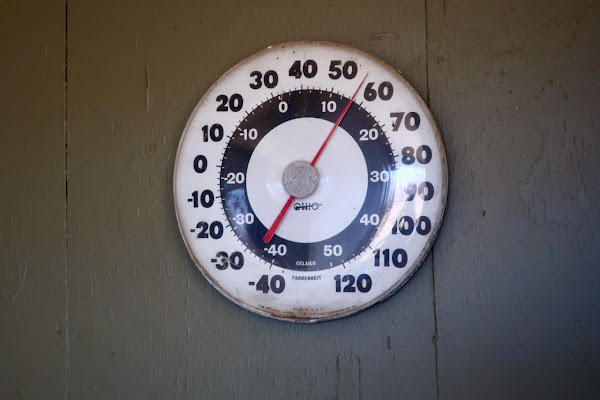 I was more in disbelief of the weather Sunday afternoon here in 'the tropics' than the Super Bowl game. This was the temperature around noon but by the end of the day we had broke the all time high record with a 64° day. Winter returns on Friday.

Listening to sports talk radio today, seeing headlines on online sites, reading through my sports Twitter and all the "retweets" ... the general feeling was Super Bowl LIII sucked from the game, the halftime show, the commercials, EVERYTHING !!!! 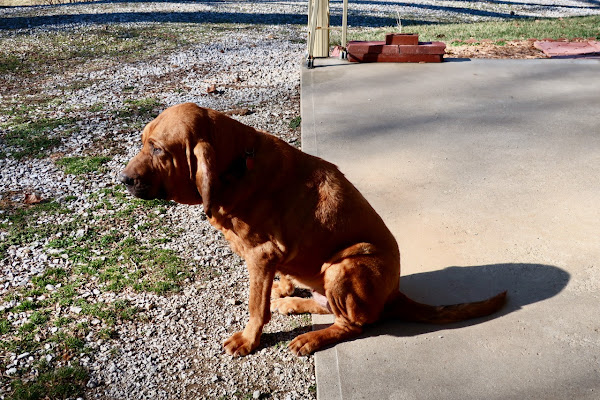 The hounds sat and thought about what they wanted to do after their Sunday lunch and basically did nothing outside of their normal routine. They sniffed the air, looked around, sat and thought, then turned toward the door to go back inside. I returned to my books and knew by 1pm that I would be watching the game but not turning on my tv until they actually kicked off to start the game. 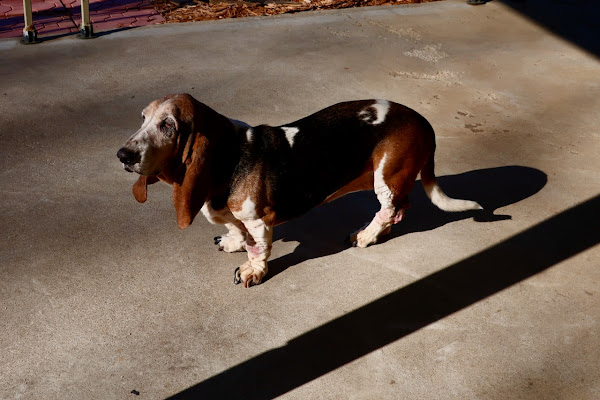 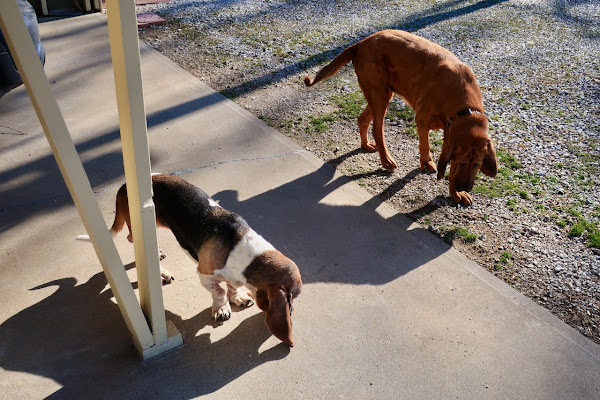 Since I like a defensive type football game in the NFL or College level, I enjoyed last night's game even if a team I dislike won. The icing on the cake was who was named the MVP of the game. They never mentioned one time during the game, that he was suspended for the first 4 games of the year for PEDs. If he had been in MLB he would not only been suspended but would have been ruled out of any playoff games and the Super Bowl. You can read about it here: 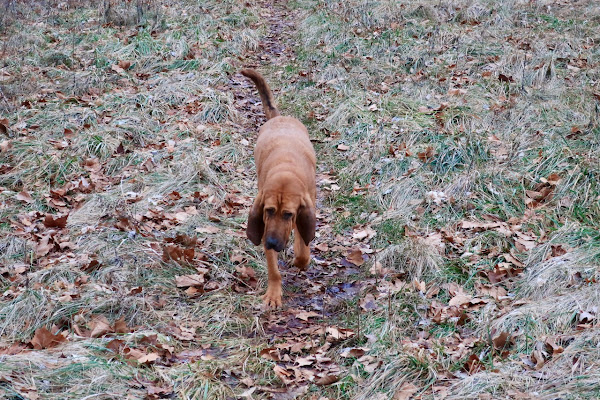 This morning felt like a Spring day. So much that it was almost scary and looked like an overcast April morning with thunderstorms in the afternoon. We will get rain this afternoon but not the spring type thunderstorms. I was back wearing my ballcap instead of a sock hat, no gloves, and a light jacket instead of the down parka. It was beautiful.

One of the local sports talk hosts had seen one of the performers of the halftime show play in Indianapolis last May and said last night it looked as if they couldn't wait to get their show over with and get off the stage. He said last May they were a fantastic show.

One key thing he said about the halftime show was "if you have to bleep out language, why is that guy performing in the Super Bowl?" Different group than the previous paragraph but I can guess which one based on the commercials in the first half of the game. Twitter was on fire during and after the game last night. A lot of hate going around and it's just not all about football either. Some idiots were mad because the game was not political enough !!!! 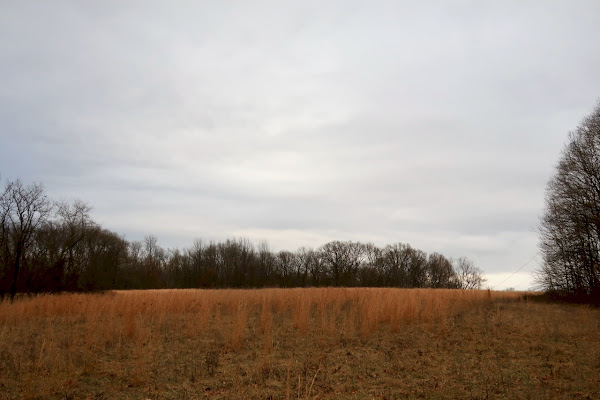 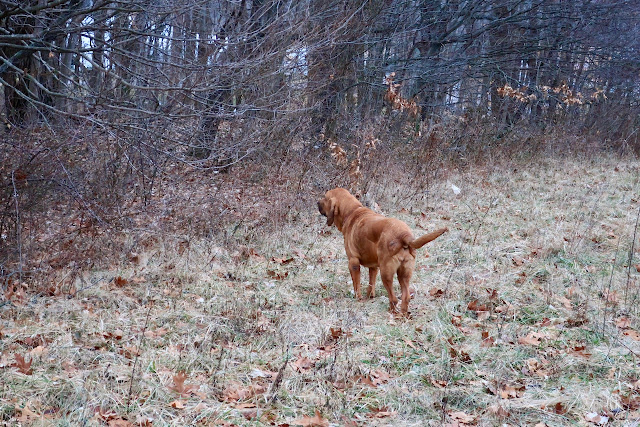 Stella wasn't sure where she was going or what she was going to do on this walk. She ended up following a narrow deer path along the edge of the field in such detail that she was walking around and through the single deep red vines. She followed that path almost to the first turn.

I turned my tv off during the halftime show. Yet I watched not only every play of the game but all the commercials. They didn't seem as good as they did in past years. Maybe it was just me or have the expectations for even those now gone off the charts where companies are in a no win situation no matter how much they pay for 30 seconds? Nothing is ever good enough in this politically correct world. 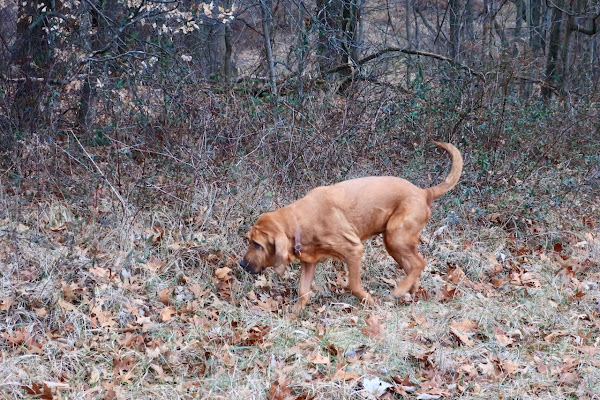 Since it seems as if I finally have my Canon G9 X camera adjusted correctly on the Manual setting, which took place a few weeks ago, I rarely have to edit the photos now. The Auto setting showed me yesterday with that photo of Heidi above that the colors are too saturated, the lighting is too dark inside or outside. So I shoot most photos, if not all, in Manual mode and Auto-focus. 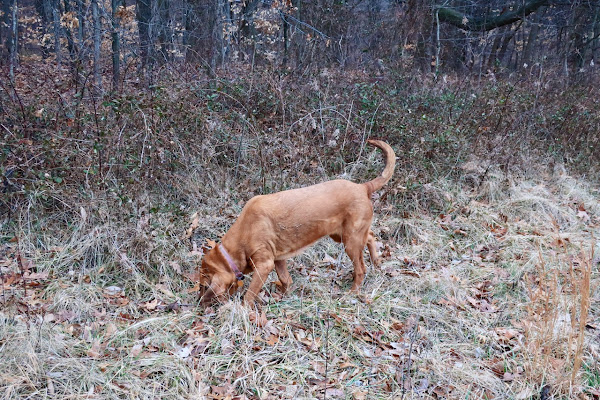 I ran out of eggs Sunday morning, oatmeal last Friday morning ... a sure sign I needed a grocery store run this morning if possible. So to fit into Stella's nap time and not in the range of eating ... I left right after the morning walk, especially since rain is a 90% chance after 1pm. At Walmart I found 14 cashier aisles available and ONLY ONE OPEN so for a few minutes I was an unpaid Walmart employee, checking out and bagging my own groceries. How soon will it be before Walmart hires robots to check people out? 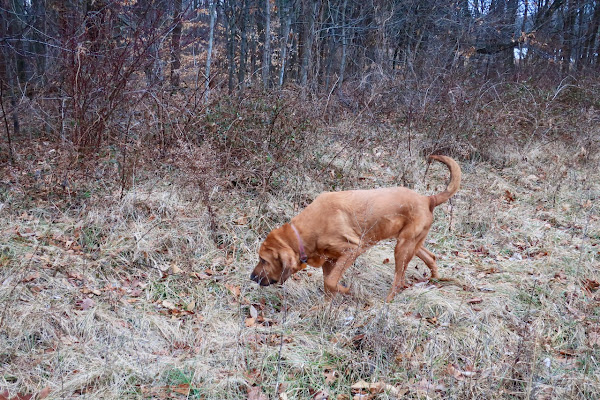 After I returned home the weather was so nice I opened the storm door screen, opened the computer room window and the bedroom window. How nice to smell some fresh air and the sound of a misty wet highway as the traffic passes the house. I changed from a long sleeve insulated shirt/fleece to a t-shirt/sweatshirt, cotton socks instead of the wool socks. I caught myself counting the days until spring. 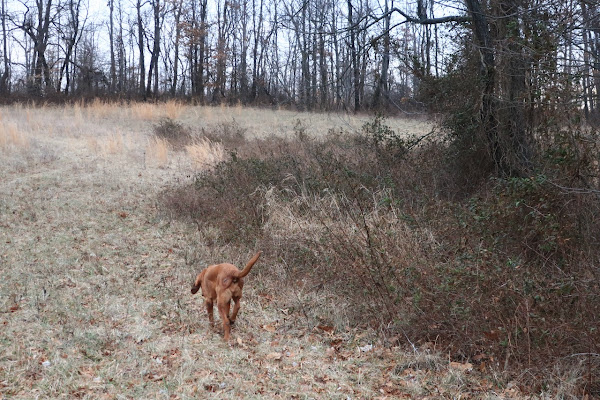 My eating habits continue to stay improved with 1400-1600 calories per day. No processed food, fewer cravings for chocolate or cookies, all fresh fruit or veggies matched with a steak, chicken or salmon. I shopped the same way today so I might have made the final turn onto a possible permanent path for healthy eating 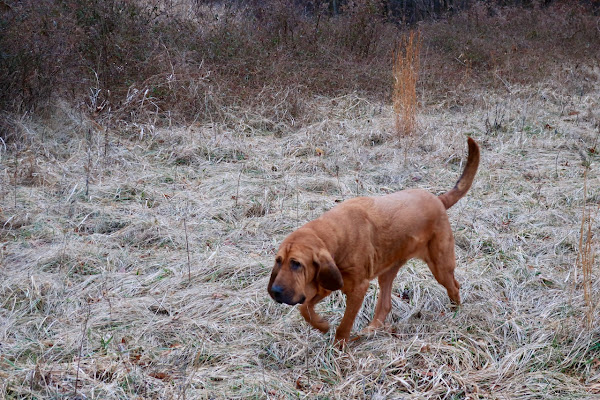 In my blogging career I have disappeared for a few weeks, even deleted my other blog a few times and came back but I always wonder when a few people I follow disappear for months or years. Just recently after starting this blog, a blogger named "RetroRoxie" helped me out a lot with html code to paste to the CSS editing block. We emailed back and forth about dogs, blog ideas, and the codes for design.

She was my blog leader in making comments for a while and has disappeared. Her blog has not been deleted but her blog domain name shows an error message that says it will not connect to the server. I know she was going on a European vacation so maybe she took a longer one than I assumed. I have never seen an error message like that when a WordPress blog is deleted.

She had a great blog if you grew up in the 60's or 70's, with pages filled with old music, tv shows, products, or people. If anyone out there knows anything I'd appreciate if you could let me know what happened to her blog and if she is okay. 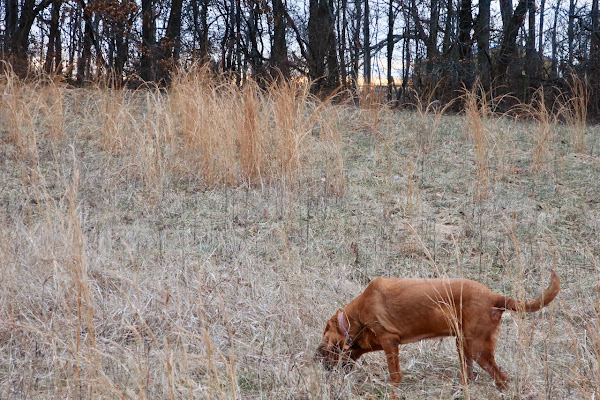 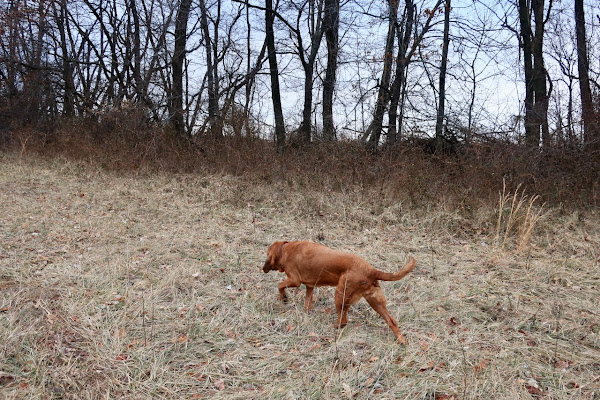 Another blogger that has a couple of labs, lives in Maine, hasn't blogged in many months. Maybe she just got tired of blogging, got busy etc. It just seems strange when people disappear after years of blogging without any kind of announcement for their readers. Is that just me or a general opinion from blog readers? 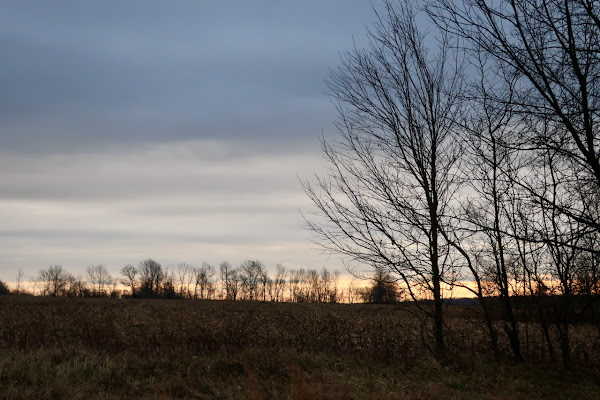 Again for those that have asked me recently, no ... I don't miss the FJ or the Z4 that I sold and traded for the Mini Countryman. The 4-door Mini, All-Wheel drive is a great multi-purpose car with great gas mileage, room for the hounds, and speed when I need it. It's a versatile car and I am happy with having just one car to maintain and drive. 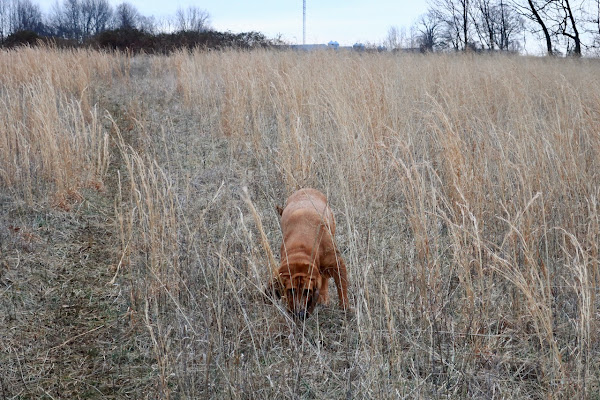 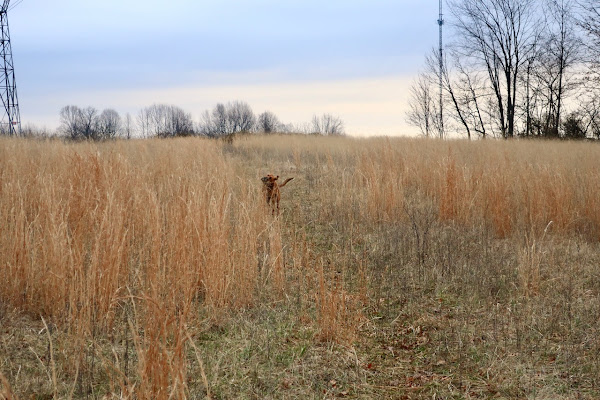 Stella got in a full body shake on the walk this morning. She did not run in this part of the walk for the second day in a row. I continue to give her the joint supplements but I wonder what her reason is for not trotting or jogging. She has always like to run. 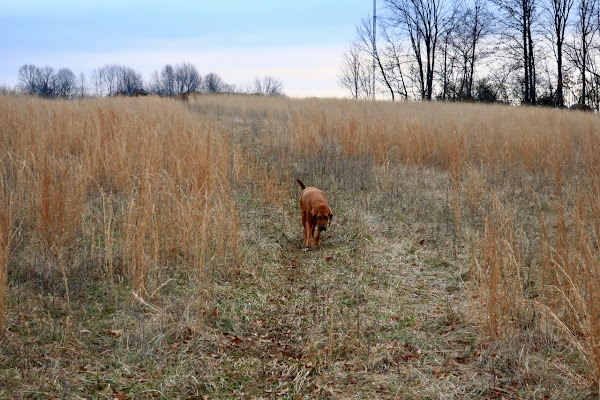 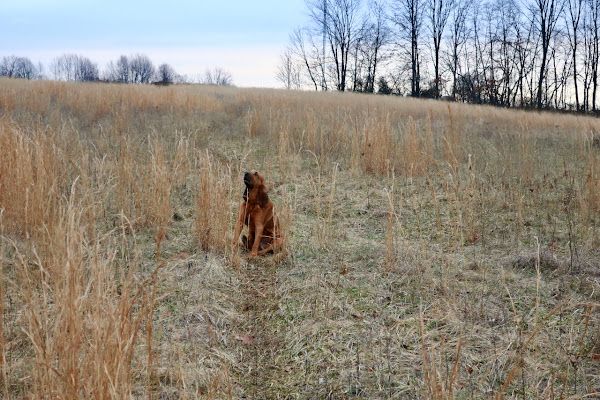 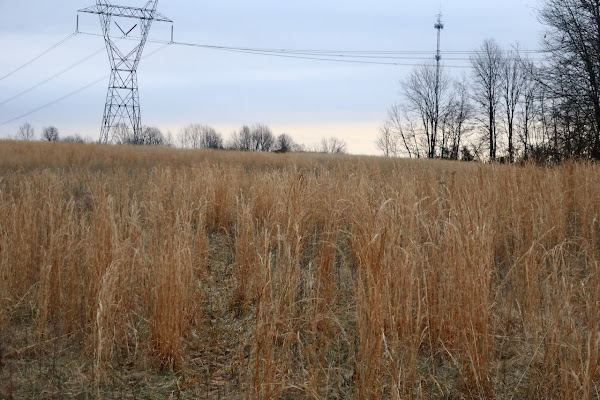 She is in this picture somewhere ... I was letting her do whatever she wanted while I stood near the yard. 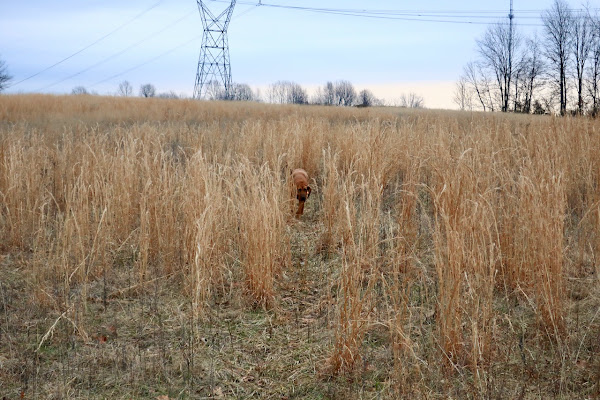 I put my old blog in the private setting the other day. Regular traffic had almost completely stopped and instead, all of my traffic over there was spammers all from outside the USA. I guess that is what happens when you quite blogging but keep your site active. 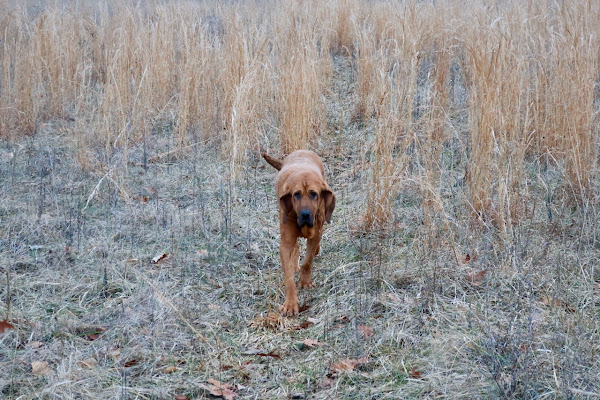 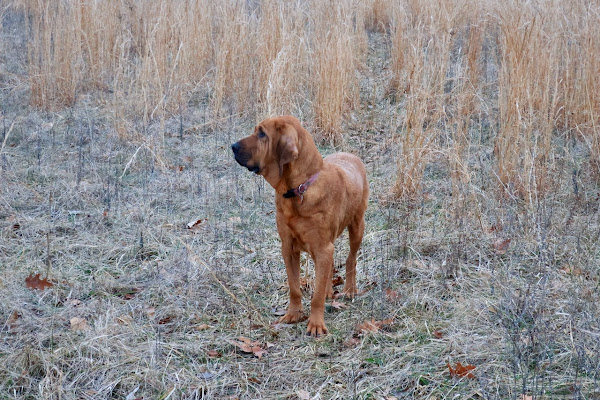 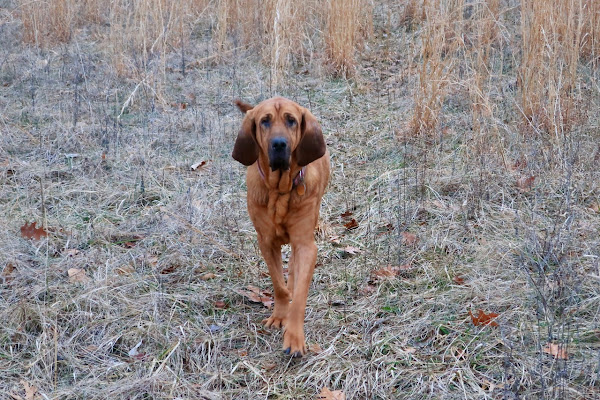 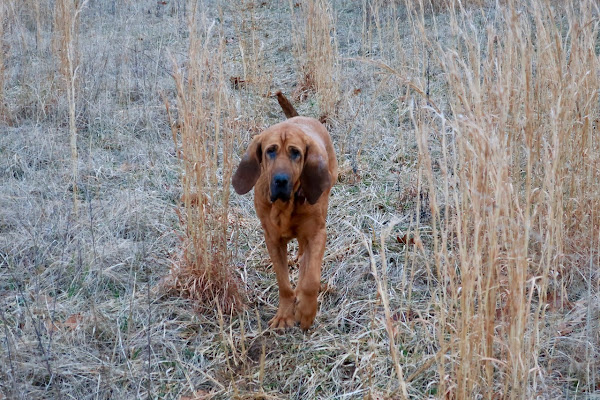 I could feel that Monday was going to be a good day. Stella seemed to think so. Heidi thought so too. As we stepped inside she was barking at us instead of sleeping. I almost forgot ... yesterday afternoon Heidi started on the walk with us but then went her own way once she turned on the path walking along the edge of the field. By the time Stella and I returned she was exploring the southern edge of the yard. She spent a lot of time outside yesterday on her own. 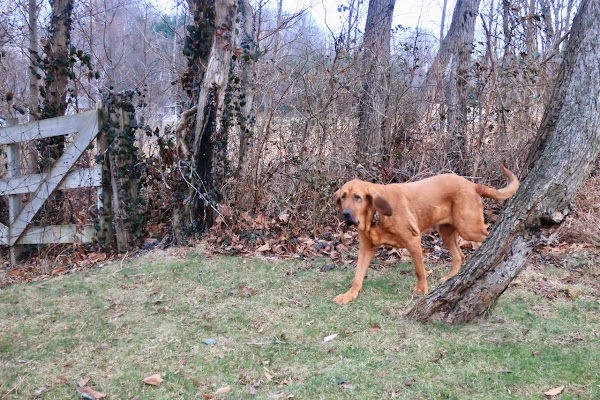 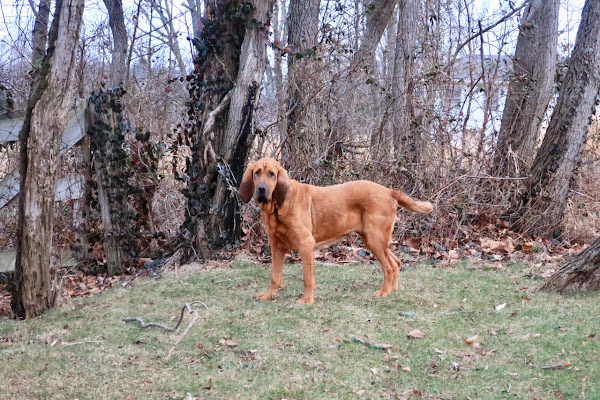 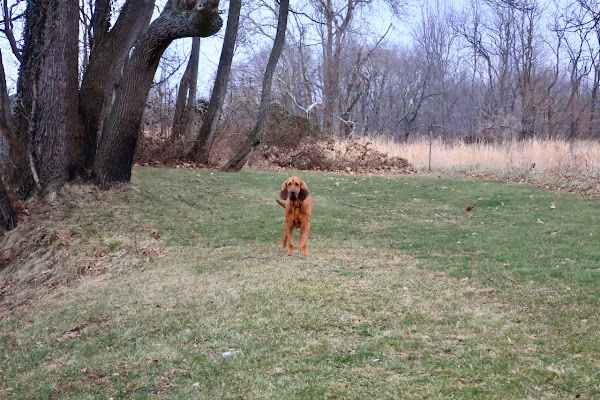 You can tell the difference in the grass by the color. The deeper green grass I planted myself after I cut out, burned and pulled out roots of wild brush that covered that area of the darker green grass.  It shows how much yard I gained after my neighbor had the field surveyed six or seven years ago. 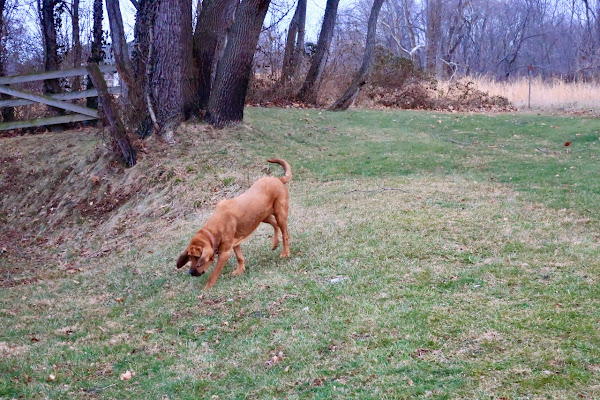 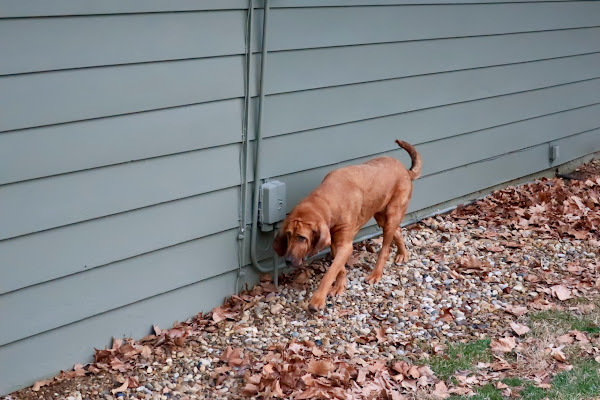 I was able to get a pretty good photo of Stella walking along the side of the house. I have said that has been her new routine the past few weeks and this is a perfect example of what she does. LOL ... don't ask me why ... I have no idea why she does things a certain way but it's always something funny.

When I saw I had 31 photos to be uploaded into the blog I decided to make it a published post now instead of waiting. I have a hard time reducing the amount of photos sometimes. We will see what happens.

I have a slight urge to redesign the blog today. That sidebar idea had crept up again.  Will reading books keep that urge to change the blog template in the background for another day?

It's a great February day here in 'the tropics' of Southern Indiana today.
at February 04, 2019