It's Friday So Now What? 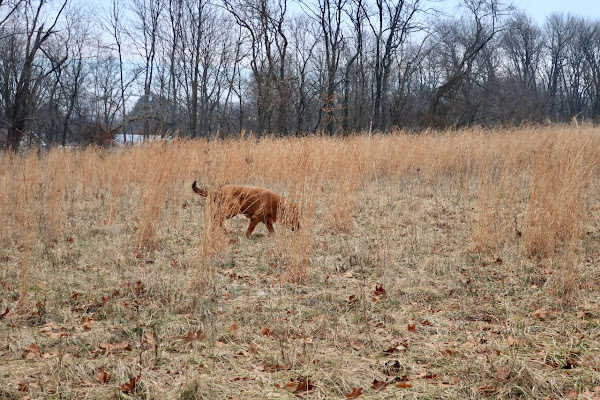 Today seemed to be identical to Thursday. That happens when you are retired and it happens when you are hermit living outside a small rural town in 'the tropics' of Southern Indiana. So it's definitely not a bad thing. The hounds don't mind and neither do I. After another late night of reading (~2am) last night while the hounds slept soundly next to me on the couch, we started our Friday about an hour later than normal. 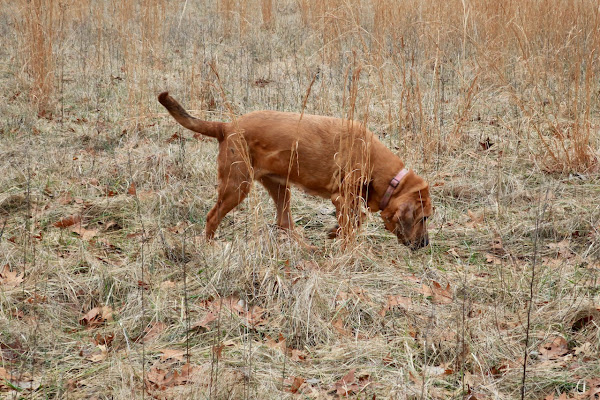 Stella even kept her walk pretty much the same as yesterday, only this time she did not attempt to go down into the gully. With heaps of praise being the focus of my verbal herding, it was one of her best walks in a very long time. She got to do all the exploring she wanted and I didn't feel any frustration like I have with a feeling I was dragging her around the field with words and commands. 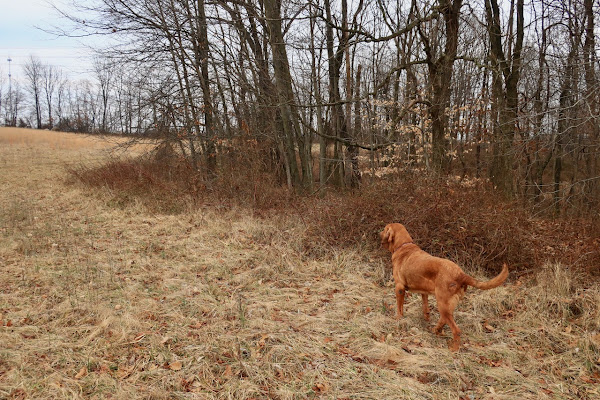 I guess it was something I picked up on while reading the book about Hero Dogs. Not only was it good to read that many other people had dog issues just as bad if not worse than Stella's separation anxiety or Sadie's destruction as a puppy, but what they did to either control the problems or train them to be better dogs.

They had trained over 218 dogs to be search and rescue dogs, certified to go worldwide in times of need. Most were labs or golden retrievers with a few border collies but not one was a bloodhound. The breed with the strongest nose of all breeds. I suspect the bloodhound would not pass their agility test that was required. I mean as puppies I have seen the bloodhounds I have had, lose the balance pretty easy and fall over ... just walking, let alone blancing themselves on a moving beam 20' high !!! 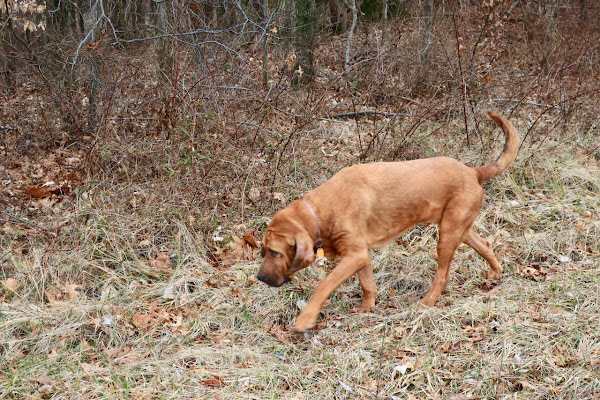 Almost all of the dogs they trained over a 24 year period were rescues and it wasn't until the end of the book where the 85-year-old original owner was starting puppy litters to train them in search and rescue at a much earlier age. It's a great story and a good book for any dog lovers out in our blog audience.

With the temps in the 30's it still felt warm this morning, just like Thursday. It will get up to 60° on Saturday but along with that is a 90%-100% chance of thunderstorms. Sounds to me it will be another day of reading books inside, maybe a siesta or a movie. I'm pretty flexible so who knows what might happen. After our walk this morning, I told Stella "I'm going to the library" and she walked into the bedroom and laid down, waiting for me to close the door. I was tempted to just shut the door to see if she would try to break out but I reverted back to my cord system that I have used every time I leave. She has shown no signs of attempted escapes for the past few months.

The trip to the library was a little disappointing. I can usually find 2-3 new books to read, but not today. I spent extra time looking through the Non-Fiction aisles for other things to read. The books with the "new" label attached to the cover, move fast. If they are there a few days ago, they will not be there today. That is consistent year round, where weather nor time of year does not play a factor.

Yet there is one book that has been sitting on the shelves main display, out in the open for anyone to grab it. Other books written by government people who have retired, part of the deep state, or current political dreamers have come and gone the past few weeks I have made regular trips. This book is still sitting there and I have not seen it move. 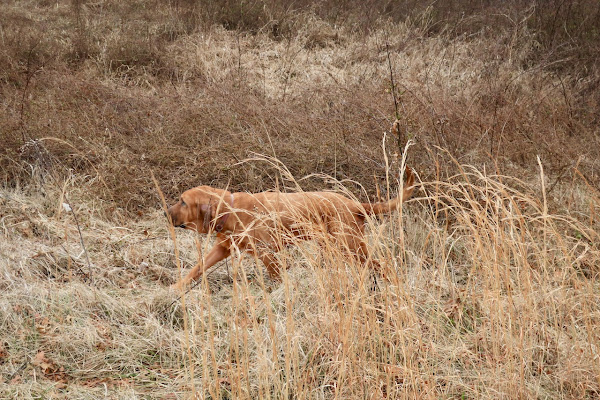 I ended up checking out a book written in 2018, "The Future of Capitalism" by Paul Collier. With the subtitle "facing the new anxieties", maybe it will give me some reassurance that the idiots of the far-left cannot win in November 2020. Can there be 60 million people stupid enough to think that socialism is better than capitalism? 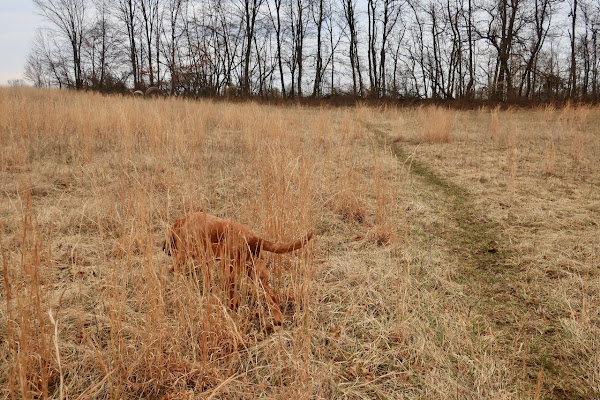 Since I could not find a second or third book to bring home with me today, I will continue reading the in-depth book about Steve Jobs, written a few years ago, with almost 600 pages of small print. 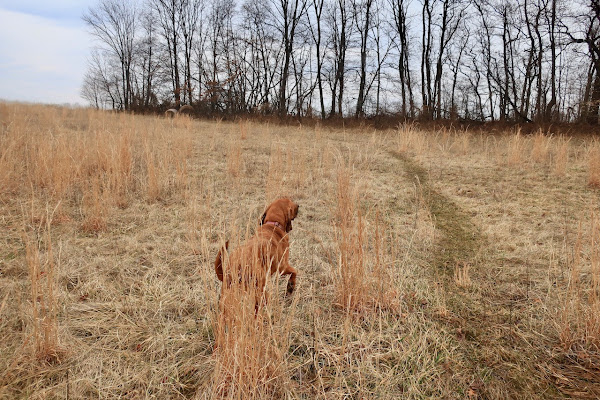 You can tell that Stella was having fun, prancing through the field back and forth across the path. I could  barely keep up with her this morning after she got past the first turn. 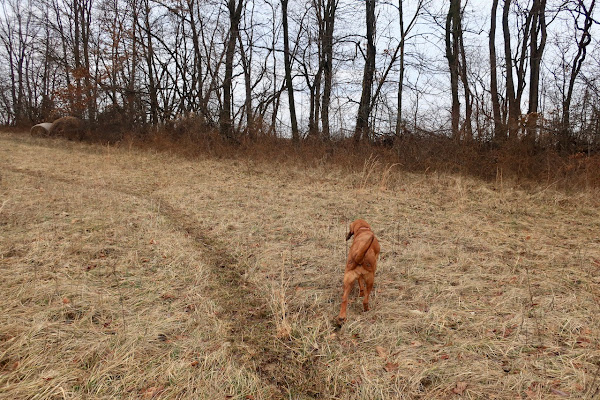 Some of the tv financial experts on the tv business stations are questioning if the "dingbat AOC" is really that stupid when it comes to economics or is she playing with people's heads? I mean some of the things she says makes you wonder since it proves she does not know the difference between "funded" and "tax abatements" ... really hard to believe that she has an Economics degree from an Ivy League school. 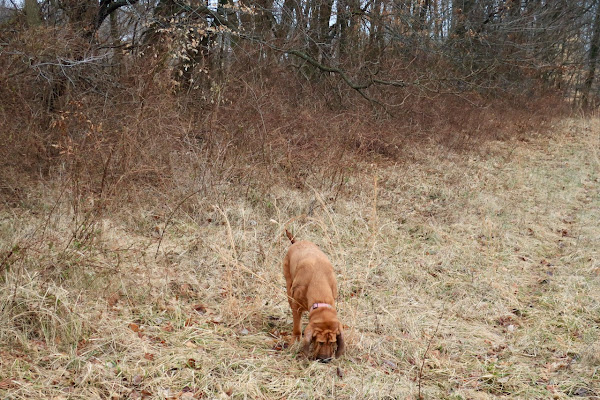 I saw this morning where Bernie is refusing the requests of the DNC to run as an Independent. He is filling out the paperwork today to run as a Democrat. It will be interesting to see how all that plays out. I still haven't heard a plan from any one on that side of political fence, about helping the middle class American people. I guess free health care for all, free college for all and open borders are their plans.

For you that are against the wall ... I hate to tell you there is a video online of a wall being completed in New Mexico. The continue to build more walls, not fences, as we speak. Believe me, they do not have to wait on funds to start the wall. It will not matter what the Democratic side of the house issues today. They have been building walls along the border for the past year, will continue to build without delays with funding already on hand. 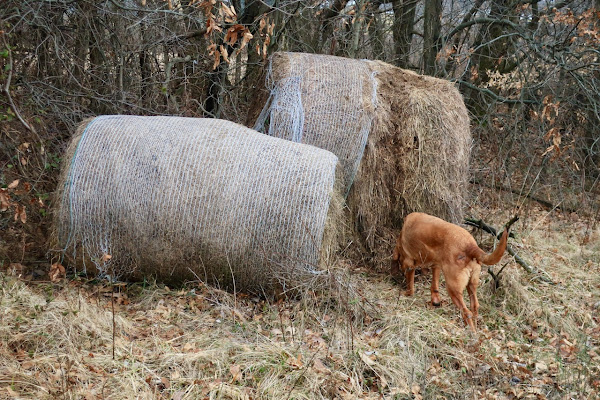 As far as moving government money around from one department to another. This is NOT a new thing. It isn't a Trump invention either. It has gone on all the time, by different Presidents and is very common in government finance. I know because I spent over 20 years working in government finance and at times pretty high on the food chain.

I've had funding pulled back unexpectedly, I've had new funding dumped on me with instructions to spend it by the end of the fiscal year (September 30th) and as a retiree I sat here watching Obama pull 1.7 BILLION from the Veterans and just so happened to use 1.2 Billion for a new program of his for immigration support in his last year in office. A coincidence in the similar dollar values??? Not a chance. He was the best crook of all. 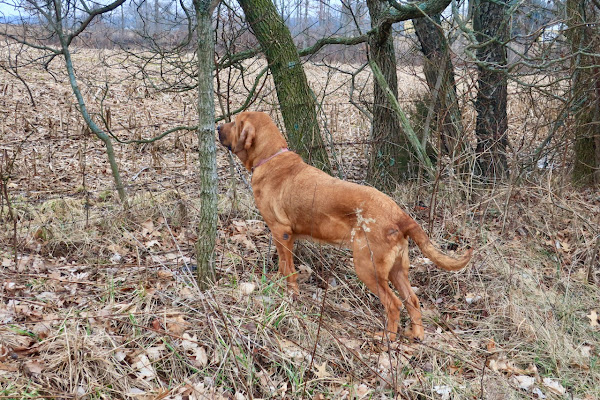 One thing I did notice during those 20+ years of government accounting, many times there was more than enough funding to get the projects done with a lot more funding sitting on the side in the "just in case" mode. Many times that money was never used or given back to those departments that gave it to you.

Believe me, there are millions and millions of appropriates just sitting around gathering dust and are available, without hurting any department projects. It's not a big deal with Trump moving funding around. Find something else to bitch about. 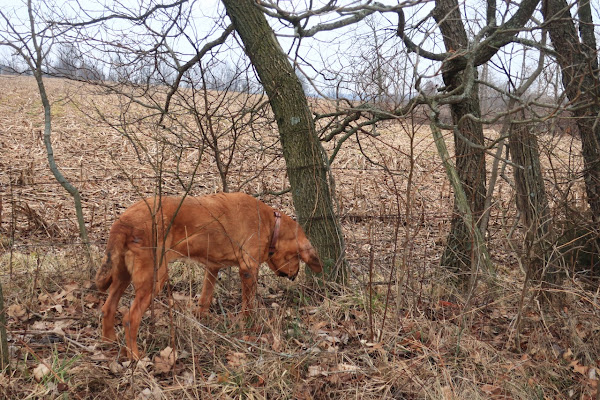 There really is a small old fence between the field behind the field we walk in. I wonder how long that fencing has been there. Stella was sure deer had been in the area. 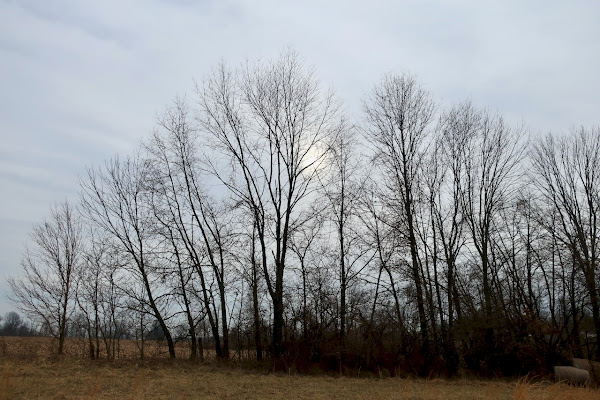 The sun was trying it's hardest to shine this morning but it was not going to happen. Five hours later it had given up. 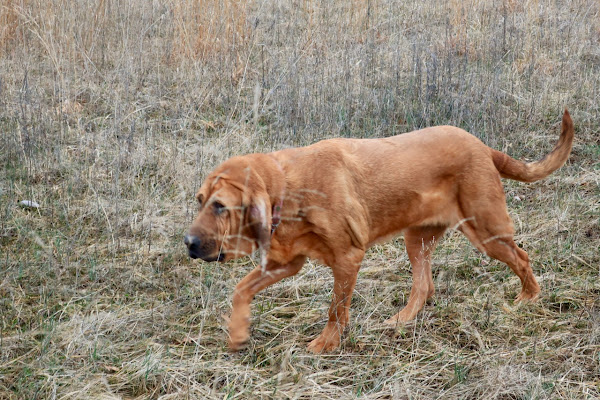 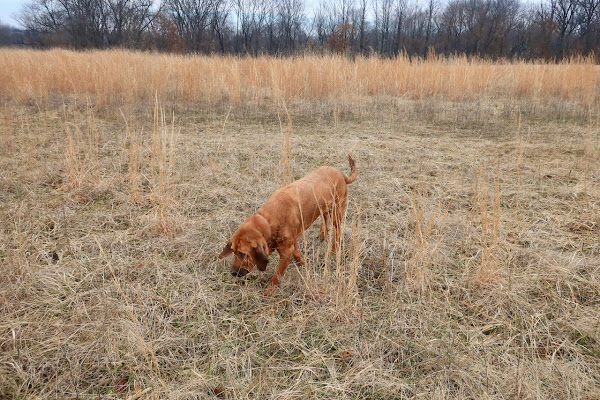 I noticed last night that hair IS growing back on both of her ears where she had scratched them down to bare skin. Like I said the other day, it took only one dose of the Wounded Warrior dog ointment to heal those raw spots. 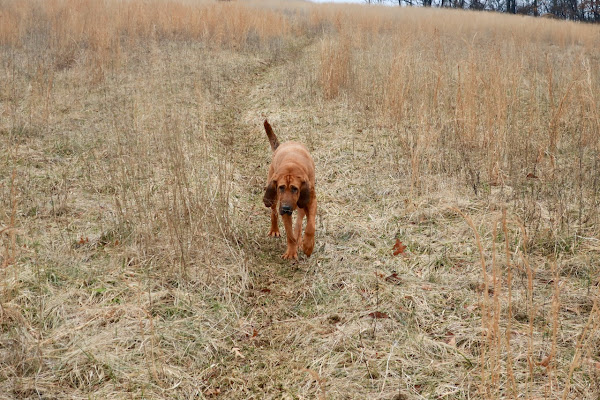 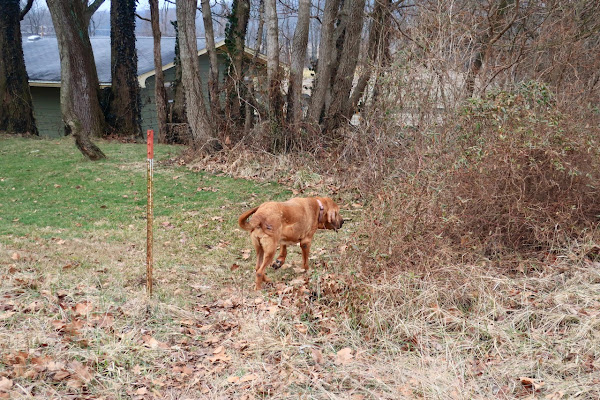 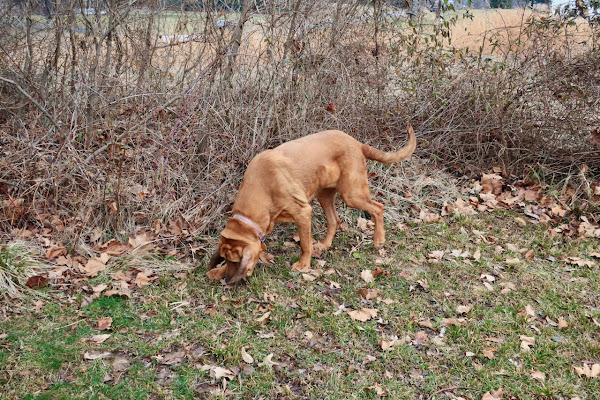 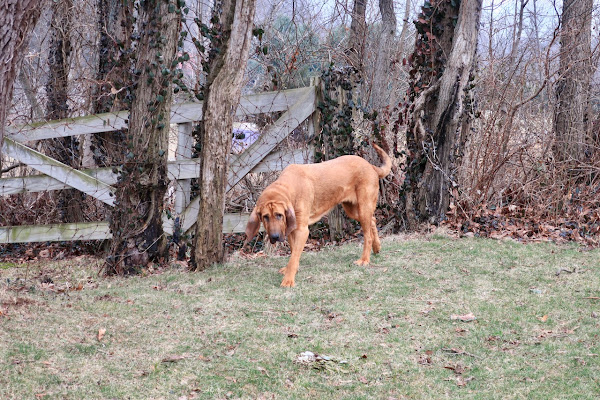 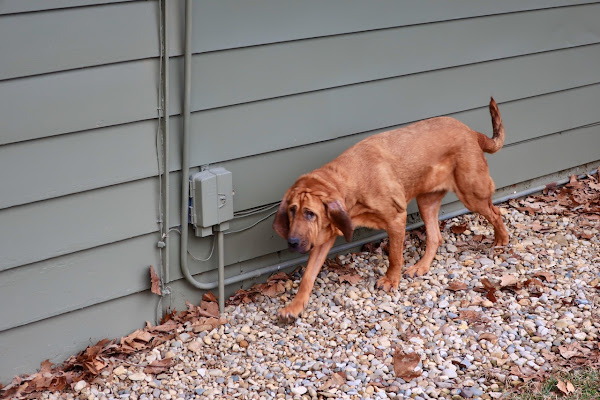 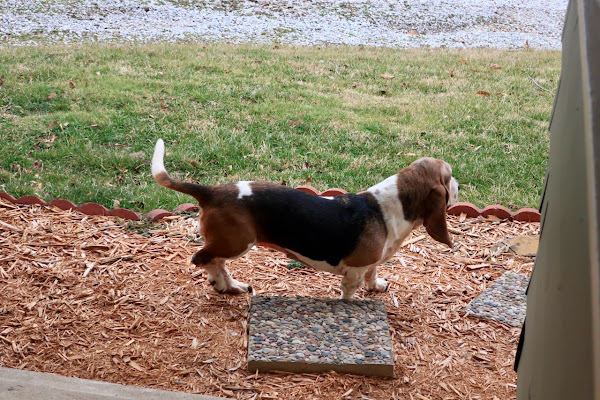 By the time I returned from the library, Heidi was positive it was time for lunch. She started barking non-stop, then Stella followed up with constant howling. It was only 10am local time, about an hour too early for their lunch. We split the different and they basically got their way. I fed them lunch at 10:30am, justifying by telling myself that this spring it would be 11:30am .... She spent a little time outside but not as long as I would have expected.

She went back to sleeping her afternoon away in the big leather chair while Stella was on the couch. See, nothing changes around here.

I can't think of anything else that will happen important enough to blog about. So once again I will post this as soon as I am finished editing it, instead of waiting until the end of the day.