What Will The Hounds Do This Week? 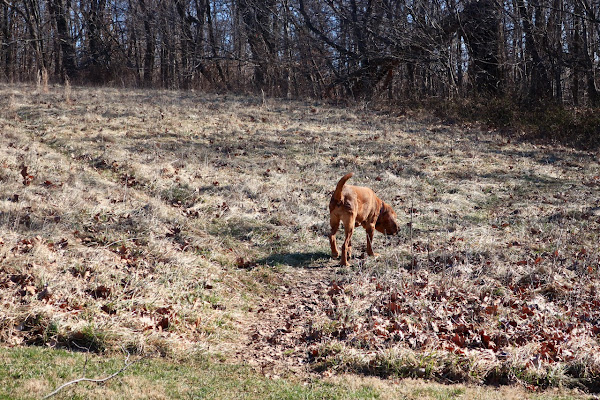 It seems like any kind of routine change happens on Monday's with these hounds. So you have to wonder, what will the change be this week or is it even going to happen just because it's Monday. I had the first change by getting up an hour earlier but only after I felt a bloodhound nose nudging my arm and some light whining as Stella was standing next to the bed. You might think she wants to go outside to pee but she only wants food and to eat her breakfast. With bright sunshine that early I had no problem starting my day. 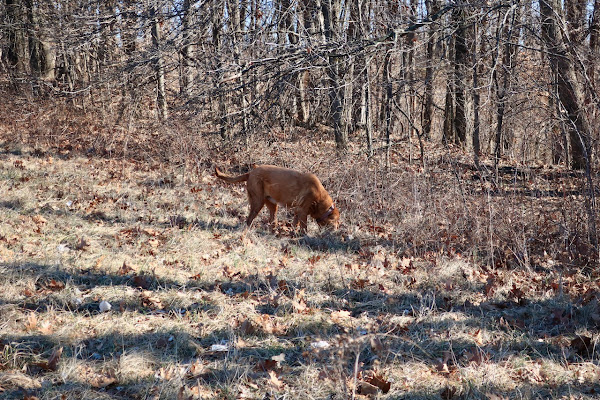 I remembered the other day I told myself I would trade all of this rain for sunny skies even with winter cold temps. Well today I got my wish. We didn't take our first walk until 10:30am but it was only 25° and yes, it felt cold. Yet it was nice not having to walk through a wet field. 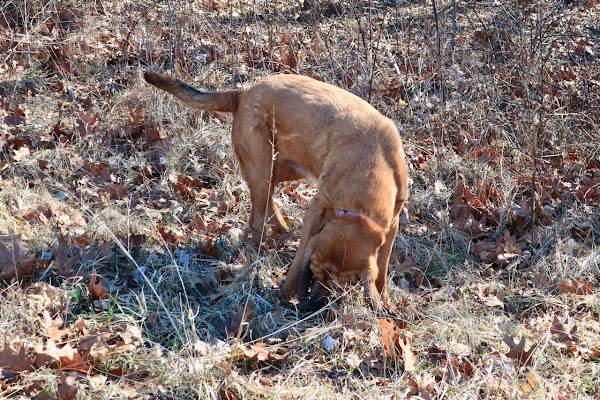 Stella was into adding protein to her diet this morning. That is about as nice as I can say it. I hate that habit of hers. Sometimes she will stop if she hears me say 'No' but other times she might decide to be stubborn and act like she doesn't hear me. 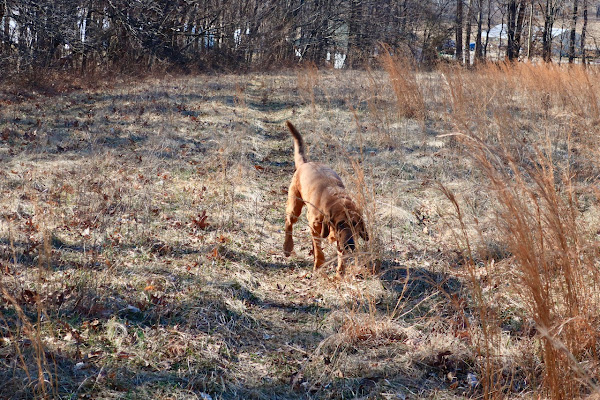 We had a late start this morning because I spent time reviewing and adding some things to my reviews of my Apple Watch and my Canon G9 X camera. I started them months ago when I bought each of them the first week of January. I am happy with both purchases. 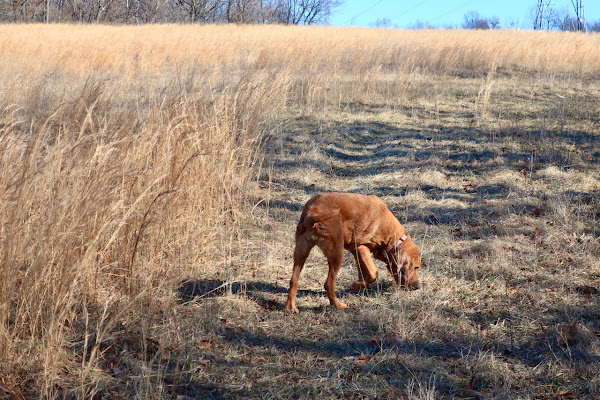 I am somewhat surprised I like drinking black coffee after decades of drinking coffee with two teaspoons of sugar in each 12oz cup. I also find that I don't have a feeling of bloat after those two cups of coffee like I had been feeling lately. I don't have one grain of sugar in my house, with no plans of buying any. Some times I will add some heavy whipping cream but that does not add any kind of sweetness to the coffee. 3rd day in a row with no sugar in my coffee. 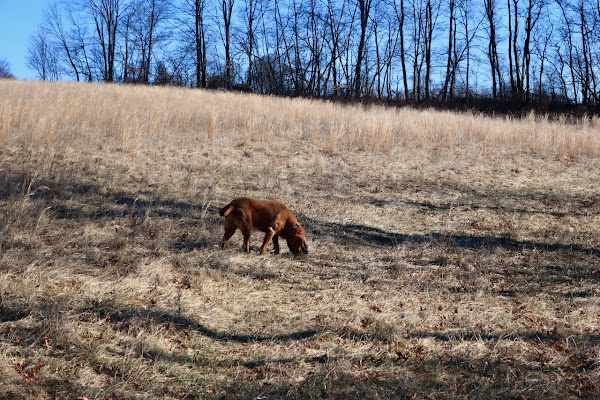 With it being so cold outside I will still stay inside reading books. I might pull a movie off the shelf to watch today. Usually when it gets near to the baseball season (31 days to opening day), I like to watch movies I have about baseball. It has almost turned into an annual tradition. Last night the movie feature was "Money Ball", a true story that did just like they thought ... it has changed the way baseball rosters are put together and the way the game is played at the major league level. 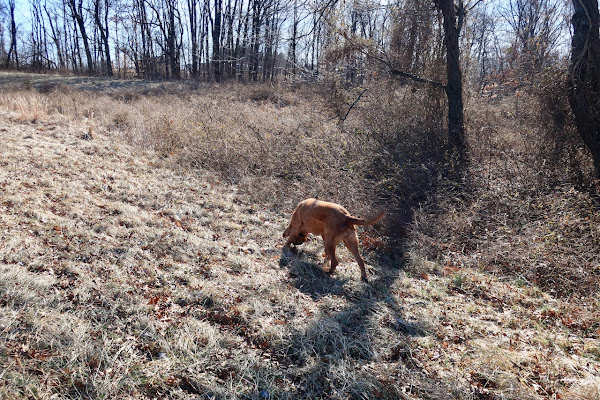 I basically let Stella walk on her own with very little verbal herding this morning. 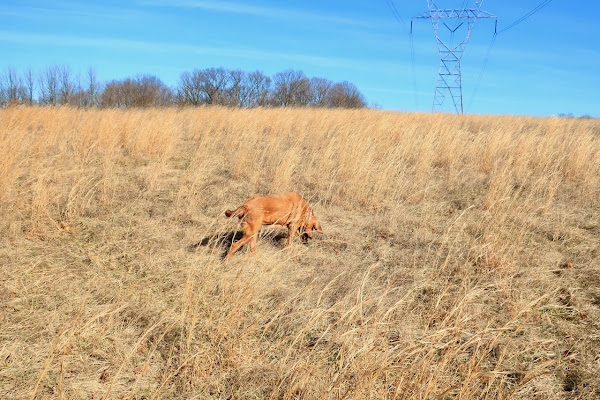 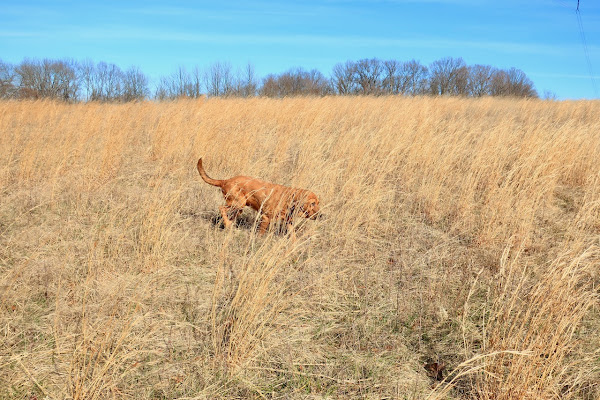 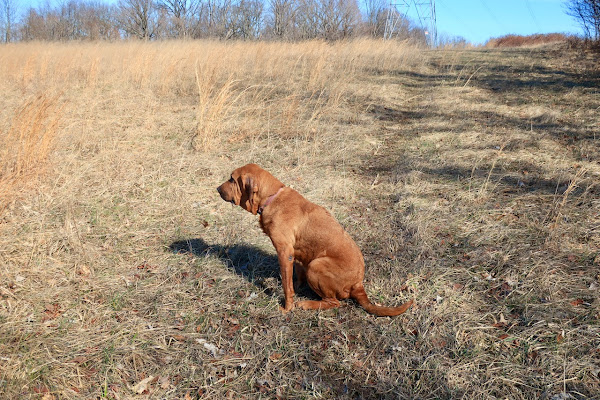 Stopping and thinking ... not sure about what but she did not move from that position to scratch herself, she just sat there for a short time then came trotting toward me. 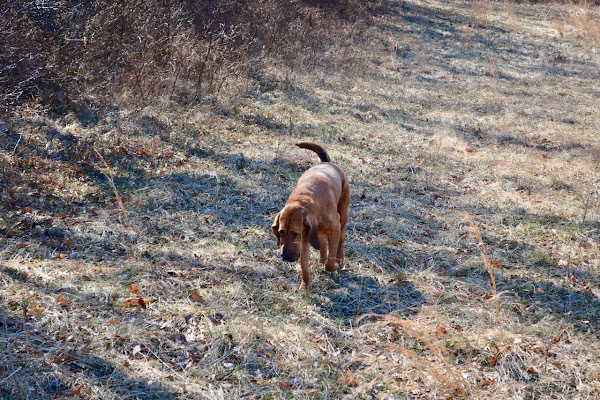 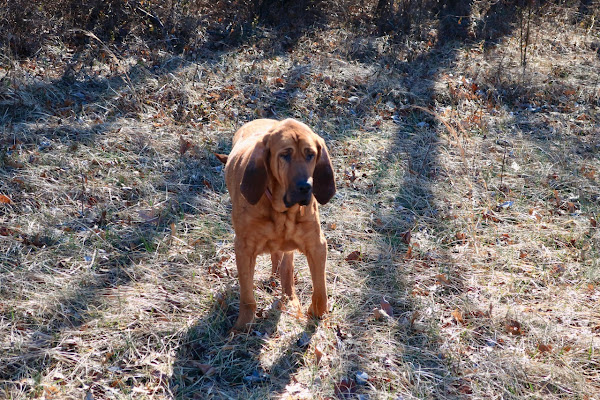 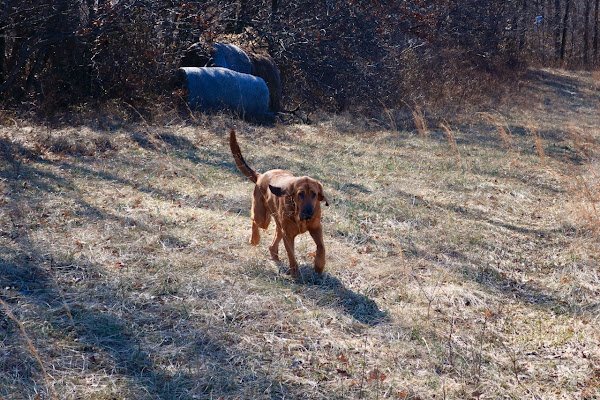 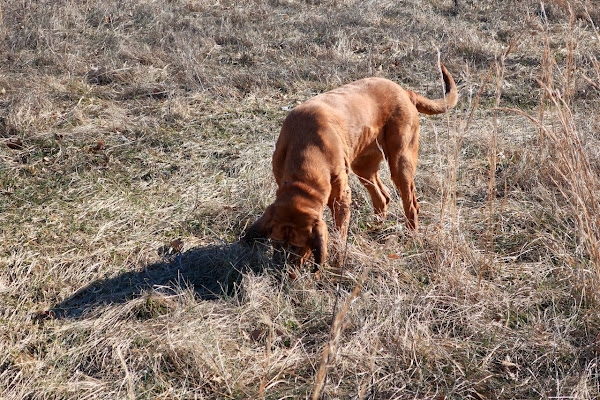 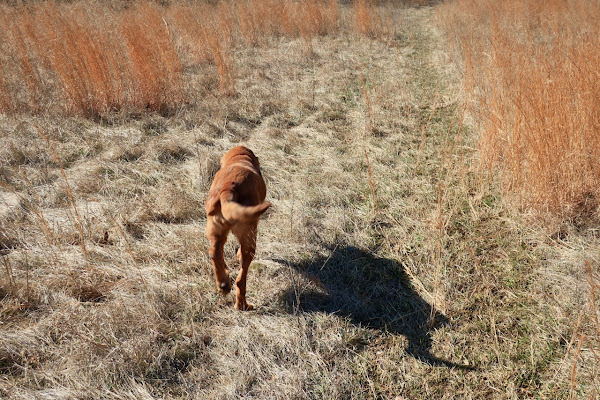 Finally she decides it's time to head home. 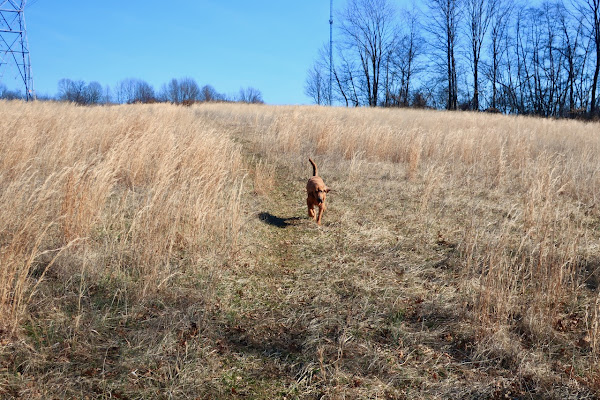 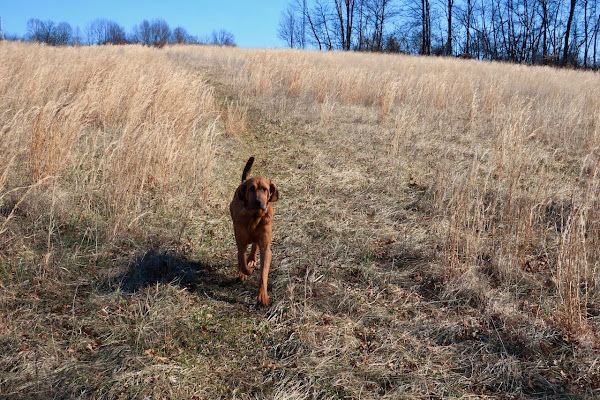 A little jogging to catch up with me. Plus she thought she heard me say something about "lunch". 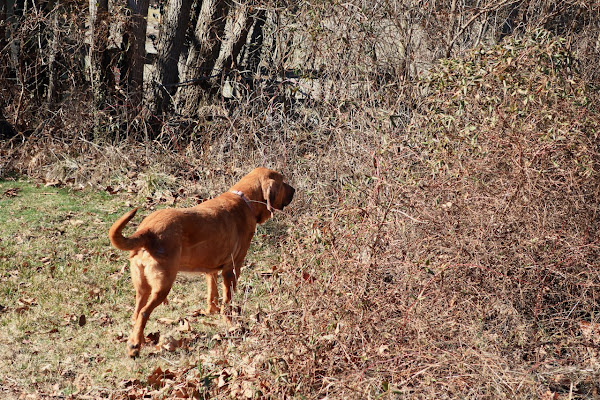 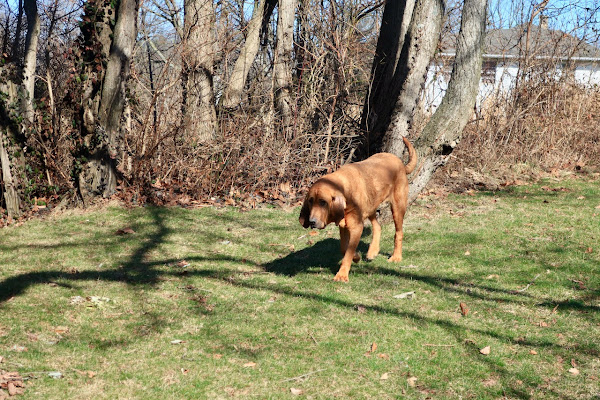 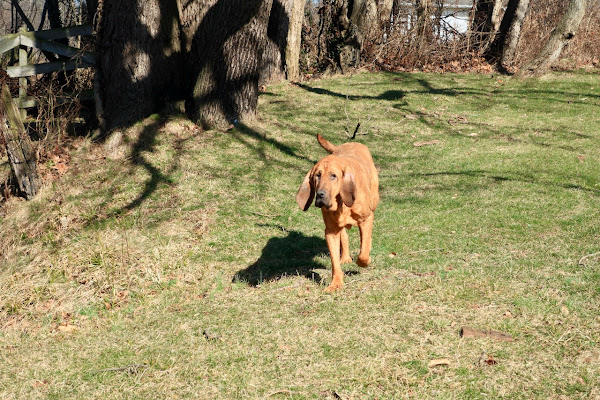 With food on her mind she didn't take the time to inspect all the trees, she wanted to get inside as soon as possible ... would lunch be served?  :) 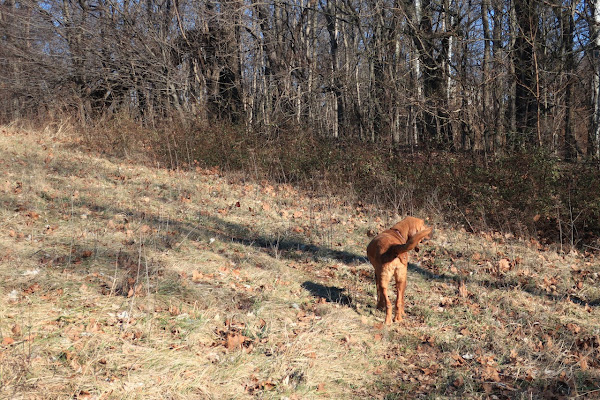 With it cold outside most of the day Heidi flat refused any photo session of her today. She was outside long enough to relieve herself and then SPRINTED back to the door to be let inside. Late in the afternoon while I was playing hours of Mahjong, Stella walked over to the kitchen door and nudged the doorknob with her nose to let me know it was time for our afternoon walk.

Although chilly, it was close to 40° and still sunny, so no complaints about the weather. As you can see Stella did her normal very slow afternoon pace. 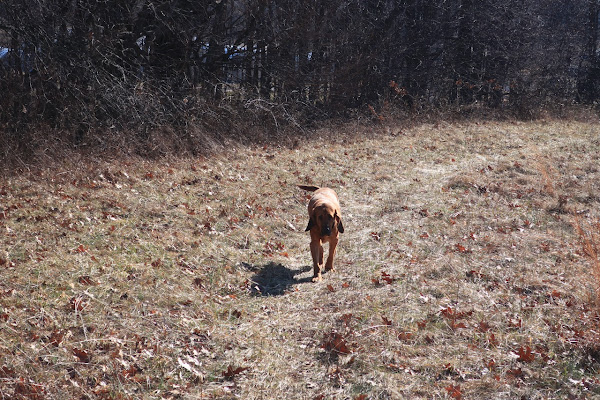 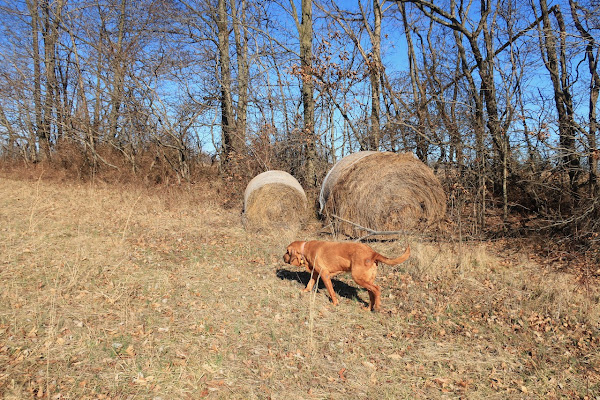 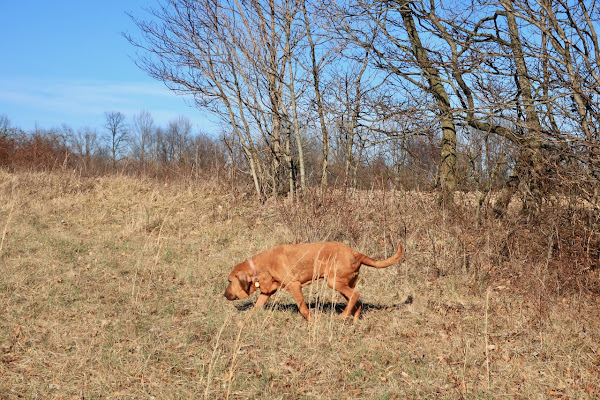 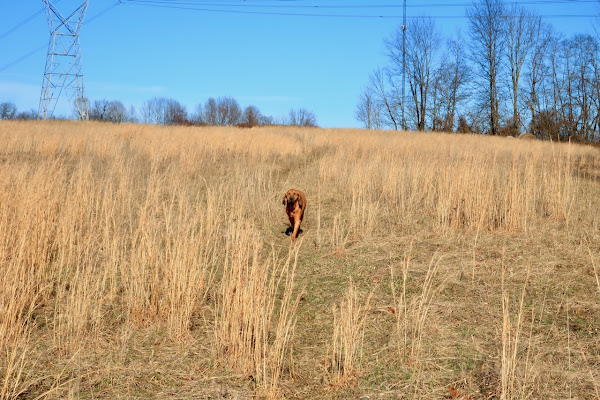 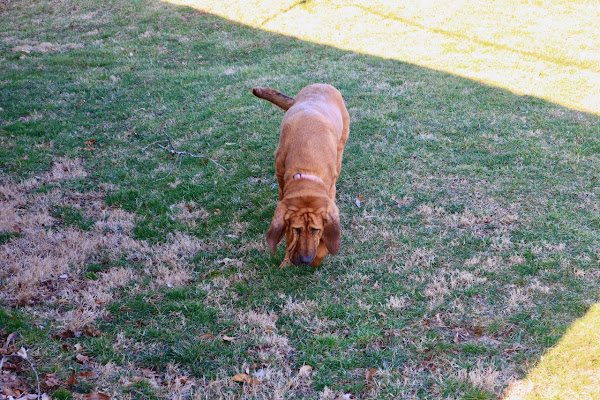 As I post this I am returning to the couch for more book reading. Not much going on today here in 'the tropics' of Southern Indiana.
at February 25, 2019