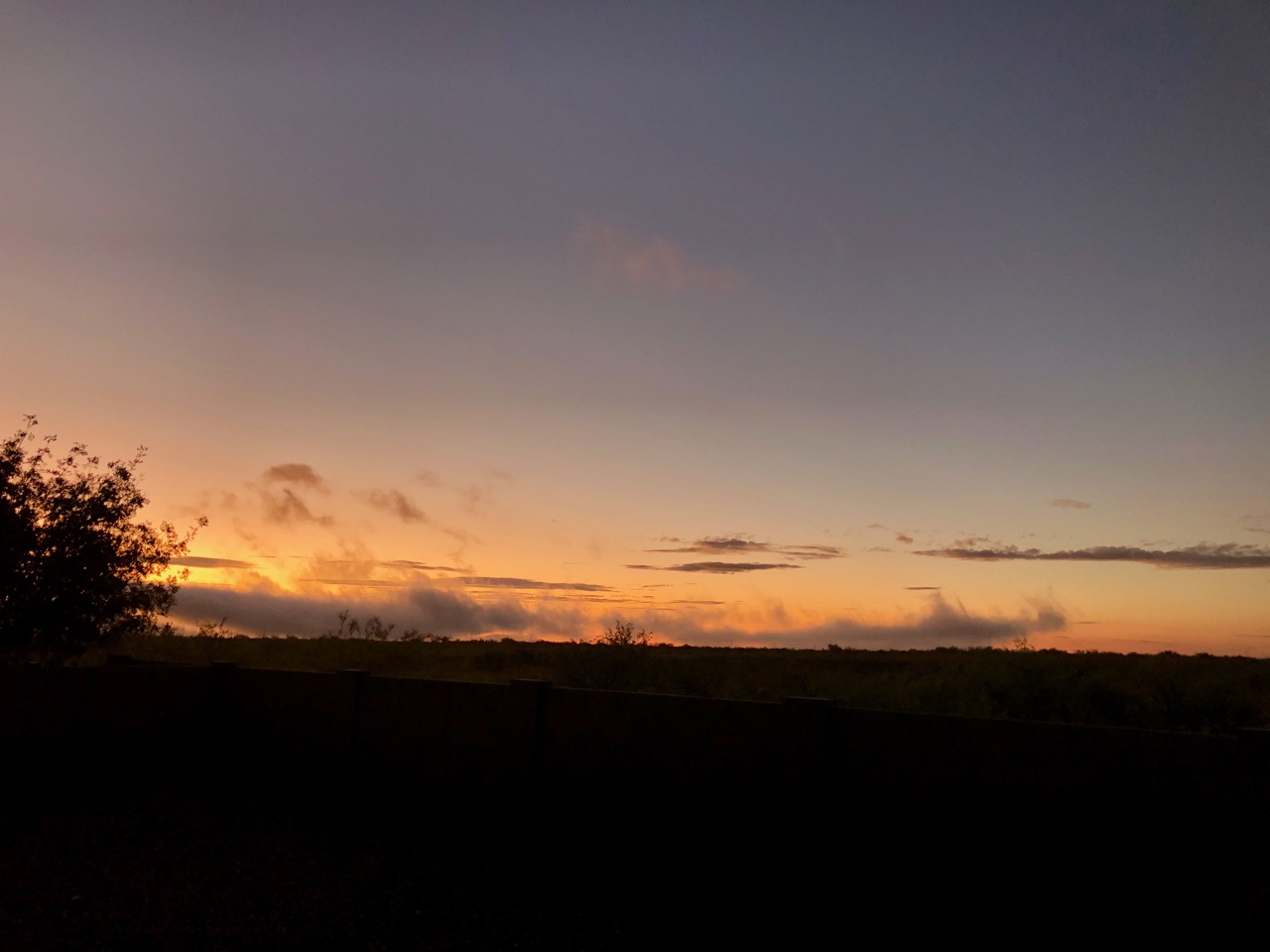 The day officially started at 5am after another great night of sleep. As I rolled the walker down the lit hallway, neither hound woke up to follow me. I open all the blinds even though it's dark. I open the front window and the back door to get a good early cool breeze in the house. Coffee is then put on but I have noticed a strange thing since I started grinding my beans at the time I make the coffee. I am using more coffee for the same amount of water ... or 1 cup of coffee. 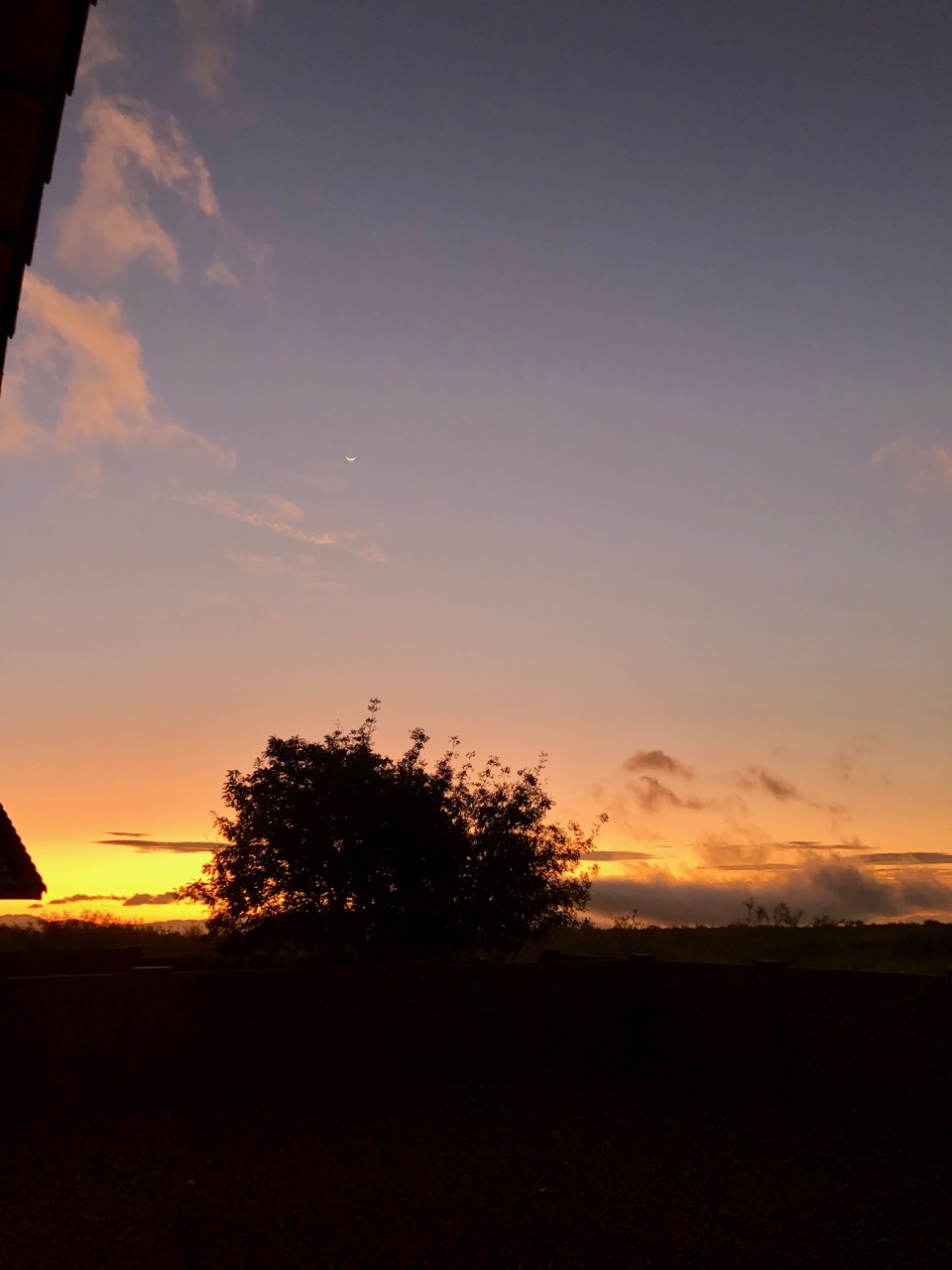 The sunrise was beautiful and the air near 60°. We are going to be back to normal temps now and the rains are gone. Which means cooler temps this time of year. By the time I grabbed my cup of coffee, the cane and headed for the computer room, neither hound had made a move from their overnight sleeping position. 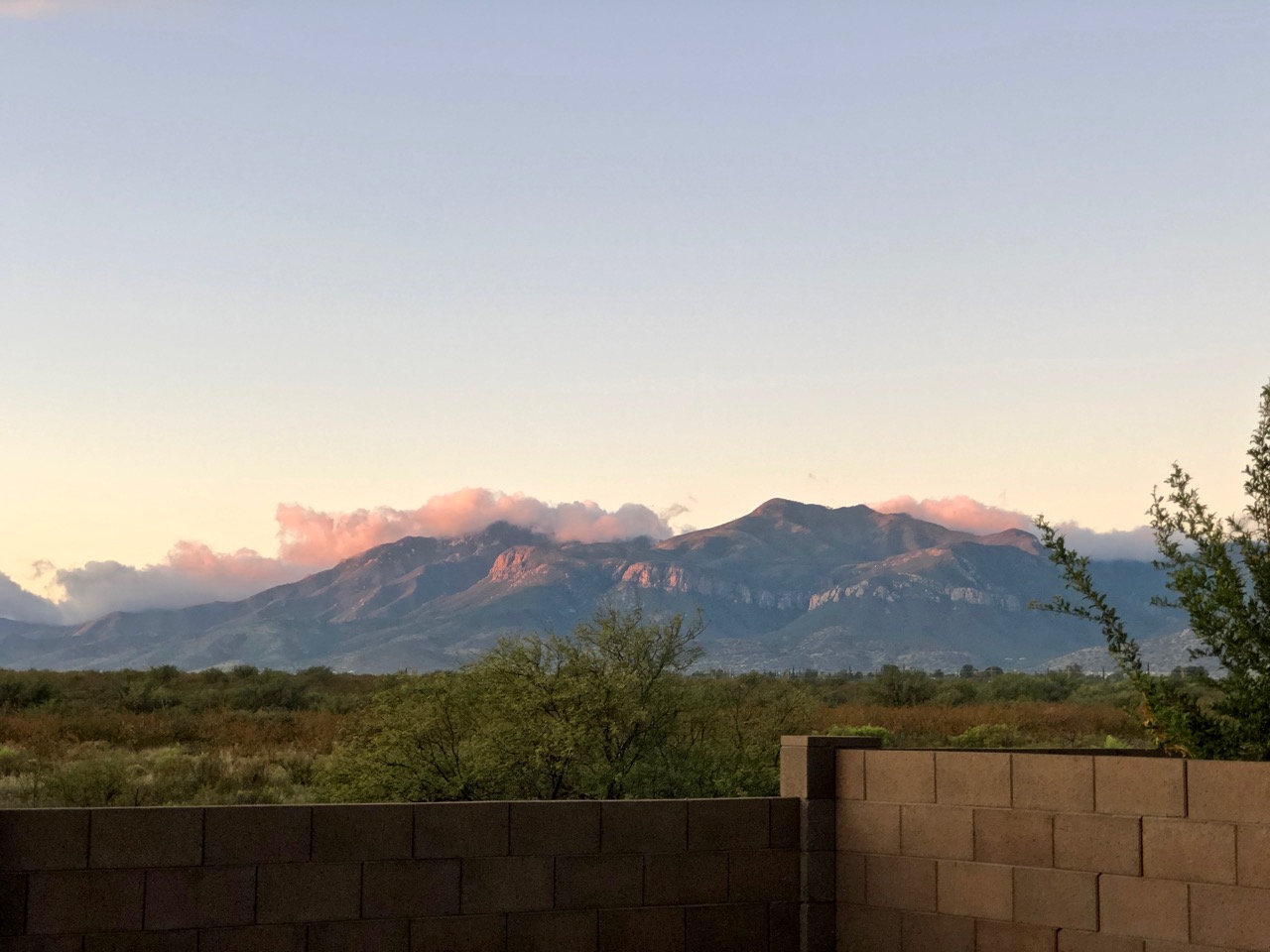 I took these photos a little after 6am when the sun came up. I didn't have a lot of plans today. I mainly wanted to see how my leg and hip responded to the 6,000+ steps I took yesterday. I was willing to back off a little today if they told me to. As of 2:27pm today I had 3,192 steps in so far. My hip feels good as well as my right leg and foot. 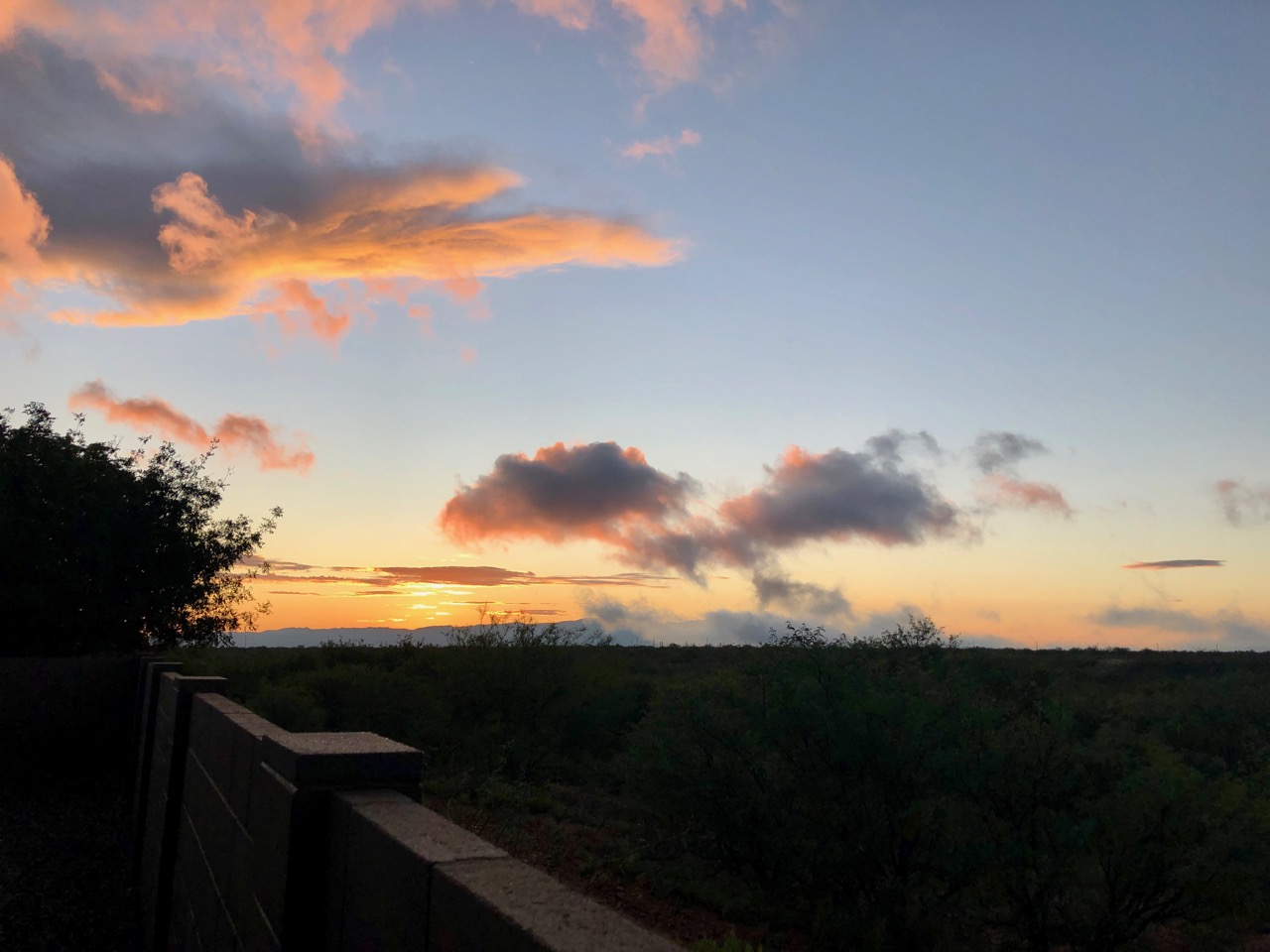 As you see I took this photo standing at my fence facing the Mule mountains towards Bisbee. Standing by the fence is the best position for those mountain photos as I have another below facing the west and standing at the fence.

I knew the first day it was going to happen but I thought I'd give it a chance and see how it played out ... My neighbor.

Most of you probably know what I am about to say because you have been in the same situation. Little things were adding up ... to the point I was going to put a plug on it and kindly suggest it stop. If I need a ride I'll call Uber or a taxi. Yes ... it was getting that bad. 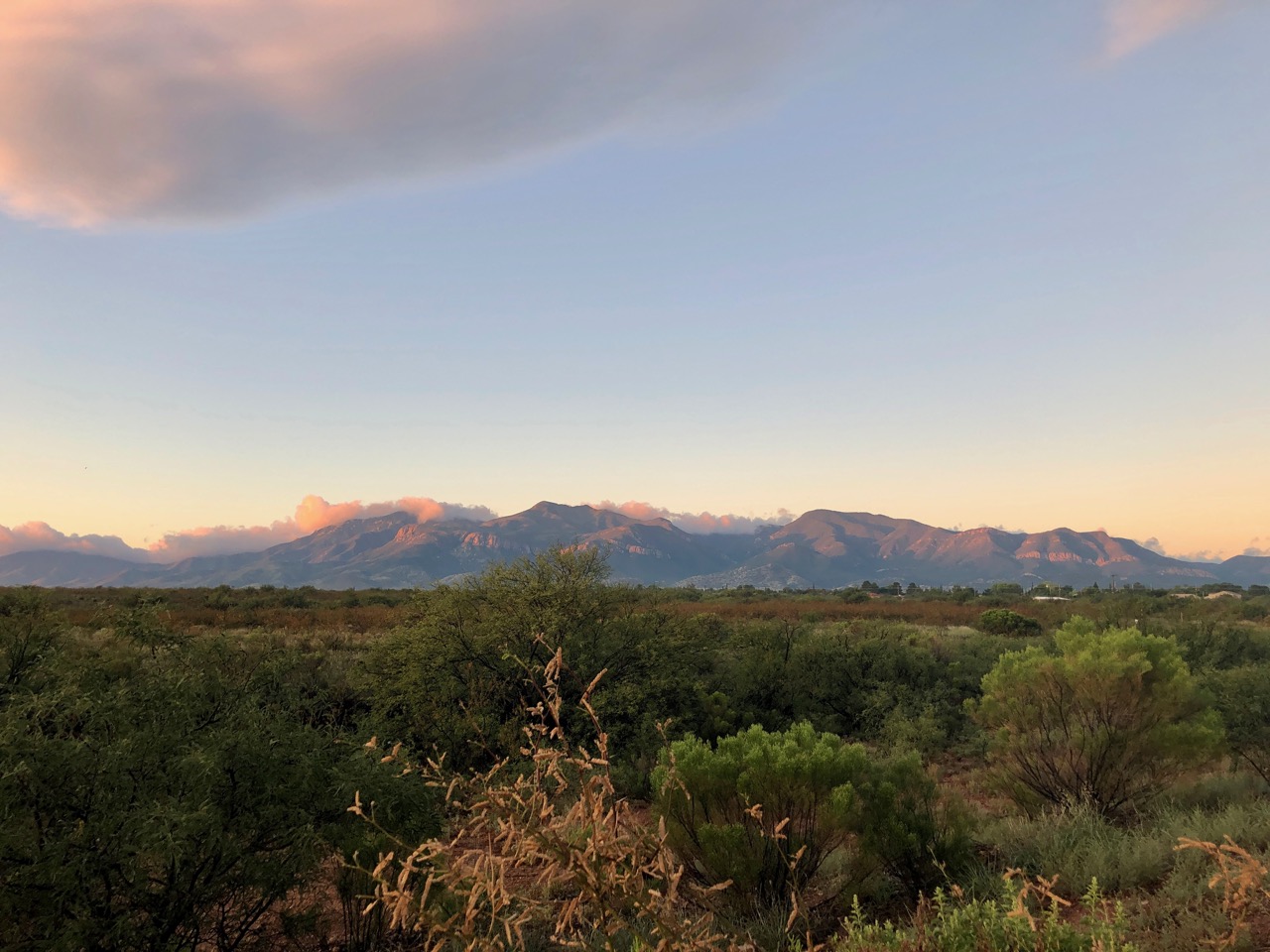 About 50' from the fence is a natural wash. You can barely see it going left to right. A whole different view from the back fence compared to the patio.

He is the type that likes to help everyone in the neighborhood and does from what I hear. He has also made a few of us mad but they put up with him. I was also warned before moving in that his friendliness moves into control freak mode and overbearing. I was aware and ready and from what I had seen he was moving along the path as scheduled. I really don't mind suggestions but basically I am going to follow that surgeon's orders from Tuesday and nobody else. He is a doctor !!!

It started the other day when he questioned the supplements I had bought and have been taking. I personally feel they have been a factor in my quick healing. Not all but some of the factor. He questioned the amount of walking I was doing while I was following doctors orders. Then this morning he told me I didn't know what I was talking about nor knew what muscle fatigue was.

I knew this wasn't going to end well. 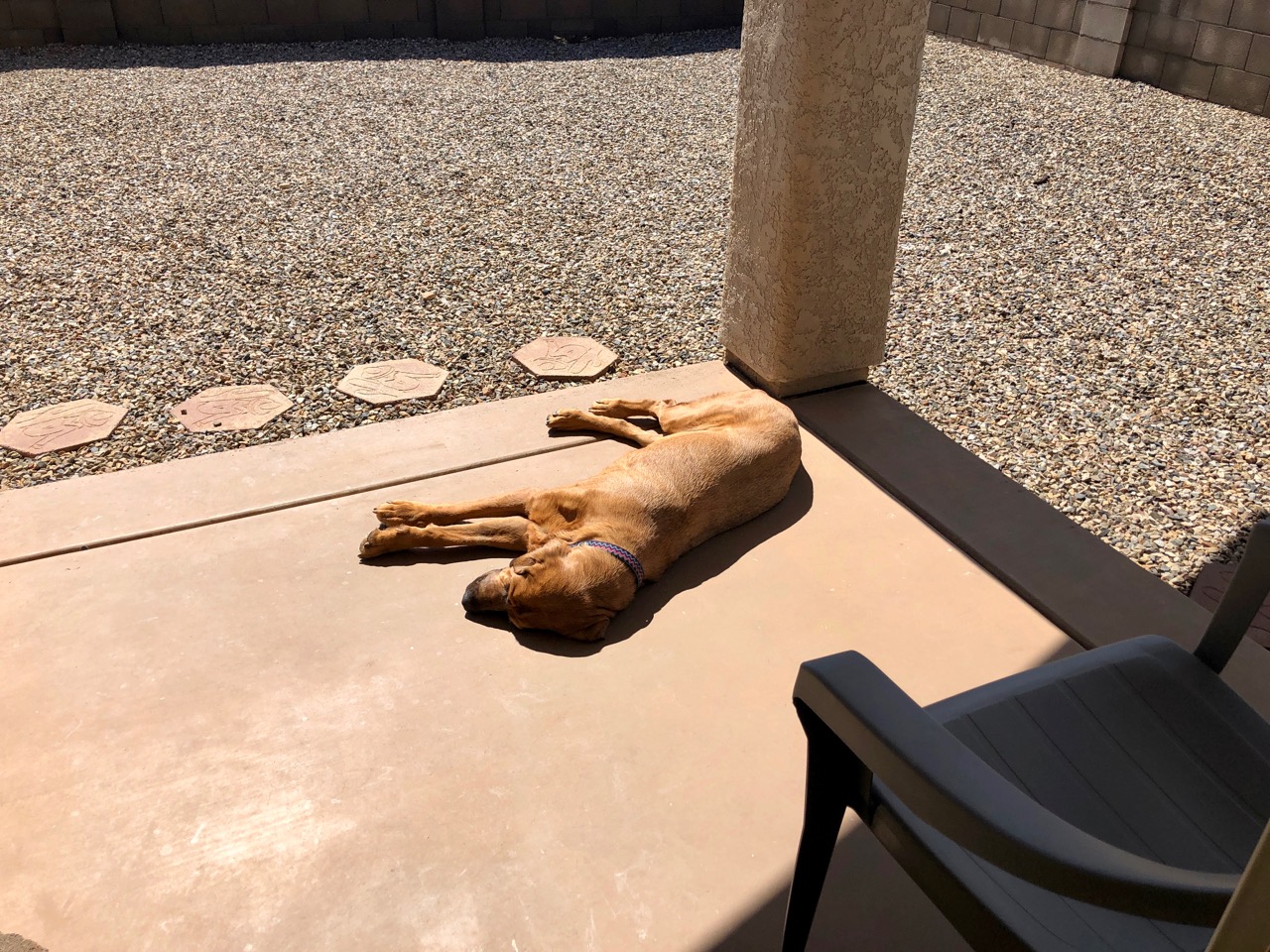 This morning while Stella slept outside enjoying the sunshine I was accused of not following doctors orders. Really? What business is that of his? Voices were raised and the argument was on. It was short - fast - to the point and I did all of the talking. For basketball fans you might remember an IU coach named Bobby Knight so you have a pretty good idea what took place.

I instructed this overbearing control freak to go back home, bring back my keys to the car, mailbox and front door and then I'd give him his cane. That took place in a short time. There is more to this than just this morning or his comments to me for the past week.

It involved the hounds. 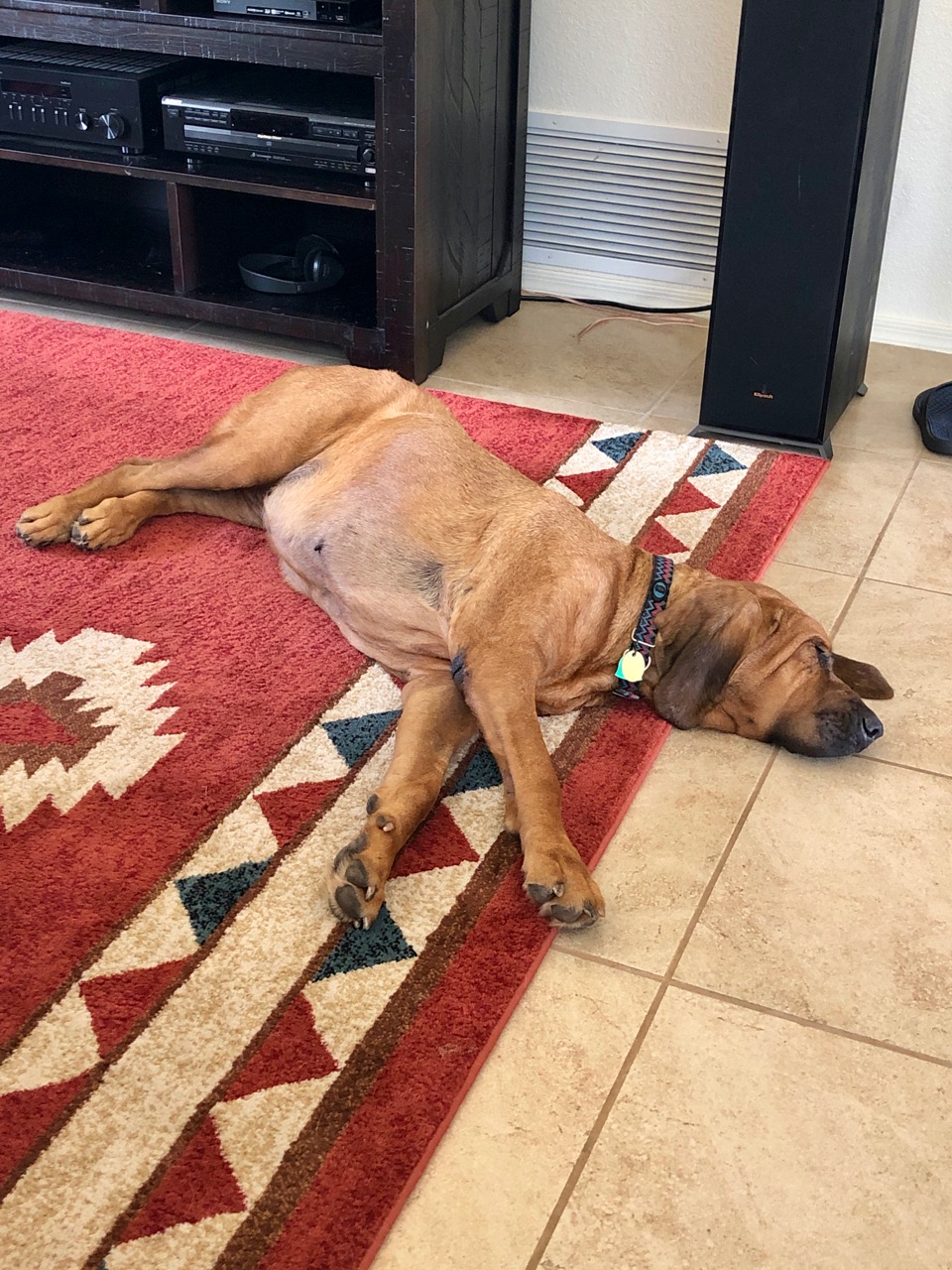 Once Stella found out I was not going to feed her at noon like the old days, she decided the best thing to do was to sleep until 3pm or 4pm.

I did not call him from the ER on Sept 7th to help me out with my hounds for a reason. I had seen him enough around Stella and Heidi the times he was over at my house before my injury and he didn't like them. He hated either one of them getting close to him. That didn't stop him on the 7th trying to take control of the hound situation after I had called MJ the pet setter who happened to get to my house and inside within 15 minutes after I called her. She didn't know who he was nor did she know I had not called him. He said later to me, he saw a strange car, a person key in to open the garage and he came over ... like my security guard ... that I never asked for. 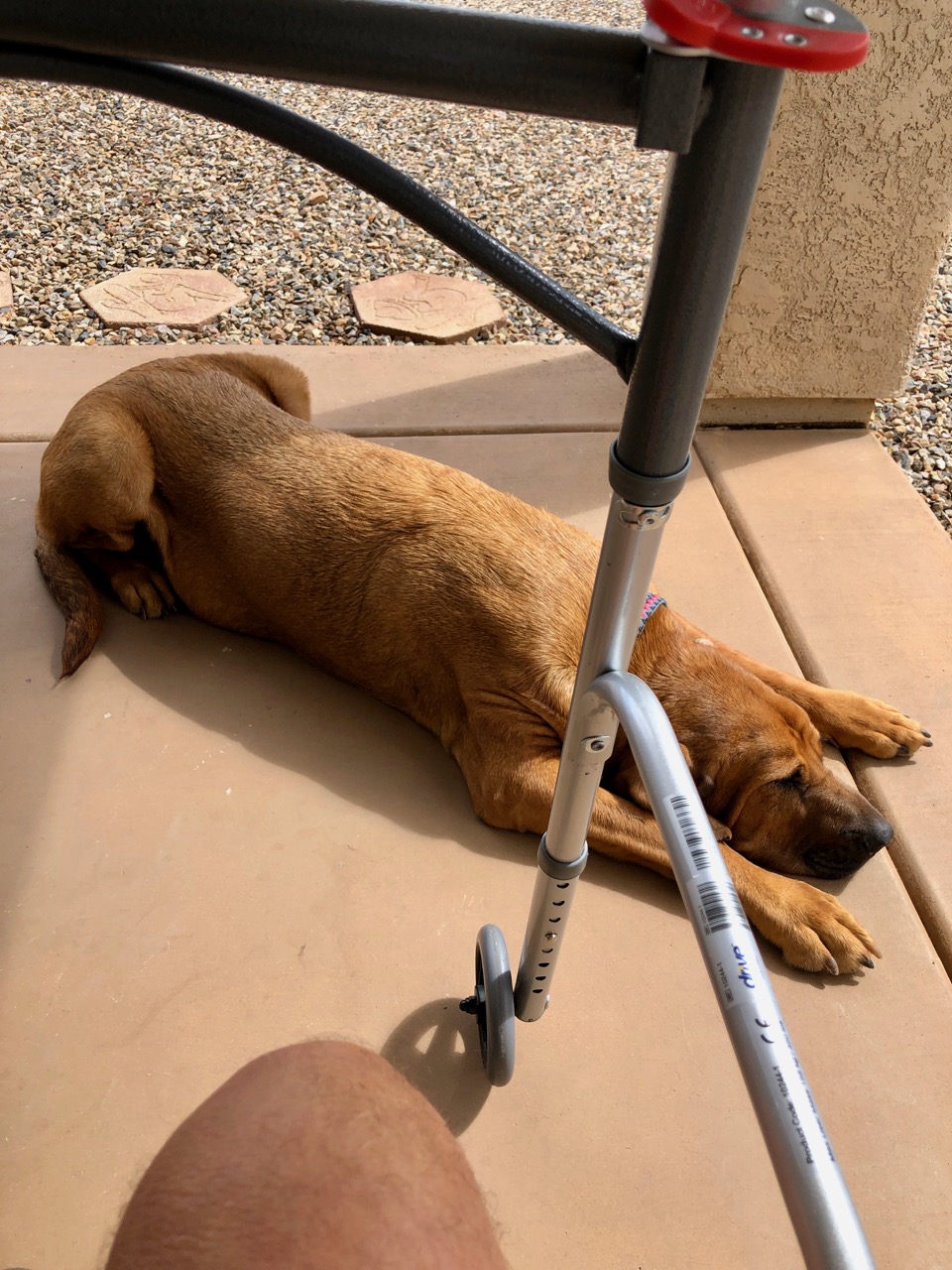 She did not tell me what happened but I found out from him ... because he told me of all the rearranging he had done with the crate I keep Stella in to keep her safe and my vertical blinds in tact while I am out of the house. What else he told me he had done was not what I wanted done with the hounds. He was doing stuff that did not need to be touched but just like I was warned ... he is like an old construction foreman ... his way or the highway. 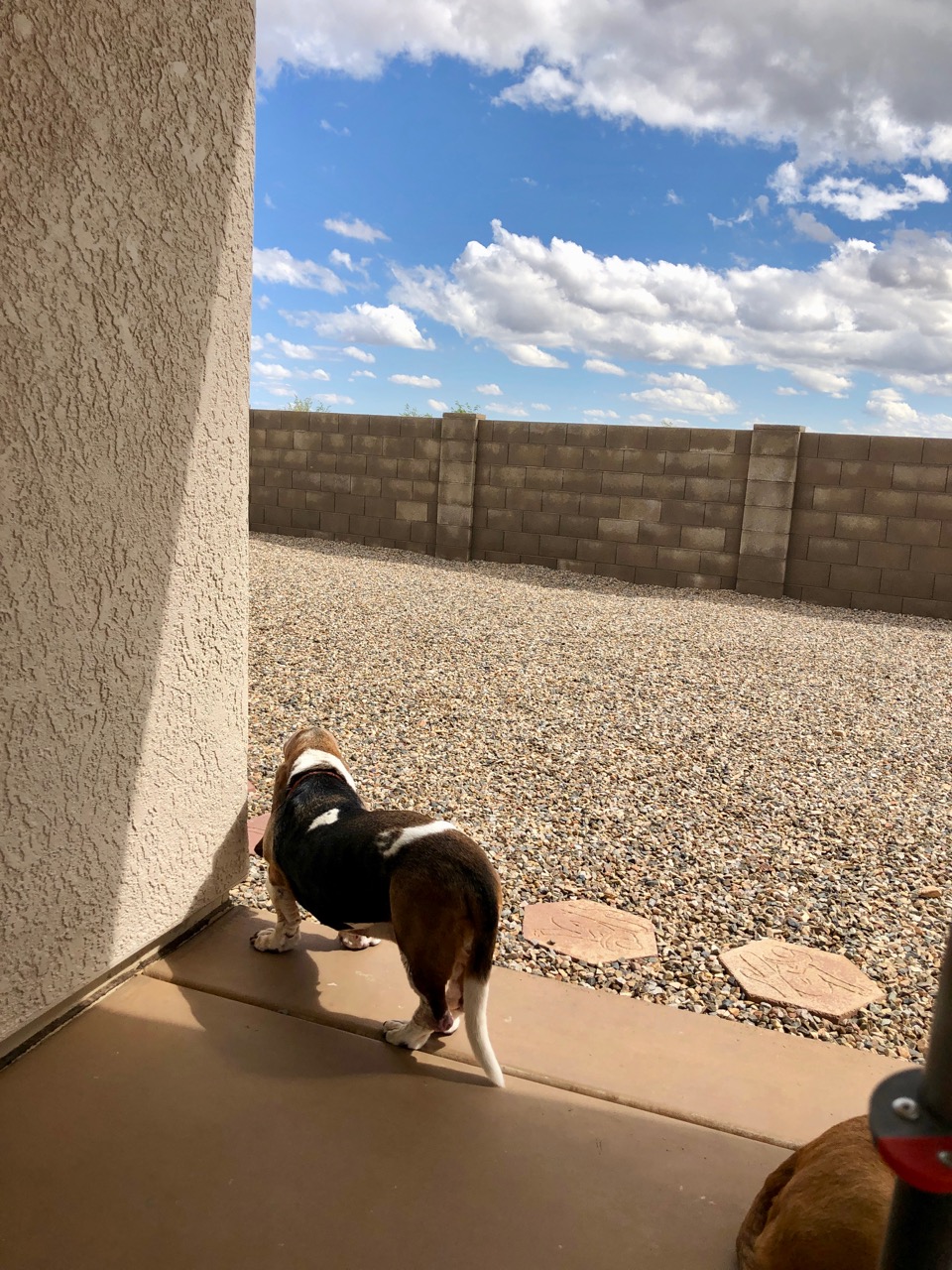 So that "helpful neighbor" is outta here. Oh ... he fed me crap yesterday for feeding the hounds myself and then picking up the dog crap in the yard even though I was within all the requirements the doctor gave me. I don't remember the doctor telling me I had to be bedridden.  :)

You get the picture? 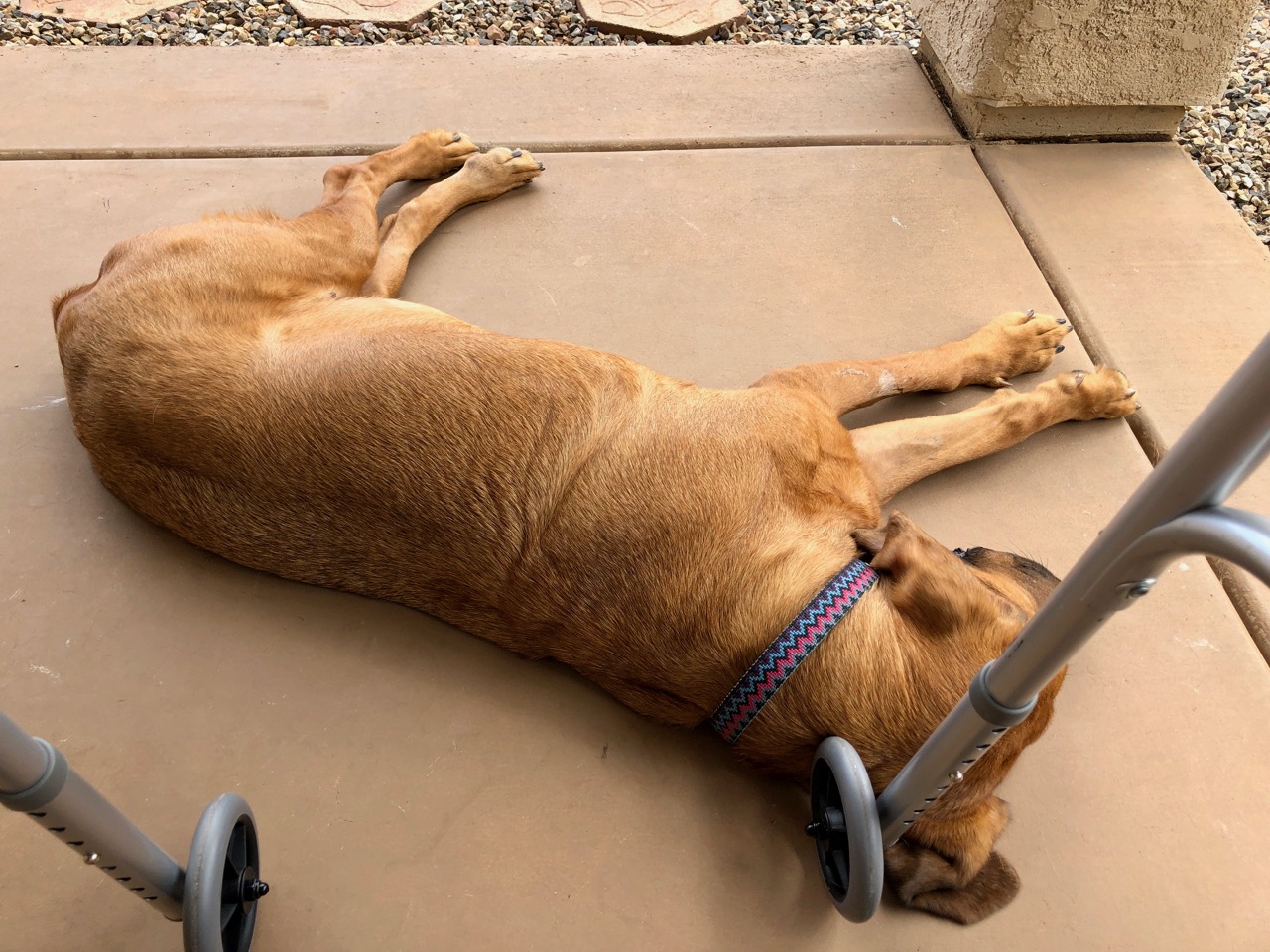 While the three of us were outside this afternoon enjoying 72° and cool winds ... Stella made sure that my walker and I were going nowhere.  I had to wake her so I could move back inside. 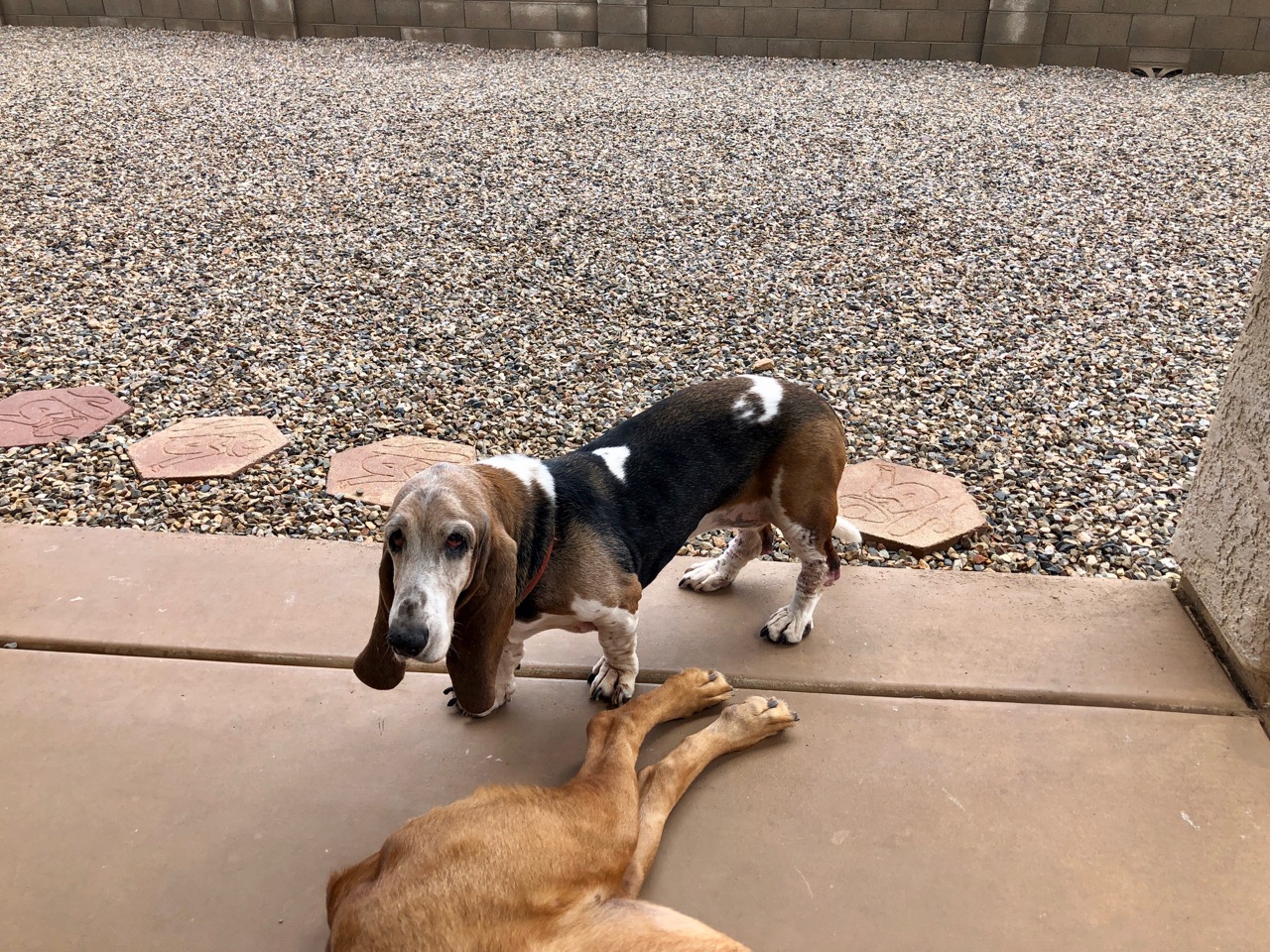 Heidi had a lot of energy today but not a lot of photos. More active than I have seen her in a while and that might be due to the shorter pawnails. She has done a few sprints around the house, rolled on her back and barked and begged for food when it was appropriate. Feeding times are now 7am and 3 pm every day ... no more noon stuff.

I was finally able to focus and sit still long enough to read some books I had on the coffee table. I still cannot sit in that soft couch because it is too hard to get up and out of it based on what the doctor told me.

Nothing major planned for tonight. I am going to walk some laps around my backyard ... bake some chicken and broccoli then call it a day I thing with book reading. I'm feeling really good again today. No soreness whatsoever from the hip area.

The hounds have survived the past 19 days in fine style ... no hiccups ... no injuries ... and seem to be back to their routines of begging me for food now since they have seen me feed them.