Great News At The Doctor Appointment 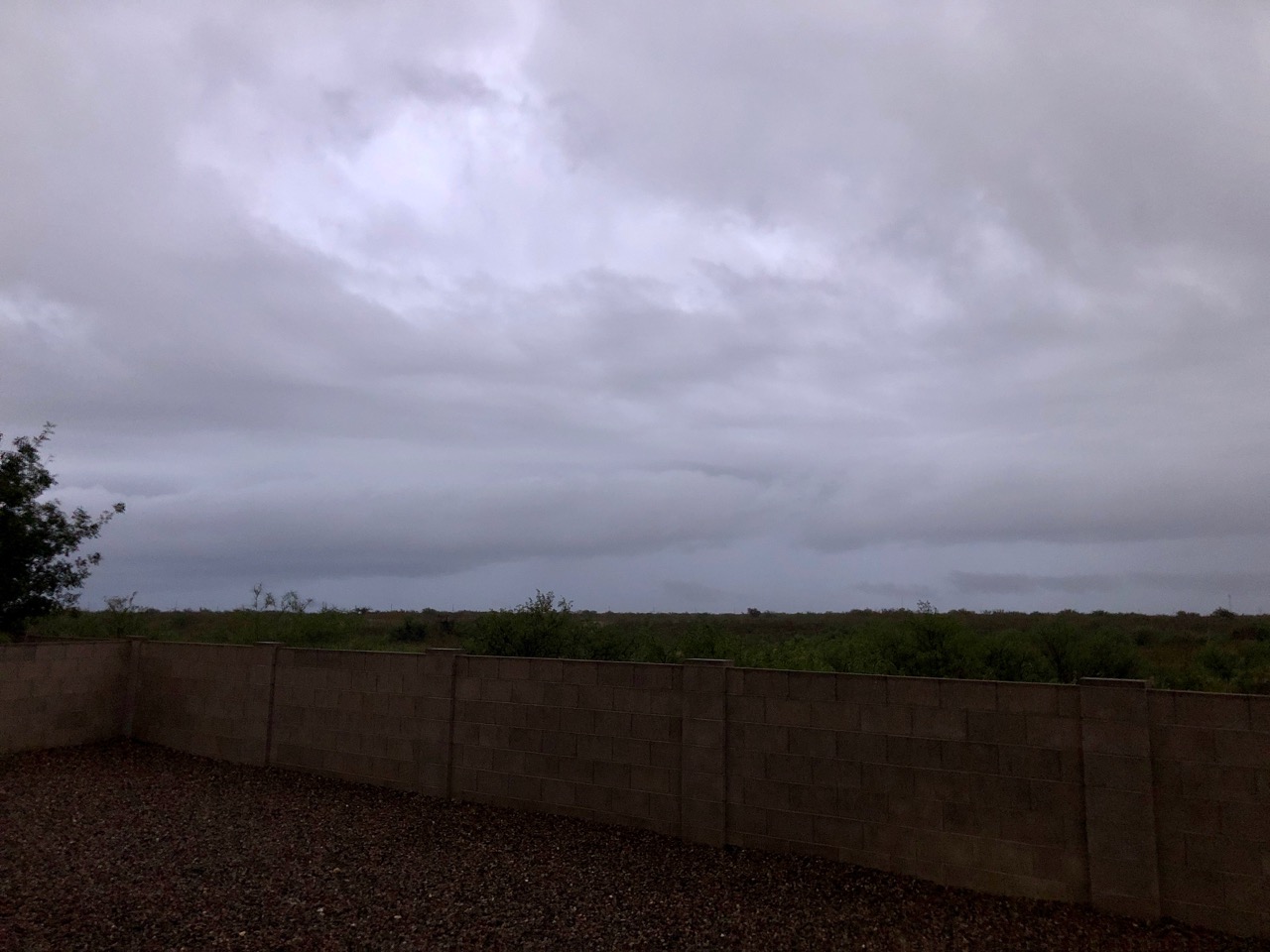 We have not had our typical monsoon this year so it tried to make up for it starting last night around 3am. By the time we got up at 5am it was in full steam ahead. My phone set off an alarm last night while sleeping for a tornado warning in Wilcox NE of us by 50-60 miles. So, we couldn't find the mountains this morning in my viewfinder. I knew I would be wearing shoes and a rain jacket to my doctor's followup appointing at 10:45am. 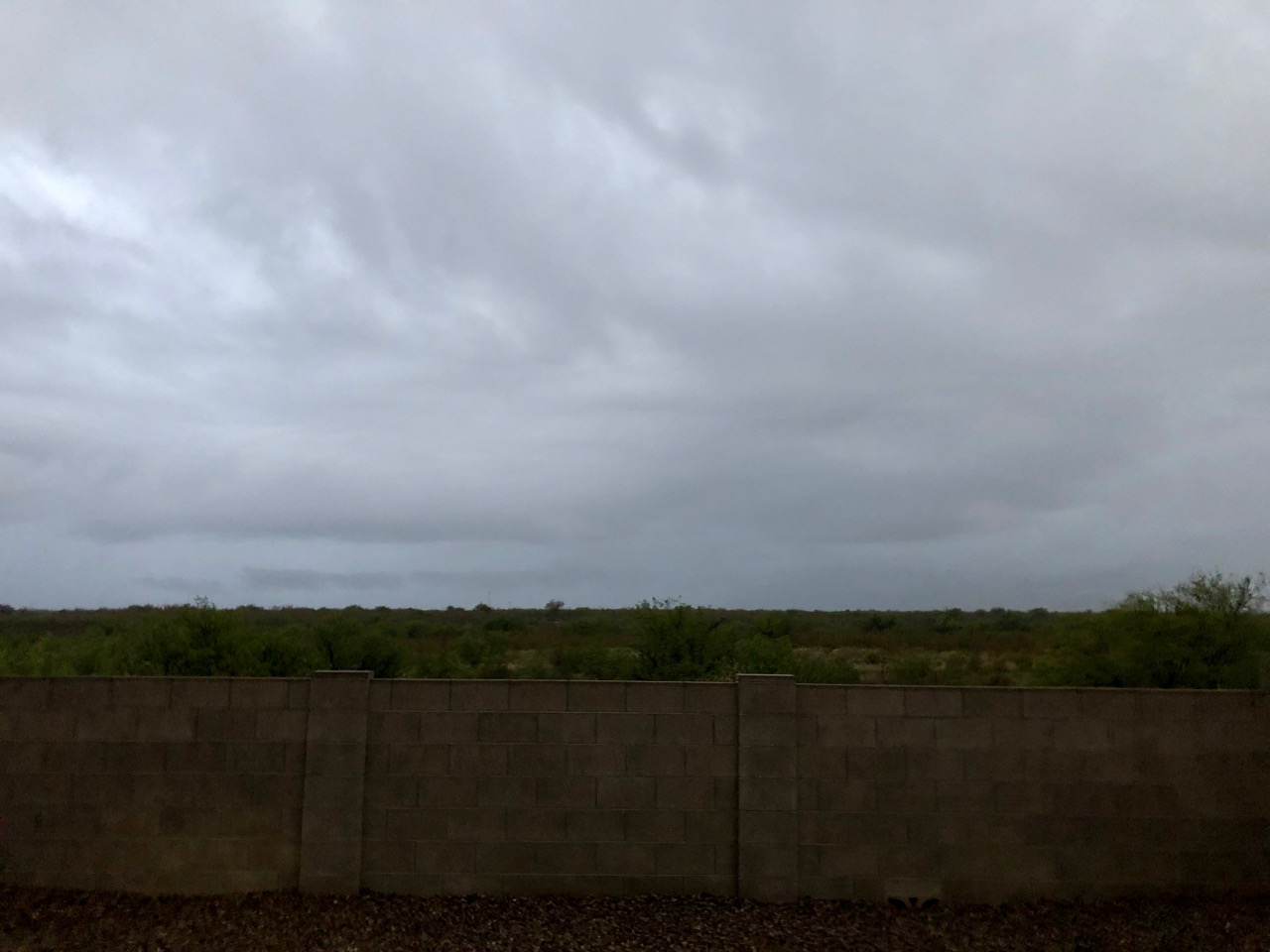 I had a good night of sleep but I noticed for the 2nd day in a row I woke up fining that big foam piece they gave me at the hospital to sleep with between my legs, had been kicked to the floor in my sleep. Was that a sign I no longer needed to use it? I'd find out the answer to that at my appointment.

I was "camping showered", shaved and ready to go by 8am. My neighbor was going to pick me up at 9am but since he was ready to start early, we left at 8:45am ... in the rain. 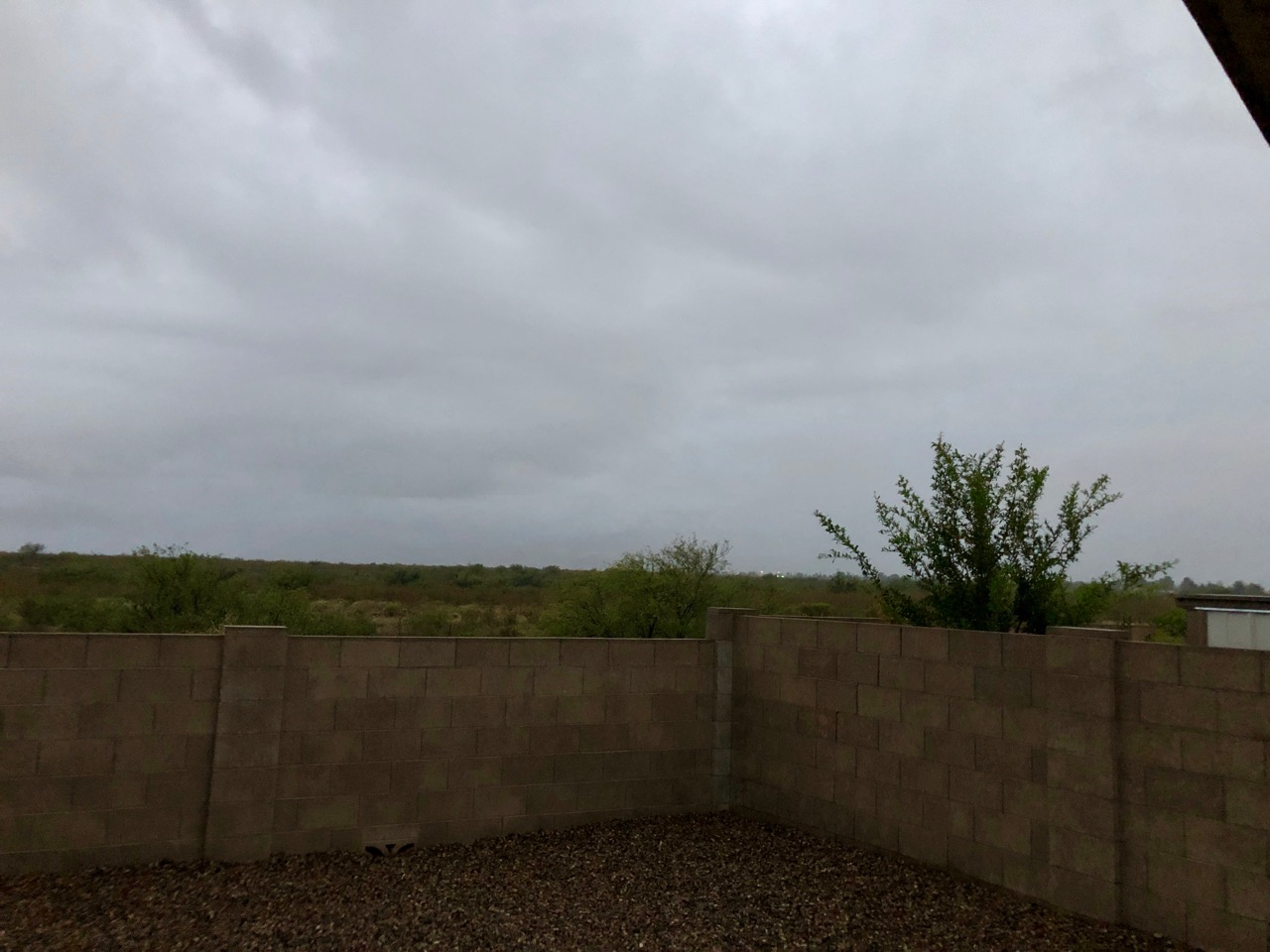 I had to stop at the post office outgoing mailbox and I needed to go to the City Dept to drop off a signed form and void check so they could take my trash and sewer payment out of my checking account automatically. They still do it the "old fashion" way instead of letting me set all of that up online. They were the last company I set up automatic payment. That will be convenient if I am ever hospitalized again ... income and all utility, tv/internet, water, trash, sewer are all paid automatically.

The more we drove around town the harder it rained. The city system of concrete washes were full of high speed water and one of the main roads out of town was having flash flooding. Twitter is great for getting those kind of emergency weather announcements. 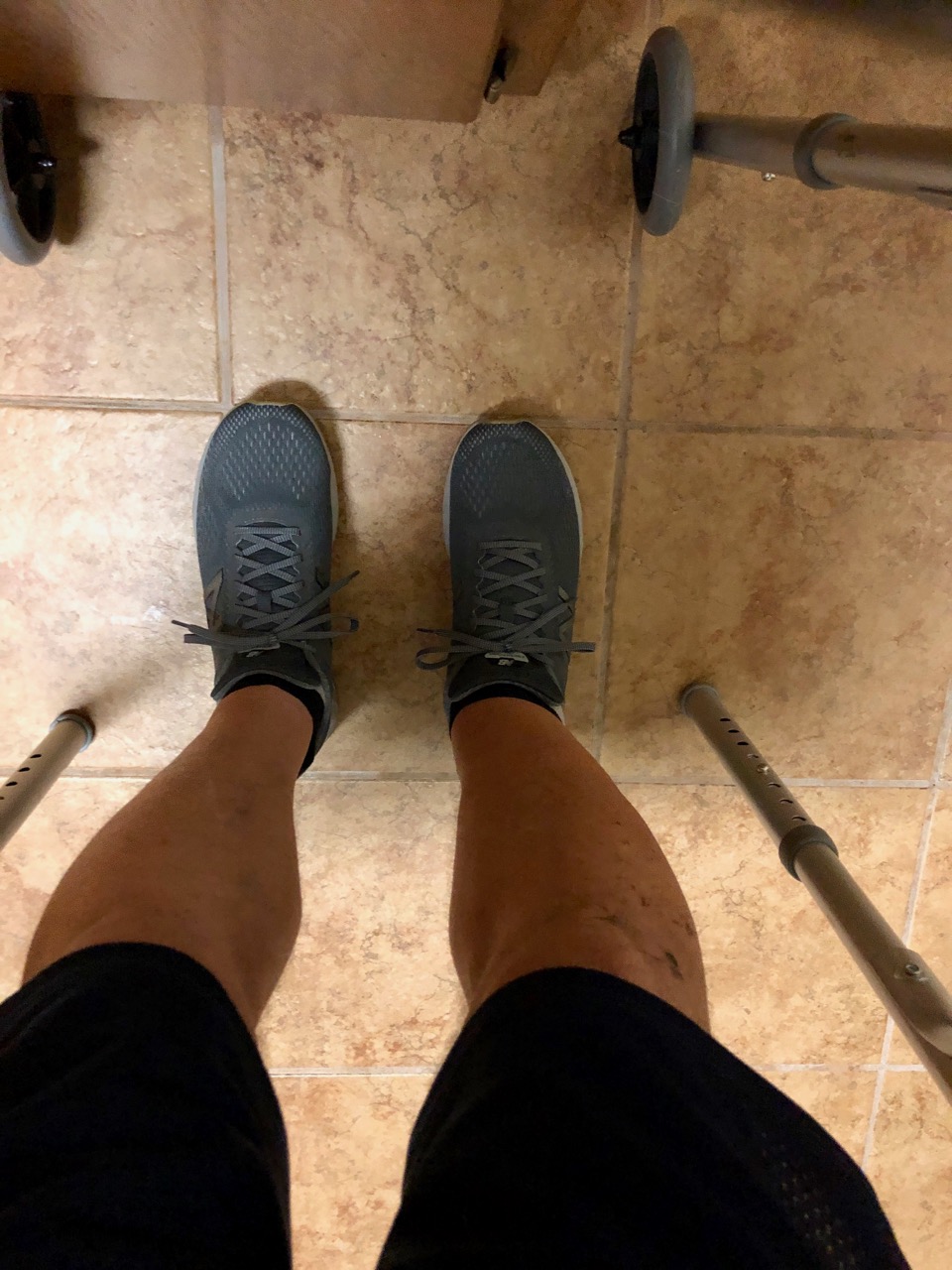 The surprise of the morning before I left was being able to fit my swollen foot into my shoe without bending over. I tried both shoes at first with no shoe strings, pulled them out at the hospital the day I left. Without raising my right leg I put the big toe inside the tongue of the shoe, grabbed that long shoe horn they gave me at the hospital and shoved my foot into the shoe with ease ... a shocker.

I thought since my foot fit inside the shoe so easy, it looked like it would if I put the shoe laces back in the shoe ... so I repeated the process and got my foot in the shoe. Now ... how to tie it? Left foot was no problem since I could raise that foot up to my chair seat. I had to be careful with the right. No twisting, couldn't raise it as high as the left.

So I broke a rule for a few seconds. I bent over more than 90° while sitting in my chair and tied that shoe as fast as possible. I never felt any pain and took my time bending over to see if I felt any kind of muscle pull in my right hip ... none.

After adding the rain jacket over my t-shirt I was ready to hit the road.

I had time to stop in at the hospital to get a copy of all my records, x-rays included, for my two day stay at the hospital. I'll get them in certified mail this week because I did not want to have Gerry take me back tomorrow just to get them.

Luckily, like me, he likes to get to appointments early. I finished all of my errands so we decided sitting in the lobby was the best thing to do as the rain continued and was non-stop hard. He brought his golf umbrella and refused to let me walk anywhere alone even with my walker.

He is the type of guy that knows everyone in town, including the receptionist. He has had some past visits to this same facility. Of course there was a 'stack' of paperwork to fill out and by the time I did that, they called me name for some new x-rays.

During the time I filled out my paperwork I found something disappointing with my Apple Watch that was connected because my phone was right there. When I went into the watch to get some contact phone numbers I could pull up the information okay BUT it showed everything but their phone number !!!! That was the one reason I wanted to buy a new watch because last January I did NOT buy one with "cellular" model to save money.

With that performance I was very hesitant in upgrading my Apple Watch. I still am as I write this post.

I received a bill this morning for the ambulance run. It was 7.2 miles from my bike wreck location to the hospital. That only cost me $114.50 But something called "BLS Emergent" cost me $1,146.38 and only $31.40 for the supplies. I was pretty happy to see the total bill was less than $1,300 which my insurance will pay.

I cannot express in words how good I feel today. Yes the hip and leg feels better than yesterday and if I didn't see my walker nearby right now I would forget that I was hurt ... it feels that normal. Only 16 days after the hip was replaced.

He watched me walk with the walker and said I looked fantastic. My incision was healed and he took off the surgical tape. After asking questions about my condition the past two weeks he told me the exercises I had been doing were not needed at this time. ALL HE WANTED ME TO DO WAS ... walk.

He gave me permission to walk inside my house without the walker but to have furniture, a table or a kitchen counter nearby in case the leg fatigues and I could catch myself. He gave me permission to walk as far as I wanted outside or until I felt the leg fatigue with the walker. So now when it's sunny in a day or two I can join those morning walks again.

Can I take Stella .... not at this time ... I cannot take any chances that a 1 in a million event would happen and make me fall.

He was really happy with my condition and my walking. I am to return for a checkup in 4 weeks, which would be the magic number of 6 weeks, which seems to be a pretty consistent amount of time of rehab to get by to "normal LIGHT" activities, possible driving and possibly walking Stella.

He did say that he understand due to my mental make up and past bicycling that I might be tempted to do more, thinking more is better like any old ex-athlete would think but in this case it is not ... walk ... heal and then walk some more.

He did say that he sewed some muscle back together that was torn in the bike wreck plus the operation for the hip replacement but that my situation was different than others because of the trauma of the wreck that caused the surgery.

I can follow those orders pretty easy and I know now that even though it does not feel like much ... I am making the progress I need to make following his schedule.

We returned home in the rain ... the hardest of all.

I let the hounds out to take a break, drank a large glass of ice water and decided to take a nap to check out how nice it would be to be able to sleep on my side again instead of my back for the first time in two weeks.

As I sat down on the edge of the bed, Heidi trotted to her bed in the corner and Stella walked to the opposite side of the room to sleep between the bed and wall. I ended up having my best sleep in two weeks by sleeping on my side with a pillow between my legs and slept longer in one period than I had in two weeks. That's a major change.

It was cold and rainy but was about to take a break until in the middle of tomorrow morning when it will start raining again tomorrow morning. I guess it plans to make up for all the days it was suppose to rain but did not the past three weeks.

With all the rain, the hounds didn't do much more than this, pictured below. 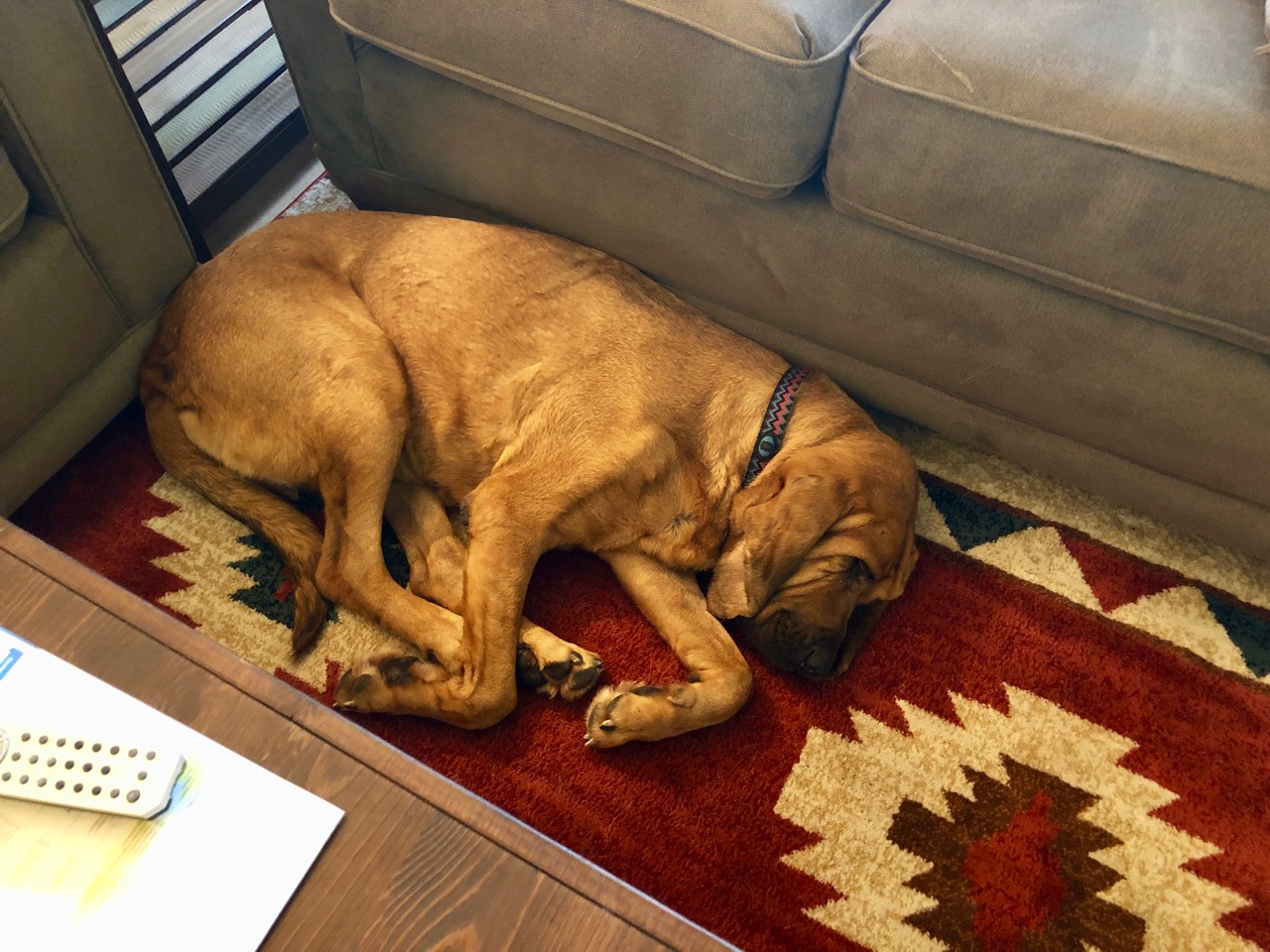 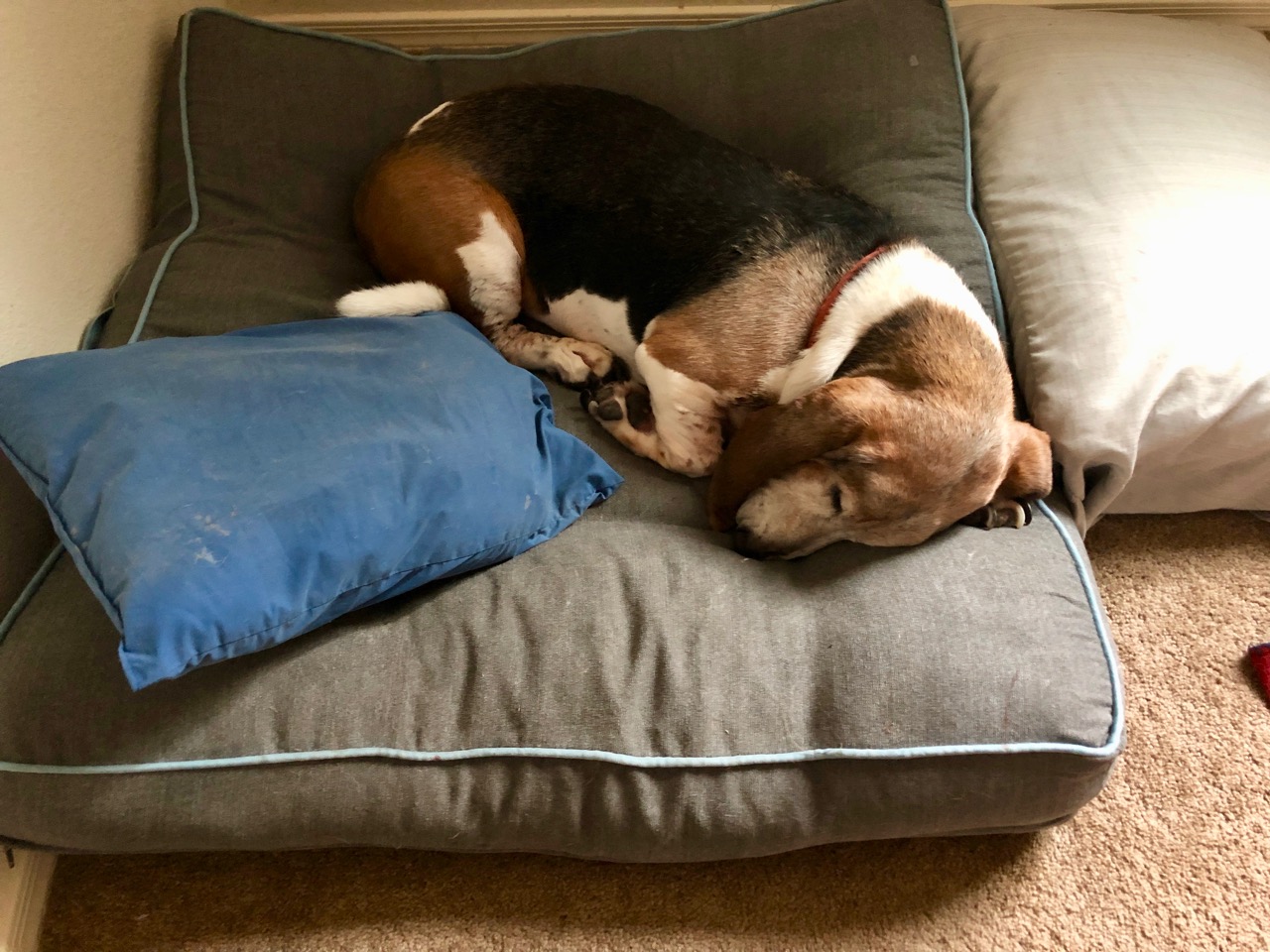 I really feel good after this doctor visit and the way I feel physically. Funny that he wants to see me again at the 6 week mark and that is when I had marked on my calendar that I MIGHT be able to drive again and I MIGHT be able to do some stuff around the house, like feed the hounds and bend over to pet Heidi.  I still have to follow the 90° limit when bending for these next 4 weeks though.

As far as the new hip popping out of place, without asking him, he told me that was a 2%-3% chance of happening within the first two weeks. So things look good there but I was still going to have to remain cautious of my movements, turning and NO twisting.

It may have been raining all day but with this news it was one of my best days in the Wild West.
at September 24, 2019
Email ThisBlogThis!Share to TwitterShare to FacebookShare to Pinterest
Labels: Dr Appointment, Hip Replacement Rehab, Hounds Sleep Through Rain, Monsoons