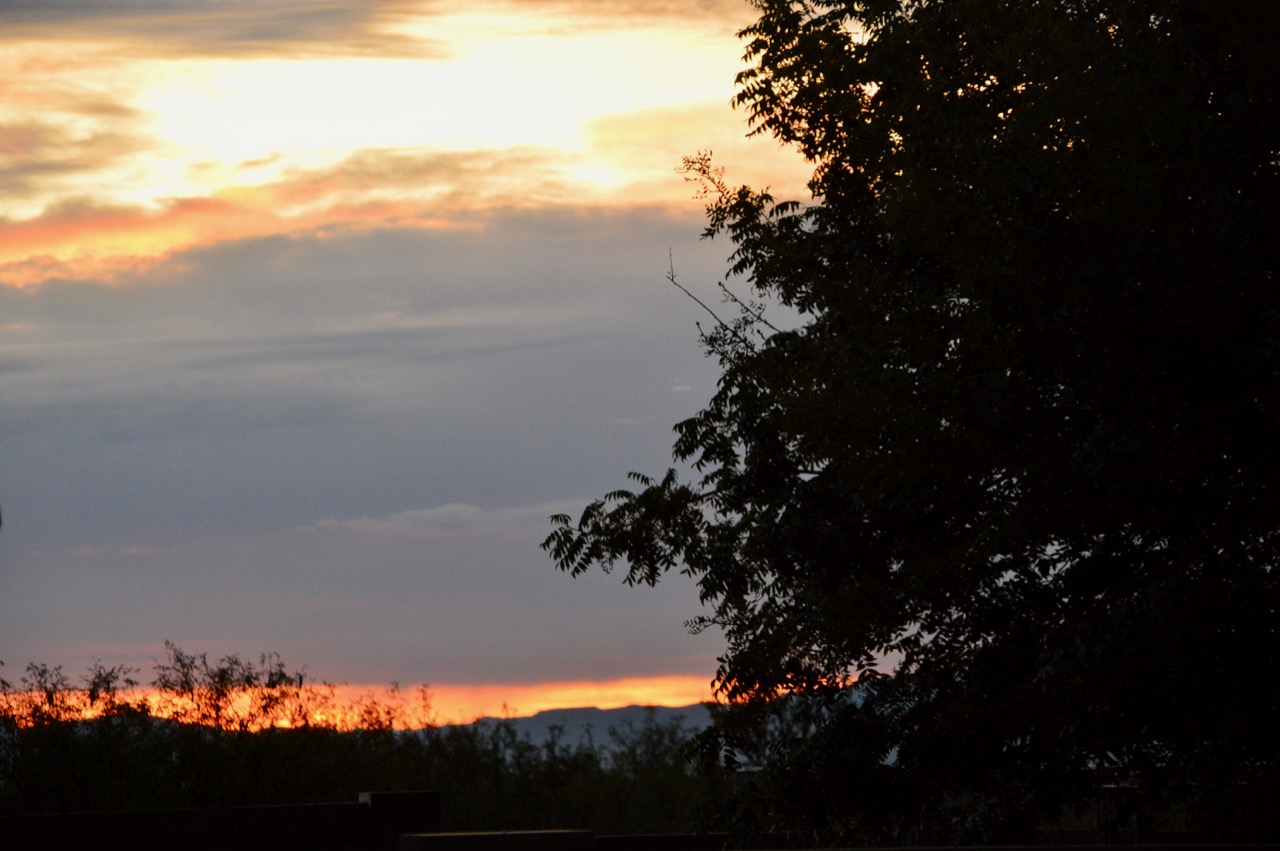 Not a lot has been going on since Stella needs to be confined to the house, can't go on walks and needs a plastic bag put over her bandage if the yard is wet. That has happened only one time although it has stormed the last three out of four nights. Heidi as you will see below doesn't change her routine much. I do believe though as the temperature cools during the day that she will start taking more walks. 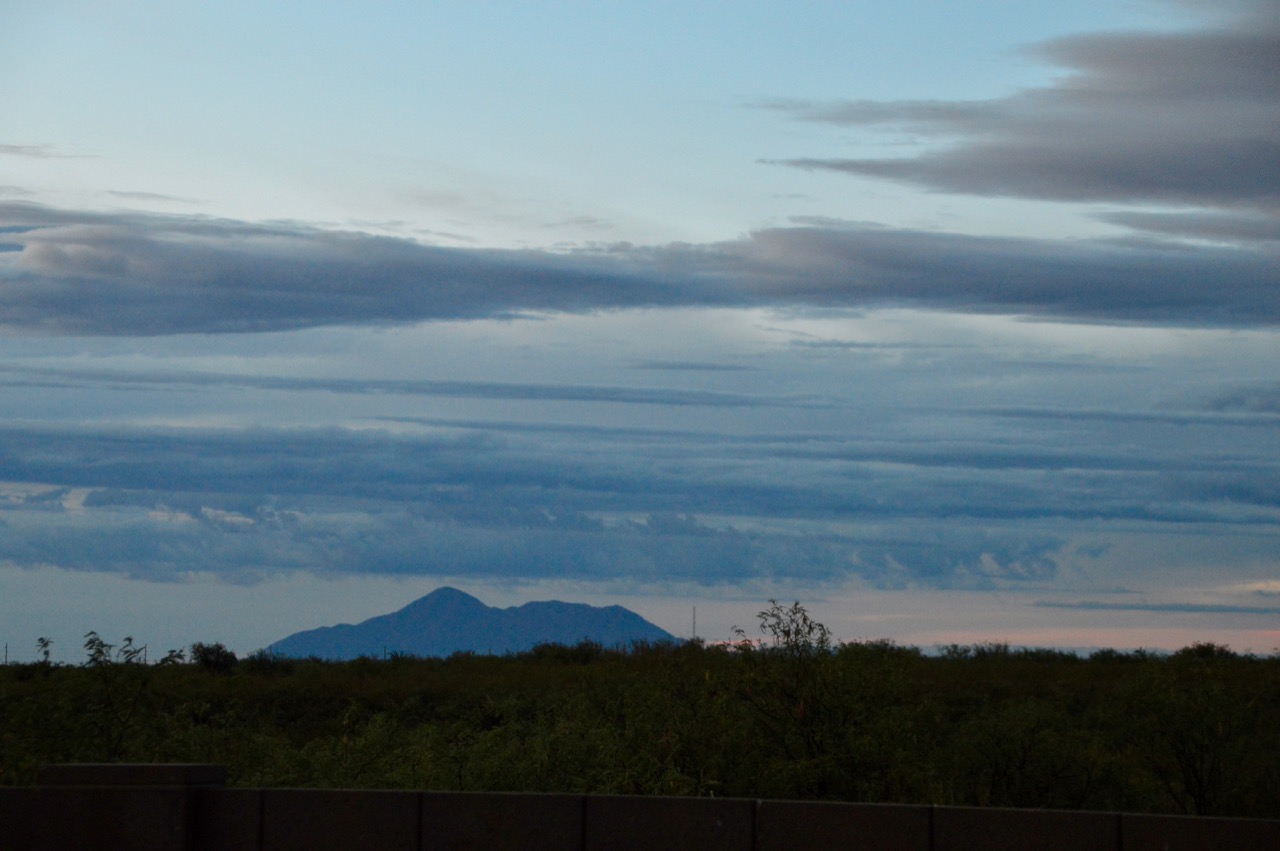 The past few days Stella had figured out that we were not walking. She was no longer whining to go on that walk yet every time I pick up the car keys she is excited and wants to go. She did that Friday morning at 10am as we headed out for her vet appointment where they would change the bandage, check the stitches and see if things were healing. 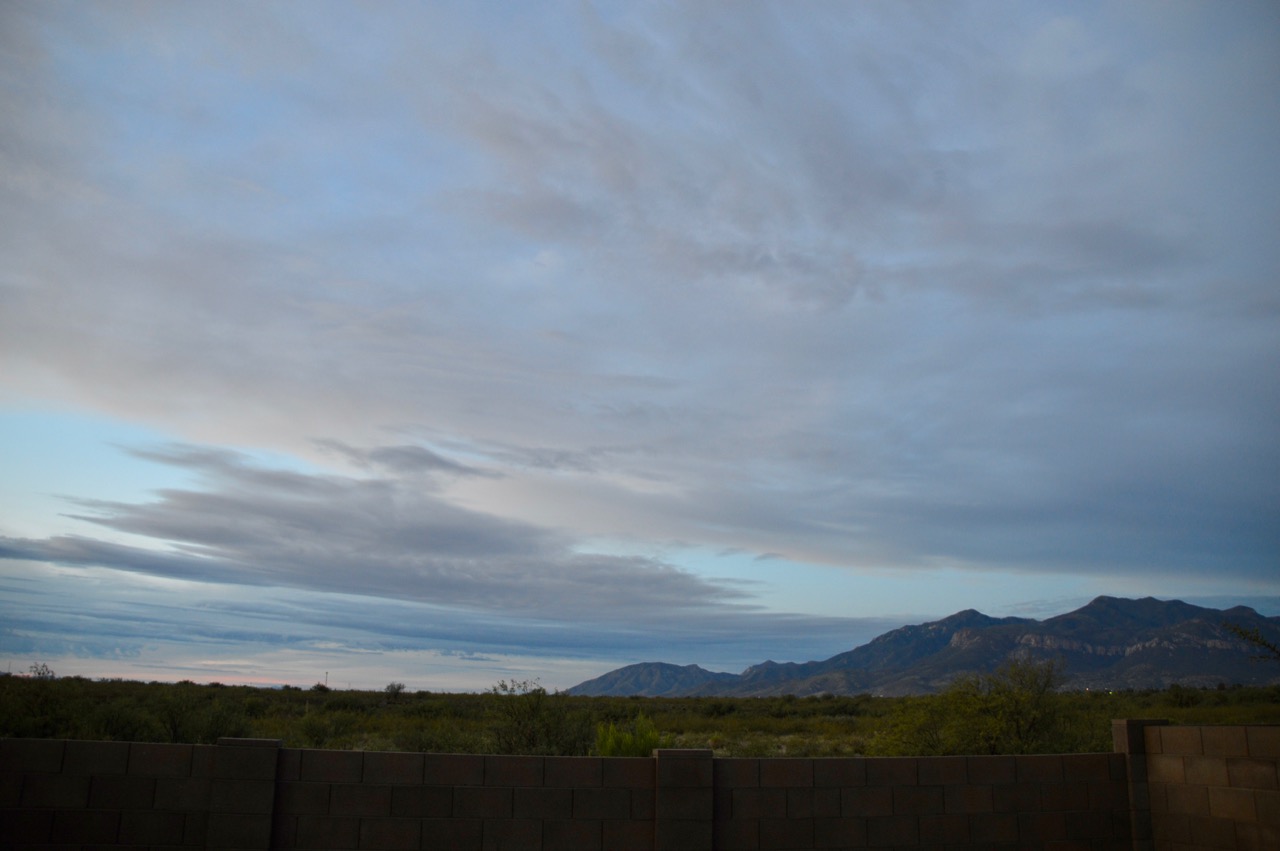 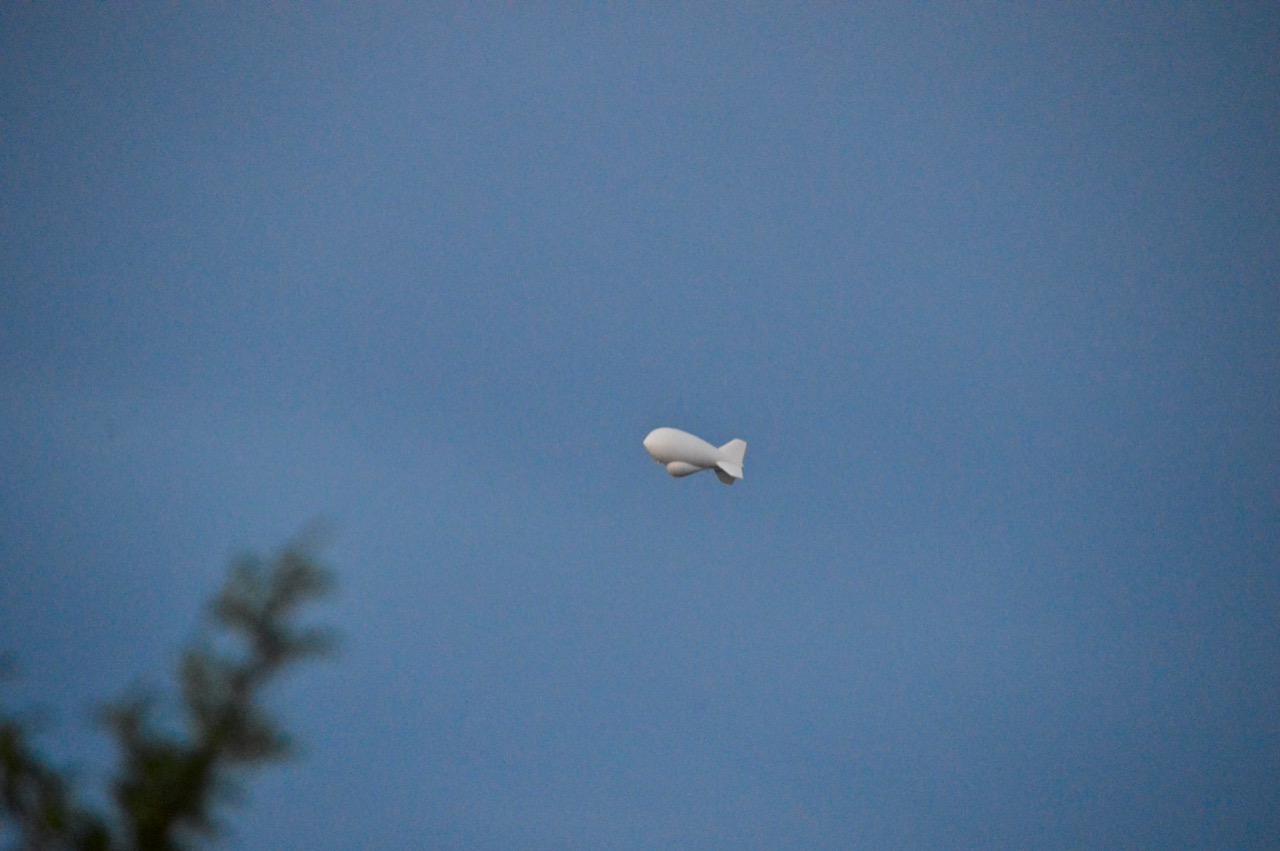 With the recent Border Patrol bust in the middle of a high traffic area in town, the Aerostat has been in the air 24/7 and I hear a lot more helicopter traffic since that news. Reports were they were caught loading cars or vans with illegal immigrants. Strange to me that they were near a high traffic area surrounded by shopping centers. I did not see anything in the paper about it but caught the news on one of my Twitter feeds. 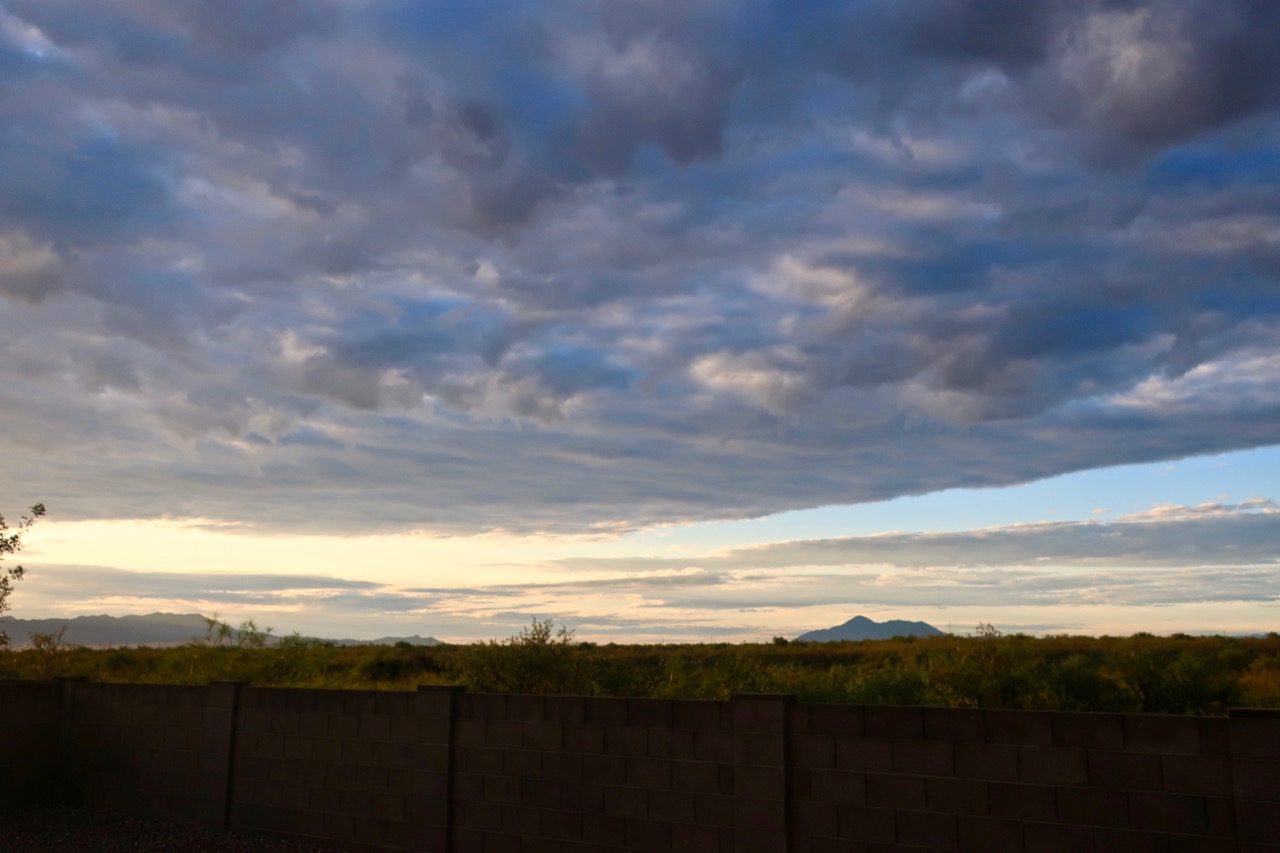 After a night of the best storm I had seen yet. 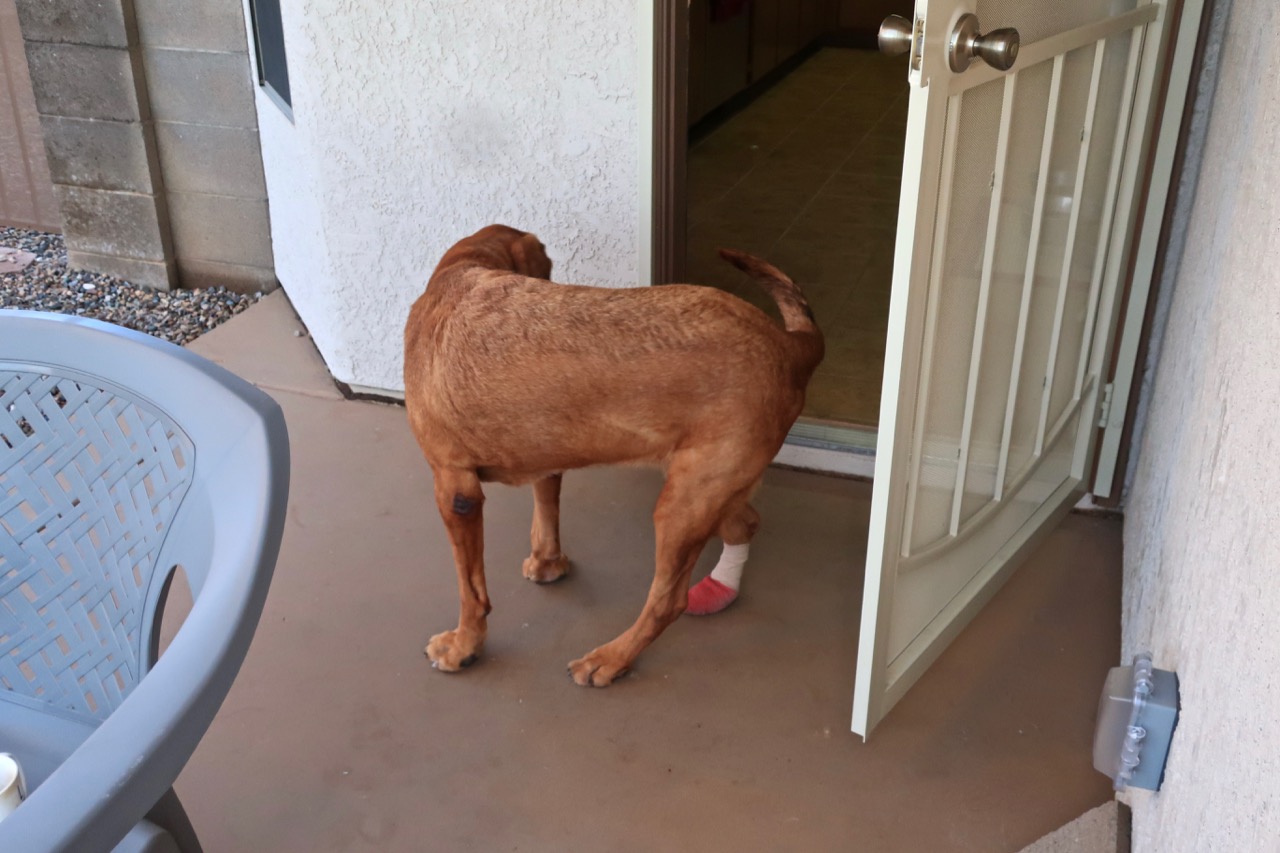 Stella doesn't mind the bandage and has not tried chewing it off. She does not limp when she walks and a few times when she thinks she has a chance to escape through the front door when I go out, she almost breaks into a trot. I did not realize until the photos I took this morning that both bandages matched colors in her collar. How is that for attention to detail at the vet office?

They received the lab results on the growth they removed from Stella's paw. It was benign. 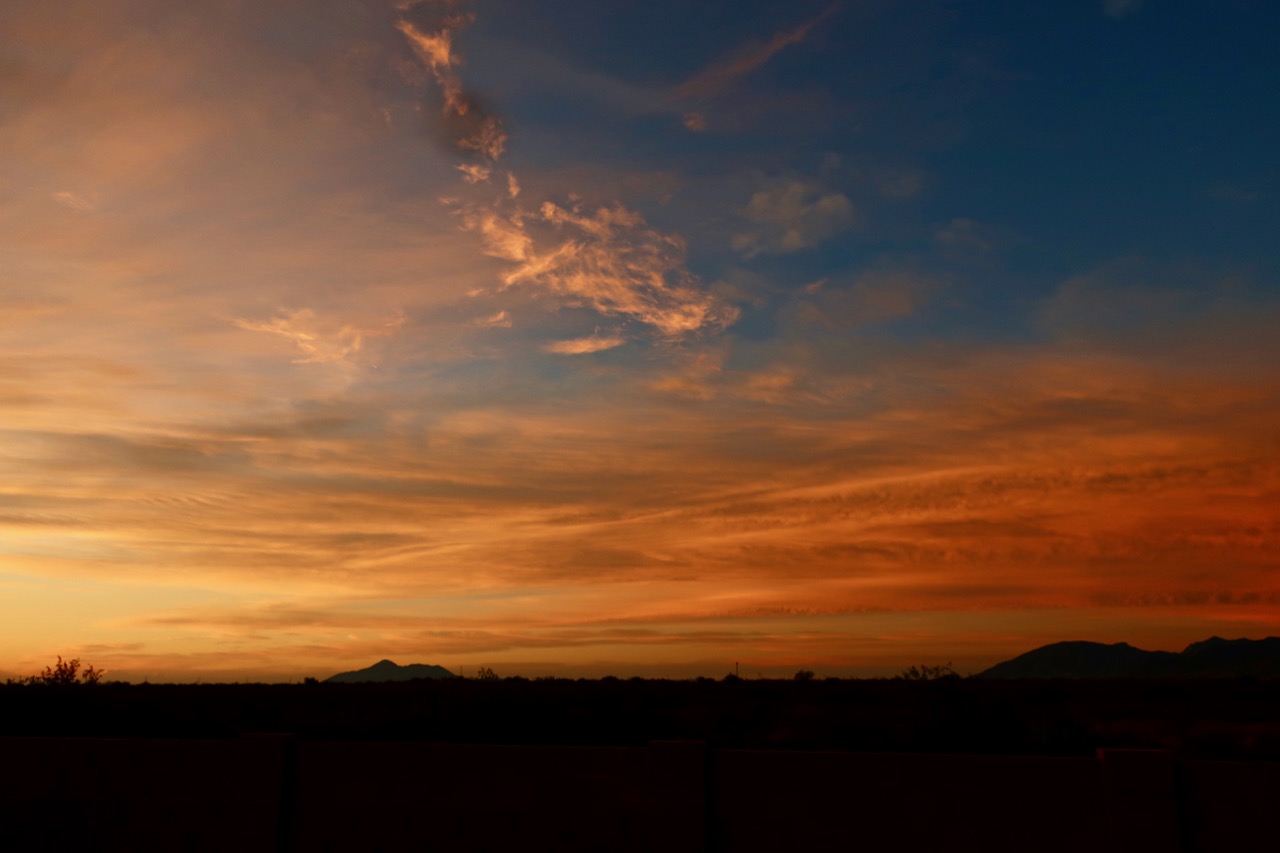 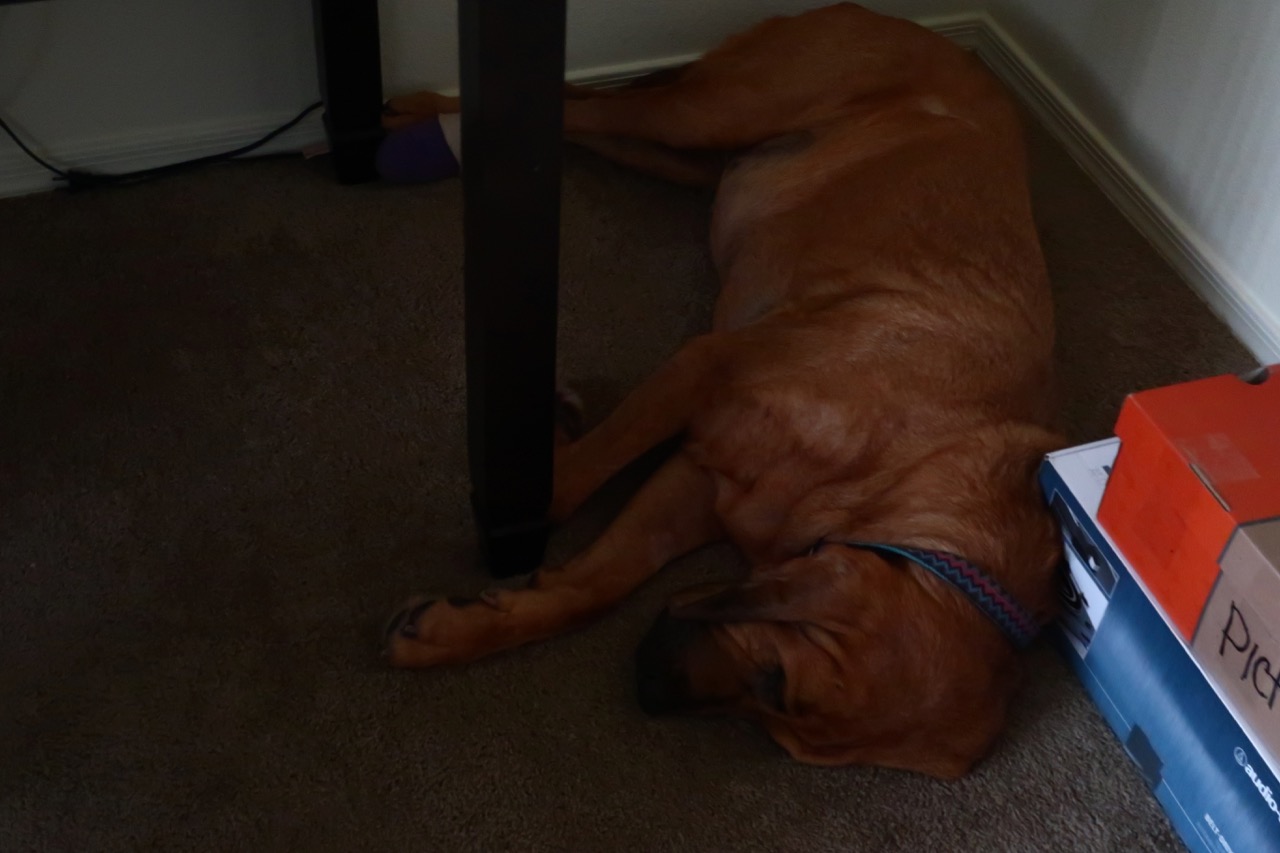 This is about all the aerobic activity Stella and Heidi get during this time for Stella's recovery. 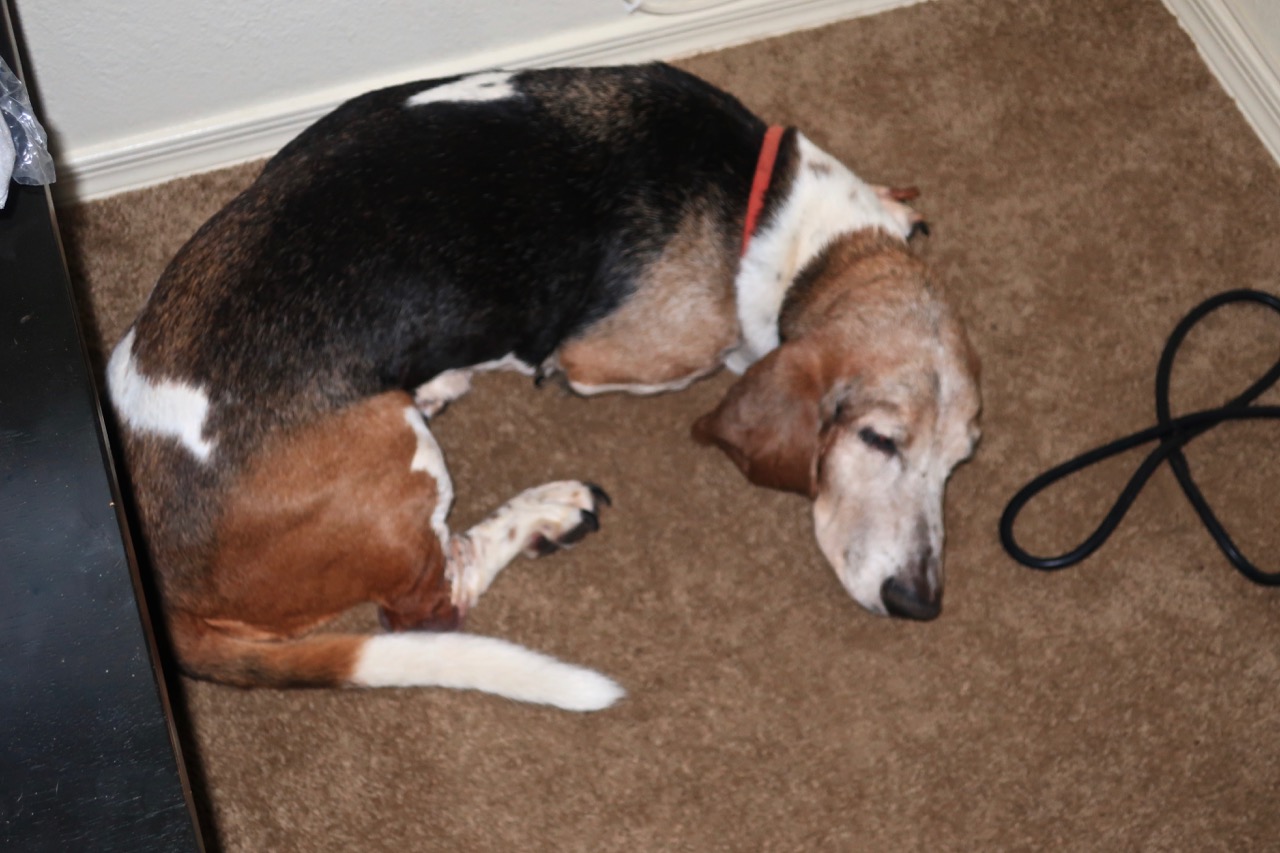 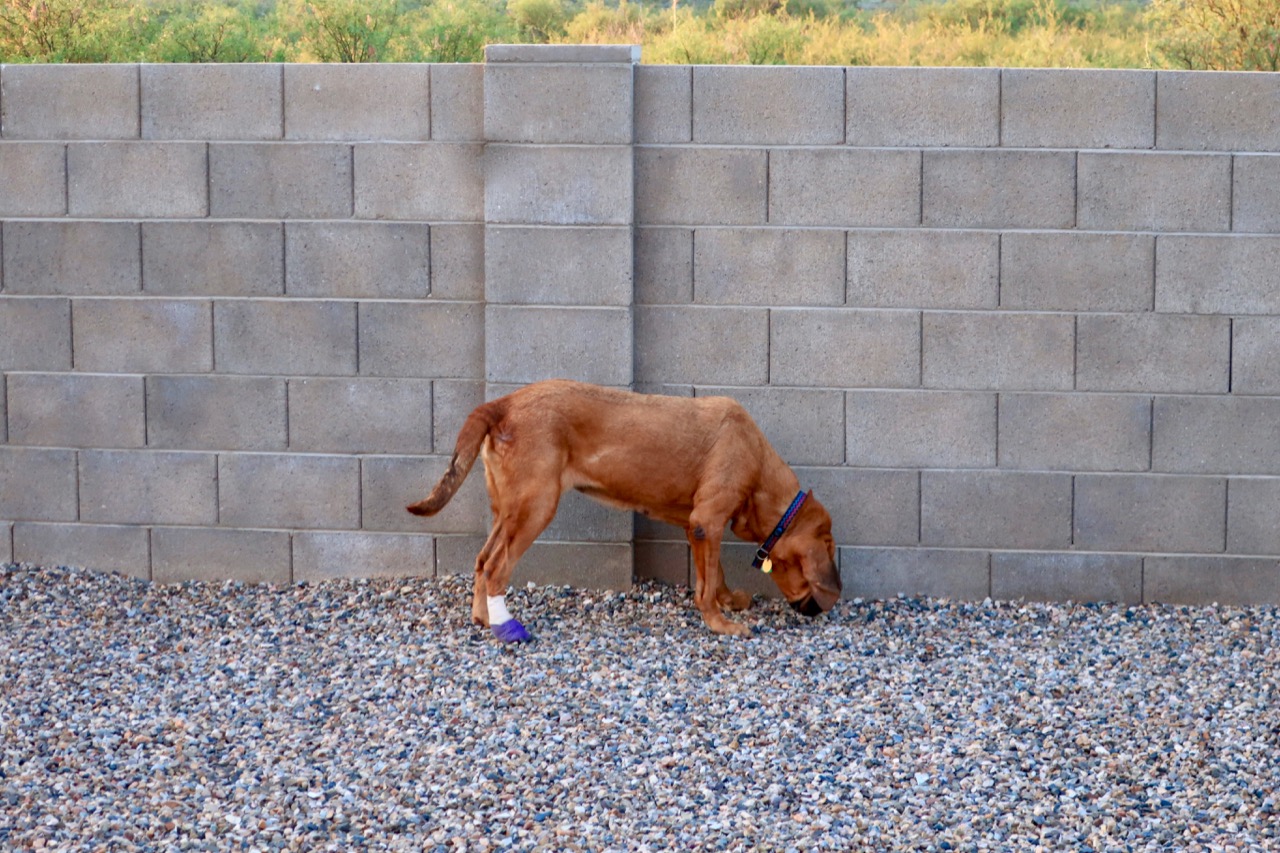 Notice the color change of the bandage on Friday ... matching colors in her collar. From pinkish red to purple. 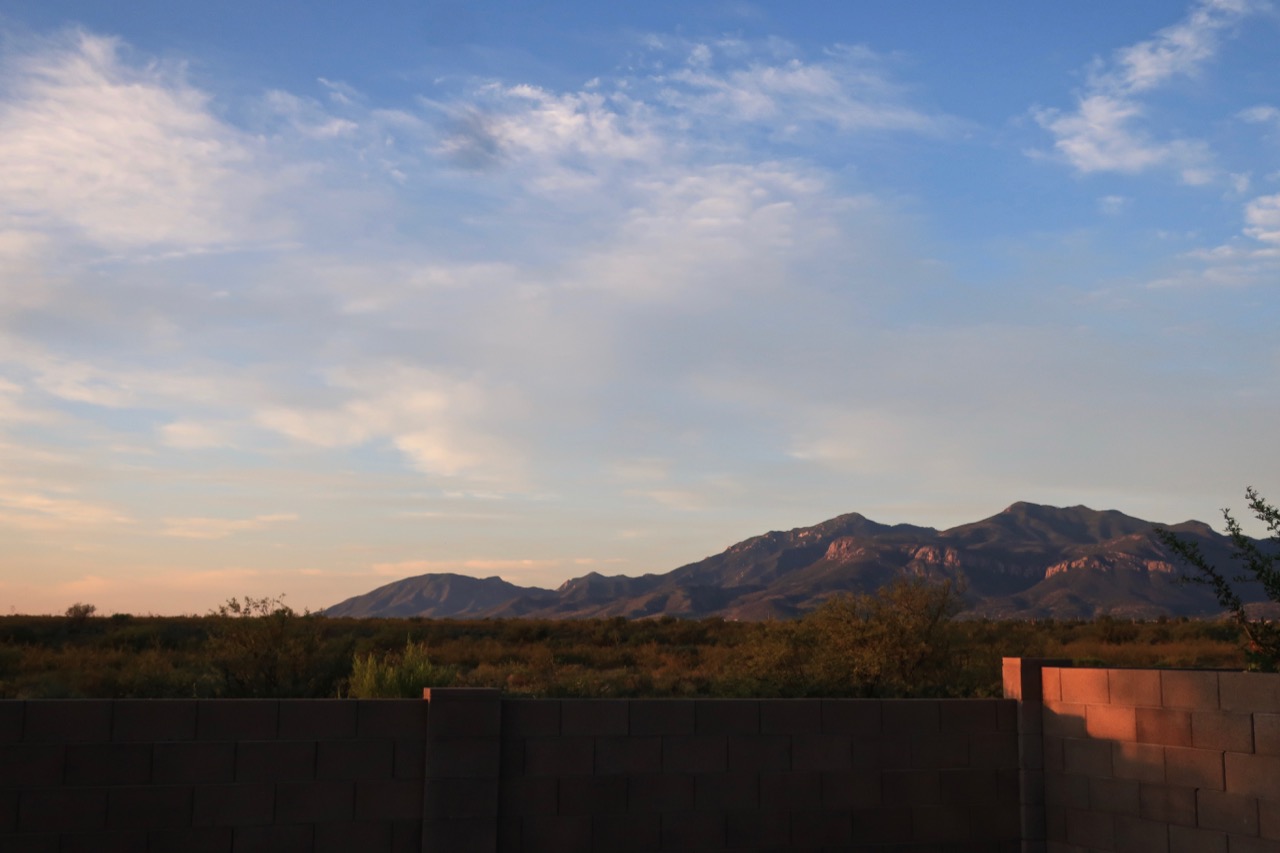 It looks this nice every morning but with a 20% chance of thunderstorms later this afternoon and tonight ... it seems like a 100% the past few nights. I saw it storm the other afternoon when the weather apps said there was only a 10% chance of rain. We have our own little weather system in this area. 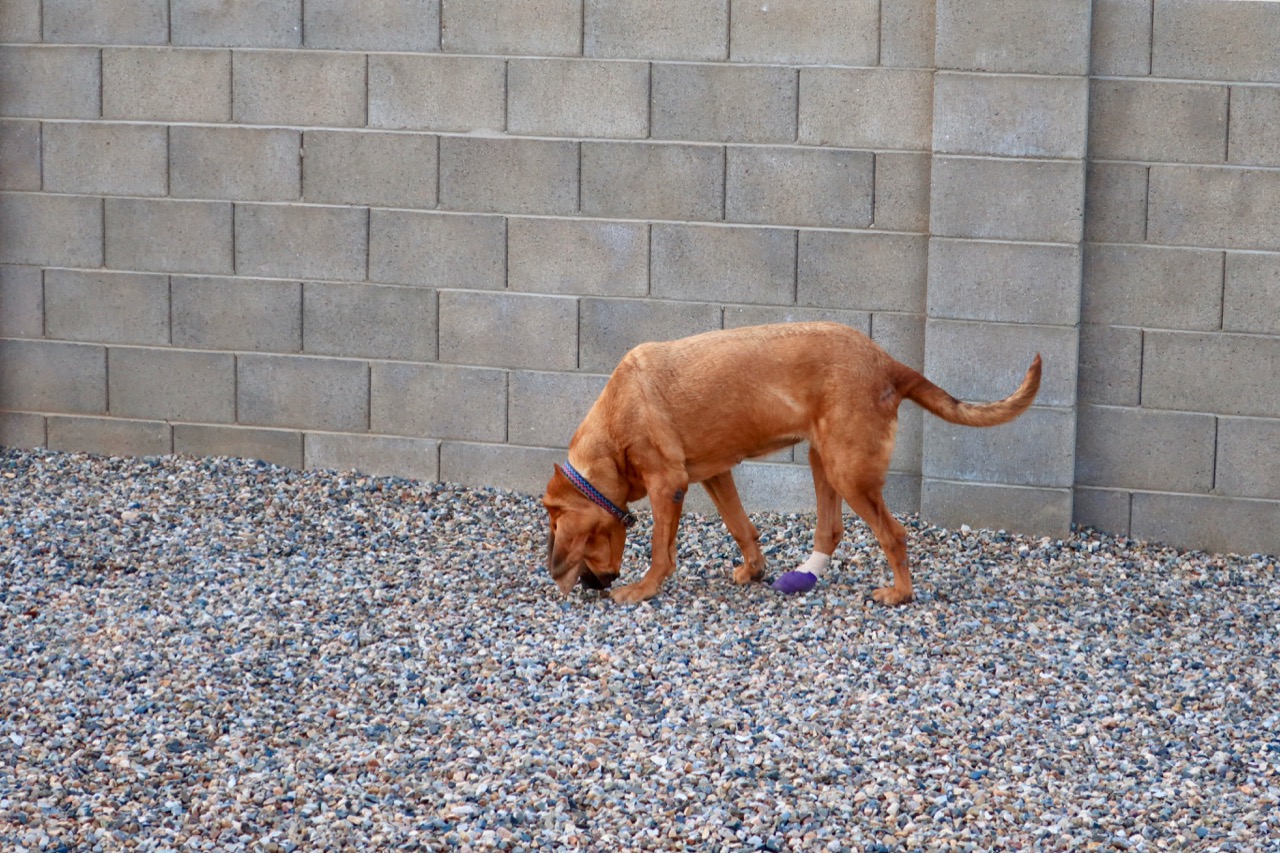 We have not seen any snakes or spiders, since I saw the snake in the driveway a few weeks ago. Stella and now Heidi move over the backyard daily with their noses to the ground in the mornings to make sure they know what kind of traffic, if any, had been there during the night. 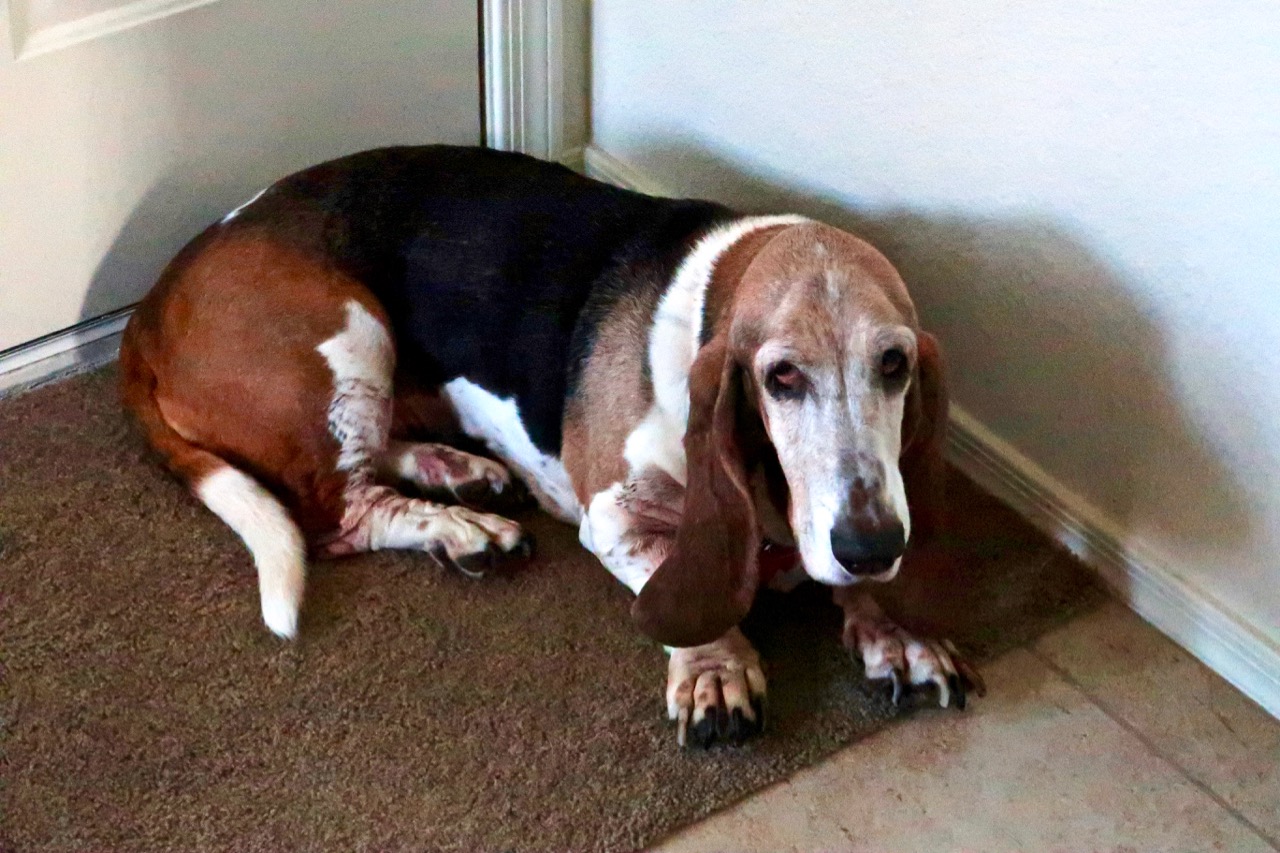 When I moved in the seller had new carpet runners in different areas of the house. I rolled up all of  them except the one by the front door. Since day one, that has been one of Heidi's favorite places to sleep or just sit and relax. She chooses that piece of carpet over her Mexican blanket that is in the opposite corner. 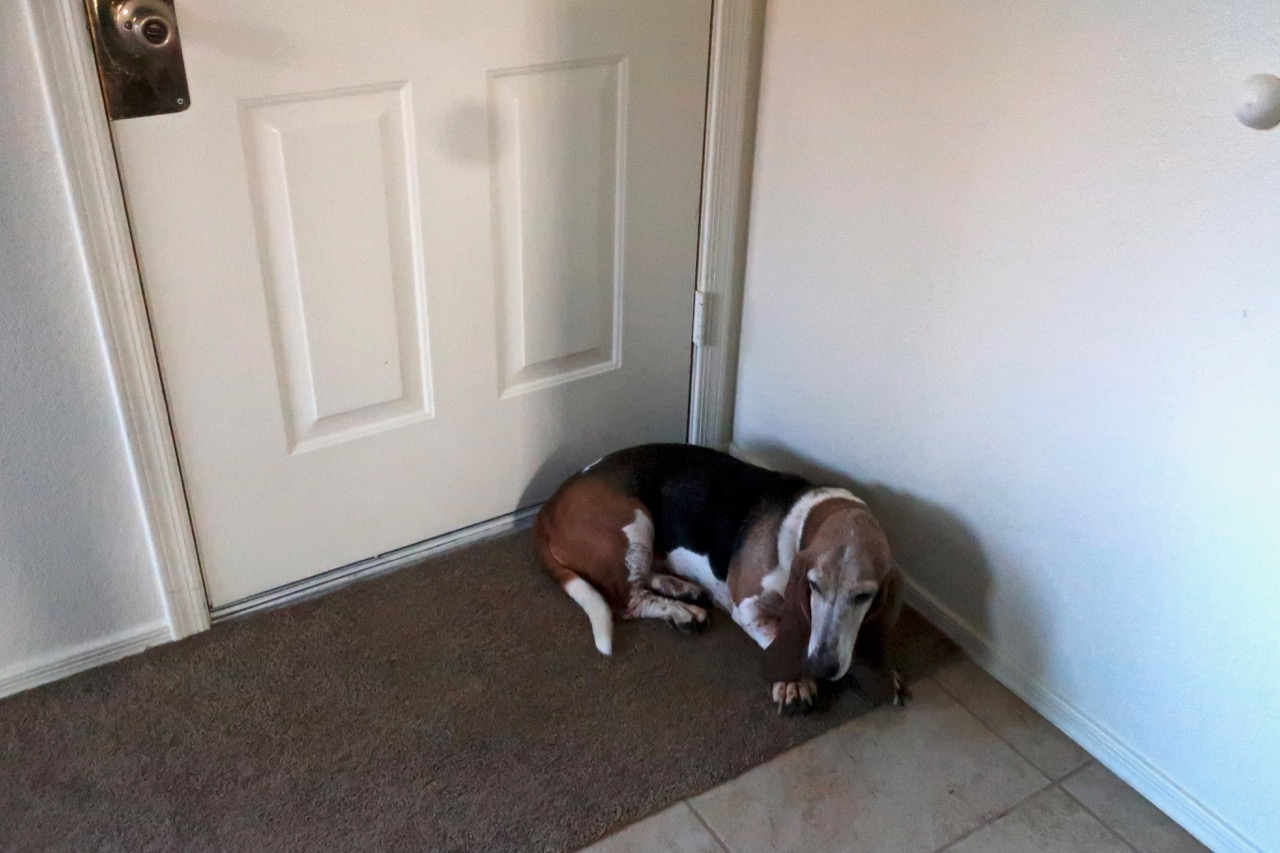 In this photo I left the spot on the door on purpose. In this post all the photos but four, were taken with the Canon G9X camera that has a black spot on the sensor. That black spot showed up after I had the camera for only 6 months. I am heading to the Canon camera forum after this to see what the solution is. I'll contact Cannon about a fix since it is still under warranty. In the other photos I erased the black spots through editing the photo.

I didn't think the four photos I posted here taken with the Nikon D3200 were that good either. I am beginning to think the best camera I have in the house is my iPhone 8+. Maybe I should start looking at and researching the new attachments they are coming out with for higher zoom capability. Currently their built in zoom is not that good.  That might be better than spending money on a different camera.

There have been times I have had the feeling that my new 2019 Toyota 4Runner TRD OffRoad is too luxurious to go off-road. It will go anywhere I want it to but it's not like the old 4Runners that felt more like a truck. This feels more like a "family suv" than an off-road vehicle. I still say that the best car Toyota ever made was the FJ Cruiser. They stopped making them.

Long time readers know what happens when my braincells start thinking about cars and analyzing. Over the past 10 years at least I have had a TON of different cars and suvs. The best combination I ever own was one FJ and one sports car. Those sports cars were either Mini Cooper S or BMW Z4's.

I might go out for a short Sunday bike ride today just to see how my finger reacts, which is in it's 7th day of healing from a very deep cut. The cut is in the way of everything I hold, from a fork, a knife or where my hands go on a pair of bicycle handlebars. I'll find out today real soon after I start riding.

College Football arrived these past three days in the Wild West.
at September 01, 2019