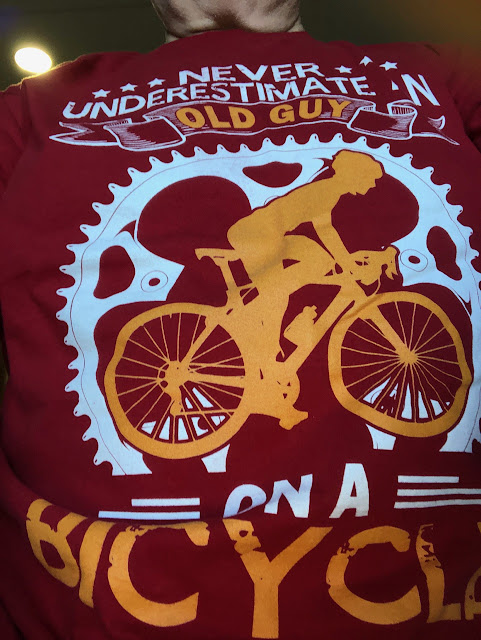 A fellow bicyclist and a PT by profession, asked me what she could do after the word got I was having some slight issues with my hip, with the hospital liking me so much they decided to keep me. She also let the hounds out and checked on them between the times my dog sitter was stopping by to feed them. Two very busy people. I told her if she could, stop by the house and bring me the loosest gym shorts I had, a pair of showed with rubber gripping soles and a t-shirt to wear for my departure. I  can't remember if this t-shirt was on top of the stack or she has a sense of humor. I told her where everything was. 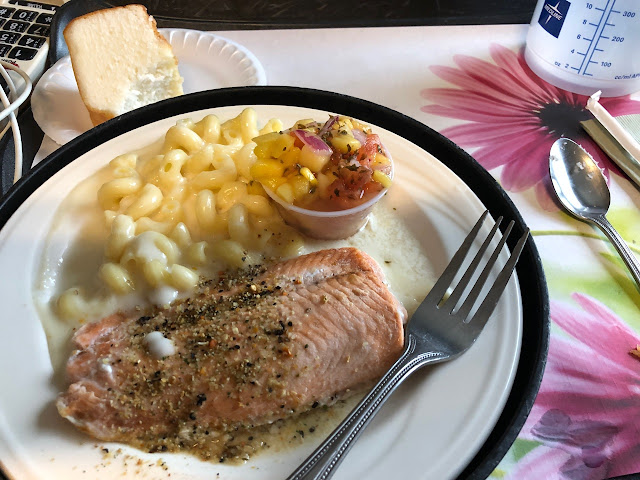 I never eat breakfast before I ride, wanting to but off fat ... so two cups of coffee is my riding fuel. With all the commotion, the changing of rooms I had forgot eat and really wasn't hungry. The nurse said it would be best to eat something before surgery the next morning at 7am. I took a look at the menu and decided to splurge ... kinda like the "last supper" just in case things took a turn for the worse.

I know ... weird comb of mac/cheese with grilled salmon with mango salsa. The fish was cooked perfect and all of the food tasted great. I decide a little piece of angel food cake wasn't too fattening for desert. 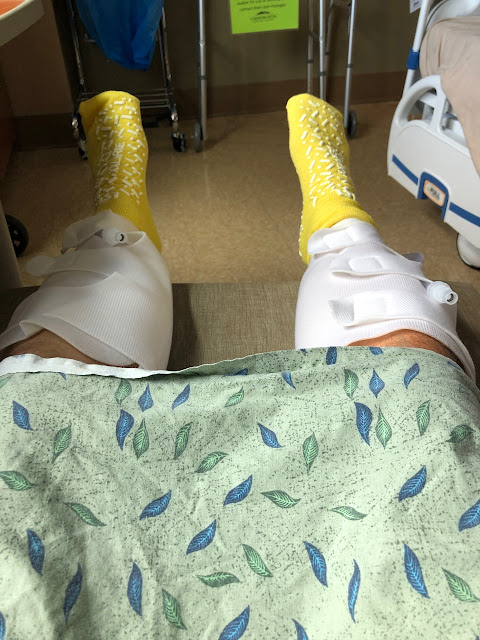 Here I am about 2-3 hours from departure. They removed those vibrators on my calves which prevents blood clots in your legs. 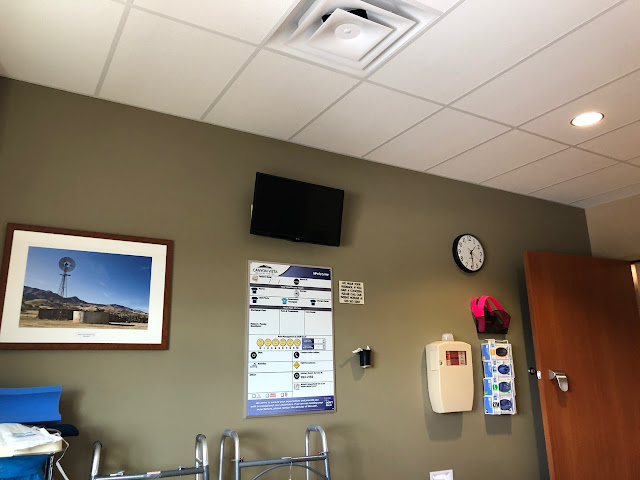 The tv screen could have been bigger but it didn't matter since I would be gone in two and a half hours based on the time on the wall clock. It looks like they didn't expect me to stay either since they did not fill out the board like it was in the other room. 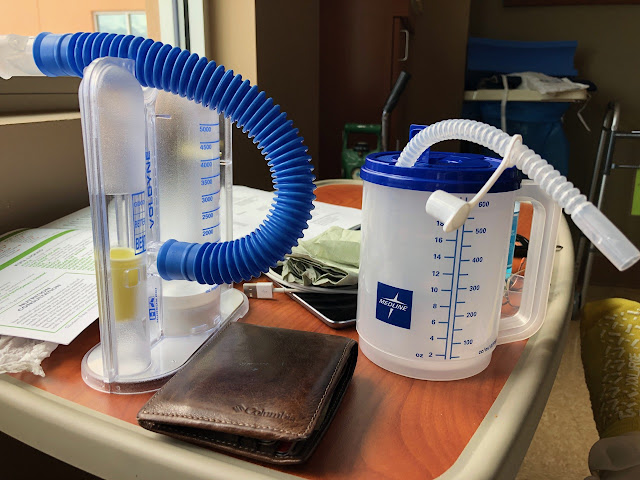 Ice water on the right, breathing apparatus on the left. I had three choices to use it ... Inhaling 1 per 6 minutes, 5 times per half hour or 10 times per hour ... inhaling as long and deep as possible. The nurse set the marker at 2500 and told me to try as hard as possible to get to 2500 ... my first attempt registered at 4000 with 5000 being the top limit. She seemed surprise just like when they asked me a million times to fill out their forms ... "you don't take meds at home, you don't have a walker??? nor an oxygen tank?"  No family doctor to list, last physical in 2002 only because it was a job requirement even had the doctors rolling their eyes.  LOL 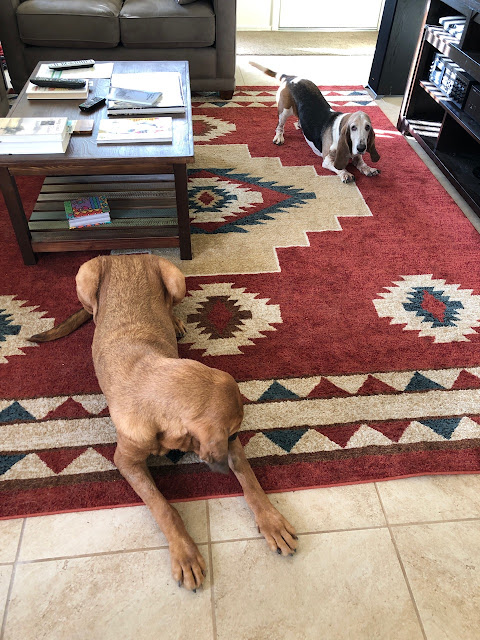 My neighbor made sure I would not be walking up any slanted driveway. He pulled his Jeep Liberty into my garage two steps from the door that goes into the house. All flooring was level. I am his third "patient" in three years with either knee or hip replacements. He is many years older than me and basically told me he would do anything I needed during this recovery. He is experienced in this kind of work ... 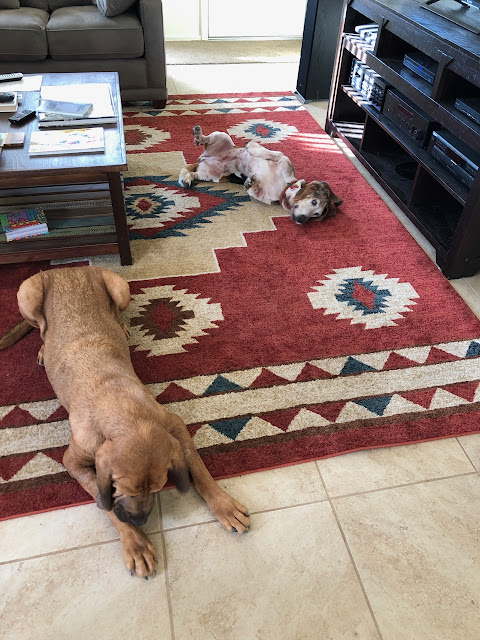 As you see the hounds were not that excited ... just another day in the world of hounds "oh you're home? Can you feed us?" ... LOL 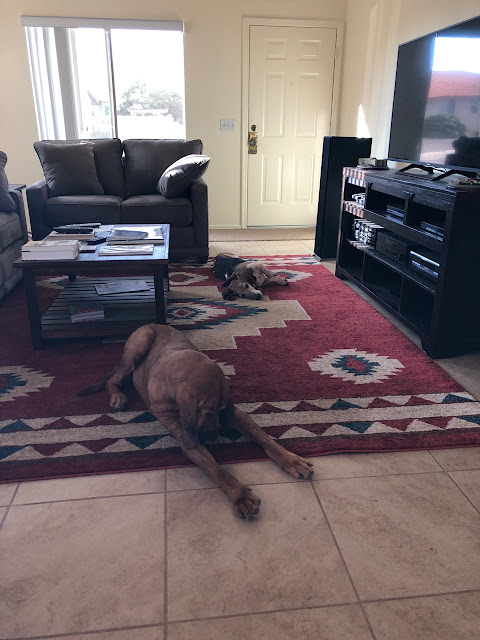 As I unpacked my bags of bike clothes, hospital equipment to use as the hounds kicked back and enjoyed the cold AC. 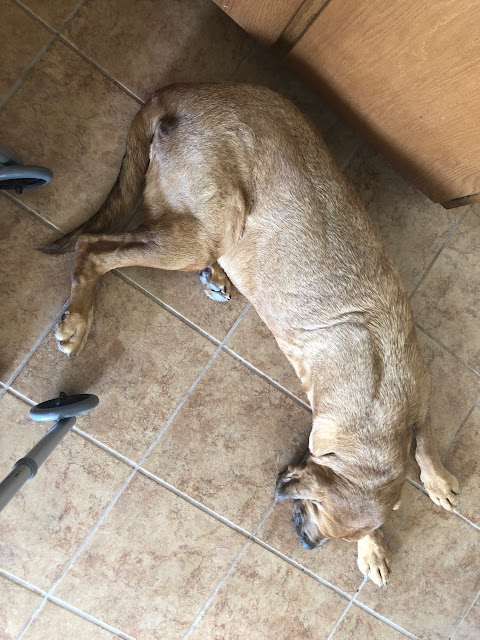 Stella got curious this morning. She moved her head under the front of the walker after smelling every inch of it. I led her out of that and to the side so I could pet her. She and Heidi have been no trouble, never causing me to stumble or fall, have never walked into me and strangely have not be begging for food at their normal times. They have connected to the dog sitter and likes her. She will still continue to come in the morning and afternoon to feed them since I am not allowed to bend over more than 90° for a few weeks or there is a chance the new hip will pop out of joint. 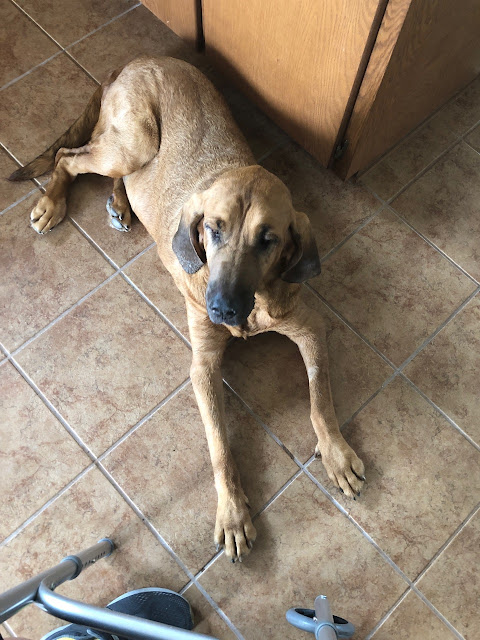 As you can tell from the photo above, Stella wasn't too interested in moving out of her sleeping spot. Even when I asked her to move so I would ask around her ... she looked at me and didn't move ... until i nudged her paw with my walker.

I am remembering the rules they gave me when they sent me home. Not a lot of them but very important ones. I slept from 7:30pm to 3am solid sleep since I was not woken up every hour for either more blood tests, lab work or to get my vital signs. But I knew as I "rolled" to the bathroom that it would wake up Heidi and then wake up Stella. I let her out after I was finished but told both of them there was no way were were starting our day at 3am.

I got out and back in bed three different times without experiencing a lot of pain. Although I have to pay attention to what I am doing, go slow, even in the middle of the night. By 6am I was up with the walker in front of me, walking around the house and opening all the windows for that cool morning breeze.

I caught up on return phone calls, texts and some emails. I have gradually been moving things I use to a higher level so I don't have to bend over to get them. That tool is a big help. I also used that to get my socks off, change into some clean socks and even put my shoes on by myself, without any laces. Did a quick camping shower from the waist above, shaved and changed t-shirts.

Today's walk has consisted most of walking slow and lifting each leg with pronounced steps. Due to the way they had to move my knee during surgery, I hate think what that looked like, my right knee is probably more sore than my right hip.

I'm doing okay. So far keeping UNfrustrated and realizing this is going to take a while. I have a lot of books to read, ballgames to watch during that time. Right now I have time for a mid-afternoon siesta.

All three of us are sound to sleep in the afternoon of the Wild West.
at September 10, 2019
Email ThisBlogThis!Share to TwitterShare to FacebookShare to Pinterest
Labels: Hip PT, Hip Replacement, The Pet Nanny