Yes I Calmed Down Today 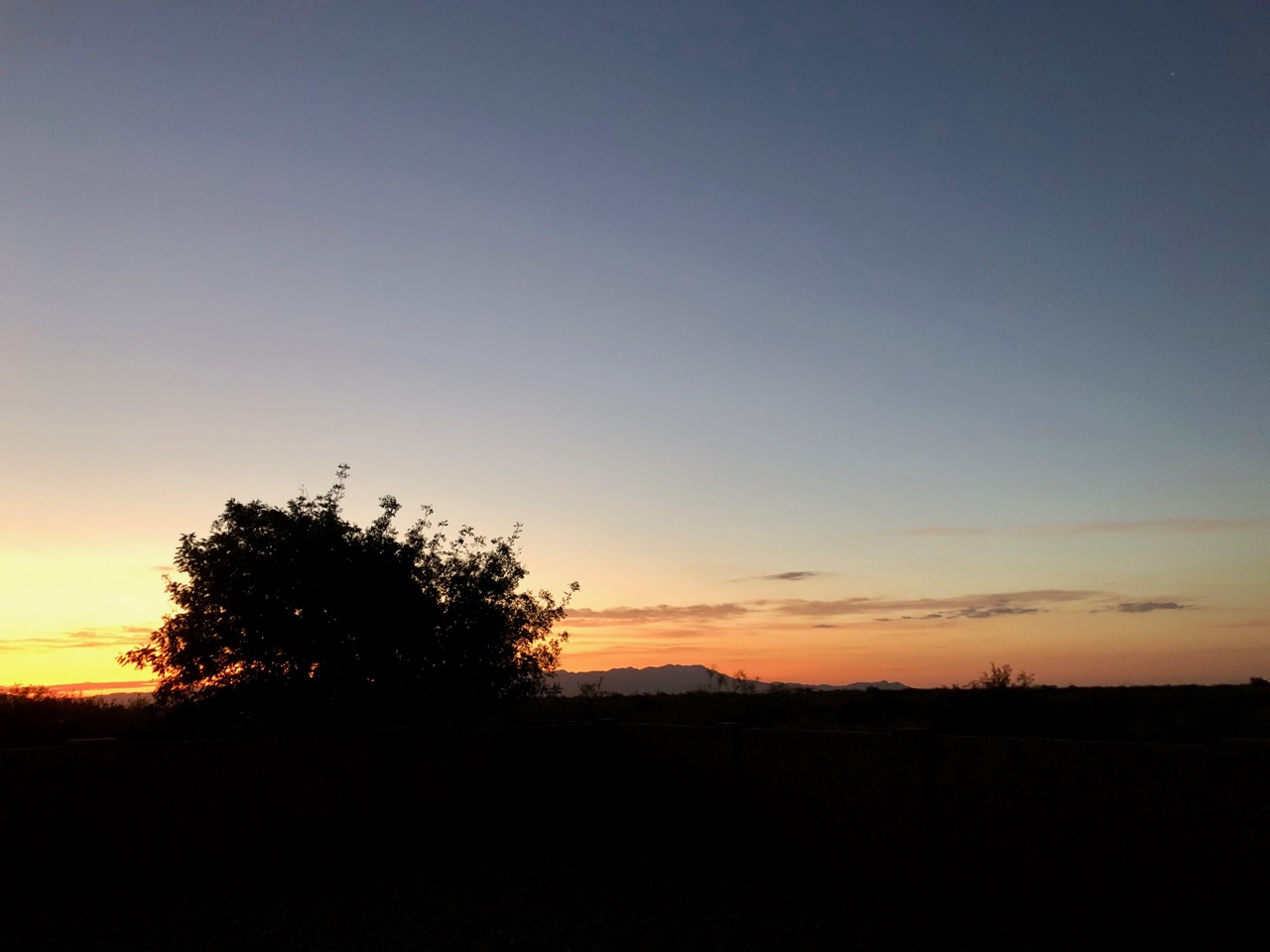 I'll be brief tonight and no ranting or raving. It was a nice day. I did get out in public, driving on public streets, walking into stores without any hassles or arguments with idiots. After waking up at 1am and then every hour on the hour until 5:10am ... to let Heidi outside to pee ... the sunrise was a bonus as I sat outside waiting for my coffee to finish. I needed coffee in the worst way this morning. Those are the Mule Mountains over there towards the Bisbee area. 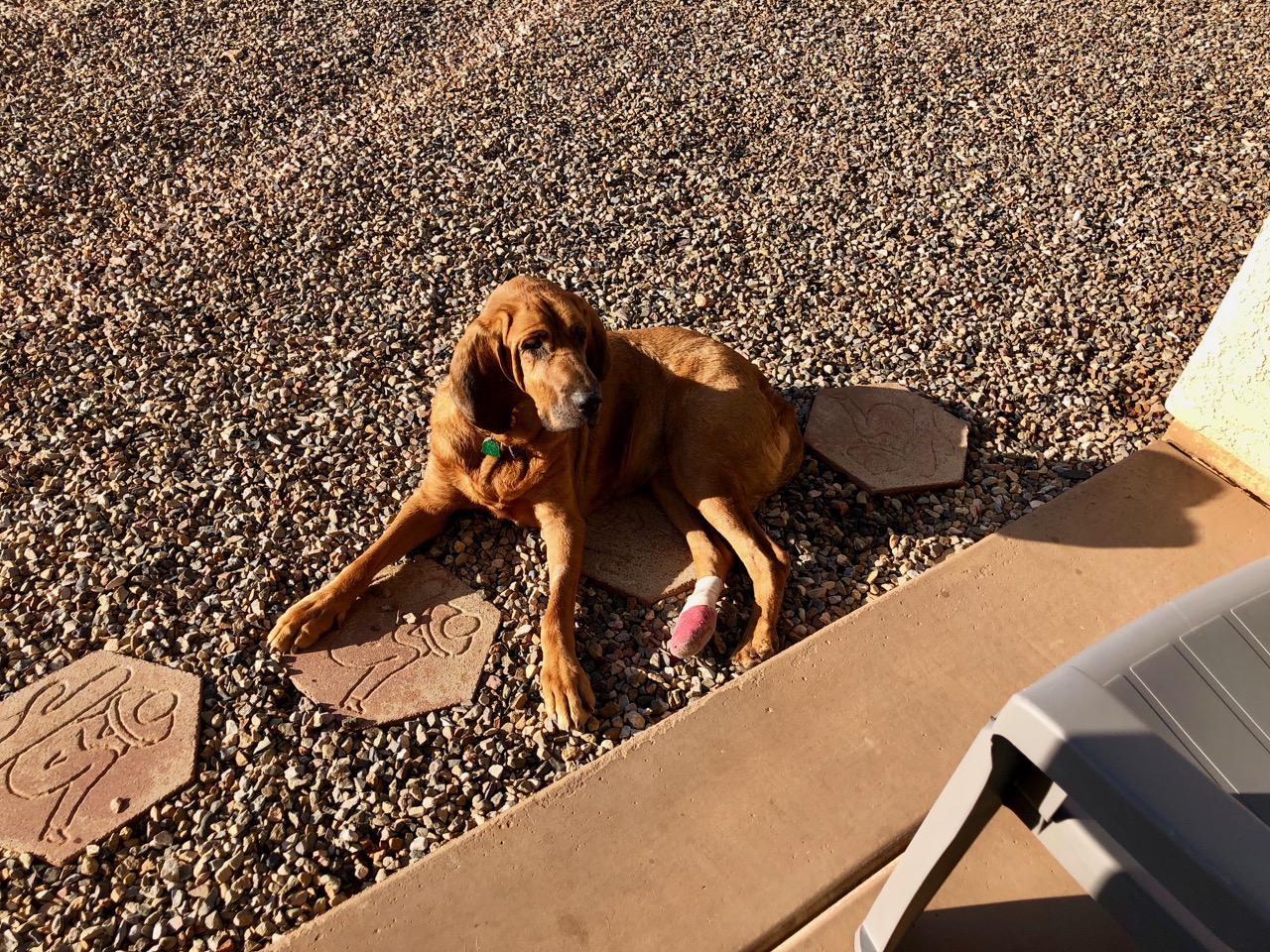 A few hours later I looked around the computer room, the living room and the bedroom ... Stella had disappeared. It was good to see actually, that she had decide it was safe and did not have to follow me everywhere I go ... she was taking some early sunshine in this morning. 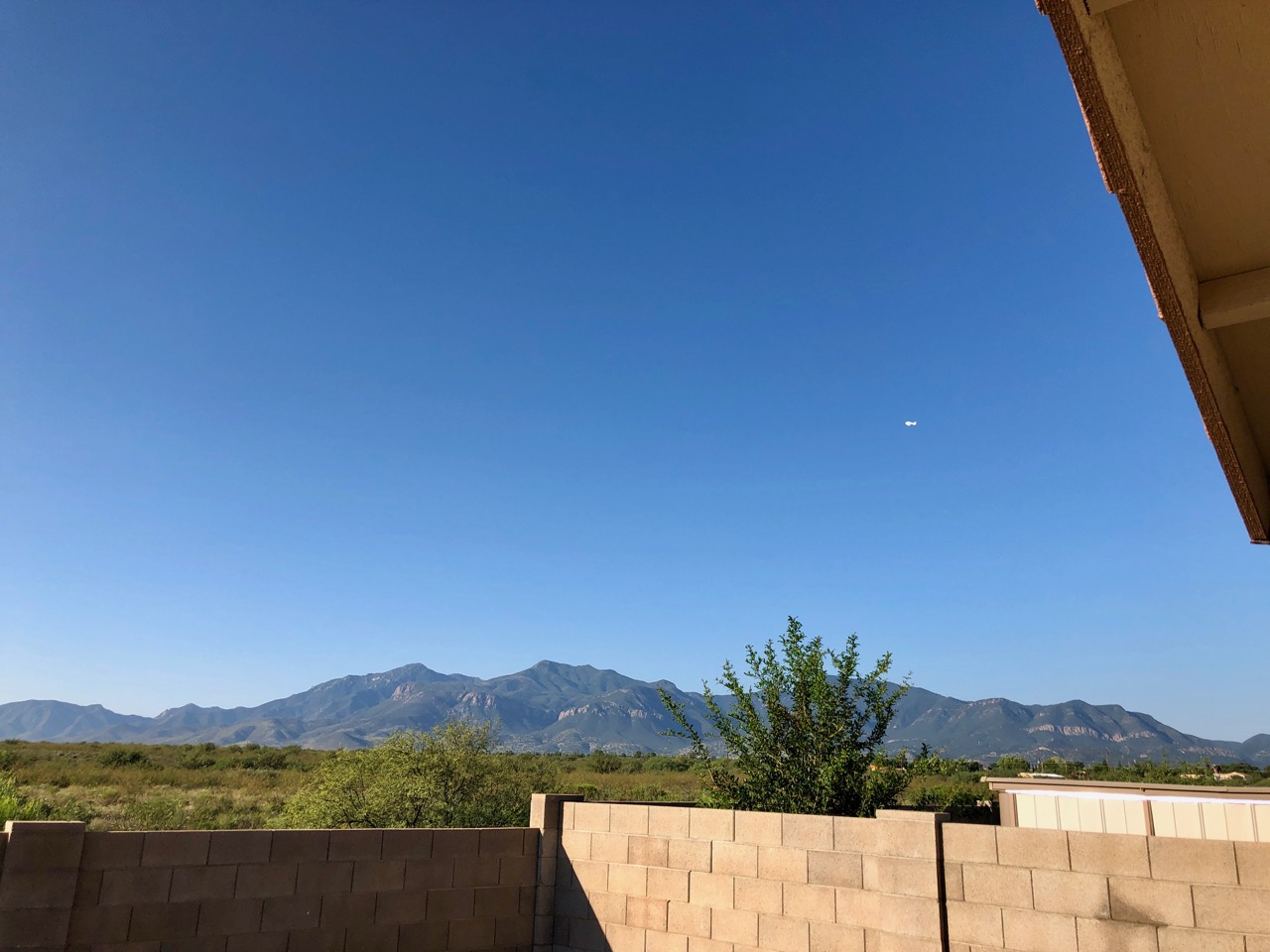 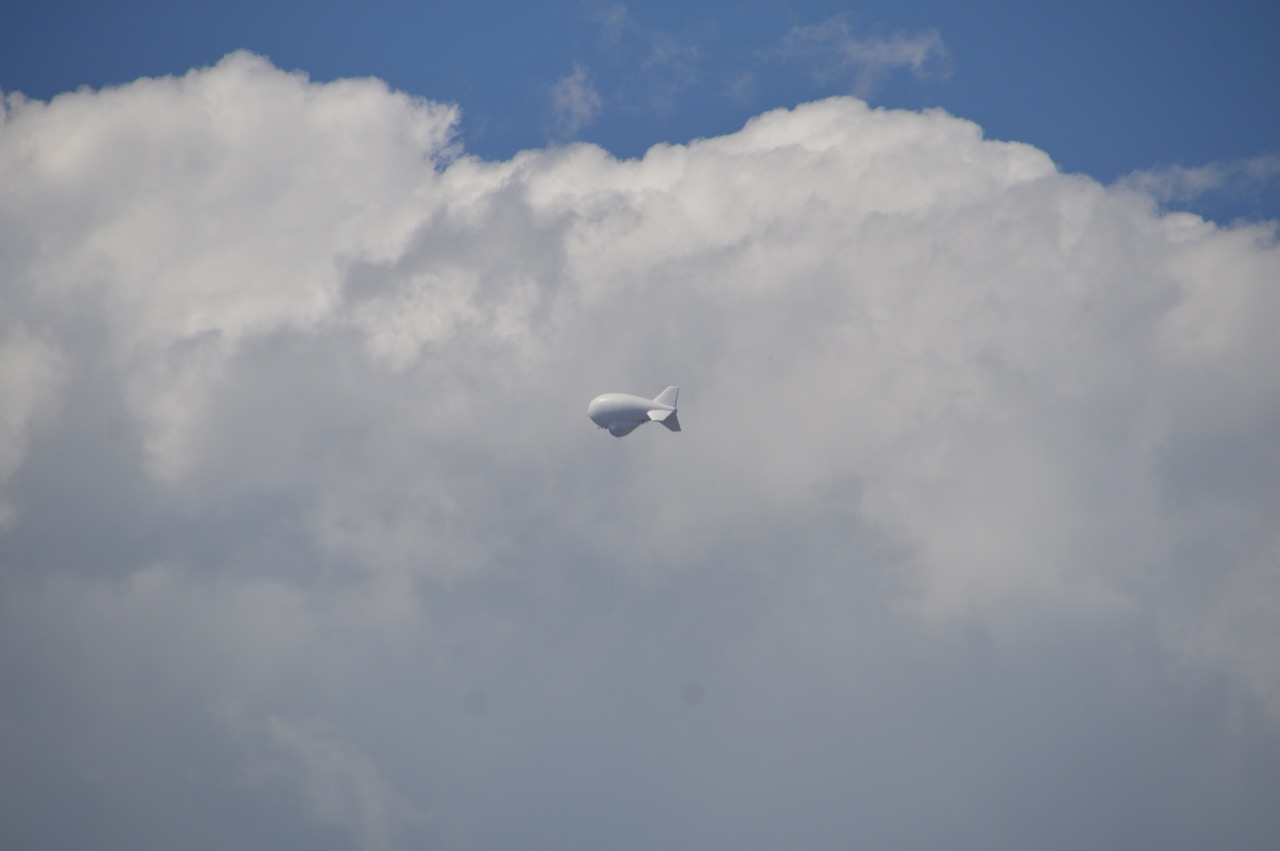 Clear skies for the Aerostat. 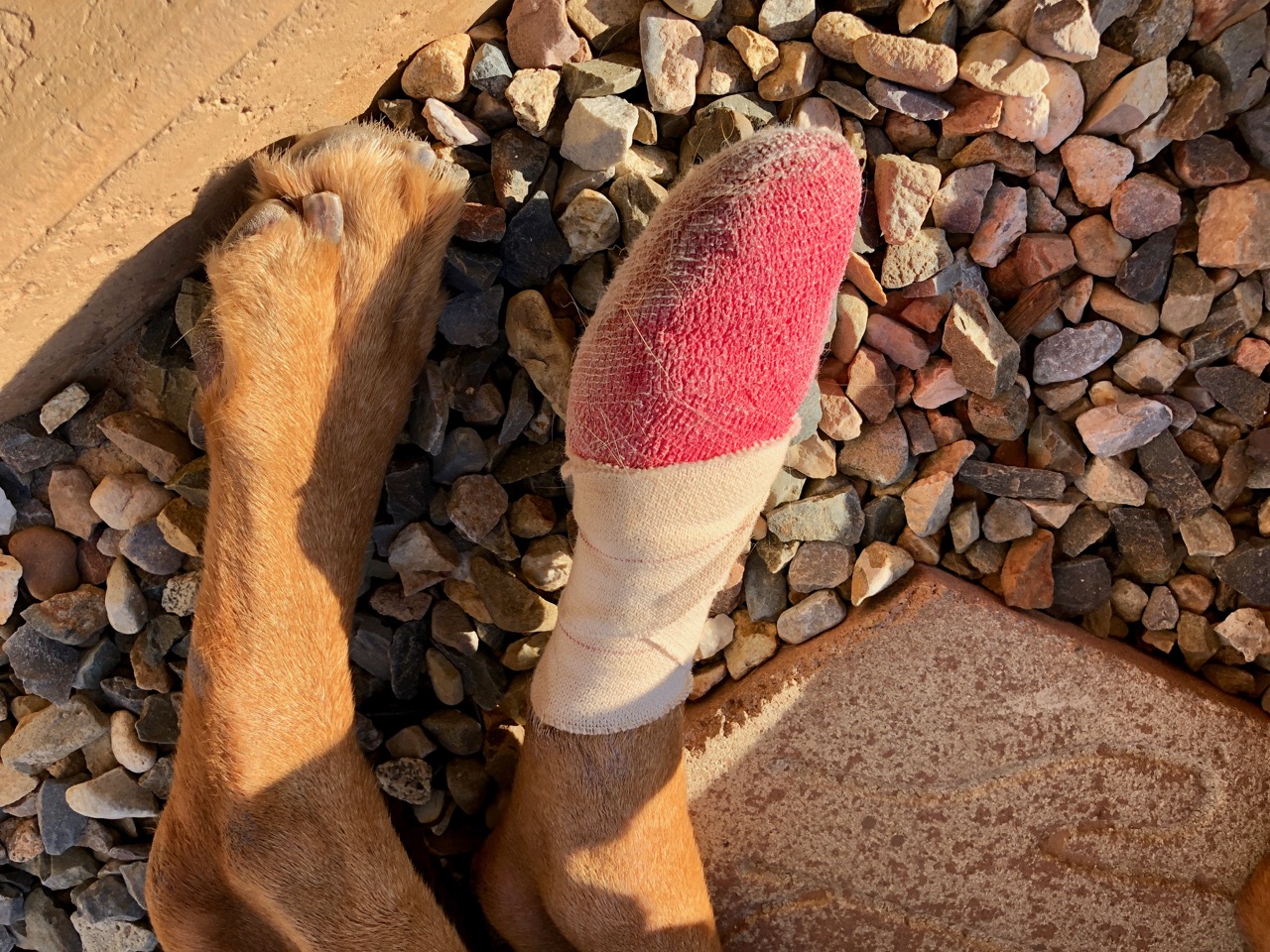 That pink thing might come off for good sometime Friday afternoon at 3:40pm. She and I are hoping it will and hear the words that we can resume our daily morning walks again by sunrise Saturday morning. 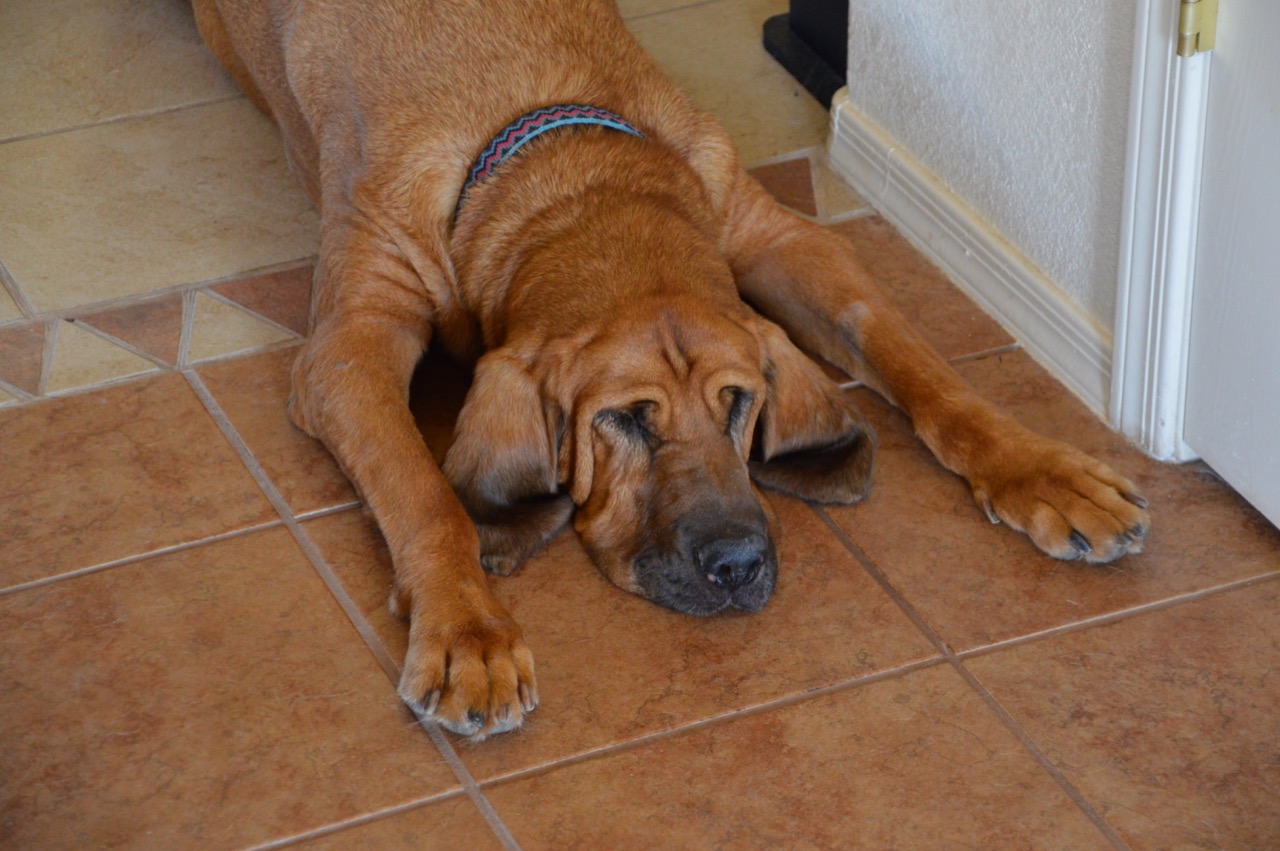 I had to spend all morning at home. I had a FedEx delivery that required a signature receipt so I wanted to stay until they showed up. They showed up a little before noon. The hounds had been fed and were sleeping when he arrived, they didn't hear a thing.

I needed to make a trip to town to buy more fresh caught Pacific Salmon and a little more of that Halibut, as I try not to look at the price per pound for that stuff. It tastes great. Riding 4-5 days per week now I need another pair of riding shorts so I stopped by the M&M Cycling Shop. They had a new shipment of Pearl iZumi shorts in stock and in my size. I also picked up a shop t-shirt since I never have enough t-shirts and a pair of cycling gloves since the ones I have been wearing are about wore out. 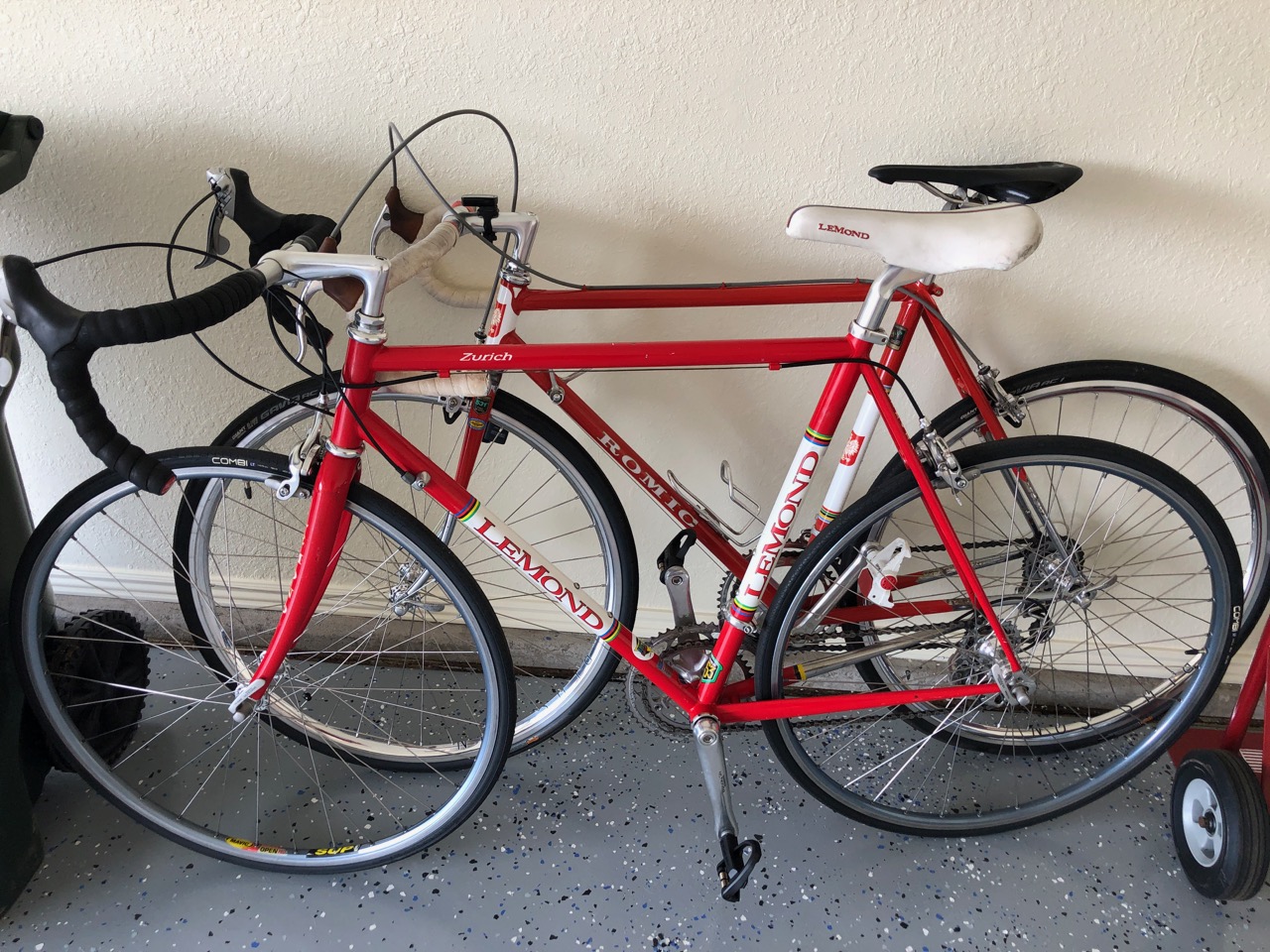 That was all I was looking for so I headed to the cashier counter. Leaned up against the counter was a red LeMond bike that I thought was just a display. I always wanted a LeMond bicycle but didn't want to spend the money they wanted to have one. As I was looking the bike over and admiring the craftsmanship built into the frame ... I see a tag "For Sale". Really ???

I asked Mike what size the bike was. My custom made Romic is a 56cm and yes the builder actually took measurements of the length of my leg, the distance between my thumb and finger to the middle of my shoulder and the distance from the outside of my knee to the the outside of my ankle. He asked if I rode hills or mountains sitting down or standing up and pedaling. That was in 1984 when those measurements took place.

The LeMond is 57cm ... you may be thinking how much difference can 1cm make? Well in bicycling it can mean a lot depending on the angles of those frame tubes. For example in 1982 I was having severe lower back and sciatica nerve problems thinking I was on the way to back surgery ... when I found out the top tube of the bike I was riding at the time was too long. Years later when one of my cleats on my shoes that lock into the pedals, was only a couple of degrees off ... it caused me to have so much pain in my knee that I could not ride.

So ... 1cm more ... I needed to test ride it ... they let me take it around the parking lot and that was enough area to figure out if this bike and me could find some enjoyment riding. The test ride was great, the bike was very responsive based on how the frame was made. It had new wheels, new freewheel, tuned up, and it was a consignment sale.

Now years ago when I was looking at LeMond bikes they were $2,500 and up ... now days this kids are racing on bikes that are $4,000 and up. I was in luck today though .. $500. They had just sat the bike out a few hours before I got there. I knew just by the condition of the 'used' bike it would be sold fast.

Just like t-shirts ... as long as I am riding on a regular basis ... you can never have enough bikes. Although for most of my life I have gotten by with having only ONE.  :)

I came home, changed into bike gear and took off to see what it would do. After 17 miles we decided both of us had had enough fun and finished the ride. Our top speed was 27 mph and that was NOT because I was going downhill. This bike could fly as long as I could pedal. LOL 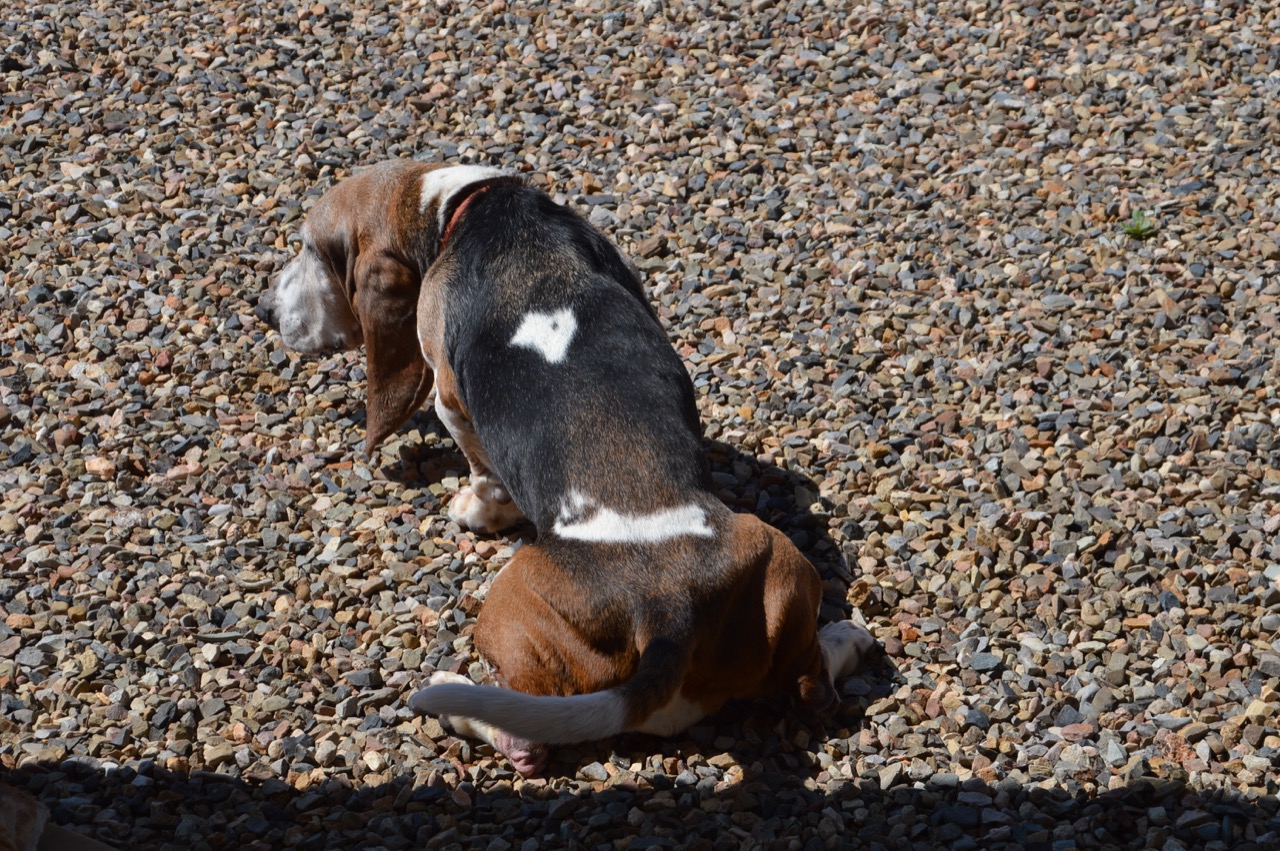 Better mood today from the start even with the lack of sleep. I believe Heidi has decided I need to train her like a puppy since we didn't get that experience when she was a puppy. When I got her from GABR, they thought she was a year and half years old, maybe two years at the most. So yes, while she is outside in the middle of the night squatting in the rock yard ... I am standing on the patio looking at all the stars ... there must be a million of them at that time of night with clear skies. 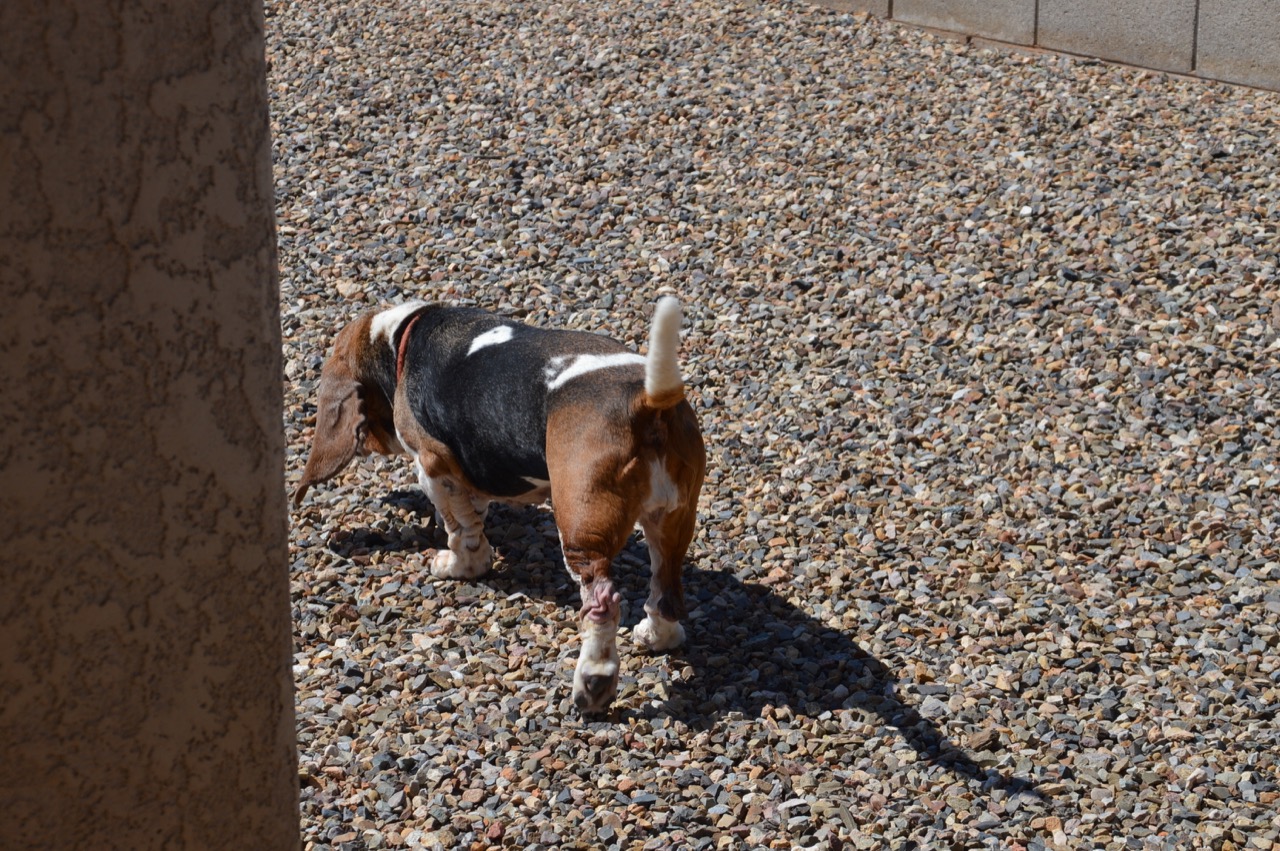 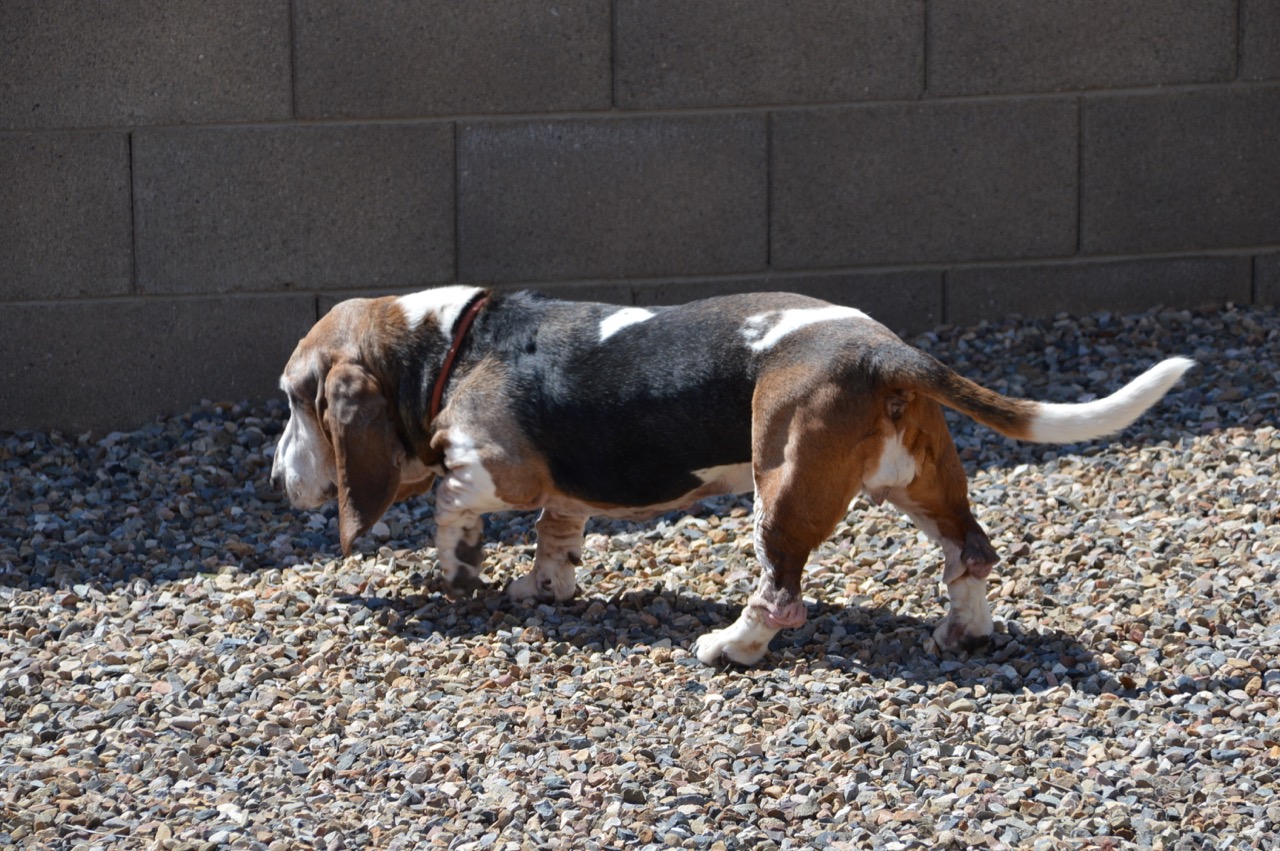 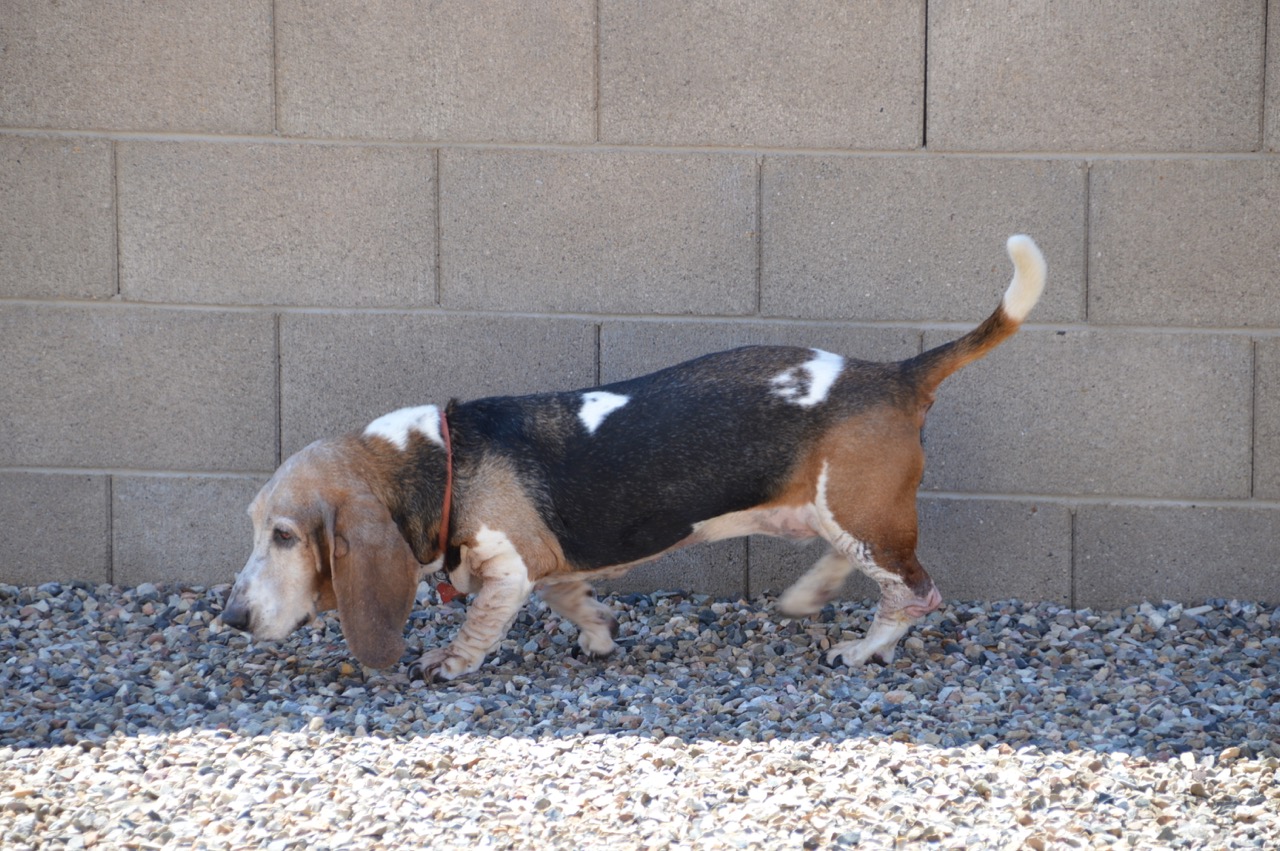 I need to go ... I hear the first NFL game is on tv for the past 2 hours 25 minutes while I have been guzzling ice water, writing blogs plus answering a few texts. Only a few of us still email anymore.

Don't worry about Heidi ... she is back to her old self of running sprints in the house, rolling on the living room rug while she growls at herself and knows every day at 4pm or soon after that it is time for her and Stella's afternoon dog treat. She never misses and always comes to get me if I forget.

She is due for annual shots this month so while we are at the vet, I'll have them check out that bladder problem she seems to have ... unless she is getting some sort of sick enjoyment waking me up every hour on the hour, every night this past week ... she might.