Hounds Have A Spa Day 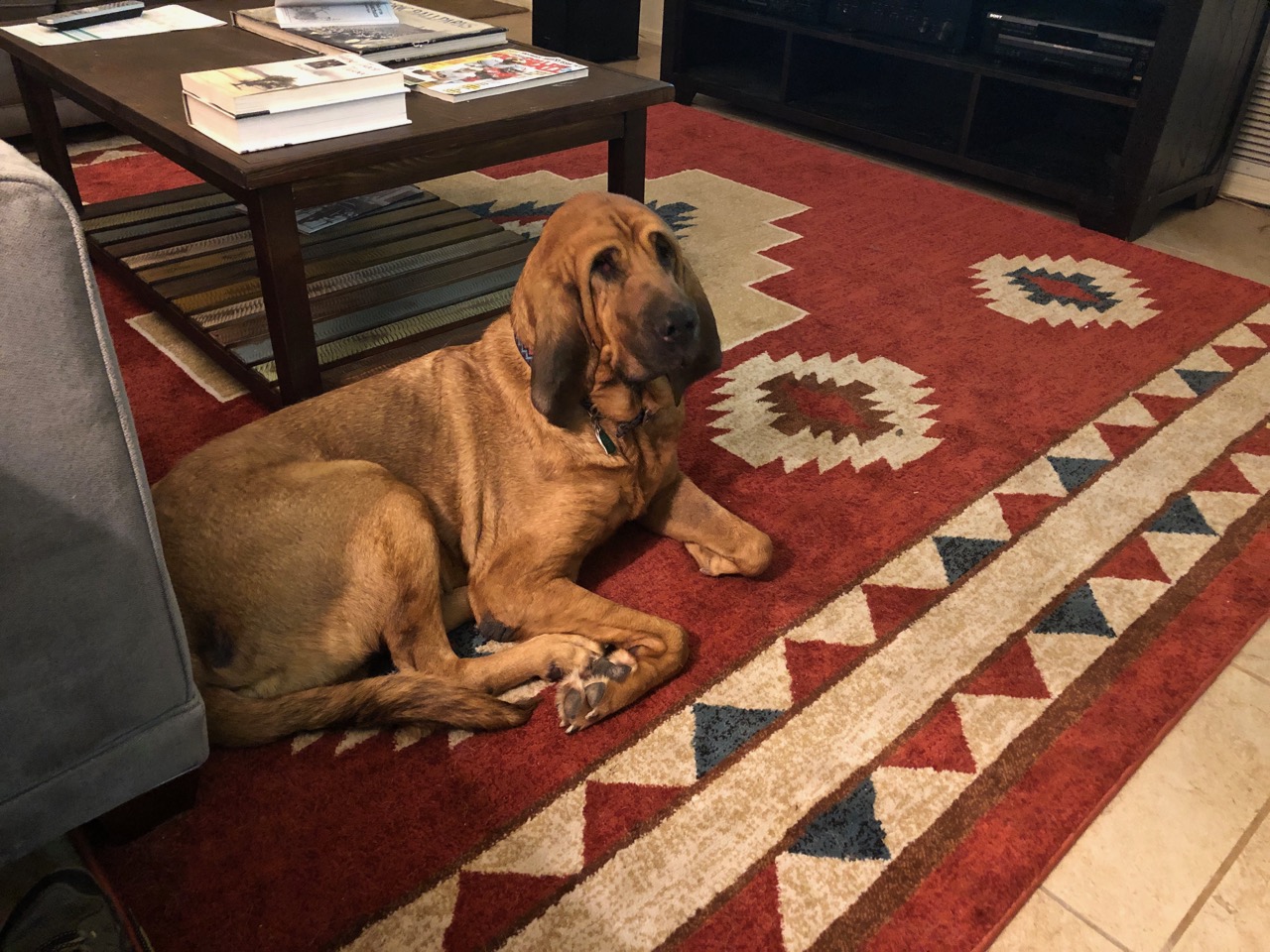 Stella was all set for another night of 'on call nurse' but within minutes decided that I was okay and decided to sleep instead. I am going to stop giving every day updates about my rehab since the first two weeks are over and it's another 4 weeks before my next appointment. There is not going to be a lot of different news until then. Yet, for the first time in a long time I had 6.5 hours of solid sleep last night, all because I could sleep on my side instead of my back. The hounds slept through the night until 1:43am .... 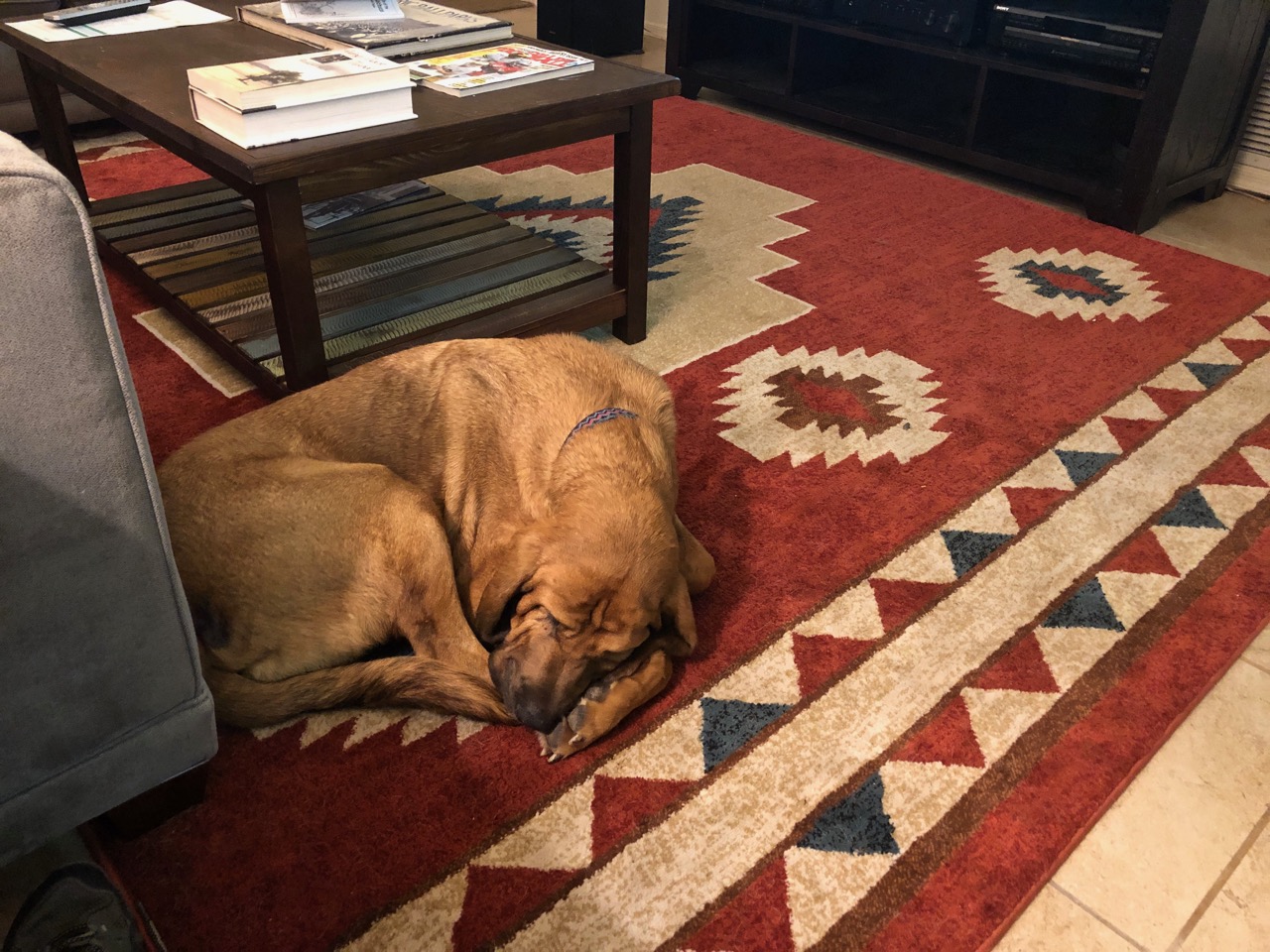 How do I know the exact time? The clap of thunder was so close and loud when I woke up from the sound I swear I was 3 feet in the air (joke). I had no doubt that lightning had struck the house or somewhere extremely close. Within that minute I hear what I think is a bloodhound trotting down the hallway on the tile floor toward the bedroom. It was Stella, who was sleeping in the computer room when I went to bed. Once she saw things were okay she laid beside Heidi's bed and slept the rest of the morning. 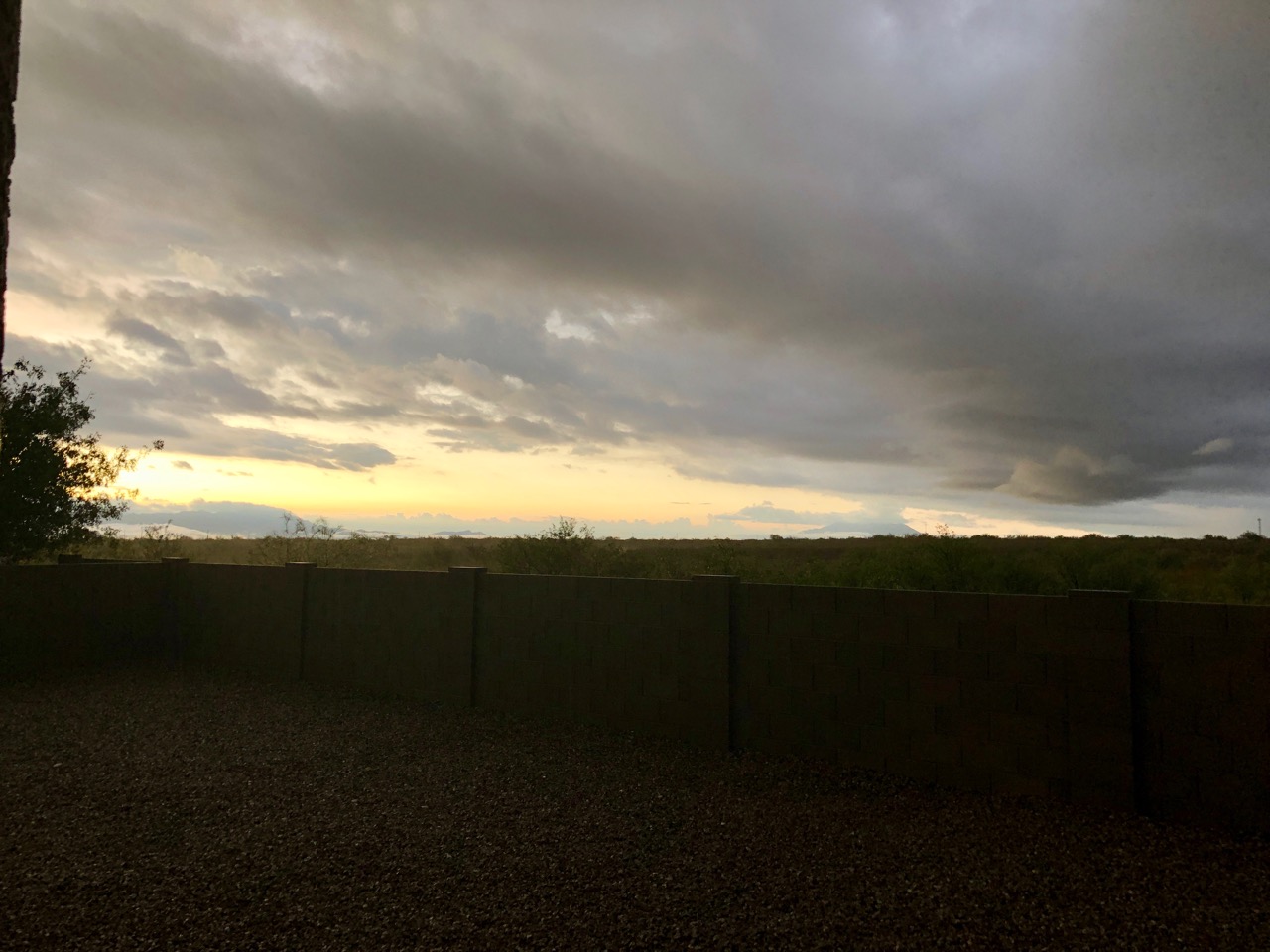 A little after 6am the winds were whipping from the SE and it was a cold 52°. I was wide awake at 4am while the hounds slept until 7am. It was going to be a big day for us today. I was going to get a lot of walking done inside the house without the walker and the hounds were going to be picked up by Sierra Dog Grooming at 10am so they could have a spa day. 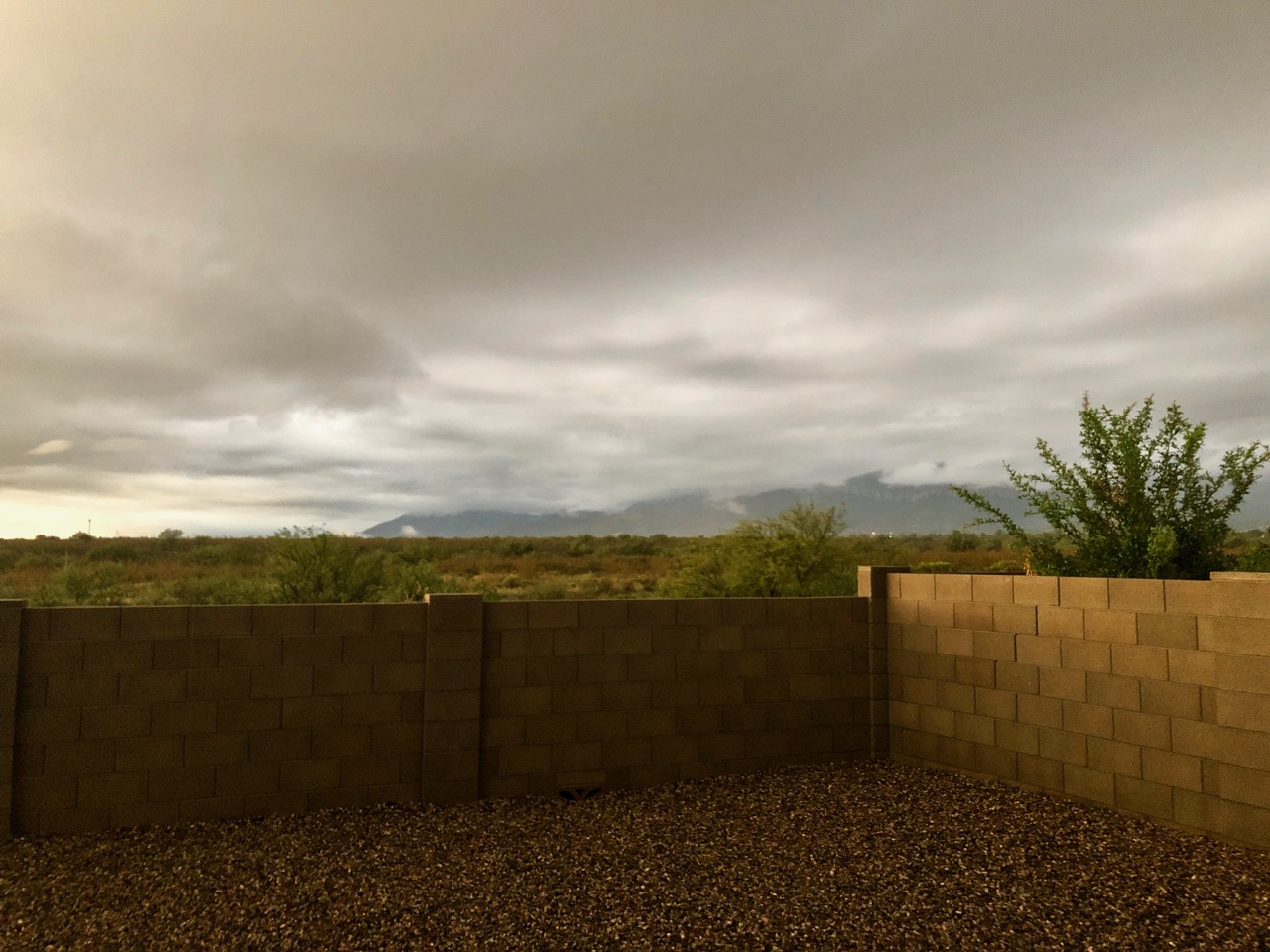 I planned on alternating between the walker and my trekking pole inside the house but once that my neighbor saw that he said "wait a second, I'll be right back" ... a few minutes later he handed me a metal adjustable cane to use. With the curved handle I found it much easier to walk compared to the flat top of the trekking pole. By noon I had over 5,000 steps, almost twice as much as my biggest day.

Remember the doctor told me to walk as much as I wanted as long as I did not feel fatigue in my right leg or hip. 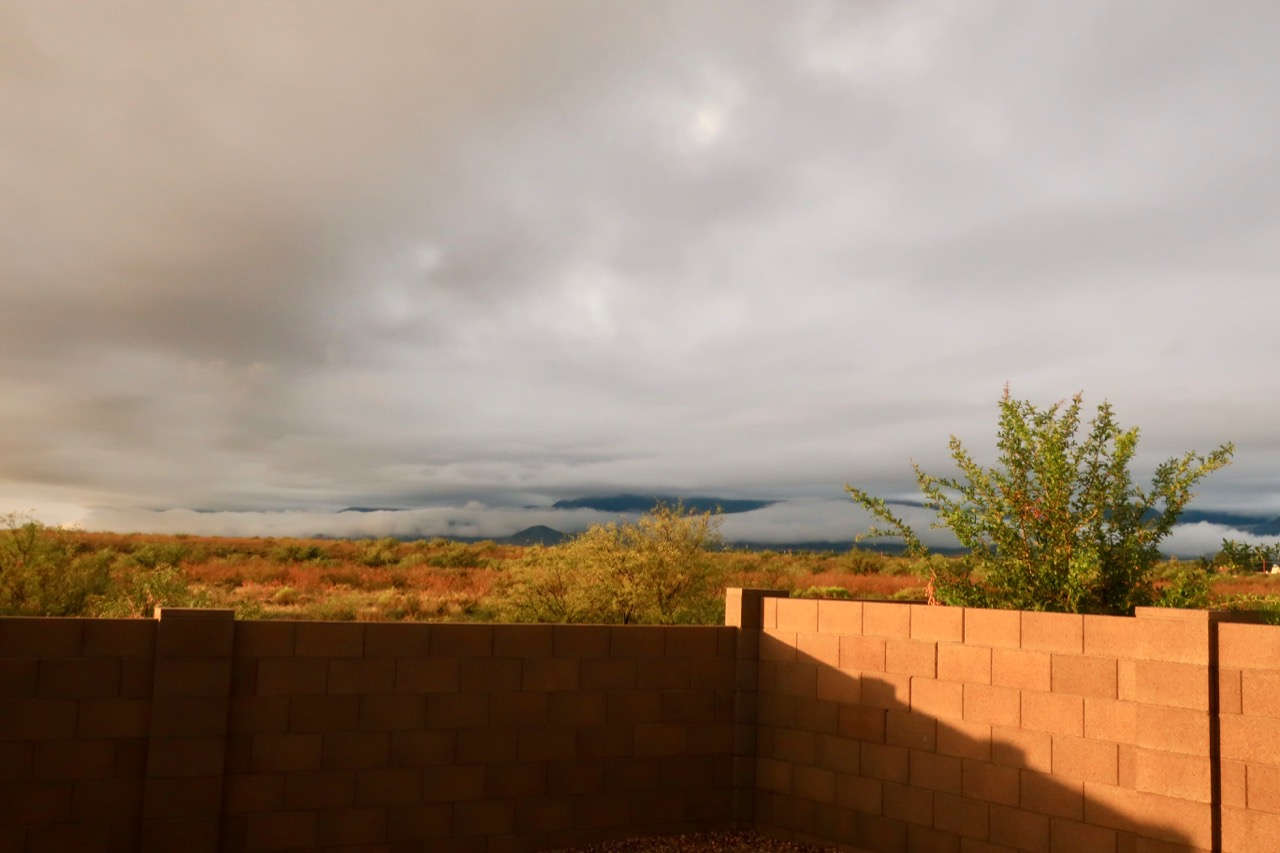 Kelly arrived right on time with a Jeep Grand Cherokee. I told her all about Stella and Heidi and like everyone else that has met the hounds, she loved them. Once she put my leashes on each hound Heidi started walking to the car while Stella wasn't so sure. Was she being given away again? 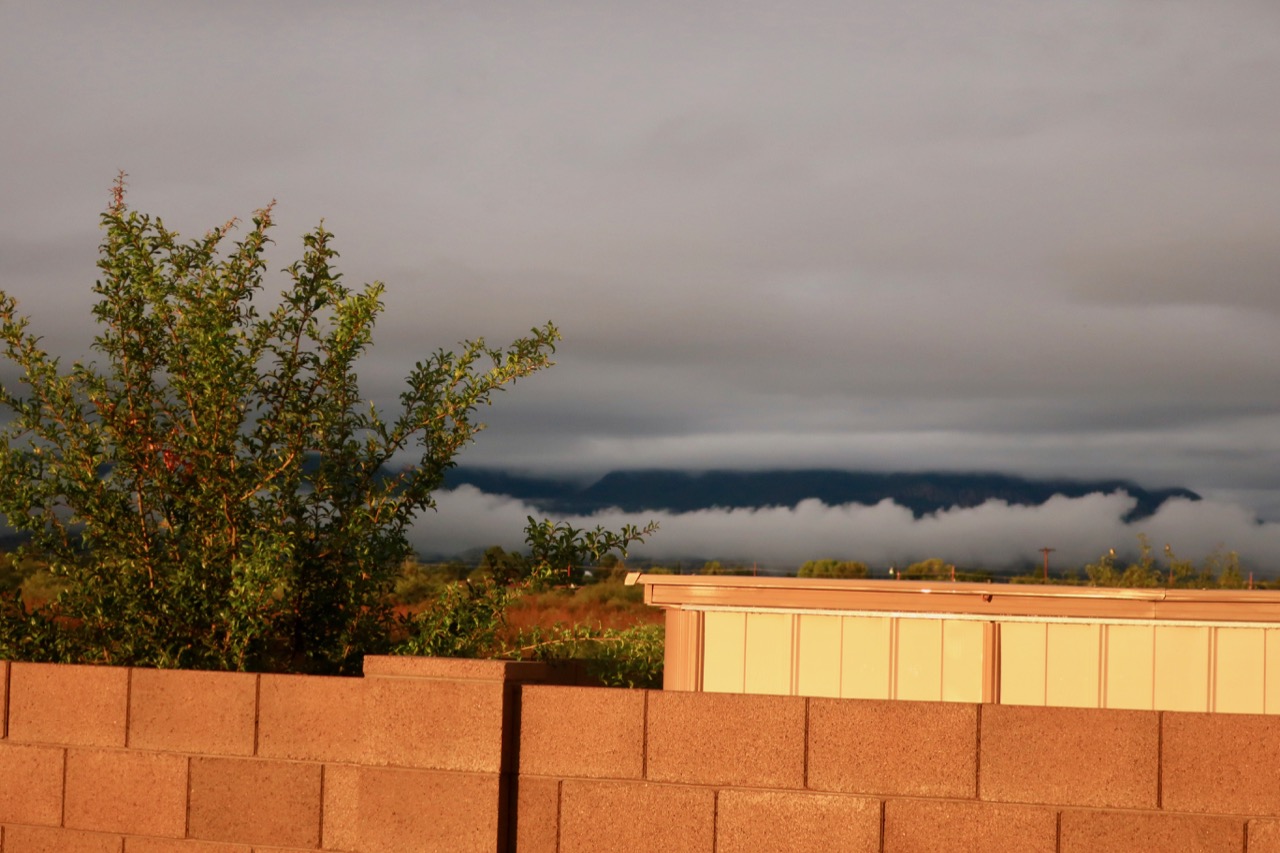 Heidi jumped up in the back seat like it was her car and with Stella's hips Kelly was able to lift her just enough to get her in the back floorboard where Stella stepped up on the backseat. Each hound was then buckled into their doggie seatbelts. I was going to be houndless for about 5.5 hours, for the first time since September 2018.

Right after they left I had my groceries delivered by Fry's Market and once again they pulled 34 items from my online shopping list and didn't make a mistake. That service is well worth the $9.95 service fee plus a tip.

I called the doctor's office to confirm that I could take a real shower. I had forgot to ask him yesterday during my appointment but assumed I could since he said the incision had healed very good and he took the surgical tape off. I had no problems losing balance or feeling dizzy. It is a walk in shower not one in a tub. It felt great to feel really clean again. With everything I  had done in the morning it was time for some rest, and a possible siesta.

An hour later I was vacuuming the house and then I put every jacket I brought with me in the washer to prepare for our winter. I can pull the jackets or any kind of laundry out of the dryer with the grabber.

So by the end of the day I was going to have a clean house, a clean me and two clean hounds !!! 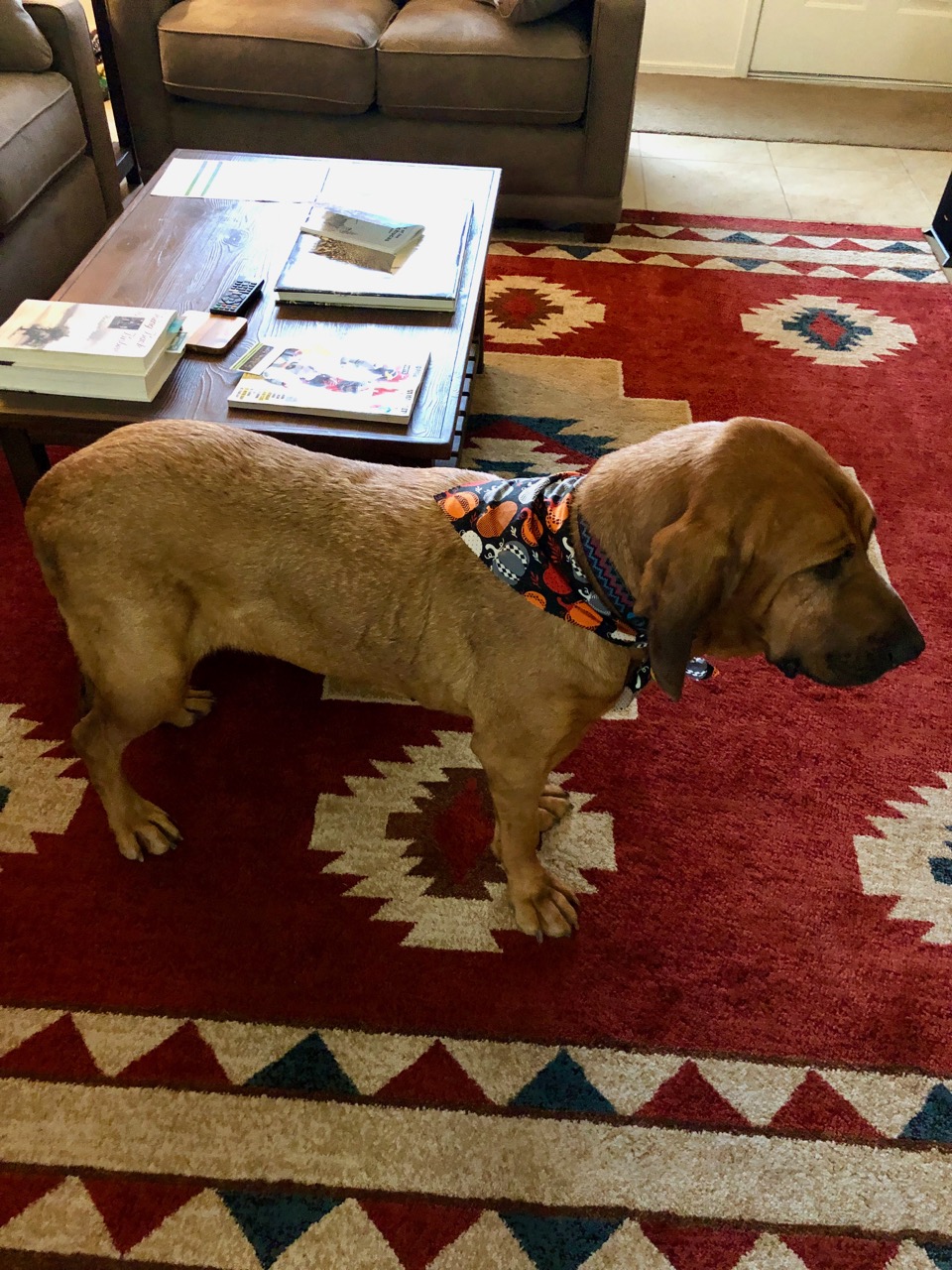 Around 3:45pm the Jeep Grand Cherokee pulled up in front of the house. Luckily it wasn't raining so I grabbed my cane and headed outside to grab Heidi's leash while Kelly got Stella out of the backseat. Within a few minutes Heidi knew where she was and trotted away as I let go of her leash ... right into the living room.

Once Kelly was at the side walk I told her to let go of the leash and Stella would run to the house, which she did. Both hounds were soft and shining with an added Halloween scarf around their necks. Heidi's nails looked shorter than I had ever seen them. Stella's were still short from her vet visit a few weeks ago. 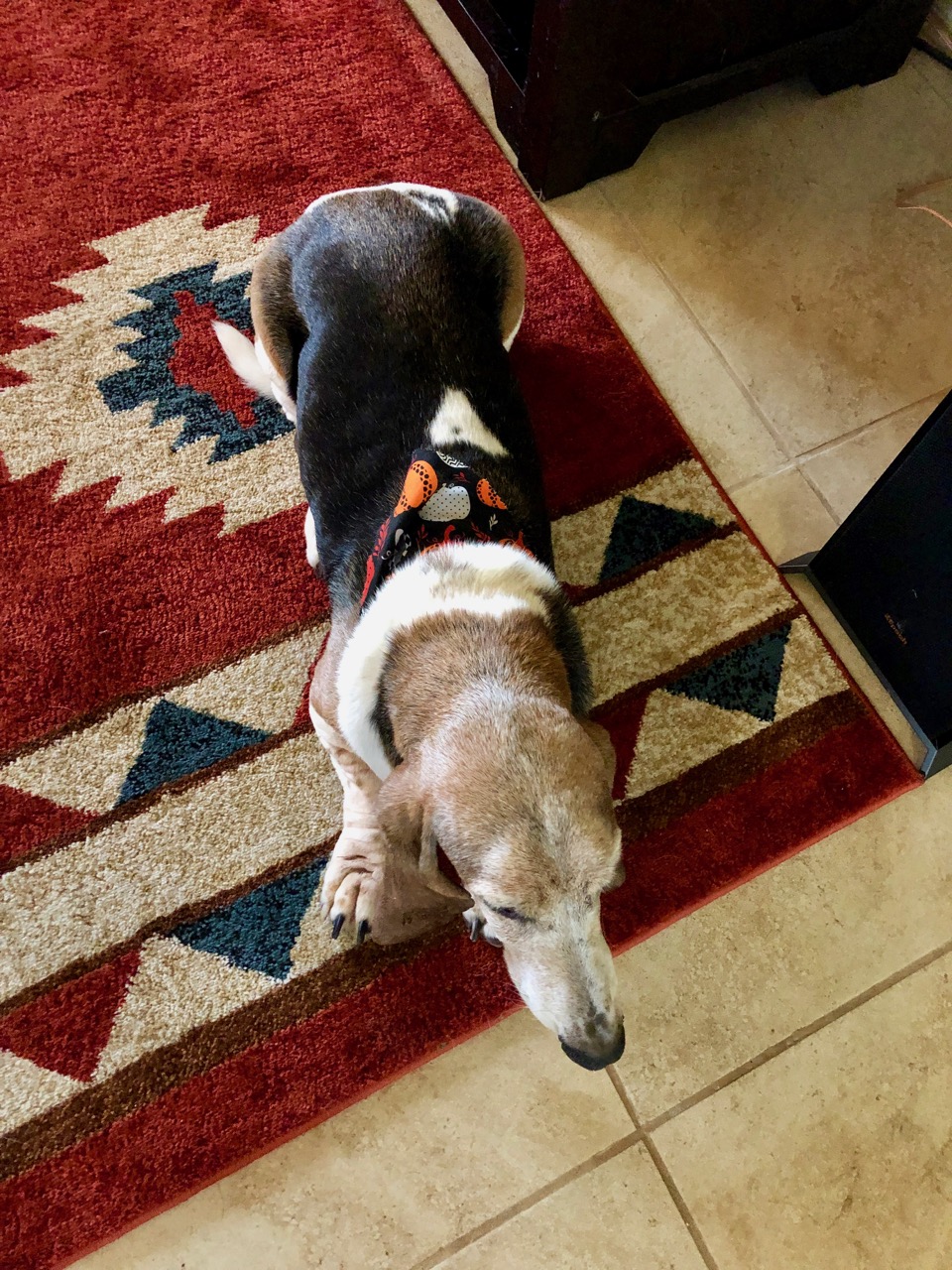 Kelly took her time and explained everything she did for Heidi and Stella. She thinks that Heidi might be starting to have an ear infection. Both hounds were happy to be home, wagging their tails and checking to see if I had any treats for them. I asked how they were in the kennel and she said the both of them were the best dogs they had ever worked with. They stayed in the same kennel after they were cleaned. 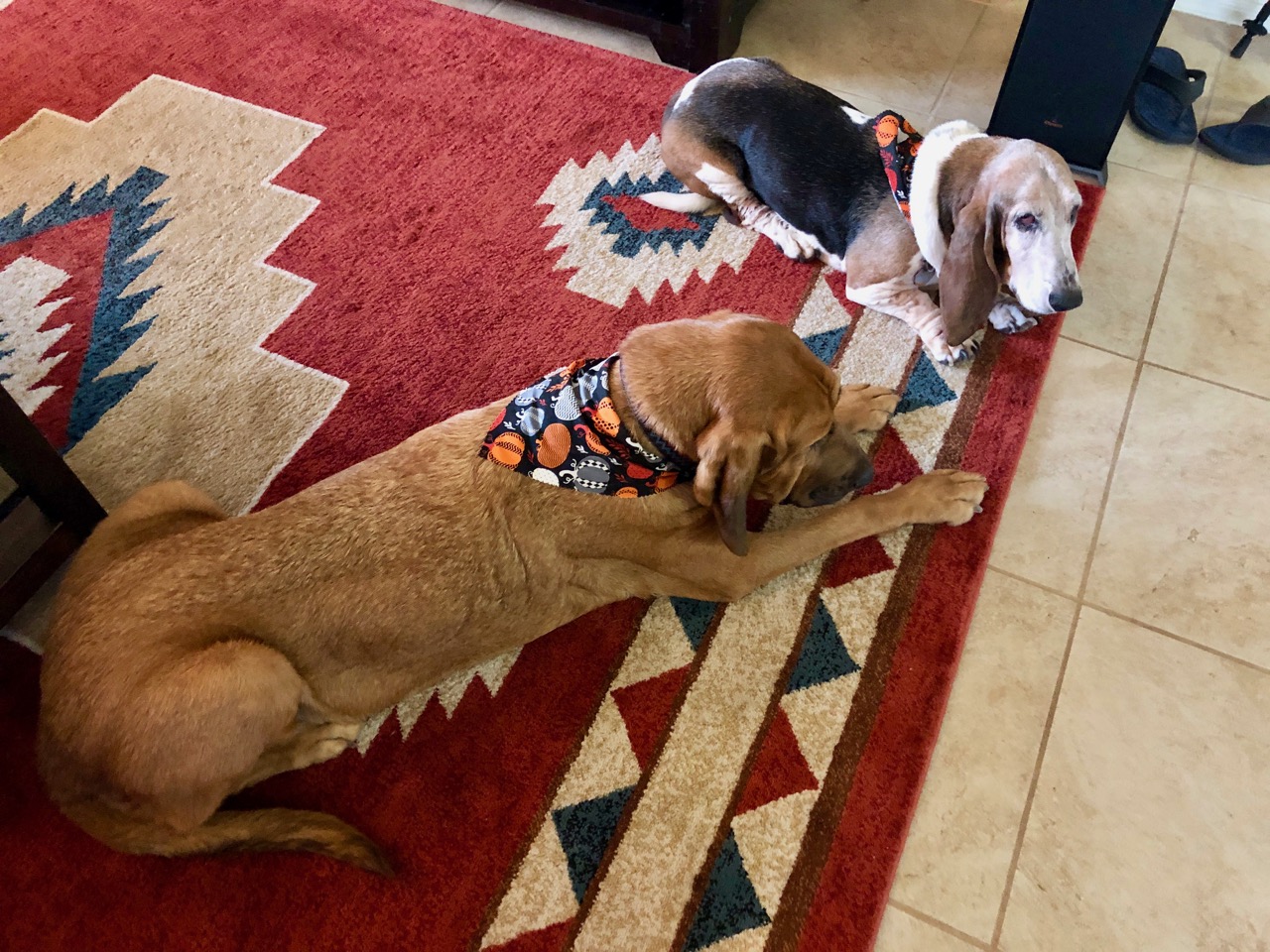 Both liked getting a bath and both didn't mind getting their nails cut. She said that Stella loved having her ears cleaned and Heidi didn't mind it either.

I will definitely be using their service again, only next time I should be able to drive them to their facility myself. They say don't bath a hound as often as other dogs because it takes the natural oil away but I usually try to bath them when they start smelling like a hound.

There was some other surprising news this morning, adding another thing I can do.

My hound sitter/feeder MJ The Pet Nanny sent me a text this morning that she was going to be late due to an emergency with a client that has five cats. After that she had to take time to feed horses of two clients. Like she told me last week, horses are different than dogs when they are hungry ... they don't whine or bark, they kick down gates and fences so she had to feed them before she stopped by to feel Heidi and Stella.

It was getting pretty late, past Stella's breakfast time so I looked at the situation and grabbed an empty dog dish with "the grabber" ... no problem sitting it on the floor and picking it up to clean after their meal. Would I be able to bend over to dip the kibble out of the container into their dishes without breaking the doctor's 90° rule?

To make sure I leaned over on my good left leg while keeping the bad right legs off the ground  ... no problem. While the hounds were eating I had the neighbor watch me and confirm I was not breaking the 90° rule when bending over to get the kibble out of the storage container.

I had to try another thing. I grabbed the poop bag and headed outside. I like picking it up as soon as possible and knew I'd be doing this once I moved to Arizona. Stella would  no longer have that 7 acre field she like to crap in.

So once again I leaned over with my bad foot/leg off the ground and was able to pick up what I needed to without bending more than 90°. I was close to feeding the hounds again and cleaning up after them. Since I have been sitting things I need up waist level or higher around the house so I can reach them, I decided I needed to sit the kibble container on something a couple of feet tall so I would barely have to bend over to get the kibble out.

I had the perfect solution. I have a hard fiberglass case that I stored camping stuff in that was just he right height. I had my neighbor bring that in from the garage and it worked out perfect. MJ was giving me a discounted price for coming twice per day since I was here and could let the hounds out during the day and later at night. She loves Heidi and Stella too but she has a lot of animals to take care of besides all of the ones she owns.  I will also call her when I need her in the future to take care of Heidi and Stella.

So the hounds are shiny, clean and sleeping. I am clean and can do the majority of my walking with a cane and sometimes with only my two feet. Once again I feel stronger than yesterday, still following the rules for making turns and using the walker as an alternative. It's been raining again so I expect another good night of sleep and we start all over tomorrow.

Comment or email me if you have any questions about hip replacement surgery or rehab.

It's a rough day spending all of it at the doggie spa .... 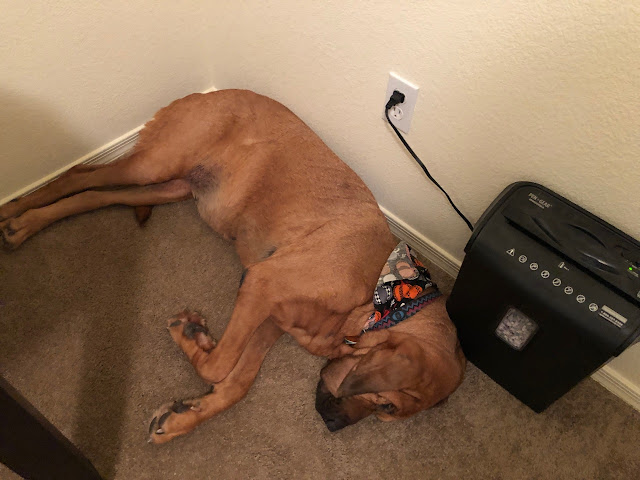 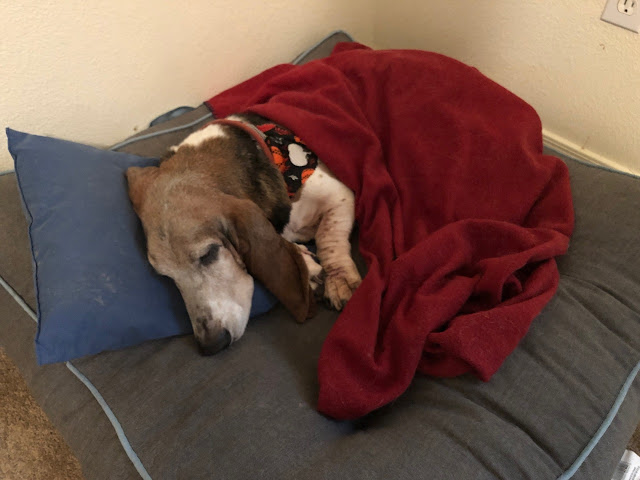