Another Day Closer To Normal 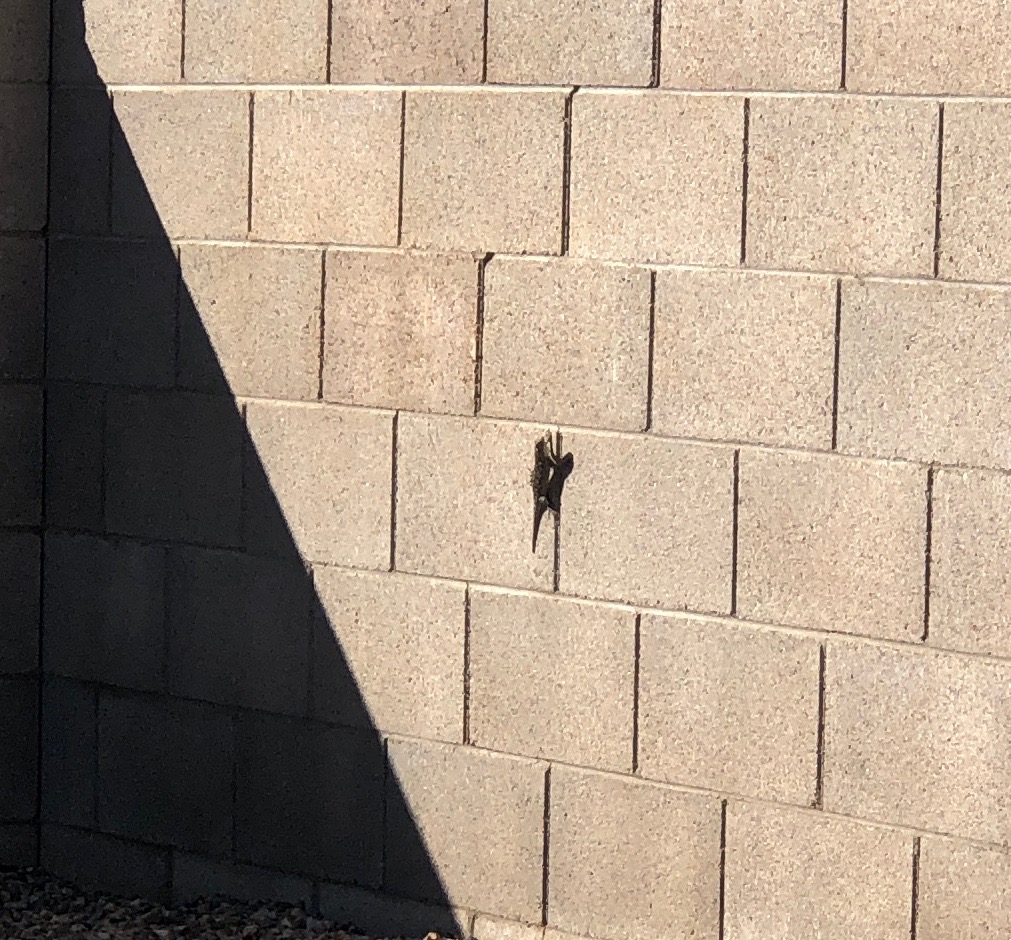 Just like the lizard, small steps take you a long way. Another day of feeling better, stronger and range of motion. I think today the only thing I feel is the incision area where it is itching on the outside but feels like something on the inside. I just noticed the swelling had really gone down since last night. I always apply ice on those areas when I sleep. Which I will get into later. 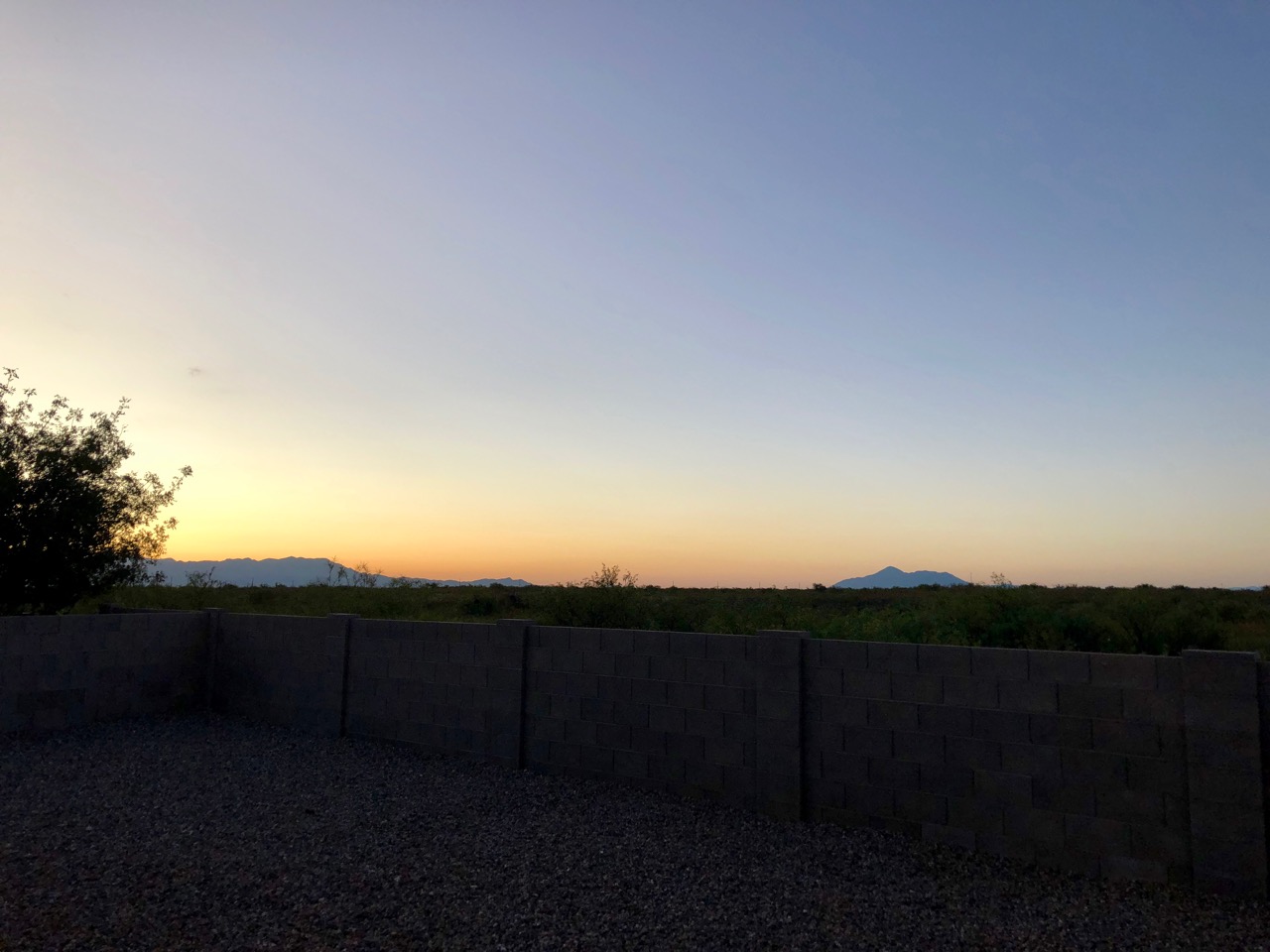 All three of us had a pretty solid night of sleep. Stella slept in the corner of the computer room until 4am. Heidi slept all night until 4am and I had some solid sleep in the range of 2 hours at a time. I felt a lot more rested when I woke up at 4am. That is when Stella nudged my hand where her nose letting me know she had to go outside. Heidi woke up and thought it would be a good idea to join here. I swear they still must be on Eastern Time. 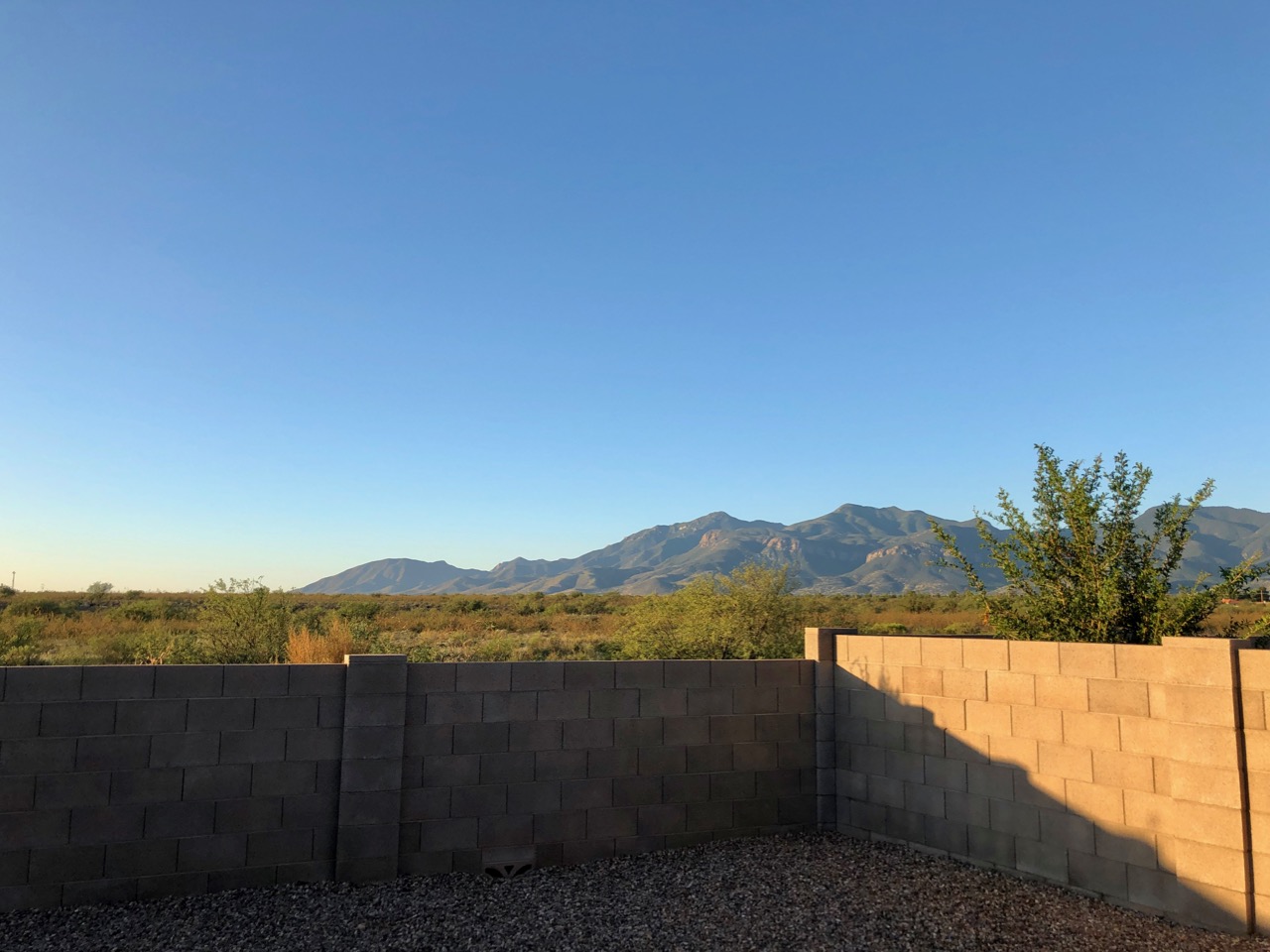 I felt like being outside yesterday afternoon so it was the perfect time to walk next door to return two cleaned food containers they had given me on Sunday night full of great tasting food. That meant I had to walk down and up two different driveways. Plus I was able to maneuver around the potted plants they had on their sidewalk. No pain, no signs of weakness nor dizziness.

This morning you could tell it was going to be another great day. The highs will be mid 80's and I might not even have to turn on the AC today if the breeze through the house continues.  I grabbed my iPhone to take photos and moved outside to sit on the patio for a while. Both Heidi and Stella joined me outside. 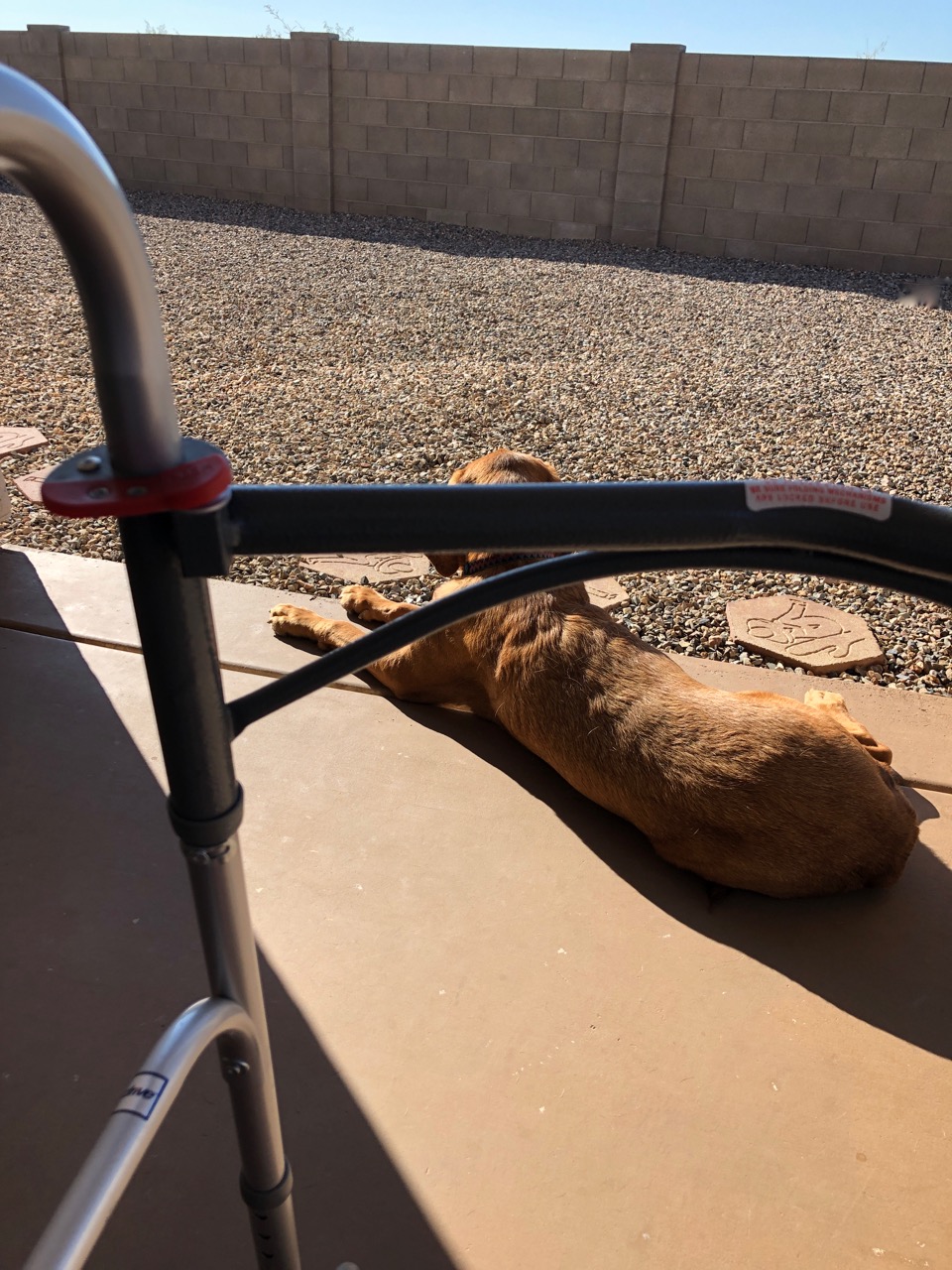 A friend suggested some supplements to take in powder form. An orthopedic surgeon had recommended the Collagen and I am trying to get a lot of protein to build up the injured area. While I was on the Amazon site I searched "Hip Replacement Rehab" and found a few things I can use. Like a 4" padded seat cushion, those kitchen chairs are hard as a rock and my butt is sore.

Since the two ice packs the hospital gave me leaked badly in the middle of the night on two successive nights, I bought two ice packs with great reviews by customers and an Amazon Choice. Being 10" long and 5" high they will be perfect to slide along my thigh at hip at night. That was the same shape the ones from the hospital gave me. Walking up to ice cold water everywhere is never fun. 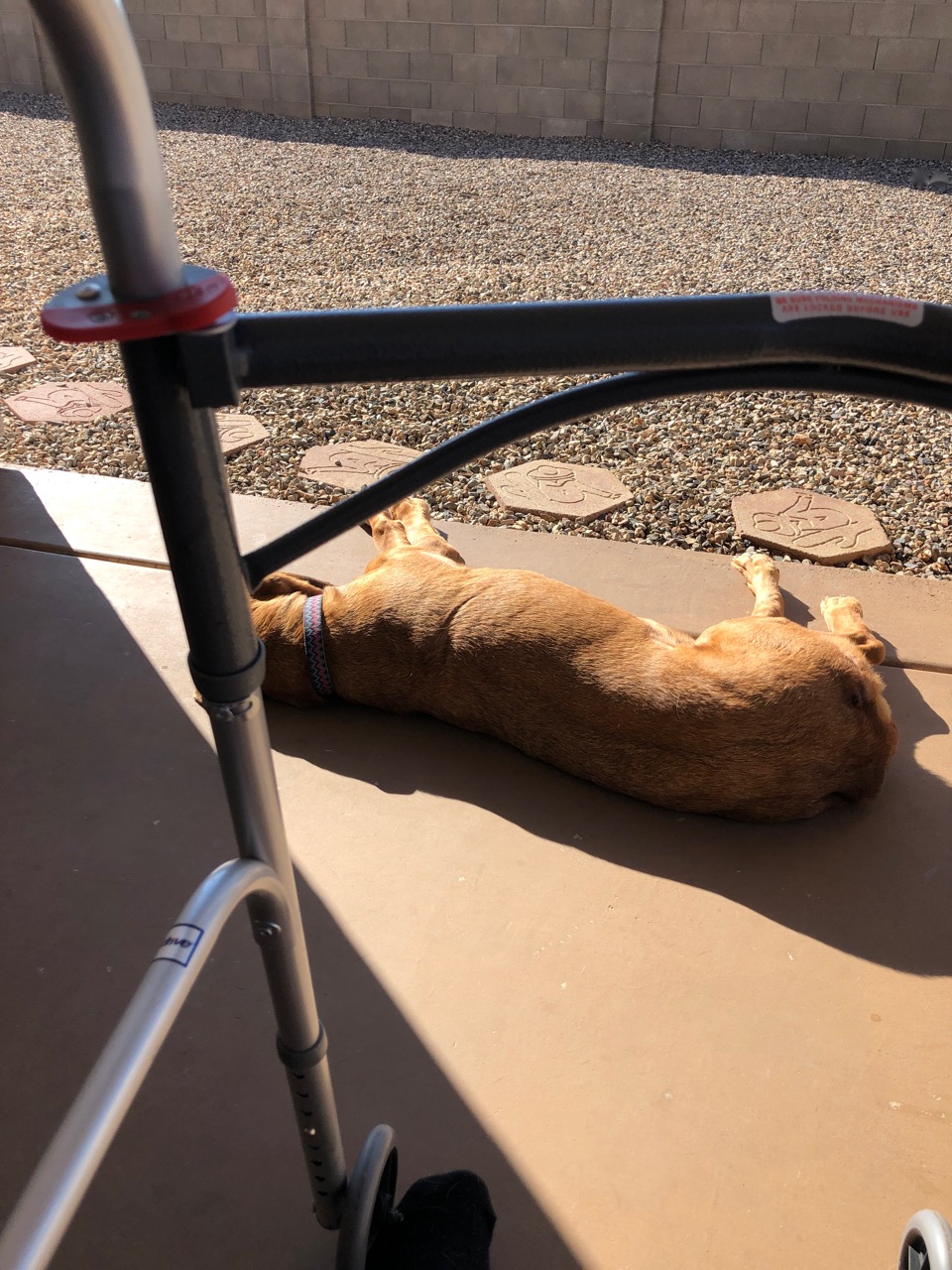 My morning smoothie was a cup of Silk Almond Milk, the packaged 8oz bag of Dole's frozen berries, a handful of fresh spinach, 1 whole banana. Add that to the vitamins I am taking and I think my diet is off to a good start for the day.

All exercises I did this morning were painless and there was more range of motion in a few of them, while only going as far as the first sign of discomfort. I can now sit in a chair on do leg lifts on the surgical size ... meaning ... I can lift my lower leg knee high and hold my right leg straight out without pain. 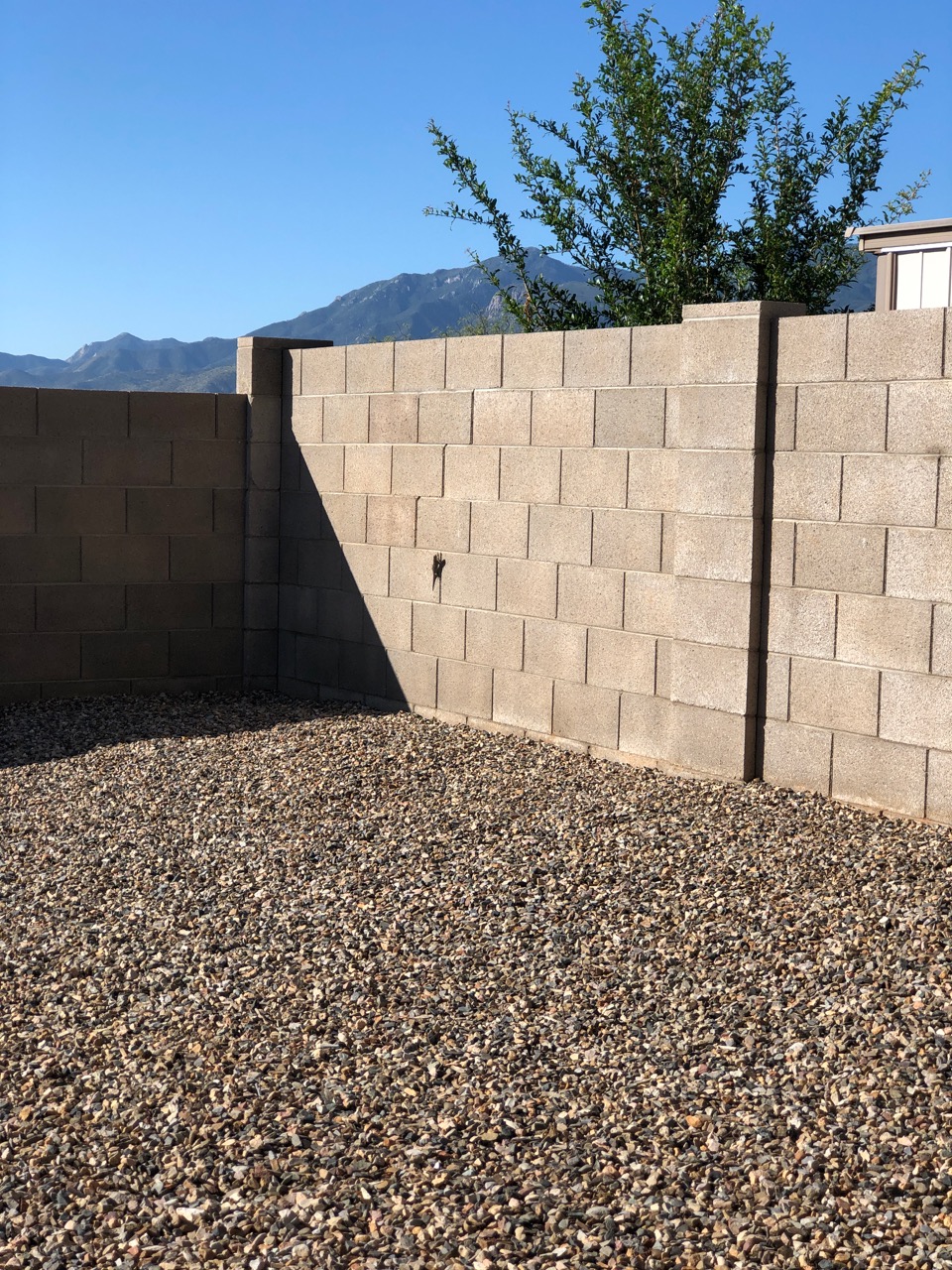 It did not take long to realize the faster both legs became stronger, my life was going to get a lot more easier. It would give me the ability to get out of bed easier because I could move the legs from right to left toward the edge of the bed. I have no doubt the trips I make in the middle of the night has helped in this healing process. 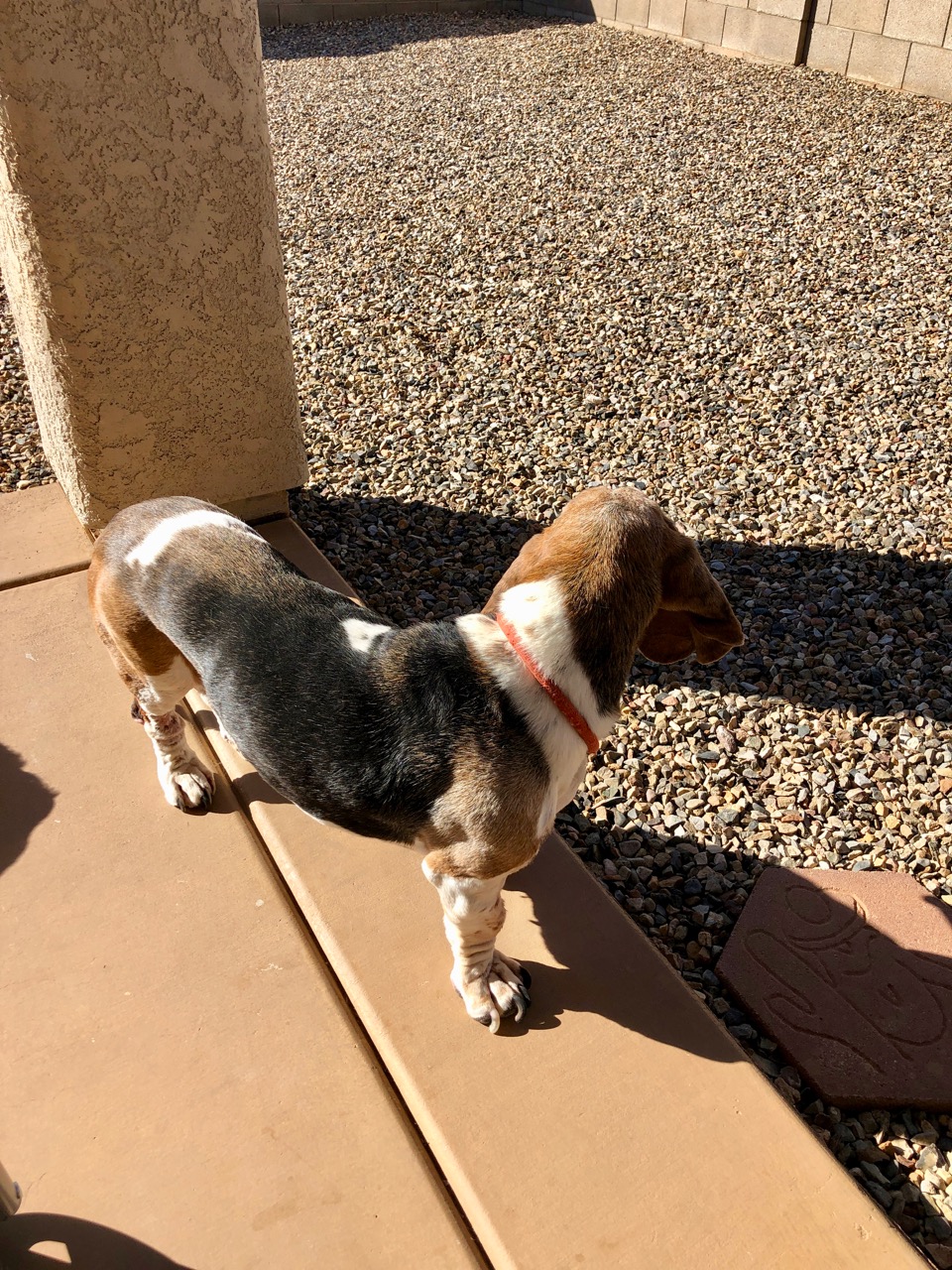 Heidi came out to join Stella and I and it did not take her long to see a lizard on top of the fence about to sunbath. 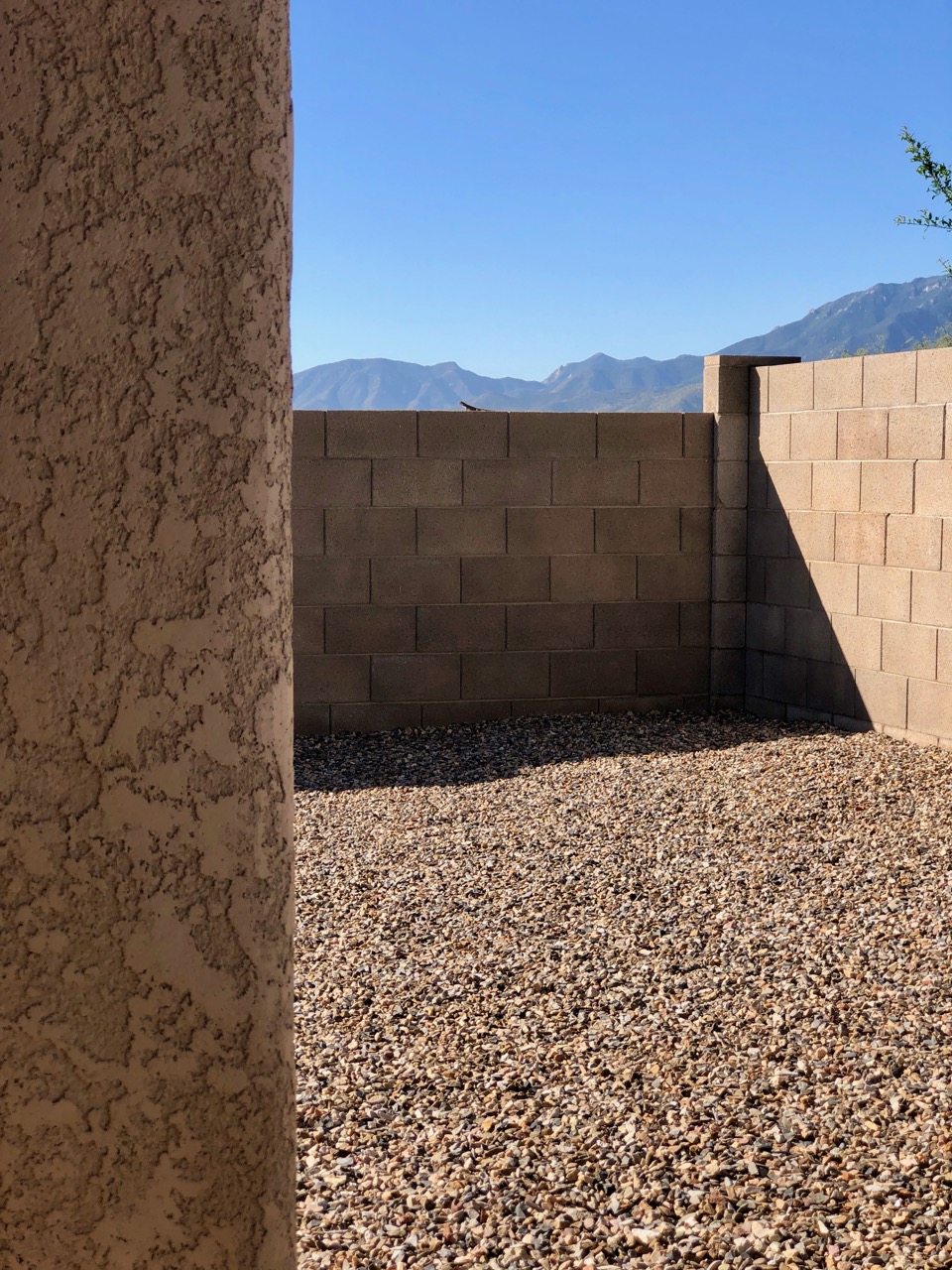 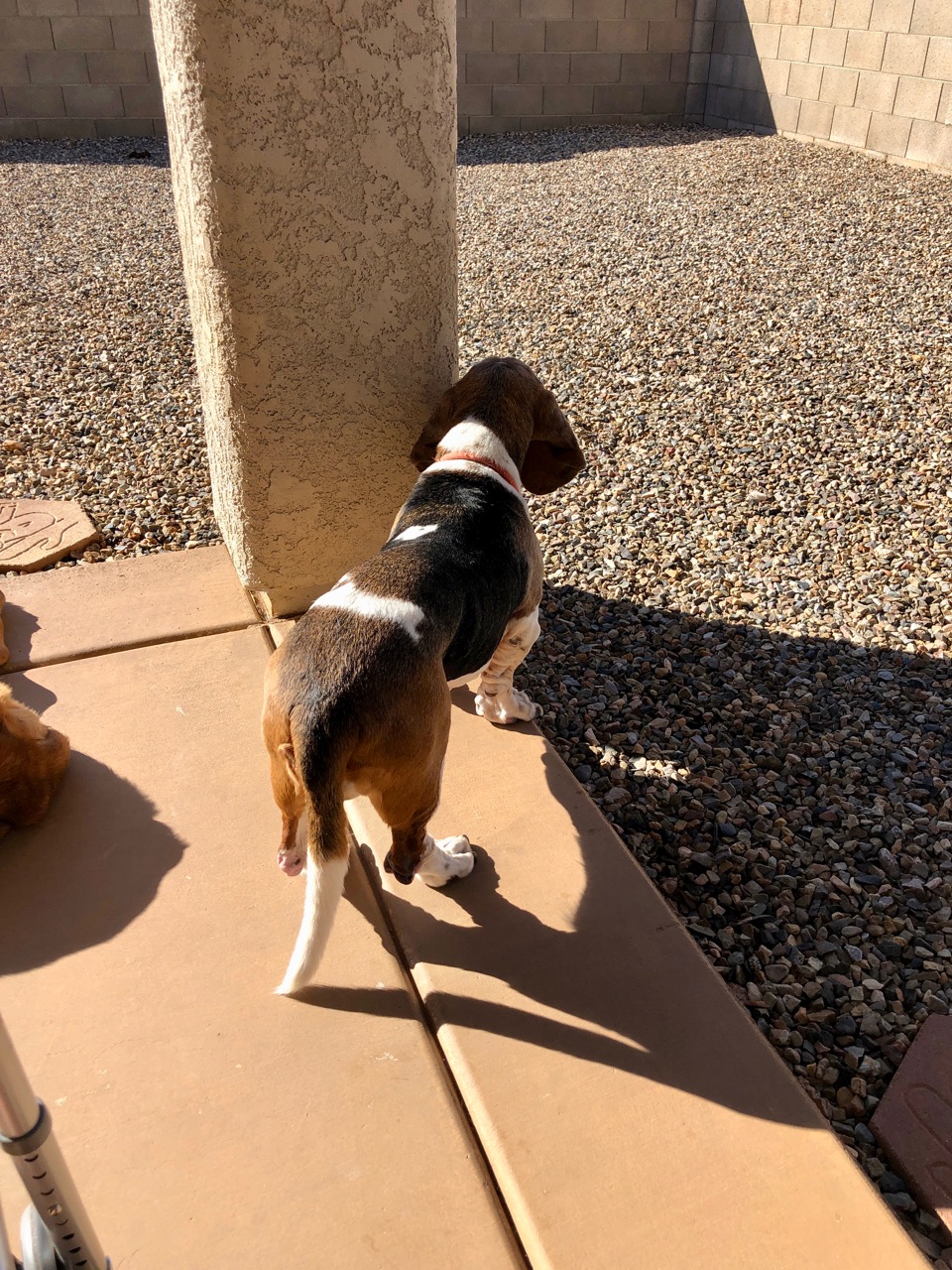 I am not sure what she would do with a lizard but she was keeping a keen basset hound eye on it. 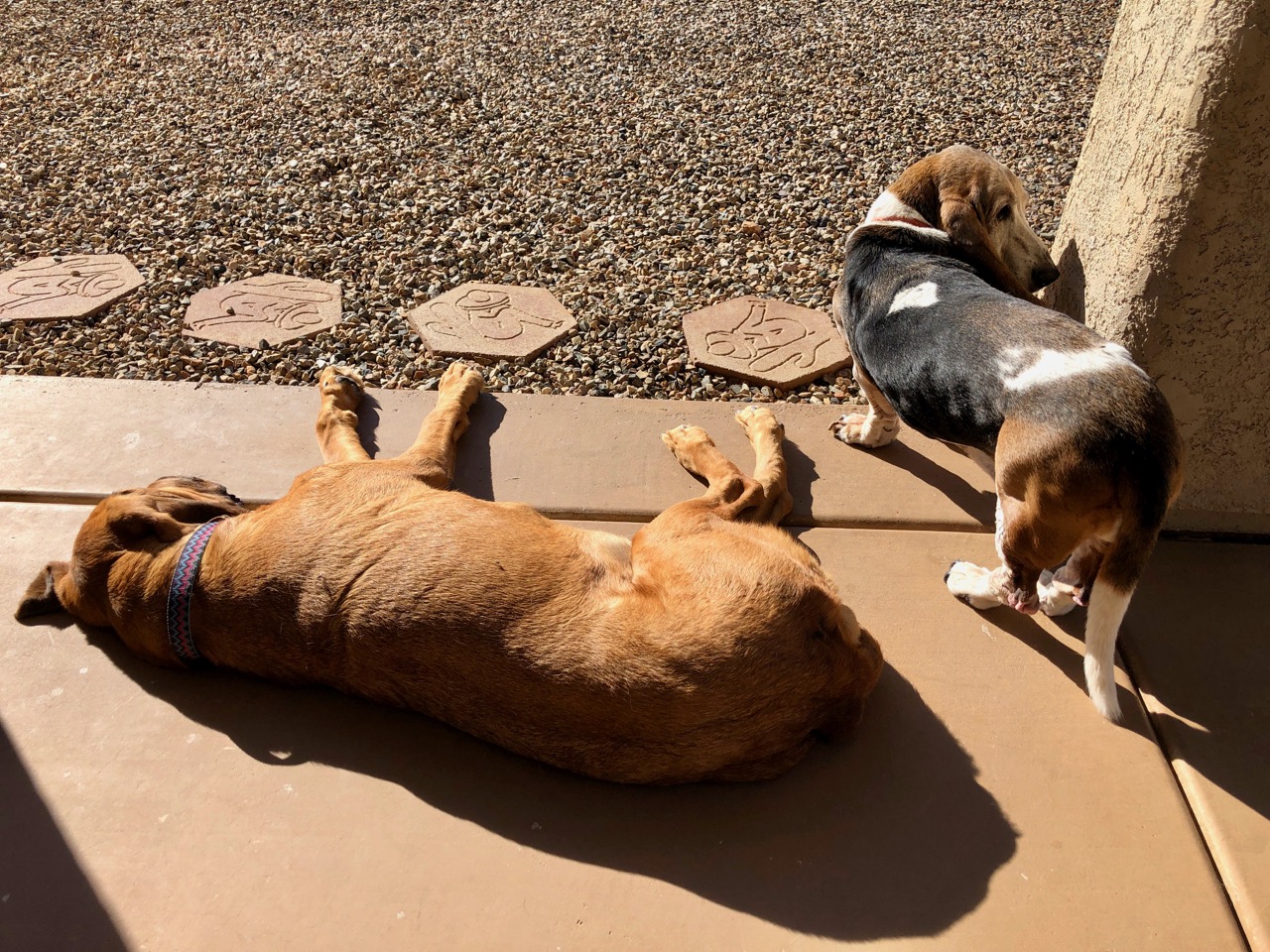 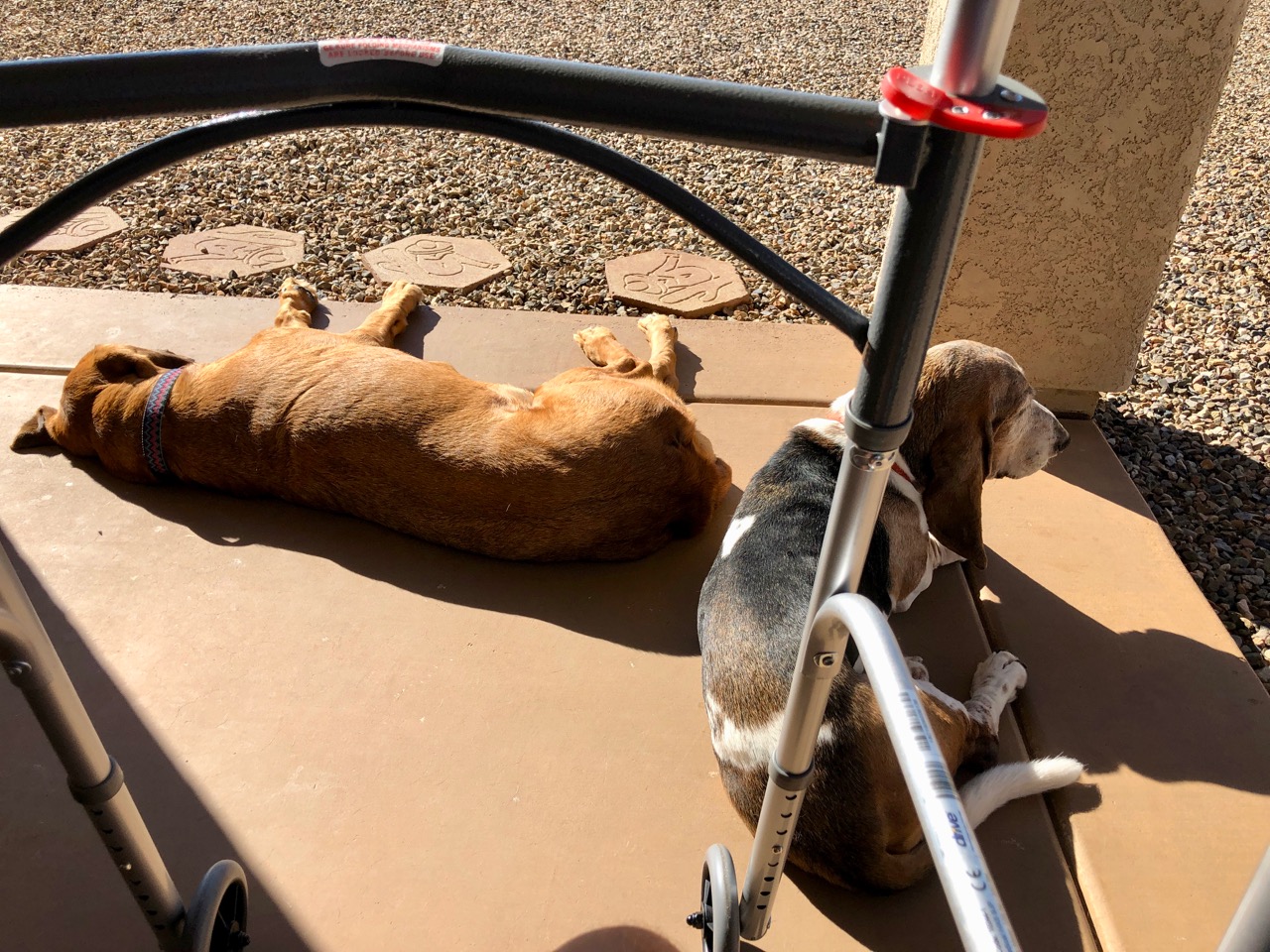 Both hounds have seemed to have adapted to having the walker around. 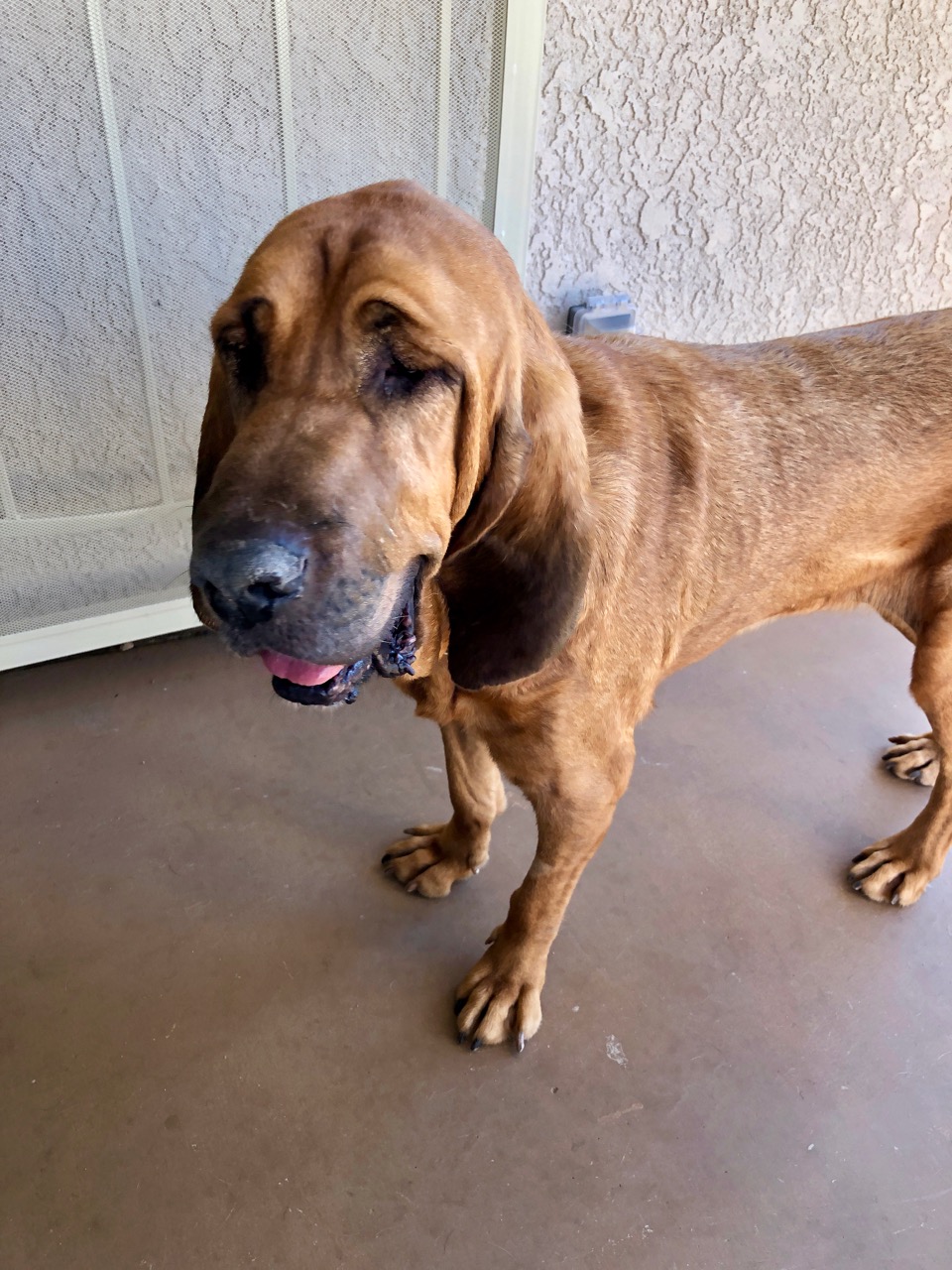 To hot, time for some shade. 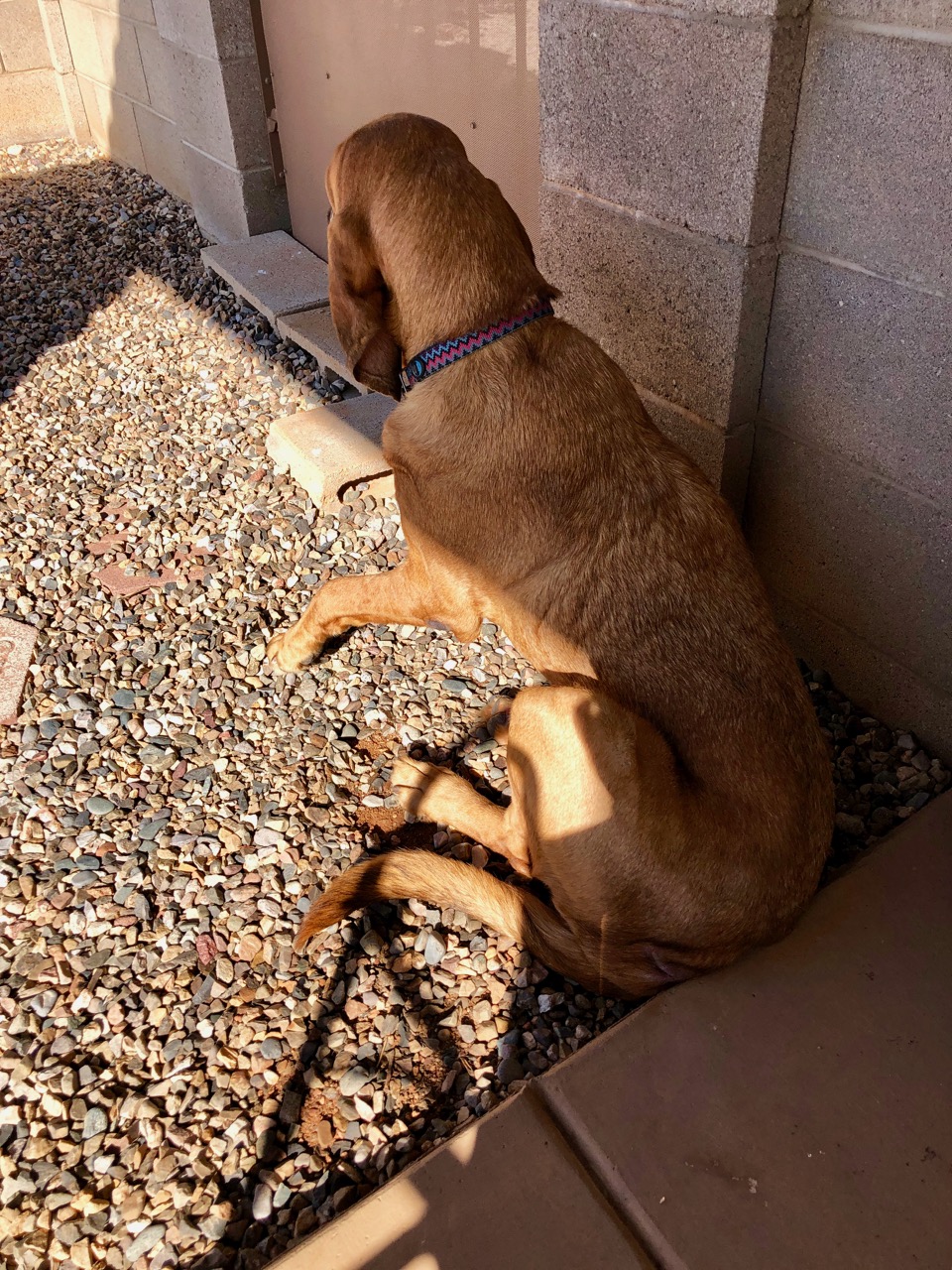 Not quite the perfect spot. 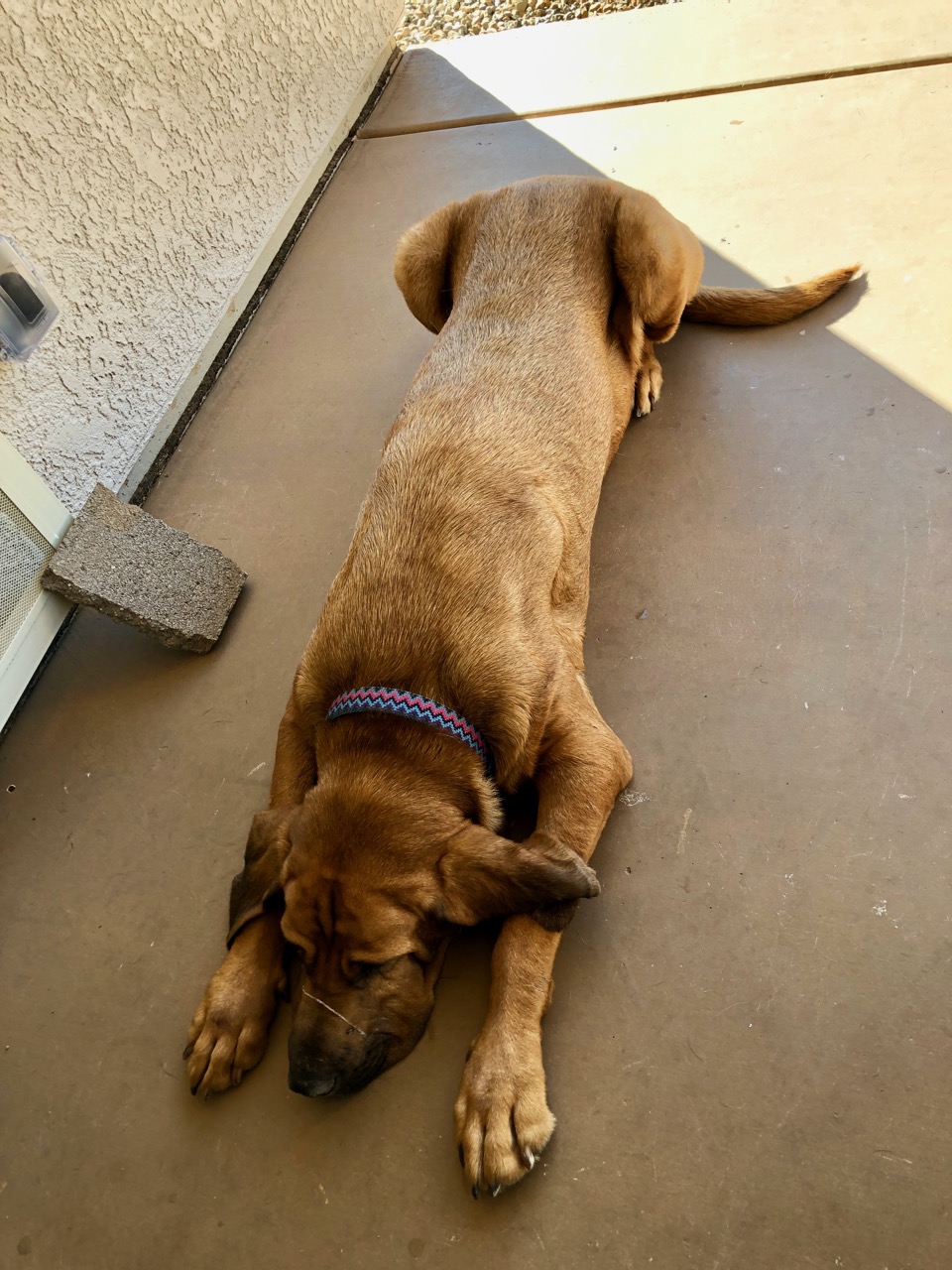 She waited here until "MJ The Pet Nanny" showed up to feed her breakfast. 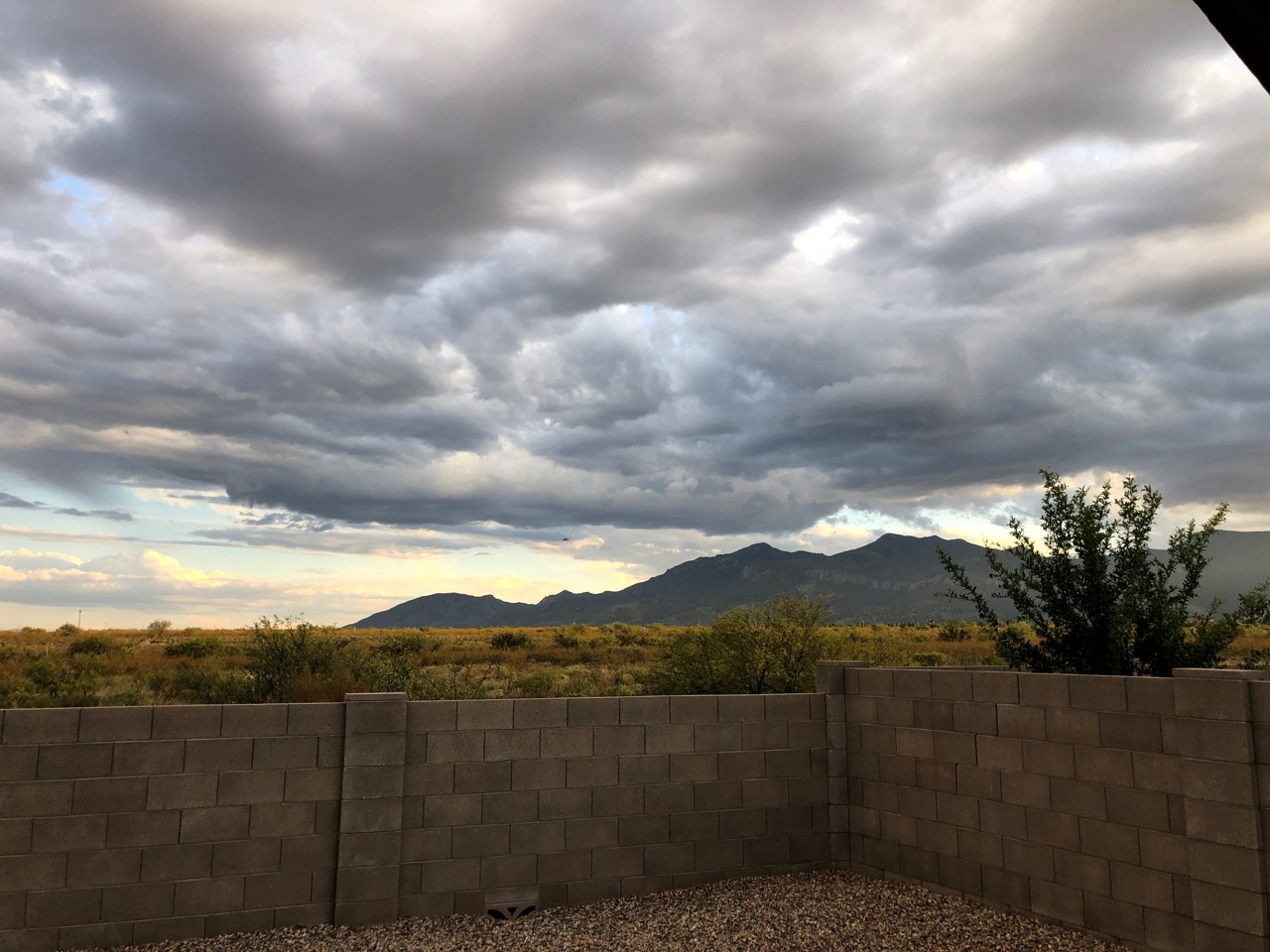 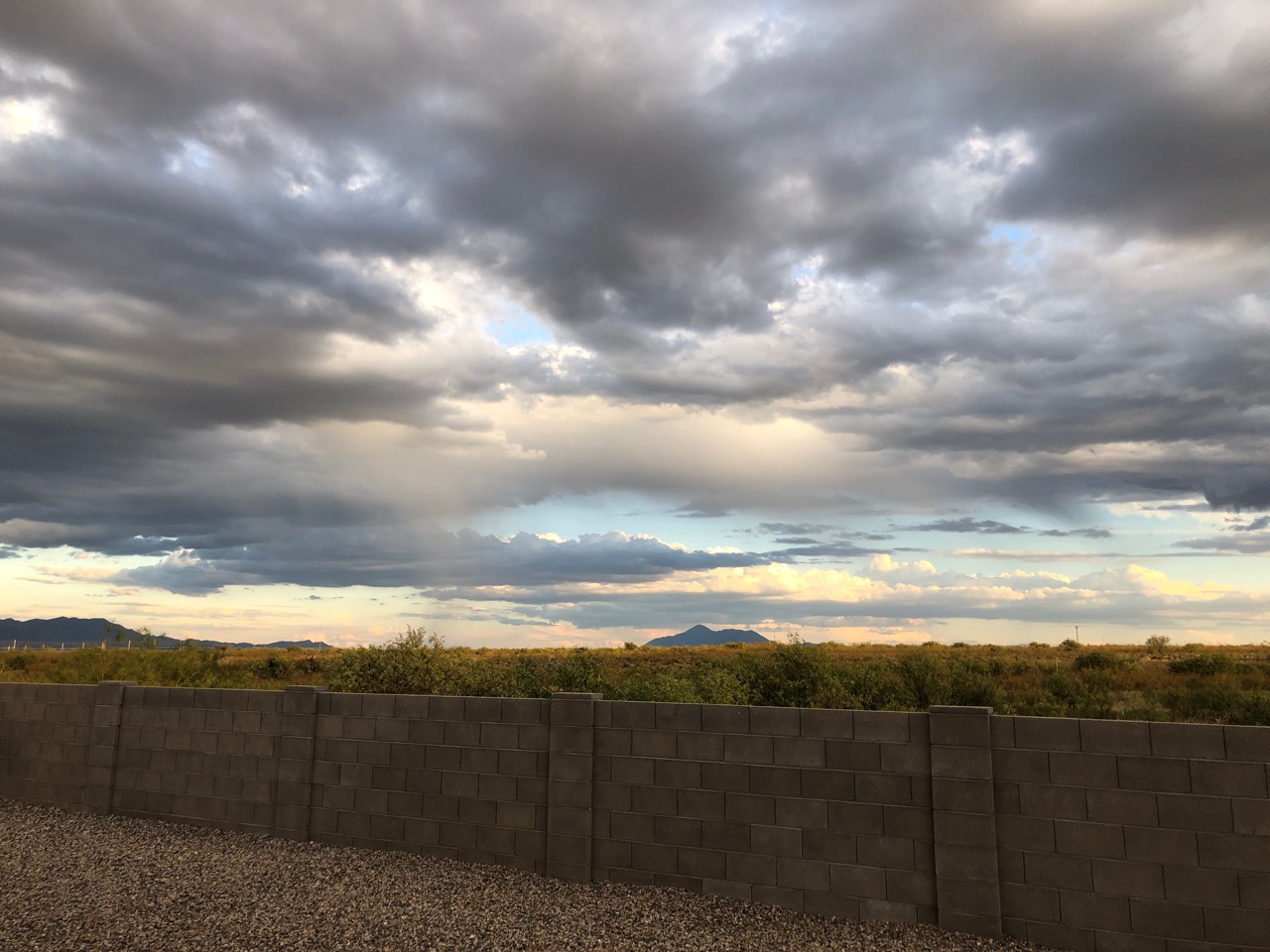 As I improve each day I have to really pay attention to what I am doing so I don't put my rehab back months and start over. I still follow the protocol rules that were given to me but I am stretching the window just a little. Nothing drastic. Maybe spend more time outside walking or sitting.

Right now though, it's time for a siesta .... I'll be back later to finish this post. 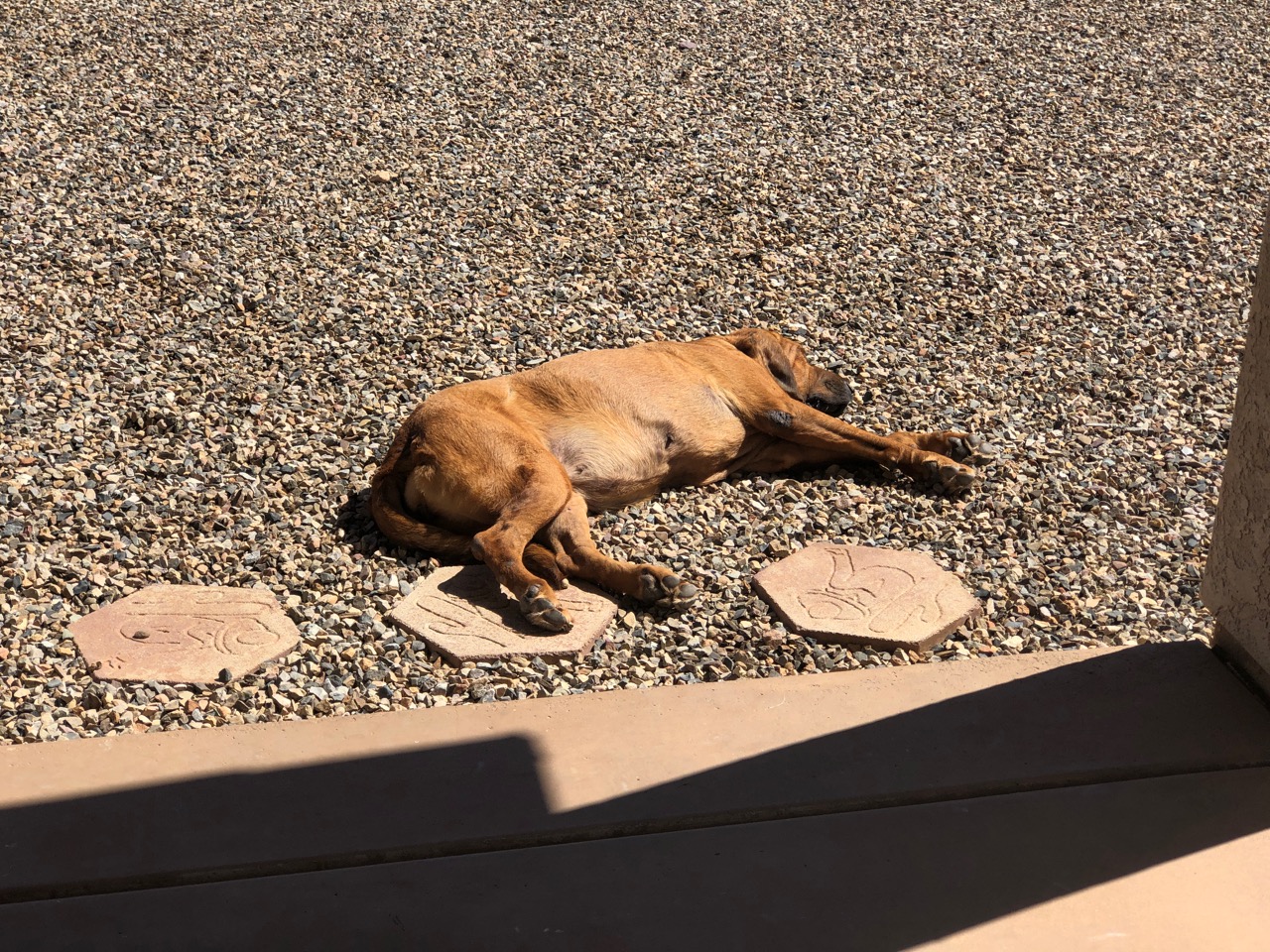 The afternoon wasn't much more than sleeping, peeing and fitting lunch in there in-between. I am not sure the reason but today the bladder has been in full operation mode. At least it was giving me some time to fit in some naps between 1.5 - 2 hours. Of course while I am sleeping the hounds are too, right there in the bedroom.

While I was having steamed broccoli and cauliflower with some cottage cheese for lunch, Stella thought it was the perfect time to spend outside. Those naps don't last much longer than 10 minutes but she is in the dream state while sleeping.

I don't feel bad today but the body told me to go back to bed about the time I tried staying up. No pain but the inside of my hip feels like one big glob of something. The swelling continues to go down around the incision. This is the strongest I have ever felt since surgery and many times I have thought I could put this walker away in the closet for a different time.

I didn't and won't until I hear what the surgeon says on the 24th, next Tuesday.

Stella has decided at least during the day she needs to sleep right by the bed but on the side where I put my feet when getting out of bed. So now I have to wake her up first and let her know I am swinging my feet over to the edge of the bed ... then slide the walker over. She is usually up and walking away by that time.

I wish I could pin point for you the one thing that is helping my leg and hip but I think it's a combination of things. The PT of course is making my legs stronger, knees stronger. Once you have strength in those you can do about anything. With additional vitamins and fresh veggies and fruit, grass fed beef and eggs ... I'm sure the muscles are getting enough protein and nutrients to rebuild themselves after the shock they have been through.

My friend sent me a text today telling me NBC in the morning is checking Al Rorker's progress as he had hip replacement a couple of days ago. I guess I'll tune in tomorrow to see what stage of activity he is at, although everybody is different and will recover at different speeds. What makes it interesting is that he has been on the strict Keto Diet for a long time. Is that type of eating good for recovery?

It will be a night of baseball and some NFL football tonight. Then prepare for another day. Time is passing fast I will say that. Tuesday will be here before I know it and he will recommend my next plan of action.

A beautiful day here in the Wild West.
at September 19, 2019
Email ThisBlogThis!Share to TwitterShare to FacebookShare to Pinterest