A Walk In Light Rain 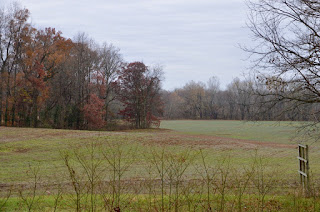 The rain that was predicted started last night but was not as heavy as expected. You could 'hear' the wet pavement of the highway as cars passed during our first trip outside this morning.

The hounds started their normal routines but today it was a little harder to convince them to come back inside so I could start my daily intake of coffee. Even yelling the keyword "coffee" did not get them to respond as they normally do. 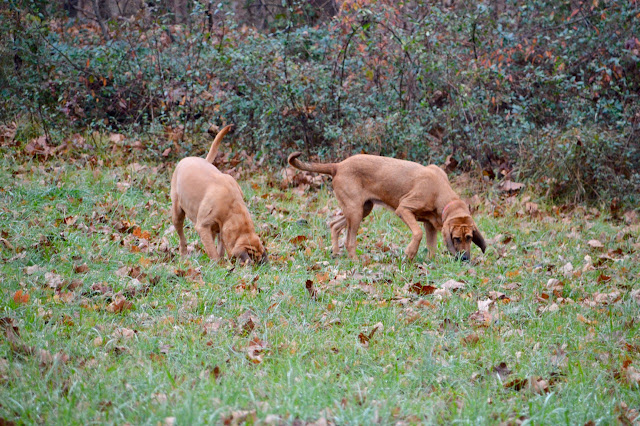 There is a cause to all of this ... they have a nose 200x stronger than people and a reputation of being stubborn. 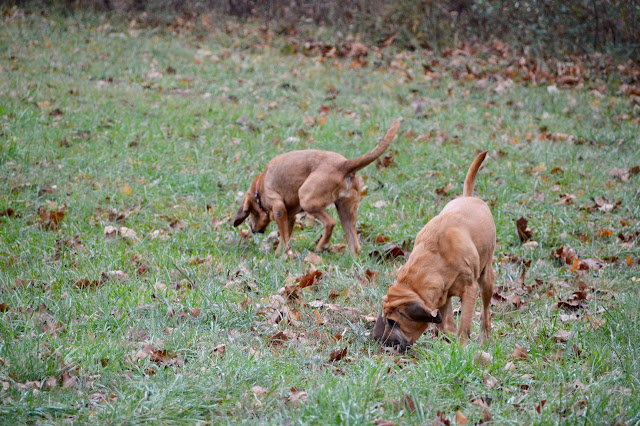 It never fails that Stella will aways take her time, possibly walking even slower than she normally does, when she comes to my call and she doesn't really want to. If I were to mention any kind of food in my yell, she would be sprinting for the door to get back inside. 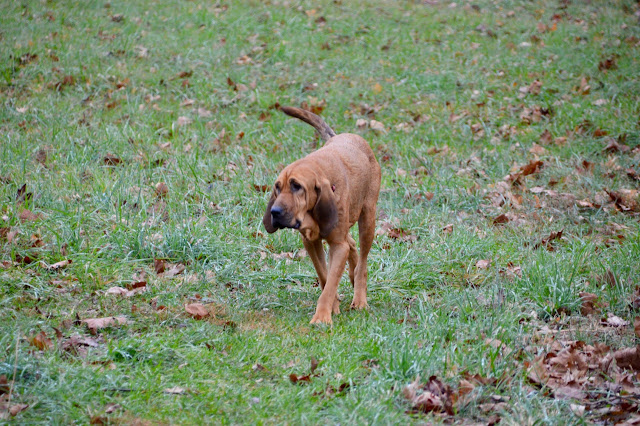 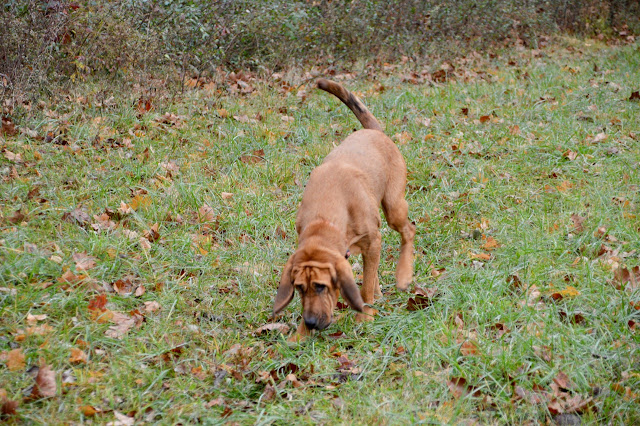 Just in case it would start raining harder later, I wanted to get at least one walk in this morning ... so I cut the internet reading short, waited to drink that 2nd cup of coffee when I got back and headed out. It was warm enough to switch from a down jacket and gloves to a all-season jacket, no gloves. Amazing how warm 45° feels with no winds. 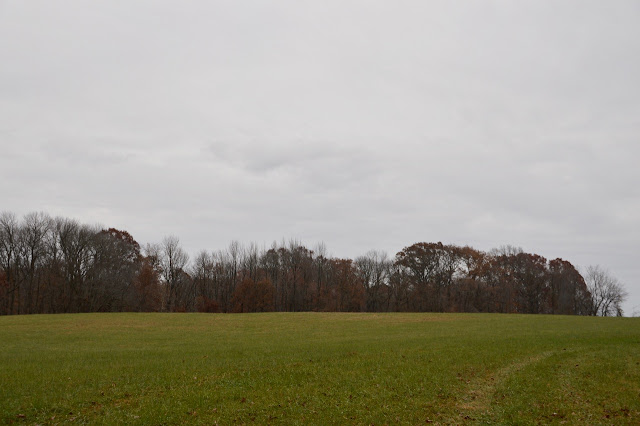 With a light rain I put the lens hood on the camera to prevent any rain drops of hitting the lens. It wasn't a steady downpour but it wasn't a light rain. It didn't matter to the hounds ... they had things to check out, not waiting for me. The Tamron lens has worked every day since I bought it last summer. Thanks Tom for the suggestion. 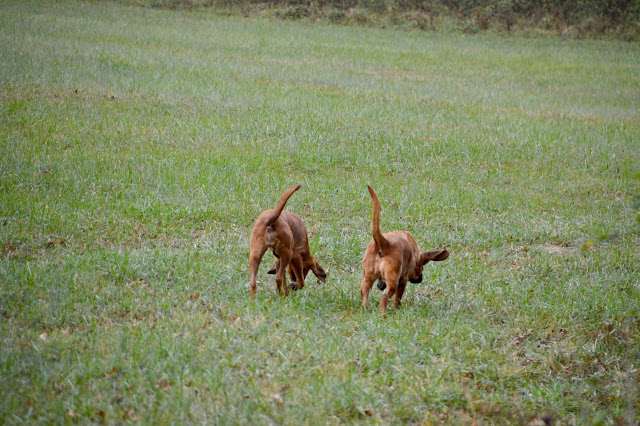 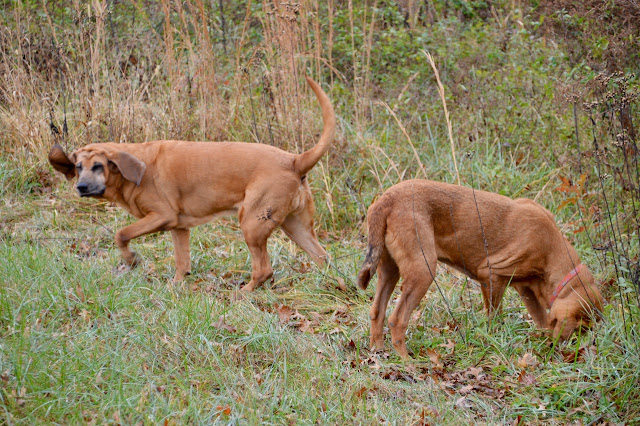 About the time I thought they would head to the far right corner, they made a left to follow the path. It's hard to say what their noses picked up to make that decision for them. It was a good move since we were walking in the rain. 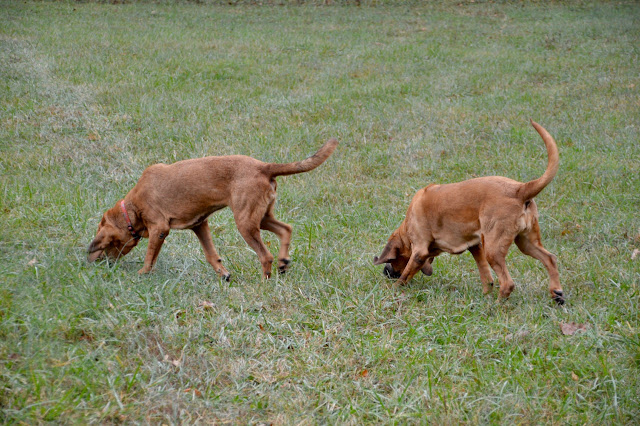 Whenever I go see what Stella is eating, there is nothing there. Her nose will have pushed the brush back to ground level and as you can tell, the brush is thick and deep. 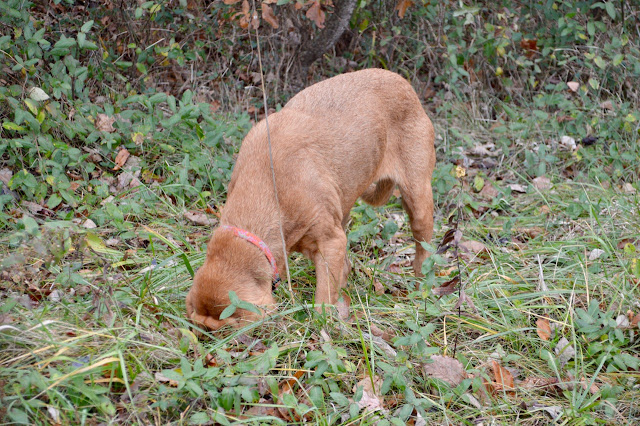 The amount of rain drops stayed the same throughout the morning walk. Both were happy to get back inside where the dropped in their normal spots for a late morning nap. Life's rough as a bloodhound ... very similar to being retired. 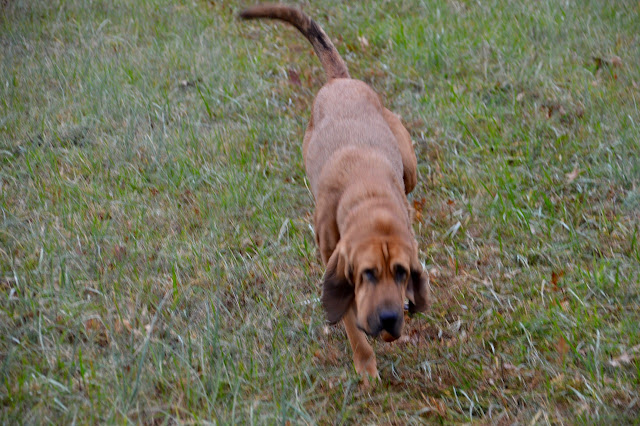 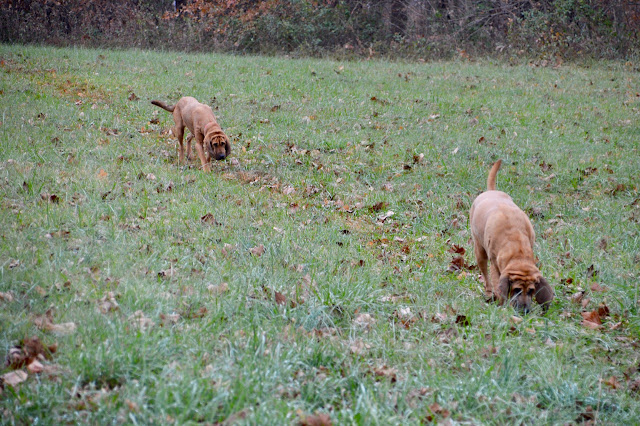 Yesterday afternoon after a lot of demanding by Sadie's stare, then Stella's howling ... we took out for the 3rd walk of the day on Tuesday. It was still pretty cold but the sun was out and the skies were blue ... very nice. 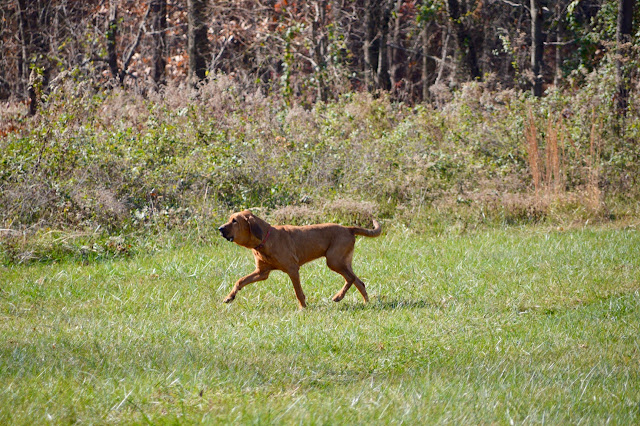 It was Sadie this time that stayed back in the corner and then came sprinting ... great exercise for her at 8-1/2 years old. 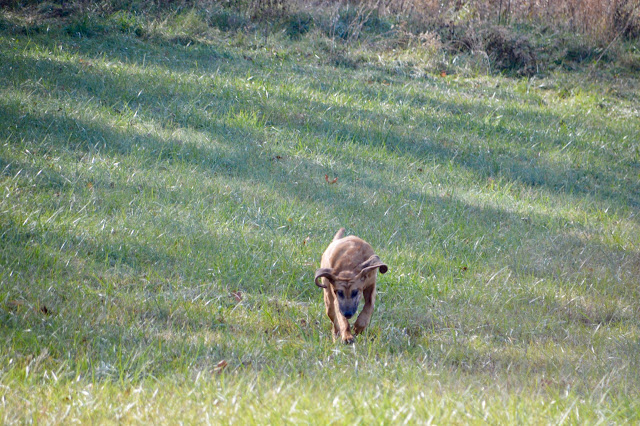 You may notice she is down to just one front tooth. I guess that is what happens when you are a puppy and are determined to get out of a large indoor kennel while I was at work. She chewed and even was able to bend those heavy black rods that made up the wall of the kennel. I was glad to finally put that kennel away, never to be used again. 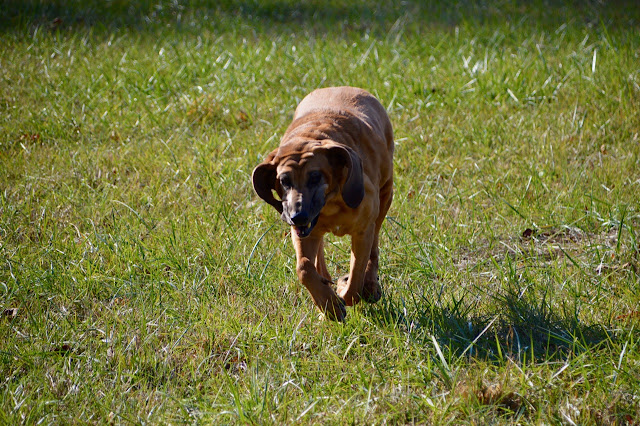 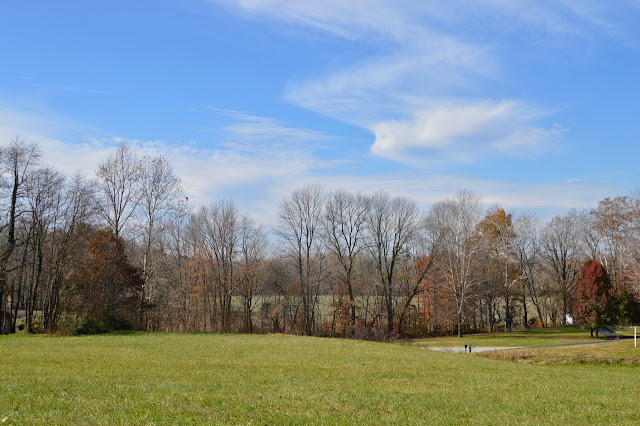 Just a few years ago, the wild brush that grew around that 75 year old fence post and those trees to the right, was so high and thick you couldn't see it or the base of the trees. I'm glad I became motivated enough in April 2015 to cut, burn all of that out and plant grass seed. 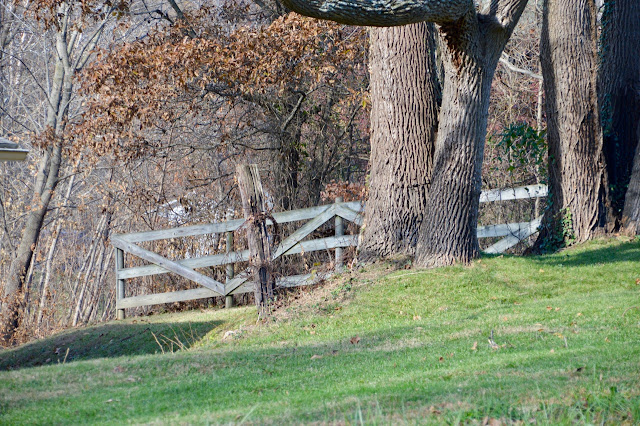 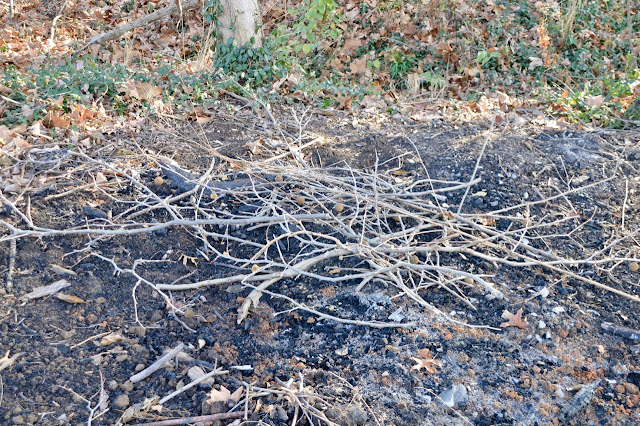 Yesterday was colder but so much nicer than today. I knew it was going to be one of those kind of days where the light rain or drizzle would never stop. Yet, plenty to do inside. Some new books to read, college basketball games, some college football games with plans of a lot of food to eat stretched out over the weekend.

Heidi had her 20 minute Epsom Salt soak today. Once again she almost fell asleep with her head propped up on the side of the bathtub.

As the day moved along, it continued to rain and a little harder. So we didn't get another walk in and stayed inside except for the short trips outside for them to dump their tanks. I did more reading about the Blood Type Diet and of coarse with anything written in a book or online ... the reviews voice both sides. I go with my intuition after reading reviews from what kind of dog food, to electronics and/or diets.

Here are some pictures of the hounds during "Football Saturday" or even during the week while watching IU games. Very rarely that the bloodhounds argue about couch space. Mine is a little smaller than your three section couch, so this past Saturday we had a power struggle going on. Instead of Sadie moving over to her chair by the wall ... they decided sharing space was better. 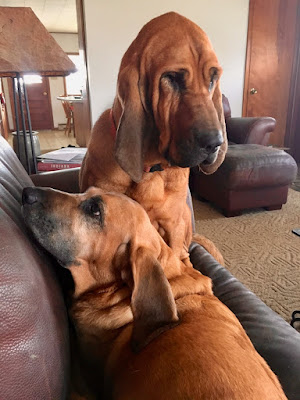 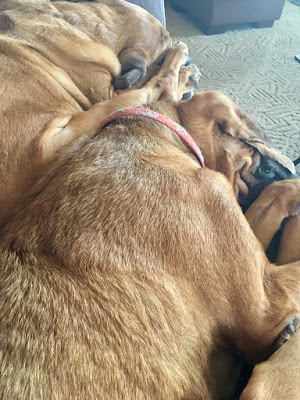 Heidi decided to move out from the bed to the couch. It must have been that Mexican blanket I pulled out of the old FJ and put it back into the active stack of blankets. I am sitting to the left of Heidi and Stella. 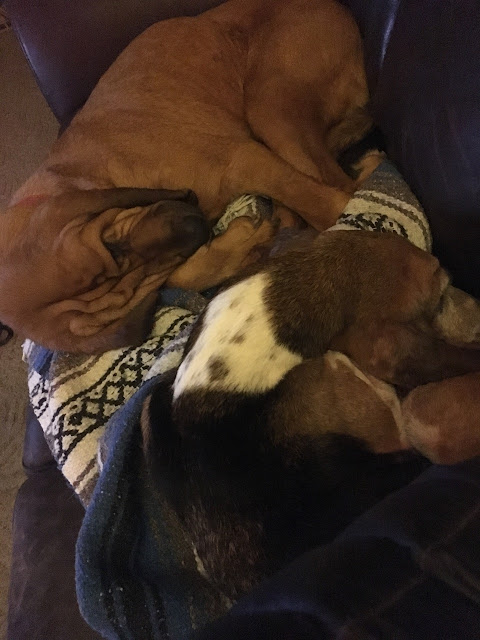 Happy Thanksgiving from the hounds and I here in 'the tropics' of southern Indiana.
at November 23, 2016