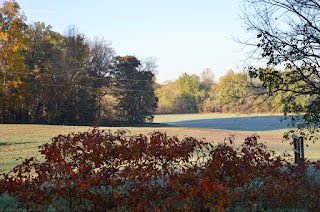 Being retired the change to Daylight Savings Time doesn't really bother me too much. I do enjoy the extra sunlight in the summer but with that brings darkness earlier in the winters.

It does the bother the hounds though. I had not even finished half of my first cup of coffee when I glance over at Sadie sitting in her 'pose' and the stare down telling me it's time for a walk. The time change will have Heidi barking and Stella howling today an hour early for lunch ... Indiana for many years never changed time.

During one of the times I got up during a commercial while watching football Saturday I noticed the farmer had moved his combine, tractor to the field across the highway. Since both fields had been harvested I assumed they were there just to be parked.

Last spring they spent days working on a broken tractor ... I am not sure what kind it is and I am too lazy to look it up, but looks like they bought a nice replacement. 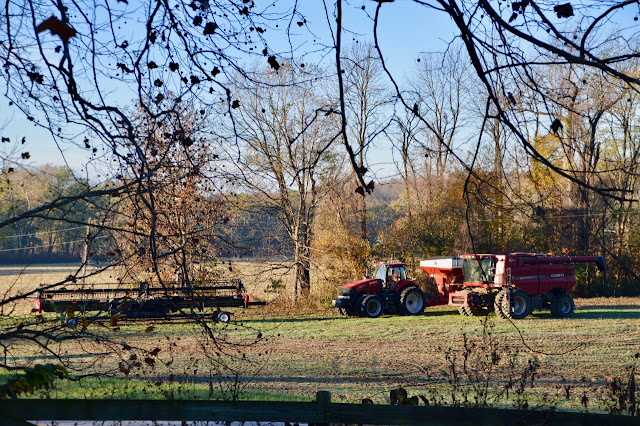 I forgot to mention that Sadie also gave me that look she has when she wants to walk ... only this picture was one of the first pictures taken, even before I had my first cup of coffee. 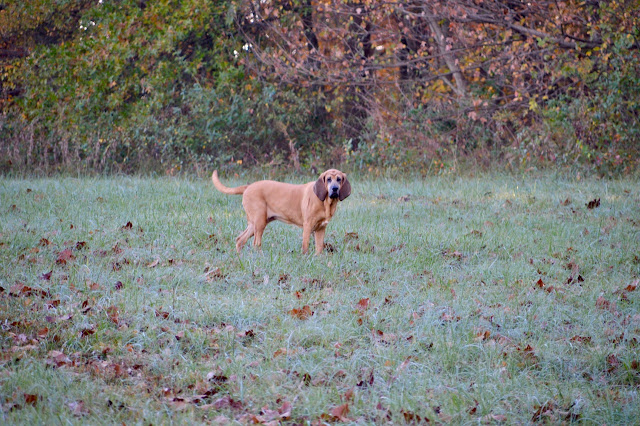 While reading the internet this morning I heard them start up the equipment. Since it was colder than I liked this morning I took these pictures standing in my kitchen, looking out through the carport. It looks like they had just a small amount of soy beans left for the year. One last drop I guess. 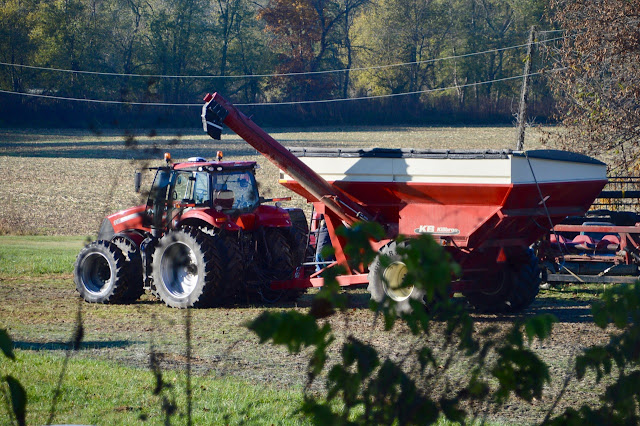 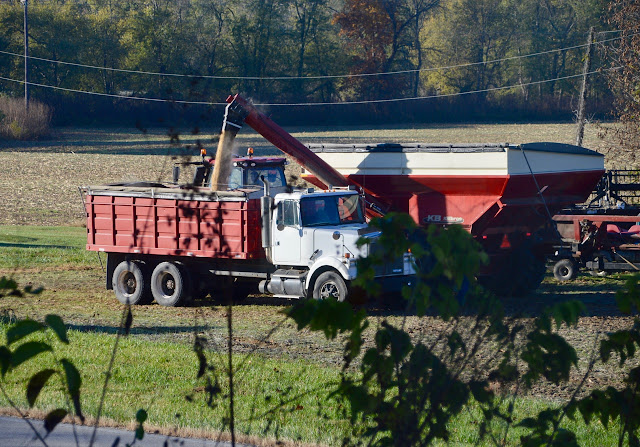 By 9:45 am (new time) we were off on our first walk of the day. Only today I wimped out and changed the cargo shorts for a pair of jeans. I can already tell that I am not ready for what's ahead in weather this winter. Hopefully these 60's can hang around as long as possible. 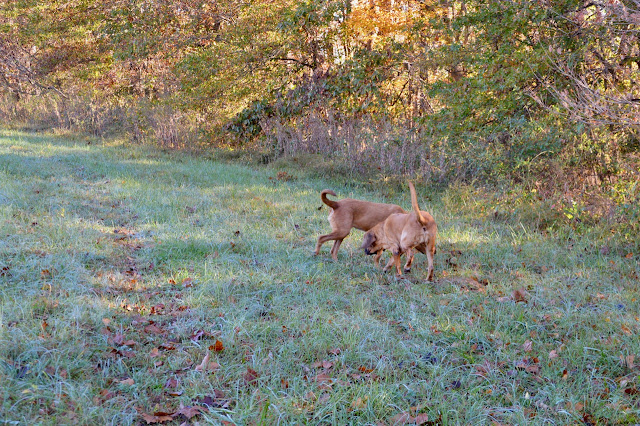 With the grass and leaves being really wet, I once again told myself, pulling those unused hiking shoes out of my closet a few weeks ago was one of my better decisions. No wet feet, especially when it's in the 40's, is a good thing. 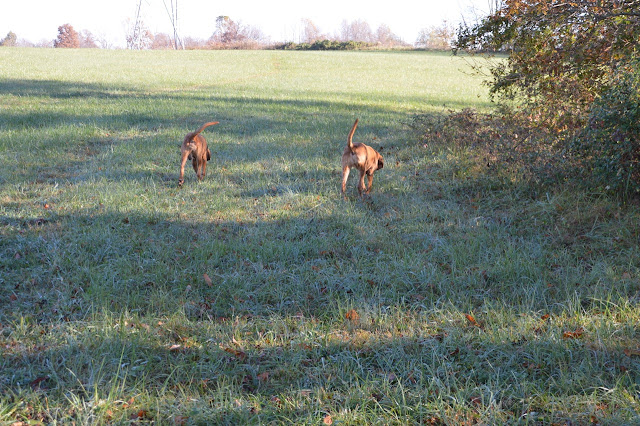 Maybe it was the new scents of the day or the cooler temps, but Sadie and Stella had an extra bounce to their step ... or was their increased energy due to the time change? 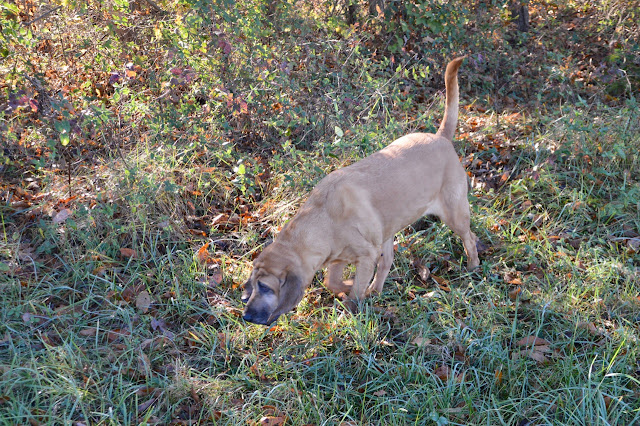 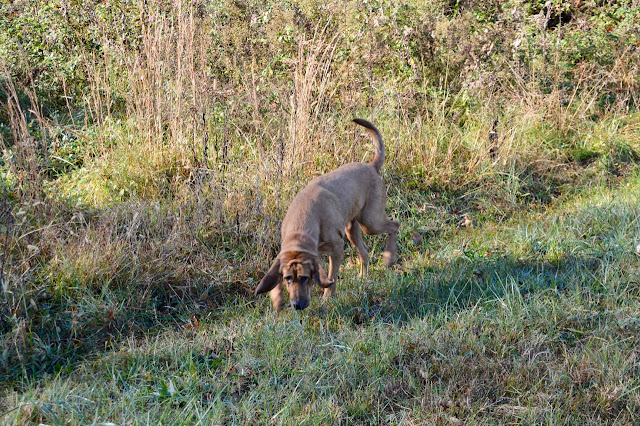 I couldn't keep up with them during most of the walk. Nor did they wait for me. They had places to go and things to check out. 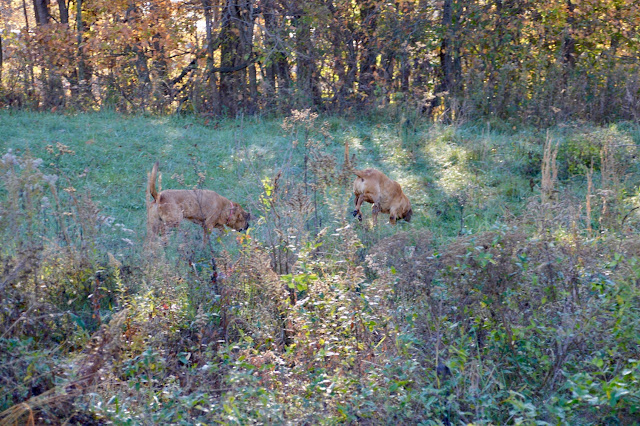 It is when Stella gets into this position that she is oblivious to everything around her, every word spoke to her ... everything. I don't but I would almost have to grab her collar to get her to move ... instead I just keep walking because I know she will eventually head our way. 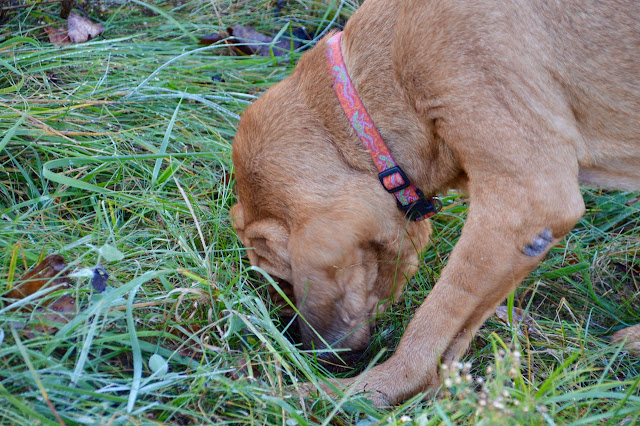 Her and Sadie bolted around me and took off along the back edge of the field. 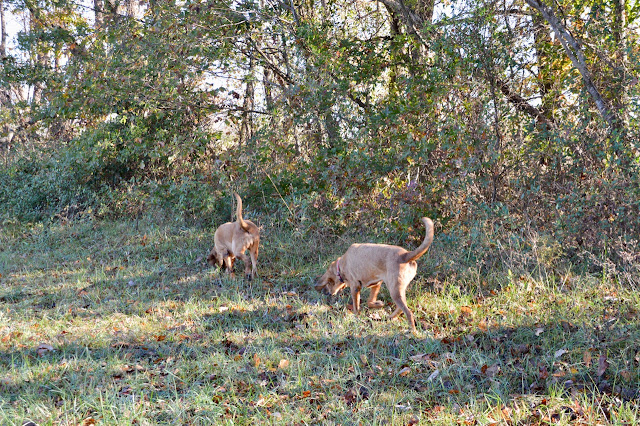 I knew by this point and by this picture, they were headed for the 'no fly zone' ... meaning "Out of Bounds". 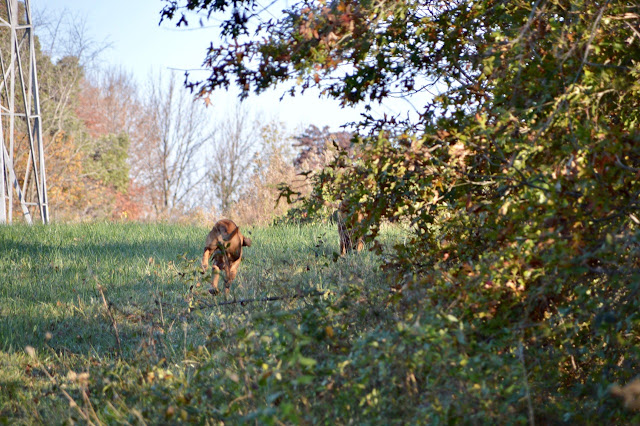 They seem to respond to the word "hey" if I yell that. They stopped, looked up at me and headed somewhat in my direction, at least the opposite way than what they were doing. 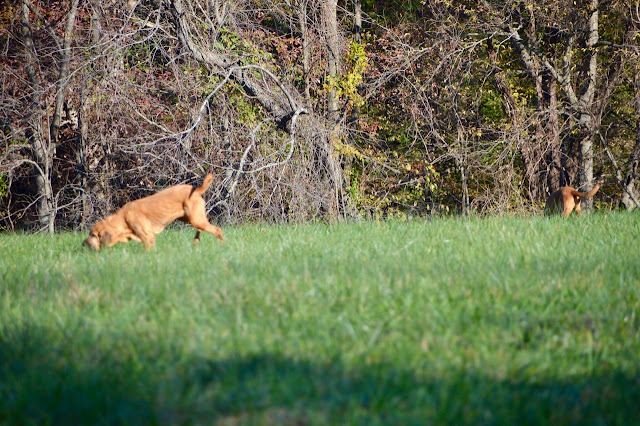 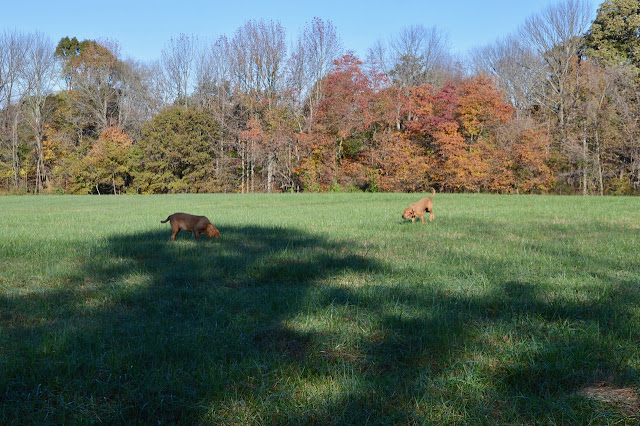 With them to busy exploring their latest scent, I was able to catch up to them and told them it was time to go home ... they both headed that direction. 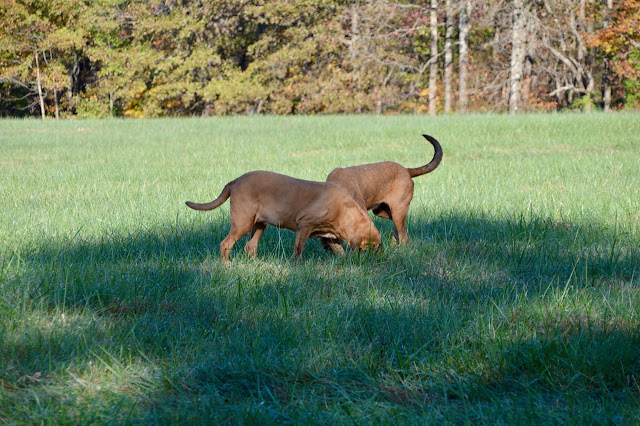 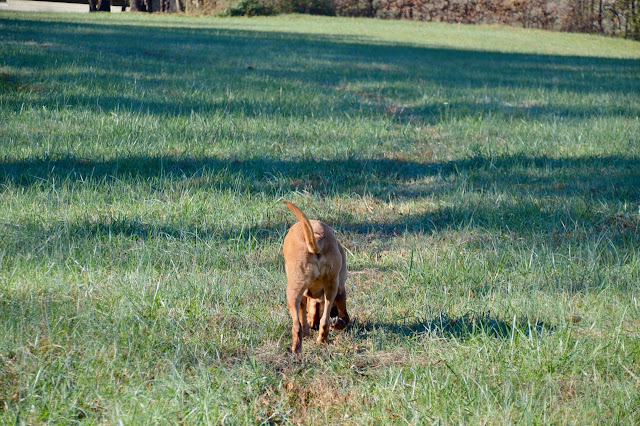 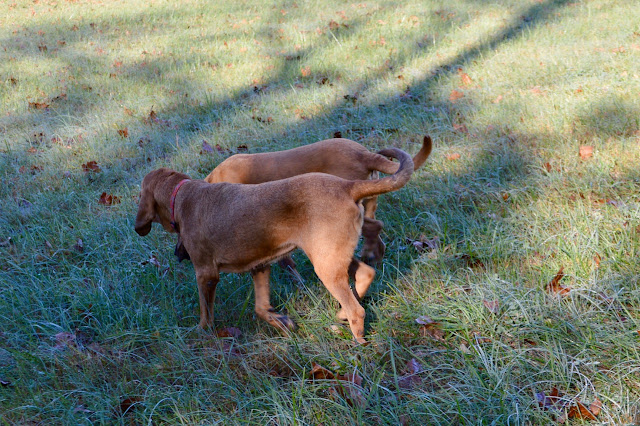 By the time we returned to the house, their noses were cold and wet, their ears were wet and they declared it another successful walk. 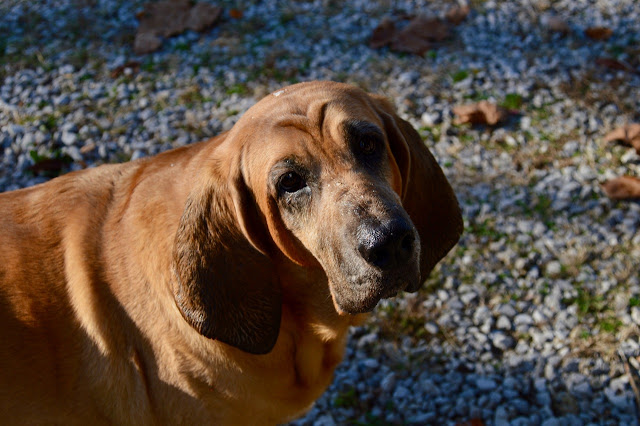 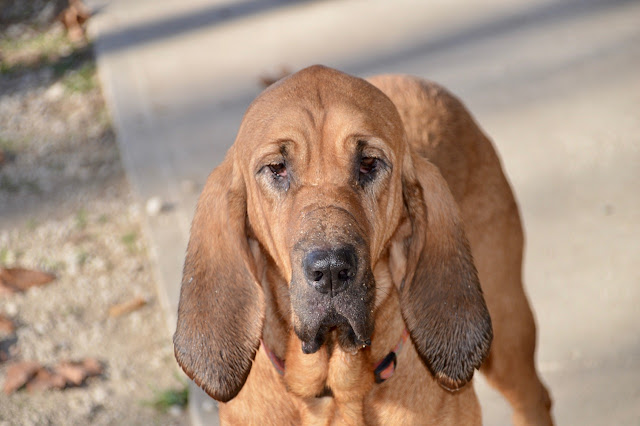 It was just like clockwork around 11am. At first I thought Stella was just letting me know we were pretty good friends, as she slid her nose under my arm while I was trying to type on the computer. After a couple of minutes, she decided to start howling to let me know it was lunch time. We waited until the 'new noon'.

For some reason I wasn't in the mood for NFL football this afternoon so most of the day was spent reading books, a short siesta and some time outside without the camera, enjoying the weather.

Maybe it's the cooler temps in the mornings we are now having or the feel of winter is coming ... but I have added a lot of the blogs to the list on the left side that I had deleted over the past month while trying to downsize that list. I assume that some of you use that list as a way to read other blogs without having to bookmark them yourself.

It's a good ten day forecast for 'the tropics' of southern Indiana ... I can live with it.