Hounds Are Happy It's Friday 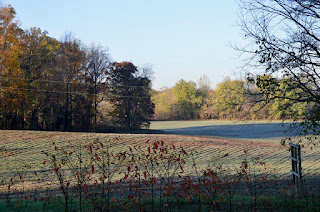 First of all thank you to all the readers that are veterans of the US military. They make or have made a lot of sacrifices to fill those positions.

Well it's been quite a week to say the least. I am happy to be back to just looking at news headlines and not reading their articles while I move my focus back to sports, hounds, blogs, and a little house maintenance to prepare for winter.

I am sitting here wondering just how long can a blog post be, with it not being too long. I wrote a post yesterday afternoon with about 15 pictures, saved it with plans to add to it and then post it around 6:30pm. But the afternoon changed and I forgot about the post until this morning. 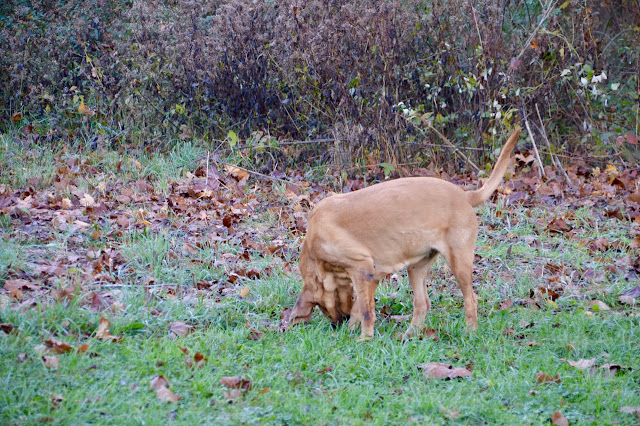 This morning started out as always. Yet it was about 10° warmer this morning but that didn't mean the hounds stayed outside any longer. They know how important coffee is to my start of the day so they didn't stay outside very long. 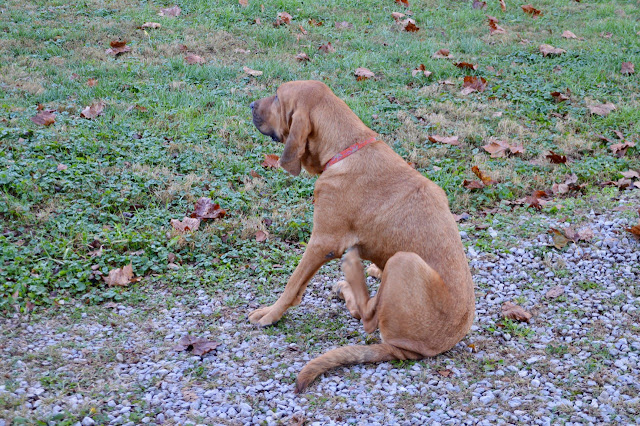 Once I saw the temps rise above 50°, we headed out for a walk. They didn't wait on me either ... they were off as soon as their feet touched the field. 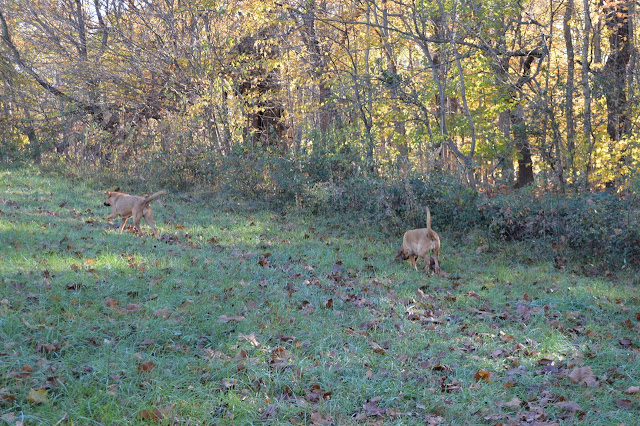 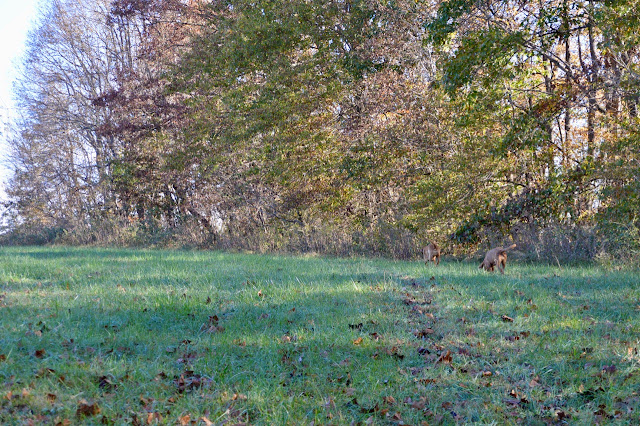 They had already dictated they were going on their own pace and I was fine with that. I was enjoying the clear skies without a cloud anywhere, no humidity of coarse and the temperature felt about right. 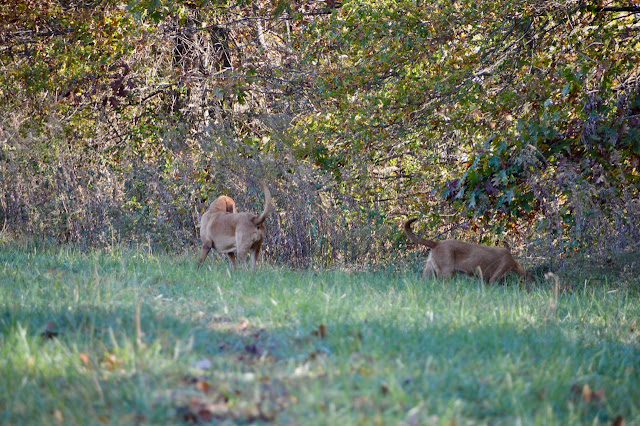 With Stella staying pretty far behind Sadie and I ... it was quite a surprise to see her running to catch up with us. I'm not sure what her reasons were but she sprinted fast enough that my camera could not keep up to catch all of her sprinting. 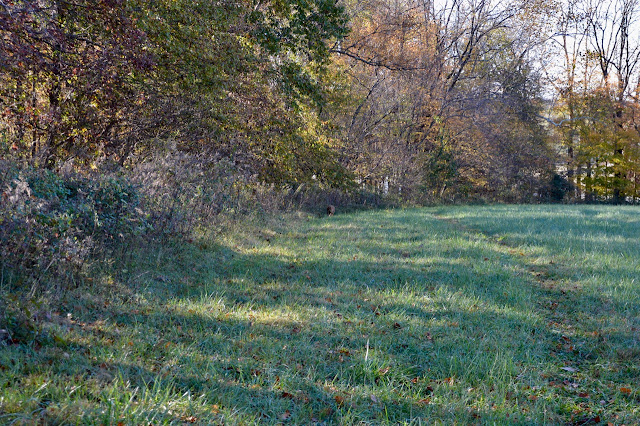 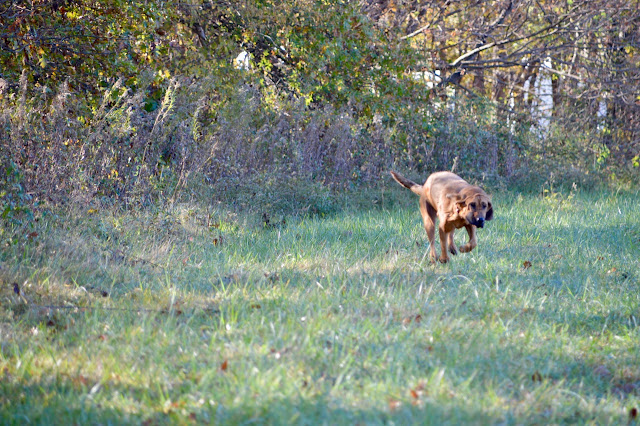 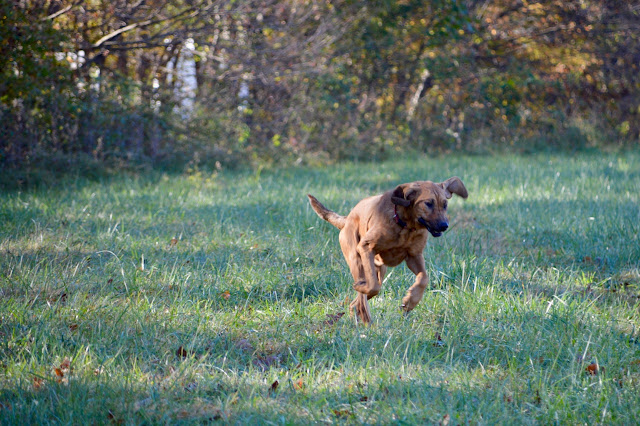 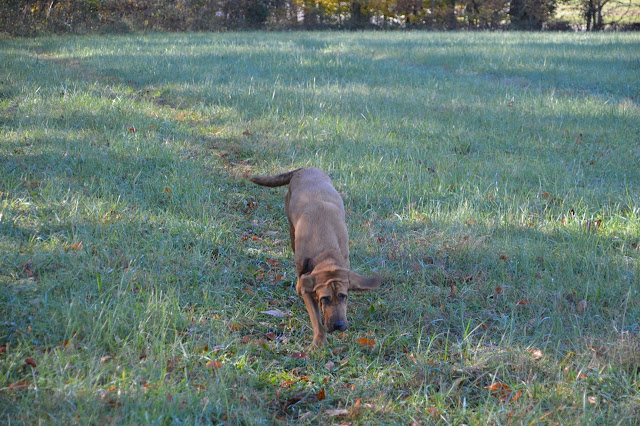 Sadie took another look in back to see if Stella was coming or not. As soon as she saw that Stella had stopped again, Stella took off for the right corner of the field. 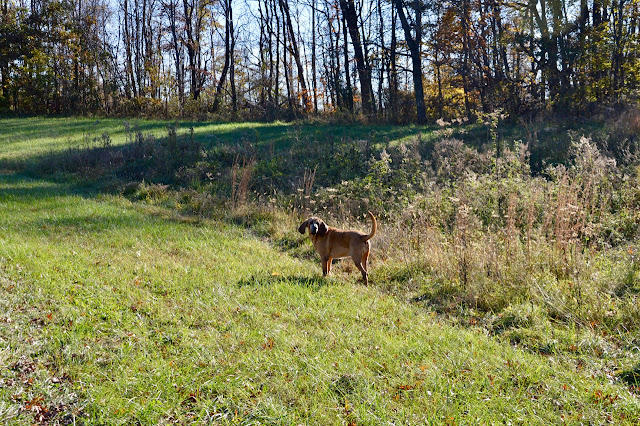 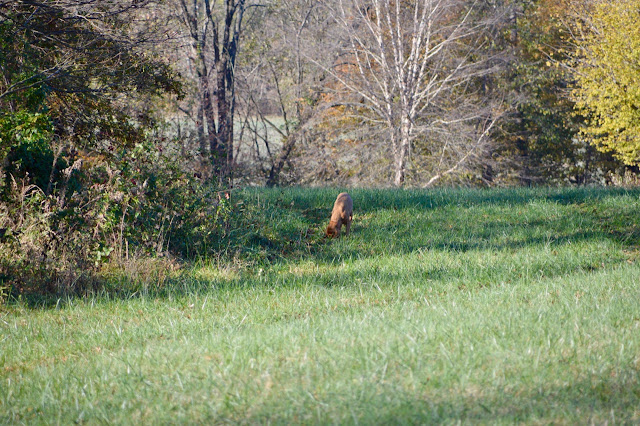 Then again ... Stella came running to catch up with us. I'm glad that every day is different with her. 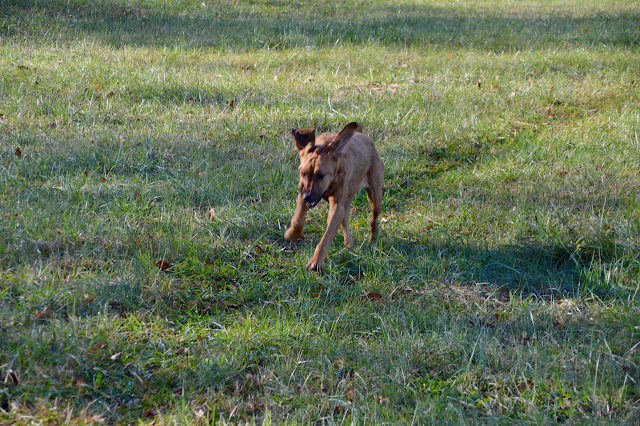 During our afternoon walk yesterday I caught this.

Earlier while at the computer on Thursday morning, I heard the warning beeping sound of a truck backing up. I went out to the large window to see what it might be. Due to yesterday's fog I could barely see a State Patrol car blocking highway traffic but could not see what was backing up due to the thick fog.

It looks like this might have been some of the equipment on the move. It would have been too long to make a left 90° turn but with the dirt road going the opposite direction to the old bridge across the highway, something that long can make some 3-5 point turns to back in that road to make the left hand turn. 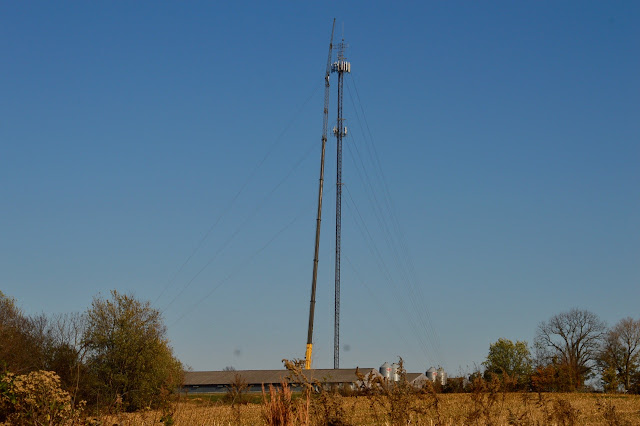 This is an AT&T tower that has been there for around 15 years and it will be interesting to see if they are going higher or just adding more equipment to the tower. It's strange that I my house is that close to a tower but when I had AT&T a couple of years ago I could only get 3 bars max for signal strength. Even a couple of weeks ago I was told by AT&T they could not offer any wireless internet in my package. 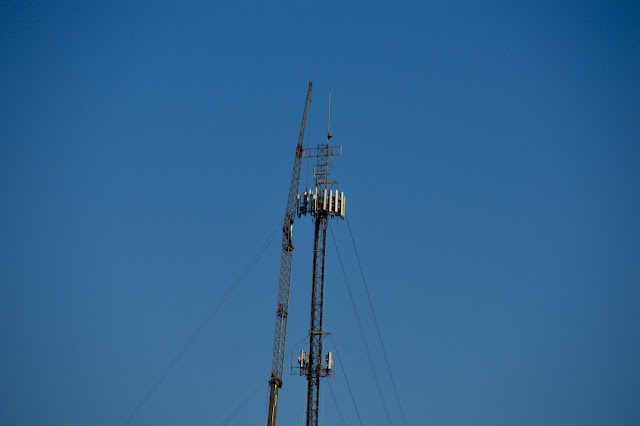 This is what I saw this morning so there wasn't much change. Maybe it is waiting for the next phase of either repair or installation of new equipment. 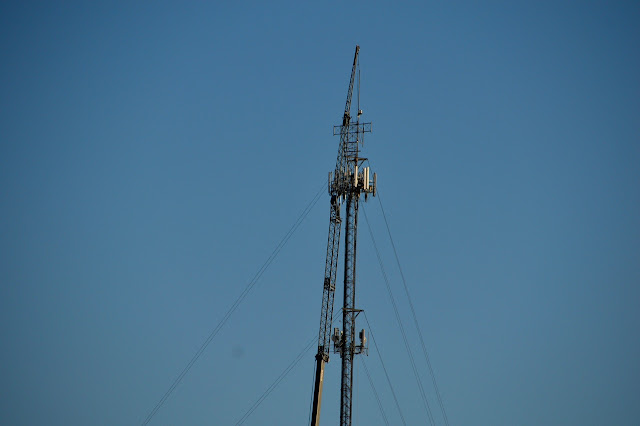 Once I mentioned getting some 'food' to the hounds when we got home, they both were pretty motivated to get home. 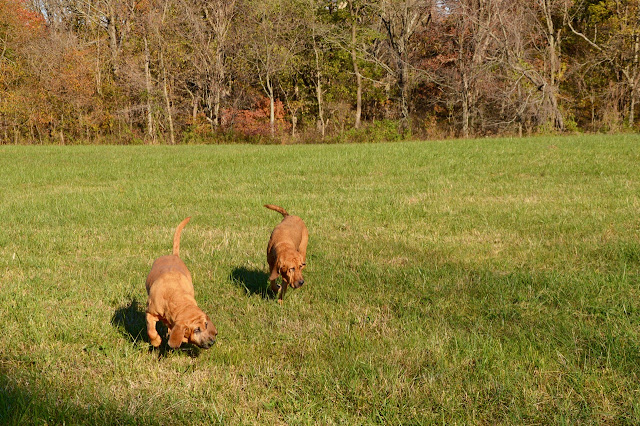 Yet, there were enough places to stop and identify before moving on. 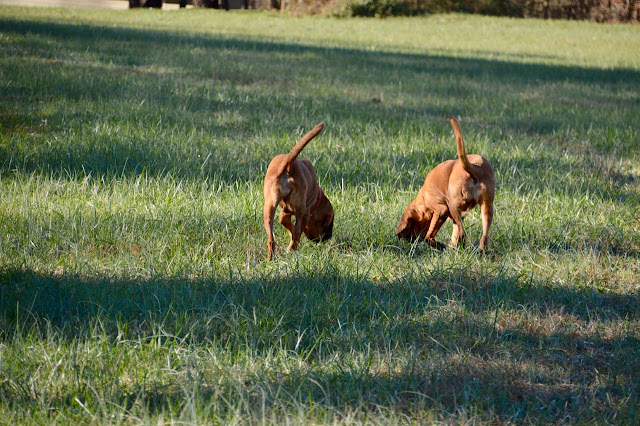 I'll implement some of the post I wrote yesterday afternoon and take a chance that I have not make this blog too long. At least for those readers that just scroll through to look at the pictures (nothing wrong with that), they will have more to look at.

*************
Heidi made a rare appearance outside to walk around instead of just long enough to pee. Her skin is actually getting better with the places where she has bare skin or little hair, is becoming softer. More hair is trying to grow back on all of her legs and paws. It's been a while since that has happened.
She will be getting a bath today (Friday) and her nails cut. 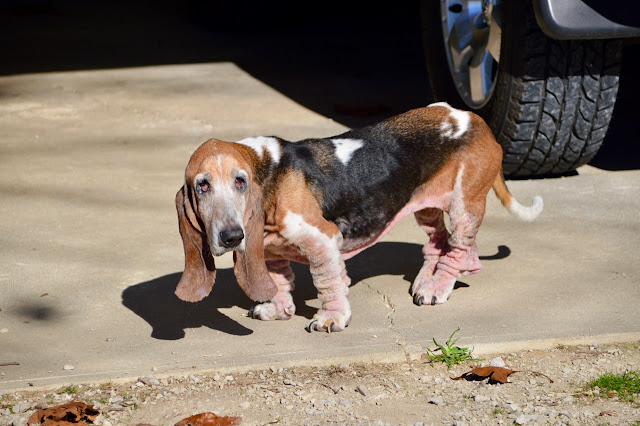 Lunch had been served with the normal routine of going outside right after being fed. Something that was done when house training Sadie when she was a puppy. Heidi and Stella were brought home when they were older dogs, so I am not sure if that was their routine when they were puppies.

I was going to let the bloodhounds wander the field and keep an eye on them but I saw 'the stare' ... the one that Sadie gives me when it's time or she wants to go for a walk ... which is all the time. 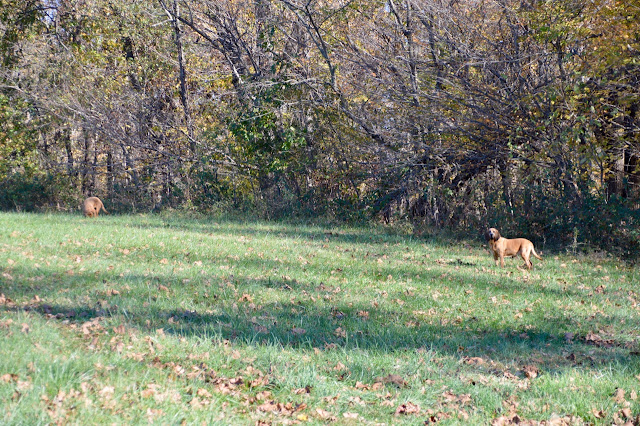 Once she saw me walking toward the field with my camera in hand she came running to escort me on the start of the walk as she always does. She will actually try to grab my left hand with her mouth as she is hopping up and down in excitement. 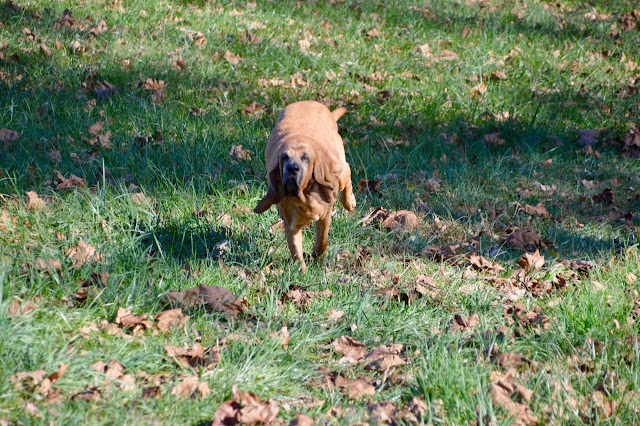 I tried to keep the walk moving and Stella came with a little coaxing. I am sure if I had not said anything Stella would have stayed back for most of the walk.

Around that first turn and we were headed to the right corner of the field. 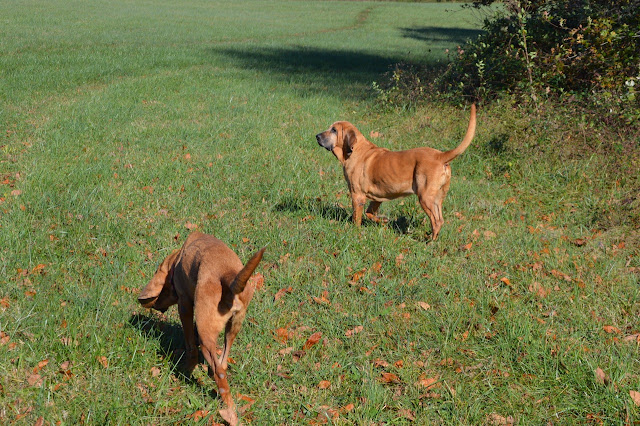 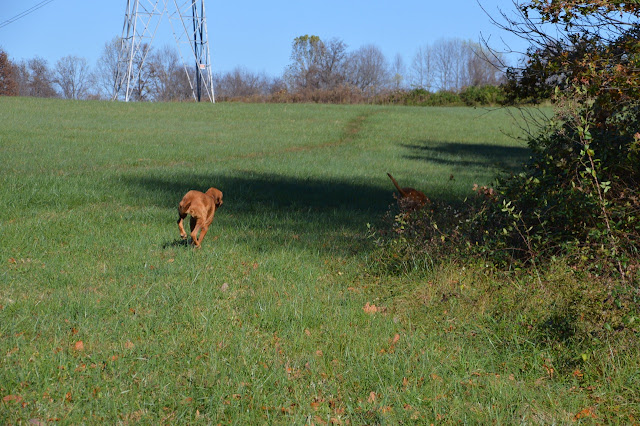 Today I decided I'd join them in the area of that right corner where there are a lot of signs of deer activity. While the hounds stayed and did what they normally do, adding protein of some kind to their diet, I walked toward the gully. 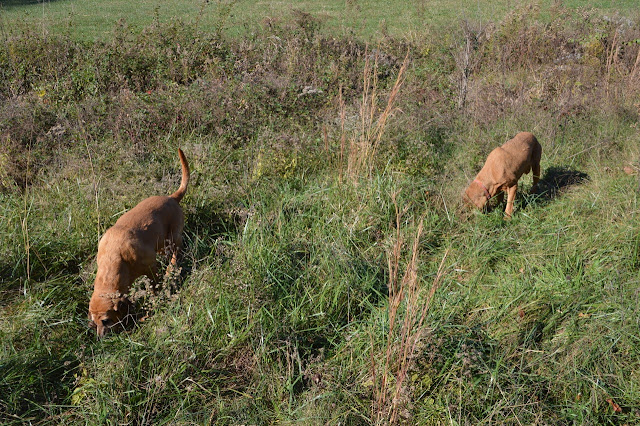 You can see the tall brush that has been mashed. I know nothing about deer so I am just assuming they might spend time here sleeping, not sure. 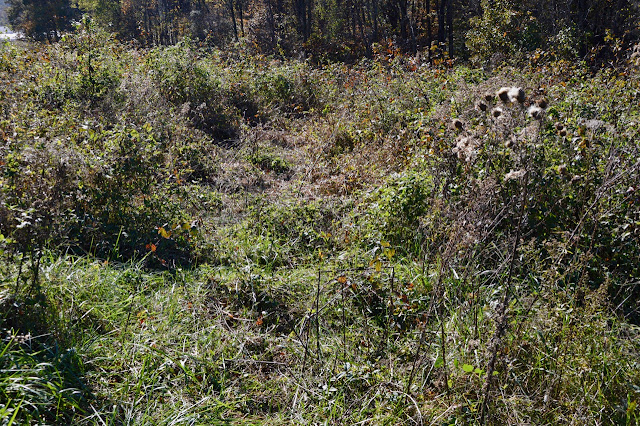 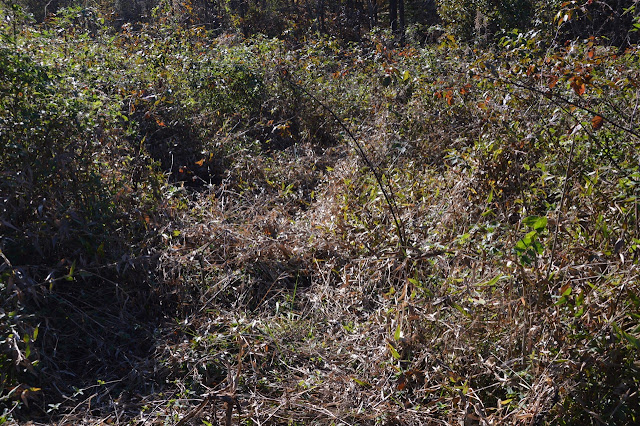 I have taken pictures before trying to show just how steep and deep this gully is but I'm not succeeding to many times. 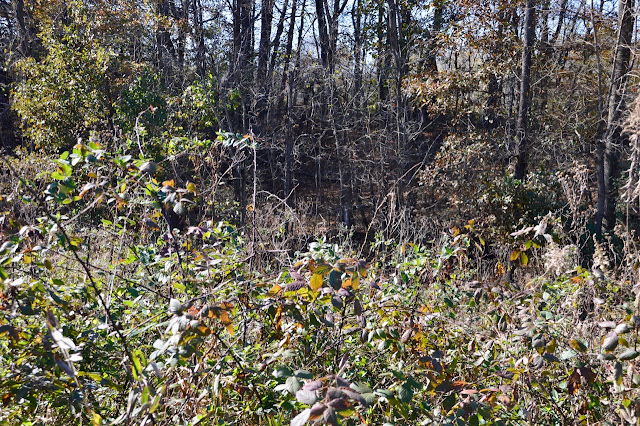 On the way back, Stella gave me a look that she had seen the neighbor. He was out on his riding mower sweeping up leaves in his yard. Their clothes were out drying in the sunshine so I thought she might take off again since she seems attracted to their clothes line. 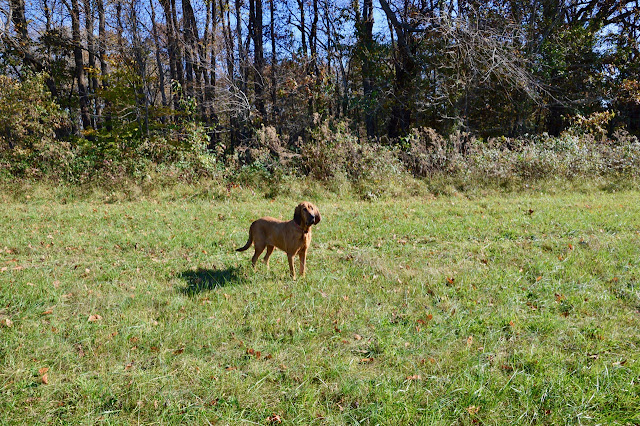 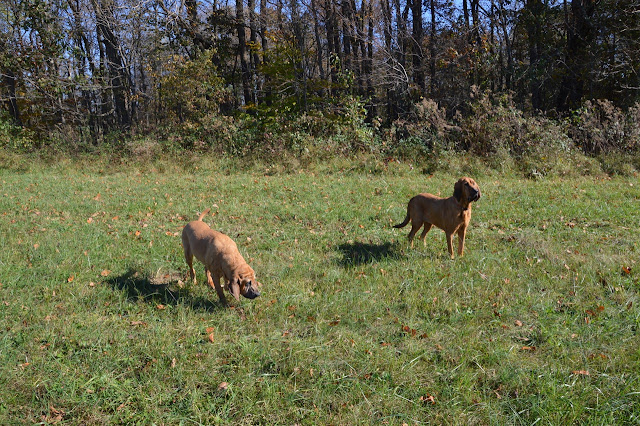 Thursday afternoon turned out great with temps getting up near 60°.

College basketball starts officially tonight with regular games on tv instead of the exhibition games. Football of coarse continues through the first few weeks of January for colleges. I think I have my own little NFL boycott going on as I have been watching it a LOT less than I have in past years.

Another great Friday so far here in 'the tropics' of southern Indiana.
at November 11, 2016