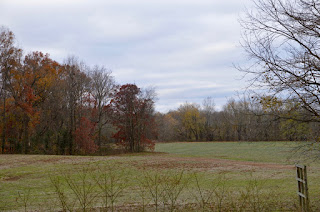 When I opened the door for the hounds to have their first trip outside Saturday ... what a rude awakening ... it was freezing.

The strong winds from the southwest had blown the memories of summer completely away and far enough that I could not even remember just how warm it was just 24 hours before. Even Sadie didn't stay outside long for her trip after eating breakfast. 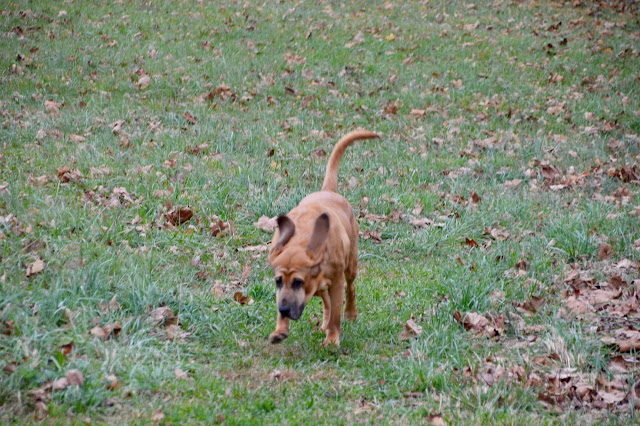 By the time coffee had been consumed, internet reading finished and my two pages of the tv schedule of college football games printed out ... it was time for the first and only walk of the day. It felt warmer then it looked when we first started the walk ... that would soon change. 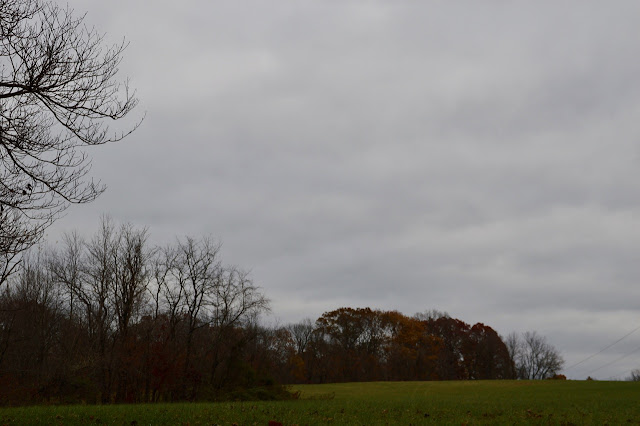 Of coarse the hounds never care about the temperatures. As long as they are walking in the field working their noses, they don't seem to care if it is grass they are walking on or snow. I am the only one that has to adjust what I wear. 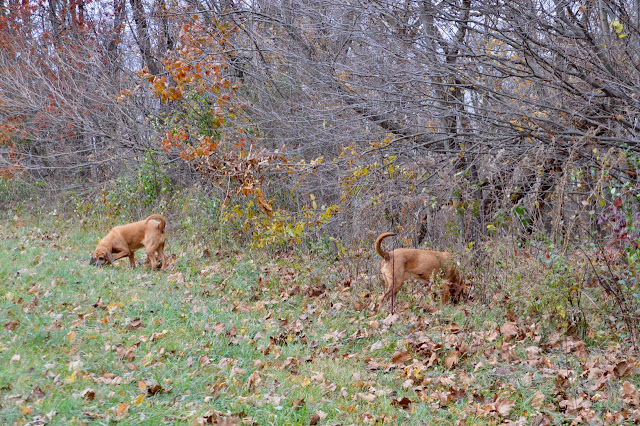 Without saying anything Stella kept up with Sadie and I but was still able to get her running in by hanging back at all of her familiar spots. 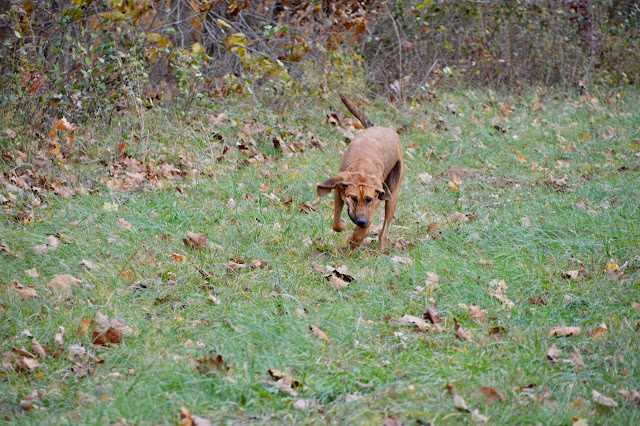 I mentioned Friday that Sadie likes chasing two things that fly ... birds and leaves. With the strong 15-20mph winds, the blowing leaves were driving her crazy. There were so many of them airborne she didn't know which one to choose so she would just stand there looking at them. 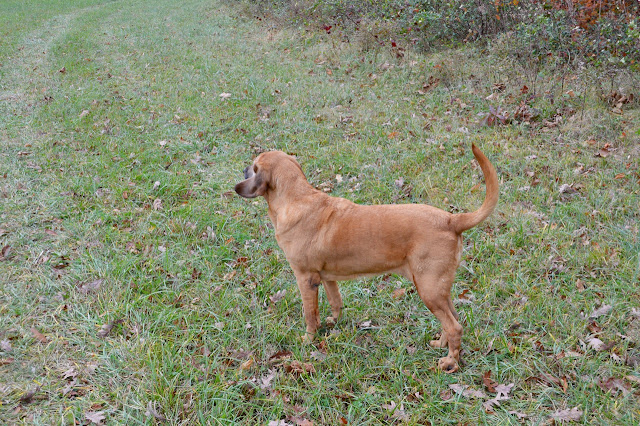 About the time we turned that first corner ... that 'warmth' we felt was blown away. What felt warmer was now freezing. Cold enough where I wished I had worn a pair of gloves along with a heavier coat besides the "all season" jacket I had on from Lands End. 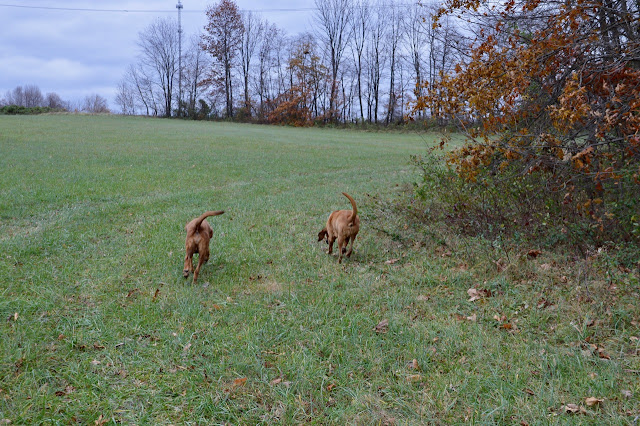 Sadie planted her nose to the ground and ever looked back and she tracked that worn deer path all the way to the far right corner. 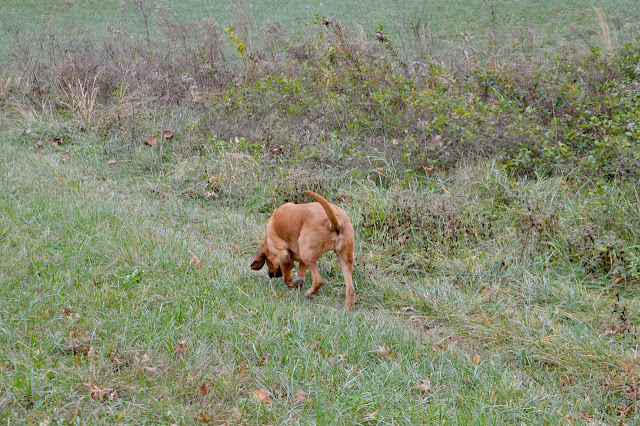 Stella stayed back for just a few minutes before she came running around me and headed to join Sadie. She never knows what Sadie might be getting instead of her. 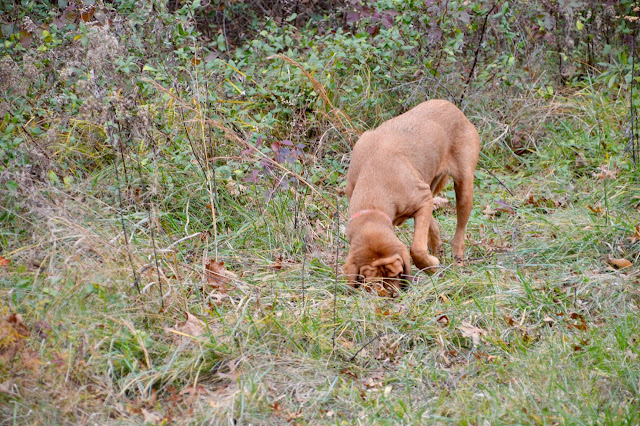 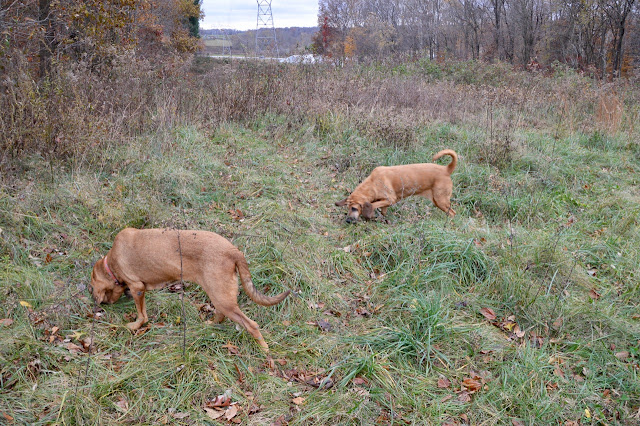 It surprised me that they both followed me as I made the left turn to follow the back edge of the field. 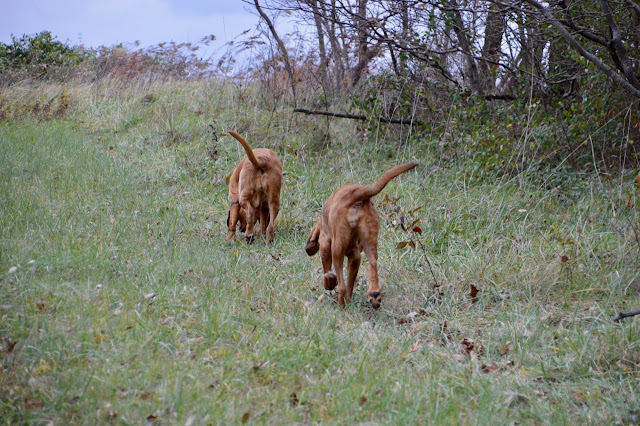 About the time I thought they were headed for the 'no-fly' zone, once again they turned and came running to follow me home. Were the colder temps making them a little more motivated today to get home? 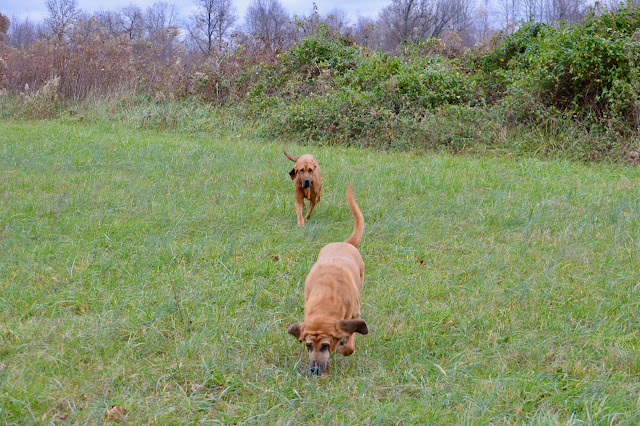 They stopped and waited for me to catch up to them I guess I wasn't moving fast enough. 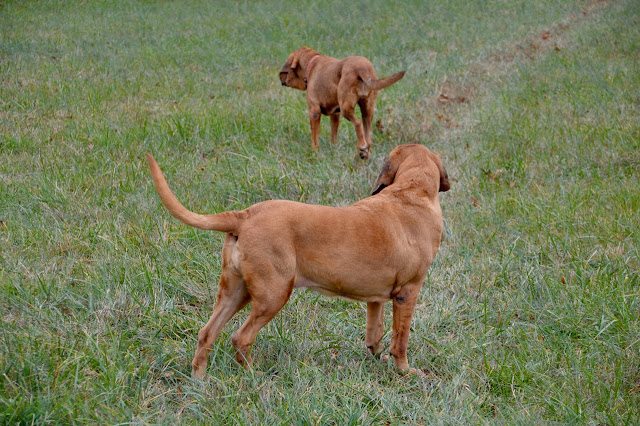 Later in the afternoon we came back outside after their lunch and before my first football game to watch. Neither one got much farther than this before they trotted back to the door to be let back inside. You can always tell how cold it is by how close they sleep together. Saturday afternoon they both settled on the couch next to each other and me to sleep during the games. 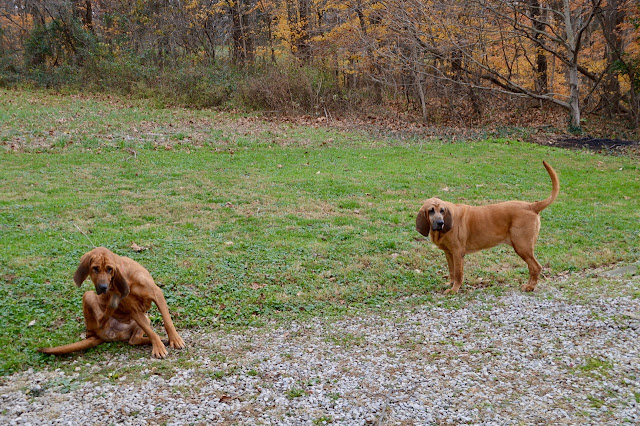 I would check the temperature on my iPhone during the games. It kept dropping. As I watched the IU / Michigan game, those snow flurries in Ann Arbor, MI turned to heavy snow by the end of the game 3+ hours later. Locally my temps were also dropping. All afternoon walks were canceled.

I was still in denial that winter was here. 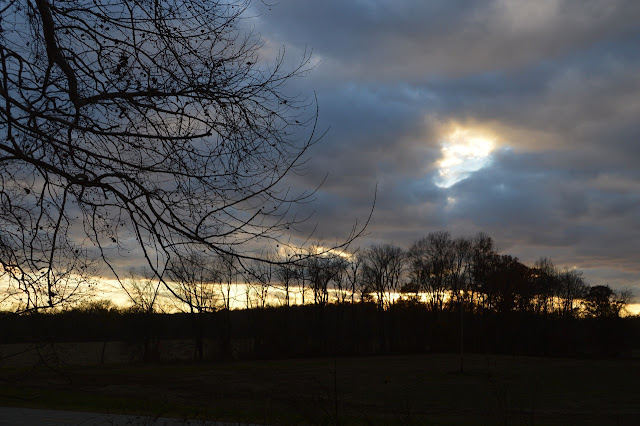 It was 26° this morning when we stepped outside. It's still early here so the first walk has not taken place yet. I also have just a little coffee to finish before I put on my Down Coat and gloves today, along with a ski cap to stay warm on the first walk.

Highs in the 50's are forecasted this next week ... I can live with that.

Cold and sunny this morning in 'the tropics' of southern Indiana.
at November 20, 2016
Email ThisBlogThis!Share to TwitterShare to FacebookShare to Pinterest
Labels: Cold Temps, Saturday Mornings