It Was a Great Afternoon

This is my 2nd post of the day. Basically I had so many pictures by the end of the day that I wanted to post, there were almost too many for just one post ... plus that first post was around mid-day. 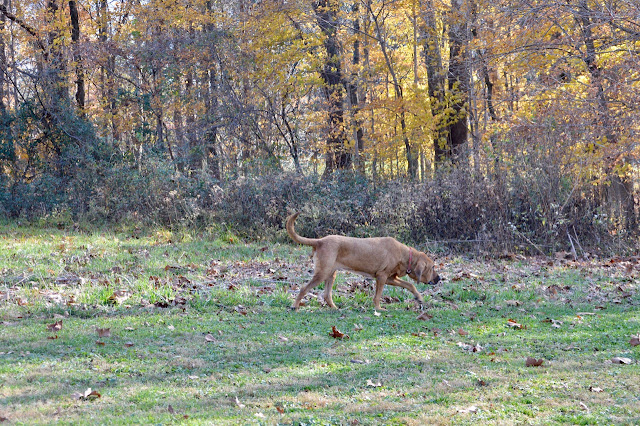 It was nice to see the gutters were full of DRY leaves and a dry gutter, so it was pretty easy to clean. I pulled all the leaves out from my ladder, then raking them up and burning them. The front and back of the house had less than a 32 gallon container of leaves. While I was on the roof, both hounds stayed in the field, never ran away.

I also got up on the roof and checked for any damage shingles, plus tightened some screws that hold the gutters to the soffit. It's a great view from the top of the roof.

It wasn't until I downloaded this next picture that I saw Sadie was standing on three legs with her left front paw off the hound. She was not in the middle of walk but standing. 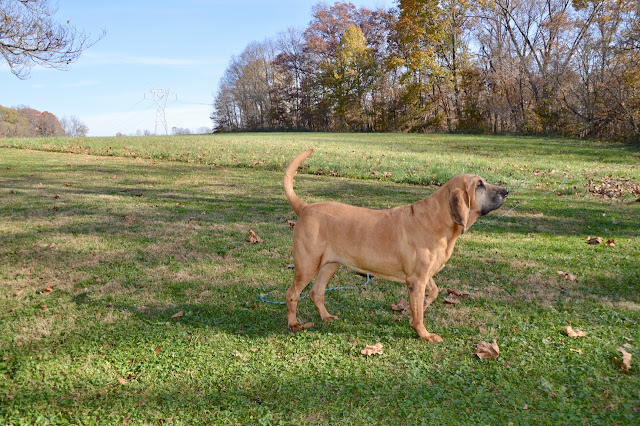 While the hounds took an early afternoon siesta, I put the top down on the Z4 and headed out through the farm lands, a 42 mile loop. As usual the I6 engine purrr'd like a kitten. 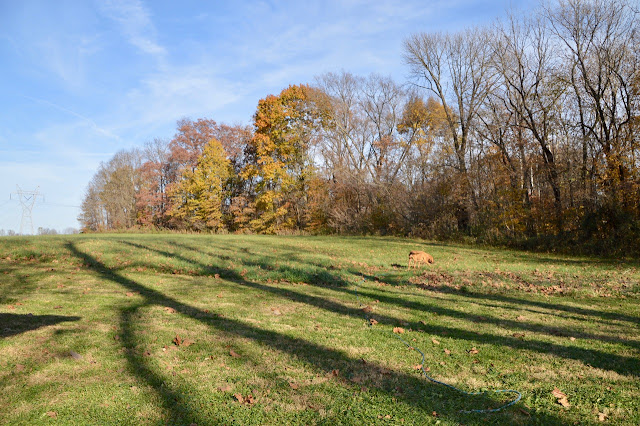 It wasn't long after returning home all of us moved outside. That is, except Heidi. She had gone outside earlier today and had no interest in joining us. As Stella slow sneaked off toward her new favorite area, Sadie gave her the stare down ... I could tell we were most likely taking off for our 3rd walk of the day even though it was only a little bit after 3pm. 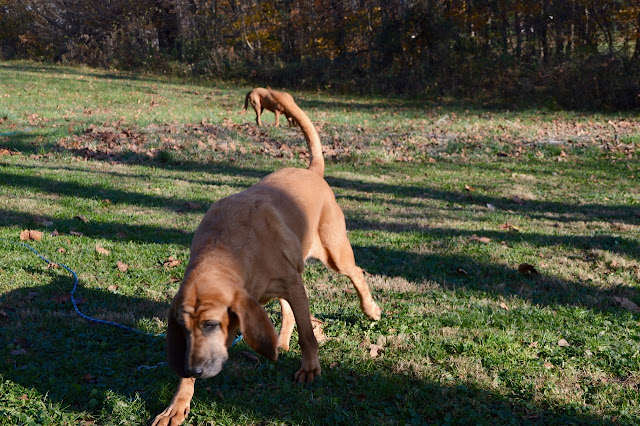 The burn pile of tree limbs is gone, completely burned and ready for a new stack that will be built up over the winter as more tree limbs fall during the snow and ice this winter. 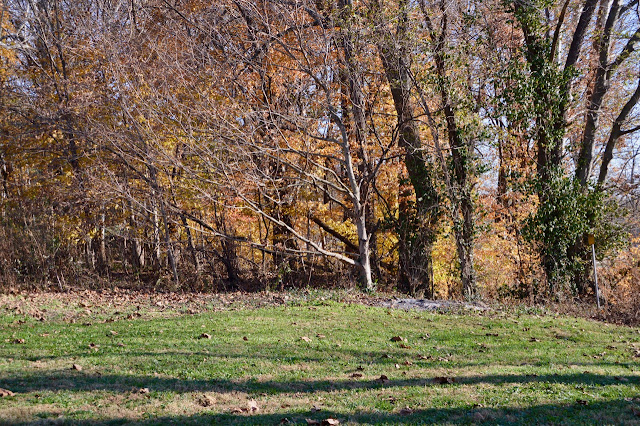 That dirt area will be seeded with grass next spring, so finally all of the thick brush, wild bushes etc are completely gone from that area under the trees. Even though I didn't do a professional job, the grass has grown in so well over two years, that section below the trees is the best part of the lawn, front and back. 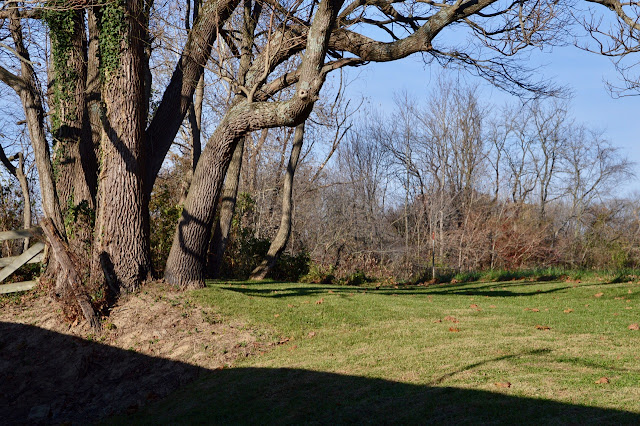 This is Stella's technique in "slowly" sneaking away. It's interesting that over time she comes up with different routines and different places she likes to go ... then out of nowhere, she will find somewhere else that interests her. Wasn't it just last summer she and Sadie always headed toward the neighbor's house. 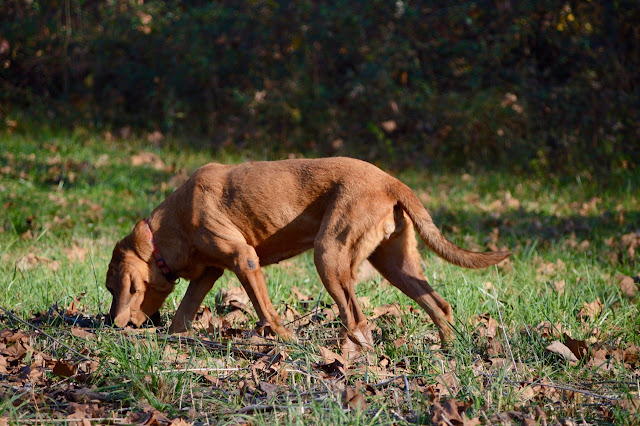 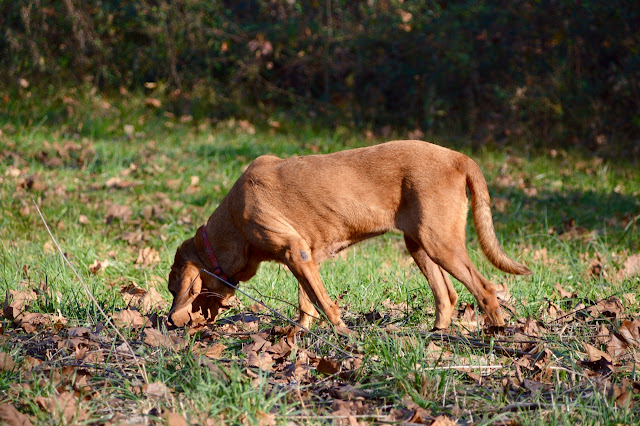 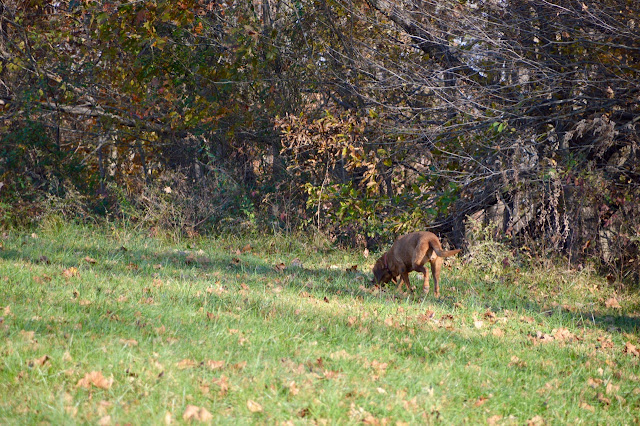 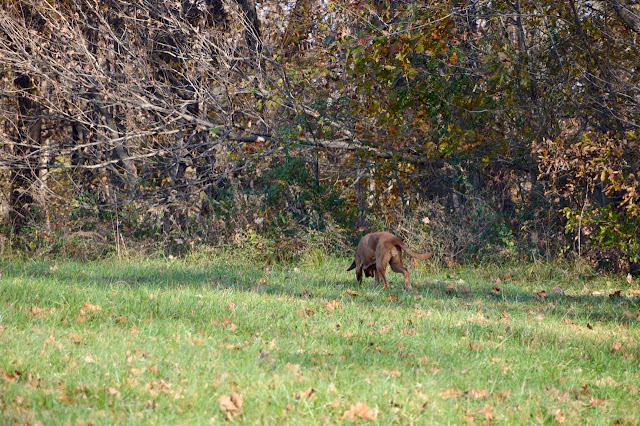 I was pretty sure when I took this next picture Stella was about to walk into the wooded area. She did and luckily walked back out to the field. 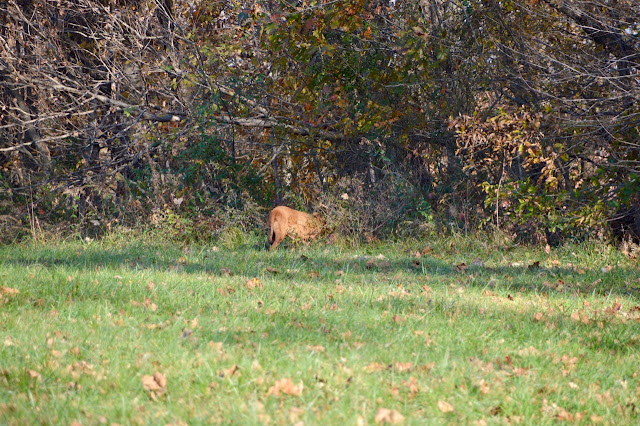 Sadie was very interested in what Stella was doing. Her curiosity got the best of here and she had to go see what Stella had found. 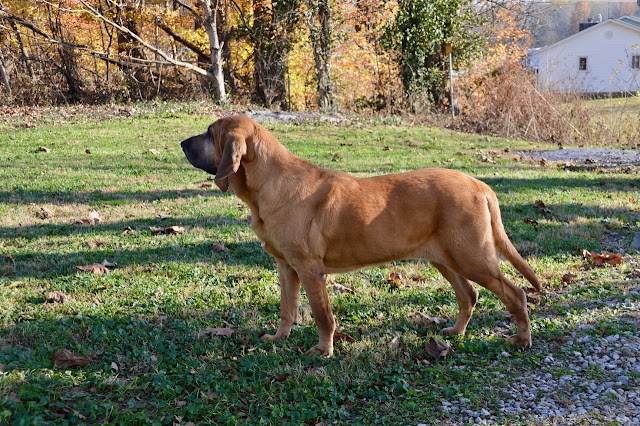 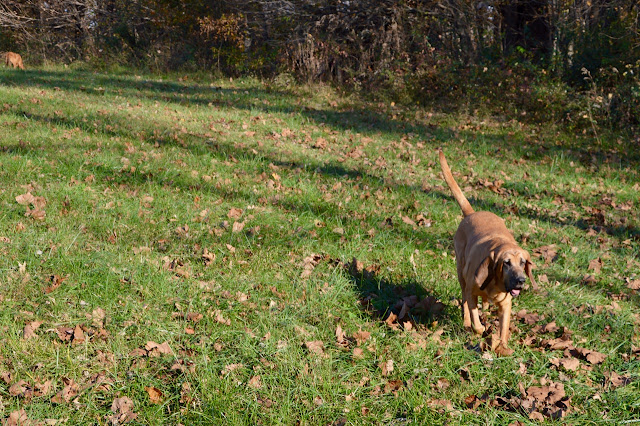 As I started to walk out with my camera in hand Sadie was pretty sure that meant we would be walking for the 3rd time today ... she just wanted to make sure she was thinking the same thing I was. 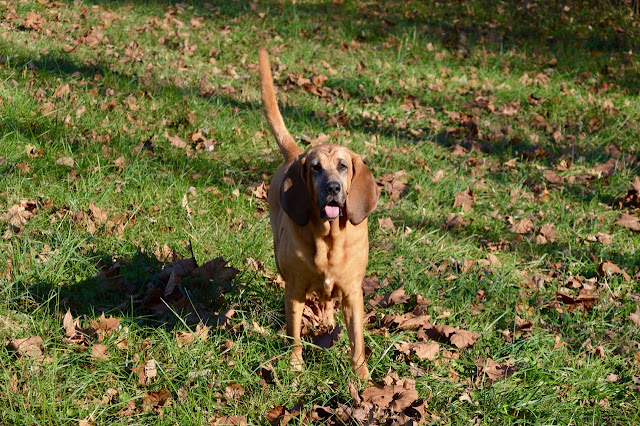 If I knew the hounds would never go down into the gully, next door to the neighbors, out into the highway or to the back of the field out of site ... I would let them stay outside as long as they wanted while I went back inside. But, I can't take that chance. It's better to be safe than sorry. 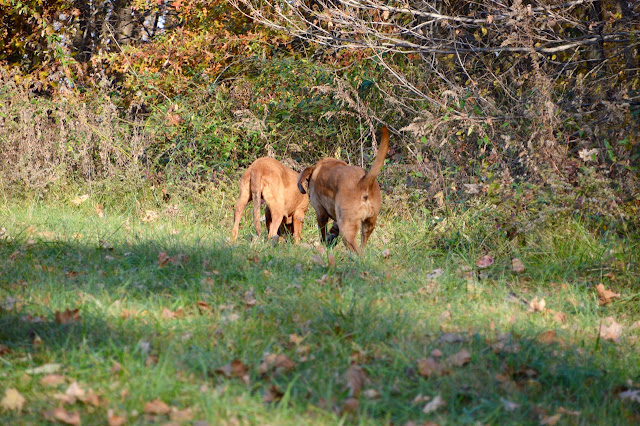 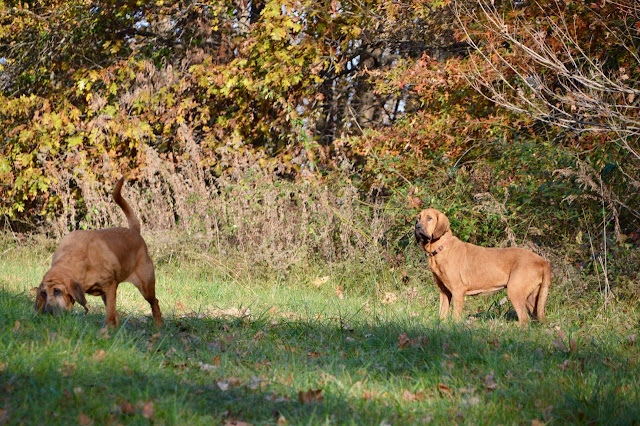 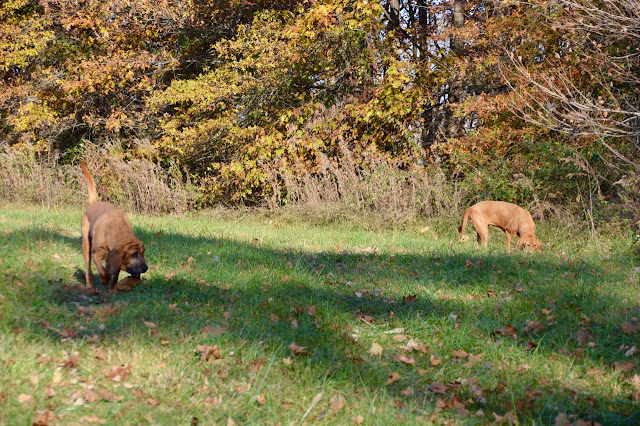 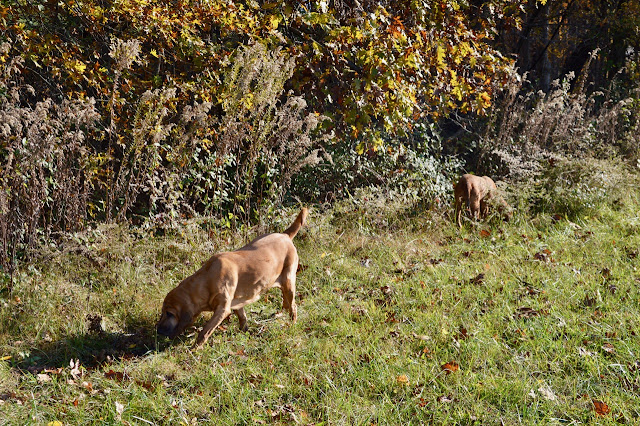 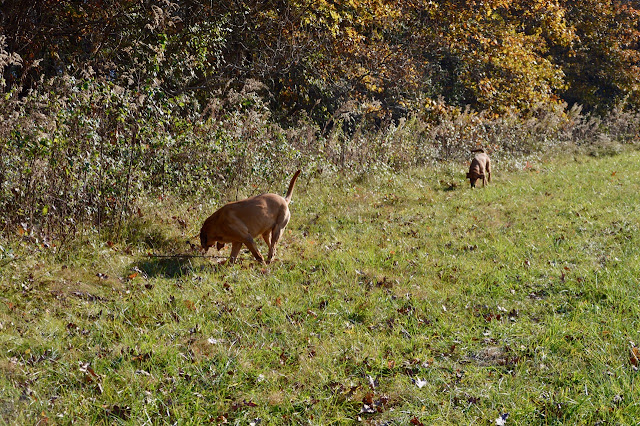 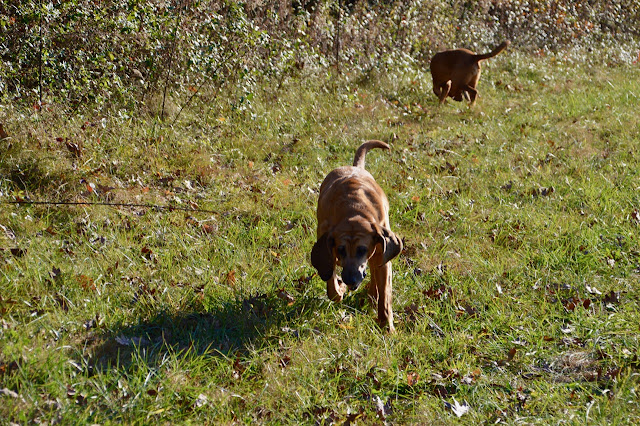 No sign of of Stella ... just about half way down or the center of the picture next to the brush line you can barely see her as she steps out. 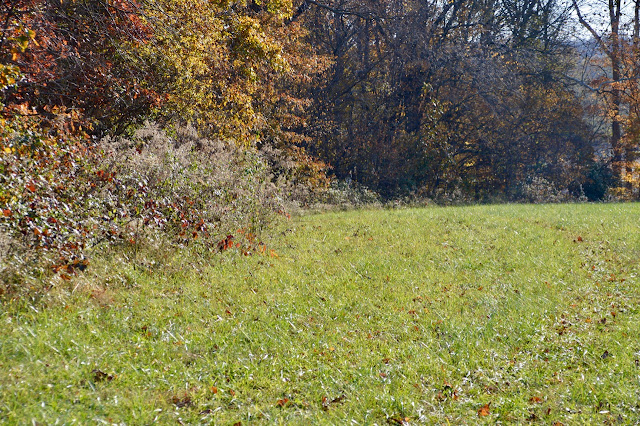 Just like that she came sprinting around me and headed to join Sadie. 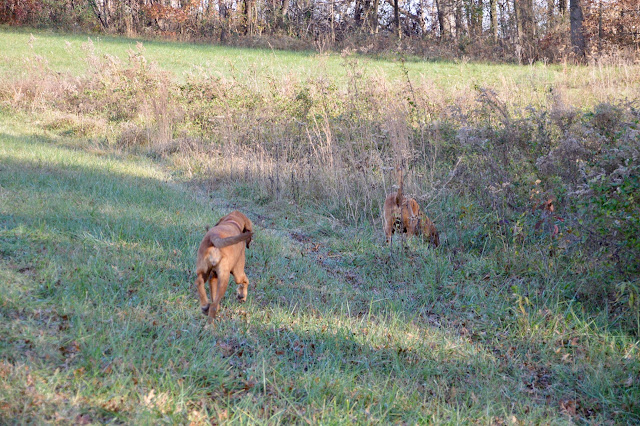 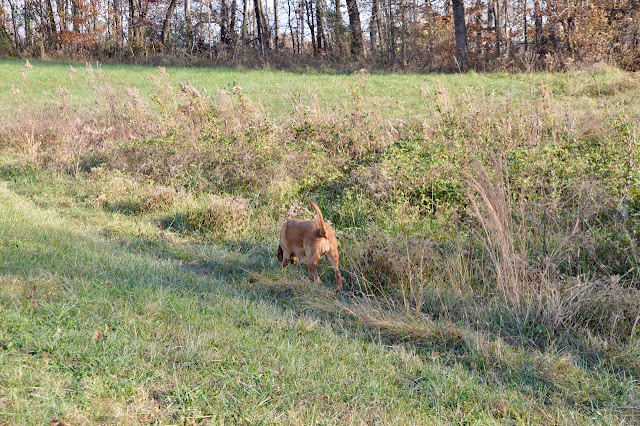 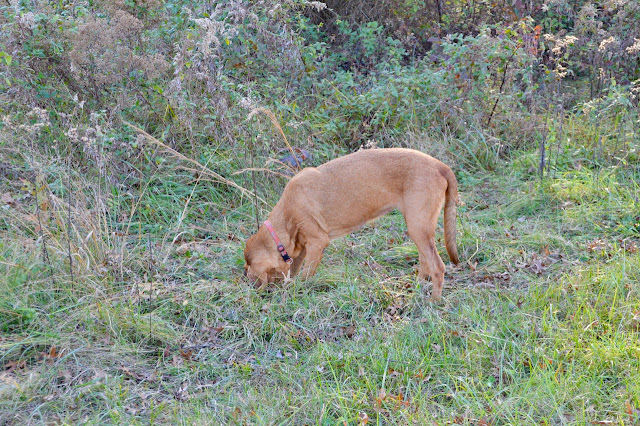 They love this area in the far right corner. As they should, there is a lot of signs of heavy deer traffic in this area. I let them stay as long as they wanted ... they eventually started walking toward me. 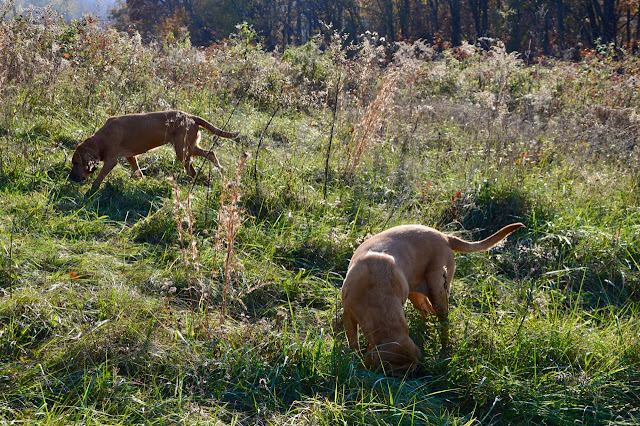 Here is a view of the field while I stand in the far right corner. 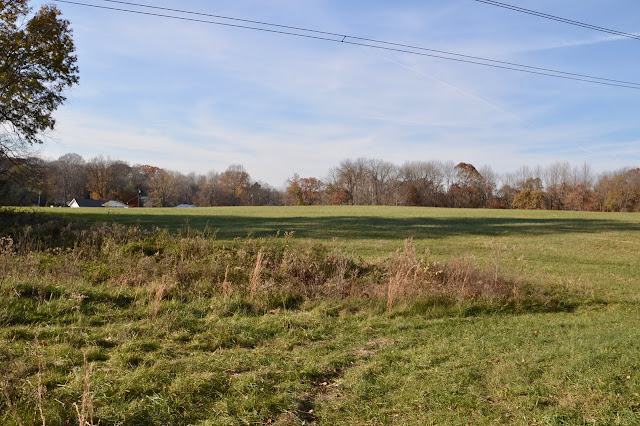 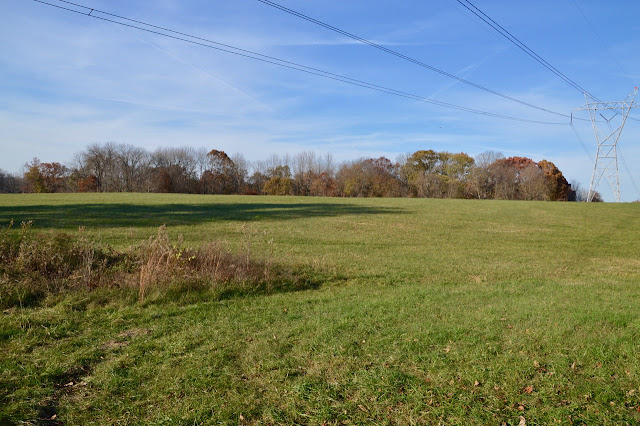 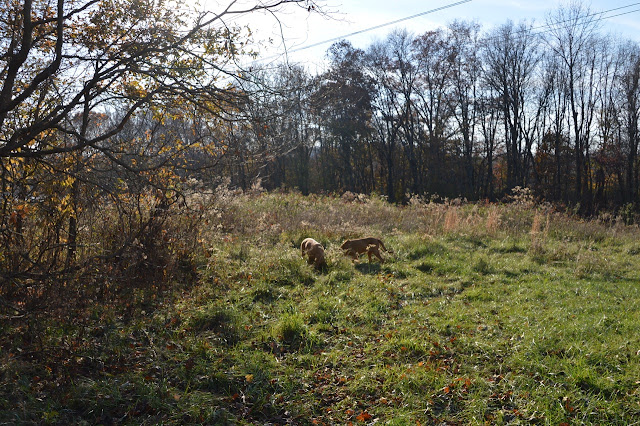 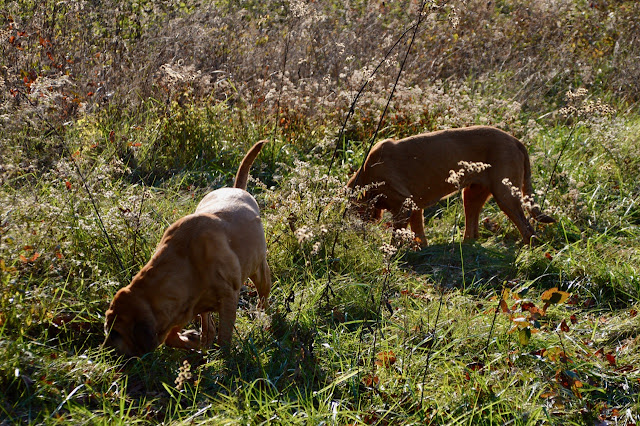 As we turned to head home, the sunshine was directly in our face and very bright. Too bright to take any pictures. Stella always looks like she is taking her last steps when she finds out she has to go inside. 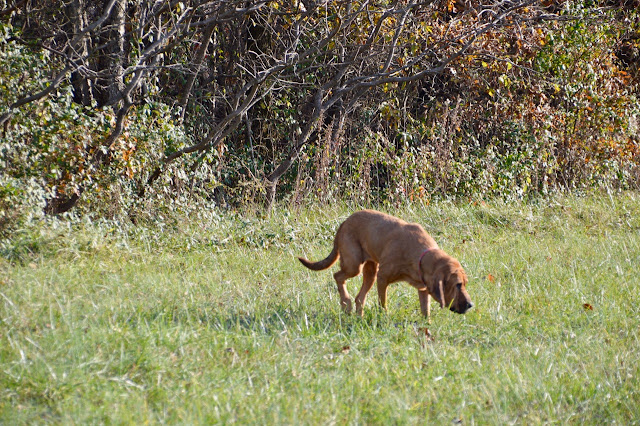 Going through my list of stuff I wanted to get done before the temps turn cold and its the same stuff I do every fall ... I believe the only thing I have left to do, is wash the outside of the windows. It will be another day in the 70's tomorrow so that sounds like a good window washing day.

I'll probably take advantage of the weather and take the Z4 out again. I have a few other highways to take down through the hills and trees of southern Indiana.

It's hard to believe that Thanksgiving is a week away and I am sitting here in 71° weather here in 'the tropics' of southern Indiana.
at November 17, 2016