It's HOT Outside So It's Lazy Inside

We went out early this morning and the humidity hit me immediately. High temps were expected again so I knew there would not be much going on outside today. There wouldn't be many photos taken. I still have some new photos but nothing out of the normal setting. As you can see, Winston is ready to start the day no matter how hot or muggy it is.


After a few days of Heidi showing improvement in her skin after Epsom Salts soak on Saturday, Heidi's skin flared back to redness late yesterday and she began to chew a lot. So instead of waiting for the weekend for her next bath, it happened this afternoon. Only 20 minutes in chest high warm water with Epsom Salts, rinsed off, towel dried and she was a happy basset hound again. She still thought it was too hot to go outside this afternoon after she was out early this morning and turned down the offer of taking her photo.


Besides Stella showing a little more of her personality and Sadie getting more use to another bloodhound in the house, somewhat of a "big test" was passed today. Stella came with a reputation of having some separation anxiety while left at home while the owner was at work. That is one reason they were looking for a new owner that may work at home or was home most of the time.

The normal routine when I leave is to put the hounds in the non-destructible bedroom, the closet doors baby gated to keep Sadie from getting to my shoes and the door shut. They have water available, the AC running, plus it's their normal place for sleeping at night. A lot of familiar smells for them to feel more relaxed.

So that was where Stella was going today when I had to go grocery shopping and prepare for tonights start of College Football 2015. She or they will be in there whenever I am away from the house. I will say that she didn't surprise me and passed the test with flying colors. After loading up on too many carbs, especially that "The Greek God Yogurt" that Ed is always talking about on his blog, we decided it was time for a nice siesta in preparation for watching a lot of college football tonight on tv.

Around 4:30 we decided to give it another shot outside. It is REALLY hot ... the leaves from the sycamore tree by the drive are being fried and dropping onto the drive like flies. As I was talking these photos of the scorched leaves, what do I see but that "infamous crabgrass coming back up through my gravel driveway. As expected.

Here are a few photos of those oven toasted leaves along with my favorite green stuff coming back up through my gravel driveway. 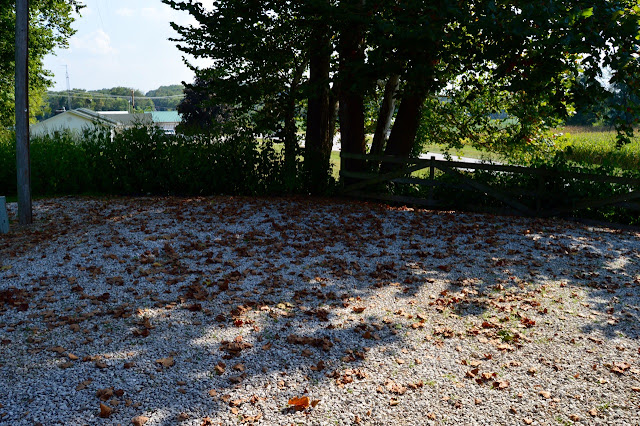 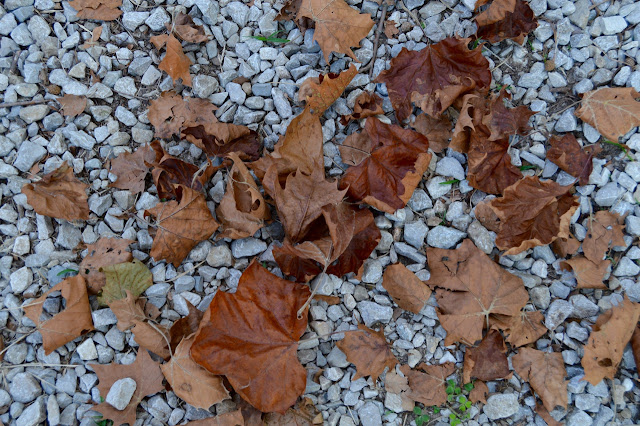 Not much else to write about so I'll leave you with some hound photos.


Late yesterday afternoon, some nice shade and 91° at the time. Check out that sitting position. 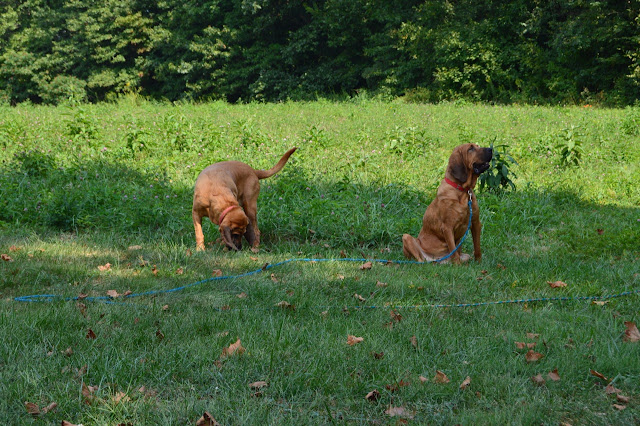 We were not out long this morning. Enough to sniff a little of the area, dump the tanks but soon after that the hounds headed towards the shade and warm concrete. 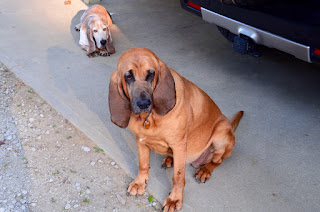 Typical August weather has arrived later than normal, no complaint here, it's been a great summer.


That's about all for today from "the tropics" of Southern Indiana.
at September 03, 2015
Email ThisBlogThis!Share to TwitterShare to FacebookShare to Pinterest
Labels: Baked Leaves, Heidi's Treatment, Sadie, Stella, Winston