Stella Continues To Expand Her Boundaries 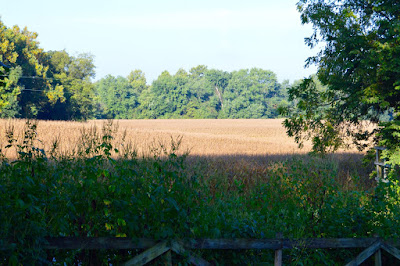 Although it's a beautiful day outside, I haven't accomplished much. You can do that when you are retired but at times it surprises me since I use to be called a "workaholic". In fact the photos I took are probably the only thing I will get done for the day, unless I rally before the NFL game tonight and get some dishes washed.

A dog walk is definitely on the schedule later today. The recent heat wave that baked the leaves off the trees, increased the process of corn and beans coming close to becoming ready for harvesting.

I wanted to try something different today by using the 75-200mm lens on all the photos. I normally only use it if the hounds are out in the field some distance away but today I wanted to shoot it when the hounds were close to the house. The results were different of course but it is a result that I liked.

Winston and Sadie started the day like all others ... sniffing their yard for anything new. Stella stood and watched, not sure if she wanted to get her feet wet from the heavy dew this morning. 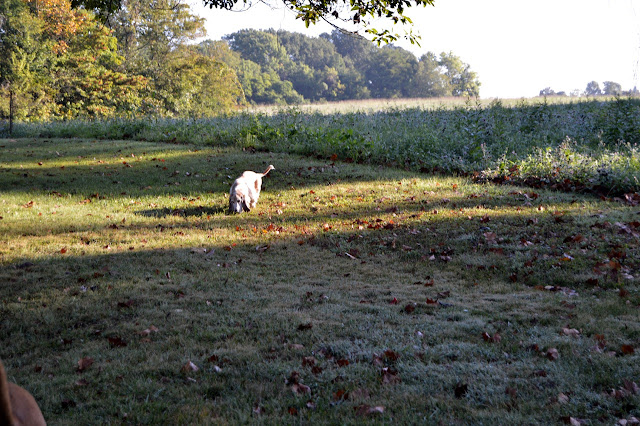 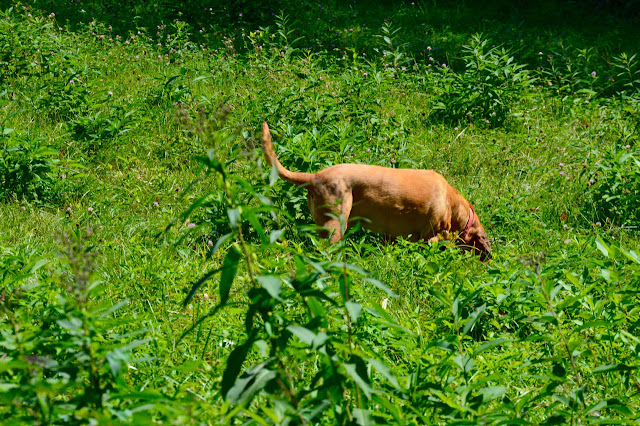 Stella continues to expand her territory and personality by the hour. Yesterday she played with Sadie for the first time. This afternoon when they came back inside, they touched noses and starting playing and running inside the house. Luckily they stopped on their own soon after and were asleep after their sudden burst of energy.

She also checked out the front part of her territory, looking in the direction of the highway. Not for long as I called her name and she immediately turned around and headed in the reverse direction. All the other hounds were glancing that direction probably wondering what she was doing as they too are not allowed any further than that corner of the house. 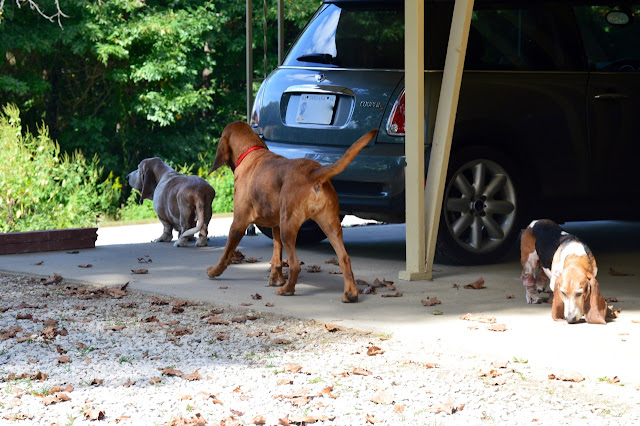 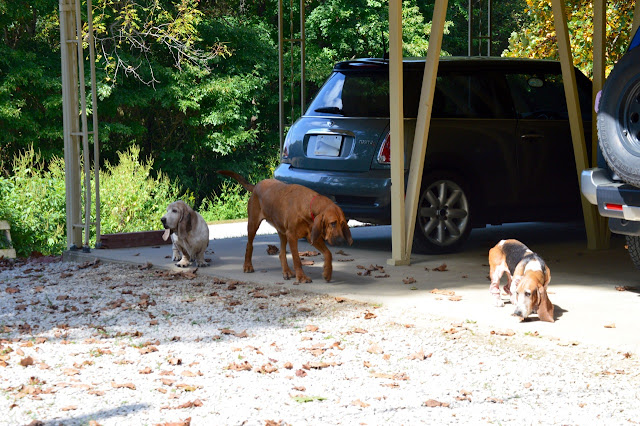 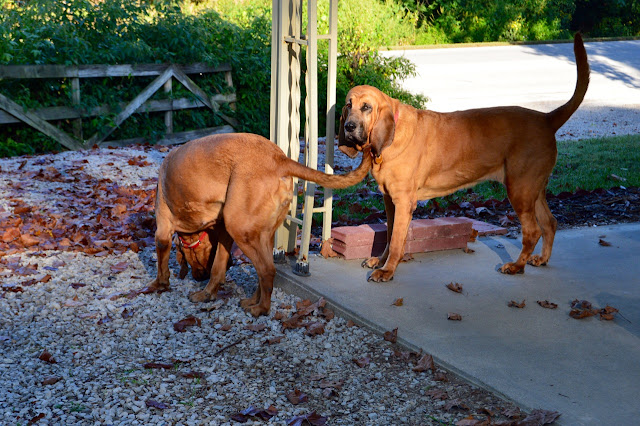 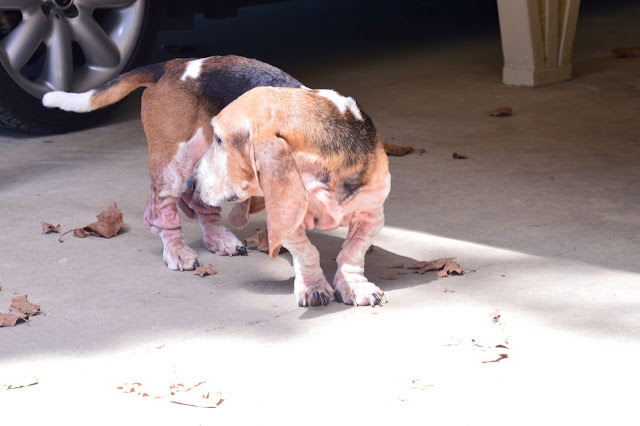 Late yesterday after Sadie had brought out her "big" bone to chew, she stepped away to get some water and at that time Stella decided she would check it out herself. She liked it so much that she laid down, held the bone with her paws and was chewing on it when Sadie returned. 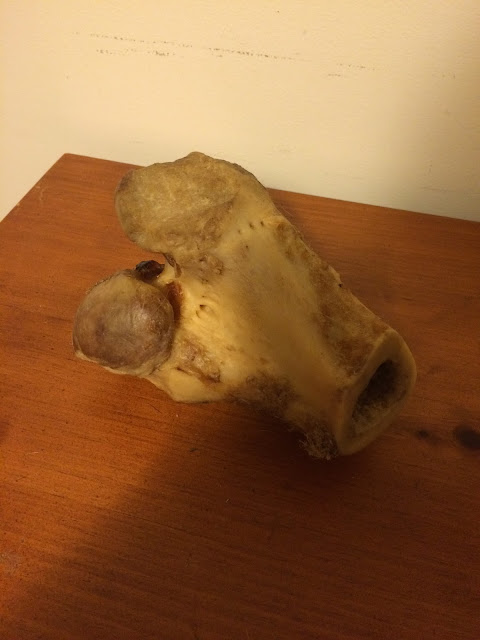 There wasn't any kind of fighting or growling. Sadie slowly passed her giving her the eye and laid in her normal spot under the coffee table. Today the same thing. Each time I tried to get a photo of them playing or chewing the large bone ... they both stopped. This photo was about the only one I could get. It was also taken with the 75-200mm lens. She lifted her head when she heard the beep of my auto focus ... I have turned that off for future photos. 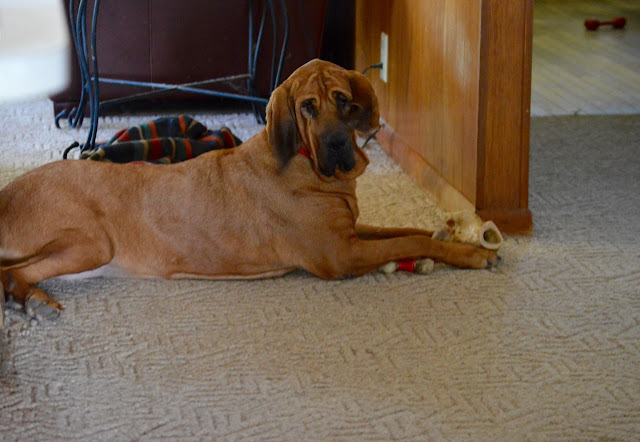 I really like how Stella has merged into the pack of hounds without any issues. It's been an unexpected smooth transition. I was expecting at least one period of disagreement.

I don't know about you but I think that Heidi's skin is improving. For those readers looking at her for the first time, it probably looks pretty bad, but believe me when I say that her skin has improved a lot. I am continuing with the Epsom Salt soaks. I am also logging into a spreadsheet her condition, rating her skin 1-5 with 5 being the worse and the kind of food, any treats or shampoos. 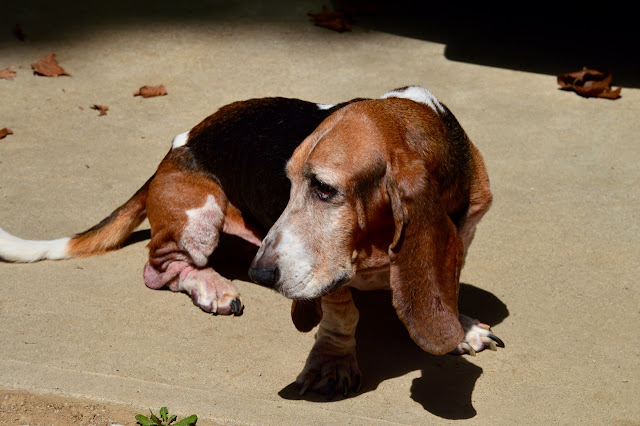 Her rear shoulder was raw a few months ago and the vet told me that hair would never grow back in that area. You can see the white hair still making it's attempt to come back. All of the skin that is hairless is soft compared to hard and crusty before.

With the temperatures dropping almost 10-15 degrees I am wondering if the temps that were in the 90's played a factor in her outbreak last week with redness and some hot spots? Hopefully the lower temperatures will mean improving skin.

I can't believe it's already Thursday. Yet being retired I am rarely aware of what day of the week it is. That will change with the NFL and College Football starting their games on tv every Thursday night. I'll know the days from those scheduled games.

With the recent merger of AT&T and DirecTv, I am getting bombarded with offers by mail to come back to AT&T plus more discounts added since I was and am a DirecTv customer before the merger. They keep getting higher in their offers ... today was $500 in credits, and double the data per month and something I had not seen before with data plans ... unused data would be carried forward.

I took a close look at that since AT&T now has 4G service in my area, which they didn't have when I changed to Verizon in June 2014. When I played around with their different plans, my monthly fee would still be $120 more per year for what I have now. Also I would have to pay Verizon a fee for breaking my contract 10 months early. I estimate that would be around $150 added to the cost. I still might have to go back and take a closer look at that.

It makes you wonder just how much companies over charge you and get away with it, when they can offer you a $500 credit. Just last month when I told DirecTV I was thinking of taking the cheaper option and flipping to DishNetwork, they gave me a $20 per month discount for 12 months plus I had to extend my contract only 2 months longer than it was for to begin with.

I wouldn't have switched because I had already check out the sports channels with different packages and the cost for me would have been close to the same. Still another company giving a $240 credit just for talking to them.

I need to call more I guess.

Here is something a little different to end this post. Here is a photo of the weather prediction for this winter by the National Weather Service. El Nino is the factor this winter for weather. I have stated previously, I am not sure I want to tent camp this winter in the SW with them getting more rain than normal, just to stay warmer. I know it doesn't rain much normally in that area but from all I read they will be getting a lot of rain. Rain is rain if you know what I mean. 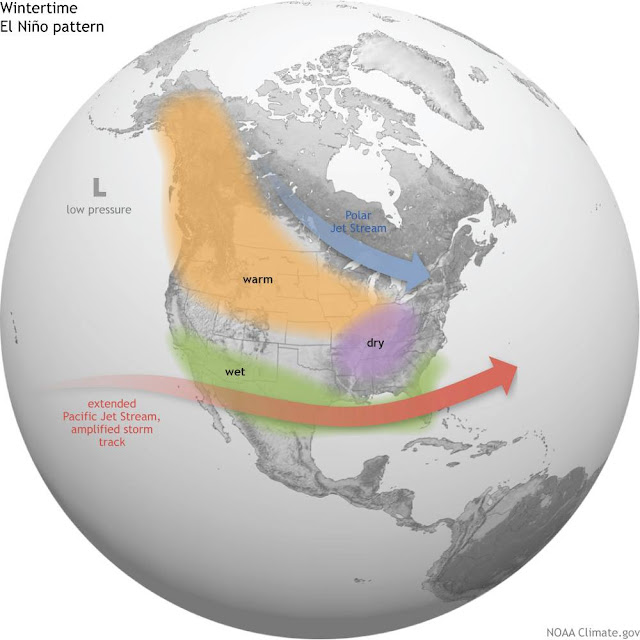 I am not sure why my profile photo is not showing up when I make comments on other blogs and reply to comments on my blog. I have removed and added the same photo on my profile but no change. Any ideas??

It's another great day here in "the tropics" ... I need to get ready for the daily dog walk, we are hoping that Heidi joins us this afternoon.
at September 10, 2015
Email ThisBlogThis!Share to TwitterShare to FacebookShare to Pinterest
Labels: AT&T, DirecTv, El Nino, Heidi, Sadie, Stella, Stella's New Boundaries, Winston