Hounds and Other Stuff

It's been a pretty slow day here in "the tropics". We are down to one day to go with the days in the 90's. It is suppose to drop to the low 80's until Saturday and a freezing 72° after some forecast of rain. I'll take it. I love hot weather but low 80's is better than mid 90's when there isn't a beach around.

Some readers have emailed asking if Heidi is okay since she has very few photos posted compared to the other hounds. Heidi is doing great and is slowly improving. She is gaining some weight back after losing 28% of her 46# this past year. She has hair that continues to grow back in areas the vet did not expect due to the skin damage. I know that red skin looks terrible and sore but it's soft to the touch and doesn't seem to bother her. 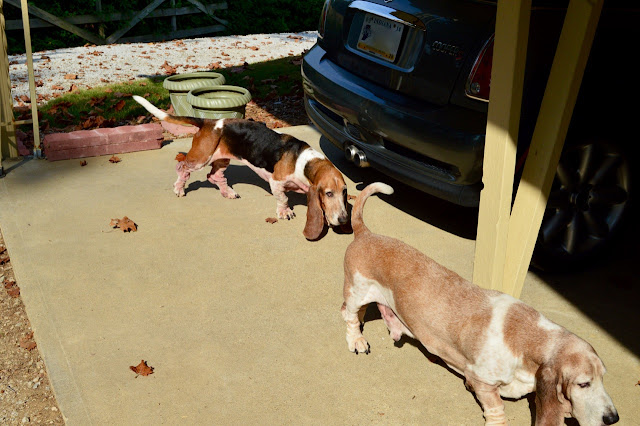 The thing is she is a 'couch potato' ... always has been. She will roll and bark at herself, she will run sprints in the house when she first comes back inside in the mornings ... as long as the other hounds are still outside. She sleeps a lot like most bassets do. Plus I think a lot of her energy has been zapped by whatever is going on with her. She will go on the daily walks when she wants to, which isn't often anymore. About the only time she goes outside is to do this: 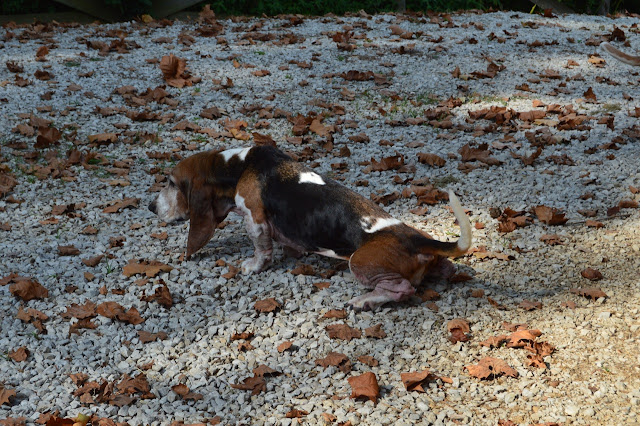 I think you will see her coat is looking really good after eating Earthborn Holistic dog food the past 52 days. I can also feel some muscle along her spine coming back and I am seeing a little less of her ribs. So I believe she is gaining some weight.  The skin looks good one day and all it takes is for her to start chewing again for it to look the way it did this morning. Overall, believe it or not, the majority of her skin issues are healing.

I am tracking on a spreadsheet everything that is going on with her, adding things that might be the cause of her skin issues. It's really hard to tell what the factors are that irritate her skin. I still think most of it is caused by the environment from the pollen and dust in the air.

Stella is still doing great off the leash. This morning was a real test as we were all outside before the sun came up and she took off for the field faster than normal. I thought there might be another animal out there she had to chase but found out she was just in a hurry to dump her tanks. Still it was dark enough that you could not see any of the hounds without a flashlight and she came running when I called her name. She continues to be a great bloodhound. 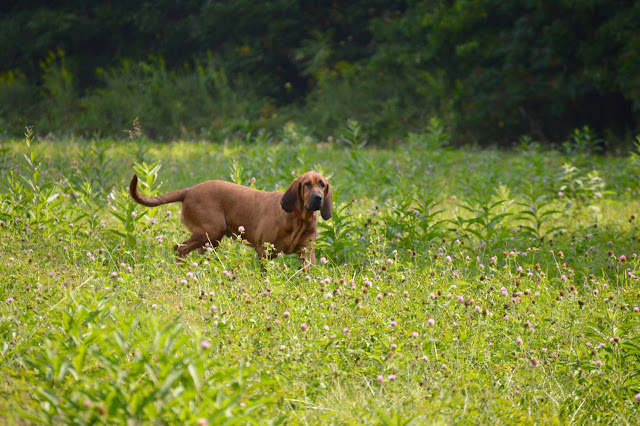 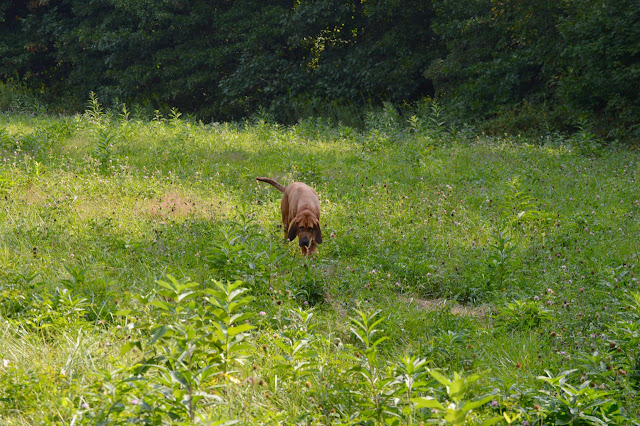 Winston and Sadie made sure to know what had been walking around their yard while they were inside last night. Their noses seem to work overtime. By the way, Sadie is now spending time sleeping next to Stella different times during the day. Stella is also becoming a little jealous when it comes to attention and will nose her way into the lead if possible. She seems to have taken over the couch. 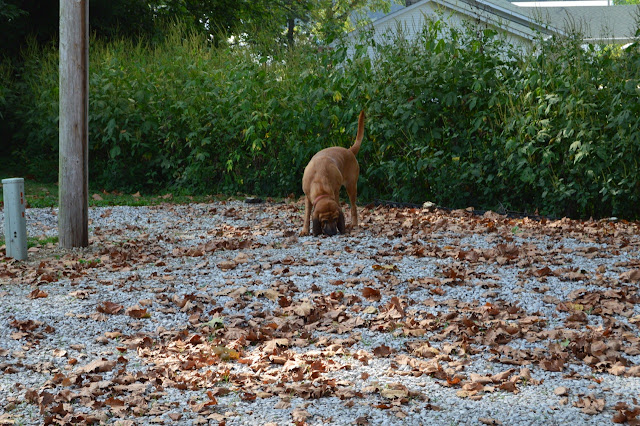 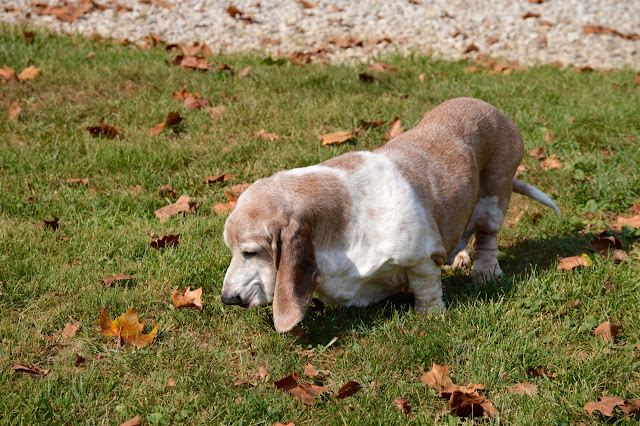 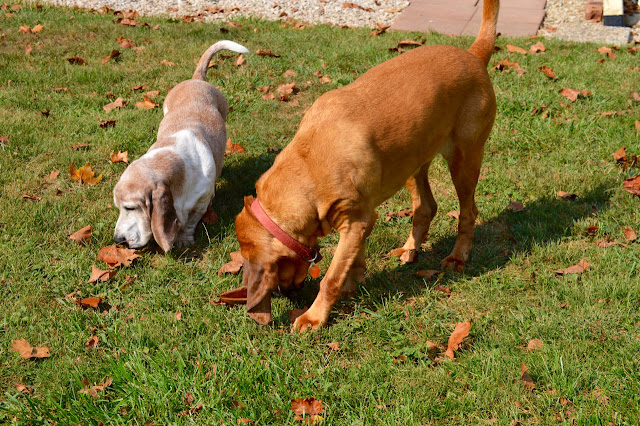 I think I read the pet food and pet toys industry is more than a $350 million per year industry. I've spent more than my share on kong balls, deer antler bones, cloth bones, pig ears, hard marrow bones and bones from the local butcher at the grocery store that is no longer in business .... yet ... Sadie spent more time and had more fun licking out the very last drop of peanut butter from the Jif Peanut Butter jar her last night. 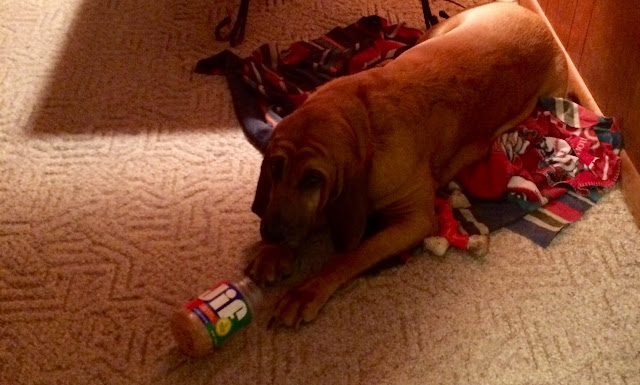 She was determined enough at the end to slide that jar as far back into her mouth as possible so her tongue would reach the bottom of the jar. She still couldn't get all the peanut butter out but she had fun. Amazing isn't what hounds like to do or any dogs for that matter, with things that don't cost a lot? 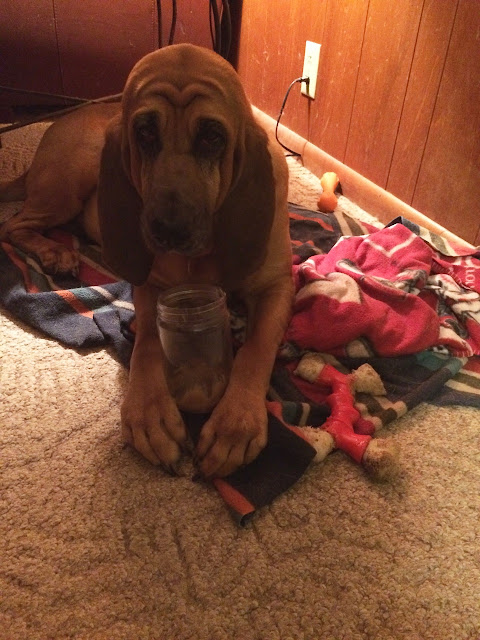 Since I had a little time this morning to mess around on the internet and do different computer stuff I dabbled with Google+ again, looked at, downloaded and then deleted Picasa, and read about Wordpress blogs compared to Blogger.

First about the blogs.

I was able to find some pretty honest opinions from the blogging geeks and even though they were set up on the Wordpress platform, the majority of them said Blogger was the way to go for what I am doing. I would prefer not to move my blog. Blogger has unlimited storage for texts and photos, etc. Wordpress of course has a lot more templates, a more professional look but a limited amount of storage on their free version. If I would want to go to their .com and furnish my own server for it to reside on, then no problems. Been there done that.

I don't know why since I am on Facebook where I follow a lot of groups, keep in touch with some old friends and post just a few photos of the hounds ... for some reason this morning I thought of activating my old Google+ account again. I did some research to see if there were any new updates or changes, clicked all the buttons I need to set up the account.

After spending a few hours adding photographs, looking for communities, trying to set privacy settings I decided it was just more work than I wanted to add to my computer time. This blog and Facebook are enough. I didn't see any reason to have duplication between the three platforms and Picasa is not my main photo manager. So I deactivated the Google+ about as fast as I set it up. I know that the new Google Photos has unlimited storage but I have all my photos in the Apple Photos program that is on my hard drive and it's backed up every hour on an external hard drive.

Since all the photos on this blog are stored in Google's Picasa, I wanted to see how much data I had used, and how much was left. I never liked it when I looked before because it always wanted to download the 22,000 photos I have on my hard drive, before I could input just what folders I wanted it to download. I was curious enough to look at it again.

This is that type of morning I have at times where I mess around with computer stuff. The college football game tonight starts at 8pm so I have plenty of time to do nothing today. Plus it was giving me something to do between the numerous trips outside with the hounds. It's one of those days with them. They want outside but as soon as they get outside, it's too hot so they want back inside. At least I am getting a workout today, thanks to them.

Anyway I couldn't find anywhere to log into Picasa with my blog info from Google+ so I did the same thing I have done in the past with the same results. Isn't that the definition of insanity?

I downloaded the Picasa program and as soon as it was downloaded it started importing all my 22,000 photographs automatically!! There might even be more photos than that because my Photos file is 25Gb and many years old. So I immediately canceled Picasa and trashed it. Then emptied the trash.

I already put a lot of my photos on Flickr, I use Photos to edit all my photos and can use the Nikon camera editing system if I really want to get technical in photo editing.

So basically the morning was wasted doing things on the computer that I did not end up keeping. Here are a couple of photos I took this morning. These white flowers are blooming all over the field. 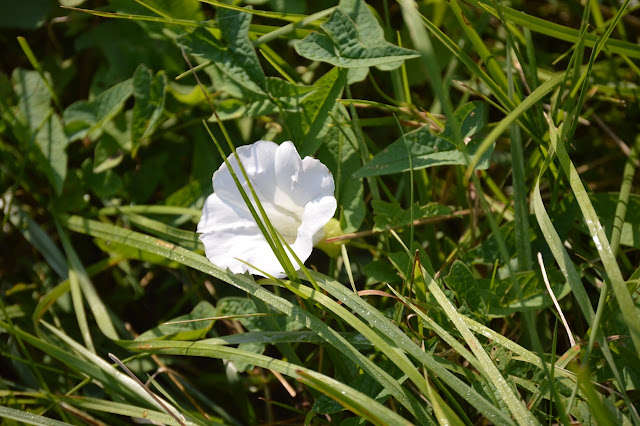 A few weeks ago I blogged about killing all the wasps that were in that AT&T phone terminal box for the neighborhood. I had also gotten rid of a couple of nests earlier in the summer when I washed the house siding. Well those wasps are back with vengeance. I need more spray where I can attack them from 20'-30' away. The war with them continues. 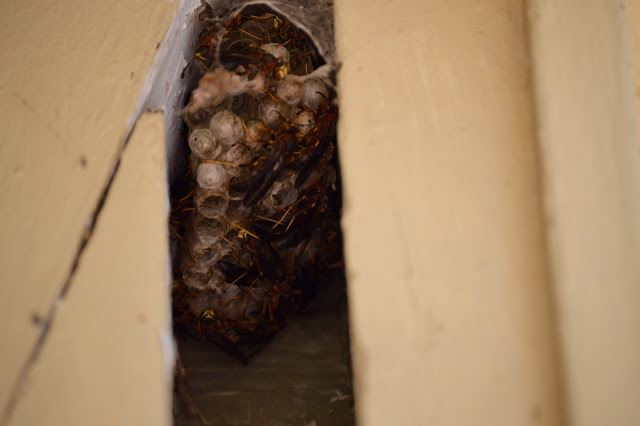 Where were the hounds through all of this?? Their normal activity .... sleeping!!

Not much going on, that's about all today from "the tropics" of Southern Indiana.
at September 07, 2015