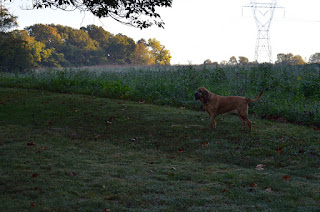 First of all before I get started writing about the hounds, I have to say I experienced great Exede Satellite Internet Service (ViaSat) .. customer service again. In the past 15 months I haven't called them that much but the few times I have, every time they provide something extra. The other day I told you since I was at my monthly data limit, speeds would slow except I would get the high speed between Midnight - 5am.

It was after midnight and my speeds didn't increase. You forget how different the modern day speeds are on your internet connection until you are churning less than one megabit per second. The lady on the other side of the phone saw that my connection was "congested" even at 12:35am, but if it continued the next day I was to call before 9pm so I could talk to the technical reps.

In the meantime she gave me a free Gb of data so I could check it out during those prime hours of 8am-9pm. By yesterday morning I was back to speeds of 12-15Mbps. I will also say to those readers that may find this information by searching, I've rarely had any downtime even during the worst of thunderstorms. When I did, those downtime periods were less than one hour, not days. Exede Satellite is good internet service. It's too bad they are not in the mobile market.

A short blip for the camera readers ... I am at one week with ZERO issues after I did the firmware update and a lens software update on the Nikon D3200 site.

Now on to the hounds.

It's not only Stella that is amazing me and I must admit she has sent me off the charts with surprises ... all good ones. It's the other three hounds that have had a little disruption to their routines, at times couch space, shared bones, shared water ... they have adapted like all hounds do, no matter the breed. While Stella has gotten more comfortable in her new home, the hounds have also become more comfortable with their new housemate.


Heidi knows that Stella can touch her nose without feeling intimidated and can nap next to each other. Winston knows he now shares his couch space at night and can use Stella as his pillow and vice versa. Sadie knows that "her" water is also Stella's water, as well as her bones. She also knows she can play and run as hard as she wants with Stella. They practically do everything together now, even walking near each other on the daily walk.

Stella has not been here a month yet. The first month will be completed on the 30th of September. She is only on the leash during our daily walk. She knows her new name and responds to "no". She also has her favorite spot in the backyard in the sun to nap.

Stella is just as good as her previous owner told me she was ... if not better.

Heidi's skin continues to improve, although she is not gaining her weight back. She will eat non stop if I would supply that much food. Once again she went outside once the sun was up, every time the other hounds did. The big news ... she wanted to lead the pack on the daily walk yesterday. That is a sure sign she is feeling better. Her coat has never been better since changing to the Earthborn Holistic Dog Food. 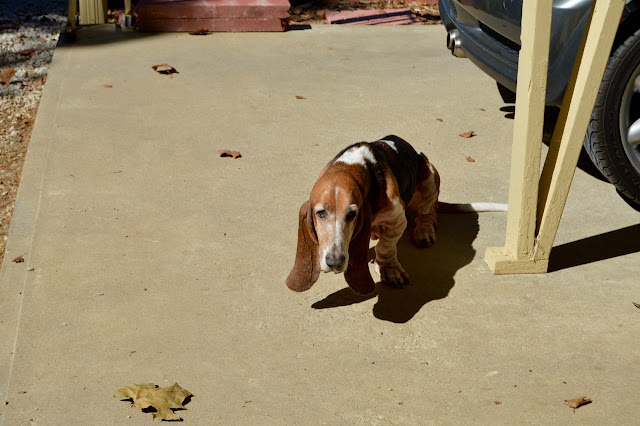 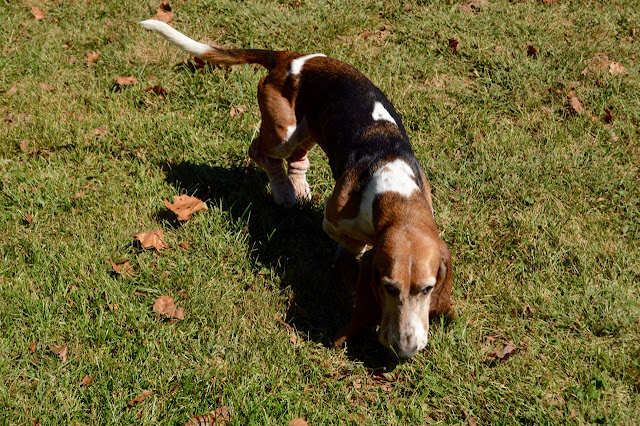 Winston was testing me yesterday with his stubbornness. He was finding things to eat in the field yesterday, that's never a good thing and he would ignore me when I told him to stop multiple times. After the long walk yesterday where he goes at a speed that is slower than slow, he decided to wander off after I took off his leash/collar. He never left the backyard but decided he wasn't coming inside until HE was ready. He also refused to face the camera during the photo shoots. 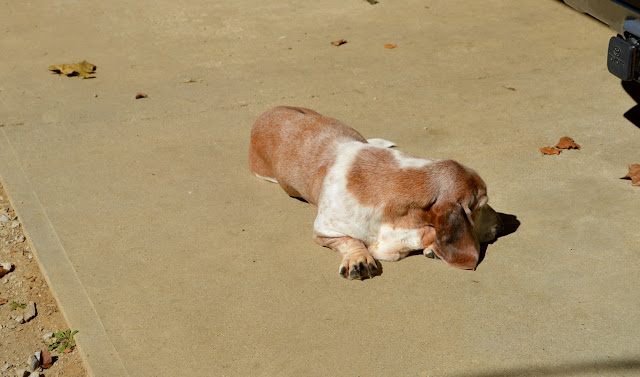 Sadie is the same daily ... no changes. Her and Stella played hard, did some sprints, sat together inside next to the same bone and shared the dog bed in the corner for their afternoon siesta.


They started the day by checking our 'their' yard in the morning. 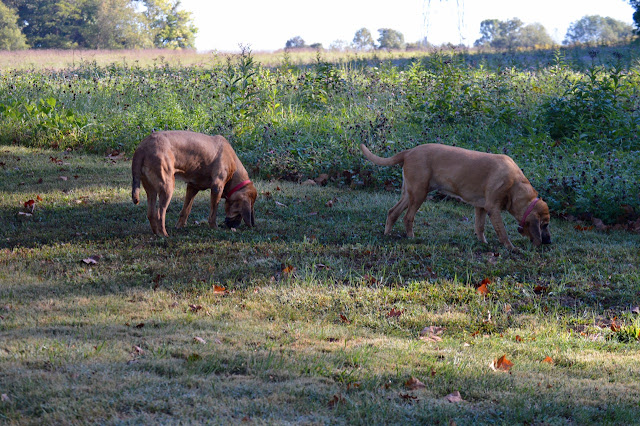 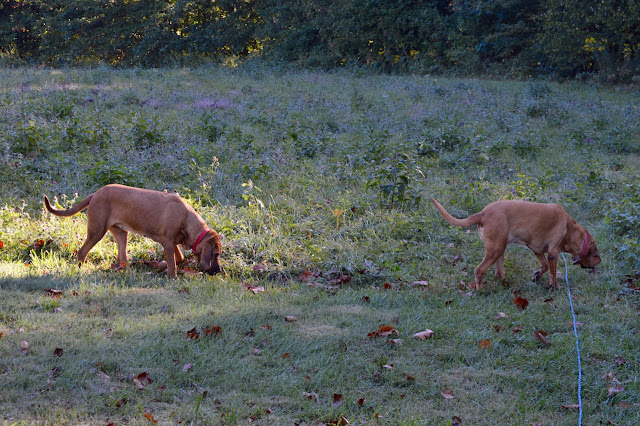 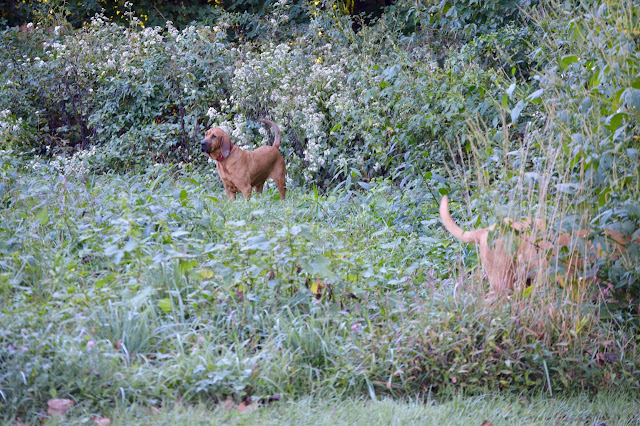 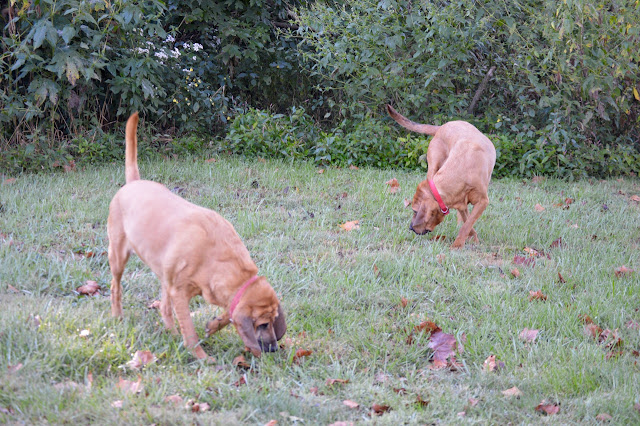 When we went out after their lunch, they failed to see the 5-7 deer lined up along the edge of the field by the woods. By the time I quietly hooked up Stella to the tether just in case she would see them and take off, picked up my camera, they were all gone back into the woods. Needless to say later in the day when we walked by the area I had seen them ... all four hounds were going crazy tracking the deer scents.

The deer I spotted from the house were at the edge of the woods and field, just to the right of that corner. Just inside that wooded area it drops dramatically into a deep deep gully.


One of our trips outside in the late afternoon before the daily walk, Sadie was in the mood to play. I am pretty sure she likes her new friend as she has not been this active since she was a puppy 7 years ago. 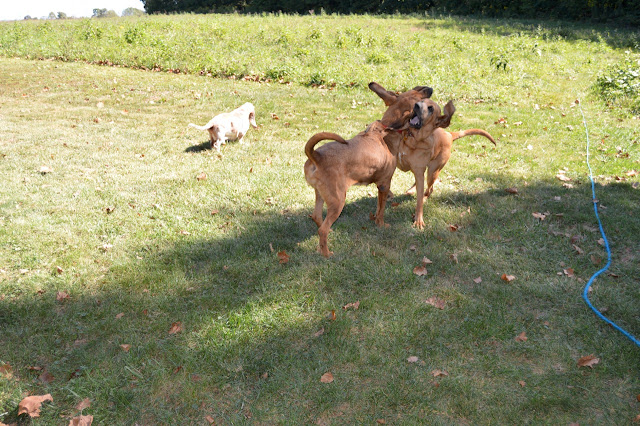 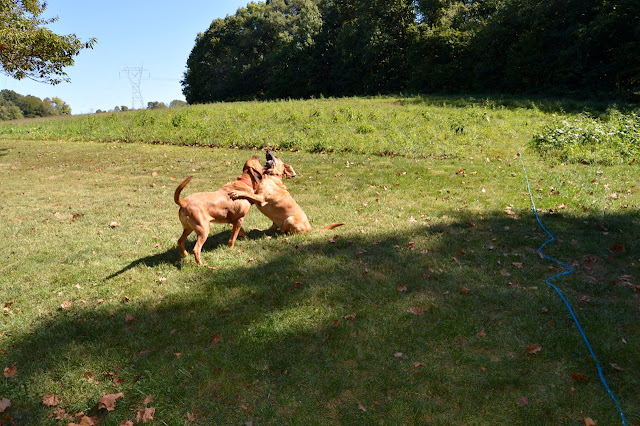 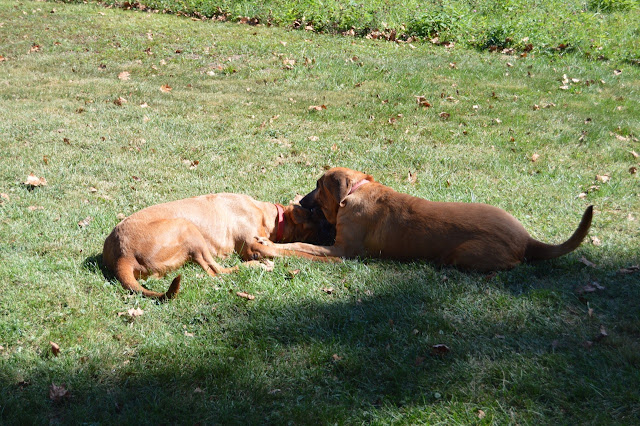 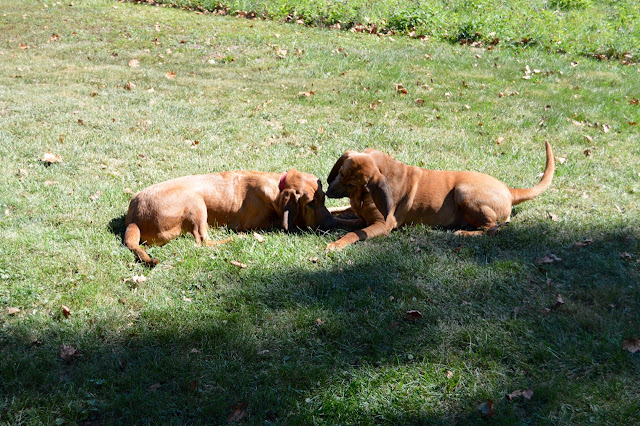 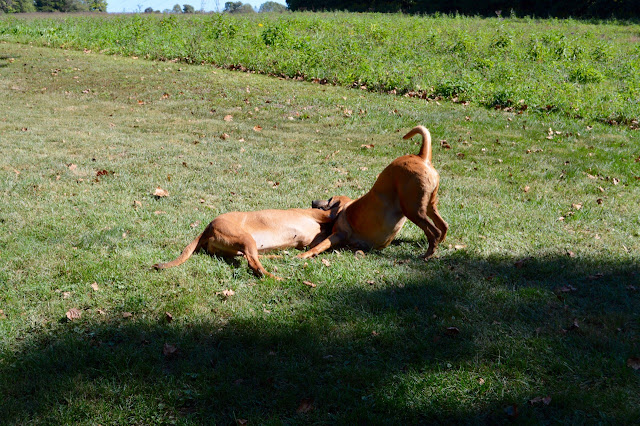 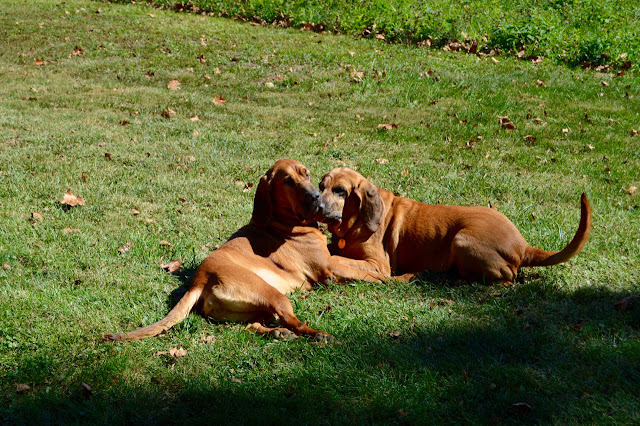 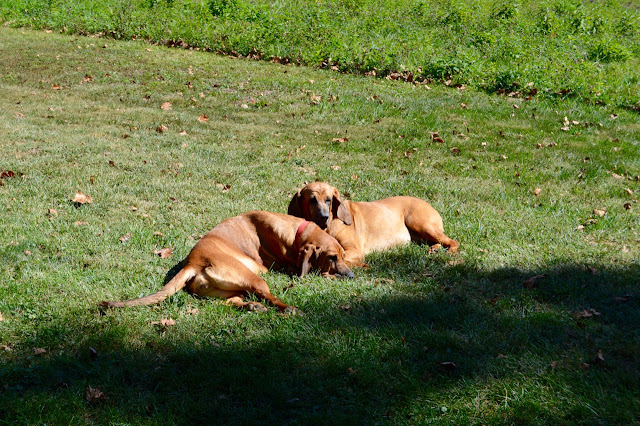