I'll admit right off the bat ... I don't feel guilty ... when the majority of my days in retirement find me doing absolutely nothing. The only thing I accomplished today was cleaning my Bunn coffee maker. I read the websites I normally read in the morning, looked up some stuff I had questions about online ... then turned off the internet to play about 3 hours of Mahjong Deluxe.

That program has 4 different groups of games and each group has approximately 40 games. My goal from the time I bought it was to play and complete all of them under 4 minutes. I have only a few left where it took me a little over 4 minutes to complete the game. I justify it joking that it keeps my eye and hand coordination in shape.

Then in the afternoons the hounds hang out usually sleeping after they are fed around 1:30pm. It's so quite you could hear a pin drop inside my house ... with two bloodhounds and two basset hounds ... it's hard for a few friends to imagine that is even possible. 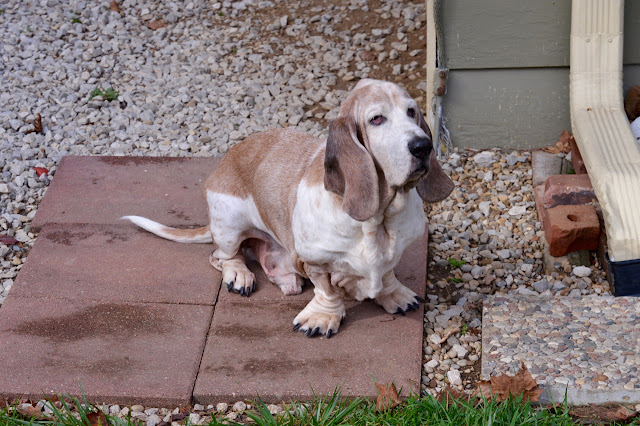 By late afternoon if it is not raining nor muddy from a recent rain ... we head off into the field for a daily dog walk. Today Stella walked the first half of the trip off leash. I only leashed her coming back because in the past she would go out the full 25' away from me on the retractable leash numerous times.

She has done very well spending time off the leash. In fact it's been weeks since I even tethered her. She will come when called and today stopped immediately when I yelled "no" as she and Sadie were sprinting in the backyard and were headed around the north side of the house. No doubt they would have made a lap around the house but backyard only is the rule. Except for Heidi and she has kinda claimed the front yard as hers. 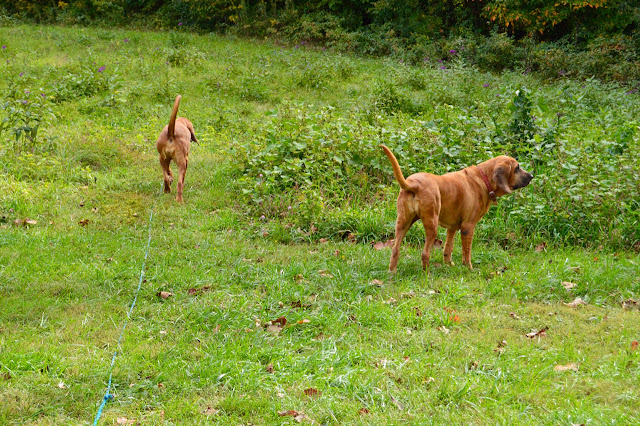 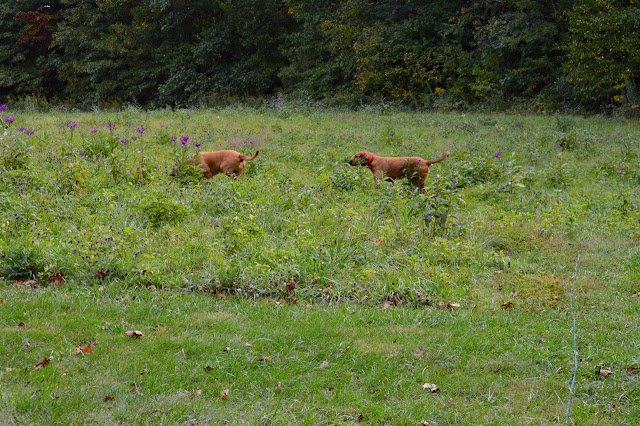 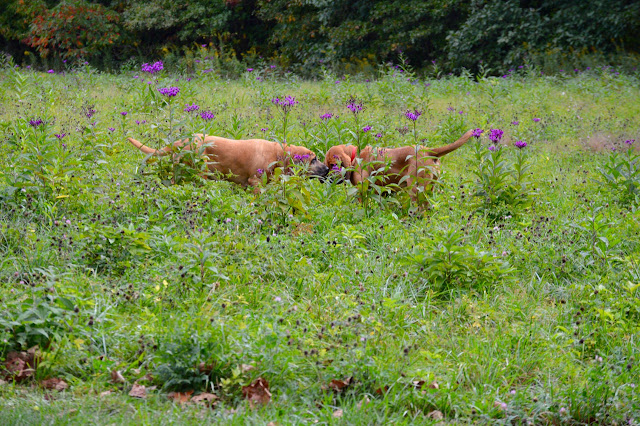 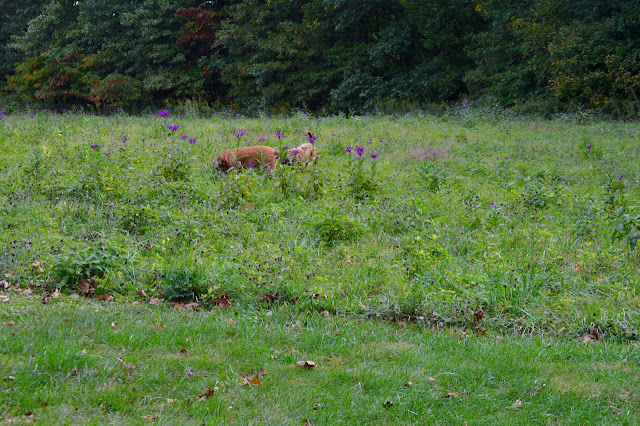 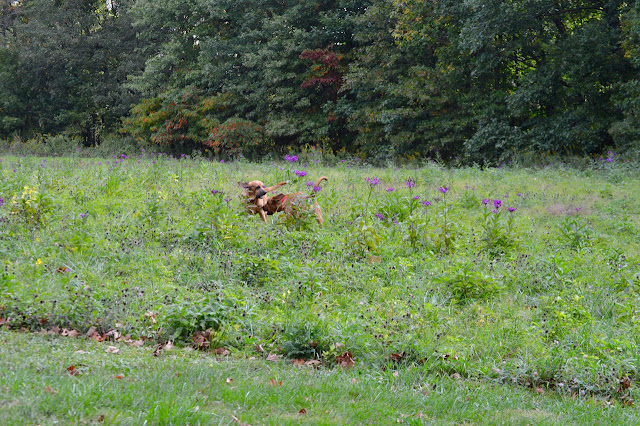 Back to my day though. Compared to days last April when I was burning and clearing some land to plant grass and clearing the bank along the drive ... it would seem I would be pretty bored doing nothing. Even compared to the days in June to mid-July where I was taking care of most of my "to do" list, I was really busy. Still I am not bored and every day seems to move fast. I've never had a retirement day that crawled like they did at work sometimes.

In fact after retiring 17 months ago I've gone from being a workaholic to a slacker. I'm beginning to think I was born to be a slacker. I like that pace. On many days the most I get done is reading a book and there are a few days where the biggest activity is feeding the hounds.

No, I don't feel guilty about doing absolutely nothing on a daily basis. 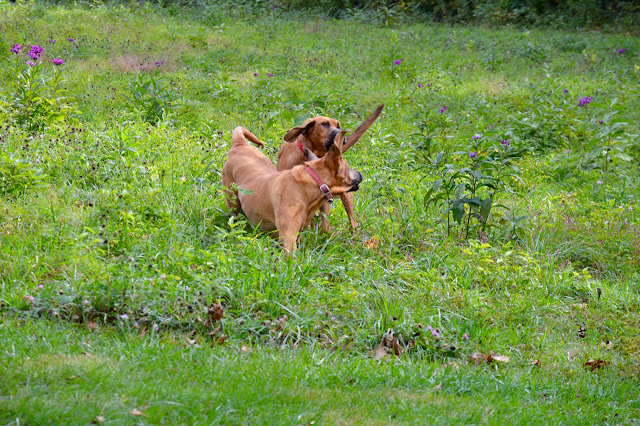 As far as feeding the hounds ... no problems with the 4th hound. Each have their own bowl put in the same spot of the room every day and the bowls are set down in the same order ... a habit I guess.

Since Heidi eats at a normal speed, I have to stand in front of her while she eats to keep the other three hounds of getting her food. They don't hesitate if there is any chance to get to her bowl, even with me watching them. It must be good food for them to want to eat nonstop.

I will keep adding her new probiotics for the next year. Based on the recommended dose, that is how long it will last. I will say she continues to have her good and bad days. About the time her skin is looking really good and you think she has turned the corner ... I'll look at her later in the day and she will have a flare up of red skin with some bare raw spots.

It's during these times I remember my vet telling me last February that 97% of dog allergies are NOT food related. He also feels that all the different kinds of dog foods are nothing more than a marketing ploy to make the most profit possible for the dog food companies. He does not sell any kind of dog food in his office and is pretty honest in voicing his opinions on the different dog food.

Don't think he is recommending Ol' Roy for dog food but food that has no corn, soy or wheat. He thinks the only hounds that should be on a no grain food are those with food related allergies.

I logged it into her spreadsheet but when they were picking corn the other day I had all the windows open in the house to enjoy the temperatures that were in the low 70's. My cars and house were NOT coated with the residue that was in the air but you would have to think there were enough particles in the air based on how it looked as the combine mowed through the corn field.

I think airborne particles like that affect Heidi's current allergy problems. It's not the only cause but one of them. Much like pollen in the air.

I attempted to cut one of Sadie's toenails last night as she slept in the chair. I was quiet, I moved slowly and about the time she felt that clipper touch that toenail she went vertical from her horizontal sleeping position. I guess you can tell I only got one of her toenails cut ... it looks like it might take 9 more days/or nights to get all ten cut ... unless she starts sleeping with one eye open. I must admit by her looks, she is somewhat leery now of taking a nap.

If I just toss the nail clippers onto the floor for her to see them ... she takes off sprinting. 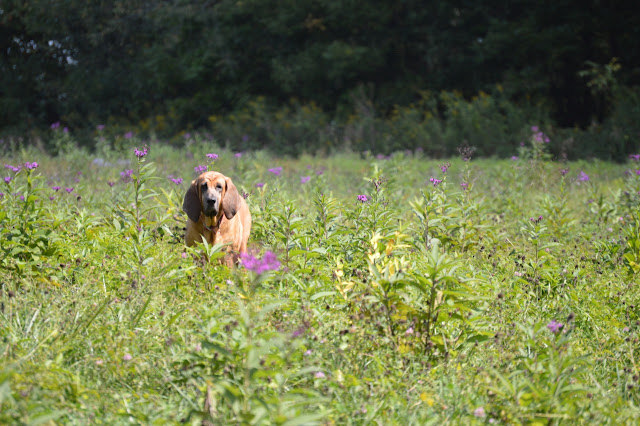 About the time I think fall is arriving early because the lows are now getting into the 40's and the highs the next week or so will be in the high 60's. ... I realize it's already October 1st tomorrow. That is so hard to believe for me because it just seems like I was in the middle of the summer and 90° days.

Stella loves running in the field. 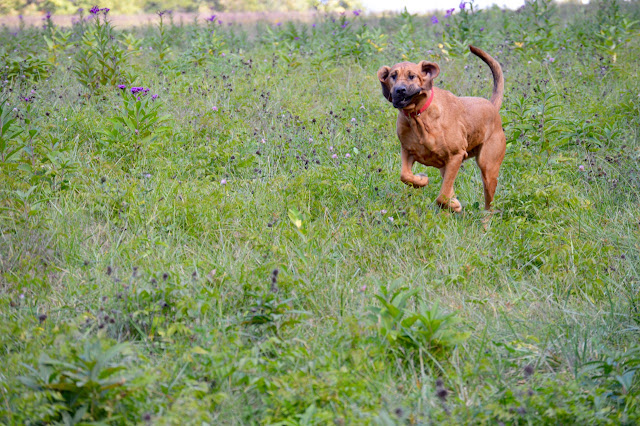 It will be fun tonight after midnight. I'll probably need some coffee, but I plan on downloading and installing Apple's new Operating System "El Capitan" on my iMac and MacBook Air. I get free unlimited data between midnight and 5am so it's the best time to install new updates.

I will also install any updates on my apps for my iPhone and iPad Mini.

Well as you can see there isn't much going on here in "the tropics" ... just beautiful weather.
at September 30, 2015