Other Blog Photos Make Me Want To Travel

It's been great weather here in "the tropics" but I seem to be wasting my days away. We spend time outside but not all day and not working projects. The trips are based on when the hounds or I want to go outside. The camera is usually taken and sometimes I'll get some shots that are unique.

Yesterday was one of those times. I took 31 photos of all four hounds lounging in one spot in the yard. Unlike the first group photo where I could barely fit all four hounds together in one photo, this time they stayed in a group and slept some. Here are a few of those. I posted a new album of all 31 photos on my Facebook page. Later tonight after midnight since I am short on data, I'll post all 31 photos to my Flickr account that is linked in the upper left of the blog.

Hard to believe all four hounds stayed in this formation without moving, long enough to take that many photos. You can tell which hound has a hard time of sitting still for any length of time as her nose is working fulltime all the time. 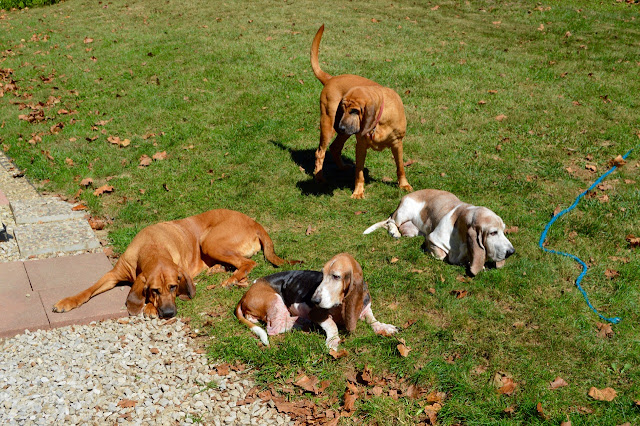 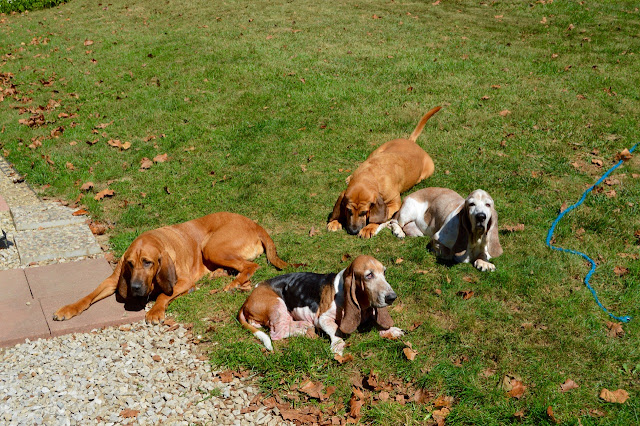 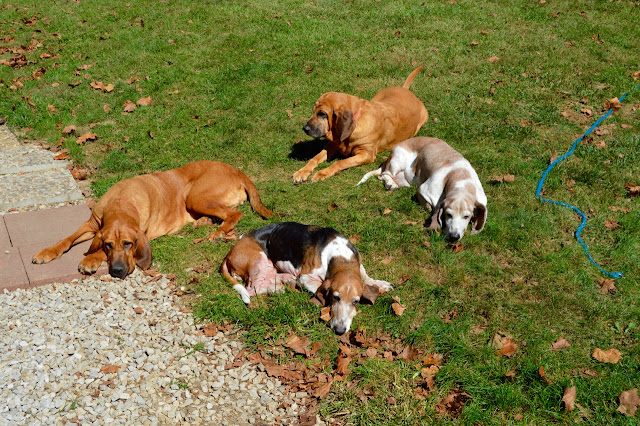 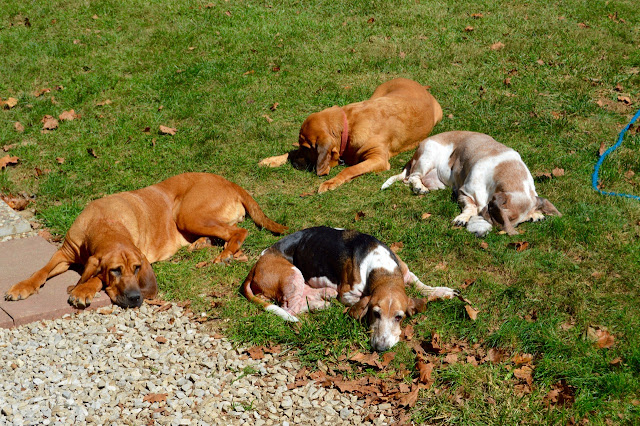 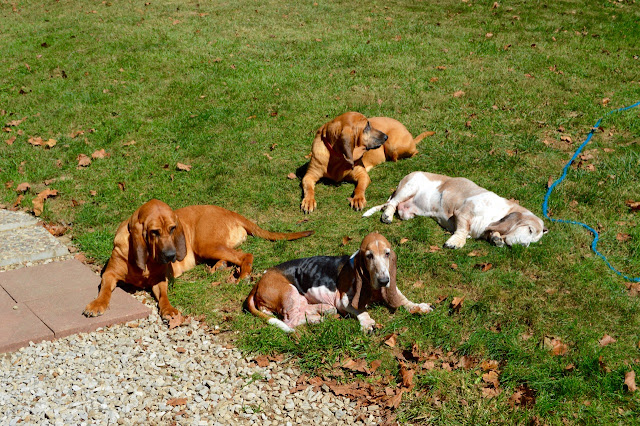 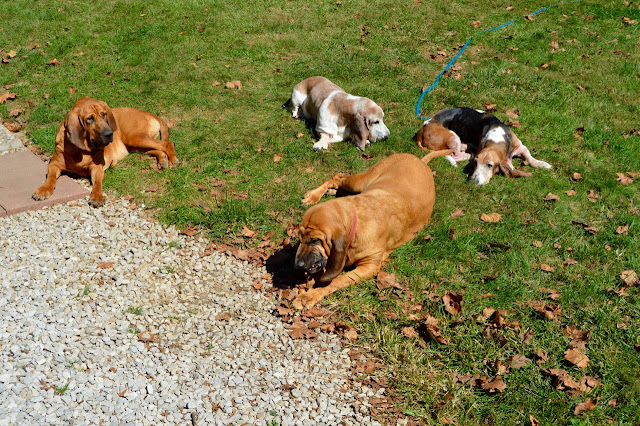 Of course the day started with Sadie and Stella playing as soon as they hit the yard around 9am. They barely got out of the house before they started "attacking" each other. Stella has the black tipped tail and brighter red collar. 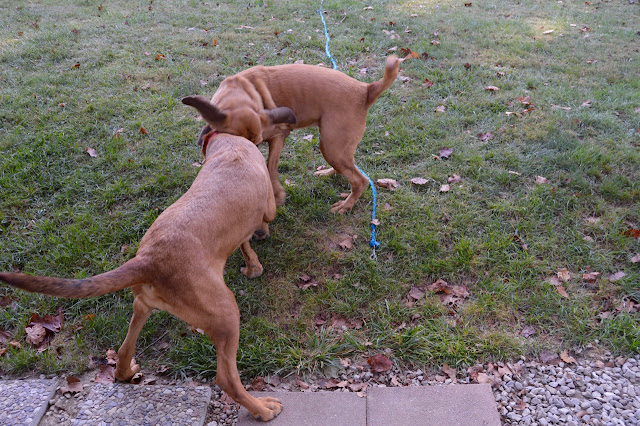 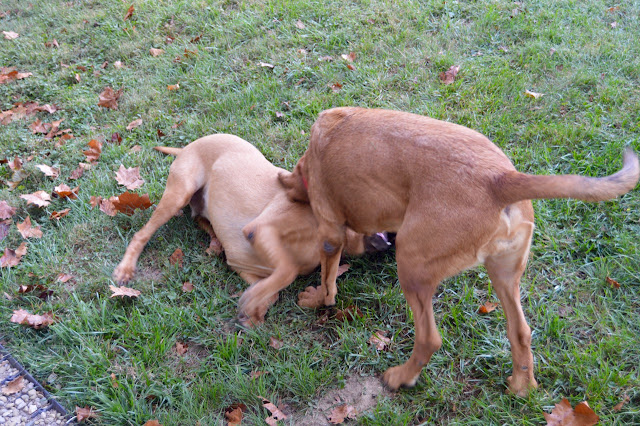 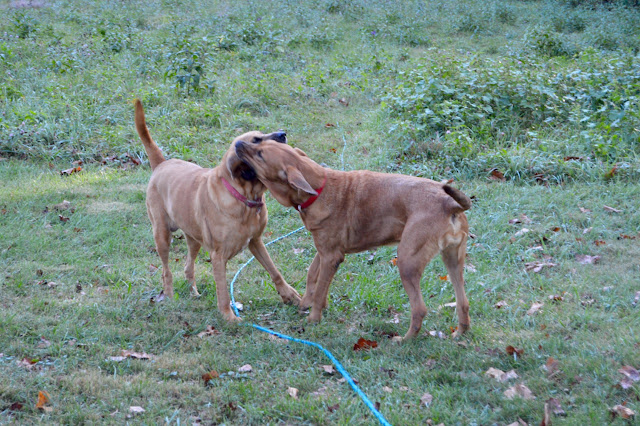 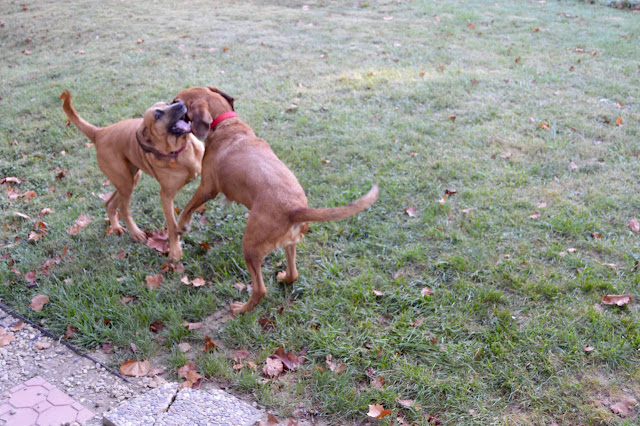 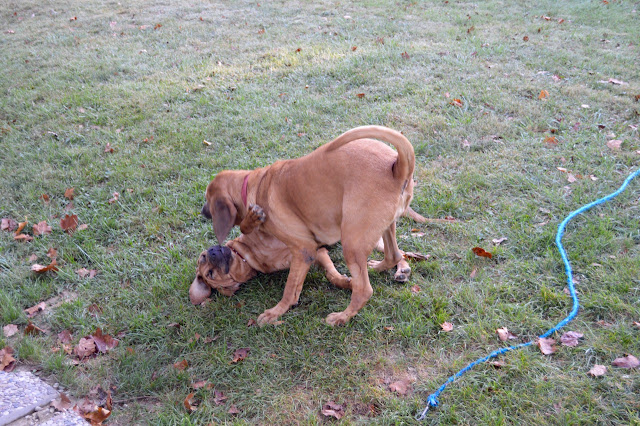 For the 2nd day in a row, Heidi came out with the other dogs, laid in the backyard and for the first time that I can remember ... she went on the walk and led the pack for the 2nd day in a row. Even after the bloodhounds and I went inside after the photo shoot of them laying around, she and Winston slept in the grass for almost 30 minutes longer before they came inside. I would think she has to be feeling better if she does that. Her skin is growing new hair on her rear legs and shoulder ... it's a slow process but it is coming back.

We start the 2nd week of her taking a the new probiotic today.

First it was just one hound, then two, then four .. they enjoy that sun after they eat around 1pm, as long as the temps are no higher than the low 80's. 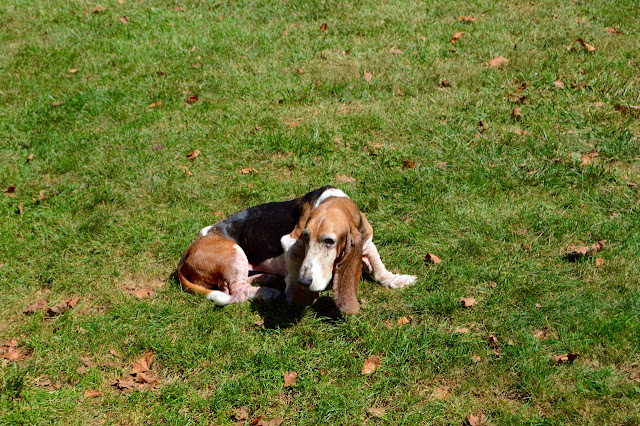 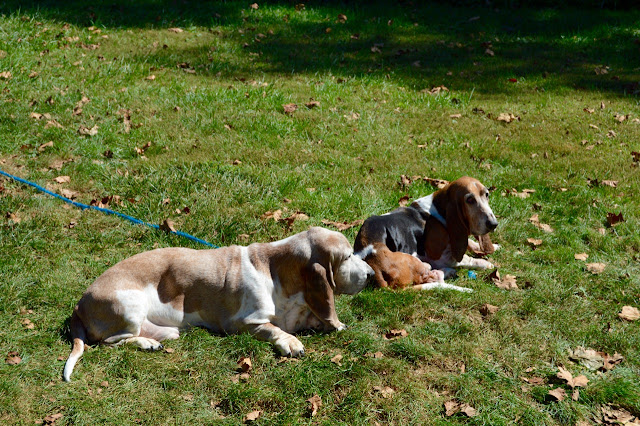 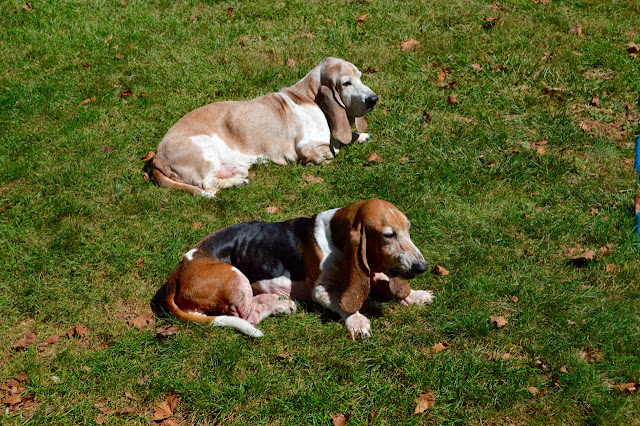 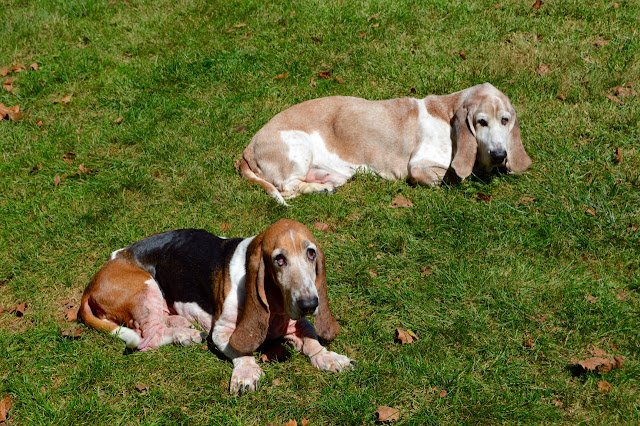 There are photos that I do miss though. Like the deer the other day. A lot of photos of Sadie and Stella inside doing things together because they seem to move or stop what they are doing once they see I have the camera on them. Like right now they are laying next to each other chewing bones, a few that Sadie hadn't touched in months/years but Stella found them and put them into a pile.

It wasn't all about hounds yesterday, nor photos ... a lot of it was me thinking about RVing. Yes, that urge hit again yesterday stronger than ever. I thought back to our trip in June and by the way the hounds acted yesterday relaxing together quietly ... I could see they all could do well traveling again.

I don't know what brought on the RVing urge. It could have been all the travel blogs I read and probably their beautiful photos of the places they are. It might be the things I see in the house and yard or even the driveway ... that are a never ending maintenance effort. I also wondered how much electric power will increase once the new EPA laws are put into place for coal based power plants.

My local utility company co-op is very concerned about that and all that means is a large increase in cost for electrical power in the future.

I thought back to the first time I read about Glenn at www.tosimplify.net, who is now traveling in a VW Vanagon. I also read a few blogs where the travelers live in converted vans for long periods of time if not fulltime. I know a van is not a good option for me with the hounds, nor is a truck camper that I thought about a few years ago. Yet those blogs remind me of the trip this summer, the time in the 70's I also lived in a VW van by choice in Southern California along the beach. Or the summer trip riding my bicycle cross country and then up the west coast to Seattle.

When I read about people repairing their large Class A or Class C ... I wonder how much those repair costs are. Probably none of my business but it would give people besides me that are on the fence of which RV to buy, an idea if they can afford a used RV if they knew the actual repair costs. Those few bloggers that have posted their monthly expenses after a year of full time travel show me that I would need to sell my house to travel the majority of time.

Yet those photos of the SW, Glacier NP, all the Utah NPs, New Mexico, Colorado, Wyoming and the Dakotas are a major draw ... having me wanting to travel. Like I said the other day, the urge is always there and will be always there.

I know it's best for the time being for Heidi to remain here under a routine to help her heal. She is slowly getting better. That's not using her as an excuse for not traveling ... it's just a fact. Sure she would jump in the FJ right now if I decided to leave but down the road under her current condition it wouldn't be good for her. She was not skeleton skinny when we traveled in June.

I also wondered what we would be doing if I had kept the Coachmen Class C and still retired when I did in April 2014. I would not have been towing a car/FJ. All the four vehicles I had at the time were NOT potential toads for the Coachmen. After finding out the seller lied about the year and the reason for the discrepancy in the year showing on the paperwork, the Coachmen had a smaller engine than what I thought I was getting. I should have been smarter than that and checked the VIIN for size of engine and the real year of the RV but I did not know how to do that at the time of purchase. 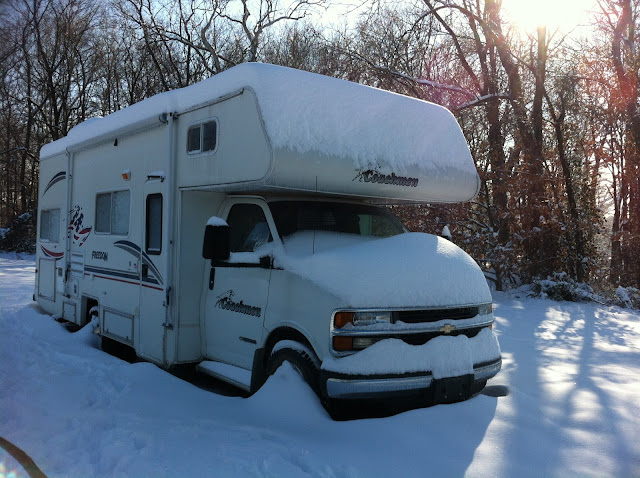 While I slowly climbed the mountains in Colorado this past June in my Toyota FJ, I knew then the Coachmen Class C would have had a hard time towing a vehicle up and over those mountains.  It would have been hard just for it to get over them, although many people do travel all over the west in Class C's towing a car. So how well would that have worked out with the Class C being the only vehicle and 3-4 hounds?

There were not then and are not now any regrets selling that Class C in 2014.

Even while looking at the photos on all the blogs and seeing great places .. I also remembered my thoughts I wrote about on this blog, where I was sitting in a great State Park north of Rifle Colorado with great views. I had fed the hounds, they drank all the water they wanted, the tent was set up and they were sleeping in the shade ... while I sat at the picnic table thinking "what next" and a slight feeling of boredom. Would that feeling gone away the longer I traveled? Was my only enjoyment planning the trip and driving? 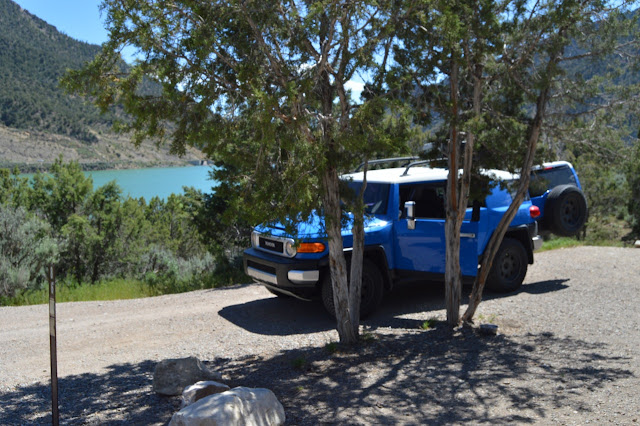 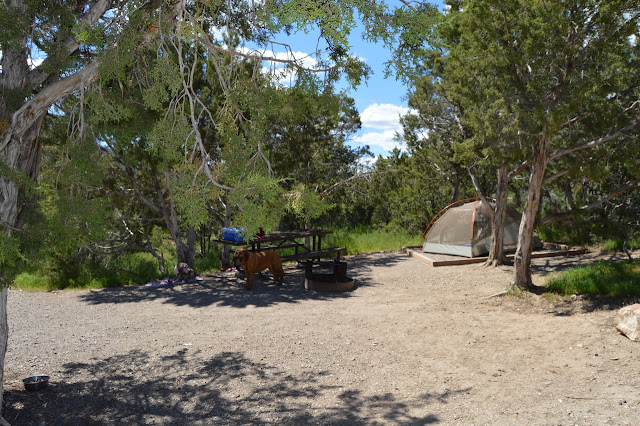 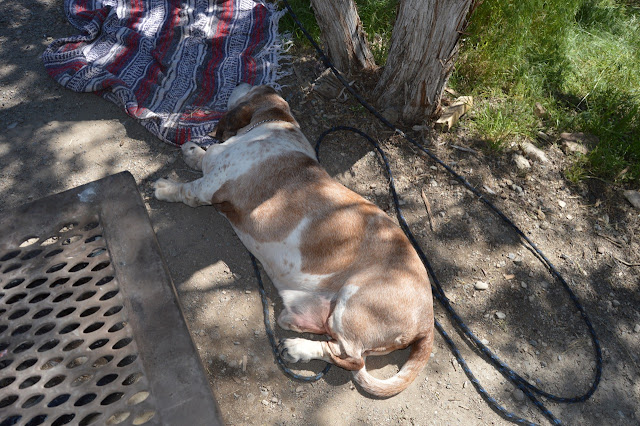 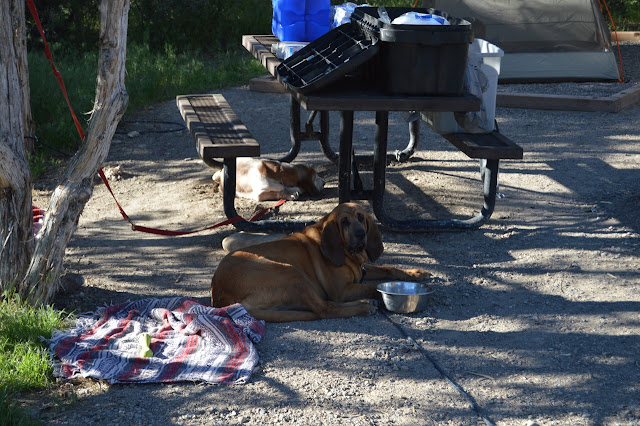 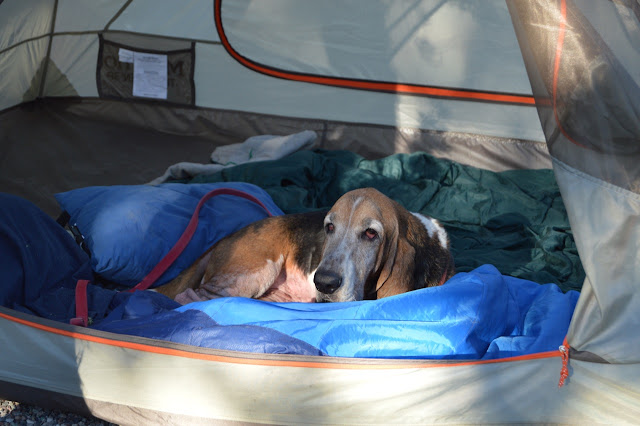 So for all the pluses I was feeling yesterday I remembered the negatives. Later those thoughts went away as we sat in the sunshine and later doing the daily walk through the field on a beautiful afternoon. Heidi and Stella were leashed, the other two roamed free and Winston was slow as usual ... but he's over 11 now and I have to remember that. We all enjoy living here but it's probably time for another short vacation or roadtrip.

On a side note, over the years, a few times I have even stopped this blog and almost shut it down ... thinking the less RV stuff I saw would make the travel urge go away. It would only be weeks later that I would return to reading all the blogs and start blogging here again. I drove some readers crazy with my decisions going back and forth. A couple even were angry ... lol

No, I am not having any second thoughts about not selling out and traveling. I'm fine with the decisions I've made. Plus the 4th hound, Stella is not a factor ... she is simply a great bloodhound that is willing to go anywhere I want to go. The word "go" even gets her excited. I had to fight to keep both bloodhounds from jumping into the back of the FJ as I unloaded my groceries the other day.

Well it's that time of morning where Sadie has come and nudged my forearm as I type to let me know it's time to go out for them to play and search the yard and field for any animal intrusions while they slept. Maybe I'll get something done today ... all three things I would have to do while traveling ... cleaning, laundry and maintenance.

It's still great weather in "the tropics" and the day has just started.
at September 24, 2015
Email ThisBlogThis!Share to TwitterShare to FacebookShare to Pinterest