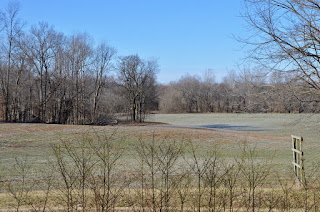 The day started with one of the strangest dreams I've had in a while. Maybe it was because it woke me up, but I remembered a few of the details of the dream.

It was so strange because I was confused why I needed to go to a job from 25 years ago. I was late for work and couldn't figure out why I was even going to work, since I thought I was retired.

I had some of my past hounds playing in the house with none of them being bloodhounds. It was so weird to see the old Winston wrestling with himself as a puppy. The other two basset hounds were laying in the sunshine sleeping and I was still trying to figure out why I was going to work if I was retired. Had something changed? 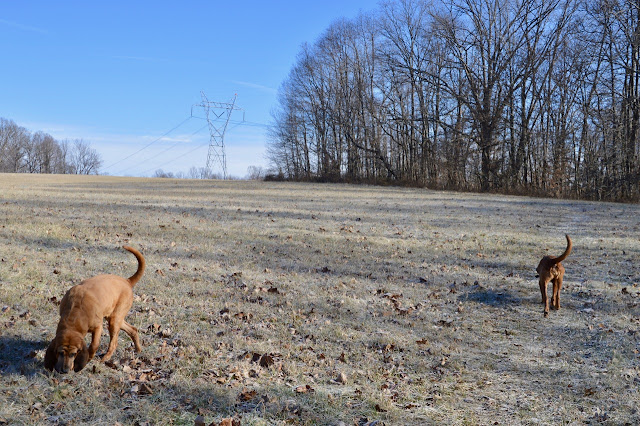 So I was more than happy to open my eyes to see Sadie standing next to the bed staring at me at eye level with that look she has every morning "I have to go outside". The bedroom was so full of sunshine I had no idea what time it was and from the dream I wasn't even sure that day it was. To say I was confused would be a compliment. I knew I needed coffee and I needed it as fast as possible.

I could tell it was extremely cold outside as I changed into my clothes, because the storm windows were covered with frozen ice. As I walked through the kitchen to let the hounds outside, my iPhone weather app told me it was 13° with hopes of getting all the way up to 38 by this afternoon.

The hounds made their normal first trip outside while I poured their breakfast kibble. Once inside Heidi sprints for her bowl, Stella starts howling with excitement and Sadie goes into her hopping up and down routine ... to bad that exercise does not help her lose weight.

I have to have both of their bowls of food sitting high on a shelf because I cannot have them on the floor when they walk in ... each bloodhound will do anything to eat both bowls of food. Yet, they never both Heidi or her bowl of food. 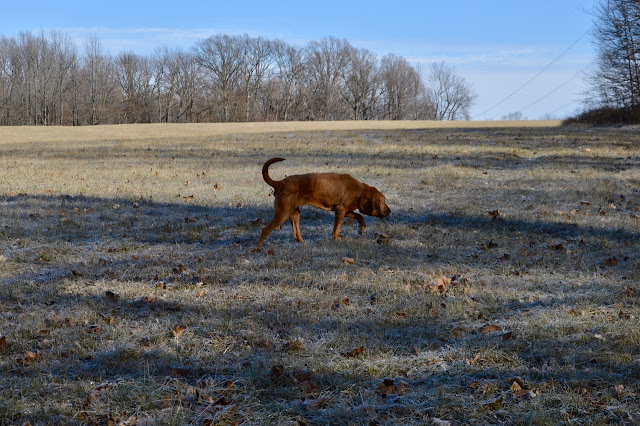 The field was covered with frost, the air was crisp but it did not feel as cold as 9°, in fact it felt a little warmer than yesterday's morning walk. With the down parka and ski gloves I was very warm. 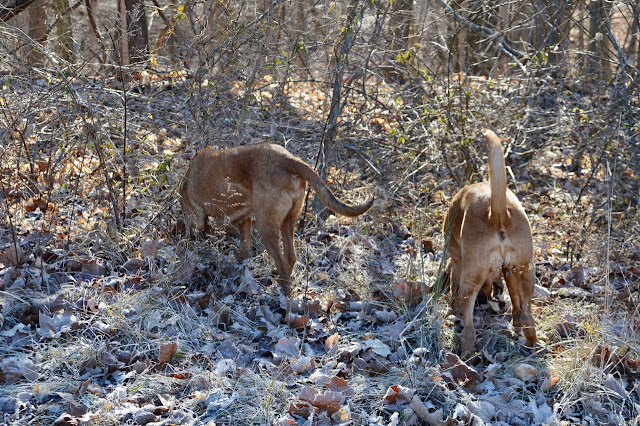 I would really like to find out what is buried so deep inside those frozen leaves and grass that Stella and Sadie find so interesting. The times I have walked to where they have their noses plastered to the ground, I don't find anything most of the time. 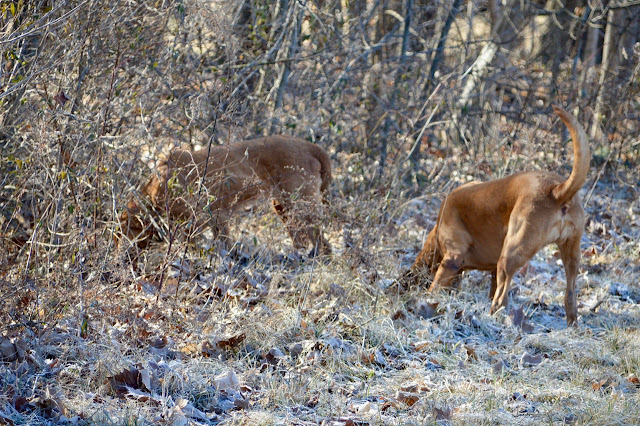 Sadie turned one last time to see if Stella was coming and then took off for her walk. She is the perfect hound for walking. She keeps up, still wanders off following her nose, yet never falls too far behind ... and will come when called. Even Winston use to lag way behind at his own pace and at times in June before they baled the field he would get no further than the corner of the house barking the whole time we were gone. I still miss that hound a lot. 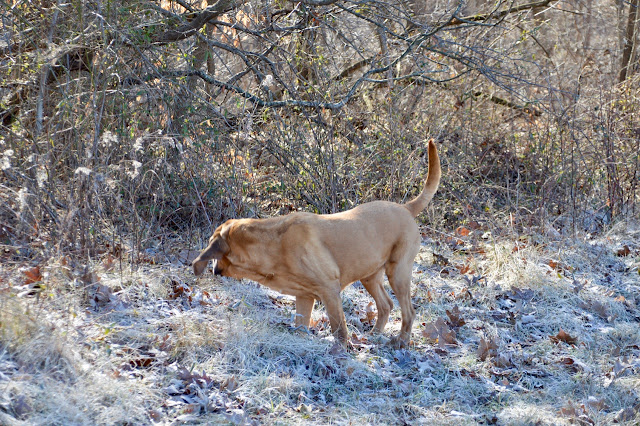 At this point I am almost to the corner of the field where we veer right. I could tell by Stella's lack of movement it was be the same for her as it has been the past week or so. She will not get as far as the first corner and will walked toward the neighbor's wooded area without heading our direction. 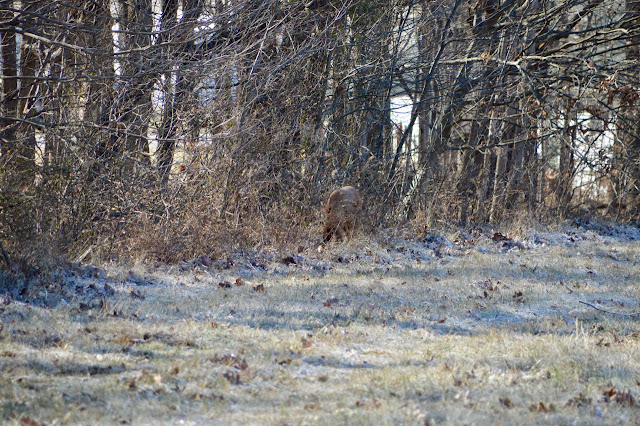 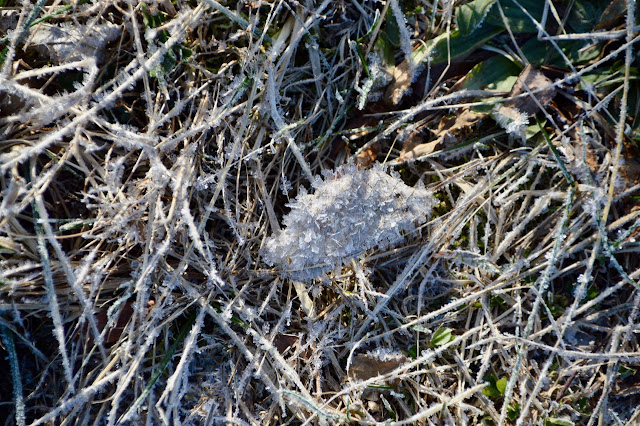 The cold weather had energized Sadie. She was running everywhere and at times faster than I could keep her in the view finder of the camera. The camera caught this strange stance ... she was actually moving at the time. 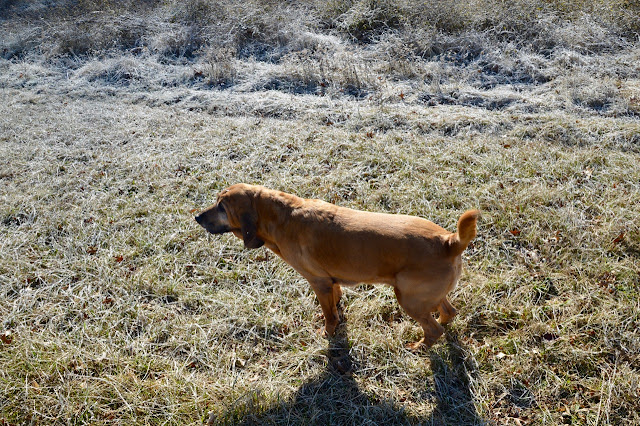 She tracked a lot of area today but never stayed long whenever she stopped. 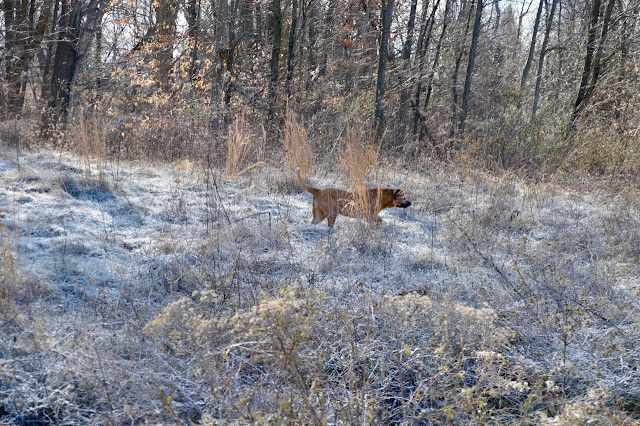 In the meantime there was still no sign of Stella as she was off in her own little world. 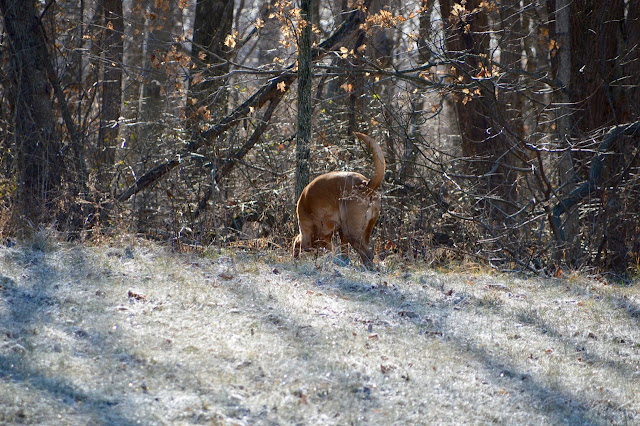 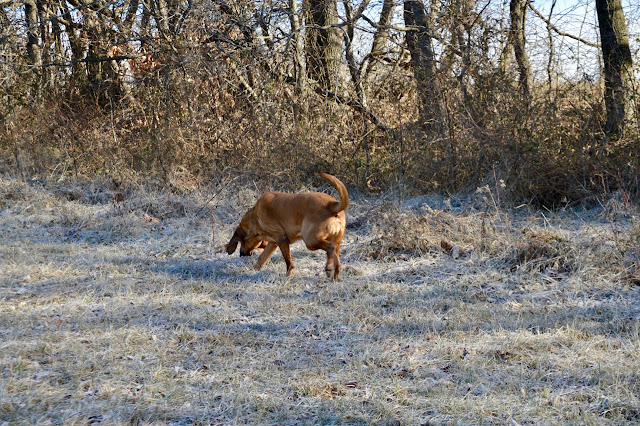 Hard to believe I walked into the same pile of frozen dirt causing me to stumble forward with the same sore toe from previous accidents. I was still able to hang onto the camera and decided it might be time to move back to the steel toe hiking boots in our next walks. 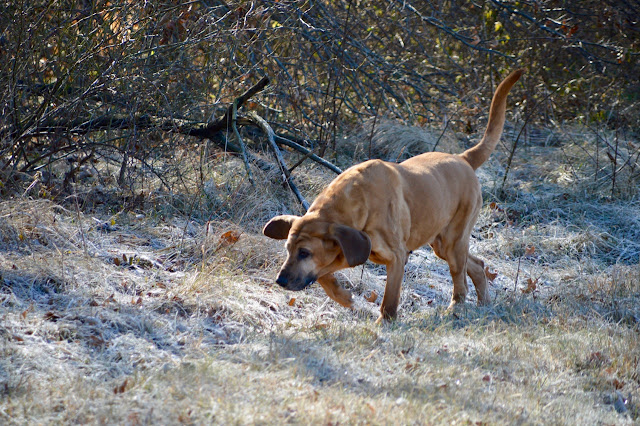 As I was about to make the final turn toward home, look who I see up on the horizon staring right back at me. Does she come when I call her name ... not a chance. She went right back to eating deer scat. 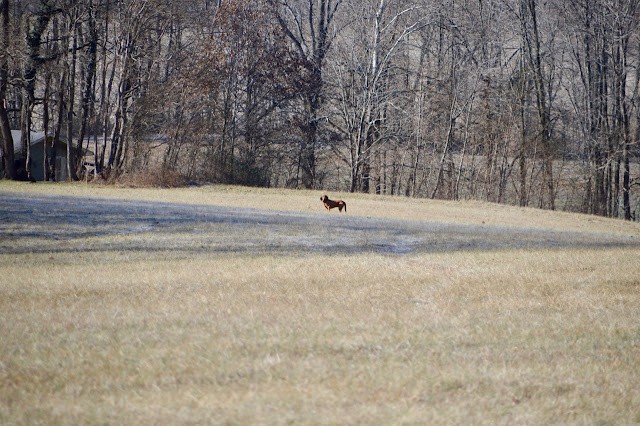 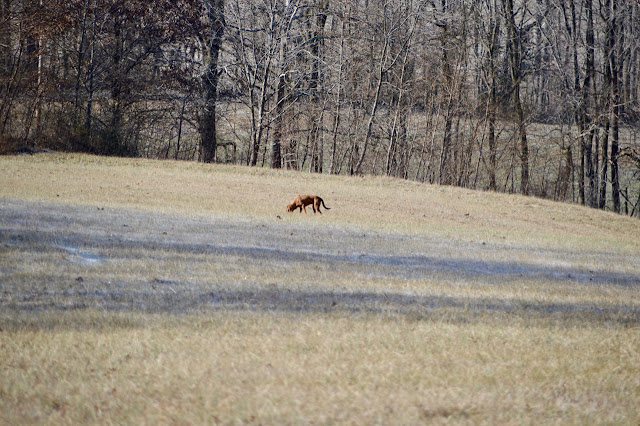 Sadie decided to go check on Stella without me saying a word today. I kept walking and knew I'd have to walk over to Stella before she would move. I can't say that I am a big fan of her recent routine and can't wait for it to change. 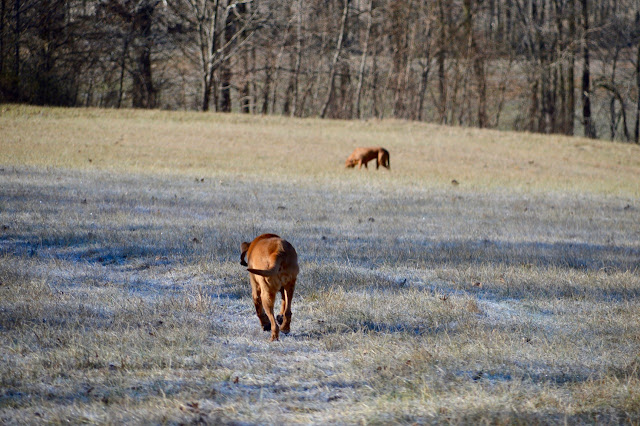 I kept calling her name as I got closer. I might as well kept my mouth shut from the response she was giving me. Not until I got within a foot of her, did she left her head and walked over to me. I guess she expected me to hook her up to the leash, but I never took it out of my pocket. 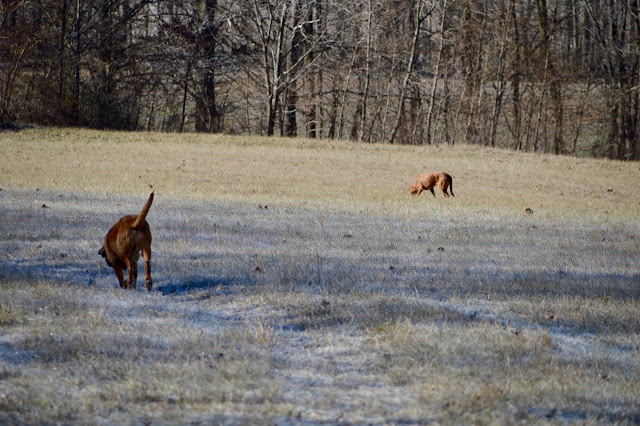 It didn't matter what she was doing, at least the morning was beautiful with bright sunshine, clear blue skies and higher temps on the way. 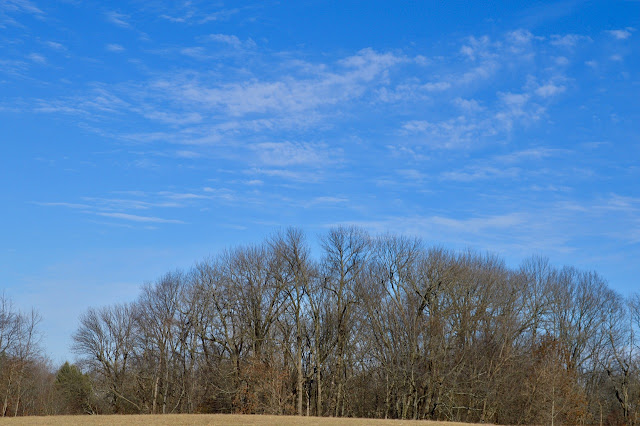 The highway in this picture is a lot further away from her than the picture shows. I'd guess Stella is about half way between the highway and the path I am on ... that's a lot of field between us. 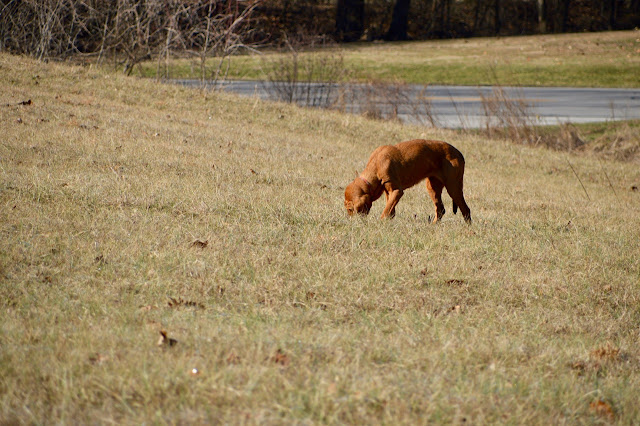 I don't care for Sycamore trees in general but this one is still nice to me. I had two more like it on the bank along the driveway until the straight-line winds pulled them out of the ground like weeds in June 2008. After they fell they covered all of my front yard.

When the ground is really saturated and winds get up in the 60mph range I wonder if that tree will fall like the others did. I hope not because if it fell due north like the others, that will be right down the center of the house.

It might be time this summer to have a crew come in and trim the top 25% off but I always hate seeing that happen to trees. If you look at the far right tree you will notice it does not go as high as the other 3 limbs.

The top of that limb was struck by lightning in that 2008 windstorm and fell onto the corner of my carport. It was long enough to be sitting on the ground at an angle, damaging the corner of the house and a good 6' above the roof. 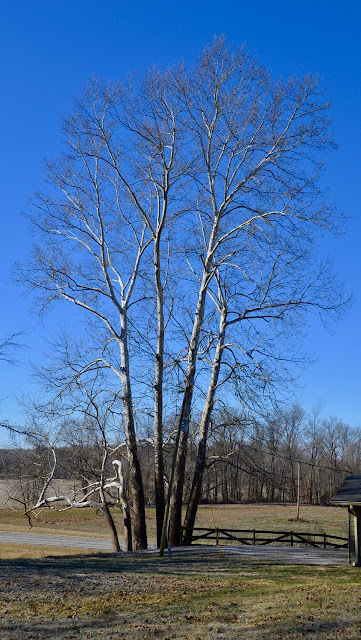 By the time I almost to the house, the hounds were happy to go inside where they instantly fell asleep, which will last until lunch kibble is served. 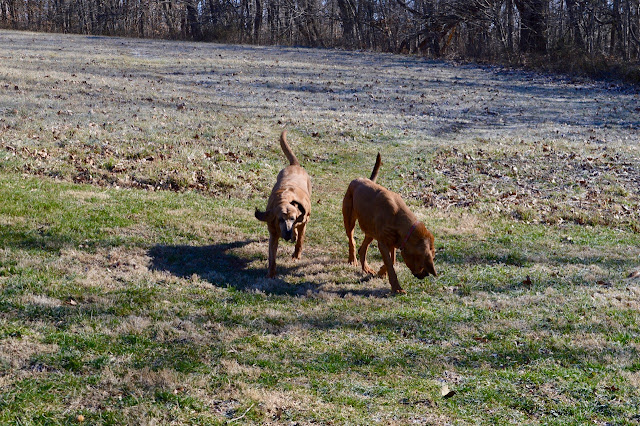 No plans today but continue reading my books. I guess I should start giving some of the books I read a title and author. I guess today I will take the chance of hearing some sort of backlash and tell you what I am reading. In today's world on social media, phone calls with old friends or those that have family dinners ... hardly anything can be discussed anymore about current events without an argument starting.

So the book I started reading yesterday afternoon and couldn't put down, forcing myself to turn off the lights and go to bed at 3am is by Roger Stone -- "The Making of the President 2016". It's a great book and shows just how close it was to having a different result in this years election, plus all the action behind the scenes you never read about.

I tried to head a different direction in subject matter yesterday in the library, but I pulled this off the 'new' book shelf. After this is finished sometime today or tonight, I'll flip into an old John Grisham novel for a change of pace. I still have plenty of books on my personal bookshelves that have never been read, yet some have been read three or four times.

No plans today except reading and another late afternoon hound walk. Did you like two posts in one day or prefer one long post showing up in the 6-7pm range?

I have stated in previous blog posts that I am a football addict but it's the same this year as many years before ... I don't watch nor read anything about the upcoming Super Bowl. I'll not turn my tv on until the exact time for kickoff and will not only turn down the sound but will turn the tv off at halftime of the game. I really wish we could separate sports and politics.

I figure by Monday I will be back at the library to turn in the two books I have now and search for more reading material. I am addicted to reading right now. Any suggestions for good books to read, any of your favorites?

I am happy and the hounds are happy today in 'the tropics' of southern Indiana.
at February 04, 2017