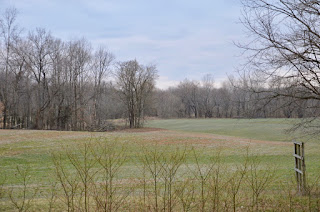 What a big difference it is to start the day off 25° warmer than yesterday morning. With the feel of freezing gone I didn't mind the overcast skies.

The hounds didn't stay out long on their first trip of the day, there was  a very light rain and they were more interested in having their breakfast kibble.

My daily coffee went fast, internet reading went fast, so the first walk of the day was about an hour earlier than normal. The hounds didn't mind. Both went on the walk this morning like always but after I had downloaded the pictures from the walk the majority of them were of Stella, so she got the headline today in the title. 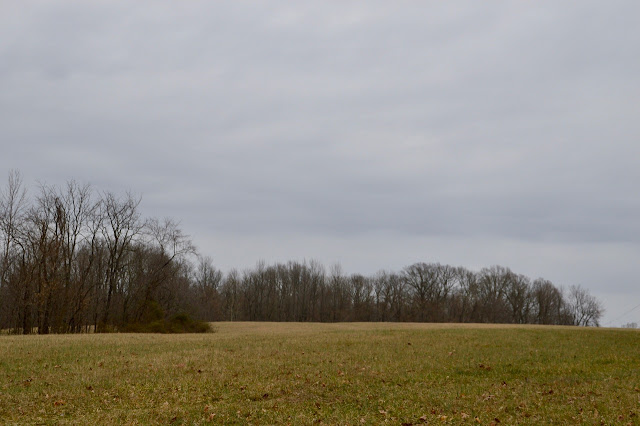 I was somewhat undecided what the parameters would be for Stella this morning. I wanted her to have free range but I also didn't want her hanging way behind and then slowly venturing over to the woods behind the neighbors house.

She didn't take long to show me she was on her own schedule this morning and the words "come on Stella" were going to be the theme of this morning. Sadie and I continued to on with occasional glances back to check on Stella's location. 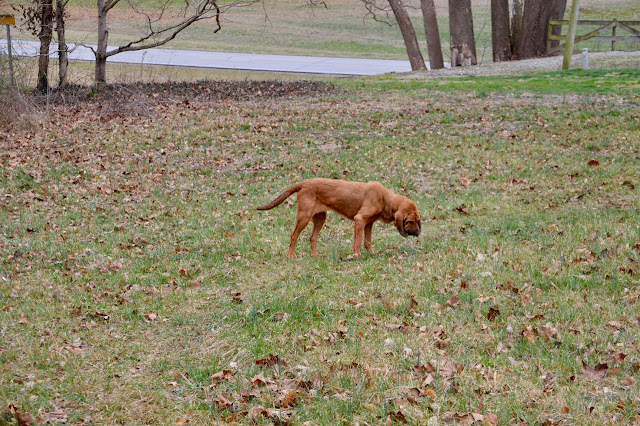 I wanted to test my auto focus setting on this next picture. I wanted  the bare tree limb to be in the background of the focused green bushes. I finally did something right. 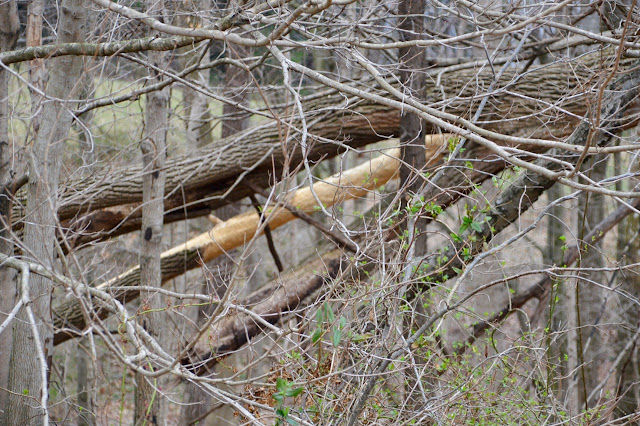 At this point of the walk I knew I wasn't going to backtrack to hook her up on the leash. Sadie and I were too far away so I yelled 'come on Stella' and was shocked at her response ... she trotted our direction. 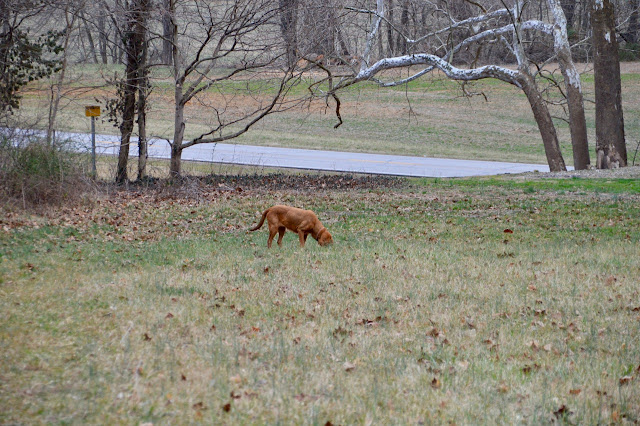 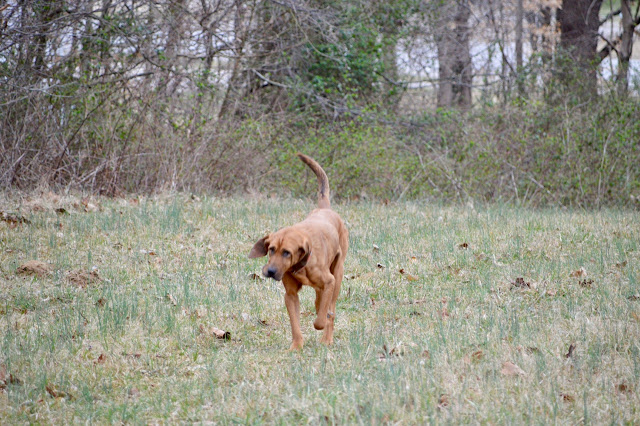 For readers that are unfamiliar with the bloodhound breed, the word 'obedience' is not part of their vocabulary. The words 'stubborn' and 'scents' are part of their DNA. Still it's nice to have them respond somewhat positive when I give a command ... otherwise I'd spend all of my time outside in all kinds of weather while they explored for hours and hours. 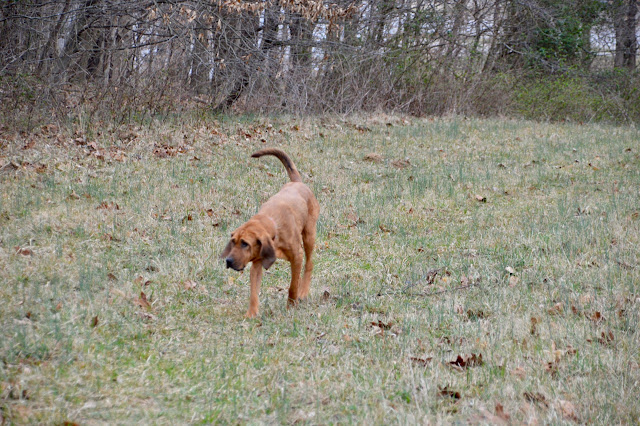 The word 'scent' became a factor on her trot toward Sadie and I. She needed to stop and check out something. I've been reading a couple of different books in hopes of gaining more knowledge on what is happening in that rock hard place between their ears ... known as their brain. 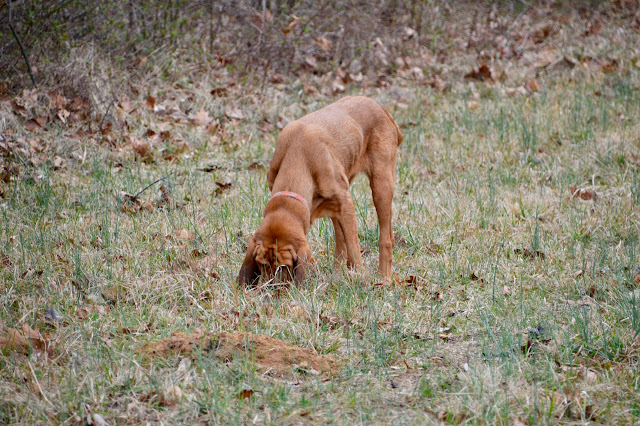 The word identifying or identification is the main reason for their intense sniffing and even eating strange material they find. In some cases they do it because they like it but most of the time it is just the process of identifying what animal has been in this field prior to their arrival. 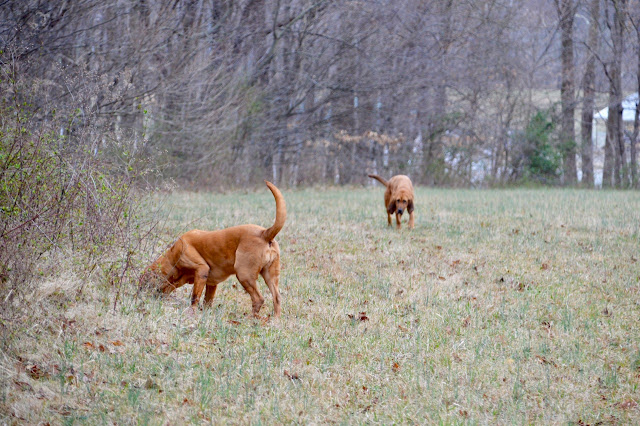 No leash was involved this morning at any time. That word was never spoken to get her to respond because she continued to walk toward us whenever I called her. 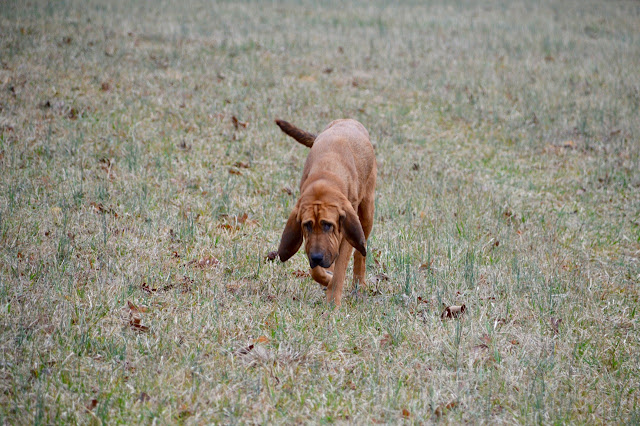 Rarely is that a direct, route with her. Sadie is entirely different and basically needs no adult supervision. LOL 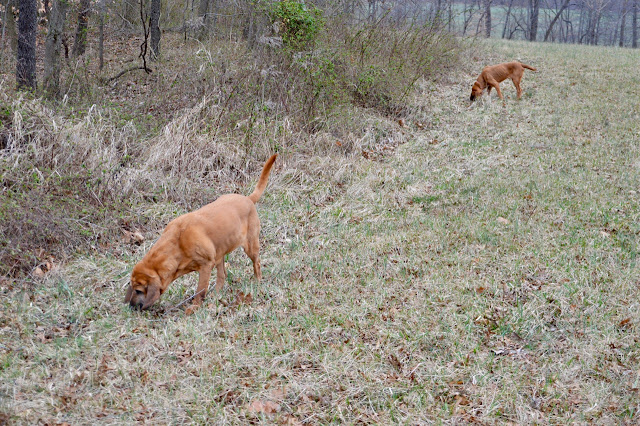 These next three pictures will give you a very good example of my command "come on Stella" and her responses. The pictures show exactly what takes place 99% of the time when given that command. 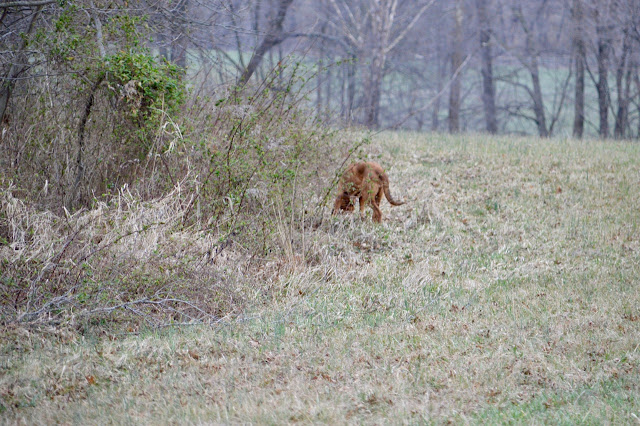 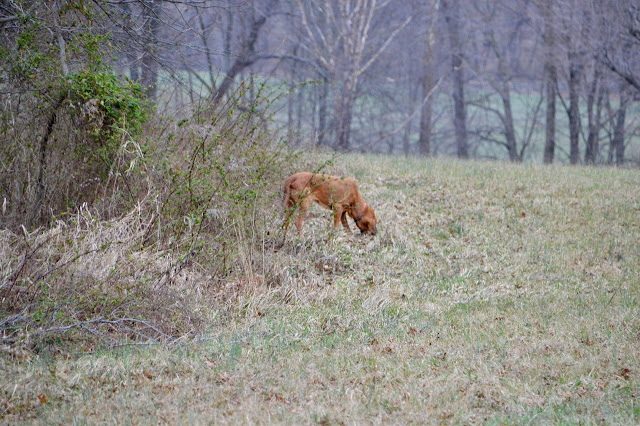 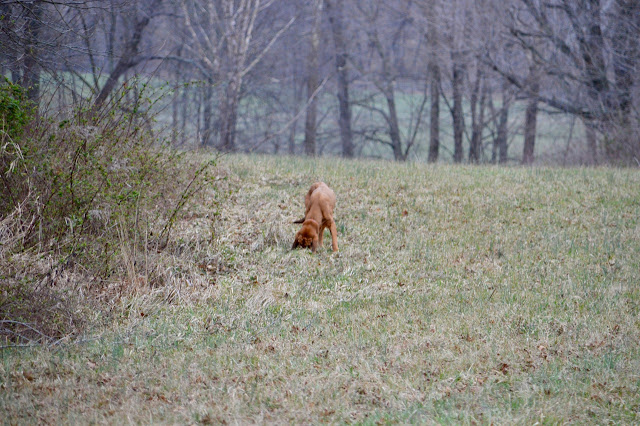 After that I gave up, turned around and headed along the back of the field while Sadie explored along the fence line. With my back turned, Stella had sprinted to the far right corner of the field. 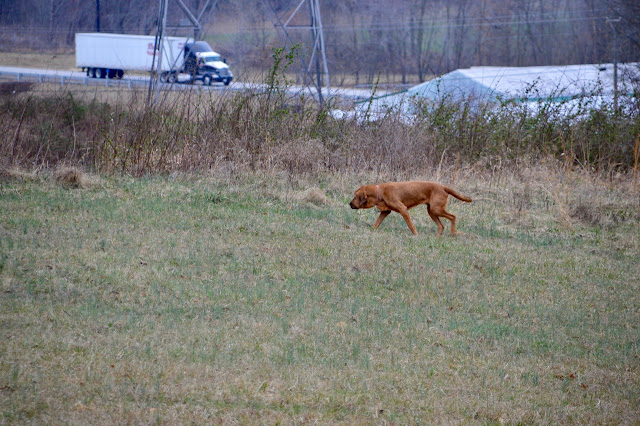 For some strange reason she started heading our direction without being called. Her slow walk brought out her personality, which is funny and pure bloodhound. 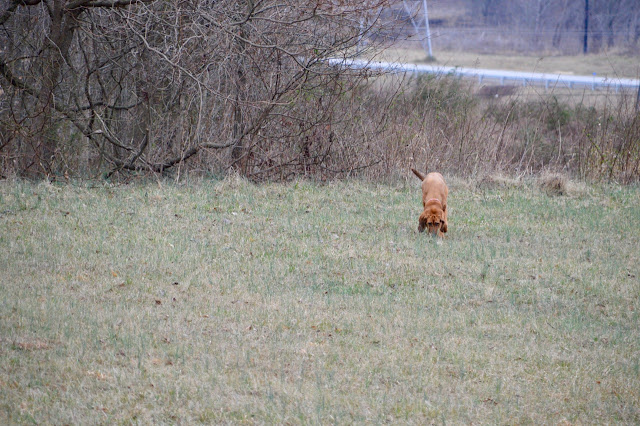 There is no trotting in this sequence ... just one slow step at a time, you would think she was walking in slow motion. Out of all the hounds I have had since 1987, I've never had a basset hound nor a bloodhound walk as slow as she can. 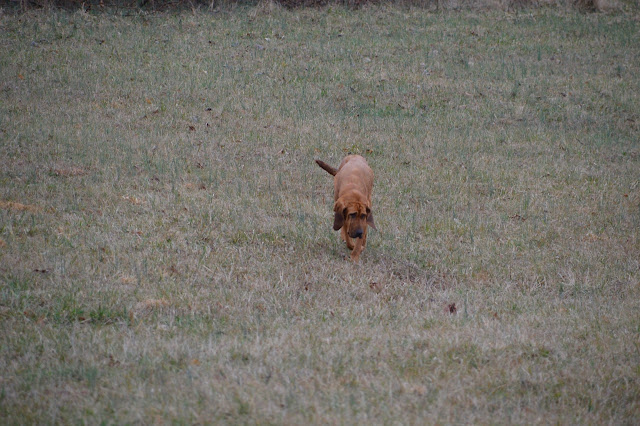 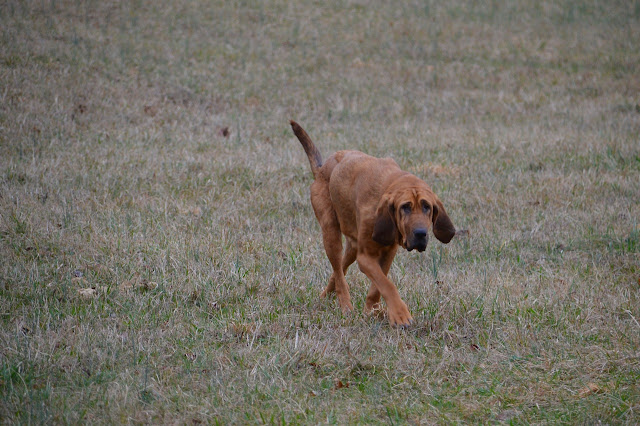 I would pay any amount of money to know her thoughts when she has that frown on her face as she is walking. 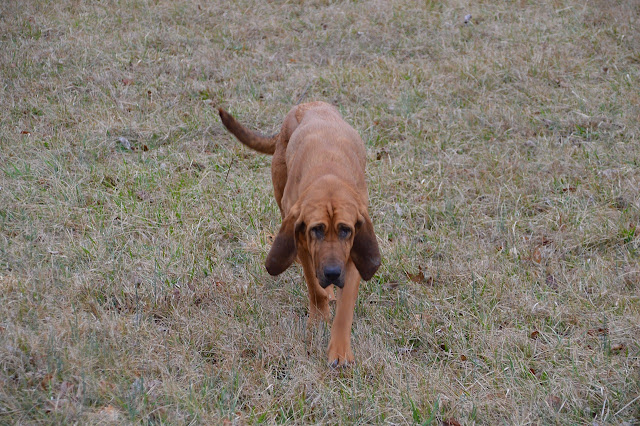 After Sadie ran over to her, tapped noses together and then immediately turned to head back to the edge of the field, Stella followed her. She responds to Sadie better than she does to me. 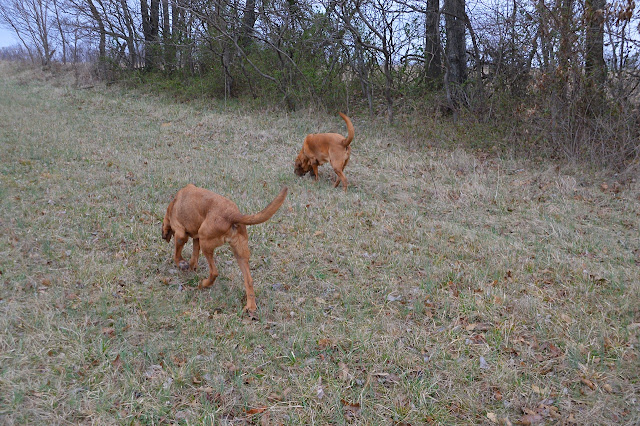 Of course there is always one spot on almost every walk where both of them want the same thing. They share well and never fight over what they find. 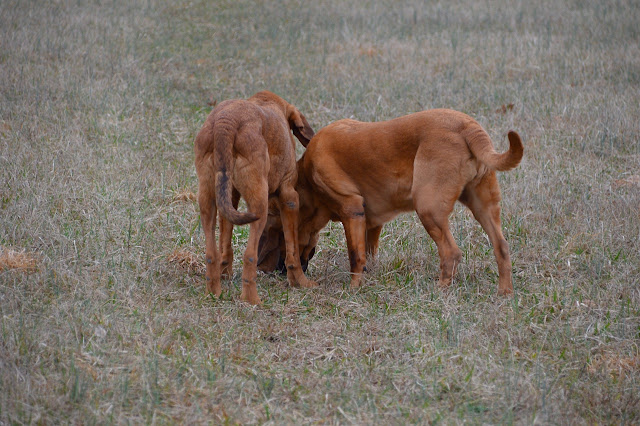 Another walk is in the books, no winds blowing cold air today and I can see possibly three walks by the end of the day. With cold weather over the weekend it was the perfect time to do laundry and some house cleaning ... so the week is wide open for activity. 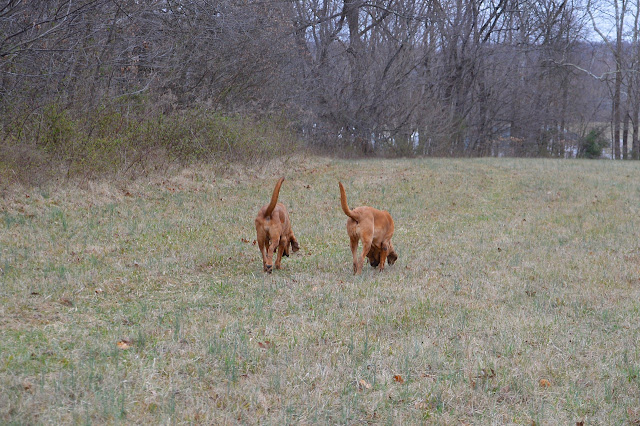 In the Apple Photo program you can edit your pictures after you download them from your camera, phone or ipad. Most of the time just one click on each picture named 'enhancement' will adjust the picture without anything else needed. Today though I clicked two other adjustments instead of the one labeled enhancement.

Can you tell the difference in any of them? 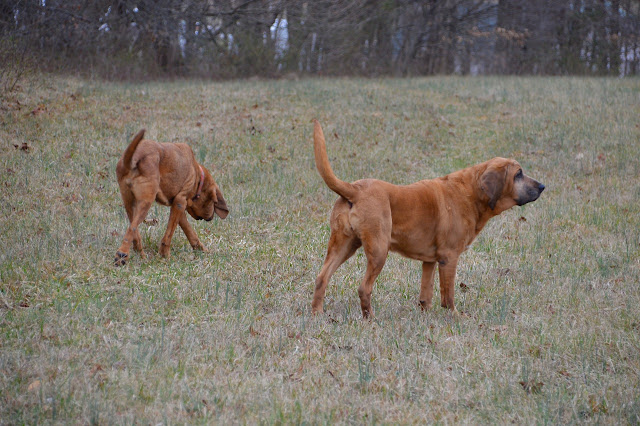 Slowly but surely they both head back to the house with a little coaxing by me. For new readers of the blog, yes I can leave them outside to let them roam the field on their own but this past summer, they kept moving the boundary out further ... too where they were too far away and in one case almost disaster.

Living 80' - 100' from a major highway, in a passing zone, I have to be careful on just how much freedom I give them when I leave them outside. They never go to the front yard unless I am there or if Heidi is in the front soaking up some sunshine. 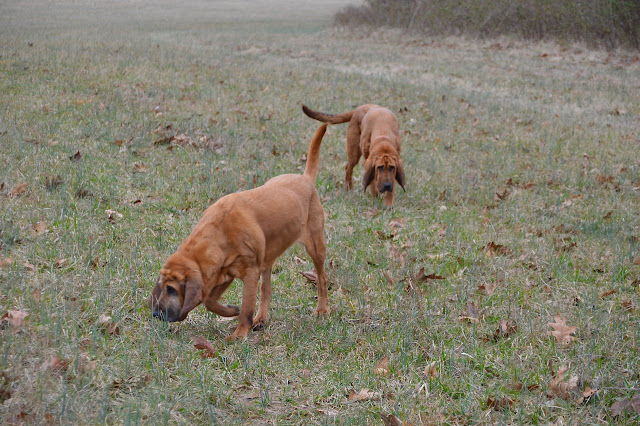 When I looked at my blog traffic stats this morning it was funny to see that the word 'Idiot' in my blog title the other day tripled the number of visitors. I have a feeling that the stories I posted did not match up with their expectations ... as 62% of them were off my blog in 5 seconds or less.

It just wasn't that blog post for the rate of escape, that 62% is the overall average for all blog traffic. Then 29% of visits have this site turned on their computers or tables for over an hour.

I remember last year I tried writing one blog per hound, in their view, from a suggestion of a reader. That brought my total blog count up to 7 counting the two private blogs I write on regularly. It was fun writing in their point of view but way too time consuming so I deleted them and then let their domain names expire this year.

Again you will notice more blogs added to the left sidebar. Some of them might be interesting to you. A few blogs I use to list were deleted months ago when they became more political and controversial. I try to stay away from that here. This blog is more about the daily life of the hounds anyway and the pictures I take.

I mentioned last summer that I would like to take some pictures of my local small town showing the damaging effect of high unemployment, a new interstate nearby taking away traffic from downtown ... but at the same time keep my location private. It's hard to do and I am not sure how I am going to work that out, but I still like the idea of a little history.

After Heidi's walk in the field last week, she showed some irritation. Could it have been the field grass? The reason I am asking that question is, after months and months of not licking her paws down to bare skin ... the morning after her walk through the field, both of her front paws were bare skin ... she had licked them that much.

I almost forgot, on the right sidebar under 'Labels" I added 51 more topics. Those links are rarely clicked but useful. I basically added that many to even out the left and right sidebars since I went back to listing 4 posts on one page instead of just one post per page.

I think near the bottom of each post I am going to start listing an off topic thought, whatever is on my mind. I'm hesitant in doing that because it might show just how crazy I really am ... LOL

No ... I didn't watch the Oscars last night.

What will happen this week in the 'tropics' of southern Indiana?
at February 27, 2017