This Weather Still Amazes Me 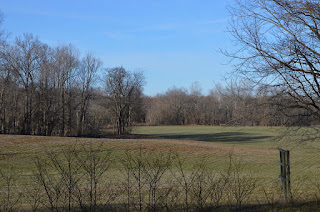 I hate talking about my local weather everyday but it's amazing and hard to believe for the month of February here in the Midwest.

It was cold today with winds changing from their normal SW direction and brought cold air from the NW/N around 15mph.

We still got our two walks in, bundled up in the down parka, ski cap and ski gloves. It was cold with that wind blowing but it was sunny and I could handle that. With the winds, most of our day stayed around 40° and the 'feels like" close to 33°. The hounds got their walks in and solid amount of sleep throughout the day.

Starting tomorrow that is a different story and what I find amazing. I am looking at a 10 day forecast of no days below 62° and even one day above 70°, which means Heidi may actually go outside and spend some time in the yard. 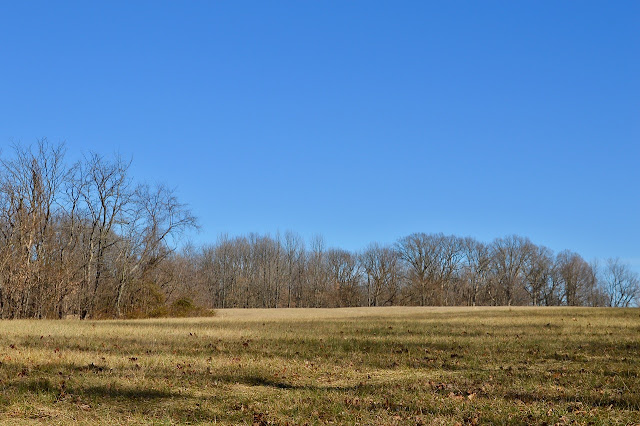 I decided this morning I wasn't going to say a word to Stella or Sadie on our morning walk ... they could roam where they wanted and eat what that wanted ... I was tired of saying 'come on' and 'stop eating crap'. 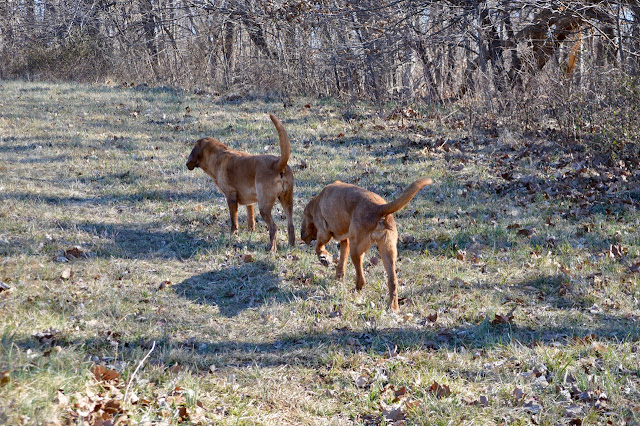 About the time I took this next picture of Stella I turned the opposite direction so I wouldn't see what it was she was eating. 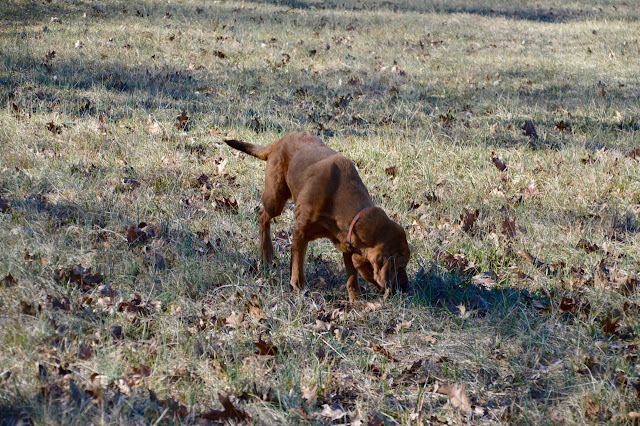 Same with Sadie ... I turned after taking the picture and kept walking. 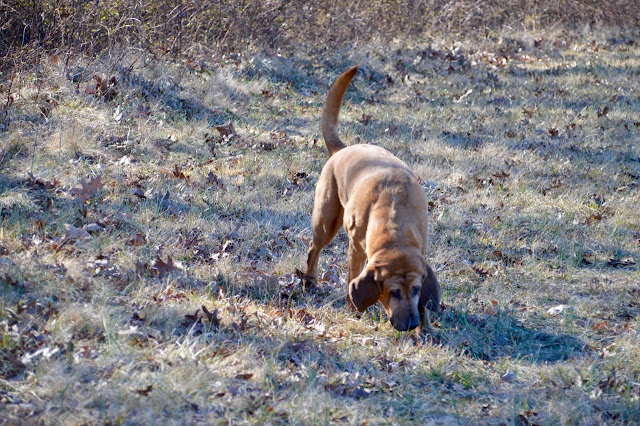 I figured I would have to pick Stella up on the way back and most likely over by the woods behind the neighbor's house but I was wrong ... as I turned to see what she was doing ... she was sprinting toward me. 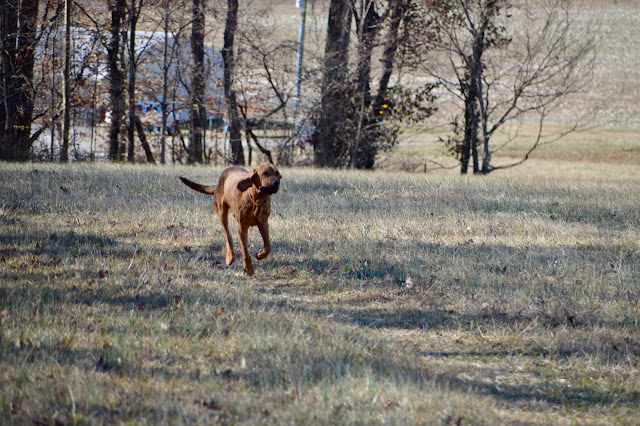 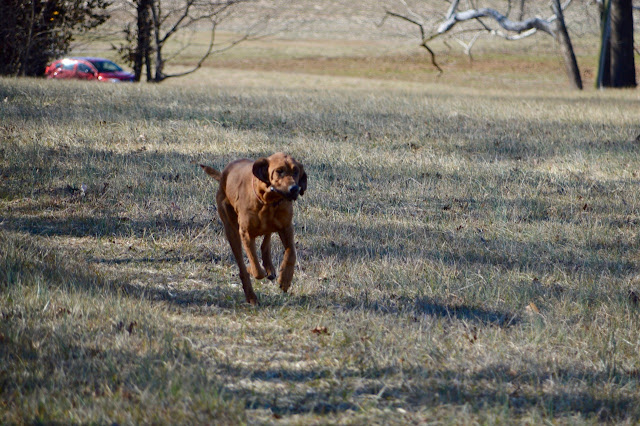 I thought she was going to slow down next to me to get a pat on the back but she kept running to catch up with Sadie. Both of them stayed out in front of me for the first half of the walk. 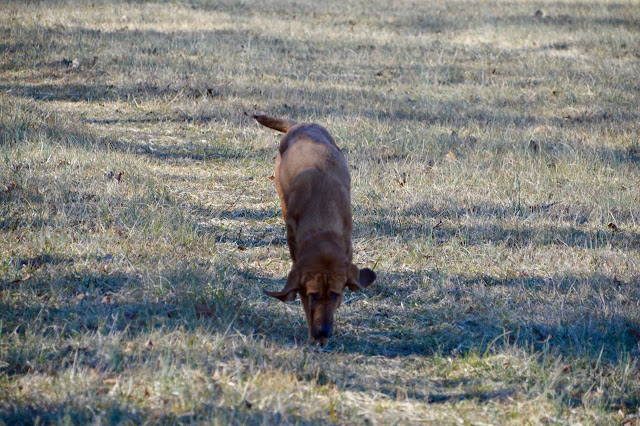 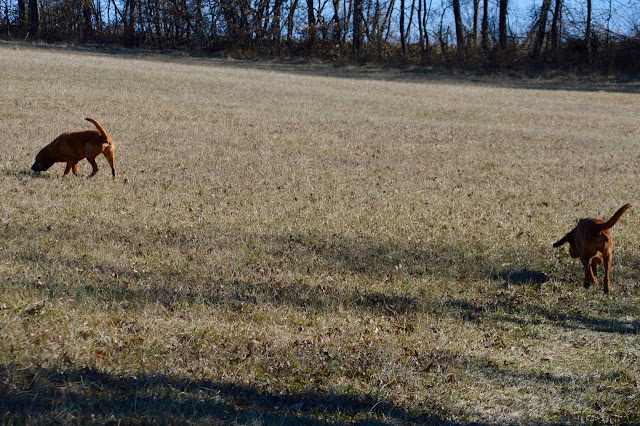 Sadie got there first ... Stella decided to find her own. 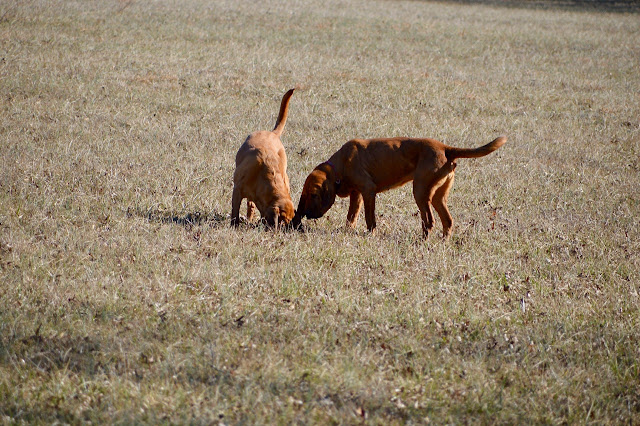 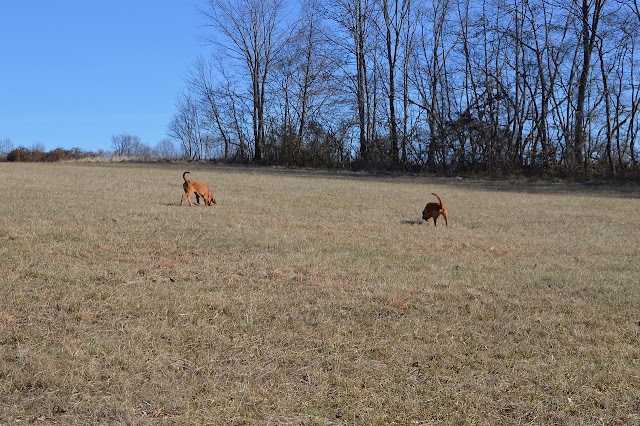 By this time the wind had picked up speed and it's the coldest air I have felt in a couple of weeks. I kept thinking about tomorrow and how the high temperature would be close to 64°. Would it be too much to dream about a mild March and close out a mild 2017 winter? 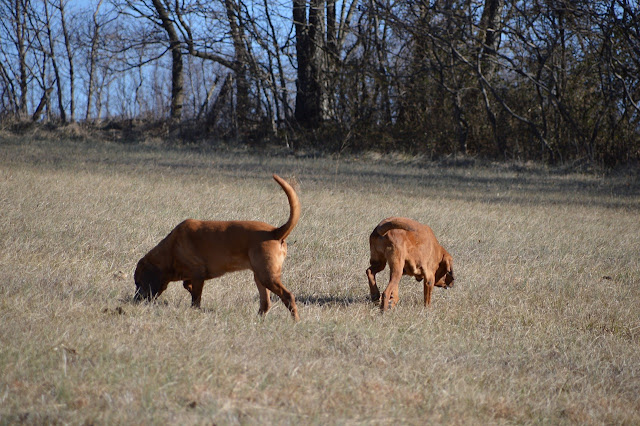 As I walked along the back edge of the field, both hounds explored different areas of that part of the field. That was fine with me, they were out in the open doing what they wanted to do and were within walking distance if I had to go get Stella later. 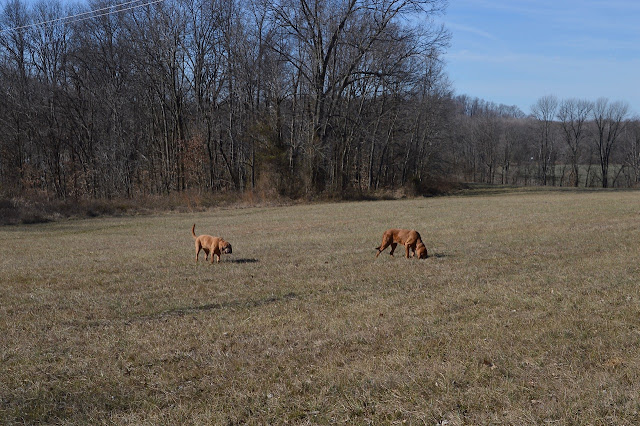 Sadie saw I was getting too far ahead and came toward me in a full out sprint. I was lucky to catch her with ears flying and both front paws off the ground. This will rank as one of her top pictures out of the 8,000 I have taken of her. That number does not include the pictures I took her first two years and lost them when I reformatted my Windows PC, thinking I had backed up the week before. 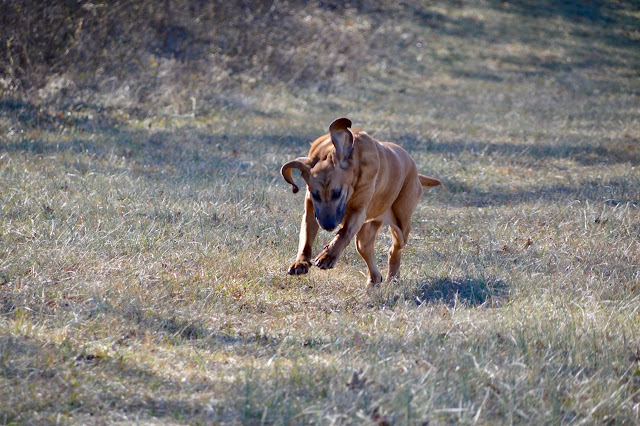 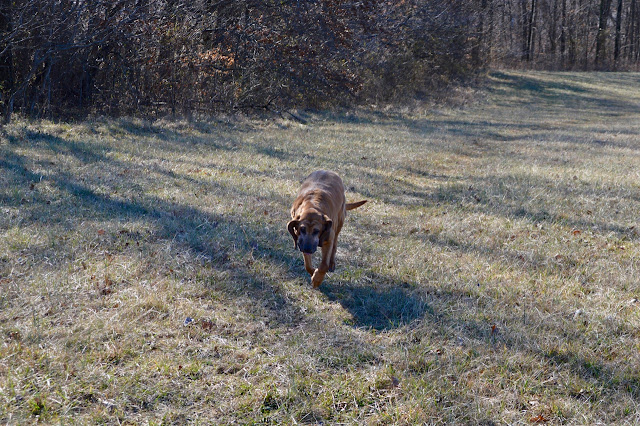 Sadie decided she was going to stick right next to me for a while so I wouldn't get too far away. Stella was oblivious to any kind of life outside of the area her nose and mouth occupied. 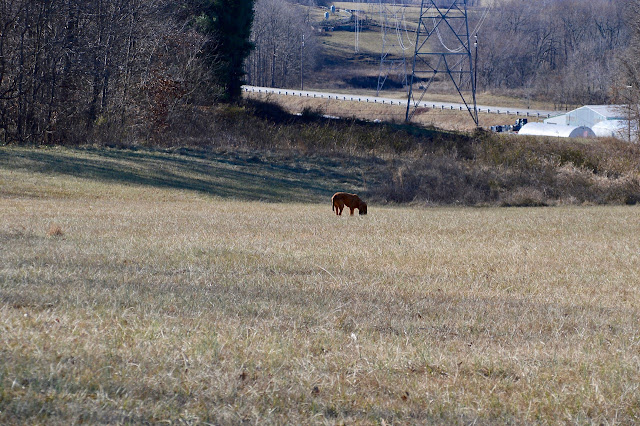 This is a distance picture as we make the final turn and head for home. You cannot beat a day like today for the month of February. 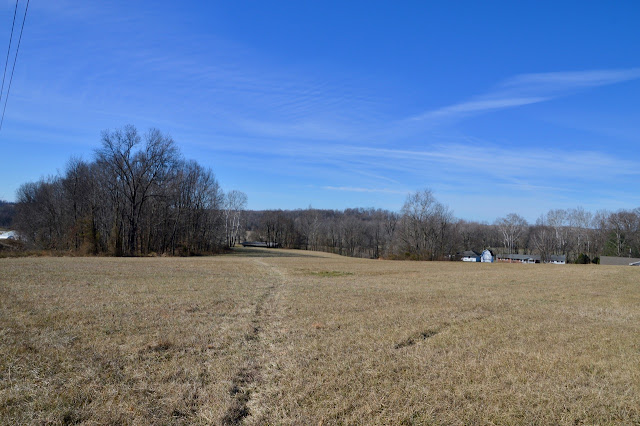 For a split second I thought of walking and not saying a word, even back to the house without Stella, thinking I'd come back outside and hook her up to the leash over by the neighbor's woods. I didn't want to do that today so I called her name a few times and never got a response.

Sadie and I headed over to her and about 3' from her she lifted her head and started trotting in my direction ... right past me. 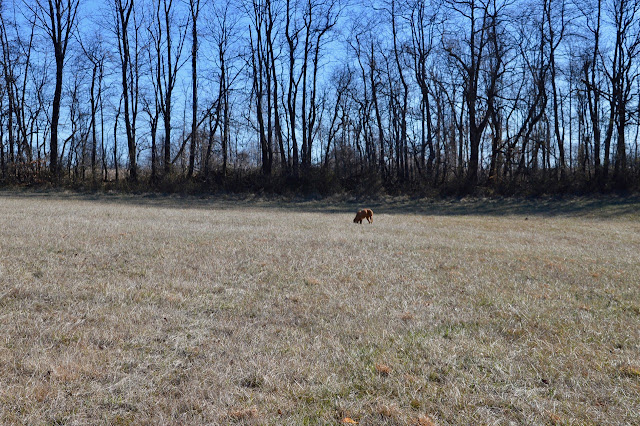 With both of them still pretty far ahead of me, Stella kept stopping and looking in the direction of the woods. Had the neighbors laid out some kind of food for the few animals that wander at night? Or did she smell that unidentified animal she chased a few weeks ago.

Whatever it was, she decide she needed to sit down and analyze the situation before I got up to her. 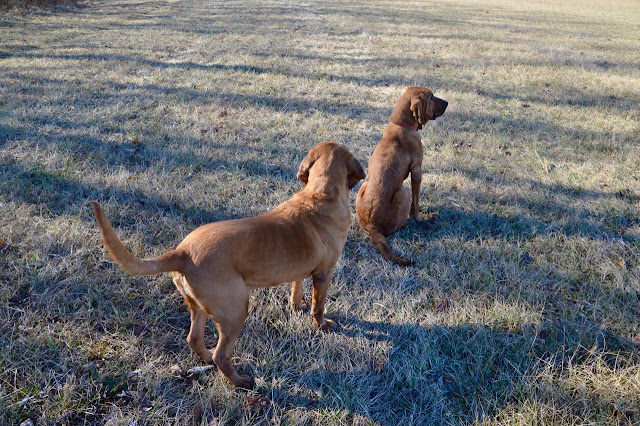 We moved on, but she was still curious as she faced that direction while she walked away from the woods. 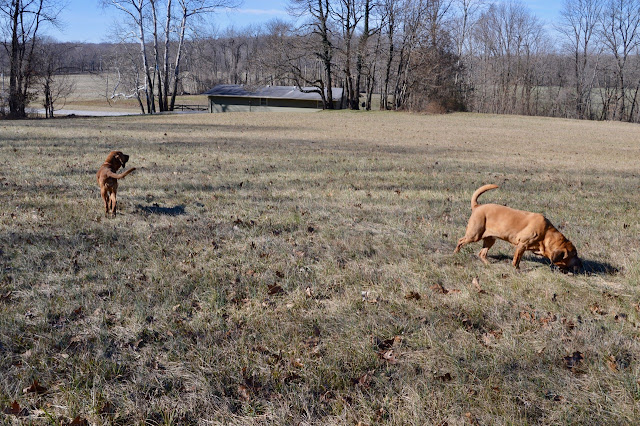 All I needed to say was 'milk bone' and they took off sprinting for the house. I don't feed them that brand name of bone but one with no grain and made with peanut butter. They know what I am talking about when I say those two words. We don't have them every day but enough to where they never forget. 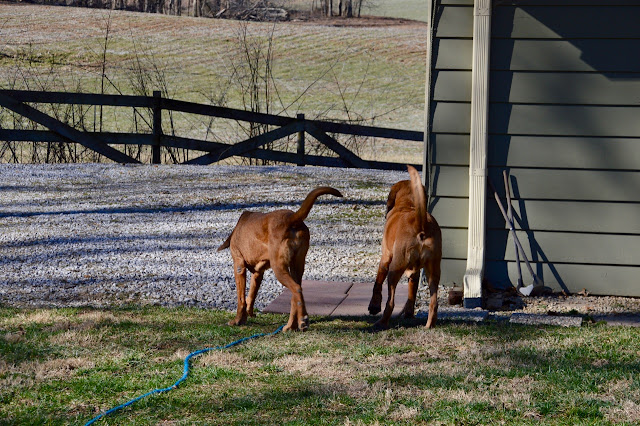 I spent the rest of the afternoon cooking a large pot of beans and then some cornbread which I baked inside a cast iron skillet. I have a couple of ballgames I'll be watching tonight.

I did not take the camera with me on our afternoon walk. It was colder so I wanted to make it short as possible. We walked the full distance but I had Stella on the 25' retractible leash.

Are you a true fan of a team if you have been kinda hoping your team loses games this past month and for the rest of the season, so it increases the chances of the coach being fired after the season? That is where I and a lot of alumni are at right now this basketball season.

You may have noticed I have added a new blog on the sidebar, named Bedlam Farm. I have disagreed with Jon on some things over the years yet we have found common ground after exchanging a few emails. He has a lot of great photography and information on his blog. He will usually post 3-5 times per day, has readers from all over the world in the millions of viewers.

He is a professional writer with over 26 books on dogs, and a few about the farm animals he has on his farm in upper state New York. Like he says, he is not a farmer but a writer living on a farm. He blogs honestly, very open, at times direct, and at times he will cause controversy. His comment section is closed because he gets enough of those comments on his Facebook account.

Anyway, I thought you might be interested in is blog and decided to add it to the sidebar today.

I am still debating in my mind whether to put the link to the site I blogged about the other day, PuppySpot, up on my sidebar. I do have a basset rescue site I've used up on the left sidebar and this site would be similar except all of their puppies are for sale.

I know that the link to the old VW buses site has nothing but VW buses that are for sale but I posted that link mostly for readers to be able to view them not really buy them.

I have always stayed away from posting links to different sites that dealt with hounds or cars. I have had a surprising number of people ask me in the past if I would link their site, where they are selling something. I haven't done that because I didn't want the blog to turn into a blog showing things for sell. That is not the reason for this blog.

If I really wanted to do that, I'd monetize it by setting up a bunch of affiliate links and maybe even a 'donate button' for the hounds, collected by PayPal. Not interested.

I think I will just stick to writing about the hounds and a little about retirement life here in 'the tropics' of southern Indiana.
at February 15, 2017