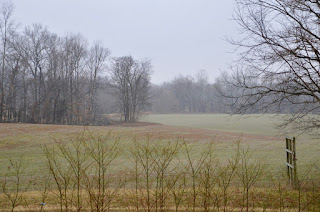 I was happy to feel no pain or soreness from my activity yesterday. You will read about that activity toward the end of this long post.

Yet, it was still dry enough for a morning hound walk. The daily routine did not change with hounds outside first thing in the morning, while I pour their morning kibble. While they eat I make coffee for myself. Then a short trip outside for Sadie and Stella while Heidi always heads back to bed after her breakfast.

I am not sure why my early morning pictures seem to be blurry on a consistent basis. I normally would not post something this blurry but these next two pictures of Sadie were too hard to pass up. 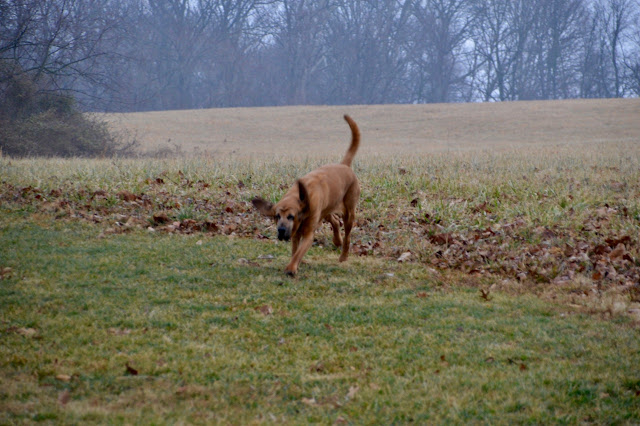 Even though she had just came back inside, as I sat down in front of the computer with my first cup of coffee Sadie was already giving me the stare down to go on the walk. She will sit at the entry way of my computer room, staring at me and not moving a muscle.

Once the two cups were done and I had seen enough information online, it was time to head out. I wondered how it would work out with Stella because I had forgot to put the leash in my pocket this morning in case I needed to use it for her. 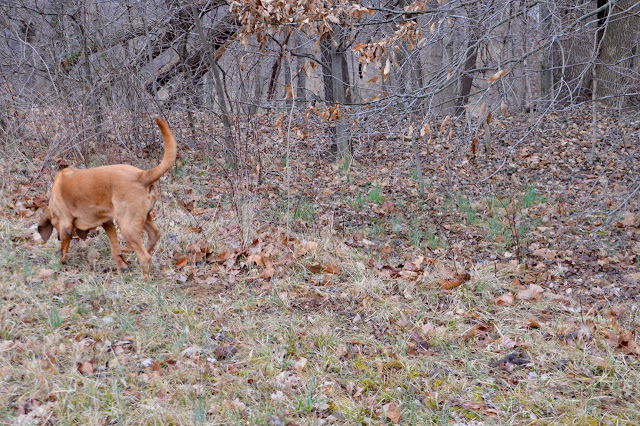 You can see the early signs of spring popping up through the leaves from last fall. The landscape business owner told me yesterday it was still to early to do what I wanted to do as far as killing grub worms and fertilizing the yard. 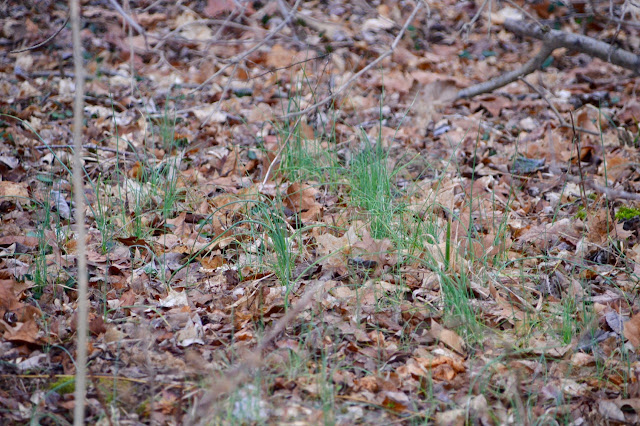 Stella started out the walk in the lead with a bounce in her step this morning. She lagged behind just for an instant before she came trotting to catch up with Sadie. I have to admit that was a good sign. 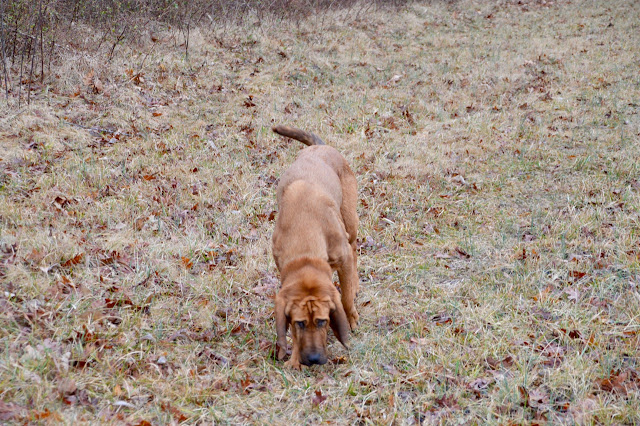 I wish I know what the cause of her scratching is. I cannot find any fleas on her but for the past month or so she has been doing a lot of scratching, both inside the house and outside in the yard. 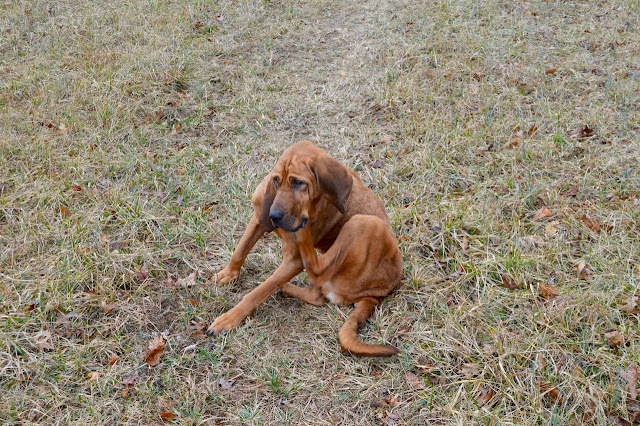 Both hounds were really active this morning. There must have been a lot of deer activity last night while we slept. Heidi decided she needed a day of rest after her first walk of the year yesterday ... she raised her head when I asked about walking but immediately moved it back under the sleeping bag. 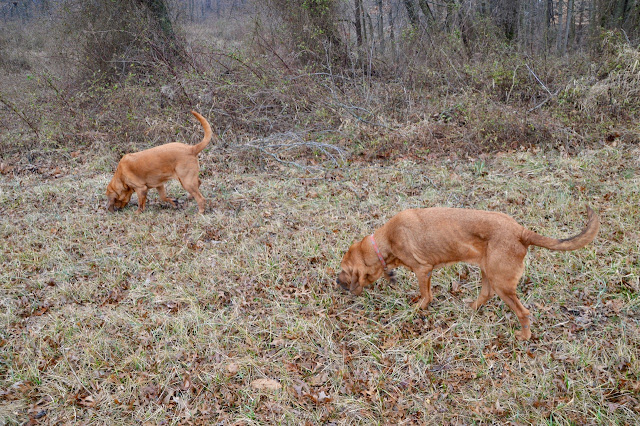 I was planning to take the right turn to the far corner this morning but something happened I was not prepared for. I had to run a little to make sure the hounds didn't take off on me because they were headed down into the gully. 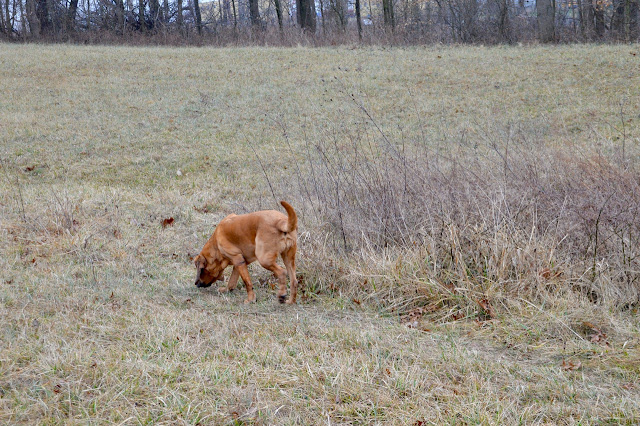 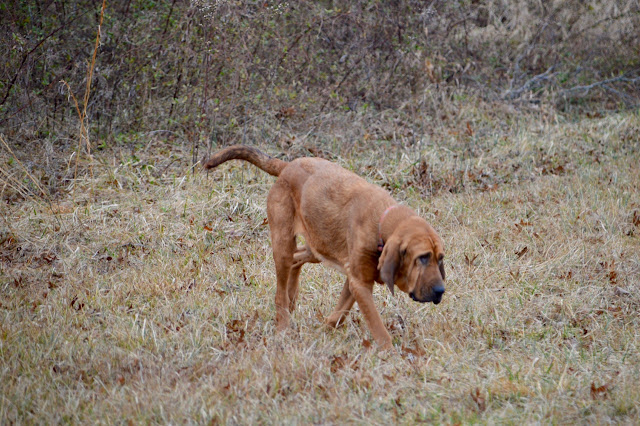 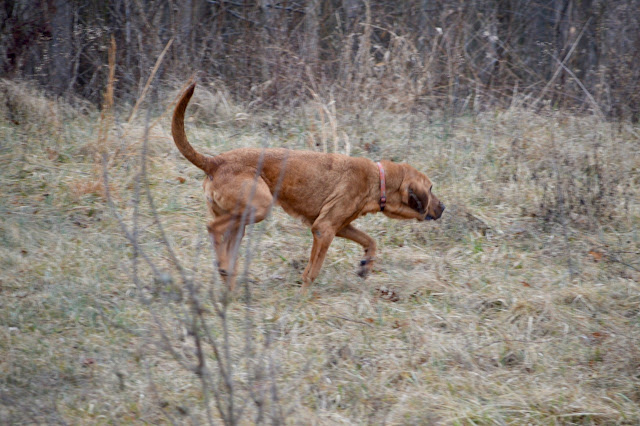 Once again I apologize for the blurry picture but wanted to show you where they were headed. They had just turned around and ran toward me when I called them as I took this picture ... but both of them were on that path behind Stella, the tan area, and were far enough 'down' that path I only saw their tails when I got to this point. 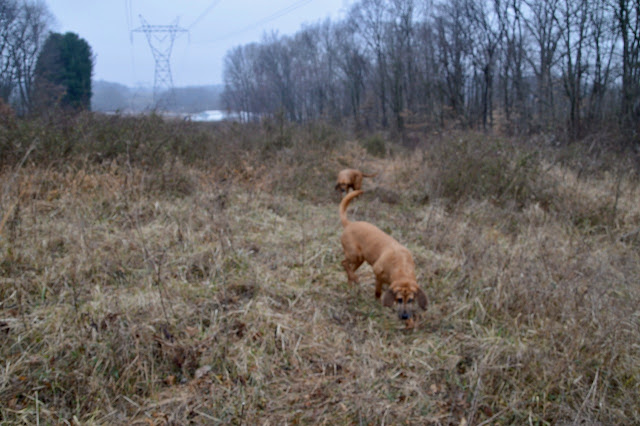 They sprinted past me like nothing had happened. When I saw them going down that path they would have been gone if I had not yelled their names. 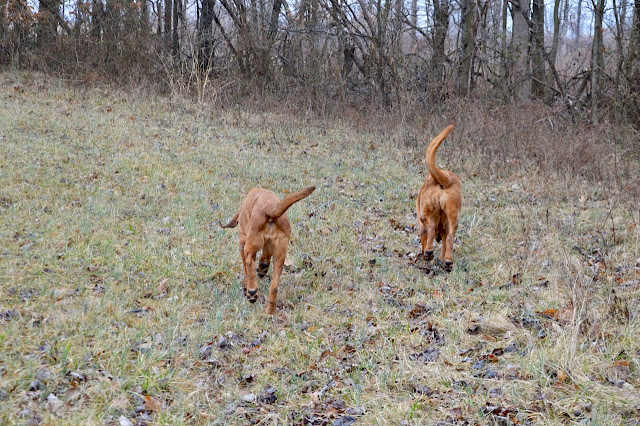 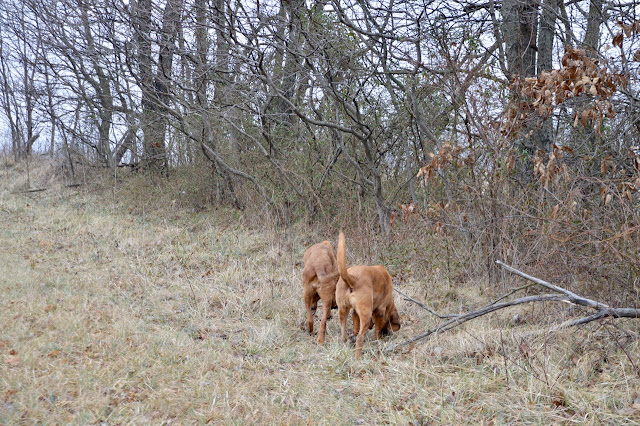 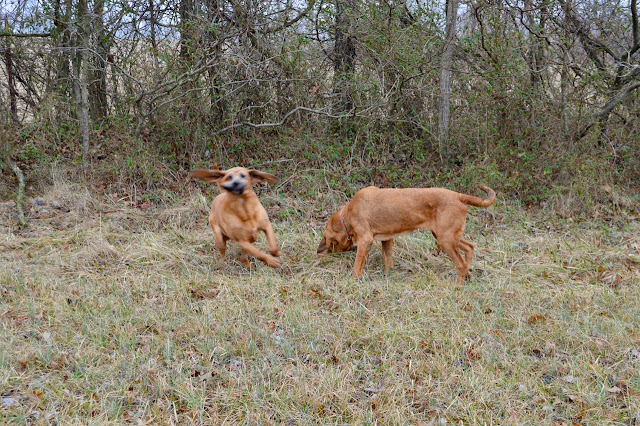 Both of them picked up another track out in the field to the right of my path. It had to have been a strong scent because both of them were moving at a pretty good clip and very focused on what they had found. 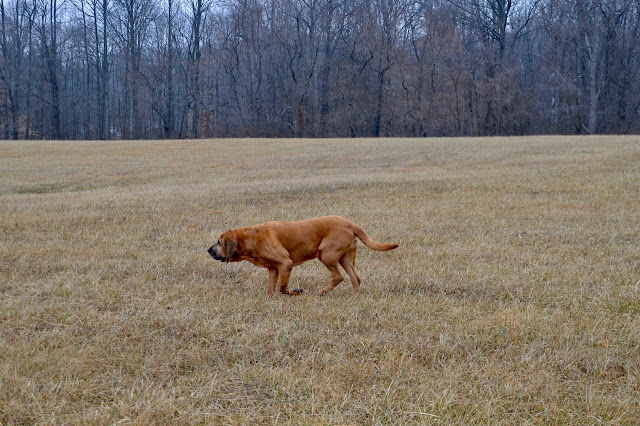 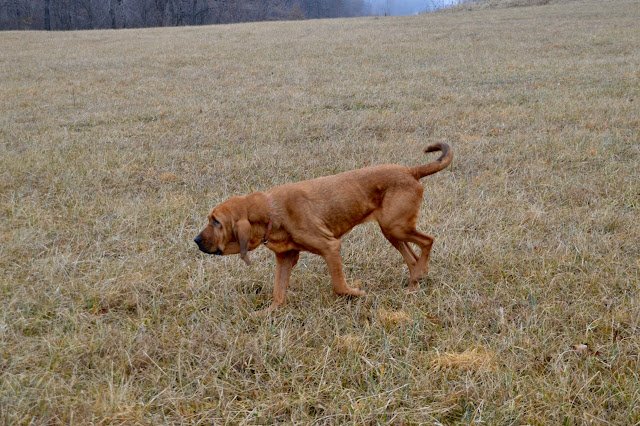 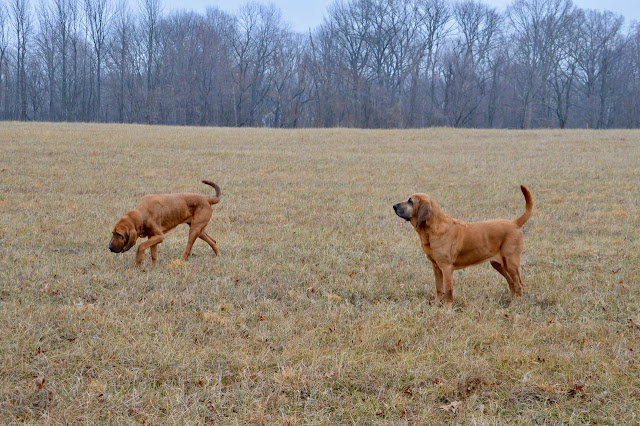 Stella reluctantly ends the walk and heads back home. Soon after getting back inside the house both of them were sound to sleep with Sadie already in the snoring mode. Heidi was still invisible under the sleeping bag. They will all sleep until lunch is served. 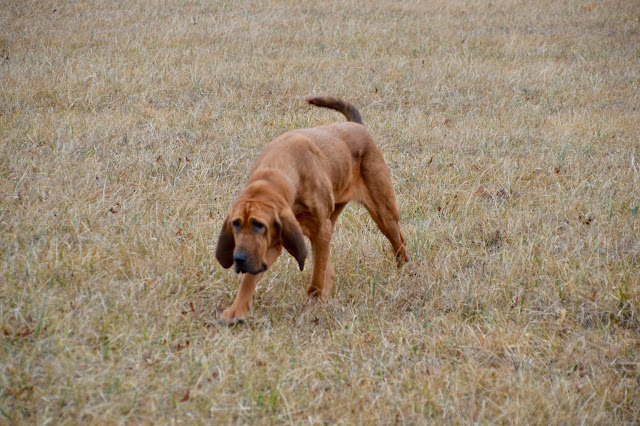 I decided to flip parking spaces last week and put the Mini Cooper Countryman on the outside, smaller space. Even with a car cover on the Z4, it would still get hit with any kind of rain in strong thunderstorms or that stuff we have not seen much of this year, called snow.

Once I had it in that spot I could tell just how much larger it was than the Mini Cooper S 2-door I had last year. Granted the black car is zoomed in a little more than the silver car but I think you can still see the difference in size. They say this Countryman model is very close to the BMW X1 model. 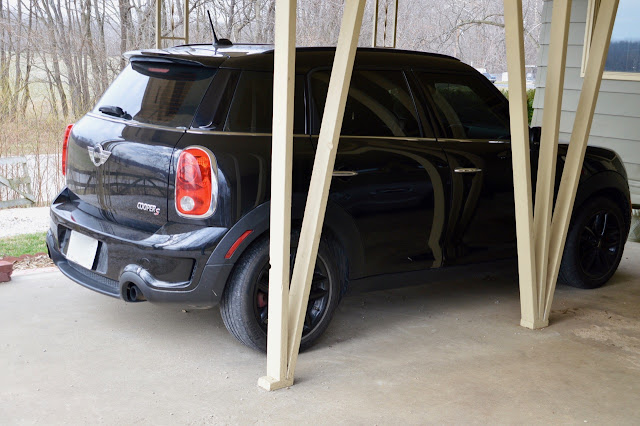 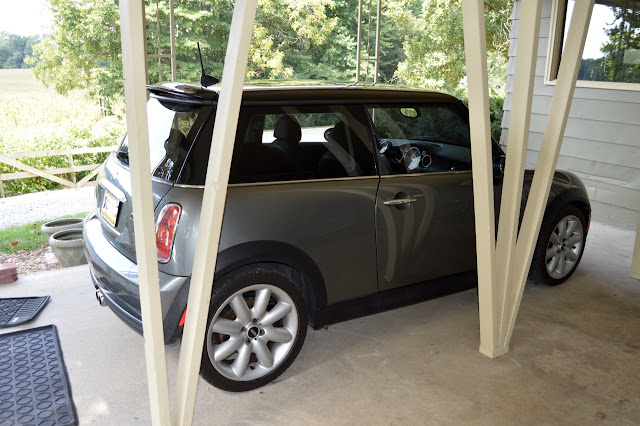 You will notice a large long dent in the aluminum siding under the window. I caused that with a true senior moment. I cannot remember how it happened but I do remember what happened. I had the silver Mini Cooper running and I had just stepped out of the car with the door open ... when the car took off !!!! I had left the car in "drive" instead of "park".

I was able to close the driver's door just in time to prevent it from hitting the rod iron in front of it while the car drove into the house. That dent was from the front bumper and shows just how fast the car was going when it hit the house.

Luckily in my small shed is a box of yellow aluminum siding left over from 1975. I have found someone with more expertise than me in siding a house, that will come over and take that bad piece out and replace it with new. There will be some cutting involved and is a project I would rather pay for to have it done correctly.

I mentioned yesterday that it would be nice enough to be outside but not quite hot enough or late enough to do any kind of yard work or high pressure washing the fence. I ended up outside in the late afternoon after what I found around 1pm. I had a few questions about killing moles, when I could put on some grub worm killer etc ... Was February too early?

I headed to the landscaping business within view of the house to ask the owner not only those questions but if he knew anyone that had a pile of rip-rap, some concrete blocks or broken concrete they wanted to get rid of. I need to support part of my bank where the erosion is getting worse.

I was in luck.

He had torn down one of his portable greenhouses and had all of the large concrete pieces that I would want. The deal was as long as he 'didn't have to work' he would use the bucket on the front of his tractor and deliver the rock to my house.

He never has piles of rip-rap but does have high piles of mulch, river rock, landscaping stone. Luckily for me he also had a pile of rip-rap for sale. He wasn't sure how long it would last but he had a small pile of riff rack that he would deliver to my house by tractor. I picked up a couple of baskets for $20.

Sadie was inspecting the start of my work this morning. 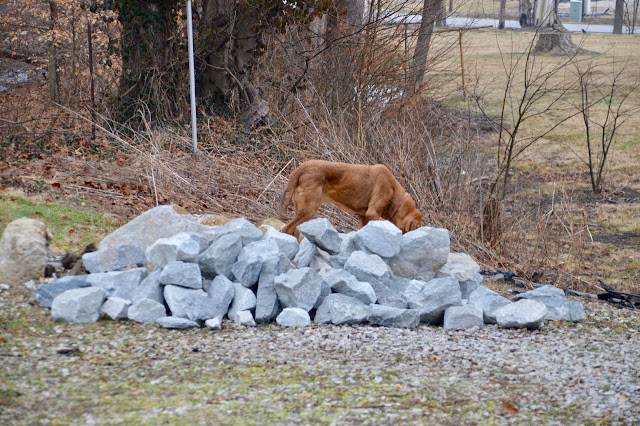 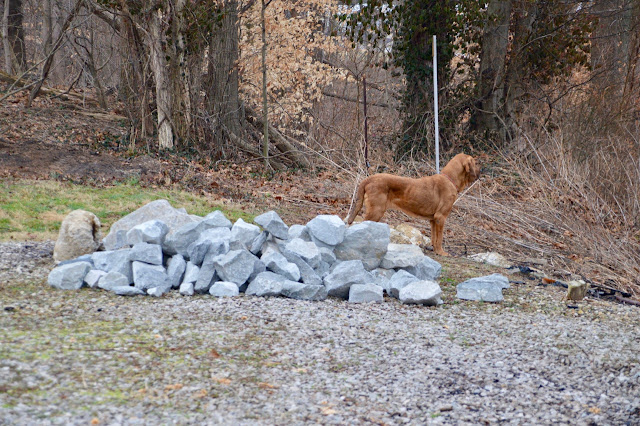 I thought I had describe to him where I wanted all the rock dumped but evidently we were not on the same page. That first load of concrete pieces were dump nowhere near the place I wanted. He asked me to go with him on the 2nd trip to make sure he was dumping it in the right spot.

The first trip he moved the burn pile into the ditch behind it and dumped those large concrete pieces with it ... not the place I wanted it dumped. 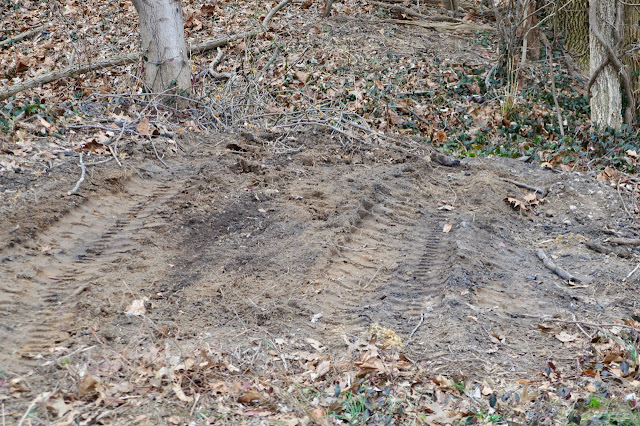 This is looking behind the burn pile and where my first load of concrete rock landed. 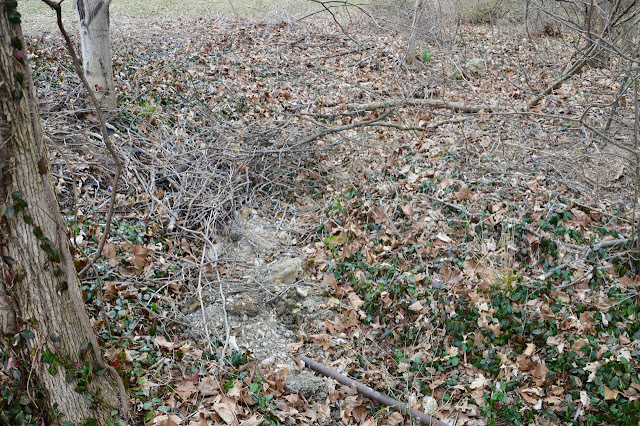 I brushed the tree limbs off of the rock and hand carried the larger pieces to the side of the bank that I need to support. From the angle the bank is going downward to the left. 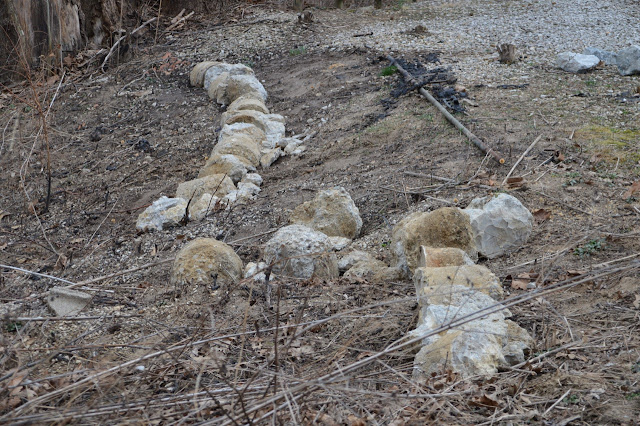 I'll wait a year to see how this works before I go to my original plan of having a couple of dump truck loads of mixed dirt, rock, gravel delivered and dumped on the bank. For 40 or more years this bank was full of trees. A few years ago the local electric company decided they would cut trees under their power lines and 10' to each side of center. Not only did they cut all the trees and bushes but cleared out the root system ... all which previously prevented erosion along that bank.

He did place the rip-rap where I wanted it. I am going to move some of the older concrete blocks I already have scattered along the bank into this one area in front of the fence between my driveway. Later I will have some additional driveway stone delivered to fill in a lot of that area between my driveway and the fence. 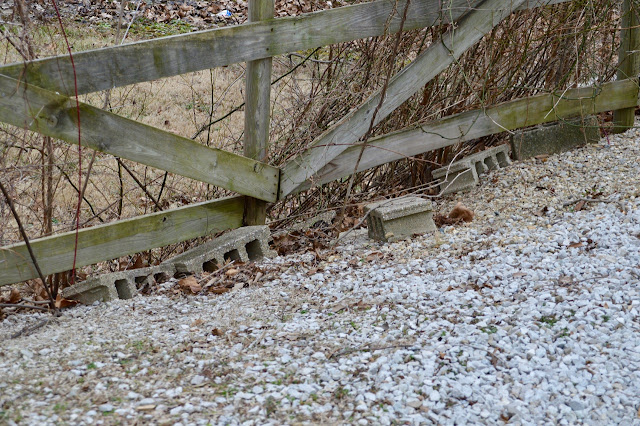 The rip-rap is going to be placed by hand on the bank right behind that fence post. I should have had him take both baskets of rock through the neighbors yard (empty house for sale) and put the rock right where I want to place it.

Now I have only two options ... load the wheelbarrow and take that down the drive multiple times, around their drainage ditch and to the spot I want to build up. With the incline of my driveway and the weight of the loaded rock ... I might not be able to get the wheelbarrow stopped before getting out into the highway !!!

OR ... I can take each rock and drop it over the fence one by one, into the area I want to build up ... then place them on the bank from where they land. 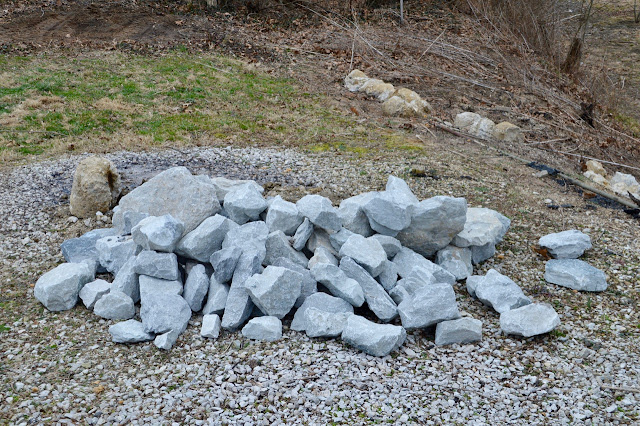 Not much is planned today. It's still warm. Any yard chemicals has to wait until late March in case it snows within the next 3-4 weeks. The war against the moles sounds like the lost cause as I aways thought it was. He has every product available for sale but has found nothing works that well. Living next to a field does not help my case at all.

I imagine I will eventually make it to that pile of rip-rap later today and test my "dropping" idea. That looks like a lot of trips, one rock at a time. Maybe using the wheelbarrow is the best option.

Again it's too nice to stay inside today here in 'the tropics' of southern Indiana.
at February 19, 2017