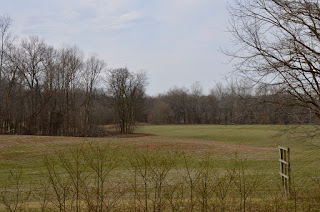 With DirecTv's 3 days of temptation (free movie channels) trying to get me to upgrade my account to the movie channels, it was a late night last night and a delayed schedule this morning.

By the time we got up, it was warm outside (60°), hazy and a change in schedule. The first walk of the day would take place before I even started any thoughts on coffee. I asked Heidi "do you want to walk with us today" and she went trotting to the door!

For readers that may be new and not familiar with Heidi's skin story, do a search in the upper right box "Heidi's Skin" and that will bring up her history, diagnosis and treatments. What might look bad is actually very good for her. Even better than that fence behind her, which I'll high pressure wash this spring when it's hotter and the sunshine can dry it out faster. 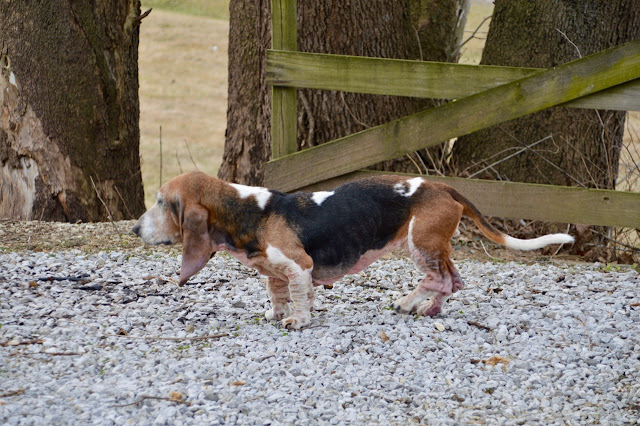 At first I was not sure if she just wanted outside to walk around or if she was really going to take her first walk of the year. It wasn't her liking of 70° but it was 60° so I thought there might be a chance that she would join us. 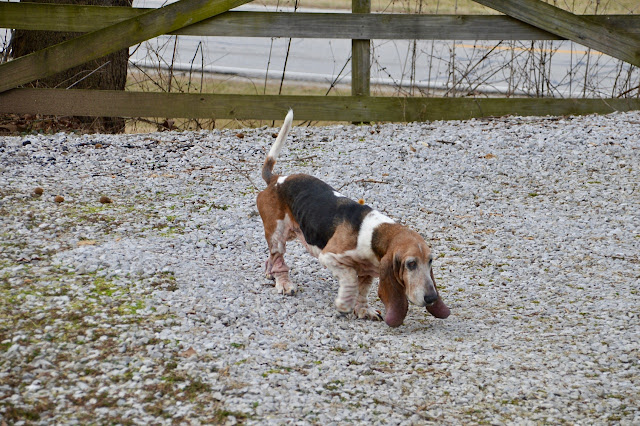 Getting closer to making up her mind. 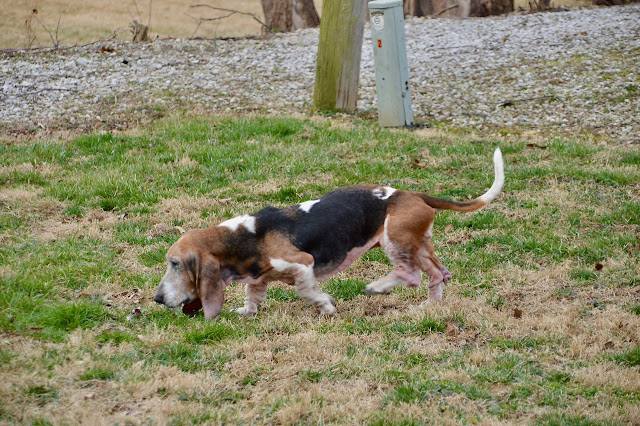 Then ... she gets on the path with her nose to the ground, ears dragging not far behind and she was off for the first time this year. Why is that exciting? I think her last walk in the field was sometime last summer, I'd have to look that up. 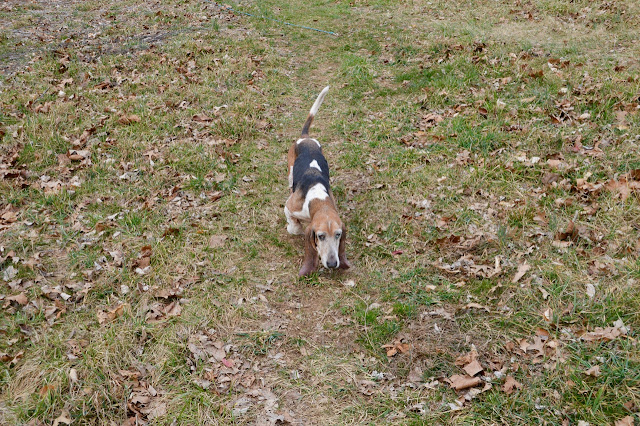 She jumped out into the lead while Sadie and Stella started their normal routine. It was good to see her exercise her nose and show some interest in the hound walk. 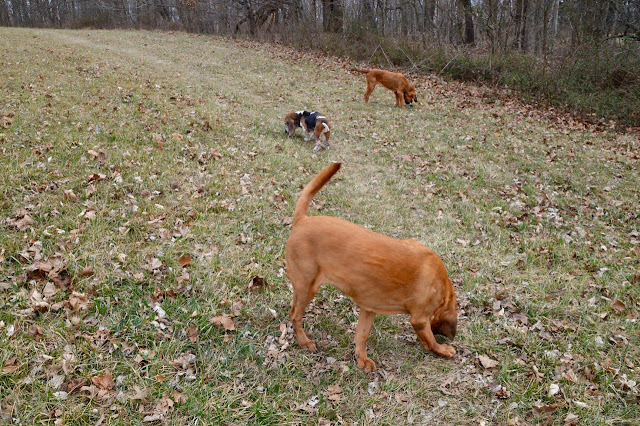 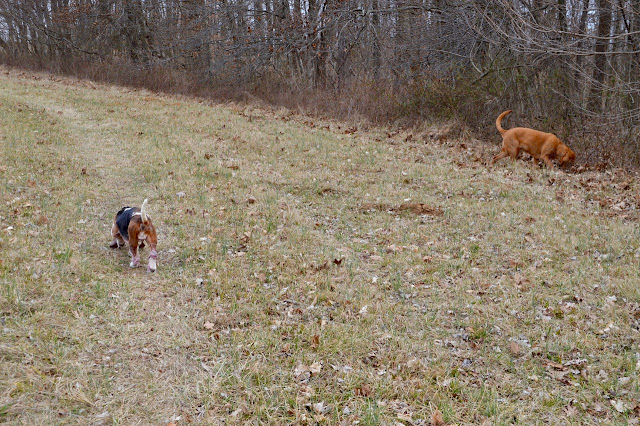 Stella was a little behind but had plenty of things to check out. 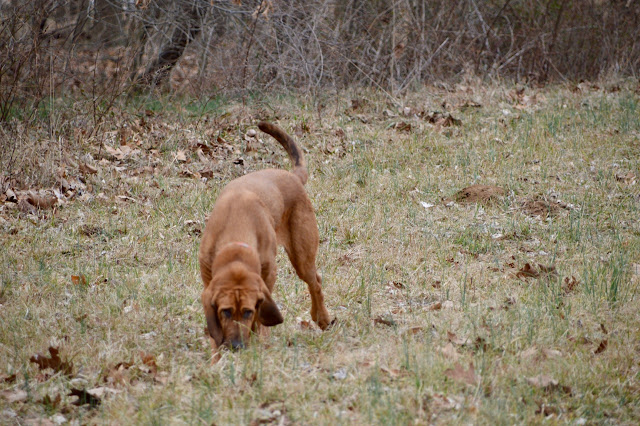 Sadie seemed happy that Heidi was out. I couldn't catch her with my camera but she would run back to Heidi on occasion to touch noses with her and then trot away from her getting in front. 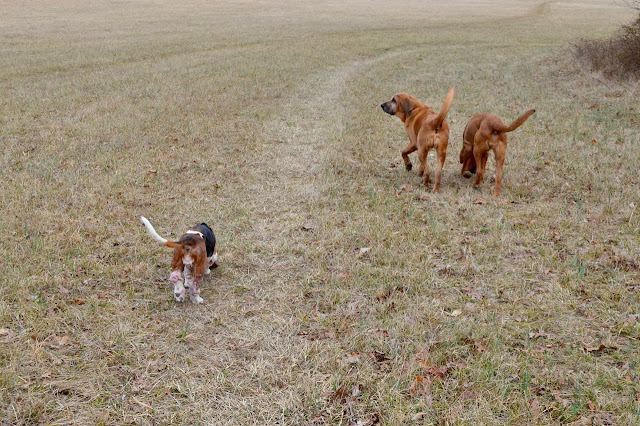 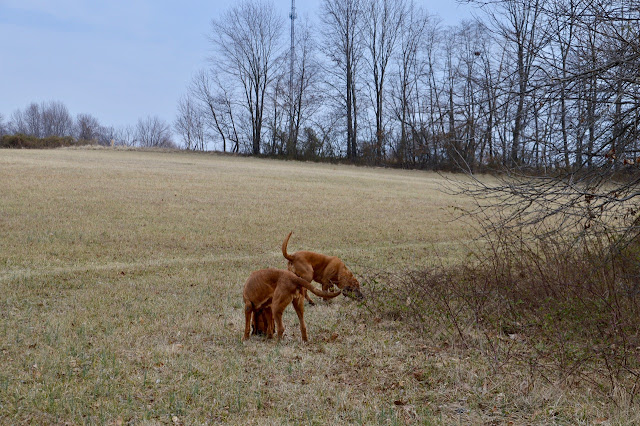 I have been feeding her almost 2x as much kibble as the bag says for a 35# basset hound for quite a few months but she hasn't gained her weight back. It was just a few years ago where all four legs and paws were bare and raw. The vet told me not to expect any hair to grow back on her legs, paws or stomach. At that time her legs were mostly raw skin up to where the brown color starts. 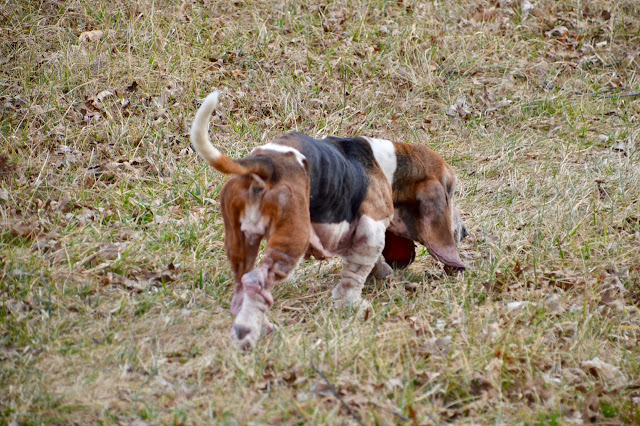 As Heidi followed the path, Sadie and Stella explored the edge of the field and I could tell they were headed for the far right corner. 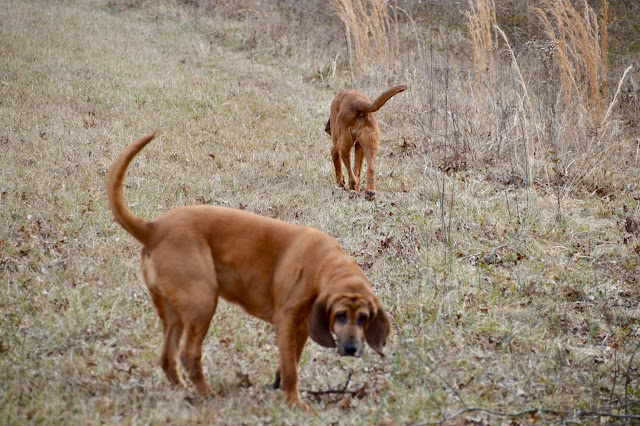 I've tried all the grain free food over the past two years. I have a huge photo file, dated where I can compare her skin condition photos with the same days a year or two in the past. Her skin irritation seems to be seasonal and only certain foods make her skin to flair up into bright red, itchy and raw.

She has done the best on the recent change to Rachel Ray Dog Food, dry kibble with grains. Her coat is soft and shiny and not greasy like some of the other grain free food would make it feel. The skin that is bare is not hard and sore but very soft, supple and close to a normal skin tone. 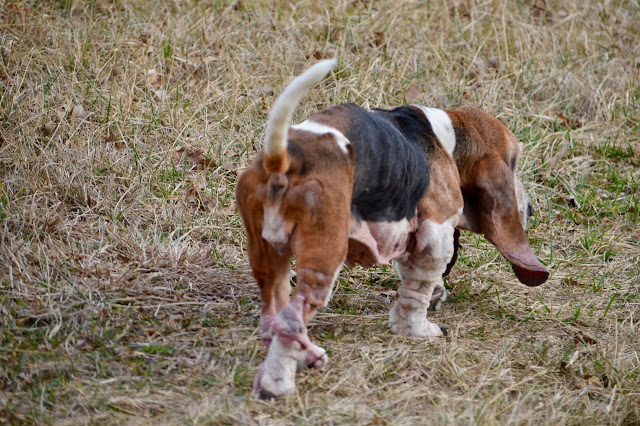 Heidi and I continued along the path while the two partners in crime checked out their far right corner. They heard nothing nor saw anything as their faces were buried in the thick brush. 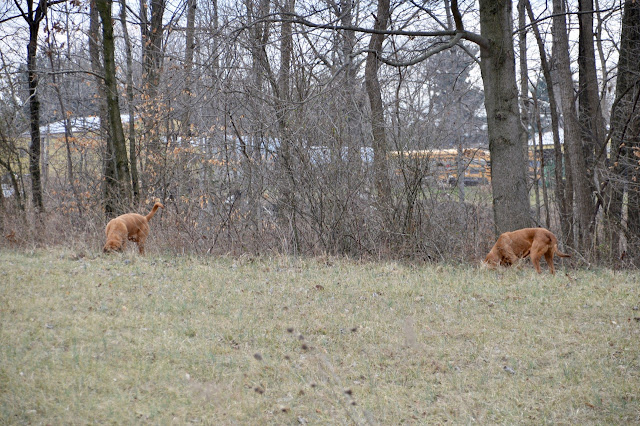 This next picture is just after Sadie had sprinted over, and touched noses with Heidi. 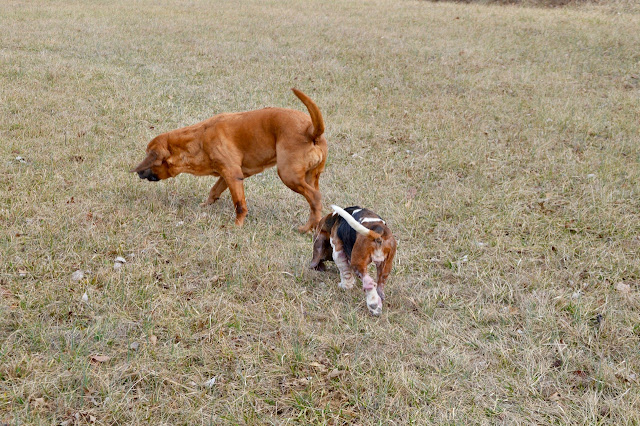 While we made the final turn heading back home, Stella was still in the corner of the field. About the time I thought I might have to walk that direction to get her, she started trotting our direction after I called her name. 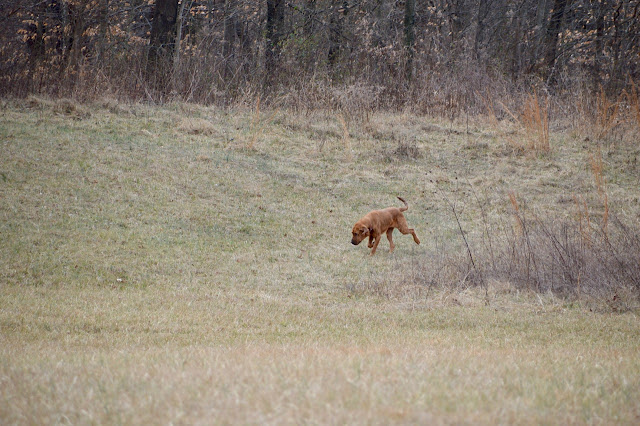 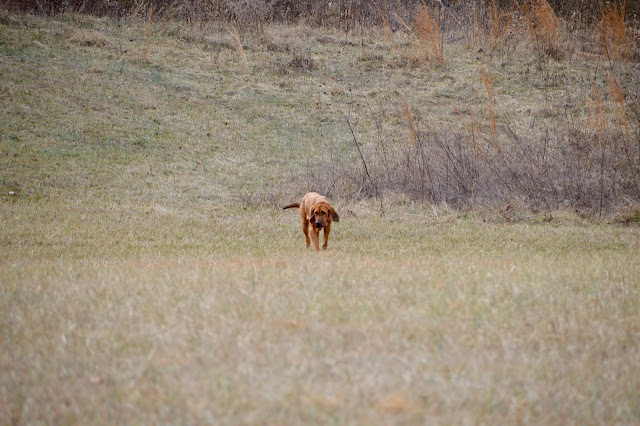 Heidi continued to enjoy her walk. The camera doesn't catch it but her tail was wagging from left to right as she had her nose to the ground. At times she would break into a trot but stayed on the path most of the way. 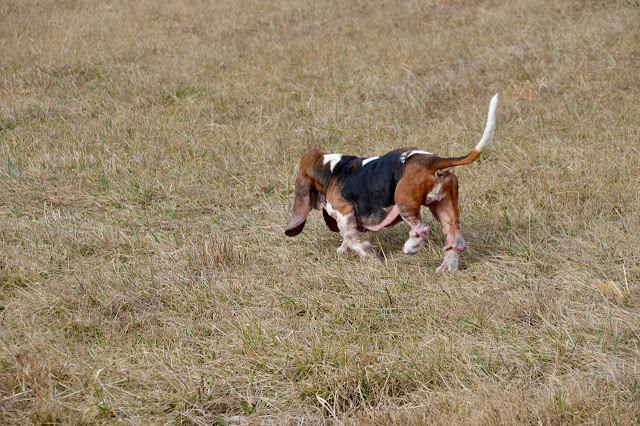 I had noticed this morning she had an eye that looked like she had a cold, with some mucus buildup. I'll keep track of that in case we need to make a trip to the vet for some antibiotics. She decided to clean out her left eye on her own with some nice dried cut hay. 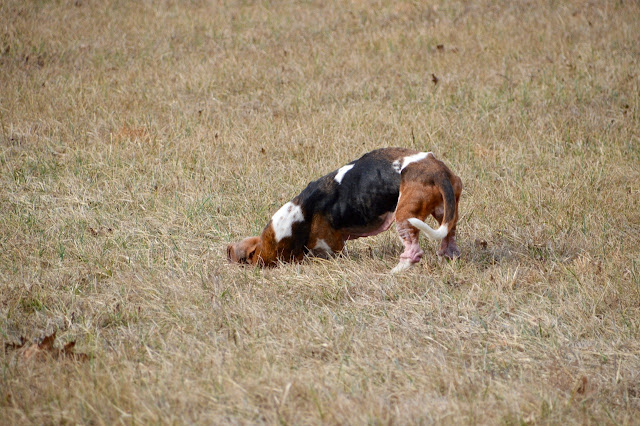 Her nose is as good as Sadie's and a little better than Stella's I think, just by the way she acts and the rabbits she has flushed out of the tall hay in the summer in years past. 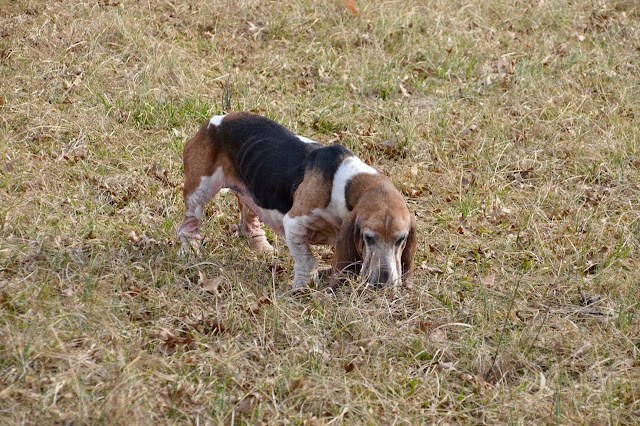 The basset hound is suppose to have the top half of their tail white, so they can be seen in tall grass during the times they hunt for rabbits. The long ears dragging the ground will kick up the scent, keeping it in front of their nose. For those that don't know, she had a history as an escape artist (a runner) leading to a lot of trips to the animal shelter. Guardian Angel Basset Rescue, rescued her from the shelter and put her up for adoption after a detailed vet inspection in June 2011. 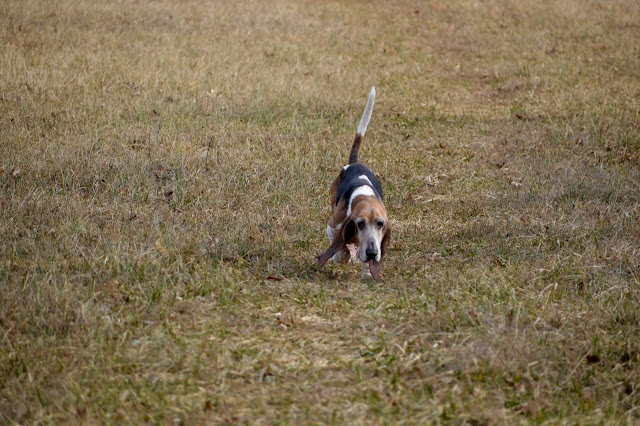 It's really good to see her out in the field today enjoying the walk. She spends most of the winter under a sleeping back or blankets sleeping her days away. So many hours like that where at times I wonder if she is healthy or not. 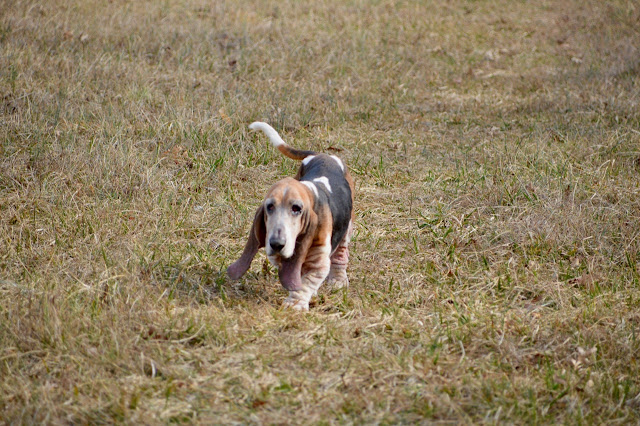 With no positive birth date since she was a rescue, best estimates say she was 8-9 years old this past December. 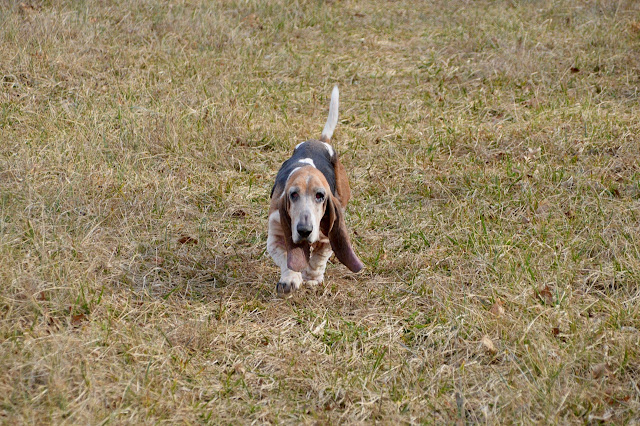 Sadie walked next to me most of the way home, out of camera range. Not sure what that was for but Heidi led the walk home and Stella wasn't that far behind. 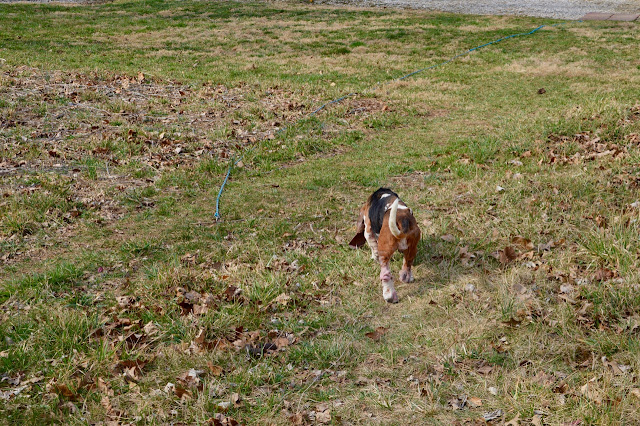 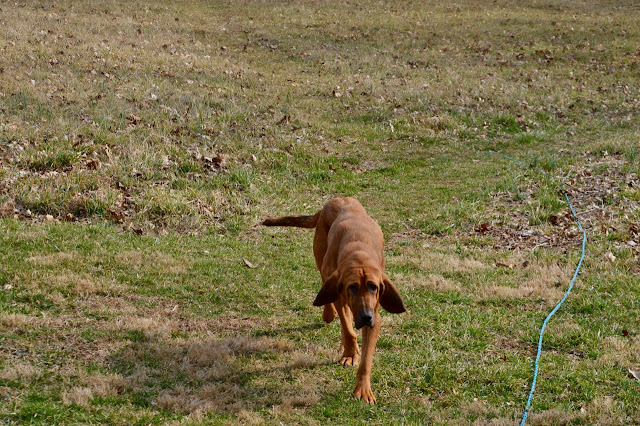 It was so nice this morning I almost pulled out the high pressure washer to clean the fence and the house but I want to do that in April when the days are warmer so things dry out faster. We will probably get a couple of more walks in today, but that might just be the bloodhounds and I.

Too nice to stay inside and not enough to do outside as far as tasks ... might sit outside and read while the hounds explore.

Is it really February 18 in 'the tropics' of southern Indiana with weather like this?
at February 18, 2017