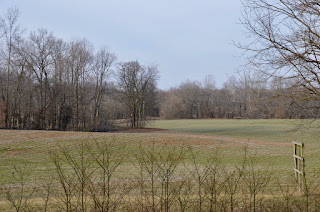 I finished my book around 1am and headed for bed expecting great weather today. I woke up to a bright sky full of sunshine, mild temps headed for the 50's so things were off to a good start.

Same routine as always. Sadie decided to check the air temp with her tongue. Not many can touch their nose with their tongue, but she finds it quite easy.

It's Super Bowl Sunday but I cannot say the excitement I had years ago is there today. I have not listen or read about any of the pre-game hype for the past two weeks. I'll not turn on the tv until right at kick-off. As far as the food plan for today and tonight ... wow, that has really changed in the past couple of years. It use to be an eating feast. 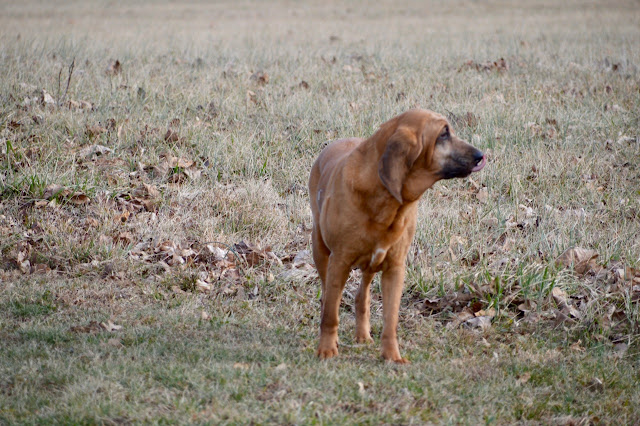 It was my own personal decision to change my diet and non-stop eating during ballgames. I needed to lose some pounds but wasn't obese. I mainly wanted to stop the constant indigestion and stop my addiction to straight original blend Pepsi. In the past Super Bowl Sunday's it would have been non-stop eating starting with a breakfast of a 3 egg omelet loaded with cheeses, mushrooms, a little onion and cilantro. While I would eat that my first large waffle would be cooking. 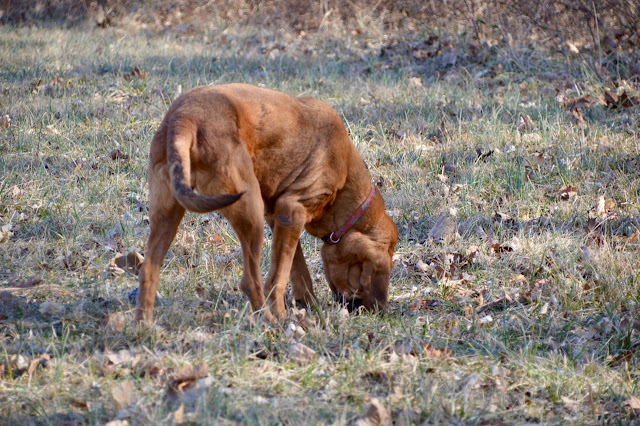 I'd have at least two them and most likely three, heavy on the butter, peanut butter and thick syrup. Although my hunger would be gone that didn't mean I'd stop eating. By noon college basketball games would be on with the Super Bowl to be later in the afternoon and then evening when the NFL decided they could make more money by showing the game later. 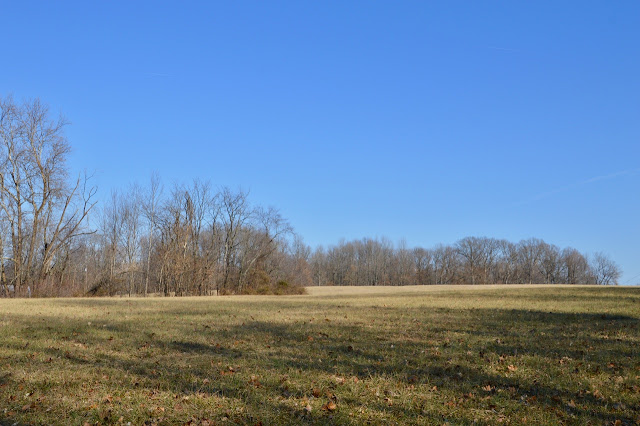 So even with a full stomach from the large breakfast, a walk with the hounds and for me ... I would move into the lunch mode a few hours later with all the chips, dips, meats, breads, baked beans, potato and macaroni salads I could set out on the kitchen island. It was a constant eating fest during the afternoon. 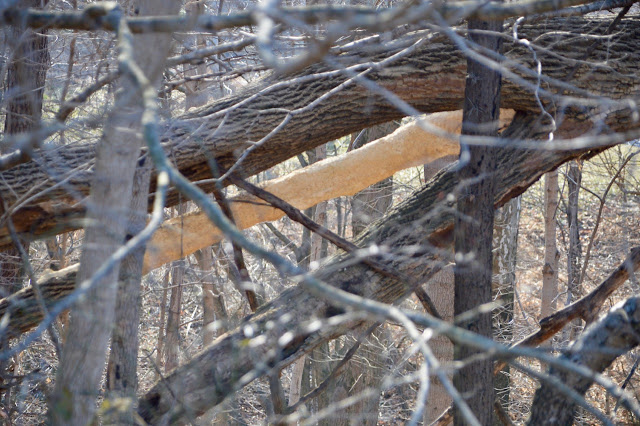 By late afternoon and getting closer to the main attraction I would start thinking about the dinner menu even though I was stuffed to the gills. I may have had a siesta to prepare for not only a 4 hour game but more eating throughout the evening. The grill would be fired up with plans of steak or salmon, sometimes both. It was a full day and night of food consumption. 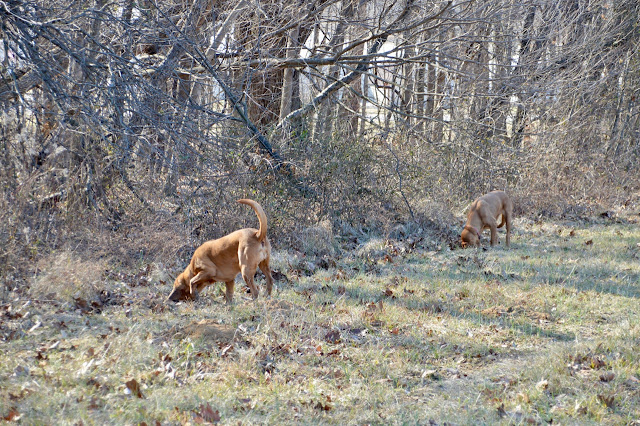 Plus I couldn't watch a game without chips, salsa, cheese dip along with Pepsi throughout the afternoon and night. I would also eat that way every Saturday watching college football in the fall.

But in May 2015 I made a self imposed drastic diet change and eliminated my indigestion problems immediately. I also lost 20 pounds, 3" off my jean size and the mucus that was always a constant sinus issue was gone. So compared to all I have just listed for meals in the past, this year it looks like I will do what I did last year.

An egg, one slice of wheat toast for breakfast along with my normal two cups of strong coffee. A large salad for lunch and then dinner before the kickoff will be either baked chicken breast, brown rice and salad or salmon instead of chicken. Pepsi is no longer a staple in the refrigerator and drinking ice cold water seems to have filled in nice as a substitute. 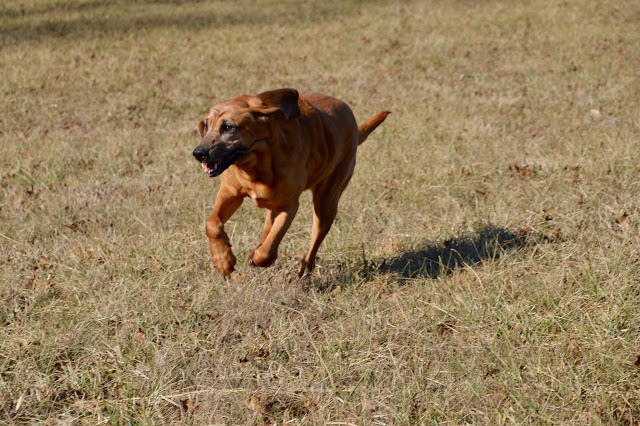 Overall we had a great morning walk this morning. The weather was great. Sadie got a lot of running in, more than she normally does. Of course Stella wasn't around. Today Stella ended up going to far and put herself on double secret probation. 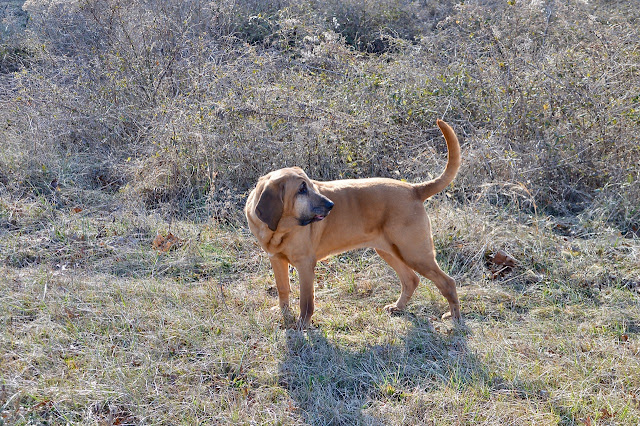 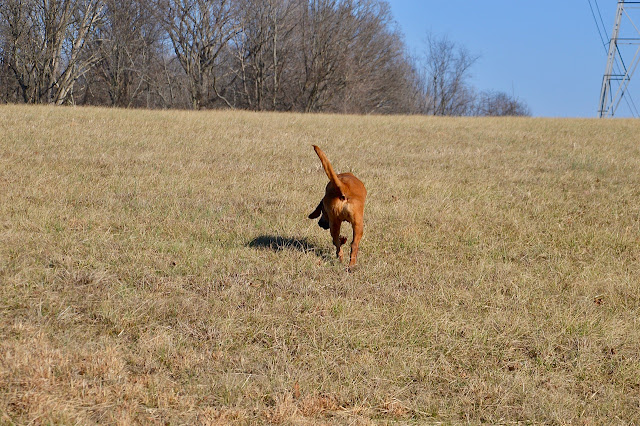 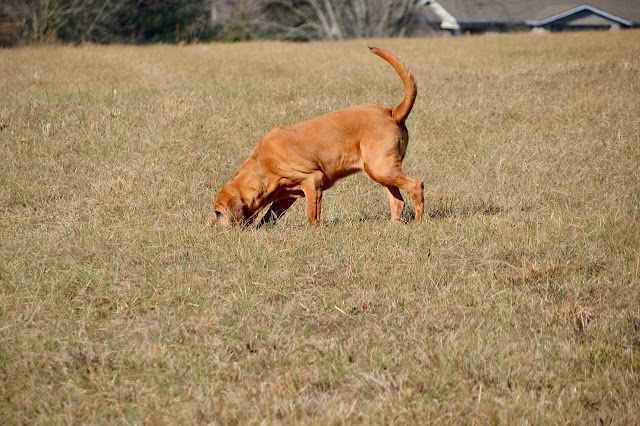 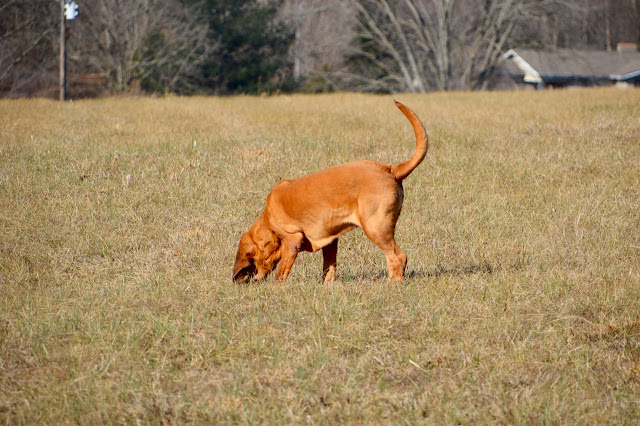 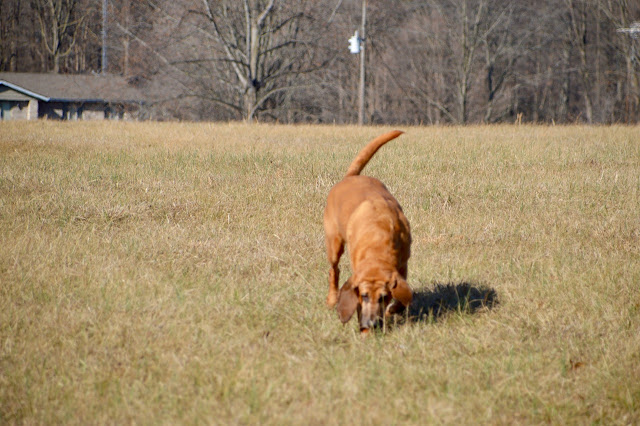 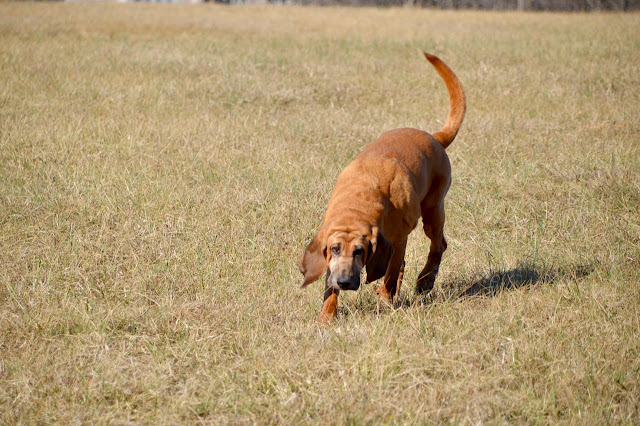 As I glanced back toward the house I saw Stella had moved out to her new normal spot. I continued to walk, Sadie continued to run back to me and then circling the middle of the field. She was having a great time. 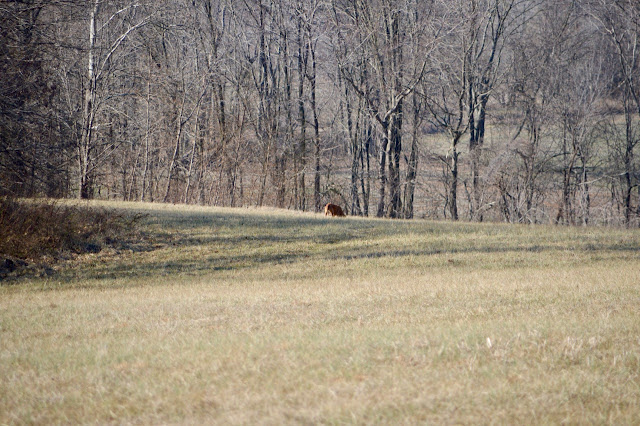 It changed for Stella though and something I wasn't happy with but not surprised. I knew eventually she would head for the wooded area behind the neighbor's house. It may not seem like much different but if she goes that far, she will gradually move that limit out further and further. 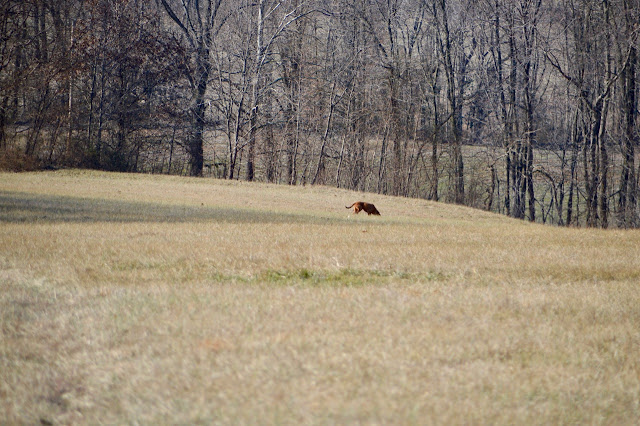 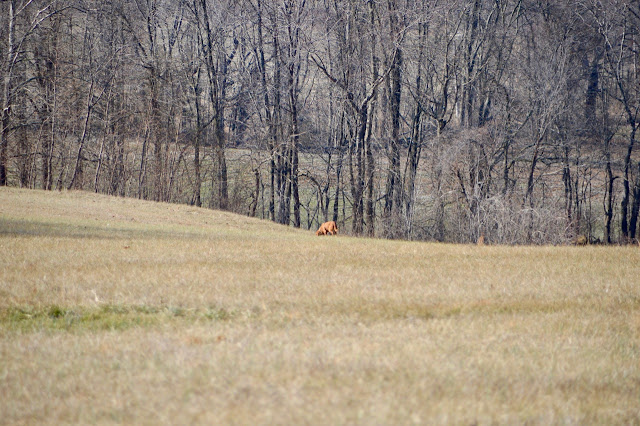 I was pretty sure when I saw her migrating to the woods that I would have to attach the leash to her. It was folded inside my pocket. 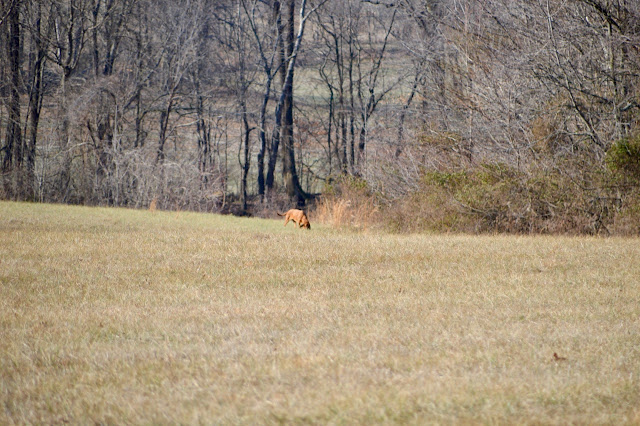 As we walked toward her I wasn't happy about this situation. Especially as she would look up at me, hear me calling her and then keep walking more toward the woods. 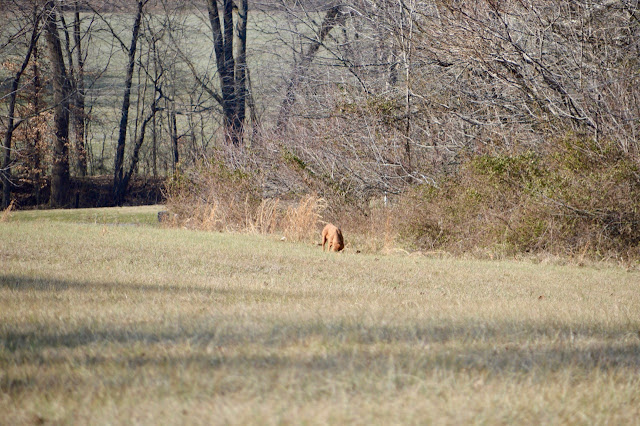 Sadie and I veered toward her, still calling her name. Believe it or not, she started walking toward me slowly. I was beginning to think the leash was not going to be needed and that she would walk right up to me ... yea right. 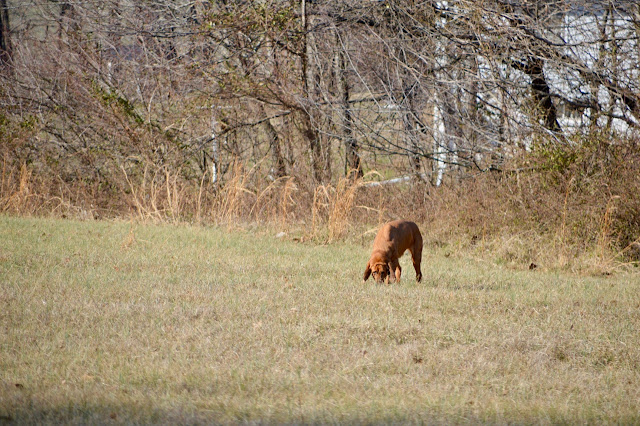 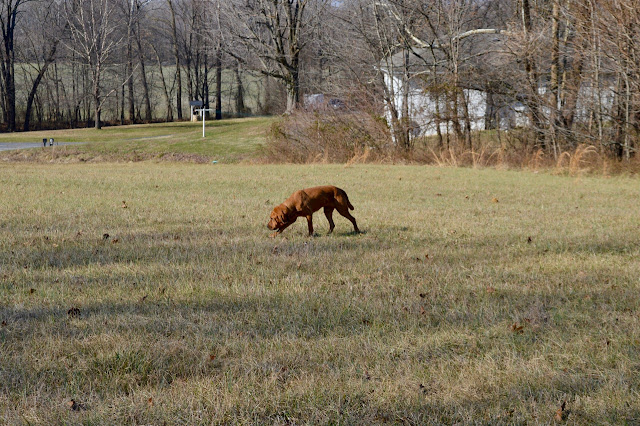 Then typical Stella ... actually somewhat funny ... about the time she walked up to me with the leash still inside my jacket pocket ... she turned and started to walk away. 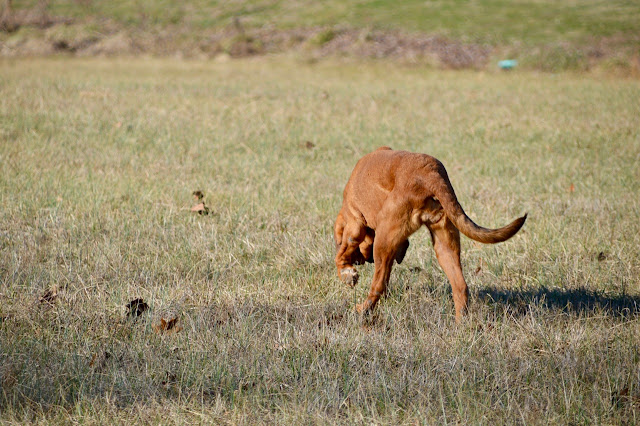 That is when I pulled the leash out, connected it to her collar and dropped it to the ground. She walked beside me all the way back home. Sadie in the was on her own and made it back home before I did. 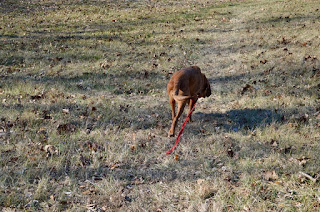 I am going to start another book and probably read until the Super Bowl. It's hard to believe it is the 51st game. Time flies I guess when you are having fun.

Headed for warmer weather here in 'the tropics' of southern Indiana.
at February 05, 2017