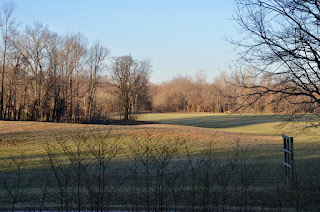 As you know I am a night person, if you are a long time reader. So it wasn't a surprise to me last night when I had the urge to go grocery shopping 12 miles away at 11:45pm.

That meant the hounds had to be woke up from their deep sleep and 'ask' them to move to the bedroom, where they stay when I leave the house. All three hounds reluctantly agreed but it sure did look like Stella was still in a dream state as she slowly walked toward the bedroom.

Of course whenever food is involved they are always wide awake and that didn't change at 12:30am while I unloaded the groceries. I could feel as I opened the door for the first time this morning that those predicted warm temps had arrived. The hounds loved it too, as they moved into a new area for them while I was inside making coffee. 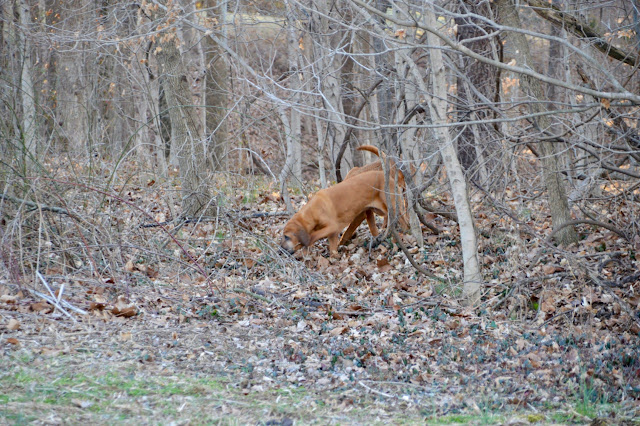 Once the brush grows back this spring, that pathway will be closed and solid green with wild berry bushes, thorns and tall weeds. They will not venture in that direction until next winter. Still it is a 'no fly zone' for them. 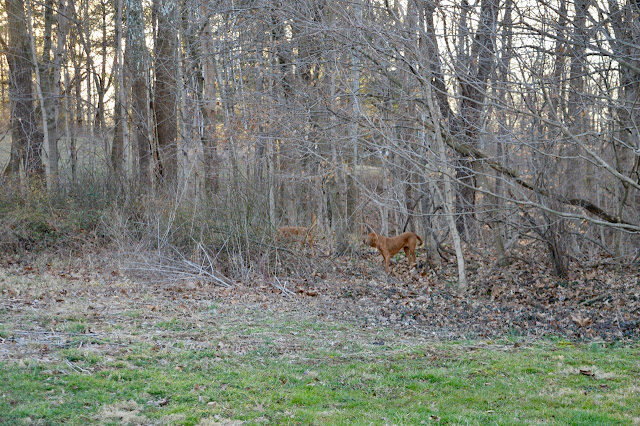 Stella finally walked out on her own but it took me many times calling her name before she would move. She always comes but she will take her own time doing it. Her DNA has a heavy dose of 'bloodhound stubbornness' listed in her AKC description. 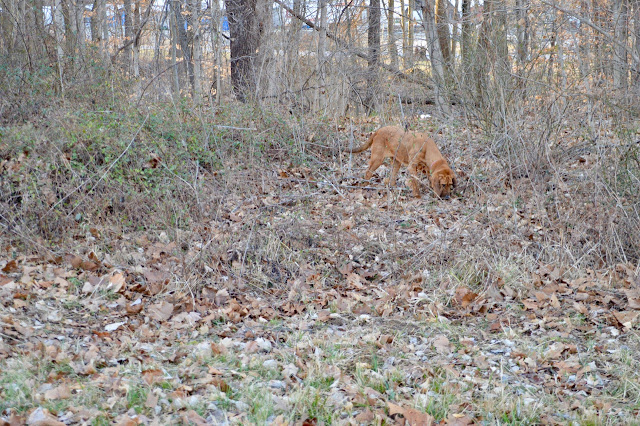 Like everyday, after a couple of cups of coffee and morning internet reading, we took off for our first of two daily hound walks. Stella was pretty excited this morning, showing more emotion than usual. Sadie had already sprinted to the back of the field directly behind the house. You can see from the brown grass just how busy the moles have been in this warmer than normal winter. 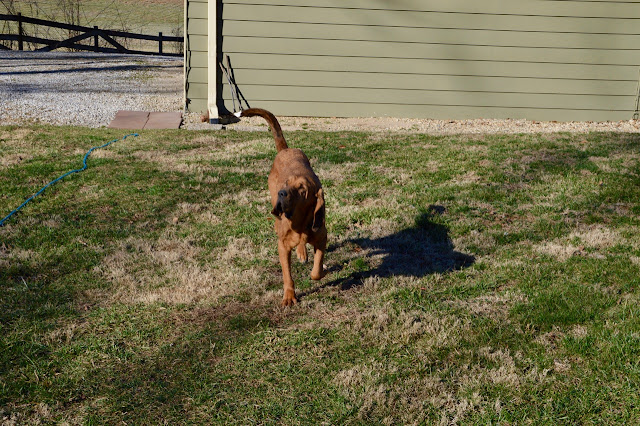 It felt good this morning, around 50° with no wind. A ski cap and light gloves were needed with the GoLite 800 jacket. To think it's going to be in the 60's later and stay that way for the next 10 days is fantastic. Is it too early to do some spring yard stuff in February? 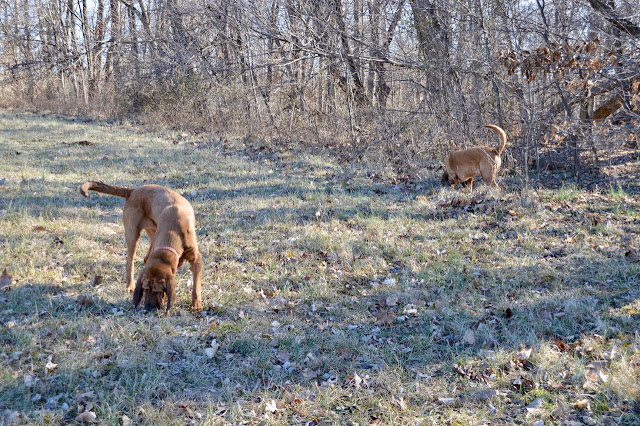 I've tried a few times to show how steep the wooded area is just off the field. I walked into that small area of woods today to get a better picture, different angles. Yet after downloading them into my computer and looking at the large size version I still have not captured just how steep it is to the bottom of the wet wooded area. 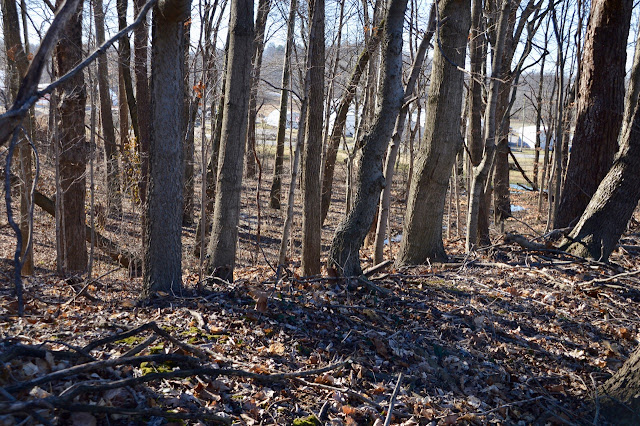 A lot of trees have been blown over in the past years. I didn't hear all of them fall but I was surprised just how many large trees had been blown over. All due to high winds and a very very saturated base. 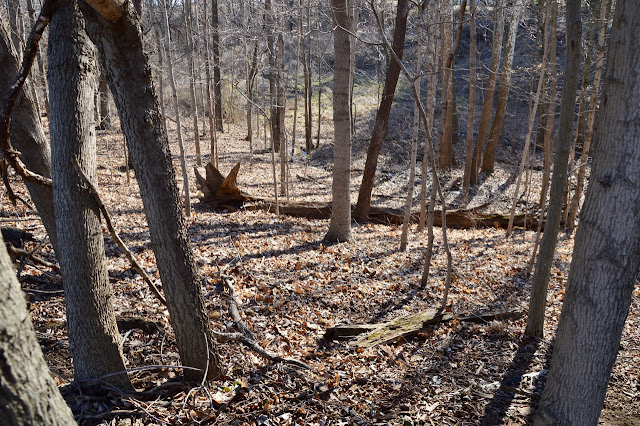 This is the limb where the unidentified animal feasted on the tree bark and some of the wood. One reader suspects it's the action of a porquepine. 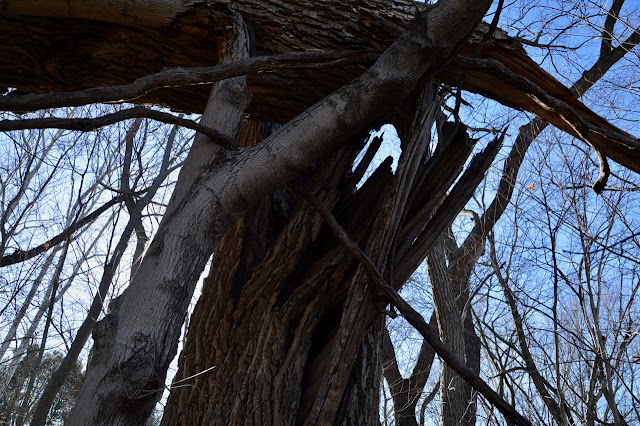 I took this next picture standing right next to the limb instead of a zoom shot from the field. That's a lot of eating. 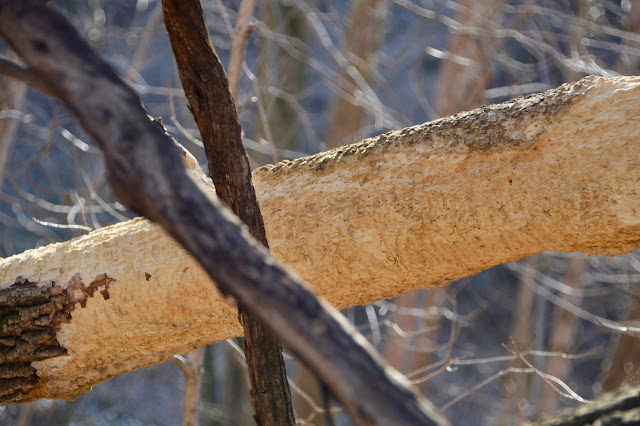 While I was inside the wooded area the hounds did not follow me but stayed out on the edge continuing their morning of gathering intel. Between their noses and mouth, everything will be identified and stored for their future reference. They can't let just anyone or anything in "their" field. 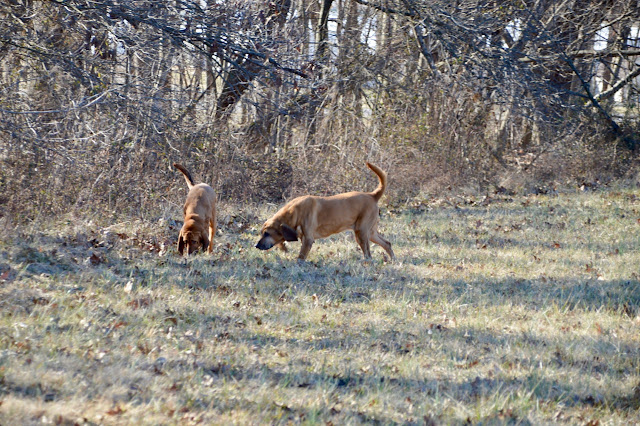 It's good once again to see Stella continue walking in our general direction instead of just all out ignoring Sadie and I. 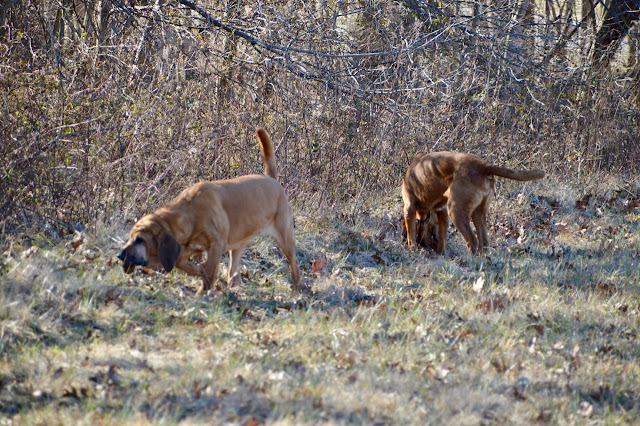 She always looks like she is disappointed whenever she walks but that is just her look naturally as a bloodhound. 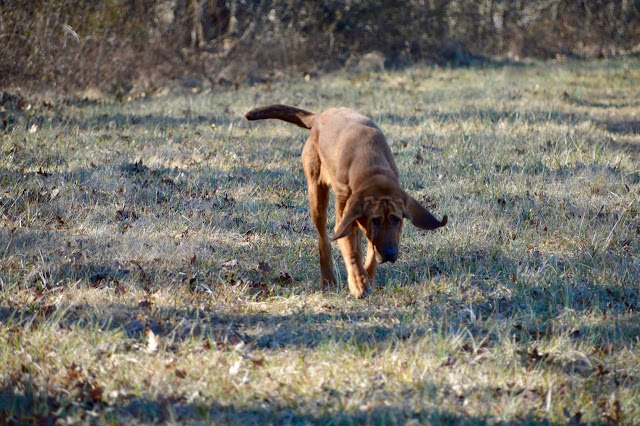 They didn't waste time this morning and rarely stopped. It was like the field was full of new scents even though we had just walked the field late yesterday afternoon. They were in constant motion. 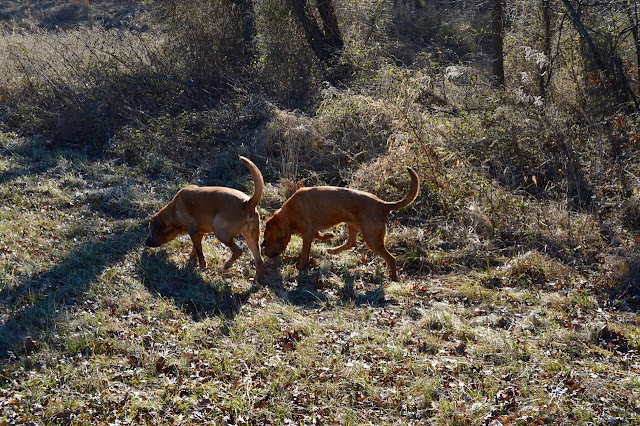 With the sunshine giving off a little warmth at 10am, I could see from the sky it would probably be the first time I take the Z4 out with the top down in 2017. That will be later this afternoon when the temps hit the max high for today. I'll probably do my 42 mile loop out through the country. The return trip is on a highway that is smooth, you can see forever and increase the speeds to the point of giving the I6 engine a workout and blow out some of the winter cobwebs. 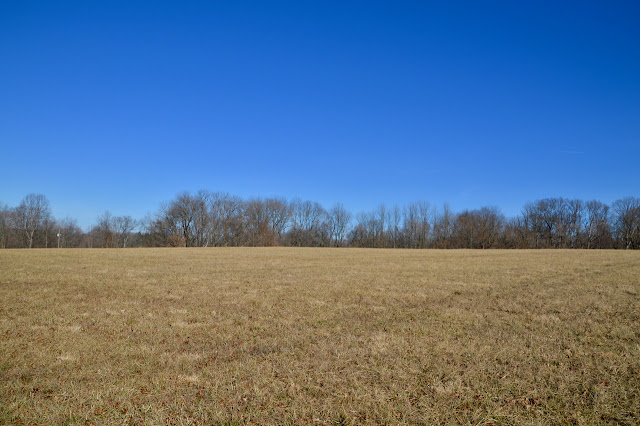 I followed Sadie and Stella up to through the far right corner. Stella followed us without me calling her name. It will be nice to see all of this green again. I've never been a fan of the winter dormant colors. 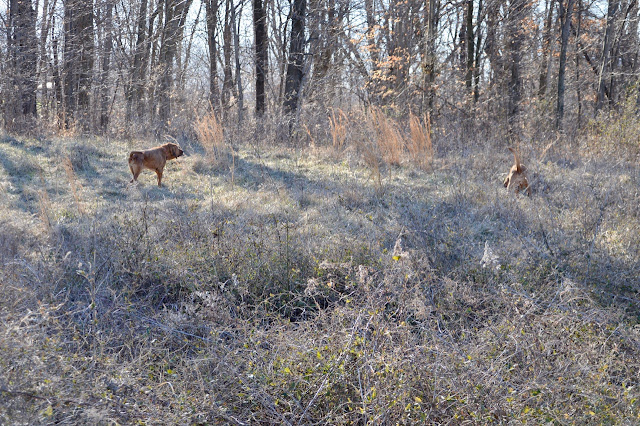 The past few days I have been driving the Mini Countryman in the 'sport' mode. With a push of a button, the steering gets tighter, the gearbox gets smaller, the acceleration faster and a slight feel of a sports car from the All4 Mini SUV. It feels great when driving in that mode but the real sports car was sitting back at the house and once again confirmed why I will not sell the Z4. 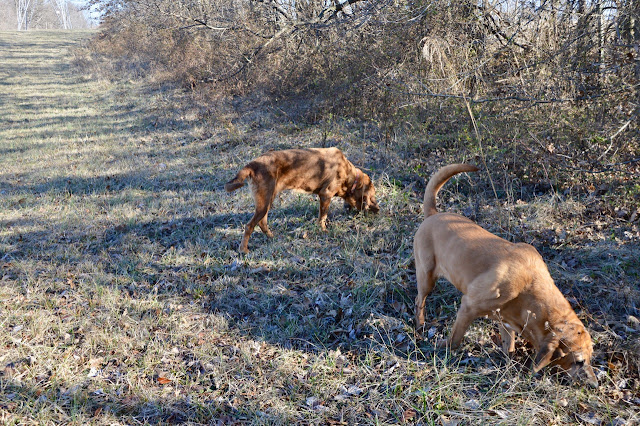 I say that because I did think at the time in early December when I traded for the Countryman that I would move to a one car garage for the first time in so long that I can't remember. It seems like I have always had more than one car since ... let me guess ... 1995. Yet every time that I drive that Z4 I know there is no way I can sell it. 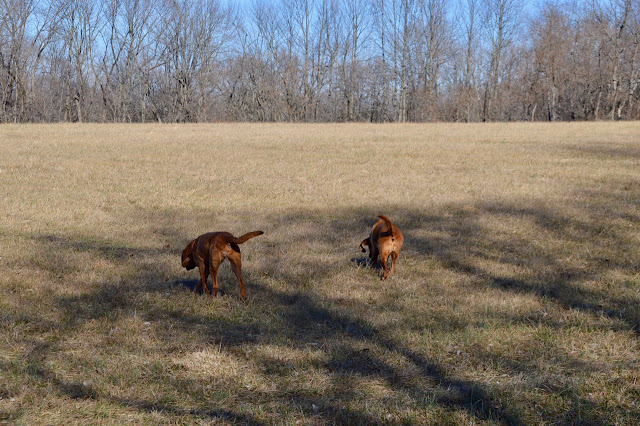 I saw last night where Al over at the The Bayfield Bunch is getting use to Blogger's format in posting and uploading his pictures. He has been having trouble with Live Writer and Picasa. I started this blog in 2011, deleted it a couple of times but rescued it within the 60-day window to not lose everything. I've tried Wordpress and like that platform a lot but there are advantages of using Blogger ... once you get a template designed the way you like it. 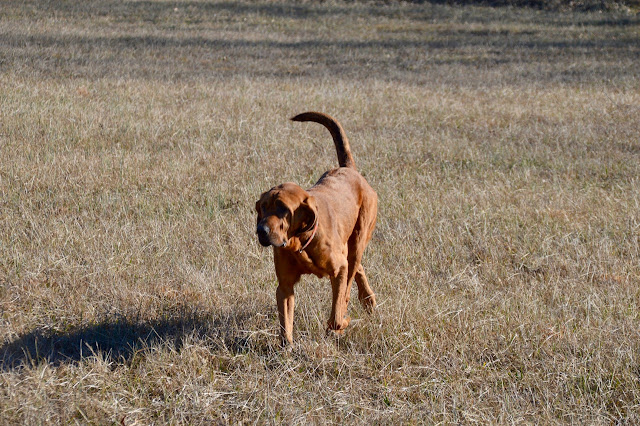 Another blogger I read had his Apple computer crash the other day. He is not sure if he has lost everything or not. I have around 22,000 pictures on my hard drive and backed up on an external drive for those 'just in case' moments. But he has thousands more pictures than I do and many more posts in his blog history. He will find out today what happened.

I think for us Apple users, something happened in their last OS update. Since that time my iMac has been shutting down and restarting on its own while it is in the sleep mode. That is usually a sure sign of either a virus or someone has control of your computer. Running BitDefender showed me there were no viruses or malware anywhere on my computer.

Then this morning I clicked on my 'Contacts' folder to add a new email address and my address book was blank. I checked all of the setting and every block that needed checked was checked. A good sign was the Contacts folder in my iCloud still had all of my addresses.

So I took a wild ass guess and rebooted my computer right before the hounds and I took of for our morning walk ... the Contacts in the folder were back ... all was good.

Many of you know I am a Excel spreadsheet addict. I'll not list everything I track here at home on a spreadsheet but one thing I have done for the past 18 years is track every penny that I spend, down to the cent. I have different categories, even separating dog food, vet trips and dog treats to give you some idea how detailed it is.

I take a monthly average of each category and then link to the previous year's spreadsheet. With a column of the monthly cost right next to the current one I can see if the cost are more or less than the previous year.

Even after 47 days of the new year I see my cost for groceries are increasing at a rapid rate. It's somewhat alarming because every 7-10 days I buy basically the same stuff. All of my meals are the same with an occasional 'treat' at times. It will be interesting to see how those cost adjust as we move through the year or is food costs increasing without letting us know.

Two big highlights from last night's shopping, was a large bag of Animal cookies Crackers on sale ... low or no fat ... even the hounds approved them. The other was a small bag of Blue Diamond Almonds ... HABANERO BBQ flavor. I was anxious to feel the habanero flame but it's much milder than I expected.

Has anyone ever had habanero pie? Great stuff.

With the feeling of winter being over, still it's way too soon to call it officially over, I am going back through my mental list of stuff that I didn't get done this winter. There is plenty of time to make a comeback and all things can be done in warm weather also.

My recycling center likes me since they do make a little money off of what I turn in. My trips are becoming more frequent because as I get closer to that magic age of 65 my paper junk mail delivered daily is increasing exponentially. How long will it take before "they" leave me alone???? I need some help here.

I may have mentioned recently I was either changing diets or looking at diet programs again. An old book off my self called The Blood Type Diet was an eye opener. About everything they mentioned to avoid are foods that still give me indigestion, even if it's healthy food.

Of course after little thought ... it was time for a new spreadsheet!!! LOL

The first thing I did was list all foods that I eat, even the condiments. I highlighted foods that give me problems. Then I added to that list of foods from the book The Blood Type Diet, which broke them down to (1) highly beneficial (2) neutral and (3) avoid. Those foods to avoid I changed their font to a light gray color.

Again, seeing the foods from my original list that gave me problems, matched up a lot with the ones I had grayed out from the book. My shopping list was getting more defined.

I have decided to take a little from all diets ... Mediterranean, Paleo, Vegan, Lacto-Vegitarian. Although my blood type, Type O, has a meat eating recommendation, what I have normally eaten for years is more along he lines of Mediterranean or LactoVeggie. With fish and chicken added but mostly fish. I think I will stick to that.

Basically the trips to 5-Guys Burgers will continue to be in 'moderation'. I can't remember the last trip I made there anyway so I assume I am way below the limit. No processed foods, except those Animal Cookies LOL, sugar with coffee but restrict as much as possible after that. A lot of fruits and veggies and make sure I keep the bowl of fruit on top of the refrigerator so Stella doesn't steal my bananas, mangos and apples.

This past month I added a few pounds, 2mm of fat around the waist when I added more beef like the book suggested but cut back on carbs. I had better decreases in weight and body fat on the Vegan diet ... but that made me feel tired a lot.

Enough about diets ... I need one of those old fashion Pepsi's made with sugar that they sell at the local Dollar Store.  (joking).

Well I have to stop this rambling, it's 12:03 pm and both bloodhounds are standing right next to my chair staring me down for lunch. We are just seconds away from Stella staring her last ditch effort for me to feed her by howling.

A beautiful morning here in 'the tropics' of southern Indiana.
at February 17, 2017