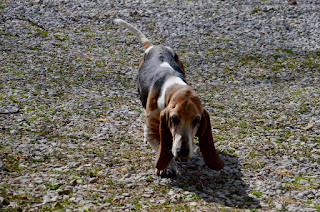 Yesterday I was wearing a t-shirt and cargo shorts for the 3rd day in a row and this morning I walk outside and notice some very very light snow flurries.

It was near 70° by lunchtime yesterday, hot enough for the infamous hermit ... Heidi ... to escape from her hibernating cave built with my Marmot sleeping bag. She didn't join us for the walk yesterday afternoon but she did explore the front, side and back yards while we were gone. 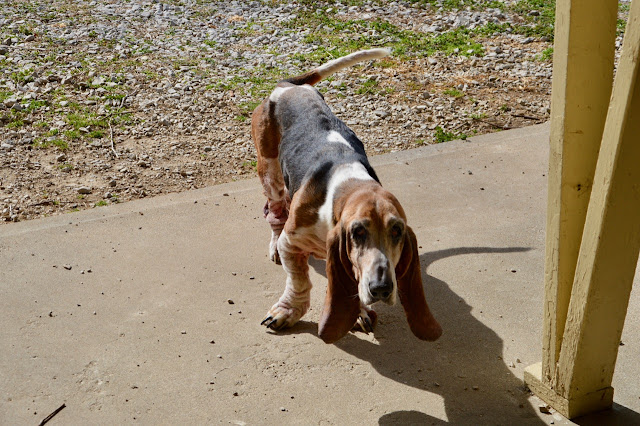 We took off for our 2nd of 3 walks of the day. I could tell that Stella was back to her old habit of laying back ... Sadie and I kept walking. I wanted to see what Stella would do if I left her alone and in the end I was right. 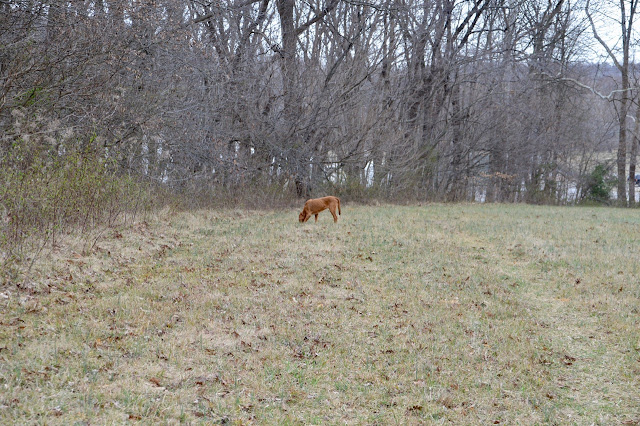 Sadie really enjoyed the warm weather, almost if not 70°. You could even feel the heat from the sun as we walked. It was hard to believe that by Saturday morning I would be back in wool socks, hiking boots, jeans and a down parka doing the walk. 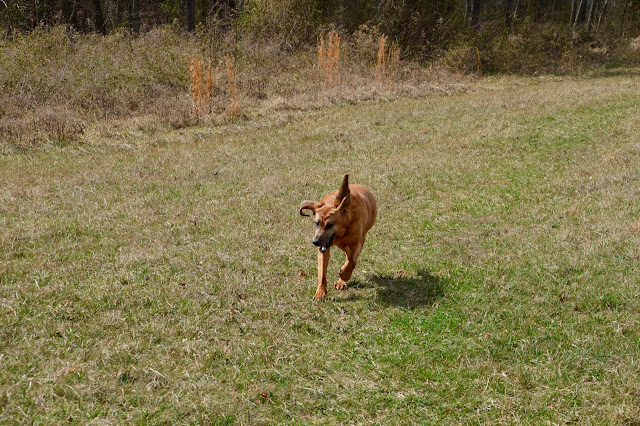 As I glanced back I saw no sign of Stella as I expected. Sadie and I were walking along the back edge of the field. Just as I was about to turn my head and face the direction I was I was walking ... I noticed that Stella was already over by the woods behind the neighbor's house. 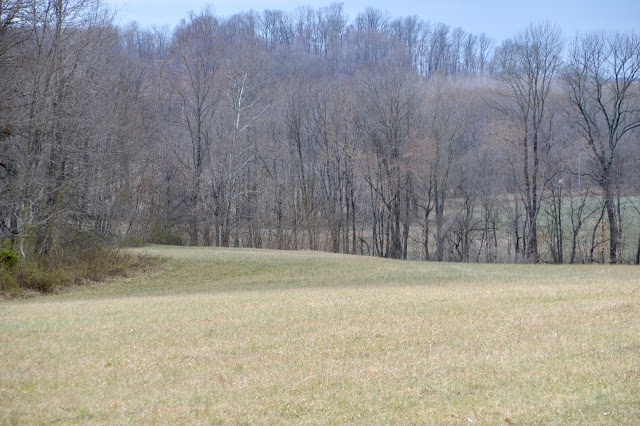 That was what I expected her to do but I did not think it would happen that soon. As long as she stayed in my viewing area I was fine with it. 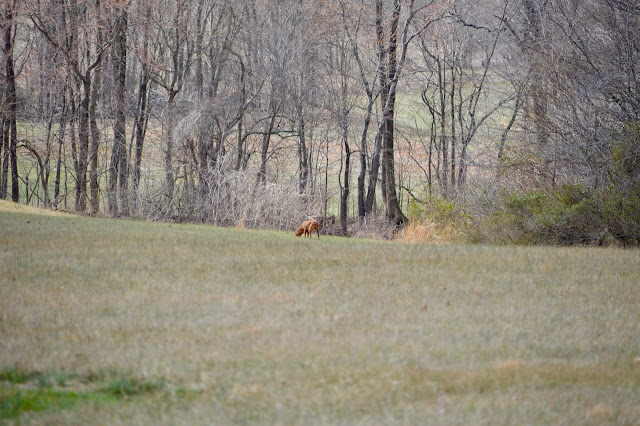 Sadie hadn't noticed her ... she kept exploring the center of the field while I continued to walk. 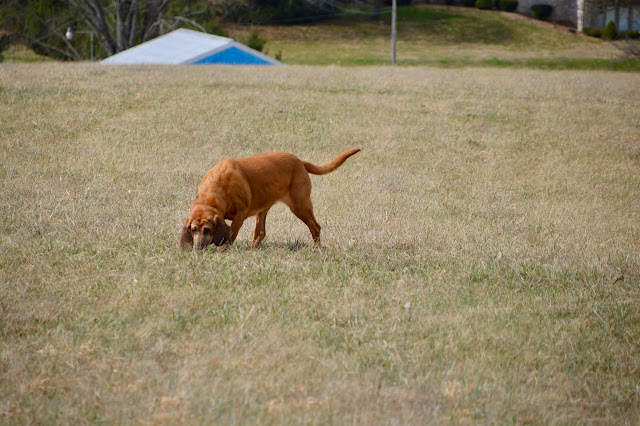 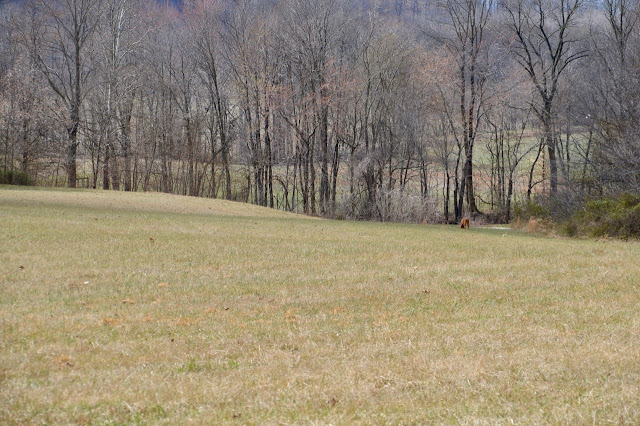 Whatever Stella had found it must have been good, she didn't even lift her head as I approached her. 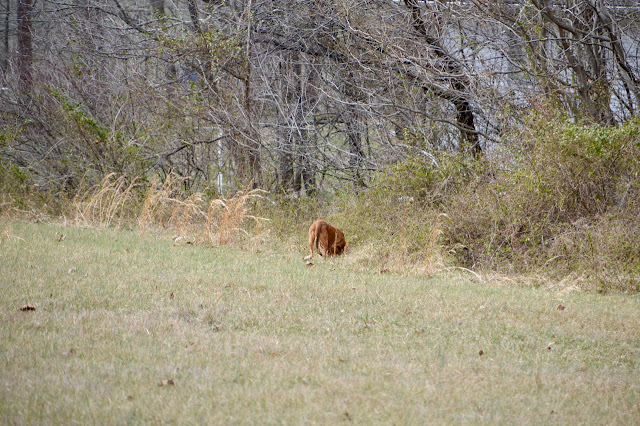 Once Sadie saw Stella, she took off sprinting to see what she had found. Once I got over to that spot and looked at the ground ... you wouldn't believe ... I found nothing there. Nothing but bare ground and wet grass. 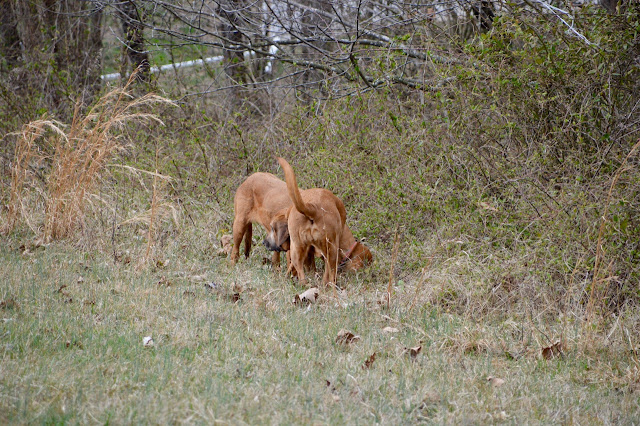 When Stella refused to even lift her head and come when I called her, I pulled out the only decision maker I had ... the standard 6' dog leash. Even after I connected it to her collar, she pulled away to move her head back to the spot she was really interested in. 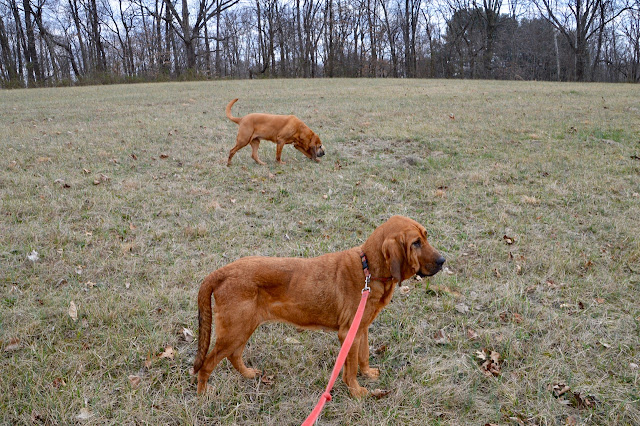 I dropped the leash to the ground and she followed me as we walked directly to the house instead of moving back to the worn path.

I knew it would be cold this morning when we got up but when I stepped out to take the first picture of the day, a freezing wind hit my face and it felt much much colder than 31°. Luckily it's going to change by Monday and get back up into the 50s and 60s. 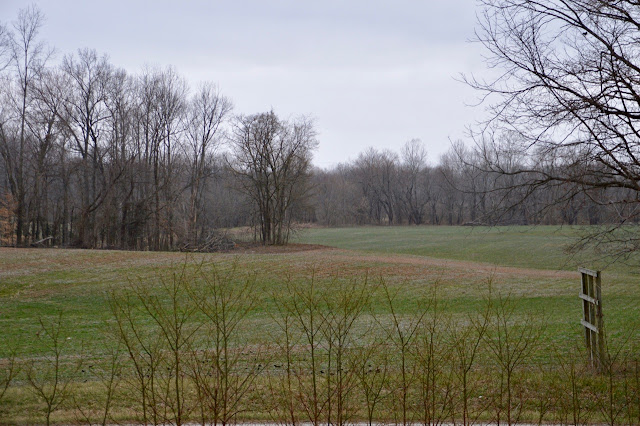 I guess one advantage of having a black car is that it doesn't matter how light the snow flurries are, you can tell it's been trying to snow. Nothing of any substance is expected in 'the tropics' today. 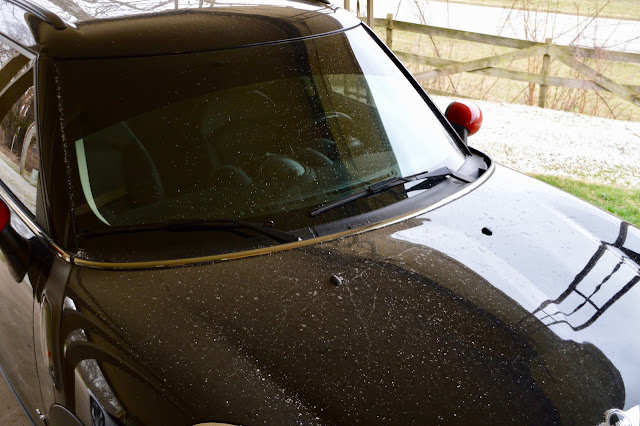 We did the normal wait before taking the first walk of the day ... coffee, internet reading. The winds had picked up even more speed, it was freezing my face and small crystals of snow was barely visible. My iPhone weather app said it was 31°, winds out of the west at 18mph and a 'feels like' 18°. 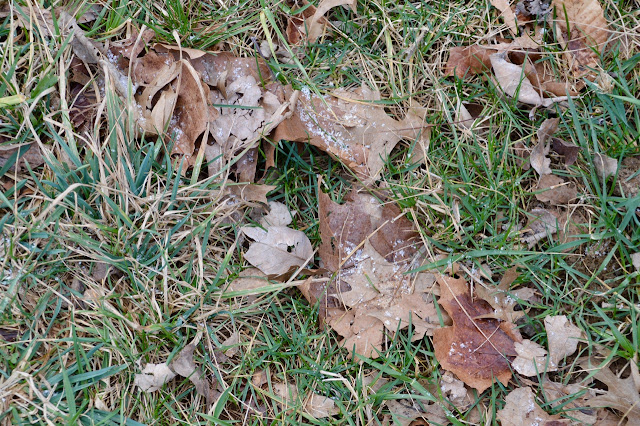 At least there was a lot of blue sky and you could see the sunshine so all is not lost. 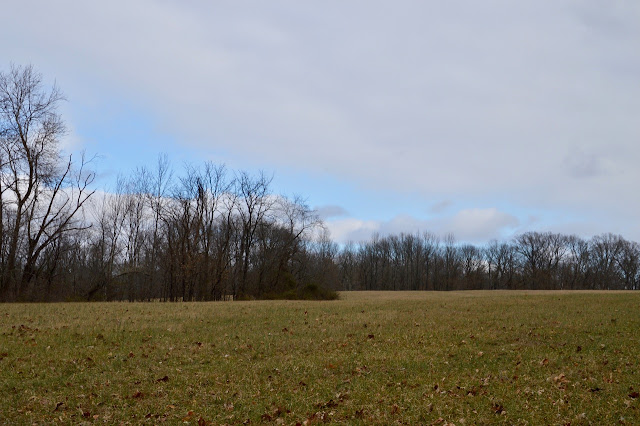 Both hounds were energetic and didn't take long to move out in front of me quite a ways. 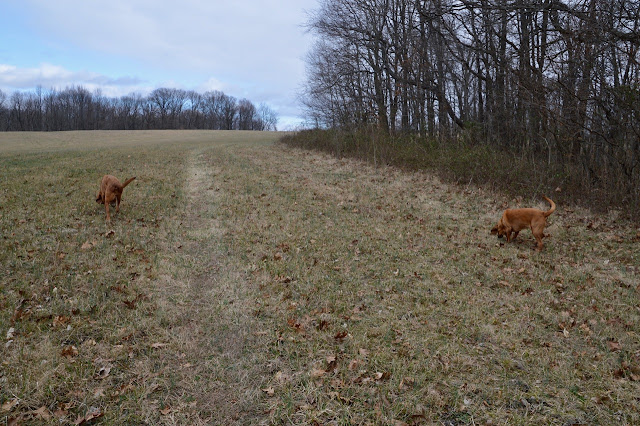 You can barely see the direction of the winds blowing the hay that was missed during last fall's mowing. While I was looking at Sadie, Stella sprinted around both of us and headed to the far right corner. 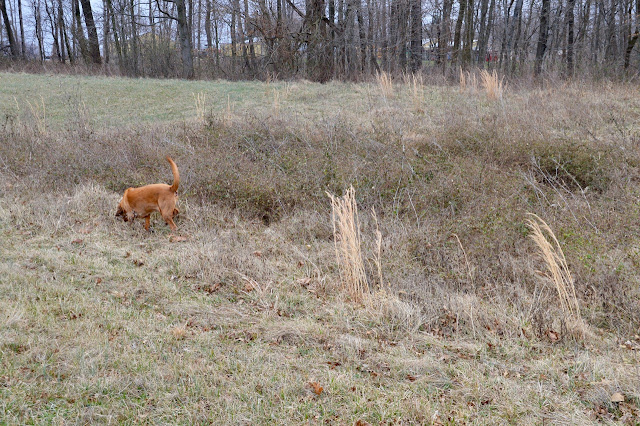 It was good to see her running again. I was beginning to wonder if she was feeling okay since it had been a while since she had been sprinting at full speed in the field. 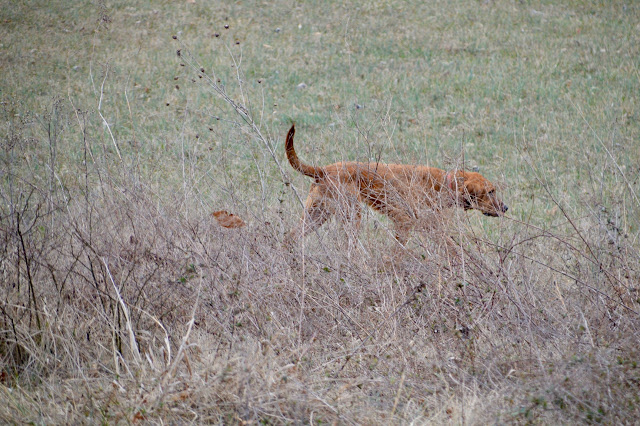 Sadie then passed me sprinting but she was heading in a different direction than Stella ... both interested in different areas. 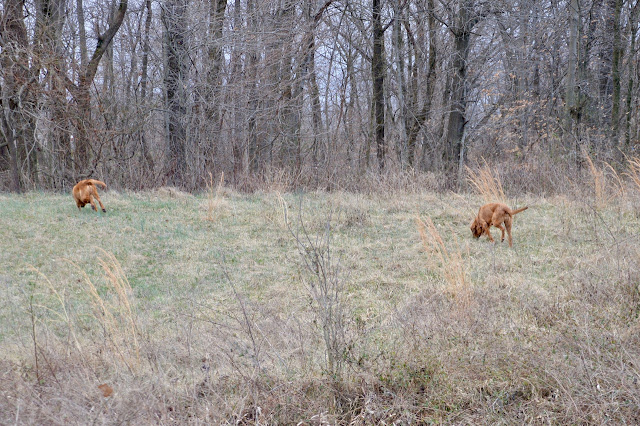 Sadie went one direction and Stella headed the other direction ... both very focused on the scents they had found. 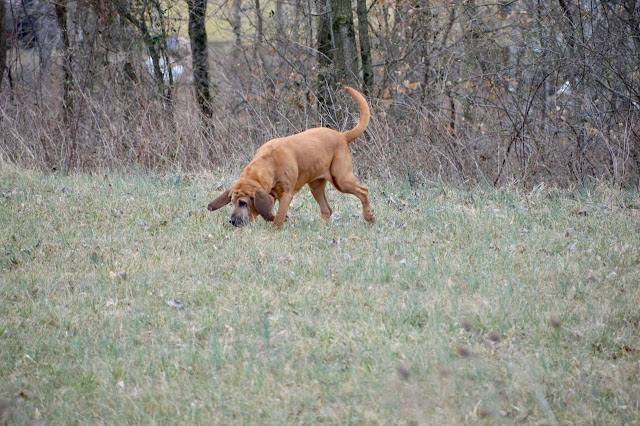 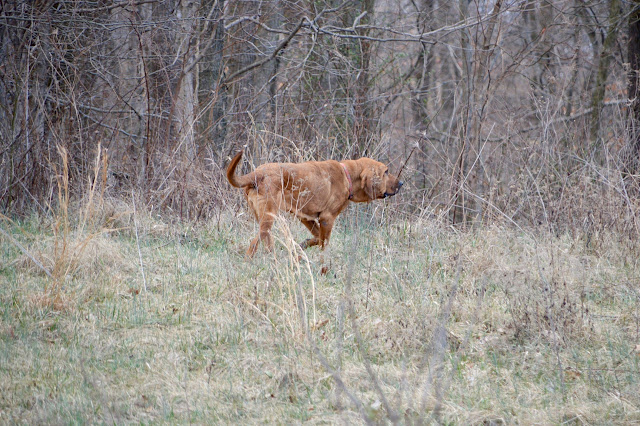 I was surprised to see Stella sprint toward me when I called her name ... that was a sure sign just how cold it must have been. She was way out in front of me before I could focus the camera. She did some good running today. 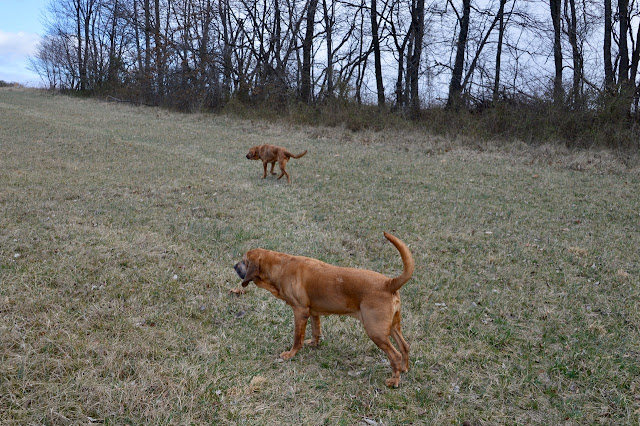 I knew when I saw them like this ... something was up and I wondered if I was going to have to chase them to the woods north of us and farther than I wanted to walk or run in today's weather. 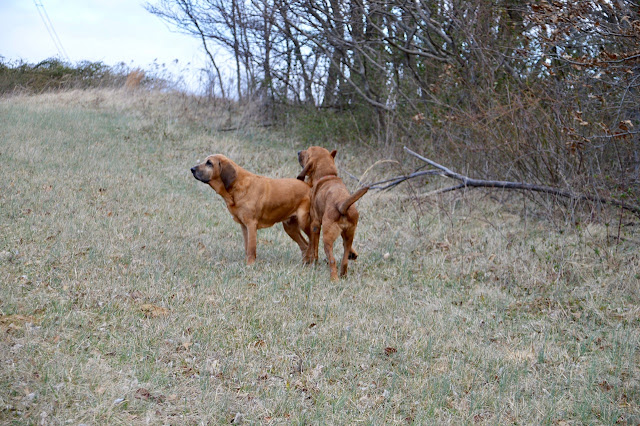 Luckily when they took of running they did a large looping circle instead of heading toward the woods in the 'no fly zone'. 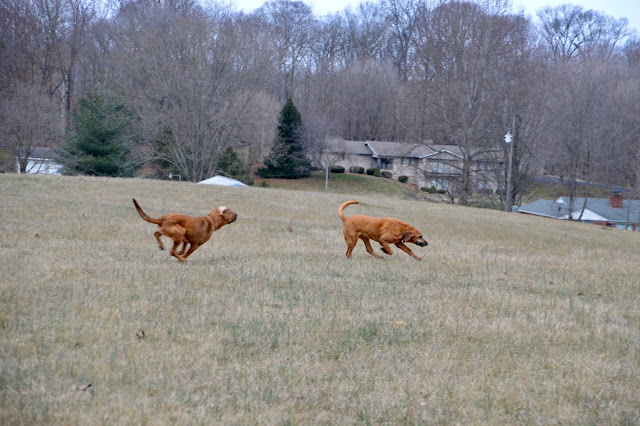 There were either sounds or scents that really had their interest today. 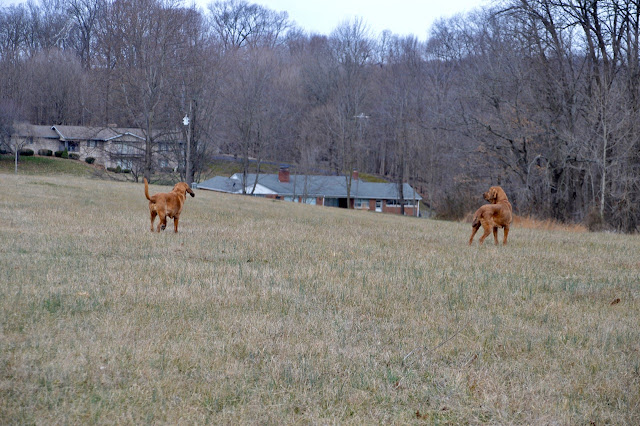 Stella is too skinny. I've been feeding her larger portions of food but that doesn't put the weight back on her. It looks like she needs more fat and protein in her food. 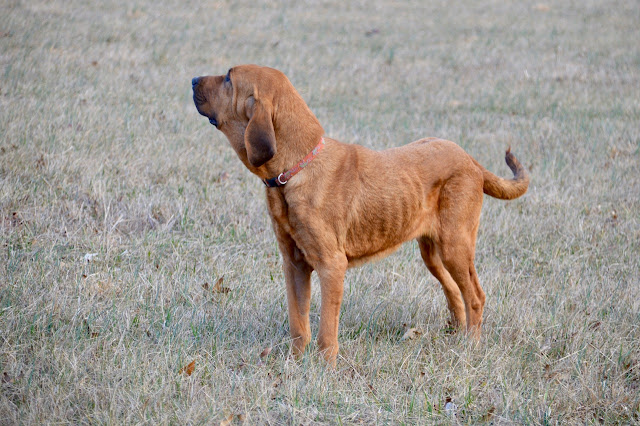 Sadie still battles a heavy waistline but some of that should come off this summer. 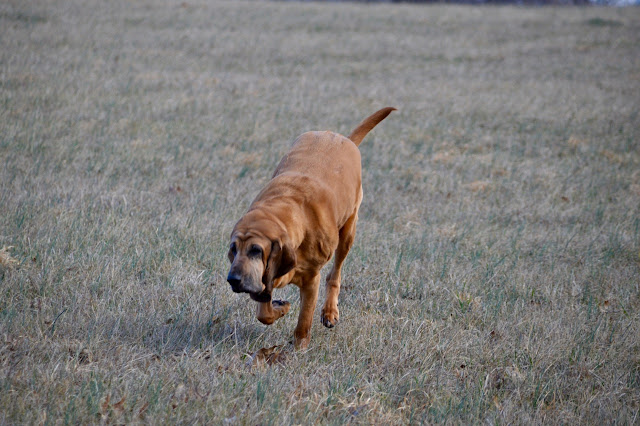 For once I didn't have to call either of them to 'come on' as we neared the house. Both of them wanted back inside where it was 30° warmer. 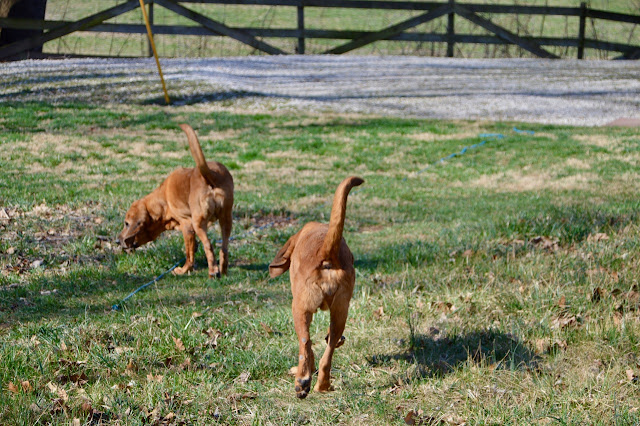 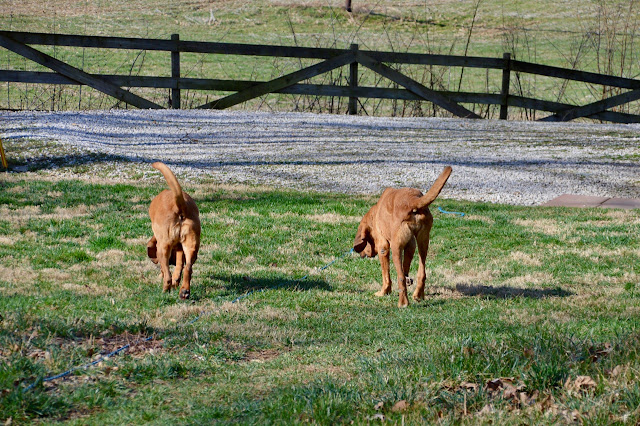 It was a good test for my camera today. The other day when I mentioned too many of my early morning pictures seemed to be blurry lately, I had a reader comment:

"The camera may develop moisture trouble inside the lens with the change in temp from inside to outside for the short term."

I thought that might be a possibility but then I started thinking why did it take so long to do that? It was only recently I started noticing a change in my picture quality. So today's change in temps was a good test to see if what I thought might be the problem.

I think today's pictures I took on this mornings walk proves that I had become lazy when taking pictures. I might have been breathing while I took the picture, thus a slight movement of the camera. I definitely found out my arms were out of position because I had become lazy.

These past two days I have made sure my left hand is directly under the lens, that both my arms and elbows are tucked in close to my chest to prevent any movement of the camera. Forming a human tripod for the camera. Then right before taking the picture I either take a deep breath or hold my breath.

It might be my eyes but the pictures from this morning's walk look much sharper to me so that proves to me it was user error ... me ... that caused the pictures being not quite as sharp as I use to take.

Not much planned today except for some book reading, watch a couple of college basketball games and stay warm here in 'the tropics' of southern Indiana.
at February 25, 2017