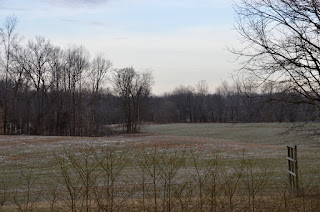 Not much was planned today. The temps were going to climb from the 20's to the 50's by late afternoon. I knew the hounds would needed a couple of walks. Plus I was back in the mood for reading, after taking a day off from books.

The highlight of the week I guess was taking the car cover off of the Z4 and taking it for a spin yesterday. It had been almost a month since the last trip. It's all based on weather, when I take it out. Even in freezing temps it started right up, and the heater will blast you out of the car when turned on. I thought about putting the top down but still would have been too cold with a down parka and ski gloves. 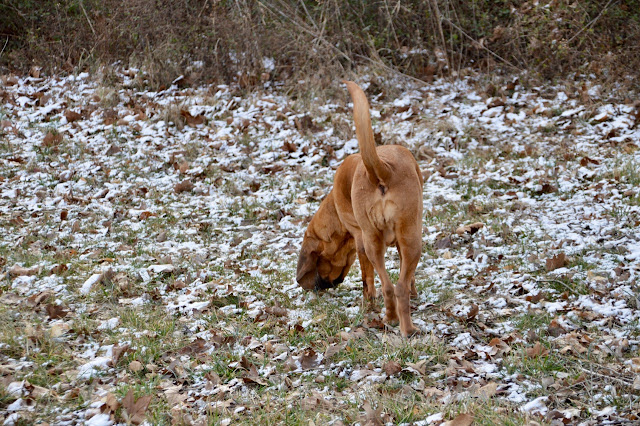 I took it out again today after the hounds had been fed lunch. I have a few very nice country roads or highways I can take, all different directions. During the drive yesterday I decided to flip the car's positions in the carport. I had always parked my other Mini Cooper in the smaller outboard space.

Since I no longer had the FJ, I moved the Z4 to the 'inside' space and that keeps it away from the weather a little more. I'll still keep the car cover on it during bad weather and during the times the fields are being plowed or harvested due to the large amount of dust in the air. 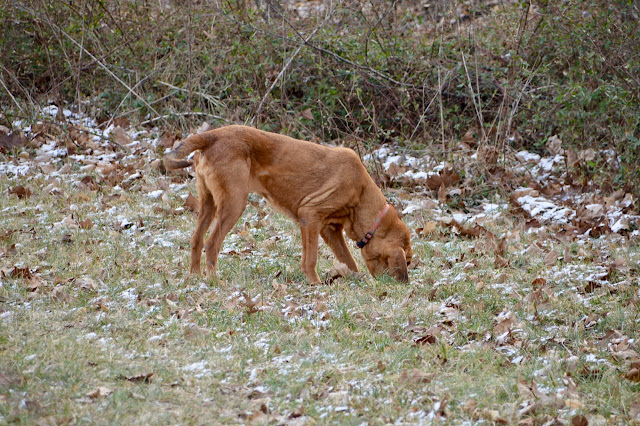 Stella was out in front on this mornings walk. While Sadie was doing her normal hopping up and down, grabbing my hand, thrilled we were walking ... Stella trotted out in front of us.

Does it look like this chewed tree limb is getting smaller? 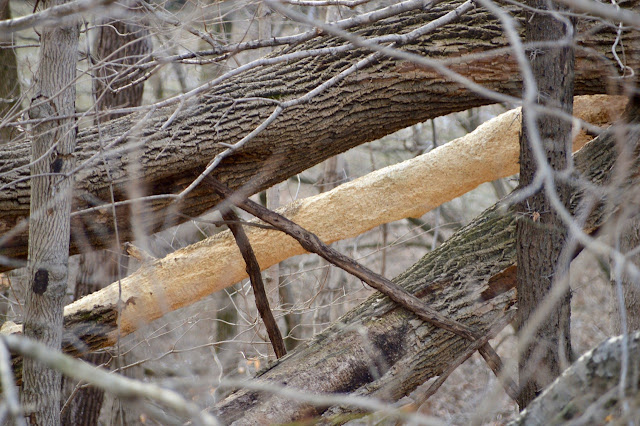 The hounds were a little slow in their searches this morning, not really energized and even I was walking at a slower pace. It was Friday I guess, after surviving another week of retirement. 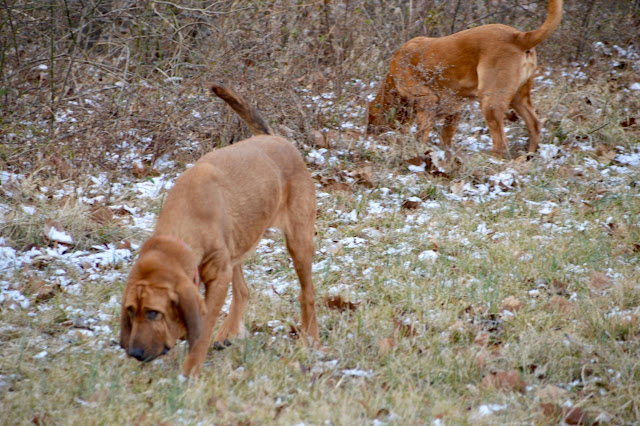 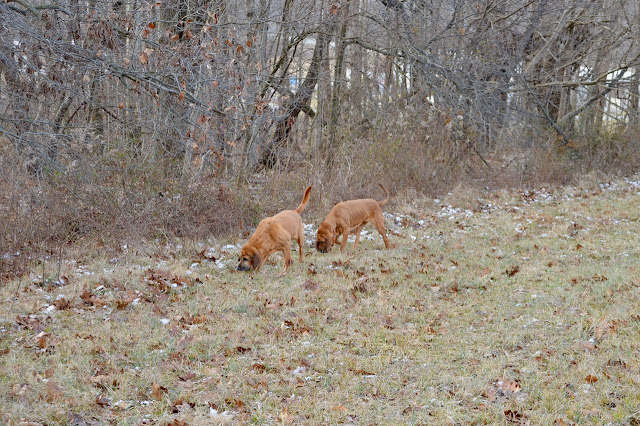 While Sadie checked out some of the brush area, Stella was behind us and had disappeared. Instead of leaving her there, I backtracked to find her barely inside the wooded area. She came when I called and trotted along the edge of field for a while, then got distracted by something she smelled. 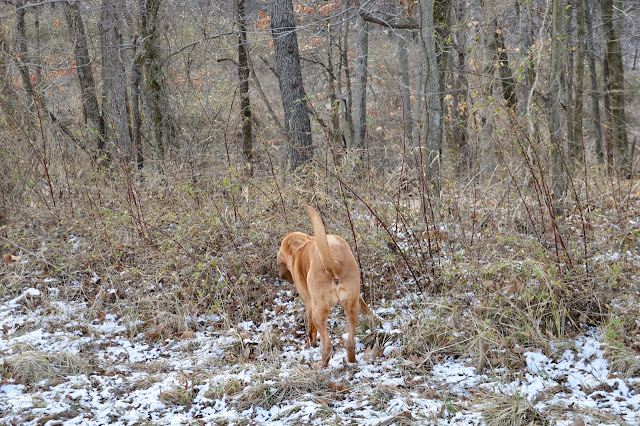 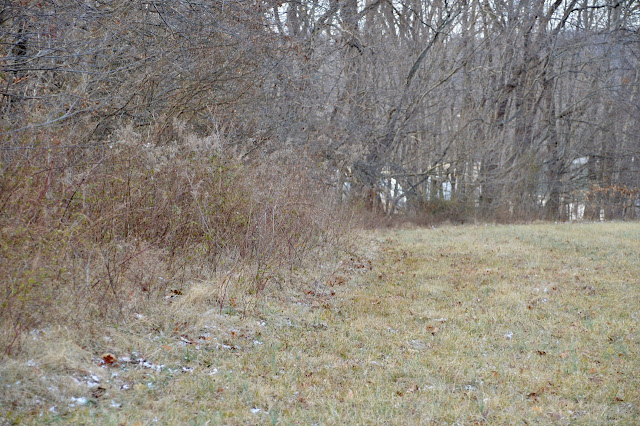 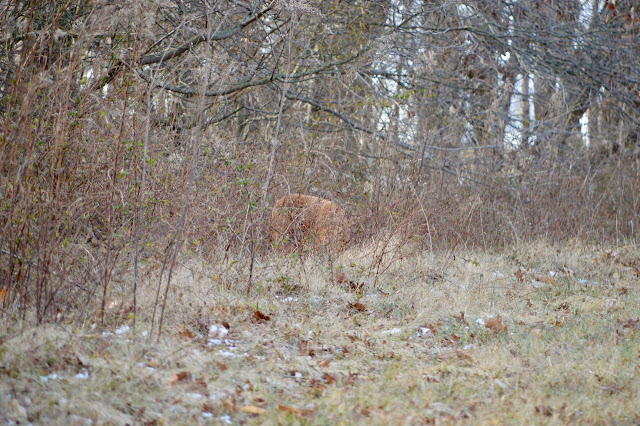 She didn't seem really thrilled that she had to move from her point of interest but didn't hesitate in trotting toward Sadie. Then she stopped again for the second time so it was time for the infamous standard leash. I connected it and let it drop to the ground. 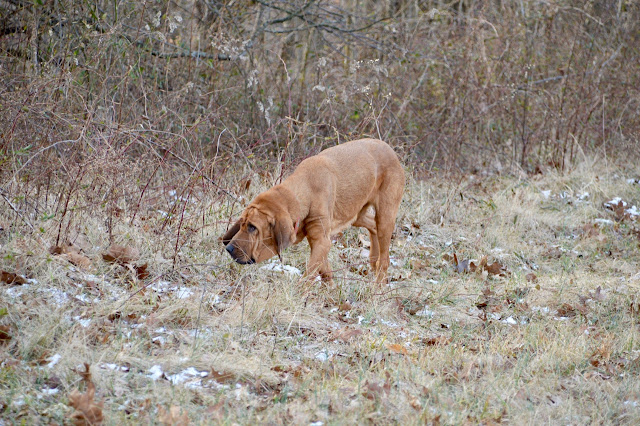 It's funny how she reacts to having the leash ... she will move and stay on the path, walks slower, head lowered to the ground. I guess it's a way for her to show me her displeasure. 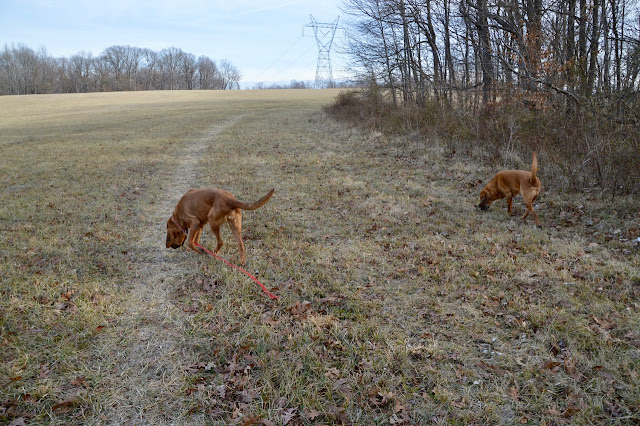 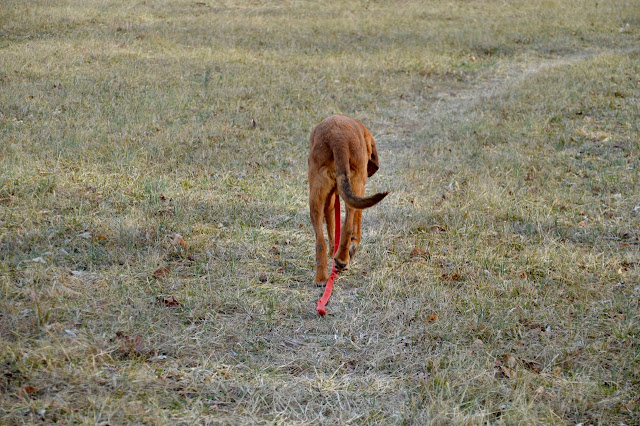 While she was walking along with us I moved up to unhook her from the leash and she still followed the path until we got to the far right hand corner. 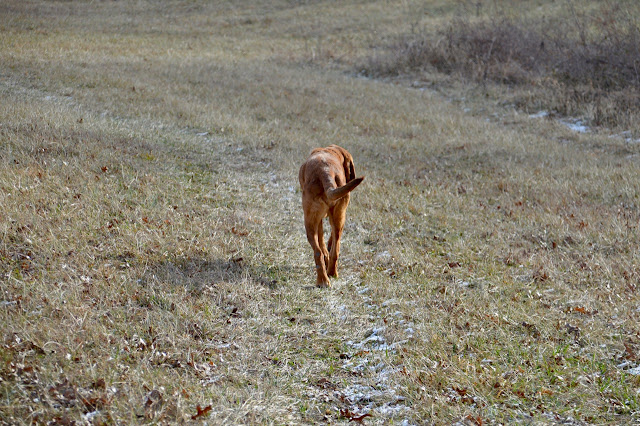 She was about to take off right, until I called her name. She then ran to catch up with Sadie. She has been pretty cooperative this week. 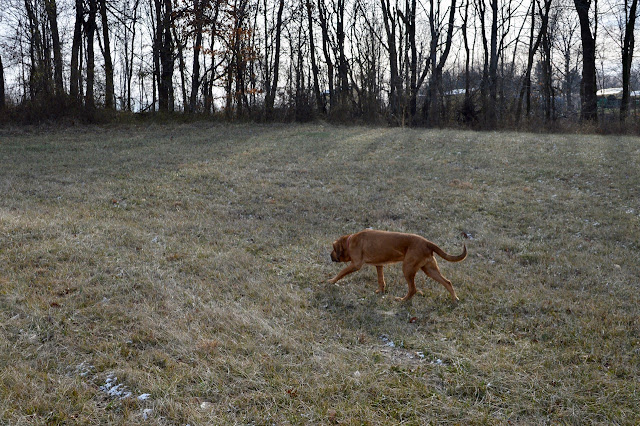 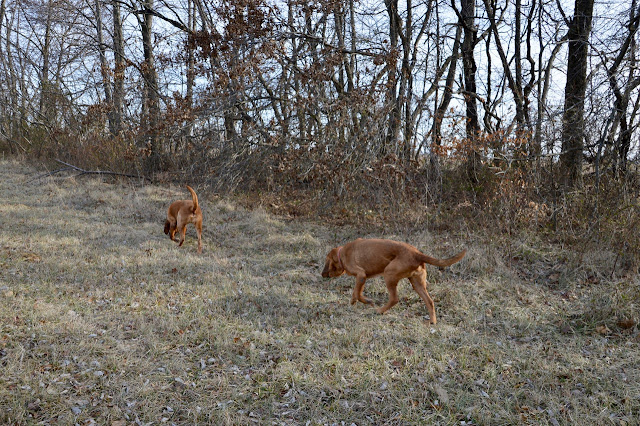 Like I said before, Sadie wasn't as energized has she has been in recent weeks. Maybe they were tracking older deer scent that they had already identified and nothing exciting was crossing their noses. 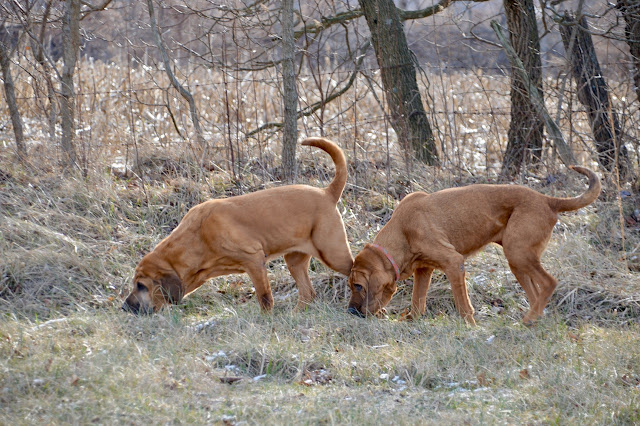 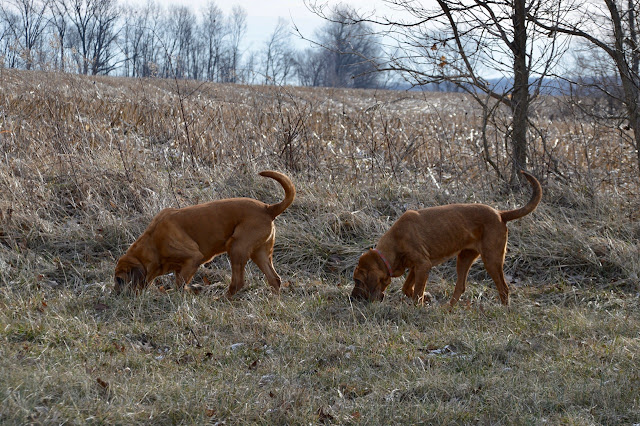 I made the turn without looking back, calling Stella's name ... when I turned to take a picture she was already on her way to run in front of me. 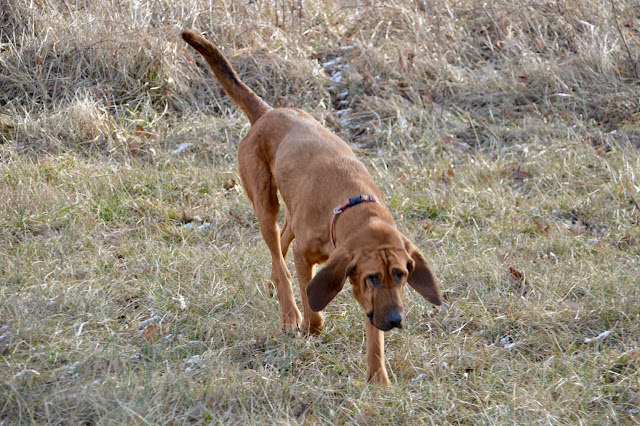 It was sunny this morning but still very very cold and windy, from the SW. 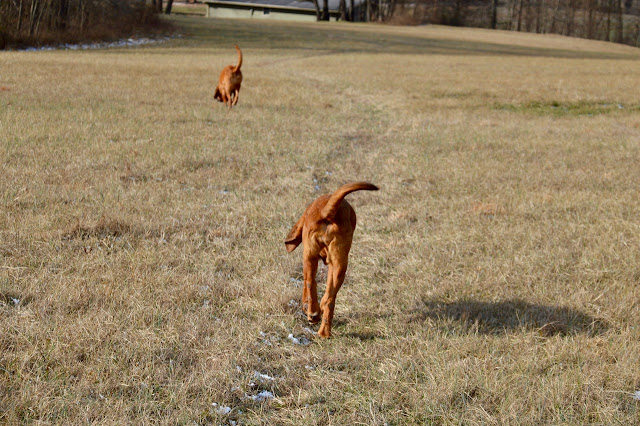 I needed to make a trip to the local Walmart to pick up a new pair of sunglasses, the kind that clip on to my eyeglass. I only wear glasses to drive and watch tv. They are not needed when I am on the computer nor when reading books. But once again, I lost the clip on sunglasses yesterday in the most mysterious way. I still cannot figure out how I lost them nor where.

I parked the Z4 by the air pump, got out of the car and took off the sunglass slipping them into my jacket pocket (I thought), walked across the parking lot to the mini mart to get some change for the machine, came back to the car and couldn't find my sunglasses when I started to leave.

I went back to the mini mart to double check the counter, asked the cashier if they had found them and also checked by the ATM machine ... while walking back to the car I kept my eyes to the ground just in case they dropped out of my pocket. It was a true 'senior moment' ... they were gone!

After lunch I always let the hounds out, including Heidi, for a short trip but today I saw Sadie in an area that is not allowed. There is a small ditch behind the burn pile for her to cross to get to where she is in this photo. With all of that being overgrown with wild bushes in the summer she doesn't go in there. 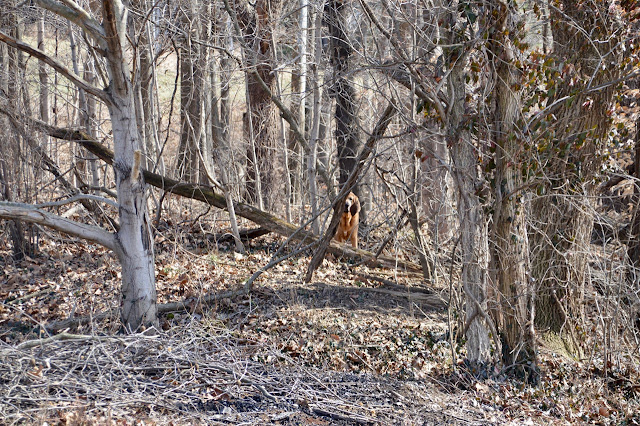 For some reason when I got back from the short Z4 drive this afternoon I thought it was somewhere around 4pm. Maybe because we did so much today. So I grabbed the camera, the leash and headed out for our afternoon walk. The leash was not needed this afternoon. I only had to tell Stella "come on" and she would move and catch up with us. 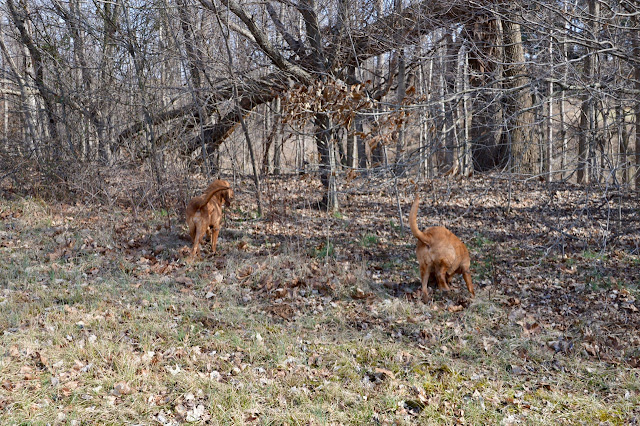 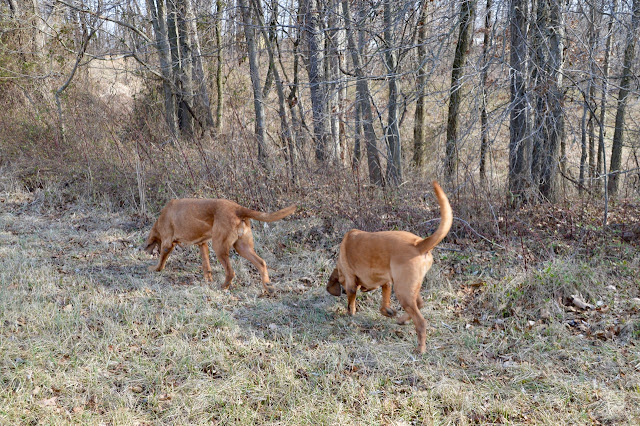 It was warming up but the winds were stronger this afternoon and still blowing cold air. It's going to be great with 7 days of warmer weather and much warmer than the past February averages. 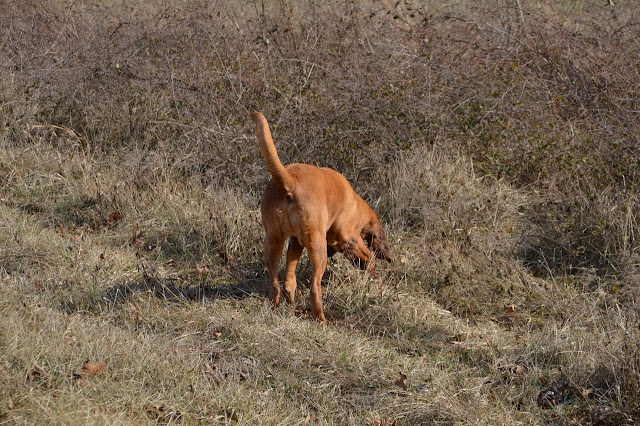 I let the hounds go where they wanted this afternoon. They were moving much faster than they were this morning. Stella and Sadie were getting in some good exercise. Heidi? She was in a deep sleep snoring when I left the house. 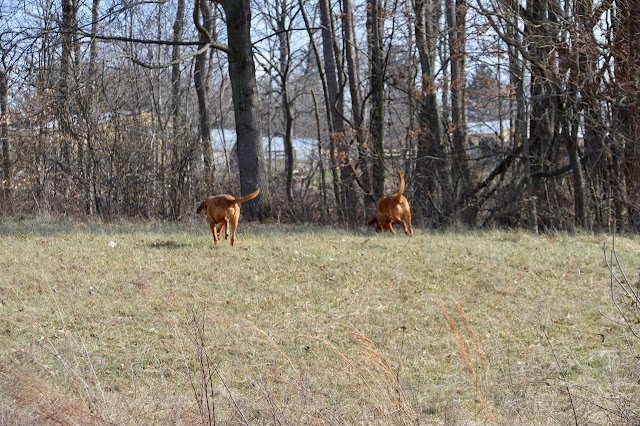 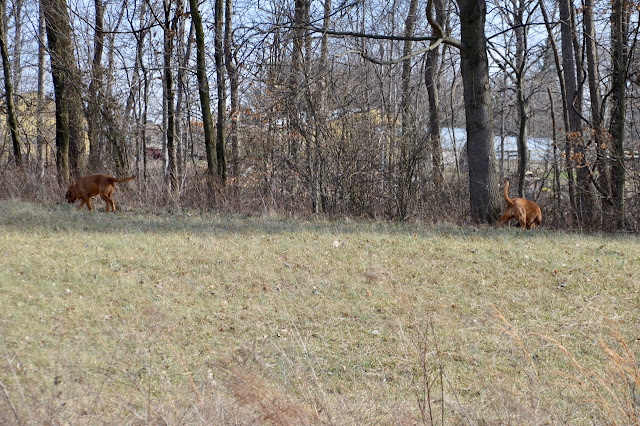 For some reason lately Stella has been itching a lot. No fleas were found when I checked and she will take time even during the walk to scratch herself. 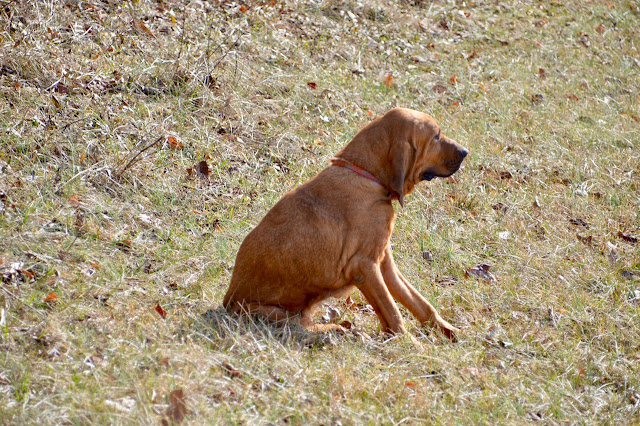 Sadie was pretty happy with a walk so soon in the afternoon. I found out why as I was way off on the time, by almost two hours. 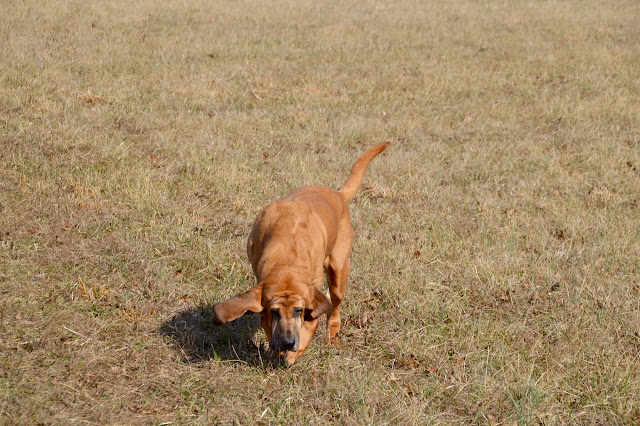 While Sadie and Stella joined Heidi for an afternoon siesta, I sat in a sunlit living room reading. 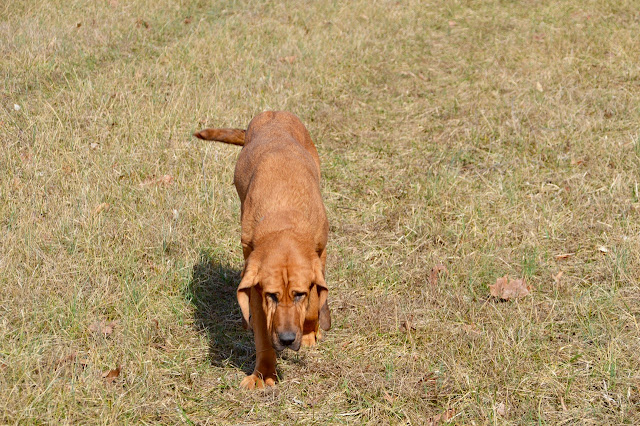 With college and pro football officially over now, I am kinda in a lull for my sports addiction. I get a daily email reminder of how many days until MLB starts but that is still a couple of months away. Maybe Heidi has the right idea and taking daily siesta isn't a bad idea.

It's sunny and nice today in 'the tropics' of southern Indiana.
at February 10, 2017