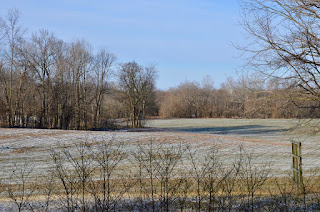 The snow started late yesterday afternoon as I glanced out the large window next to the kitchen table. Snow flurries interrupted my game of Mahjong.

I knew it wouldn't last nor would it get very deep. All of that was heading east. By 1am when we were outside for the last trip of the night for the hounds, the temperatures had dropped considerably and those predicted temperatures in the teens felt like they were just a few hours away.

Sadie was out early to check the amount of snow and just how cold it was. Facebook's program where they show a picture you posted a year ago or more, showed it snowed this time last year but just a little more than what we had today. It has really been a mild winter in the topics of southern Indiana. 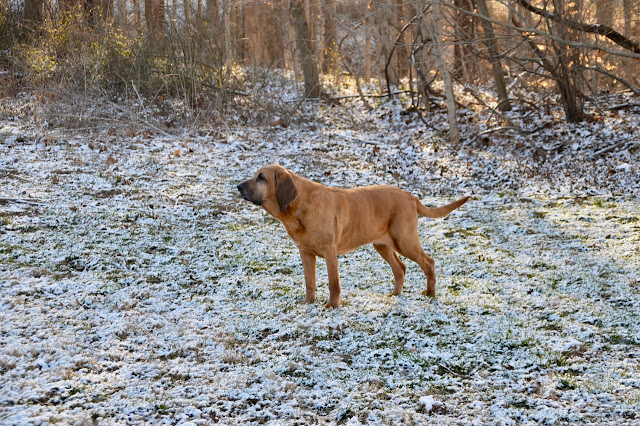 Still it was cold enough this morning that Sadie didn't beg for a walk that early, she headed right back to the house. By 11am the temp was up to 18° and the "feels like" was around 6° ... so there was some hesitation in deciding if we should walk today. Is that too cold on the paws of their feet. 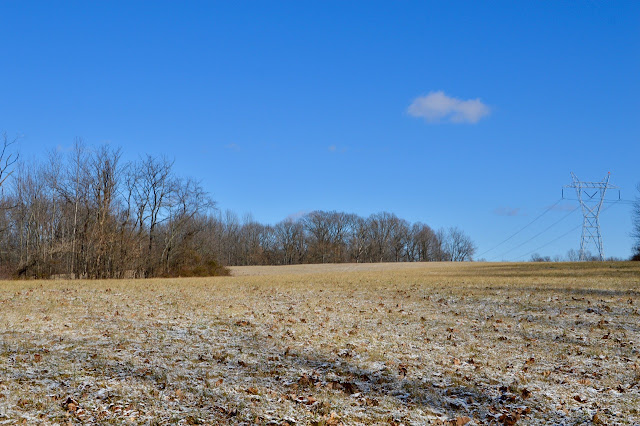 Knowing we had walked in blizzard conditions in the past, in deep snow, I decided it was safe for us to take a walk this morning. I didn't feel anything except on my face with the freezing cold wind coming out of the NW. Yet it wasn't at the level of being miserable. 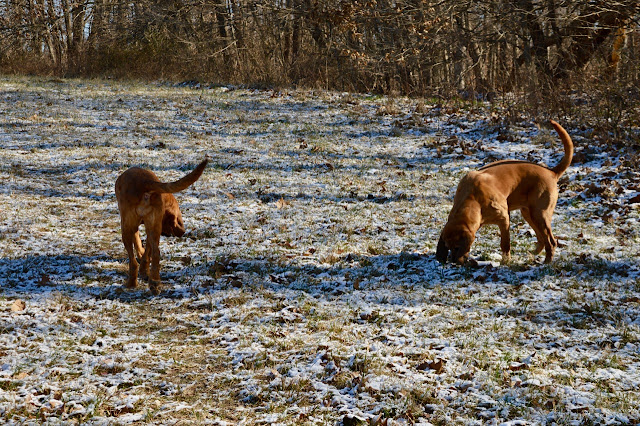 Stella wanted to show me she was in her 2nd day of her new routine. That is walking with us instead of staying back and eating anything she could find under the thick grass and leaves. It's funny how she changes routines every few weeks, in an instant. 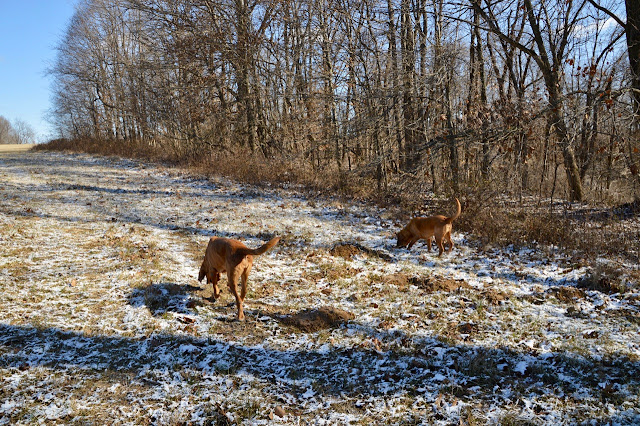 I thought it was a pretty strong wind as we walked but it wasn't until I turned the first corner that I really felt it. If you look at those tall light tan bushes you can see them blowing in the wind. It's hard to believe by tomorrow afternoon the temps will be in the high 50's for the next three days and then back to the 40s. That sounds good to me. 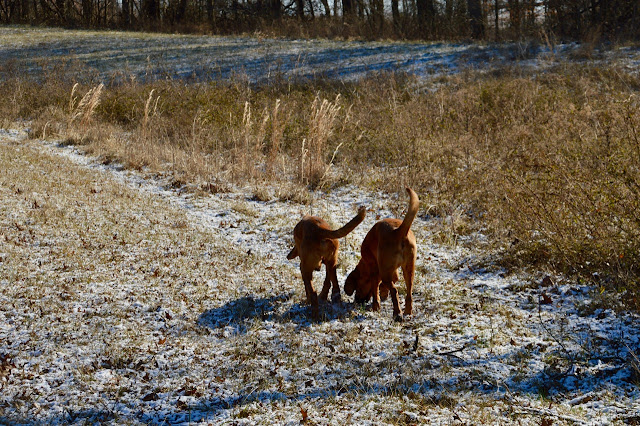 While Sadie broke left to head to the field, Stella headed to the far right corner. She had not been up there in a few weeks. I thought I might need to follow her to keep her going but I thought it was cold enough that she would catch up to us on her own. 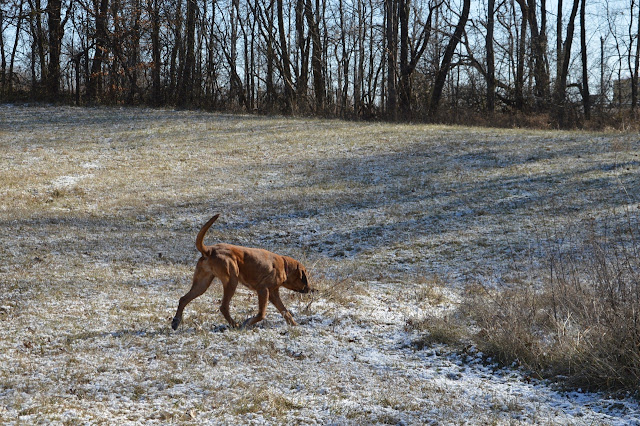 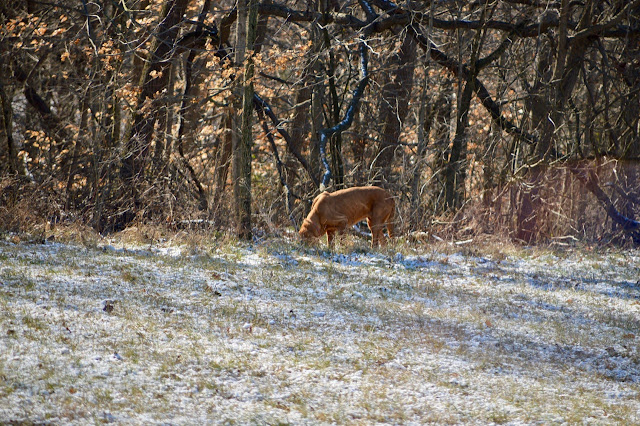 Sadie was curious on what Stella was doing and wondering if she was coming or not. More than likely she was interested in what Stella was eating. They cannot see that far so what scent is she picking up to have her look that way? 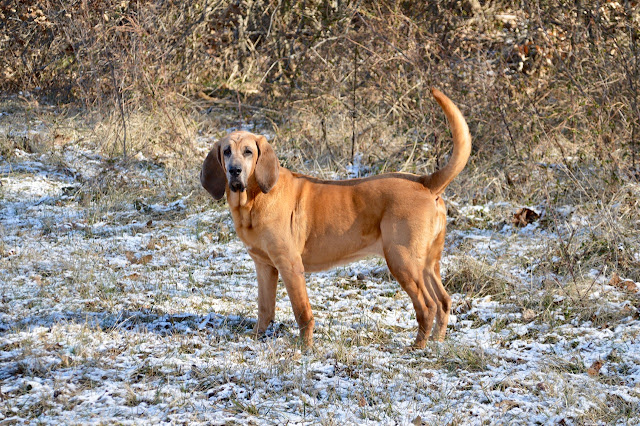 It didn't matter, she not only took off down the edge of the field but caught me by surprise as she went sprinting into the 'no fly zone'. She never does that unless there is deer in the area. I saw nothing in that direction. 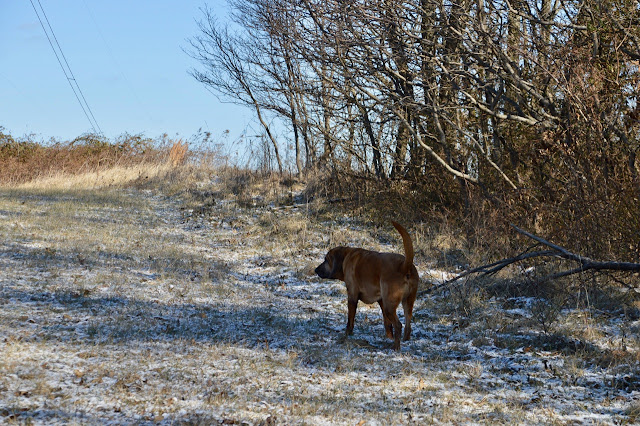 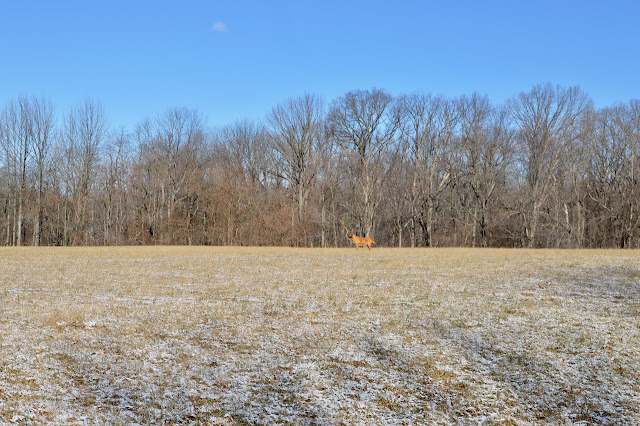 The scent that Sadie was chasing must have been strong because Stella was sprinting toward us. I looked in that direction again but didn't see any deer on the horizon. She smelled something so they may have been over in the woods. 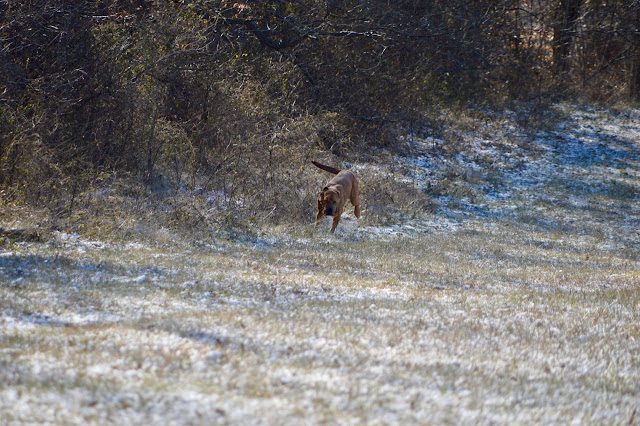 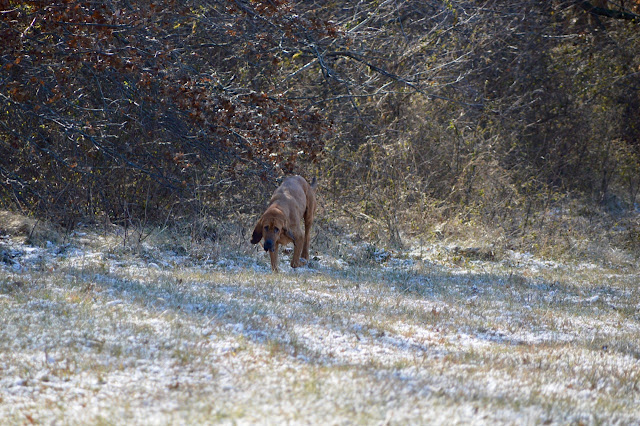 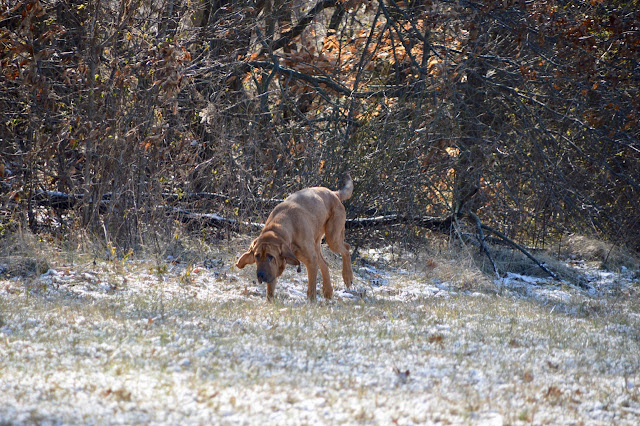 I didn't want to chase Sadie into the next field, the wooded area, with the weather being this cold. So as I yelled her name, she made a big looping run and came back to me where Stella ran over to meet her. Yet, there is something over in that direction that interested them a lot. I had the leash inside my pocket for Stella just in case I needed it, but I didn't have to use to use it this morning. I called Stella's name and said "lets go home" and she headed down the path in a slow trot. 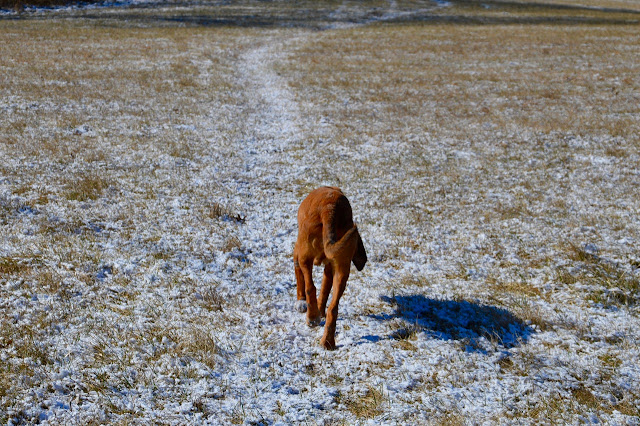 Sadie continued to track different scents all the way home while never getting to far away but never on the path with Stella. Like I have said before, she has a much stronger nose than Stella and has heavy instincts in her natural tracking ability. 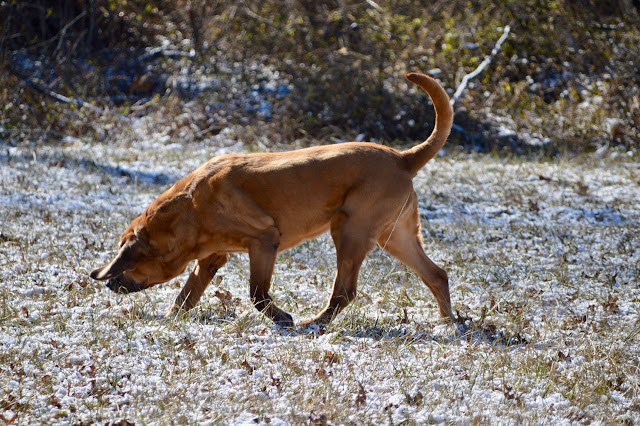 While Stella stopped to scratch ... I wish I knew what was making her itch this past month ... Sadie was still interested in something back in the northern direction. 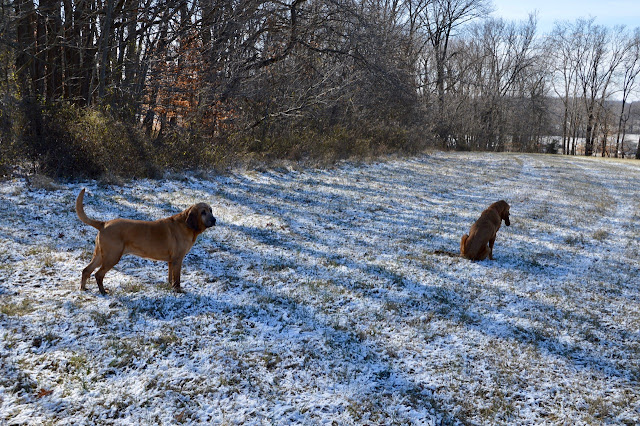 Stella took a short time to check out the neighbor's woods and then turned and trotted toward the house. It must have been the cold weather that motivated her enough to head home with me giving a command. 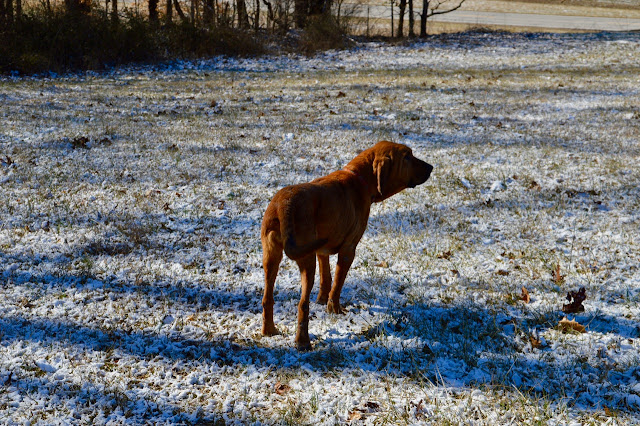 The closer we got to the house the faster they ran. 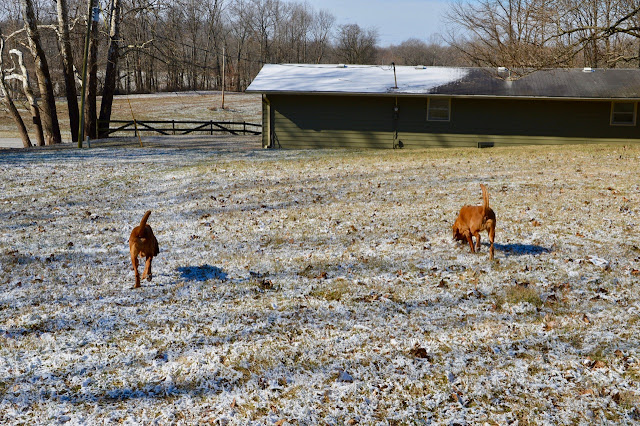 Soon after we got back from the late morning walk, Stella started howling for lunch. That pulled Heidi out of a deep sleep to where she started barking along with Stella ... Sadie just hopped up and down in excitement to eat. A quick trip outside after lunch and I was back to reading books.

Heidi is looking better than she has in a long time. Hair has grown back on her front paws, not all but most hair as returned to her rear paws and is trying it's hardest to fill in her rear legs. Those are places where a vet told me a couple of years ago not to expect that hair to ever grow back. 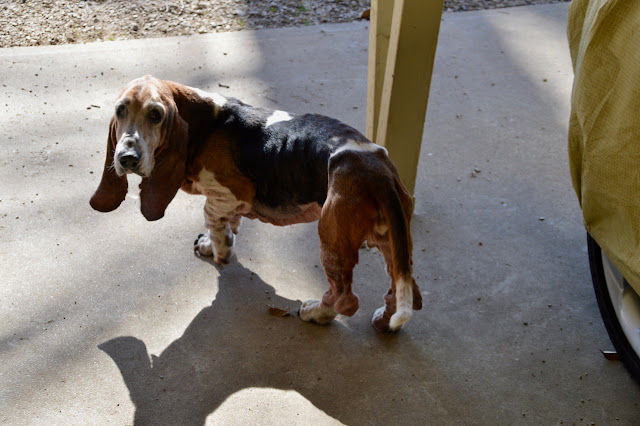 She has shown a lot of improvement after I started feeding her Rachel Ray's beef and rice. Why beef?? She always had had problems with food that had chicken as their main ingredient, so I thought I'd try something with beef. That food had high protein (26%) and high fat (14%). She is also adding a little weight and her coat is soft and shiny. 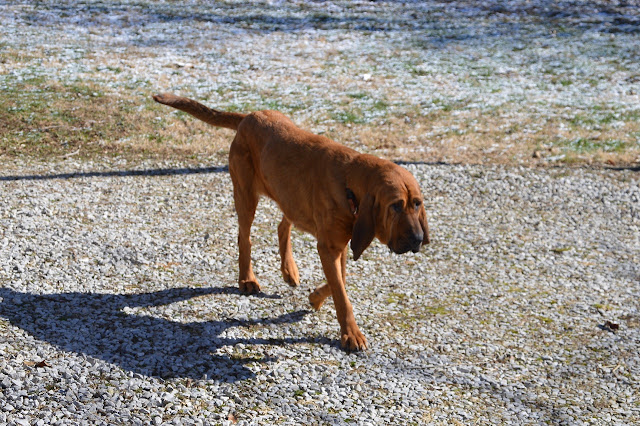 It wasn't too long after lunch where Sadie started letting me know she wanted the 2nd walk of the day. I was reading the other book I picked up yesterday and wasn't sure I wanted to take a walk. We normally take an afternoon walk later in the day but if she wanted to go that bad, then why not? 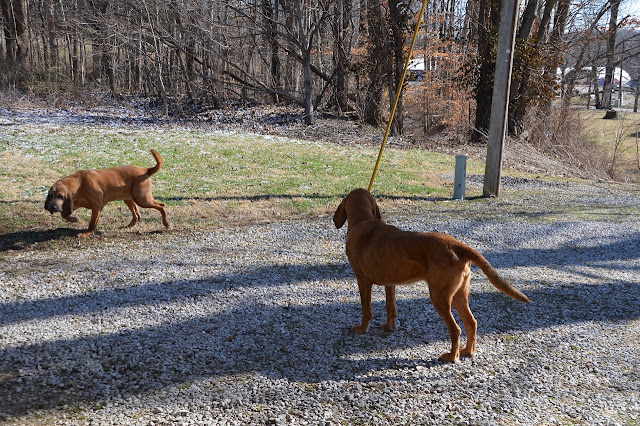 But this afternoon's walk had a problem. It looked inside that Sadie was wanting to walk but that was not the case ... she wanted to eat poop. That never makes me happy, honestly hate it. Stella also wanted to do nothing more than that. 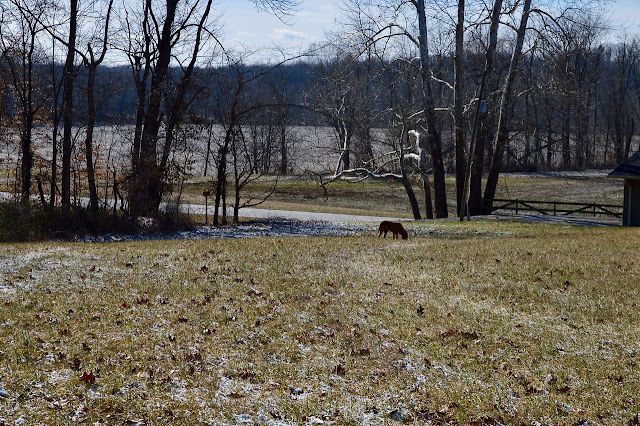 It was such a nice day I continued walking and figured they would eventually catch up with me. But the further I walked, I started changing my mind. Neither hound had moved and I was more interested in reading. 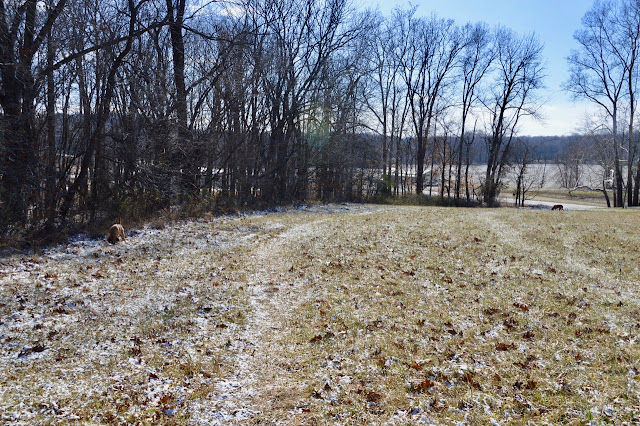 I took a few more steps and decided to turn around. Here I was going on a walk when I really didn't want to. It was obvious that neither hound wanted to walk. They did not even lift their heads when I yelled their names.

So I turned around and headed home. A short walk for this afternoon. (Editors Note: After taking a short 42 mile afternoon drive in the Z4, I hooked Stella to the 25' retractible leash, let Sadie outside and we had a nice late afternoon walk) 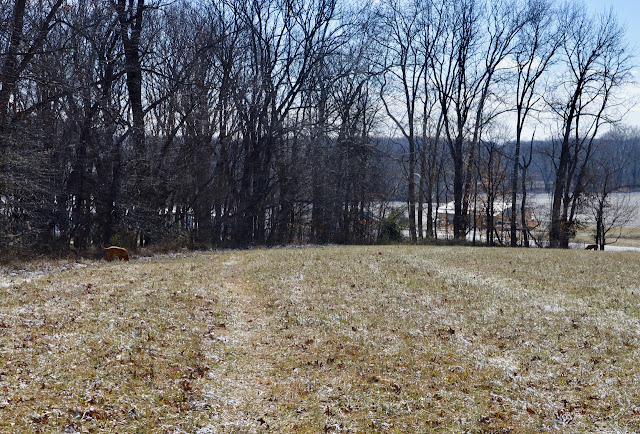 I picked up another John Grisham book at the library yesterday and then noticed when I got home I had three of his paperbacks on my shelf and I don't remember reading any of them. I've bought a lot of books that I have not read. I figure I have about a month left of reading before my focus turns to outdoor activities as the weather gets warmer.

A couple of readers commented yesterday that my red mirrors looked like a sore thumb. I sent both of them a link of all the different mirror covers available and not even the solid black is an option. I did get two email answers from owners that I asked where they got their black covers ... both were part of their new car order from the factory in Germany.

Of course one thing to think about with my ever changing mind ... If I ever decide to go back to the 'stock' look of that model, then I can install the red stripes again and then the mirrors would be part of that standard option. The hood stripes needed replaced anyway because for some strange reason they had deep enough scratches on them, as I was peeling the stripes off, they followed those scratches in a different direction.

Still I like the all black look the more I look at it. Most that have emailed me along with forum comments also like it. One in particular thought with the stripes removed made the Countryman model have a much cleaner look. Whereas the two door coupe models that I had before, the stripes looked good.

You may have noticed a new link up on my upper left sidebar.  (Removed - 2nd thoughts) I don't put everything up there until I look around that particular website and decide if it pertains to what we talk about here and if it might be of interest to our blog readers.

I'll post about that website within the next day or so but in the meantime take a look at puppyspot.com especially if you are looking for a puppy that is not a bloodhound or basset hound. This brought up the question "what breeds are best to mix and match". I'll also post a graphic they have made after their research on choosing different dog breeds to live together.

Since I am a hound lover I've always had bassets and bloodhounds. Although there are other breeds I have been interested in such as bulldogs, mastiffs, and mutts from the shelter. I will say the mini-dachshund that I use to pet sit for my niece years ago, did like both basset hounds and bloodhounds.

I'm going to spend the rest of the afternoon keeping warm and reading books. All of the hounds are sound to sleep for their afternoon siestas.