I had read lately on Ed Frey's Blog he had been eating Oikos Yogurt instead of Greek Gods Greek Yogurt. He may have found that brand of yogurt easier to buy depending on what location he has parked his RV at. With my recent upset stomach problems after I would eat Greek Gods yogurt I decided last night to give Oikos a try. 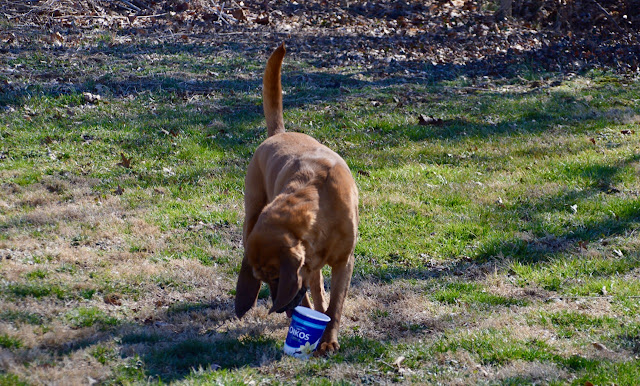 Not only did I like the taste, it also didn't give me any indigestion. Like all cottage cheese or yogurt containers that I have finished, Heidi and Stella gets the first licks inside the container for whats left and then Sadie gets to finish it. With the great weather outside today, Sadie decided to take the container with her this afternoon. 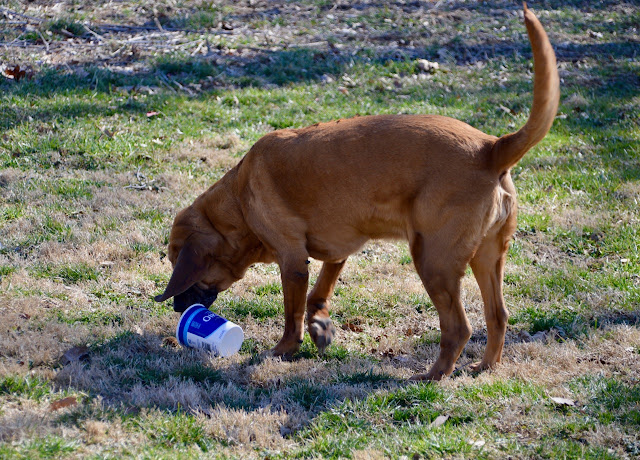 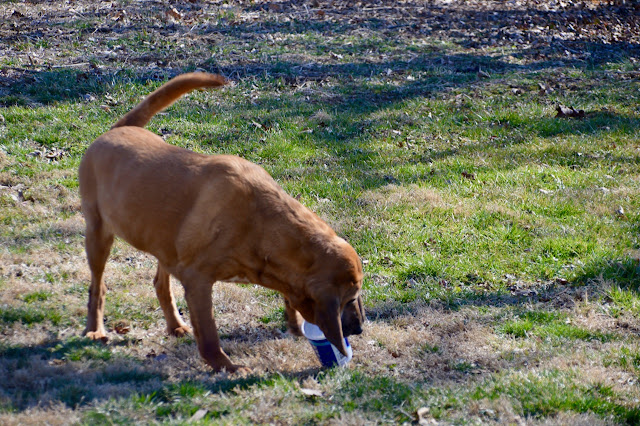 It's gone!! The inside of the container is spotless. 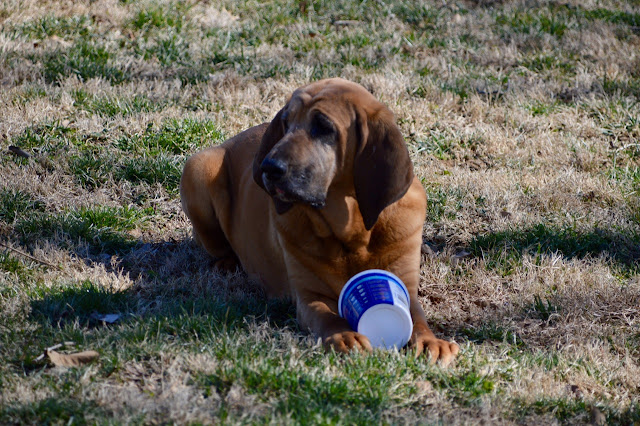 Stella was more interested in other things besides yogurt. She knows that once Sadie has the container, there is no more sharing of what's left. 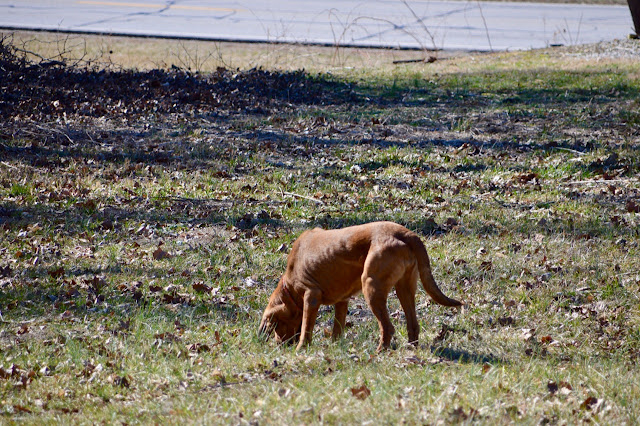 I wanted to get the 2nd walk in right after lunch today because I had plans of putting the top down on the Z4 and taking an afternoon drive. 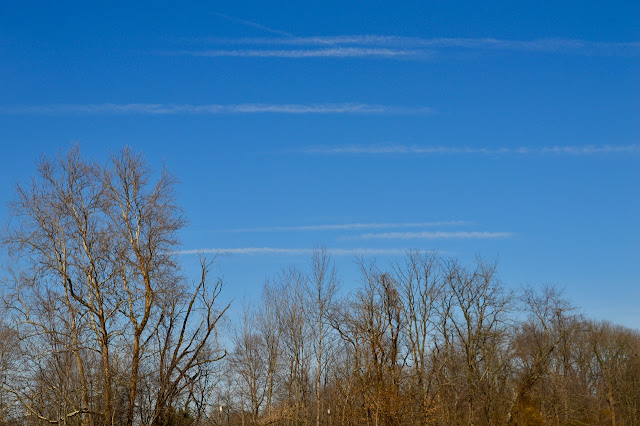 The temps has moved above 60°, warmer than the inside of my house, and I could tell it would be perfect weather for a drive with the top down today. 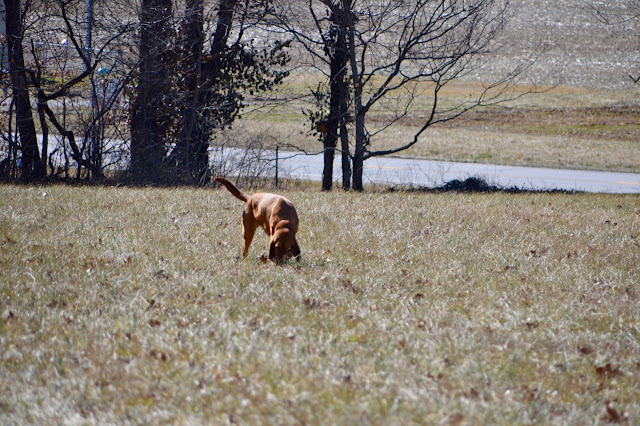 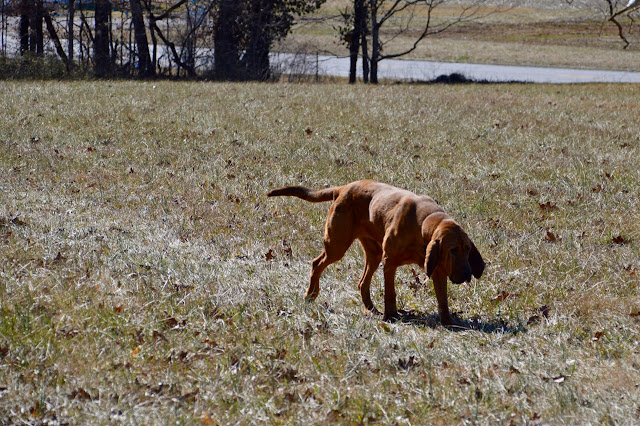 Stella was really interest in what was north of us. I couldn't see anything but she could smell or hear something. Maybe it was the nice new bird house the neighbors have put up next to their yard and the same field we walk through. They are four lots away from us. 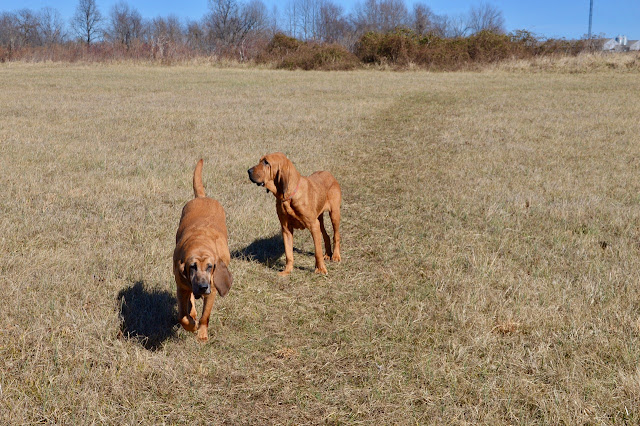 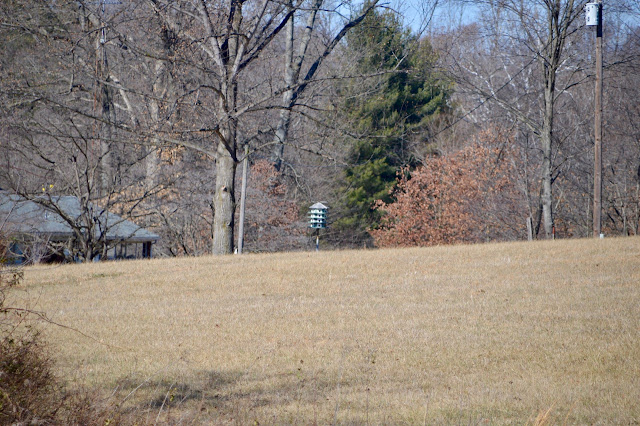 I held the 6' standard leash up in my hand for Stella to see. I guess she thought she was going to get hooked up or I had hooked her up because she stayed on the path behind him most of the way home. 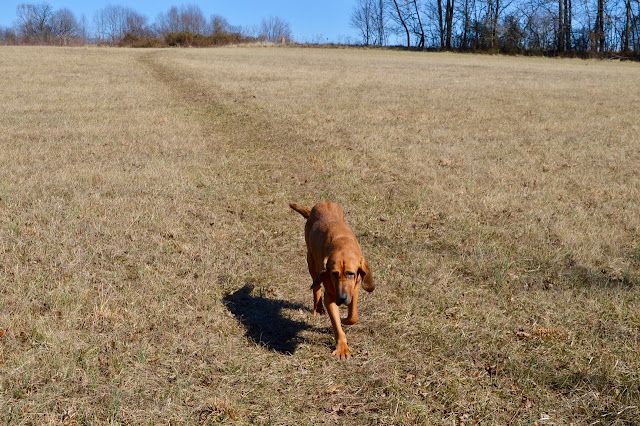 The drive through the country is a mixture of two lane highways and a narrow country road that is designated as a state highway. Over the years I have found where the cops sit waiting for drivers just like me. I keep an eye out for them and adjust my speed accordingly ... there was that summer night a few years ago where the small town cop drove out of a corn field to let me know I was going too fast. He didn't pull me over but flashed his lights at me and I heard the message loud and clear. 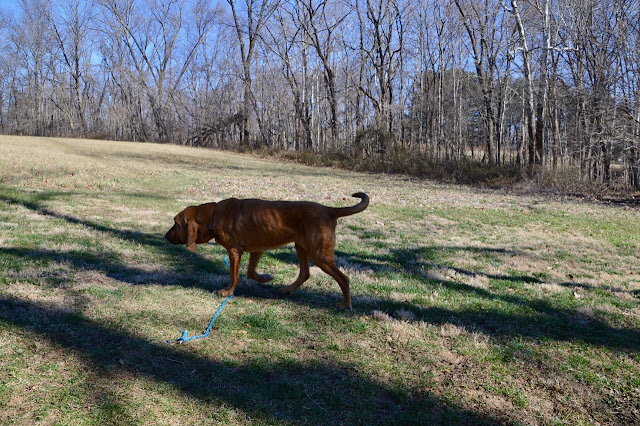 When I returned all of us, including Heidi, went outside to enjoy the afternoon weather. You would think with a backyard plus a 7 acre field to roam, they wouldn't hesitate to get lost ... yet Sadie wanted to stand right next to me. 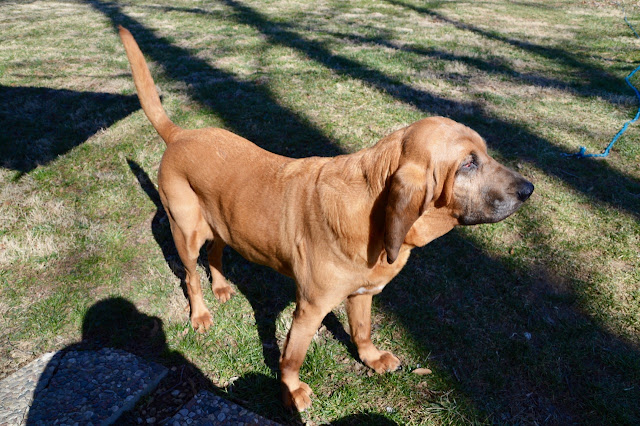 While we were facing the back I realized that Heidi had not moved to the backyard after her trip out front to relieve herself. I found out why ... she had found  the warmest place in the yard, facing the sun. 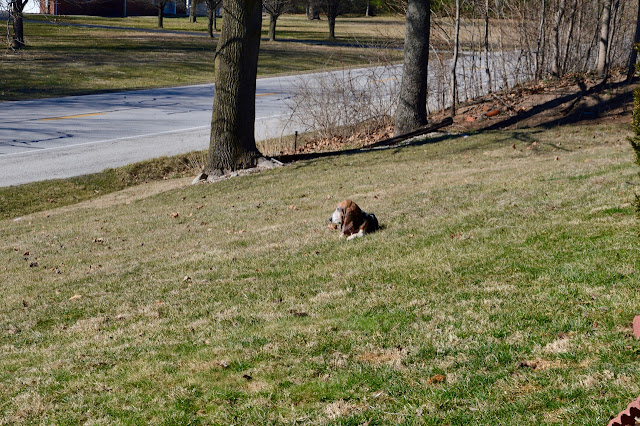 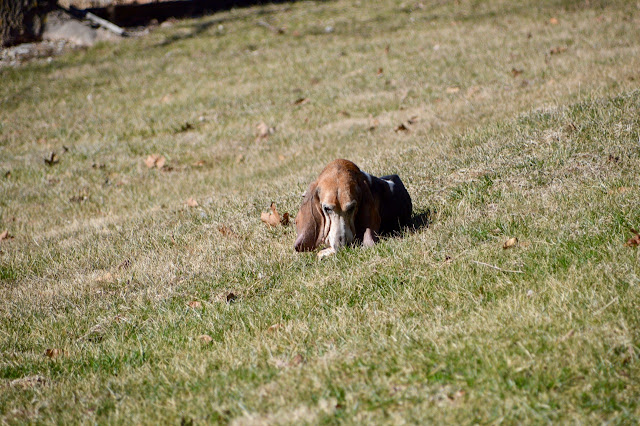 By the time I returned to my chair at the corner of the house, the bloodhounds had moved out into the field like the original plan. 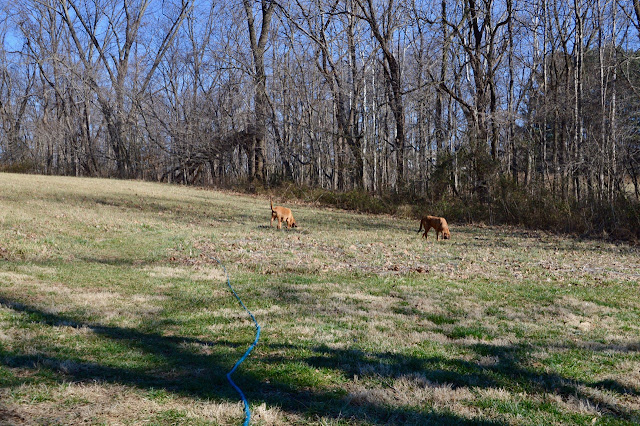 In the six years that I have had Heidi (this July) she has never walked near the highway. She has never ran away or gone to either neighbors yard. Not bad for a hound that had a reputation of "always needing to be leashed" and was noted on their adoption paperwork. 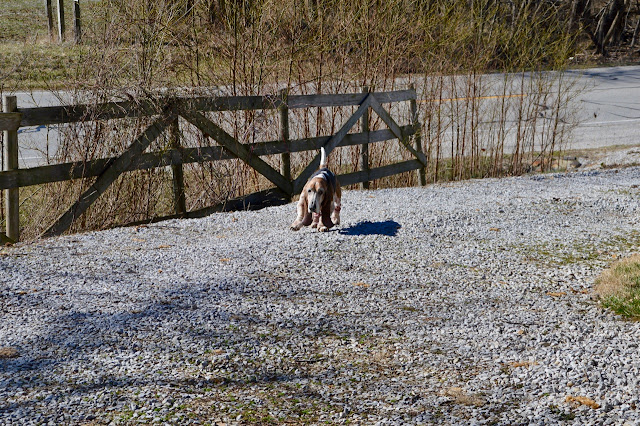 I expect with the weather getting warmer we will be seeing more pictures of Heidi and hopefully some of her taking the daily walk with us. 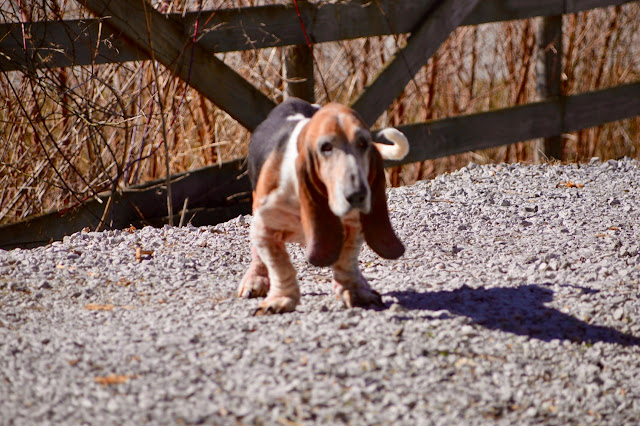 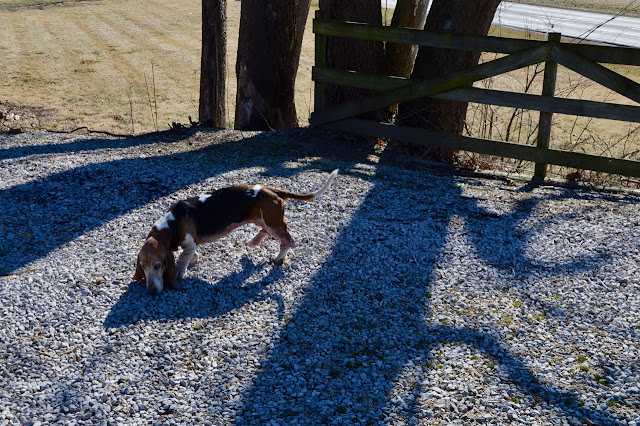 Stella decided the warmest spot in the sun was in the driveway. She just needed to scratch one more time before sitting down. 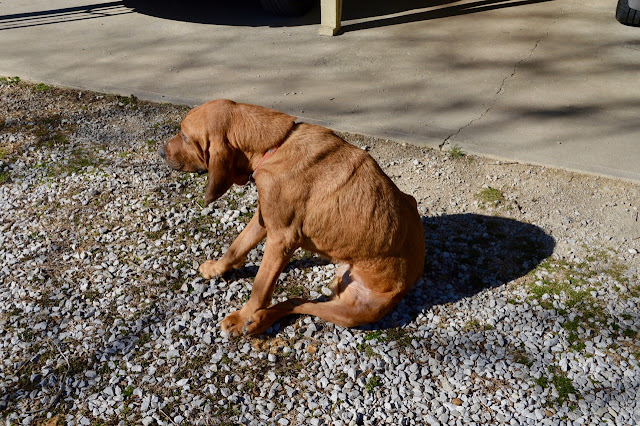 The theme for the rest of the afternoon and evening was water. That's right ... water, as in drinking water. I find myself not drinking nearly enough water, if any at all, during the winter months compared to the summer.

(Editor's Note: We took our 3rd walk of the day about the same time this blog post was published)

It was another fine day here in 'the tropics' of southern Indiana.
at February 17, 2017
Email ThisBlogThis!Share to TwitterShare to FacebookShare to Pinterest
Labels: February Weather, Heidi In Yard, Oikos Yogurt, Water, Z4 Drive