The Hounds Had A Day Off 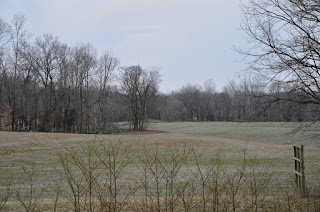 The hounds did not know they were getting a day off yesterday. It was one of the prettiest days of 2017. It wasn't up to them and wasn't their fault.

Sadie really missed her two walks, begged at times but she knew something was wrong. I moved into the 'hound mode' and was forced to hide in bed for all of Thursday. Let just say that the BRAT temporary diet worked well. By this morning I was feeling like new. 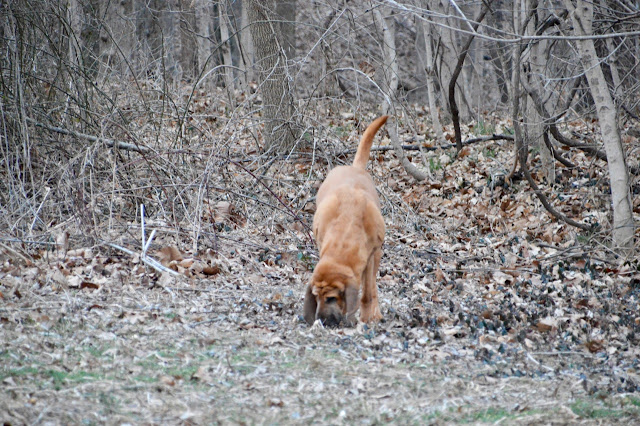 I could tell very soon after waking up today that the hounds would get their two walks in today plus they would be given total freedom to do what they want and walk where they wanted. I also had a feeling with all of that freedom, that Stella wouldn't be completing the walk based on her recent pace. 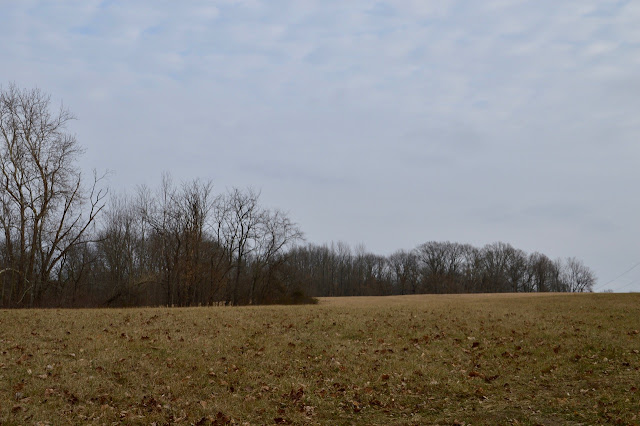 Although Stella did take the lead at the start of the walk. It was cold, like 21° cold but luckily there wasn't much wind. 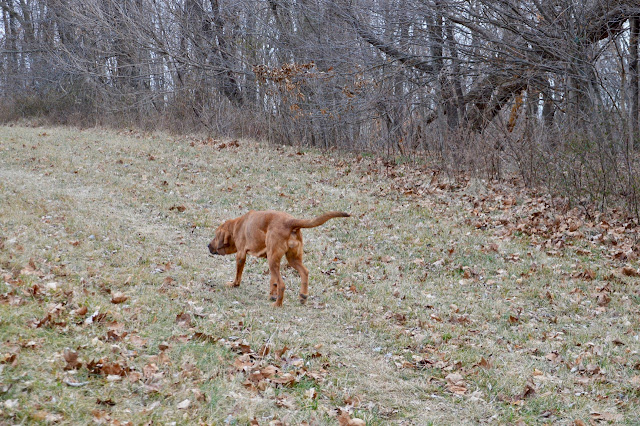 This tree limb has been sitting there since February 2009. How can I remember that date? It was an abnormal warm February night. I was inside with all the windows shut of course watching a ballgame when I heard that tree limb crack and break ... it's the limb I showed a few days ago here where some animal has been eating all of the bark. It was also a limb that is pretty far from house, at least too far to hear that cracking sound as loud and clear as I did that night.

That February night, the wind was stronger than normal high wind was. Based on my straight-line wind damage the previous June I must admit I was a little concerned from what I was hearing but it was so dark outside I couldn't see anything.

I continued to watch the basketball game and was surprised that Directv was still giving me reception. By the next morning I saw just how strong the wind had been. Two houses down down from me a power pole had been broke in half and later that day as I drove around I saw tornado damage to some stores downtown. In February?? 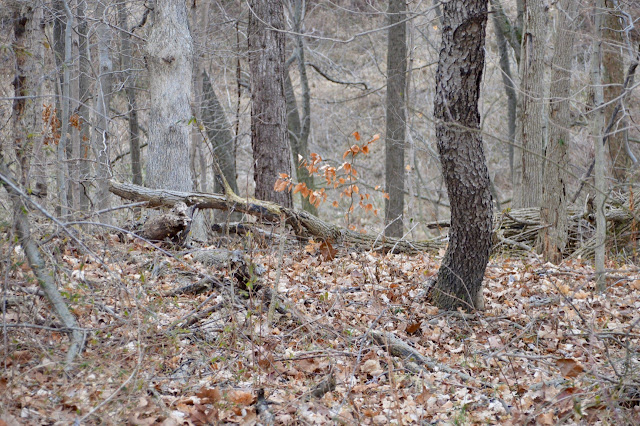 With the day off yesterday, Sadie was in full tracking mode. She was loved being outside again and there were smells she did not catch on Wednesday, so she had a lot of scent to catch up on. As I kept walking the path Sadie would move from way behind me to in front of me ... Stella had moved into the wooded area out of sight the last time I looked. 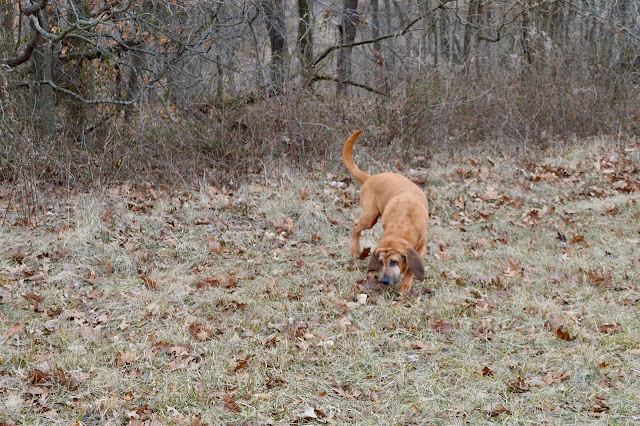 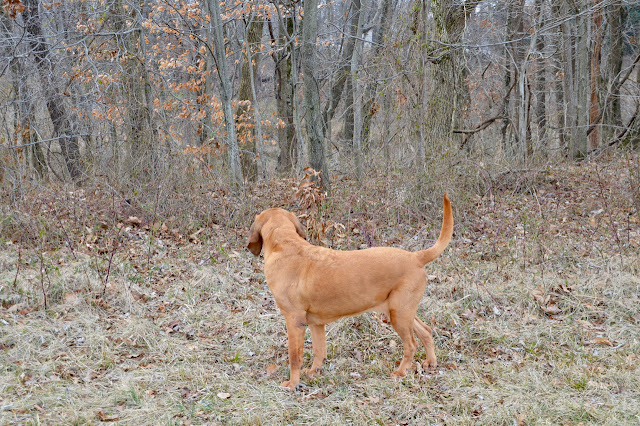 Once Sadie couldn't see Stella, she turned and came running for the first turn. She had other things to find and no time to wait for a bloodhound that might not catch up with us. 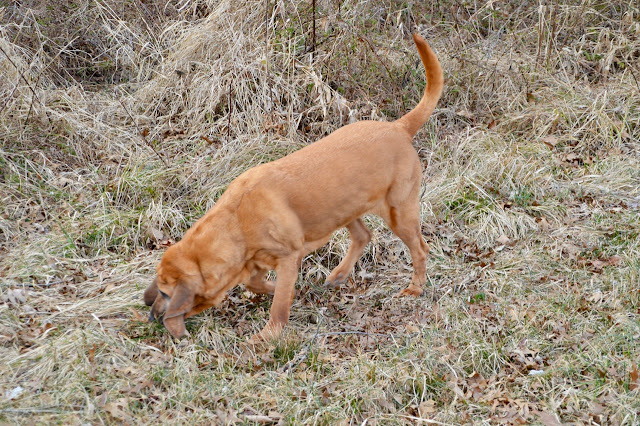 I am not sure if you can tell, but once again I am trying to show just how steep this gully is from the path we walk. I am not sure the hounds could climb back up in muddy to very soft ground if they ever went down that far.

Many years ago Sadie went to the bottom when she 1 or 2 years old. She walked out from the bottom to the road, with mud up past her legs, all over her stomach and neck. It took days and a lot of shampoo baths to get that smell off of her. 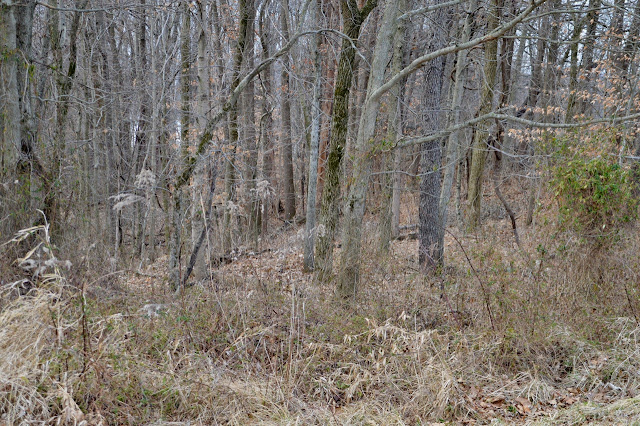 About the time I thought Sadie was heading for the right corner of the field, she turned quickly and took off. I did not see anything that would have mad her move that abruptly. 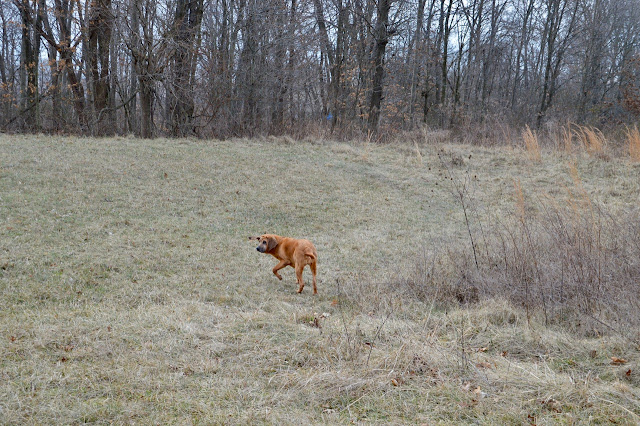 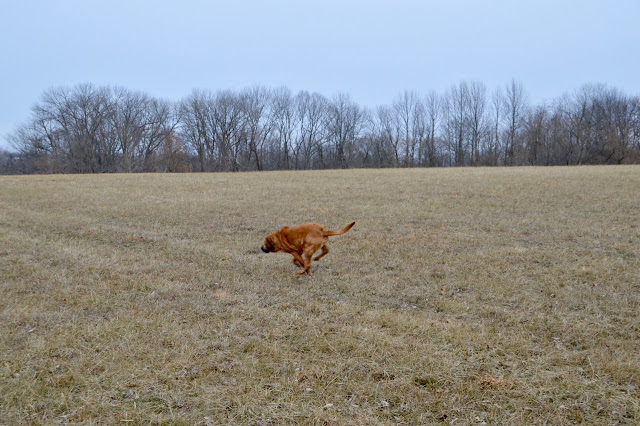 I'm not sure what she had found but she was moving fast enough that some of the pictures are not in good focus. 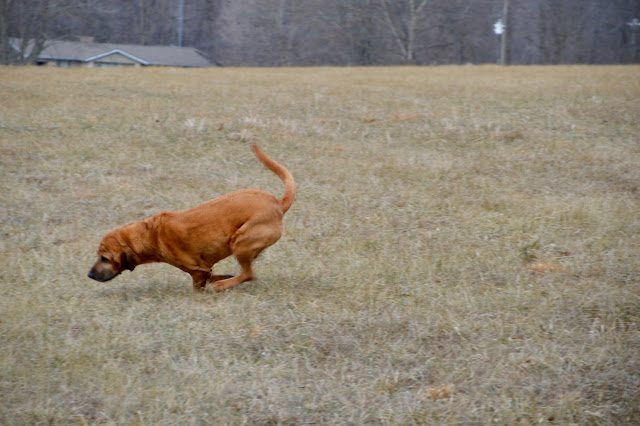 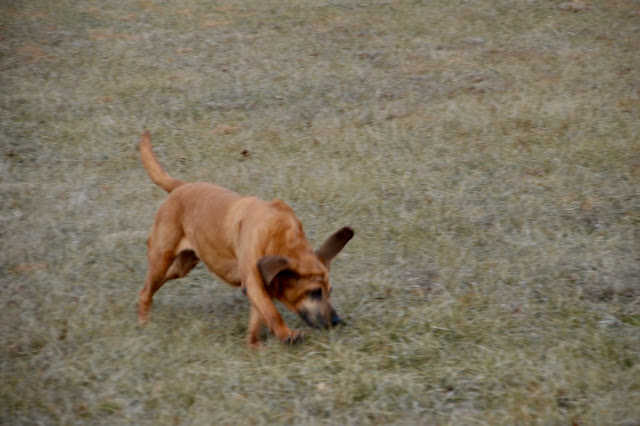 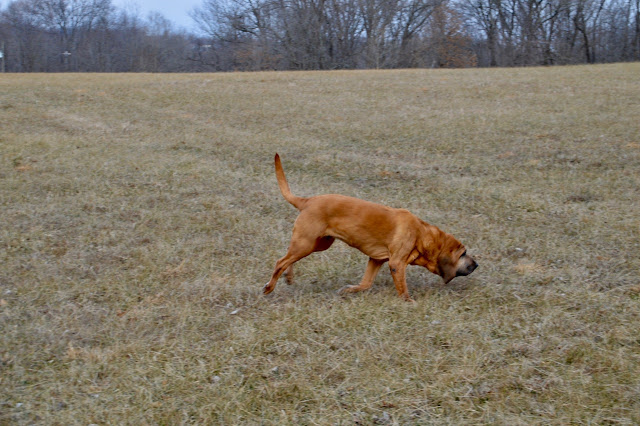 Where was Stella through all of this excitement? Like she had been doing the few days prior, hanging way back and then gradually moving to the center of the field and not even up to the first corner. She did glance up to see where we were and then went back to eating deer scat. 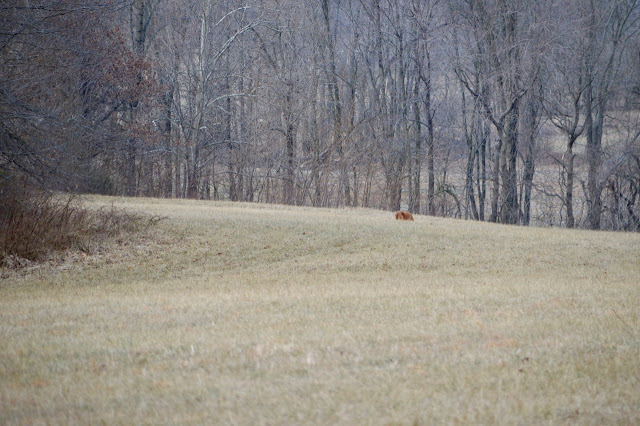 Once again I told Sadie "go get Stella" and she took off with her nose to the ground. Instead of getting Stella back on the path before I got there, she also found something worth not leaving. 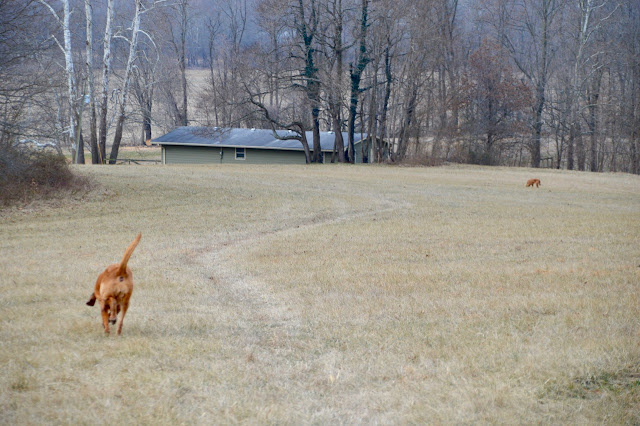 At least Sadie got her sprint workout in for the day. 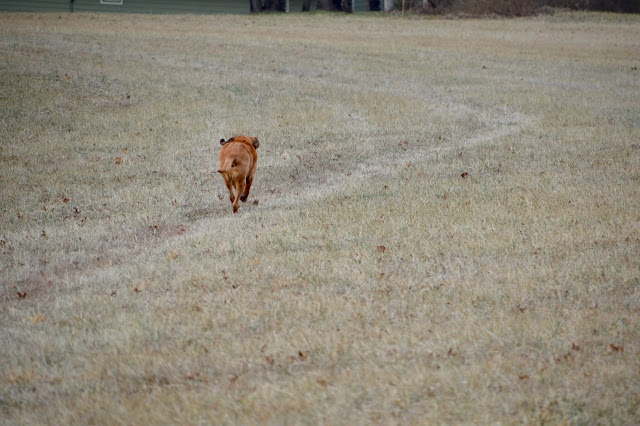 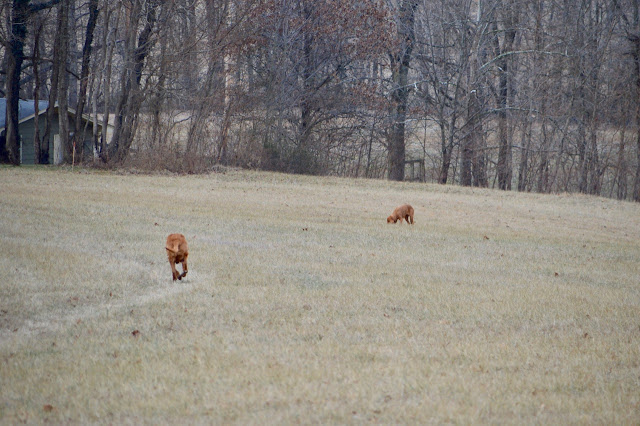 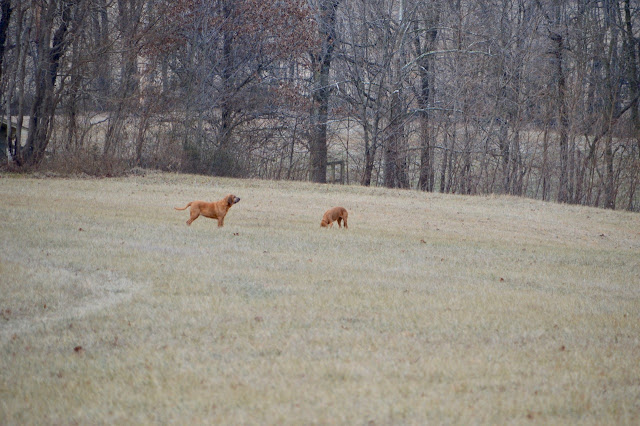 As you can see Stella didn't move the whole time Sadie ran toward her. I am still pretty far away when I took these pictures with the 200mm zoom. 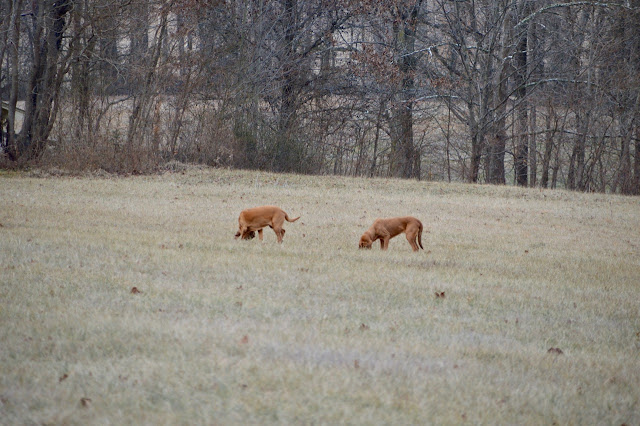 This is where the pictures ended. I turned off the camera, moved the lens back to the shortest position and tucked it under my arm. I reached into my left pocket to pull out the standard 6' leash to attach to Stella because that was the only thing that would get her to move. She even fought me to keep her mouth to the ground while I clipped the leash onto her collar. 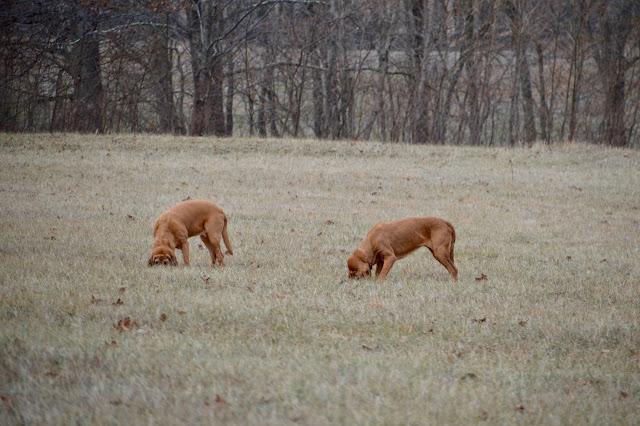 After taking the shortest route home, she still had to stop a couple of times. I had unhooked the leash soon after I got her off of that spot, so she could walk back to the house on her own.

Here are a few pictures from our morning walk on Wednesday. I did not take the camera on the afternoon walk because I was wanting Stella to get a full walk in without spending most of the walk in one spot eating whatever she would find. So she was leashed with the 25' retractable. She is one stubborn bloodhound. 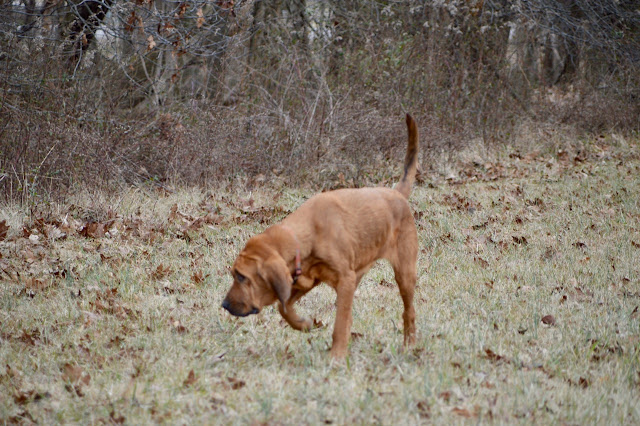 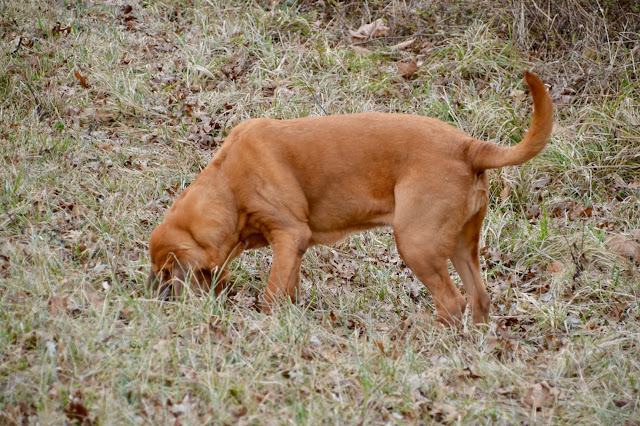 For the first time in along time both of them were in the far right corner of the field in an area where the deer walk to and from the gully. 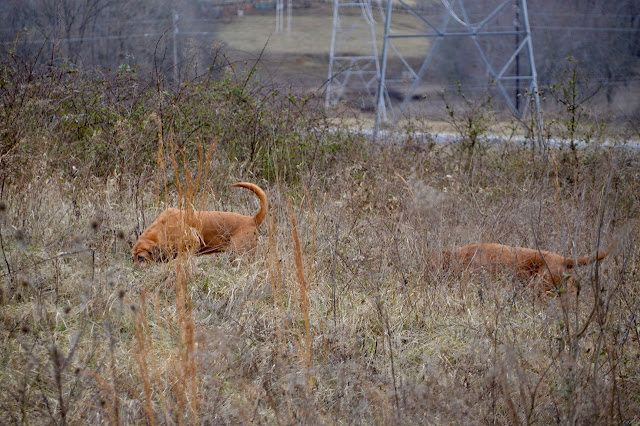 When Sadie is in this pose I know she is serious. LOL 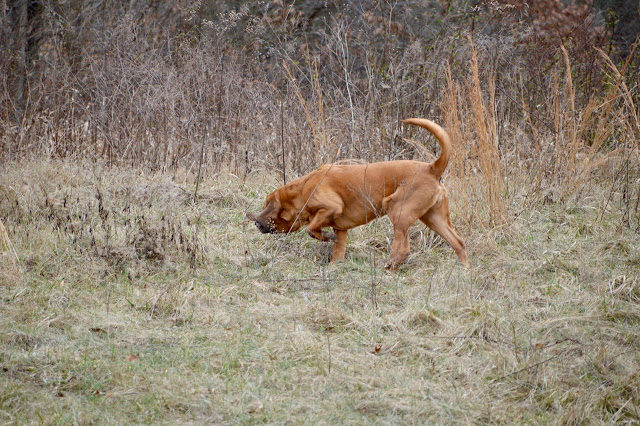 I had to walk over to call for Stella. She was on her way down the path into the gully. I was happy that she changed her mind when she heard me calling her name. 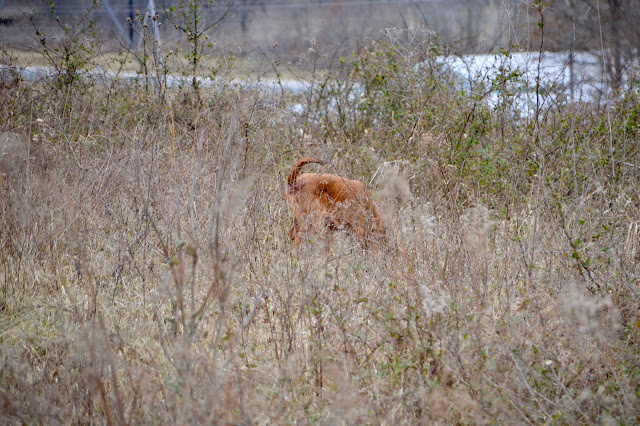 I think she is starting to gain some weight back. I've changed to a different kind of food with more protein and fat for her. I never use nor have been a fan of dog food for seniors but what I had been using for the year for the bloodhounds didn't seem to work for Stella any longer. She must have thought she was going to miss something on Wednesday morning because she rarely runs to the house at the end of the walks. Her normal pace is a very slow walk, dragging her front paws with each step. 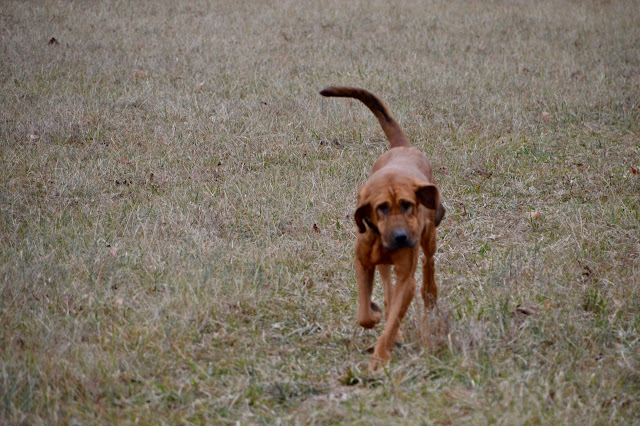 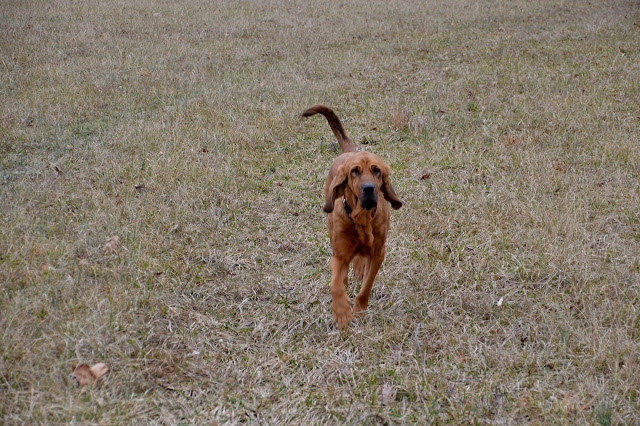 I feel a lot better today than I did 24 hours ago so that's a good sign for a Friday. By late Wednesday night I had finished my 2nd book checked out from the library. I need to change the subject matter to something more light ... I think I am going back to fiction for a while.

I deleted my Wordpress blog a few days ago, maybe last week, I can't remember. Just like always this morning I wished I had that blog back. Wordpress is different than Blogger when you delete a blog. They do not give you the 60 days or so to change your mind. Once you delete your blog from their .com site, it's gone.

It's no big deal really. It had the same pictures I took for this blog. What was nice it was only a few sentences of content and then 4-10 pictures. It was fast to post, I liked the themes Wordpress offers much better than Blogger and a clean look. But it rarely had any visitors. How many blogs can someone have with the same pictures, so I deleted it.

I have the urge to build another Wordpress blog. You know how I like to change templates sometime, I guess this is one of those times.

It might be cold but the sunshine is out and that is always nice here in 'the tropics' of southern Indiana especially in February.
at February 03, 2017