A Deer The Hounds Never Saw 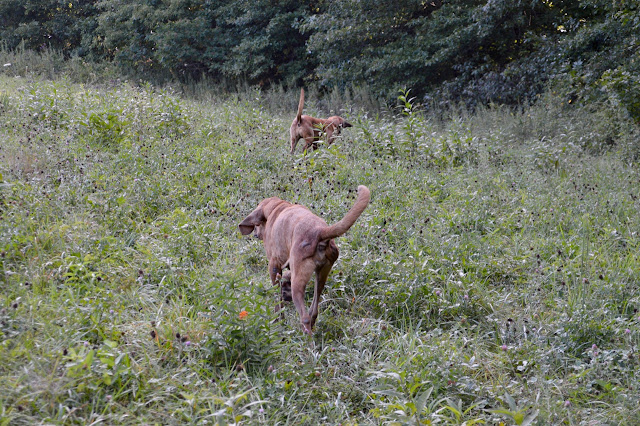 After Saturday's 'excitement' with Stella it would be hard to imagine something out of the ordinary happening on the Sunday morning walk. I was still going to let Stella run free but if needed, I would be 'herding' her in our direction and not letting her stay behind on her own.


It's hard to imagine how nice those woods looked yesterday after we stepped inside to look for Stella based on our point of entry. 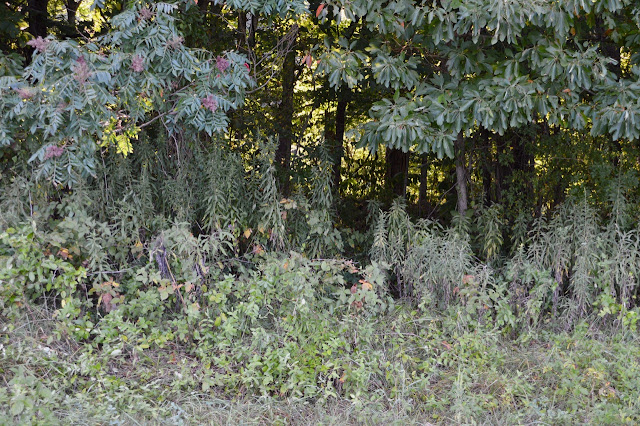 Today Stella was not interested in hanging behind during the walk. In fact she was not even interested in staying at my slow pace ... she and Sadie took off trotting around the corner and out of sight. By the time I made that first slight turn on the path Sadie was out of view and Stella continued her trot. 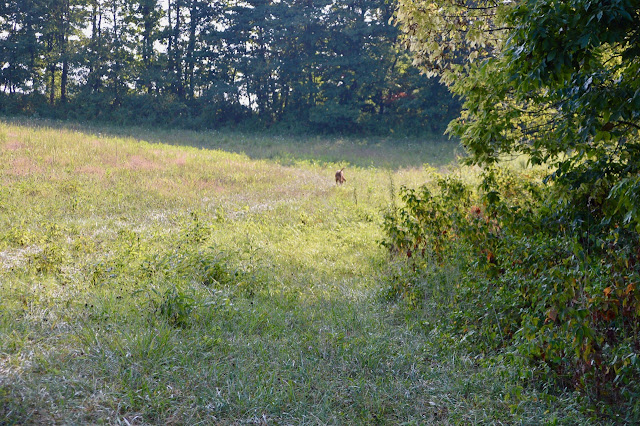 They stopped at their normal point of interest while I approached them. I was sure they were starting a deer chase by the way they took off running as we approached the first turn ... but they wanted to eat as much deer scat as they could before I got there to stop them. 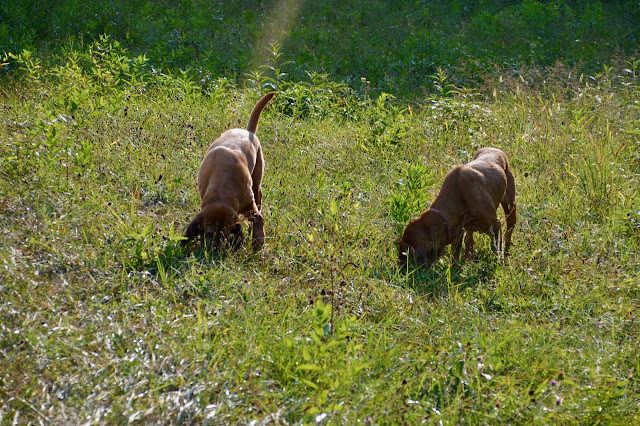 Without any coaxing, verbal commands or herding ... Stella stayed out in front with Sadie. Fresh deer scent filled their noses and that kept them busy for most of the walk. 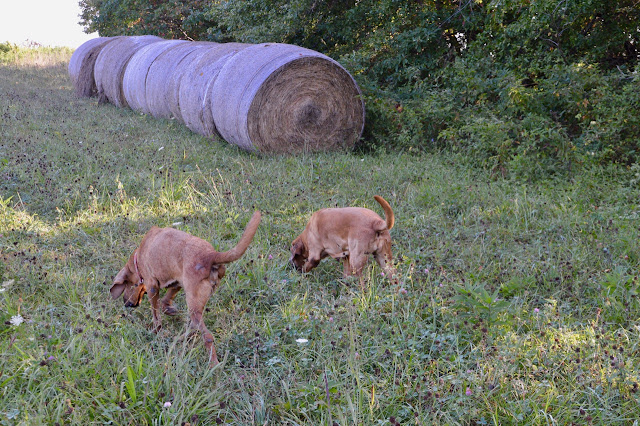 Sadie became a little more excited as she tracked the edge of the field, more than normal, so I started scanning the horizon along the north woods. I was almost certain the hounds were about to take off running on me by they way they were acting. Deer scent was obviously strong this morning. 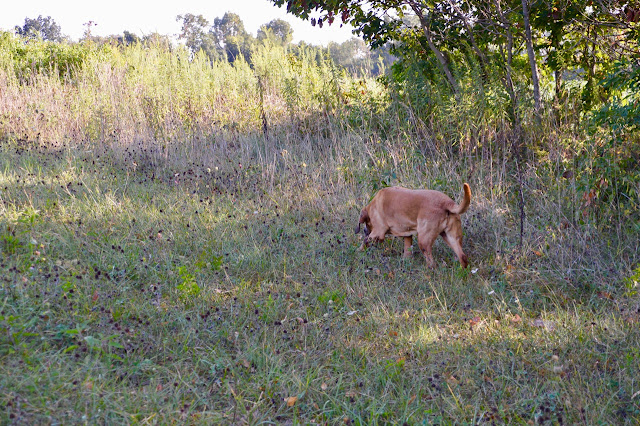 Stella stopped immediately just as we made our final turn home, where I almost walked into her because I was already seeing a surprise on the horizon. With her standing right in front of me I couldn't get a good picture of her head cocked, her ears upright like a 'normal dog's ear' and her nostrils moving .... what I saw on the horizon I had no doubt that the hounds were just seconds away from sprinting after the only deer I could see. 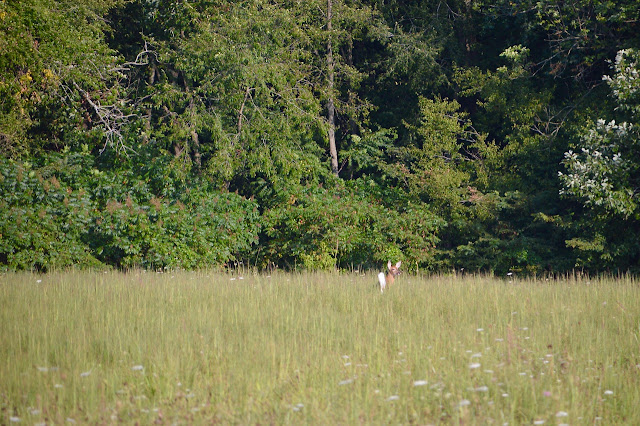 It was shocking to see Stella not move. With each beep from my camera autofocus, the deer's ears perked up. I am sure she could smell predators in the area ... but she was just as curious about me as we were of here. Sadie never moved from my left side. 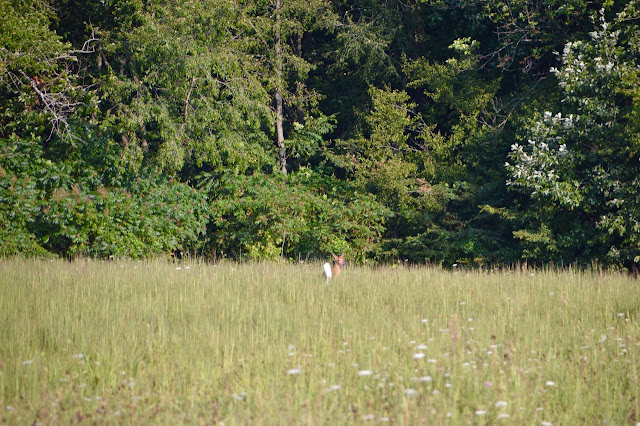 I was in shock that both hounds did not take off based on what their noses picked up. 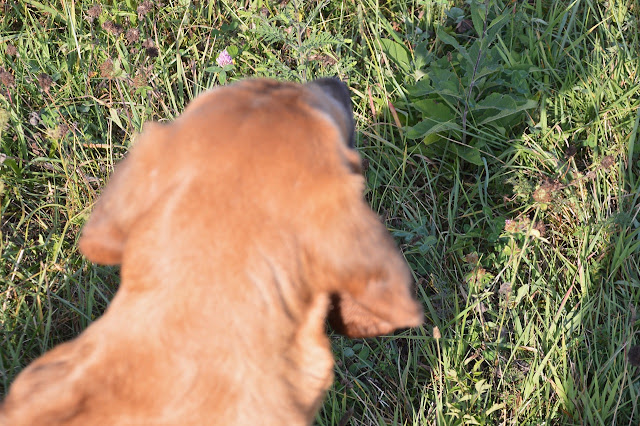 It was also surprising that the lone deer didn't take off into the woods. She stood looking in my direction, then would look at the woods. When  my camera beeped, she would turn her head and look back at us again. 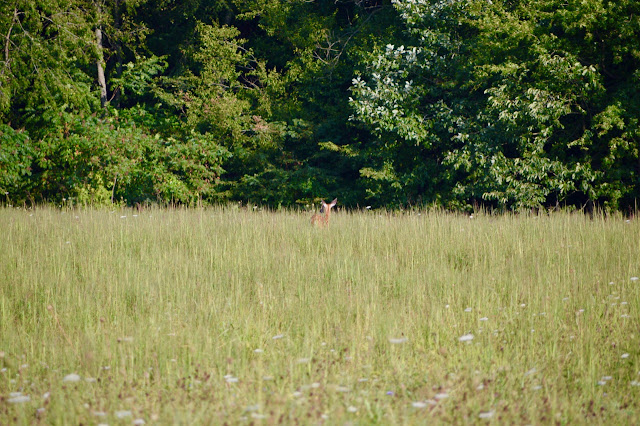 At this time Sadie and Stella are walking toward the house on the path, showing no interest in chasing the only deer in the field. One final check to see what that sound was, looking right into the camera. 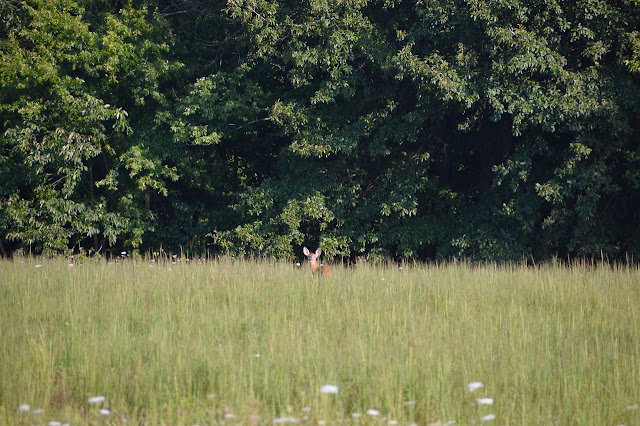 I didn't make a sound. The hounds didn't make a sound and she still had not moved since the time we saw her. I only wished I had a 300mm or more zoom lens because the 200mm I was using was not getting me close enough to this curious deer. 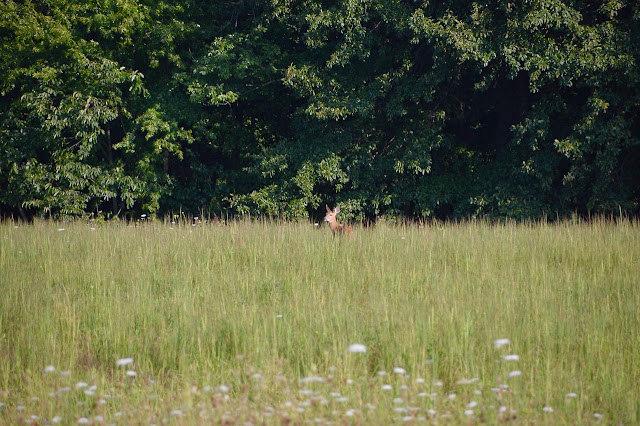 Finally she takes off to hop into the woods. I took picture after picture of her running and hopping and still did not catch a good shot of her airborne. You can barely see her running down the slight incline into the wooded area. 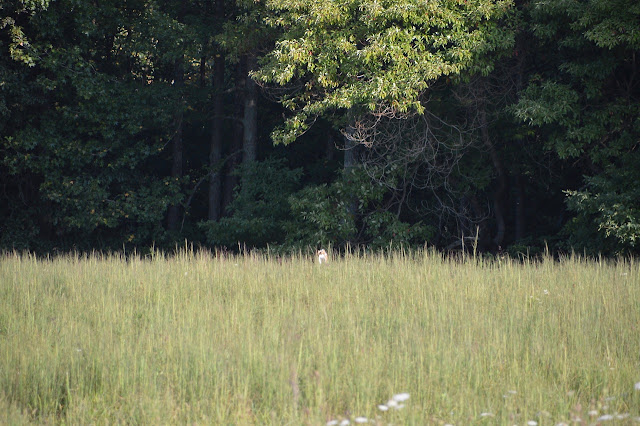 After Stella relieved herself she came trotting our direction and showed no signs of taking off in the direction of the deer. 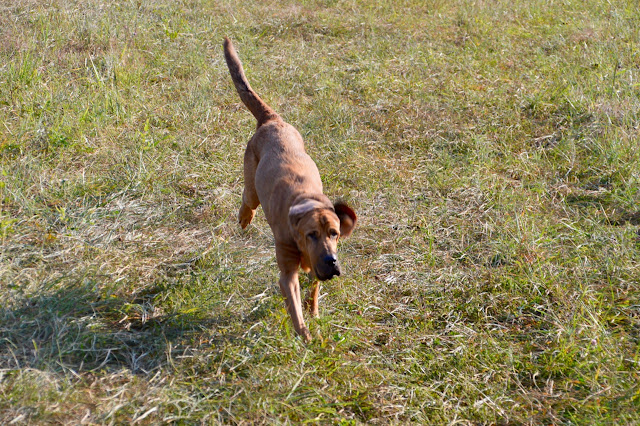 She passed me and caught up with Sadie for the walk home. 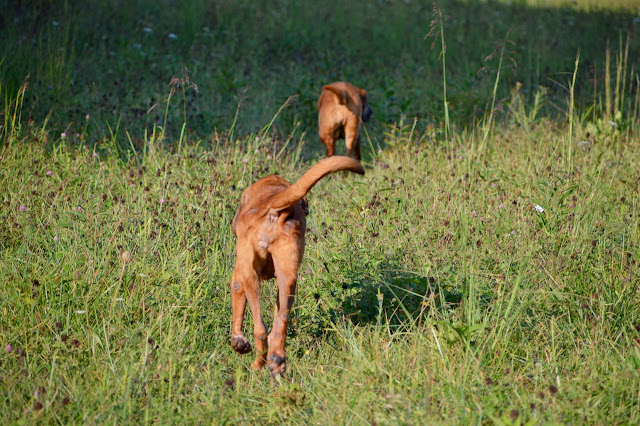 Whenever she cocks her head like this I always think there is deer up ahead or if it is in the direction of the woods behind the neighbor's house I add the possibility of the large field cat. 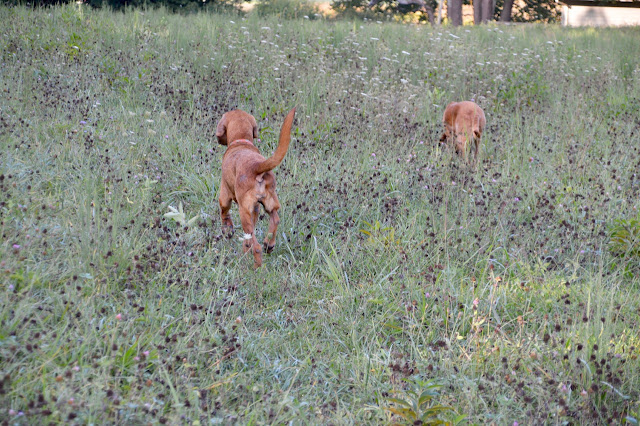 Sadie may have smelled the deer and might have known it was standing within distance of a chase but she was more interested in exploring last nights field traffic all the way into the yard. 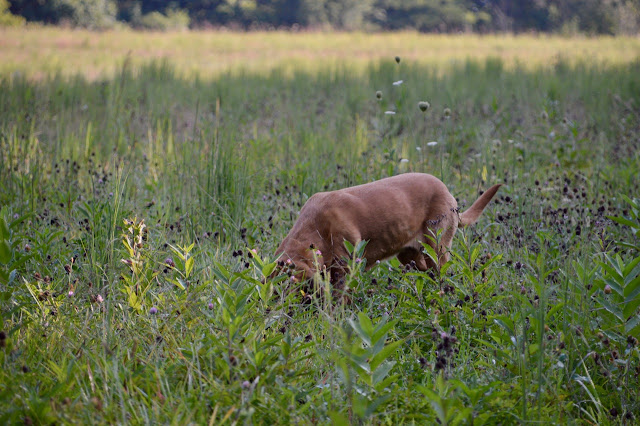 I am not sure what those sounds are I hear at night with the windows open, in the hours past 1am but different animals are definitely talking to each other. 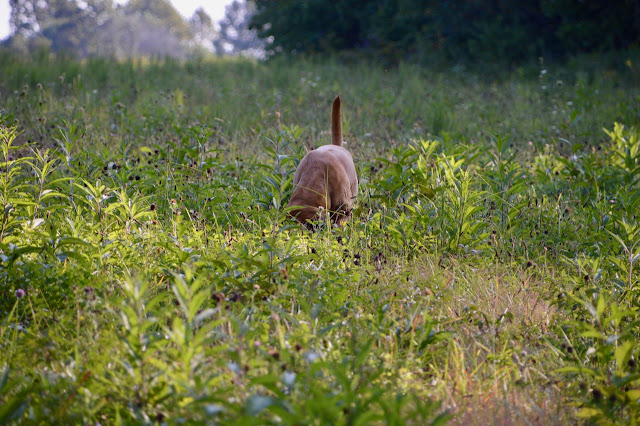 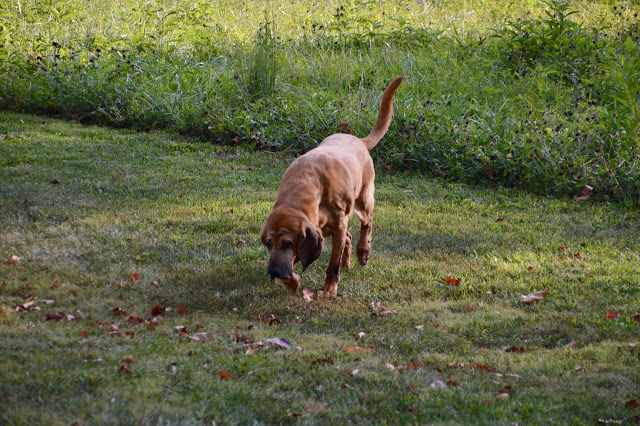 Looking back at pictures from one year ago, I have noticed the field is nowhere near as tall as it was in 2016. This leads me to believe they will NOT be cutting the field before the winter. The kid that cuts the field was also working for the local electric company that trimmed my tree away from the power lines a few weeks ago. He told me then they cut this field as a favor for the owner. It didn't sound like they would be back this fall since they had only half the normal amount of rolls of hay in July.

With September and the fall season approaching tree leaves are starting to turn colors and there are less flowers in bloom. It's nice to have zero mosquitoes but I wish the butterflies were still around. Here are a few flowers that are still surviving in the month of August. 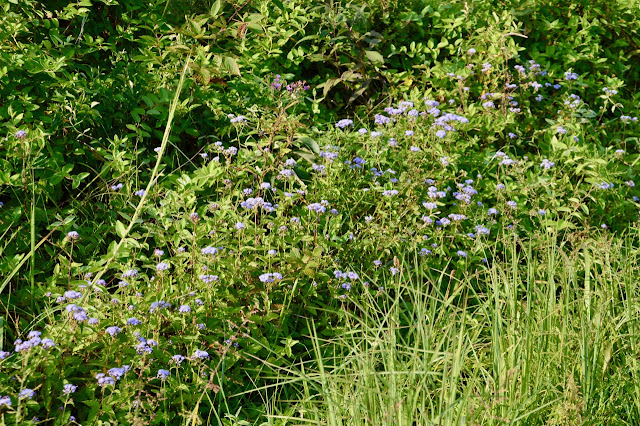 I am not sure what these are. It looks like they would spread and cover a lot of my flowerbeds if I were to replant a few. I am not sure that is what I want in front of the house so I'll leave them there. 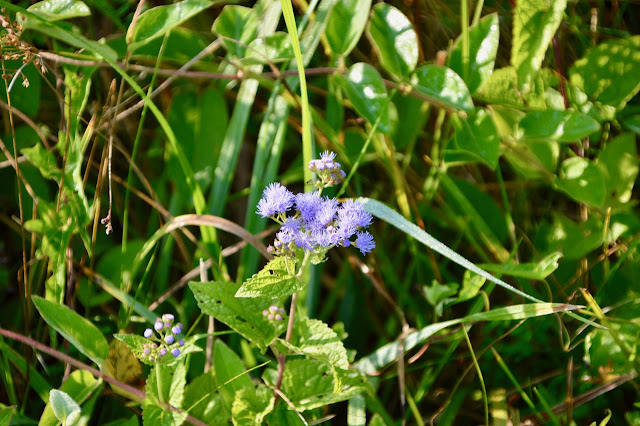 This is on a stem about 4' tall. It's a nice color of purple but I'm not interested in having that in my yard anywhere. 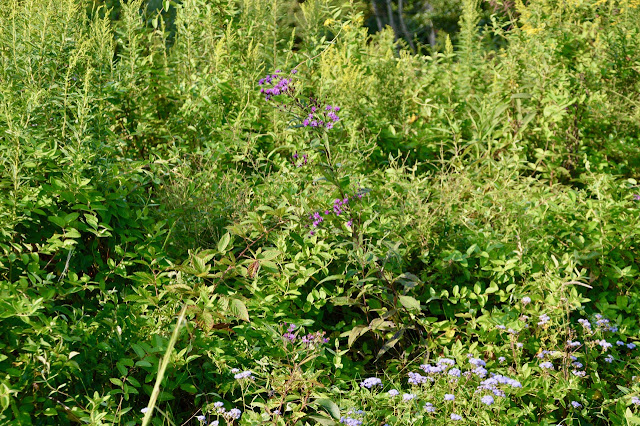 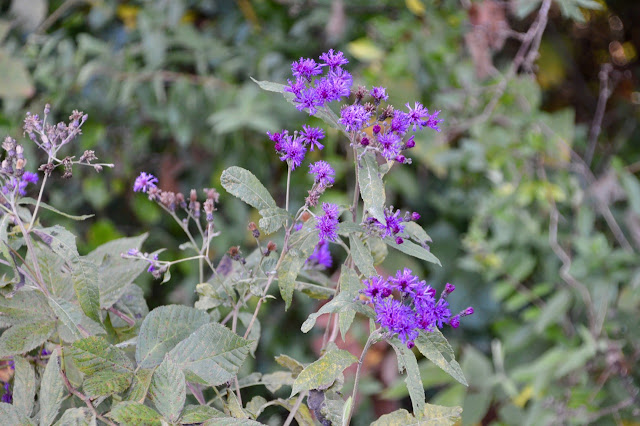 With everything green it's always nice to see some bright colors scattered throughout the field. There are not many yellow daisys left. 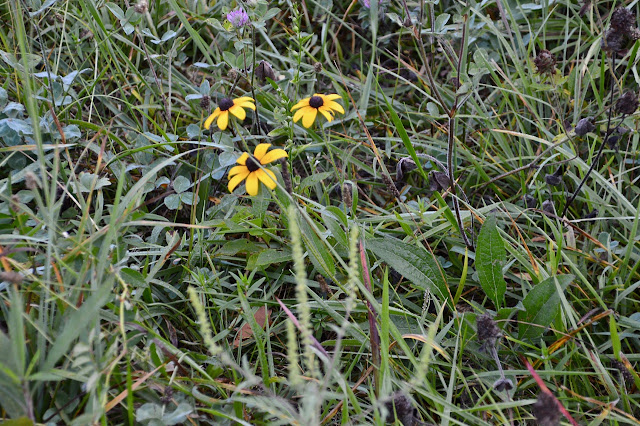 I am not sure if any kind of weather kills this off. 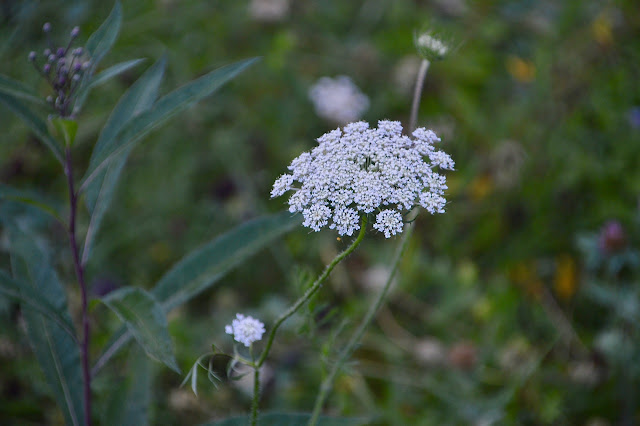 With great weather continuing we have been getting in 3 walks per day. I am not sure why but in the afternoon walks I rarely take my camera and usually have Stella on the retractable leash. Sadie enjoys all 3 walks with the same excitement, where Stella acts tired during the 3rd walk.

I was surprised Saturday night with college football on tv. I thought the season did not start until this Thursday. While I was trying to watch two NFL preseason games at the same time, plus check in on the Reds baseball game ... I found three different college games on different channels. They say this year, college football will be on tv every day of the week including Sunday, which is normally reserved for the NFL.

It's all money driven for the "Power 5" conferences and more exposure for the smaller schools.

As much of a fan as I am for college football I feel it is wrong to be playing on Friday nights, which is normally a night nationwide for High School football. The BigTen conference has become so greedy this year in making even more millions of dollars, that they will be playing college basketball this winter on Friday nights, which is also a night for High School basketball, at least in the state of Indiana.

I don't agree with colleges playing either sport on Friday nights.

After not quite a week of using the 'beta' version of Apple's new macOS on my desktop and laptop computers, I have had zero problems and enjoy the new features in Photos editing along with the faster loading Safari browser.

Yet with Google Chrome's Data Saver ... I use a lot more data when I use Safari. With my 20Gb of data per month, the Google Data Saver is saving me between 7%-10% which over a month's time is 1400Mb or roughly two days worth of data at a minimum.

With great weather and less time spent on the computer these past few days, I have been motivated enough to cross off a couple of things on my 'to do' list. By the end of the week I'll have most everything finished I think for 2017's list. So it will not matter that I screwed off most of the summer ... LOL

Heidi is alive ... but totally refuses to have pictures taken of her. She has spent time outside enjoying the sunshine until she sees me with camera in hand. She is doing well though.

Will there be anymore excitement here in 'the tropics' of Southern Indiana after having some two days in a row?
at August 27, 2017