The Hounds Adjust To Hotter Weather 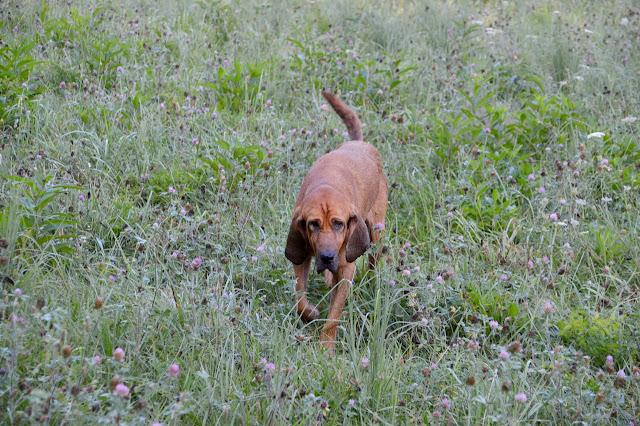 Those cool August temps were nice while they lasted. This week we are headed back to the normal high 80's. Therefore all three hounds made some adjustments to their schedules yesterday. Heidi slept more than ever. Sadie didn't bother me for an afternoon walk until early evening and both bloodhounds found the kitchen tile to be the coolest place to sleep the afternoon away. 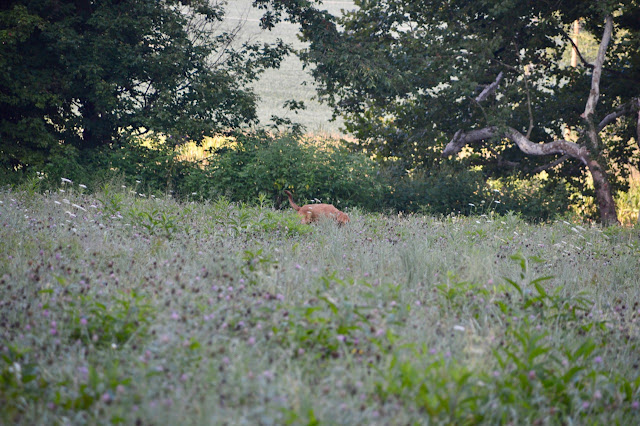 Starting our Tuesday morning walk a little later than normal I found the light to be better for taking photos. At least I thought I did. Stella decided to take a whole different approach for her walk. She stood by the butterfly milkweed for a long time and then slowly ... I mean really slow ... headed for the neighbor's woods until I called her. 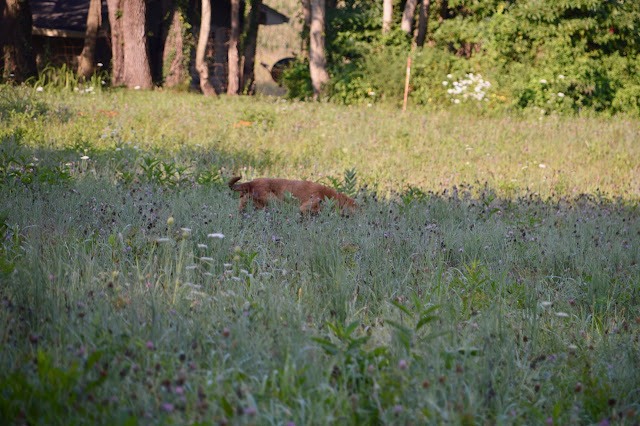 You can see her direction by where the property pole stands. I could tell that she had no plans to go with Sadie and I. I was about to let her do what she wanted but decided it would be better if I were to call her and then wait for her to catch up with Sadie and I. 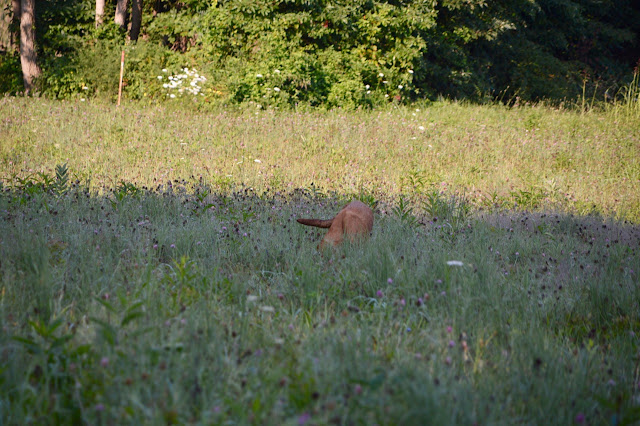 I was surprised she actually decided to head our direction, like she has for the past few weeks. 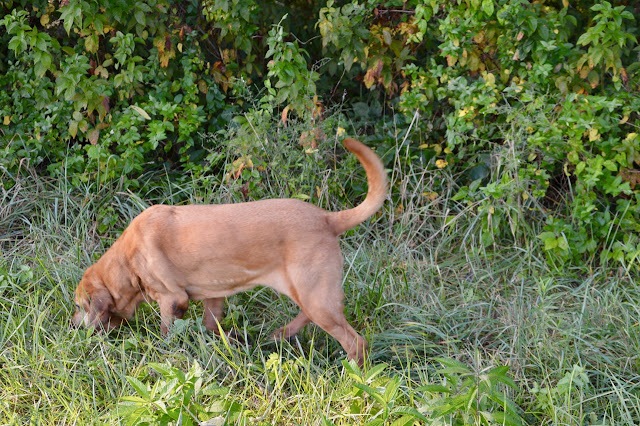 Sadie was on her normal tracking exercise. Every day, every walk ... she never changes. Stella stayed on her own but had a gradual path to follow our direction. There are a lot of things she likes to check out in the middle of the field. 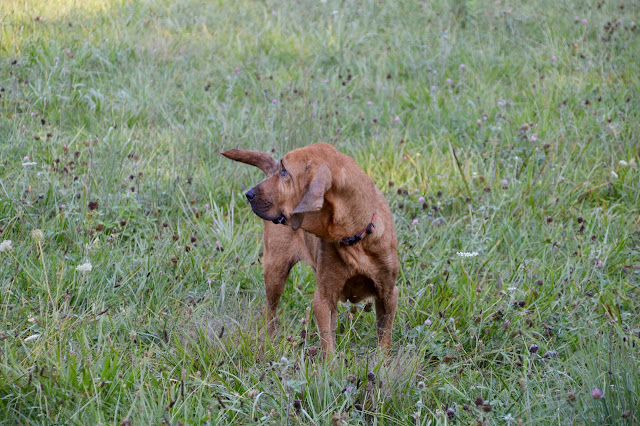 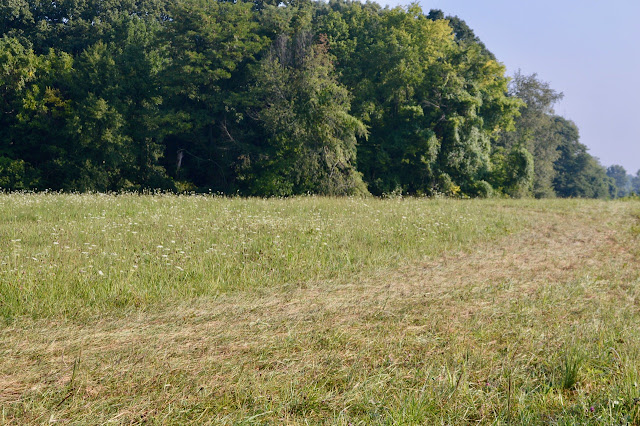 More ATV racing took place late yesterday afternoon about the time we were heading out for a walk. We turned around, went back inside and waited for the excitement to die down. There is no way I want the hounds around ATV's that are going full-speed with young drivers. 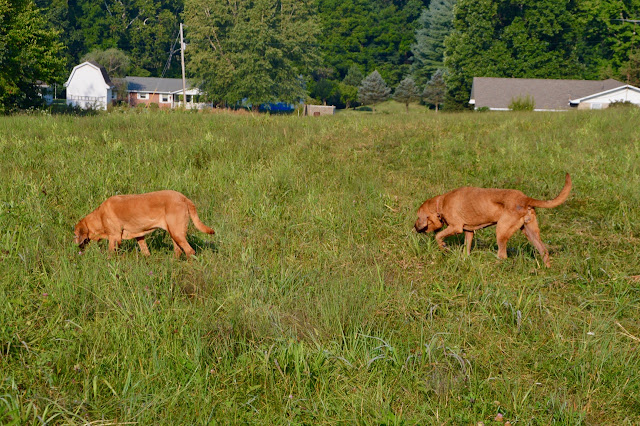 Stella looks like she is finally regaining most of the weight she lost at the start of the year. The food I give her is still the same, so maybe she had the flu. 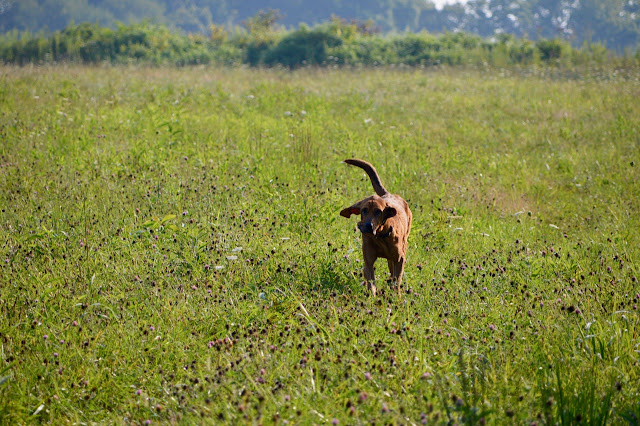 Every walk when we make the final turn toward home, Stella will sit and start scratching herself. Same place every walk??  That is why I think it is more of an acquired habit instead of an allergy. 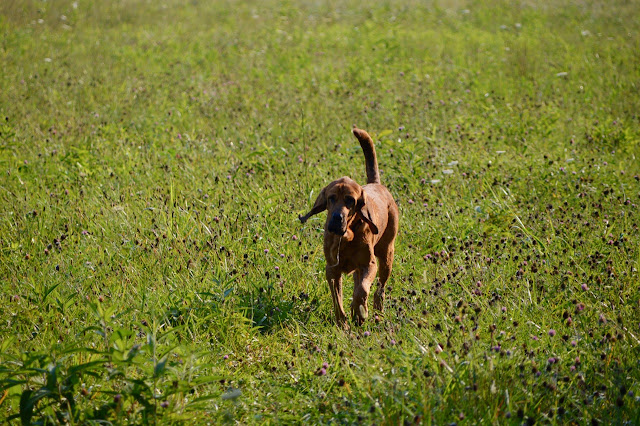 When she is finished she will trot or run to catch up. This morning it was closer to a slow run rather than a trot. It's good to see her doing more of that. 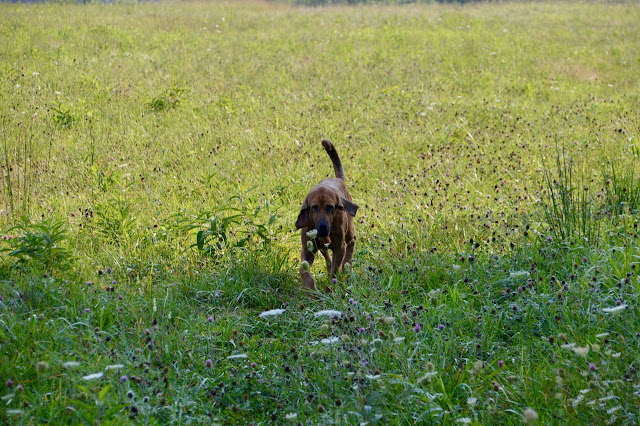 For the first time in 14 days I did not add the buffered aspirin to her kibble. I want to see how she does this next 7 days. I am still deciding which hip and joint supplement to buy for her. 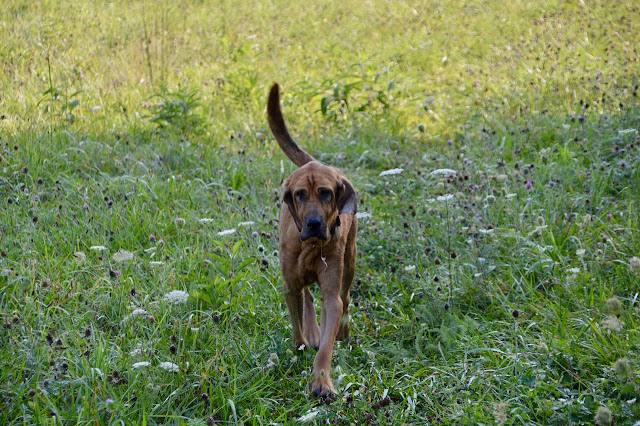 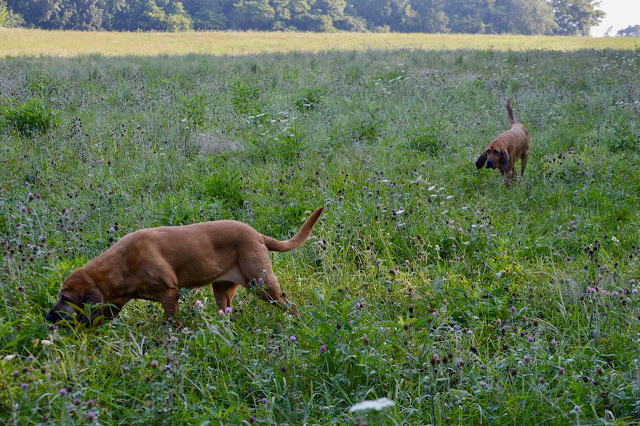 They might take their time but they will gradually meet for the walk into the yard when they finish each walk. 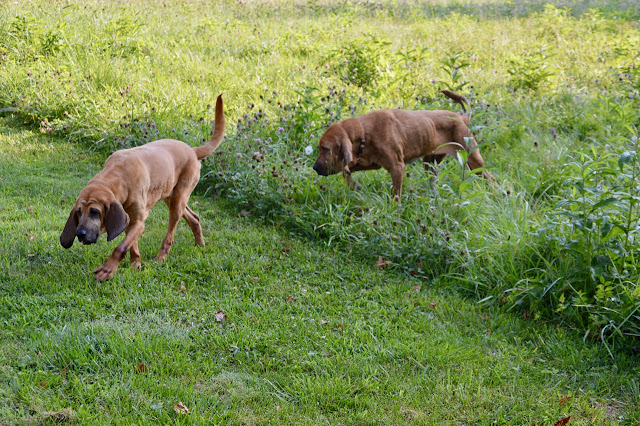 I took a day off from blogging yesterday. The break felt good and it might lead to less blogging or at least not every day. I get a lot done around the house when I'm not on the computer all the time. I also deleted my Facebook account yesterday afternoon. I'll have until the 28th of August to log in to keep all the data on my account.

Since I get all of my sports updates off of Twitter and many of those people have the same links of Facebook, I decided I didn't need both. Plus I find it troubling that Facebook admits that not only can they track your internet activity (what's new) but once you download their app into your smart phone, they can listen in on phone calls.

I've never used their Apps for that reason. I realized that all websites track what I do and I really don't make that many phone calls ... still the thought of their abilities was one of the reasons I decided to delete my account. I had other personal reasons also.

Why did I get a phone call from the Netherlands yesterday? Caller ID is a great invention. No, I didn't answer the call.

While enjoying the AC after 1pm yesterday I played a lot of Mahjong and continued to decrease times. I decided to get the rest of my games under 3 minutes 30 seconds. On average I was completing them in 3 minutes and 10 seconds or less. I still have less than 5 games I can't seem to get down to 3 minutes and 30 seconds.

On the walk the ticks are gone ... mosquitoes are back. My spray with a lot of DEET works fantastic.

I am thinking diet changes again. Not much of a change but back to a plant-based diet with fresh salmon. I'll have to make the 25 mile drive to pick up the salmon and of course coffee/sugar will be one of the few processed foods I eat.

I almost forgot ... due to the increased blog traffic from Russian and the Ukraine on my old blog where I use to do all of my public blogging ... I set that blog to private yesterday. That keeps them from poking around looking for holes and prevents others from downloading photos. I'm not blogging there but just locked it up.

Thanks for stopping by to read the blog, look at the photos ... I'm heading out for a short drive in the Z4 before it gets too hot.