The Hounds Start Another Weekend 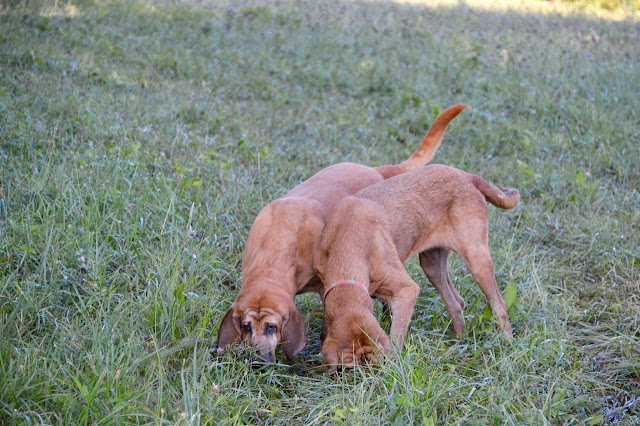 It's like all other weekends, even most week days ... the hounds started another weekend like they do any other day. The deer scent was extremely strong this morning. With a strong breeze from the NW and the temps not even touching 70°, we took off into a wet field looking for deer. It's pretty amazing that weed grows wild, taking over anything in its path and one seed can grow 500 others. At least that is what the article I linked last week told me. Maybe I should plant as many as possible in my small north side yard and see who wins between this and ivy. It's hard to see in this picture, but Stella made a left turn as soon as her paws felt that wet grass. She had free rein today and I was almost positive she was heading to those small woods straight ahead behind my neighbor's house. She surprised me. 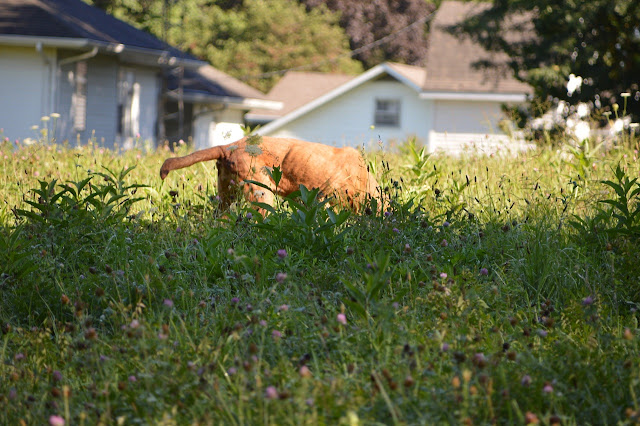 It wasn't fast but she made her gradual exploration for deer scat back towards our path. 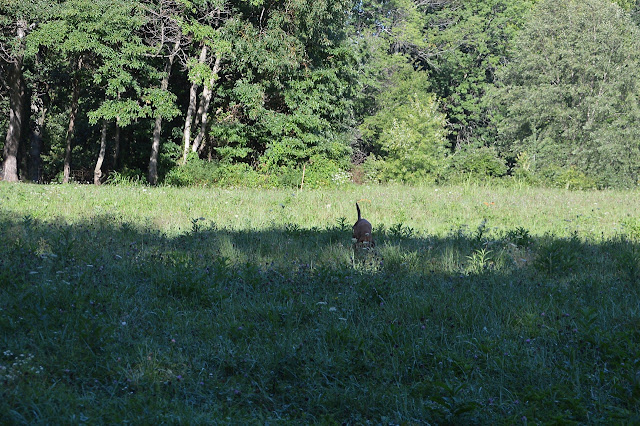 Another thing this shows is just how close to the house the deer get while all of us are in a deep sleep in the predawn hours. 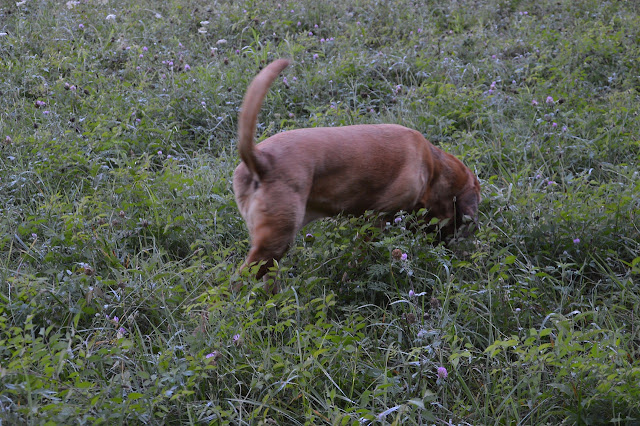 Sadie's search was so intense that you could hear her jowls move with each inhale. I had a dog sitter tell me years ago after taking my bloodhound Bertha out for a walk in this same field, she had never heard a dog make that kind of noise while walking. 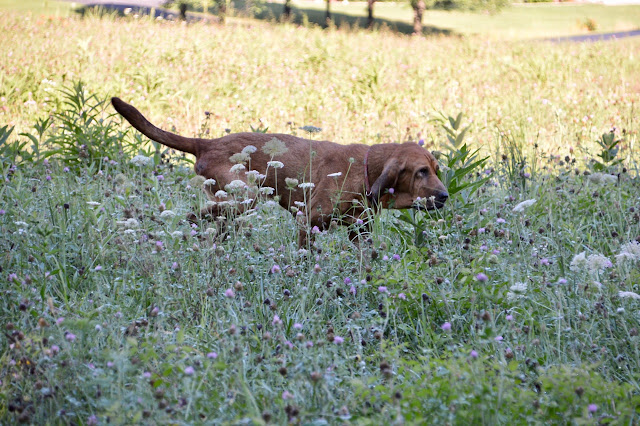 I was happy to see Stella slowly change her direction towards us as Sadie and I walked on. The wet field was taller than my boots, so my bare legs were getting wet with each step. That breeze from the NW felt good this morning, a sweatshirt was not needed, the t-shirt I wore was just find. 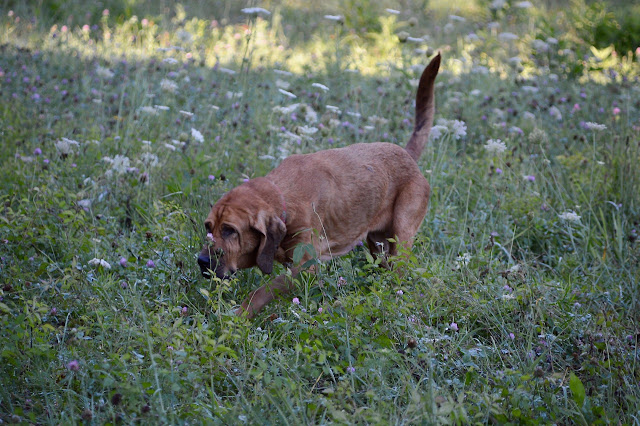 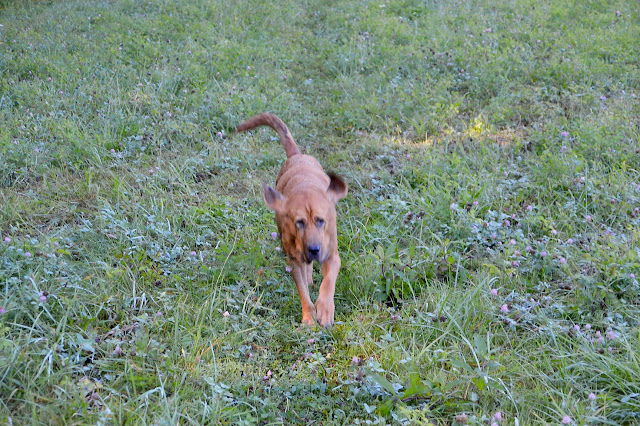 Once Stella walked on the path she started running toward me, not trotting. She has done that every day this week so improvement with her hips continues. 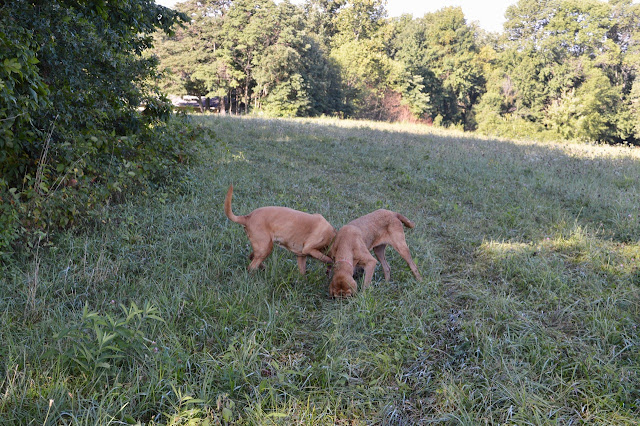 It might look like the 'normal' stopping point in the walk for Stella but today was different. The scat or scent was so strong that at one time Sadie's head and shoulders moved under Stella's stomach and almost lifted her off the ground as Sadie stood up under Stella. My camera was not fast enough to catch that comical act. 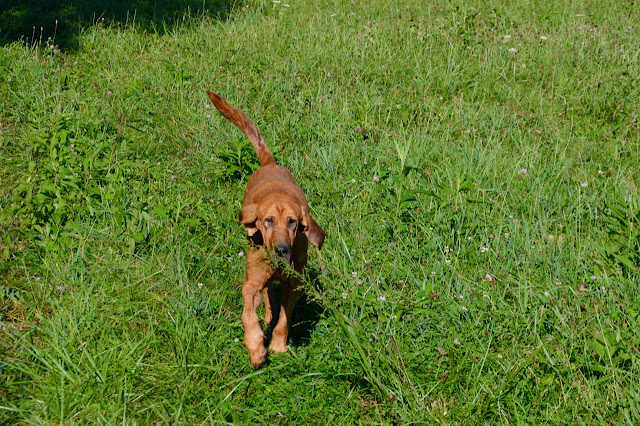 As Stella ran up behind me and the past me, joining Sadie ... I knew this morning I would be joining them in the far corner of the field. That is the main lounging area for the deer and based on what I had seen so far on the walk I knew the hounds would have to check that area out. 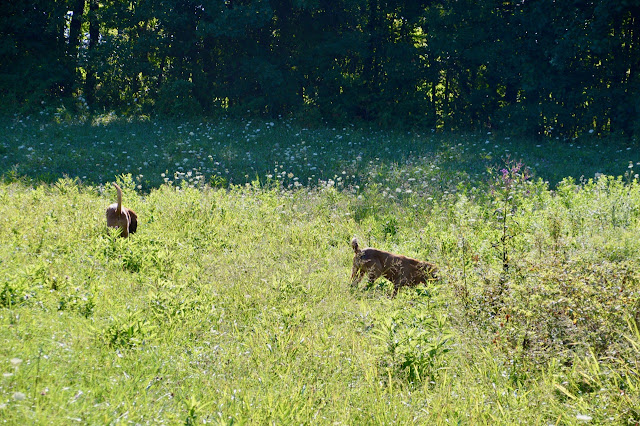 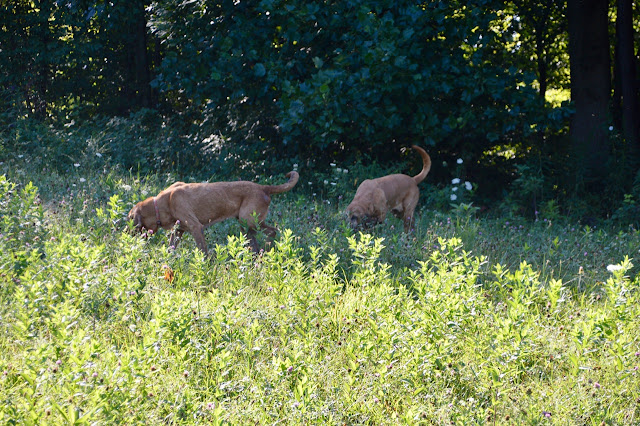 When they did not stop to eat but continuously followed the scent, they acted as if the deer were within minutes of them. I knew the deer were long gone and were missed by hours. 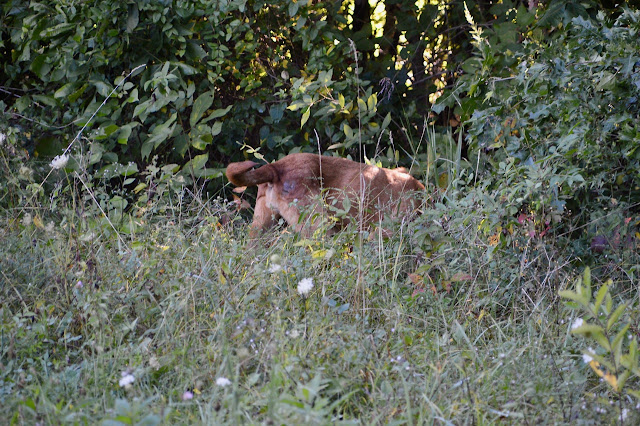 Stella had found a deer bed, with the brushed mashed down. 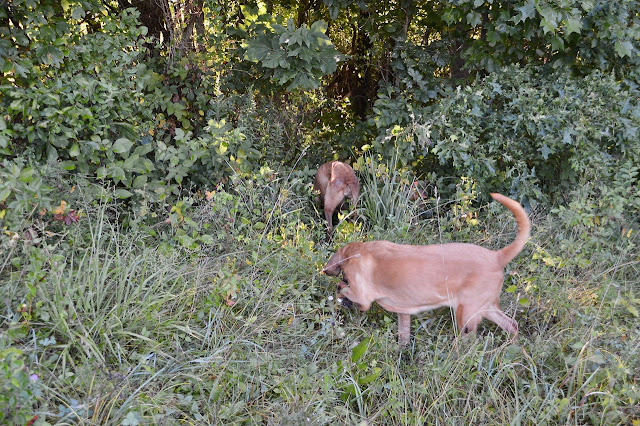 Sadie was not in the lead this morning ... Stella was taking charge of 'the hunt'. 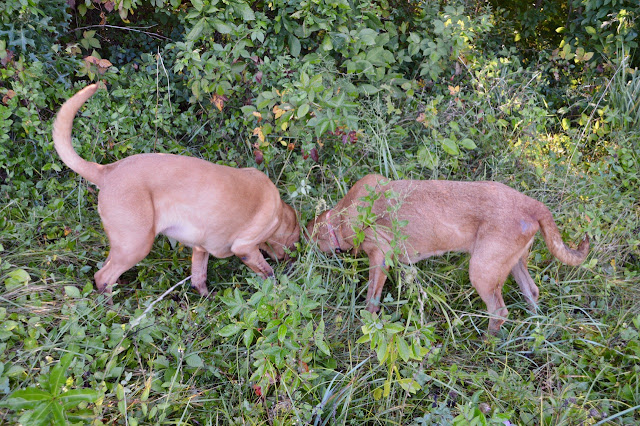 That deer scat is buried deep in that brush, level with the ground. 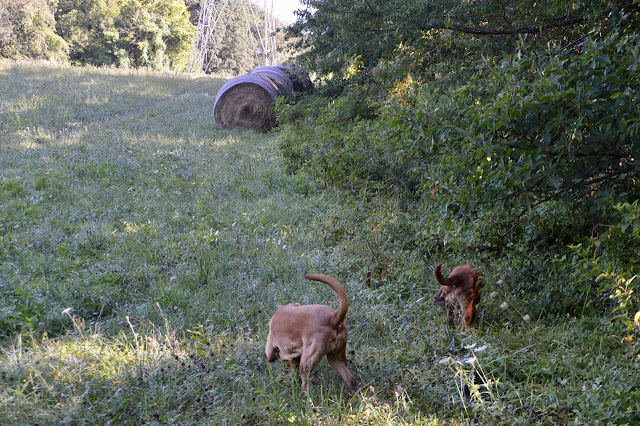 They followed the edge of the field just like the deer would be doing as they walked or trotted to the woods to the north or the soybean field to the right, just past the rolls of hay. 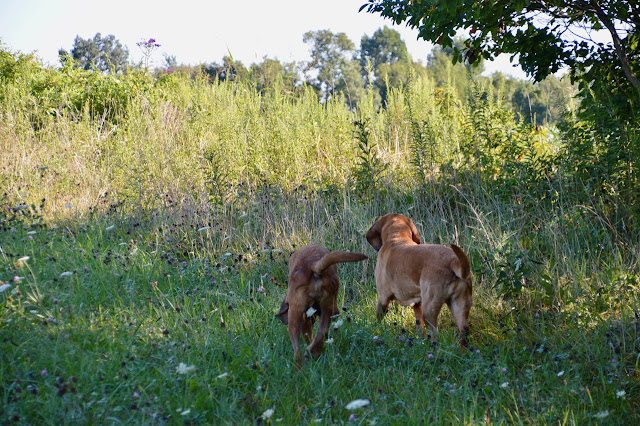 Sadie was positive the deer had jumped the short fence hidden by overgrowth. 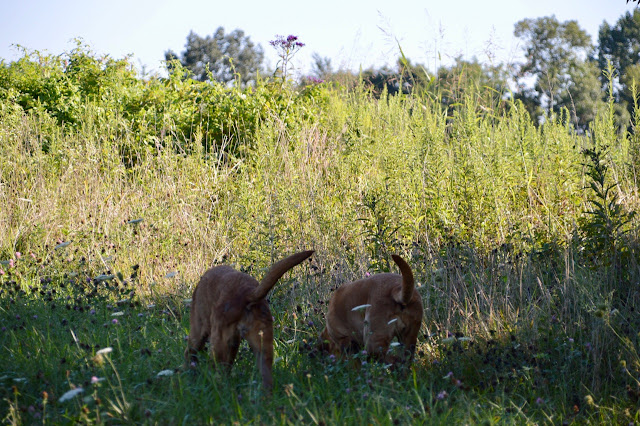 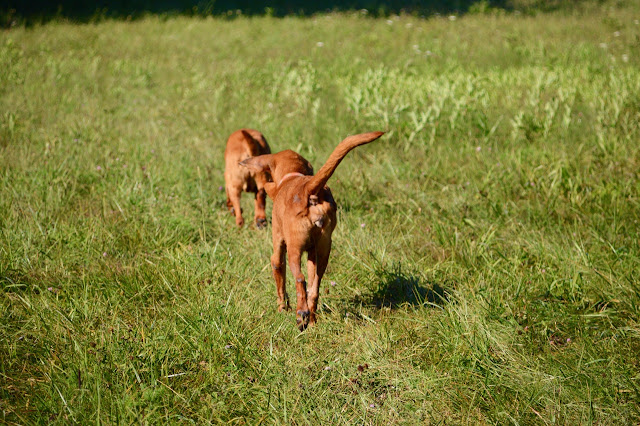 As I made the final turn toward home on the path, I told both of them to "come on" and they sprinted past me and didn't stop. I could only catch them in these next two pictures with a 200mm zoom. 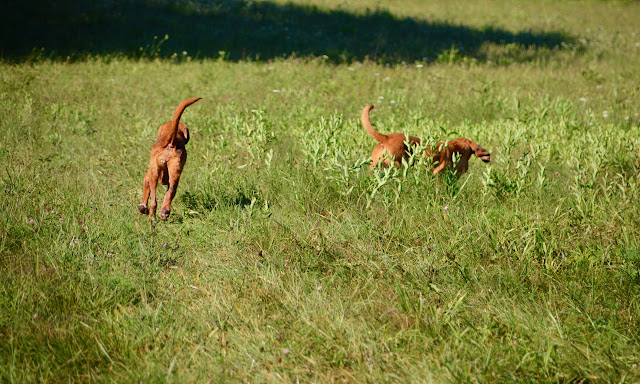 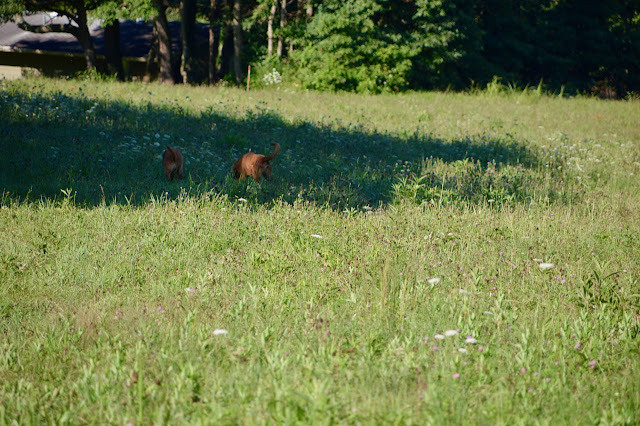 The whole time walking I never felt a mosquito after a night of rain. I also didn't see one butterfly the whole walk, unlike yesterday's late morning walk around 11am. We were back to normal time this morning as you can tell by the amount of shade covering the field. 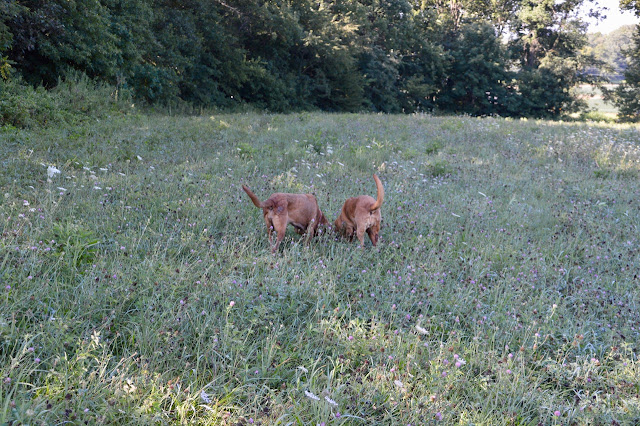 Stella headed to the north part of the yard ... with many stops in between. 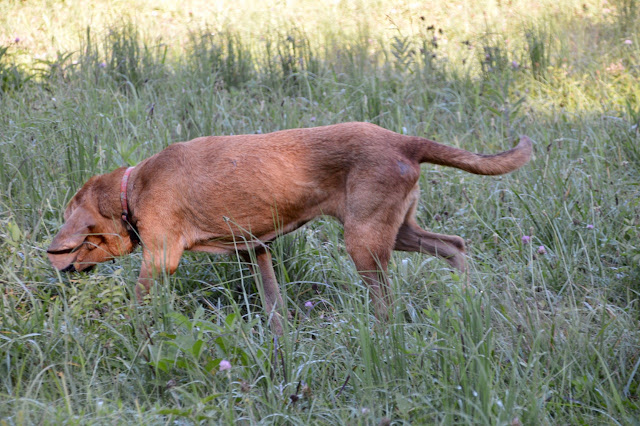 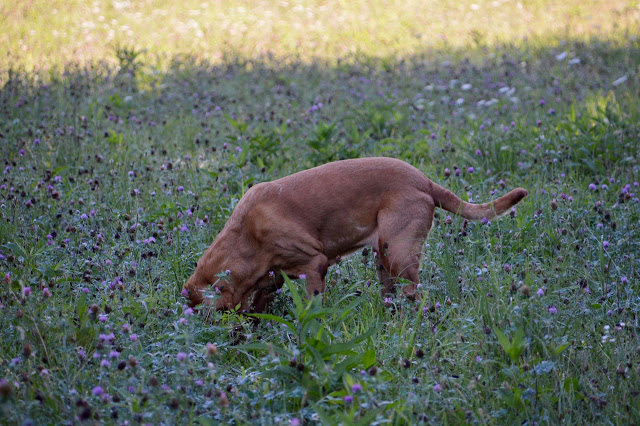 Sadie never let up in her efforts of finding 'stuff' to eat. 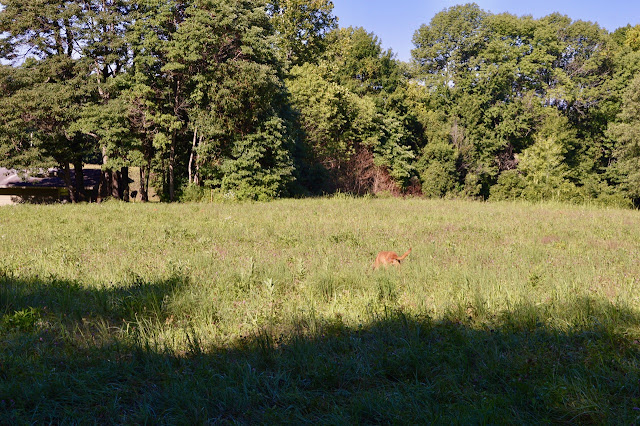 You can barely see that old rusted pole marking the edge of my property and the neighbor's surveyed field. Our survey's don't match but I'll take the extra 100' of  land that his survey gave me. Who knows what the real property lines are around here. 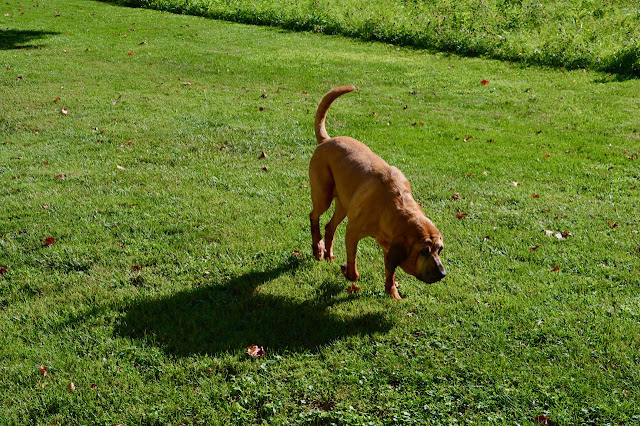 Sadie finally ran to get home. Stella and I were already back at the house. As she slowed down trotting across the cut lawn ... you might be wondering why did she run from the middle of the field without being called???

She doesn't want Heidi or Stella touching or drinking water out of 'her' bowl. The Bloodhound Property Laws are on a page at the top of the blog.

With the hounds sleeping, the temps cool and the sunshine back out, it was the perfect time to take the Z4 out for a Saturday morning drive. Traffic is light, so it will be a very nice drive through the hills and curves on the two lane state highways.

The rain was light and didn't amount to much. I'ts sunny again here in 'the tropics' of Southern Indiana.
at August 12, 2017