Not A Lot Of Hound Activity 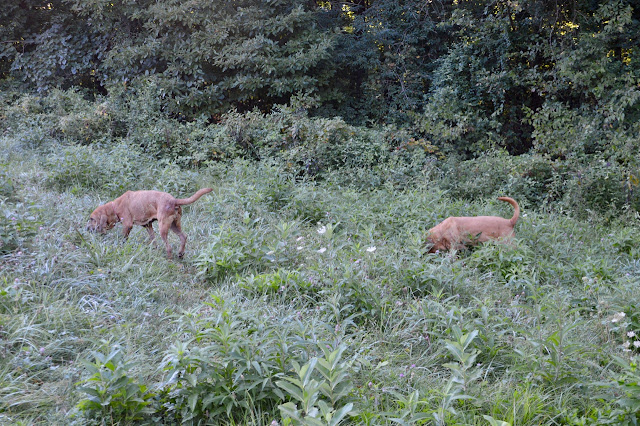 I am not sure if it was the "muggy" feeling outside or the August average temperature that zapped the hounds this week ... they had less energy than I did. Heidi has all but disappeared for social life and being photographed. The bloodhounds and I have still been able to squeeze in a couple of walks per day. With college football only two weeks away, things are looking up here in 'the tropics'. 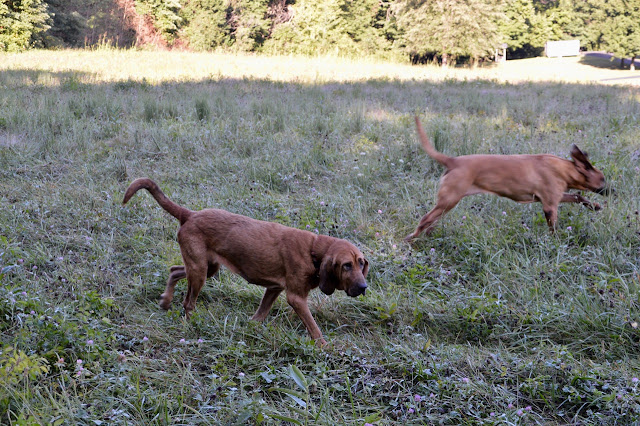 You can tell the distinct difference in personalities between Sadie and Stella with this picture. While Stella slowly strolls the majority of time during the walk, Sadie cannot get to all the new scent fast enough. 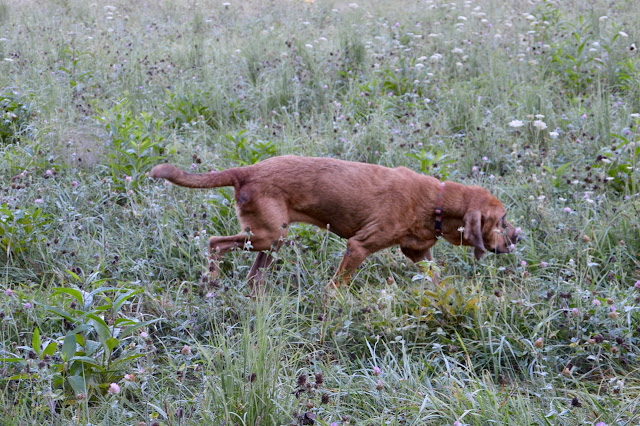 Today was going to be a day where both hounds had total freedom. Since it has been months since Stella has visited the drainage ditch next door, closer to the highway, I felt pretty good letting her go on her own. She didn't disappoint me ... 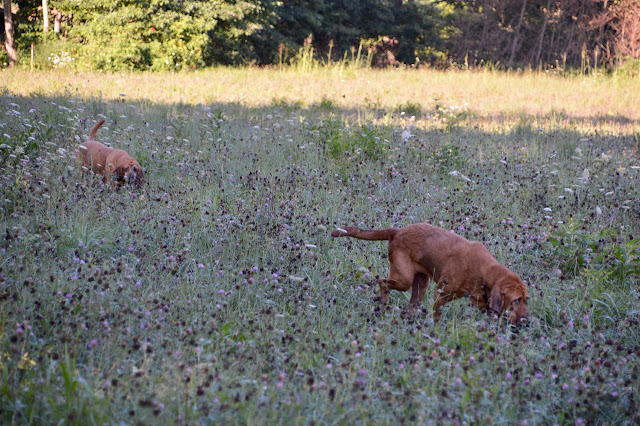 Yesterday I was curious enough to check back on our older blog for posts a year ago, to see what had changed in our activity if anything. Basically it was the same for this time of year (the dogs days of summer) with the field being a little taller last year at this time. My 'to do' list is still in a holding pattern with lack of motivation being the reason. 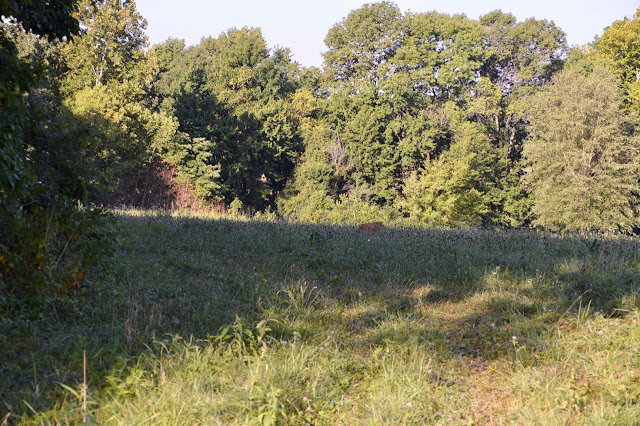 I took Stella's picture before Sadie and I continued the morning walk. She is not quite at the first turn of  our walk. Most of our afternoon walks are without a camera and Stella attached to the 25' retractable leash. It's too hot for me in the afternoons to stand around watching her eat deer scat because she is stubborn in the afternoons and will not leave. 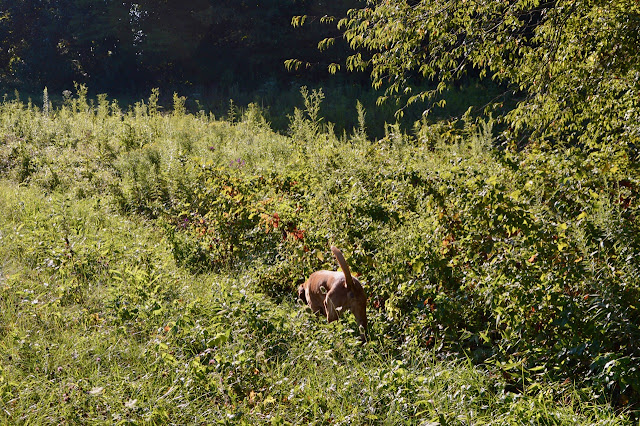 Whether it be 2 or 3 walks for the day ... Sadie never changes. She loves the walks and loves investigating scent even more. 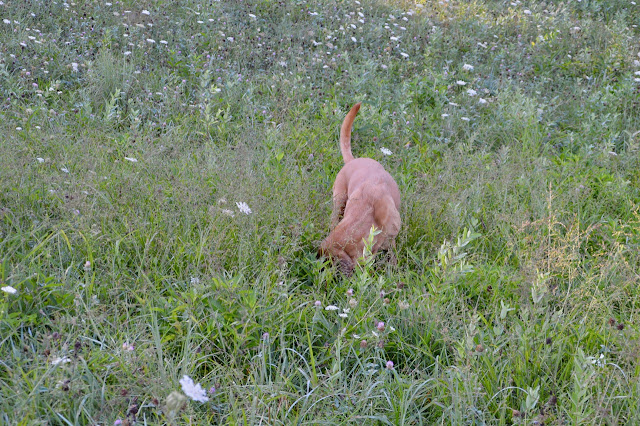 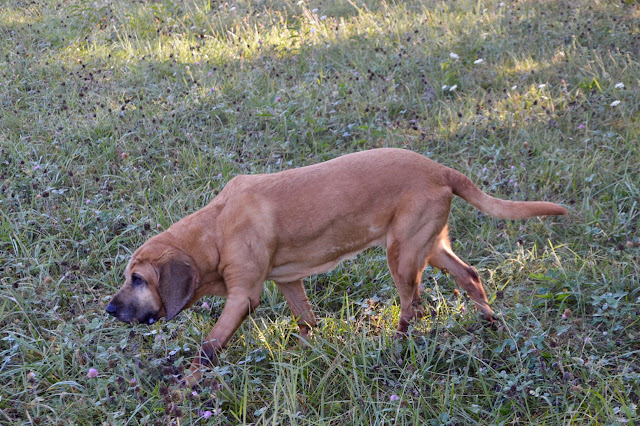 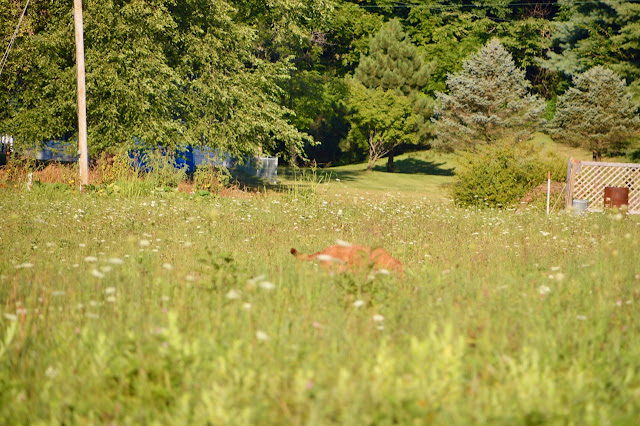 As I crested the small hill on our way back, I didn't see Stella anywhere on the horizon. My 200mm zoom lens scanned from the left to right. I knew once that I walked further I'd be able to see her in the lower elevation ... although the field looks flat from a distant view. 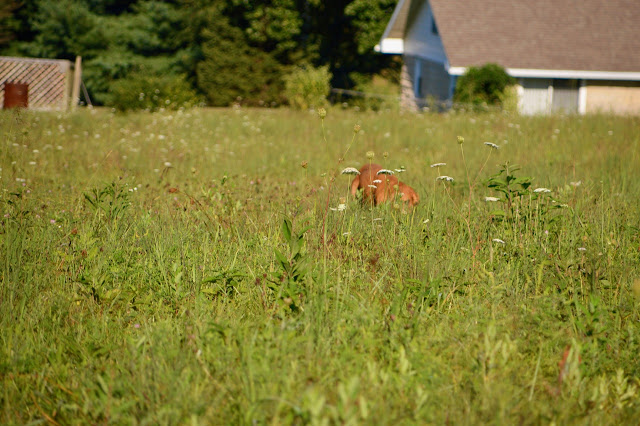 When I called her, she made the gradual turn toward me and slowly walked hidden through the taller weeds. 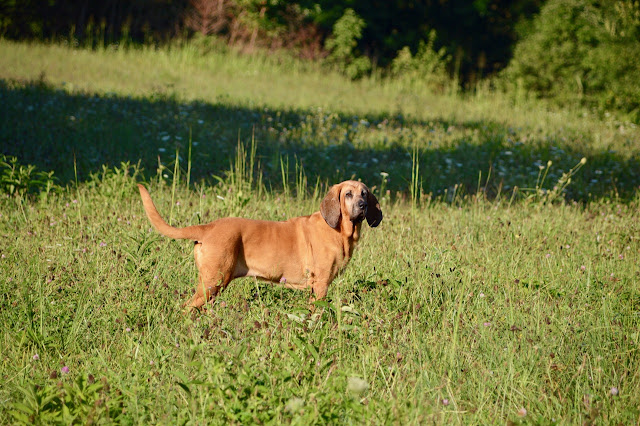 Sadie had run up the path looking for Stella in the normal places, like the spot we left her and then glanced over toward the neighbor's woods but she couldn't find Stella either by eye sight or her nose. 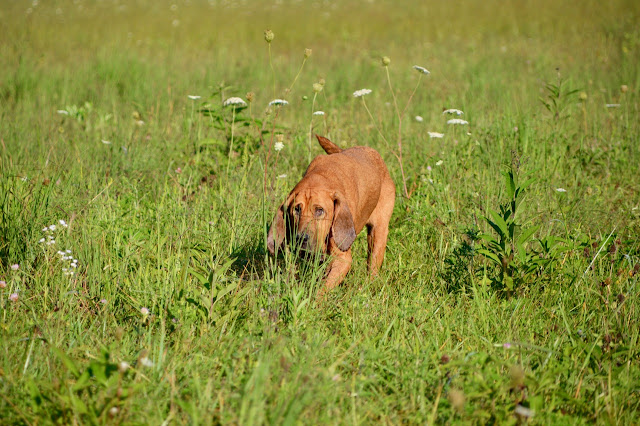 She creeps at times when she walks ... thinking she is hidden and I cannot see her. 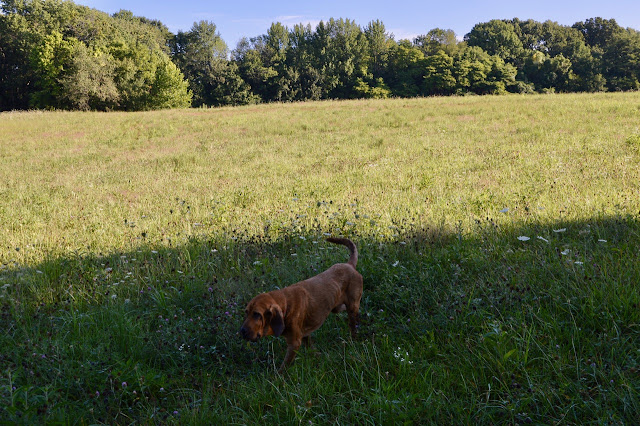 I think you can tell by the pictures, it's going to be another beautiful day here. I've been spoiled this summer. Temps haven't been that bad, most of the rain forecasted missed us by going north or south of us. I have hard time imagining what bad weather is anymore. 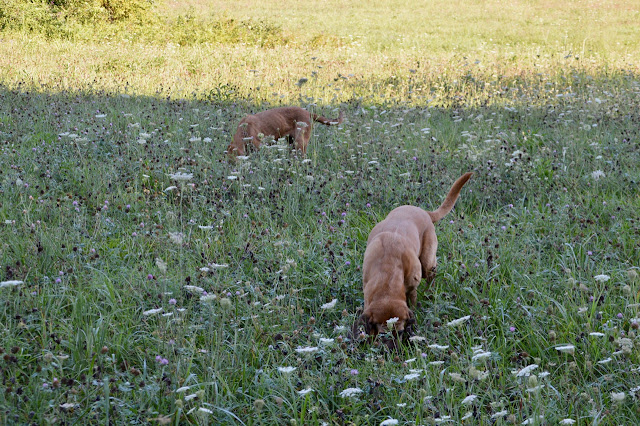 If I didn't call the names of these two I don't think they would come back to the house for hours. I would not mind doing that but with the highway nearby and a nose strong enough to lead them astray ... that's not a good combination. I am lucky enough just to let them walk not leashed. Some bloodhound owners have told me they would never let their hounds off leash, even in a field such as this.

Sorry to say that Heidi has not been in any recent blog posts. She is not sick, feels great and will have a daily burst of energy inside where she barks at herself while rolling over on the carpet. Then it's back to the couch or the dog bed in the other room for more sleep.

She has figured out if she stretches out in the middle of the couch there is barely enough room on the ends for Stella or I to sit down. Eventually she will curl up giving us room later that night as I watch either baseball or football on tv.

I think Stella and I are going to take a short drive over to the vet this morning and get weighed. I am anxious to see how much weight she has gained since April when she had dropped to 65 pounds and was nothing but skin and bones.

How many readers have their NASA approved glasses to witness the eclipse on Monday?

The hounds will be staying inside the house during that short period of time. I am north of its path but still expect some darkness and cooler temps for a short period of time Monday afternoon. I am still curious of the State Patrol is correct in their traffic prediction on the highway that goes in front of the house.

Not much activity to write about lately here in 'the tropics' of Southern Indiana.
at August 18, 2017