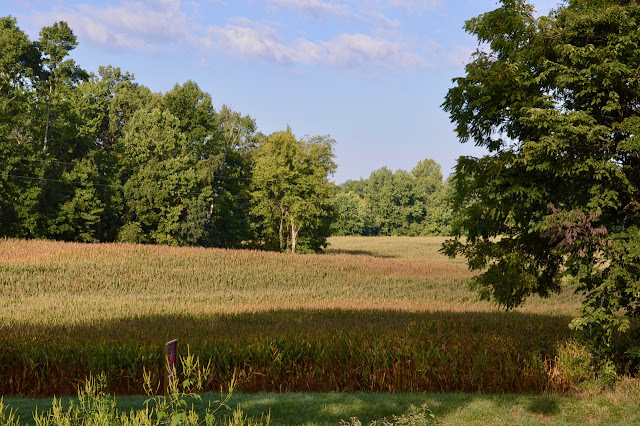 The weather forecasts were correct, it was 60° this morning as we started our morning walk. As I write this a little before 10am, it's 64° and hard to believe for August weather in this location. It will take all day to get up to 79° but that is still cool enough for the hounds to get 3 walks in today ... hopefully Heidi was join us. 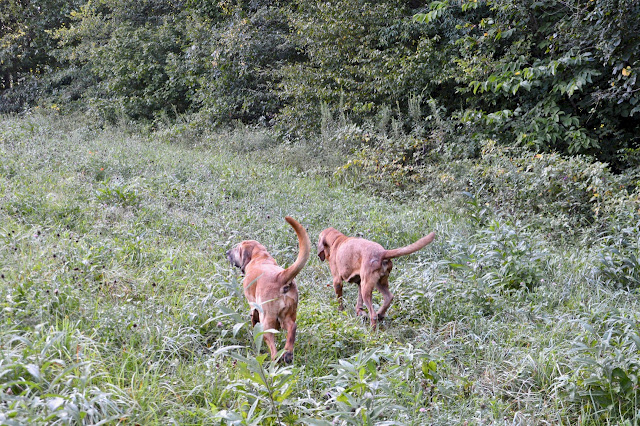 Same routine, same path most of the time ... only this morning Stella and Sadie strolled together for most of the walk. 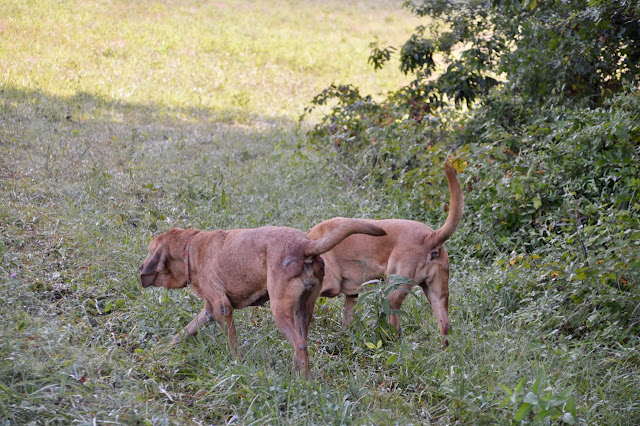 I am finding there isn't really much to say about this morning's walk. I could have started a couple of hours earlier and then lead into my 'to do' list but I still have a lot of time to get a lot of things done today. This cooler weather has motivated me today. 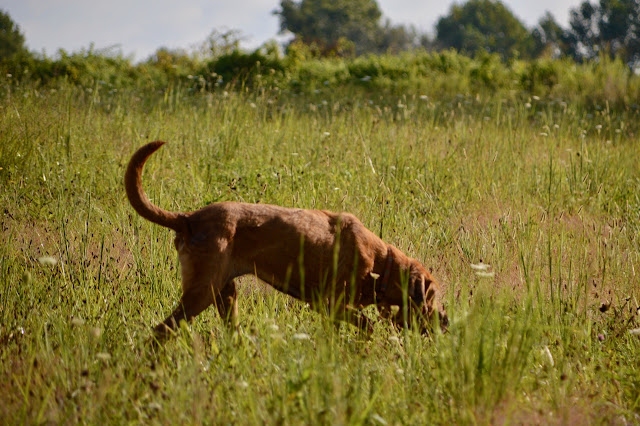 It's good to see that Stella's tail is in the upright position ... it's a good sign she is feeling good again. 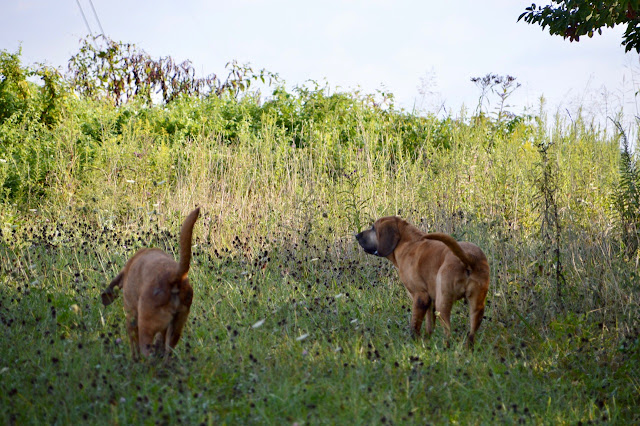 I didn't know it at the time I took this picture, but Sadie had picked up deer scent. She did not take off, nor did Stella to chase them. She was looking in the right direction. 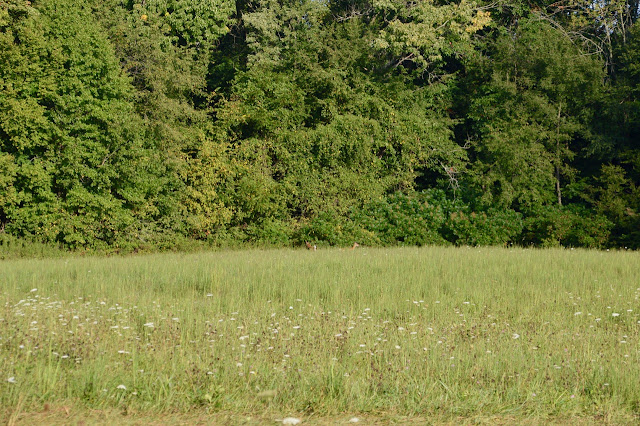 As I made the final turn, I looked over to my right along the wooded area and 4-6 deer were scattering and sprinting from the field to the woods. I only caught these two. Many more were further to their left. 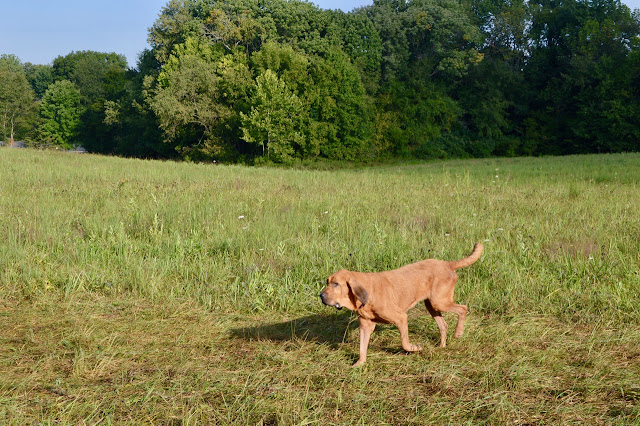 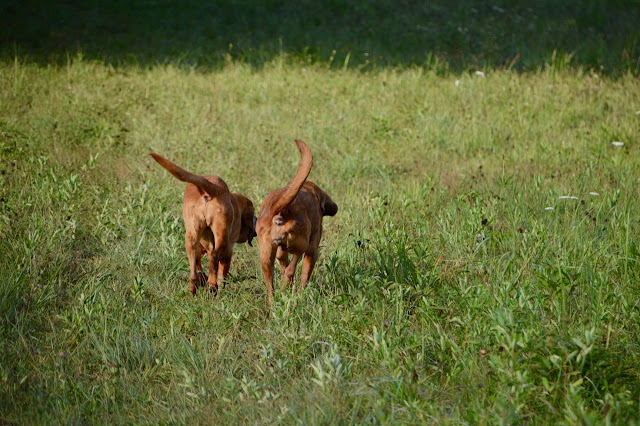 Deer in the area that they did not see did not seem to be a big deal to them. They had other stuff they wanted to check out before I caught up to them. They took off running way ahead of me. 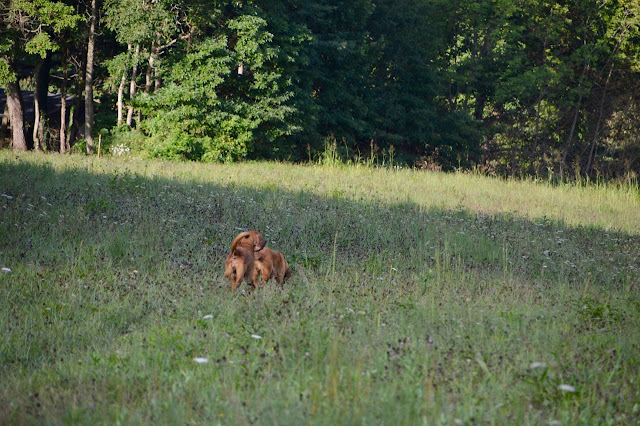 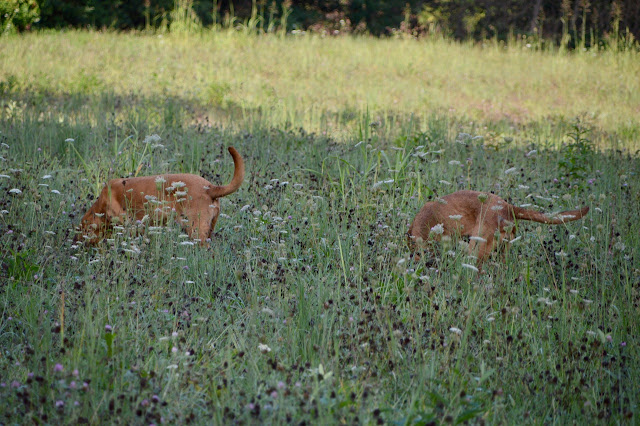 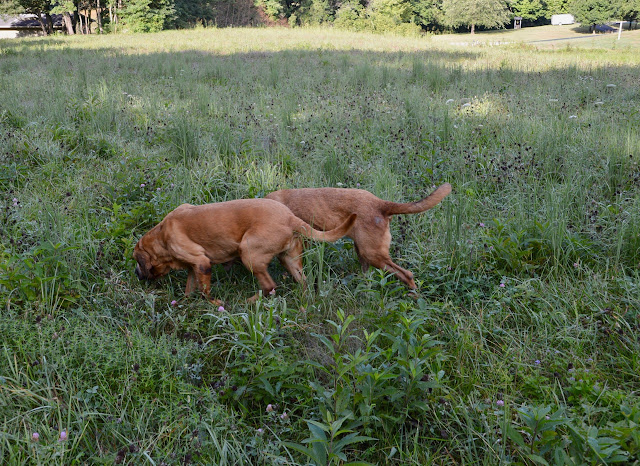 It took some coaxing but I was able to get both of them moving in my direction home. 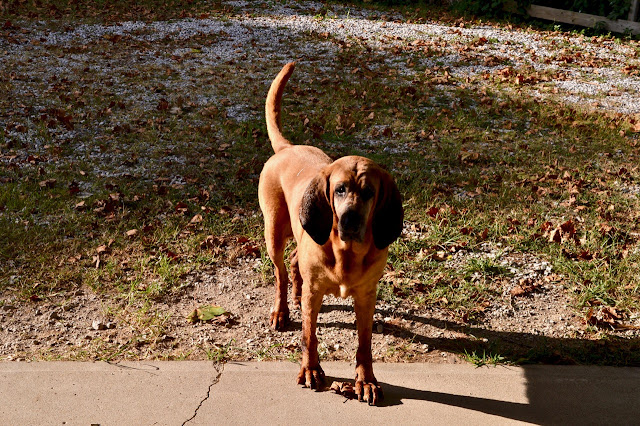 Sadie acted as if we should keep walking somewhere, as she was not ready to come inside. It was a great walk with no humidity, no mosquitoes, and was cool t-shirt weather. It should be a great day to get a lot of low priority stuff done today. The AC is turned off and all the windows are open, with a good chance of that happening for the next 10 days.

I was so happy with the performance of the 'beta' version of Apple's new macOS High Sierra on my laptop computer, that yesterday afternoon I installed it on my iMac. Here is a preview of the improvements, macOS.

A few of the things I have noticed is a faster Safari browser, really faster. I've made it my default browser again and put Google Chrome back on the shelf in the Apps Folder, out of sight. The editing features in the Photo program are much more detailed, some professional settings that I will probably never use.

Of course with any OS change I've had to make some adjustments. I mentioned the other day my 2011 version of Microsoft Office for Mac would not work on the new OS after October. Microsoft was no longer going to support that with updates. They are wanting everyone to buy their 2016 version. For the 'basic' stuff I do in Excel I didn't need a new Office package.

I finally found out how to link cells between spreadsheets. I didn't find it in my 100's of internet searches or reading the forum full of Mac geeks. I even posted my question on that forum and didn't get an answer on how to link cells from different spreadsheets. I did not find my answer in Apple Support ... I found it on my spreadsheet after it was converted to Apple Numbers. By highlighting the cell I wanted to link to, it showed me the formula.

So all is good migrating from Microsoft Office to Apple iWork programs and they are free.

On a closing note, all of the plants I planted a few weeks ago are too far under the roof overhang to get rained on. After our night of rain on Monday night, I could tell the next morning what plants got watered by the rain and which ones did not ... none of them were touched by the rain. The Yews were like that but I never had to water them after they matured.

It's fantastic weather today in 'the tropics' of Southern Indiana.
at August 23, 2017