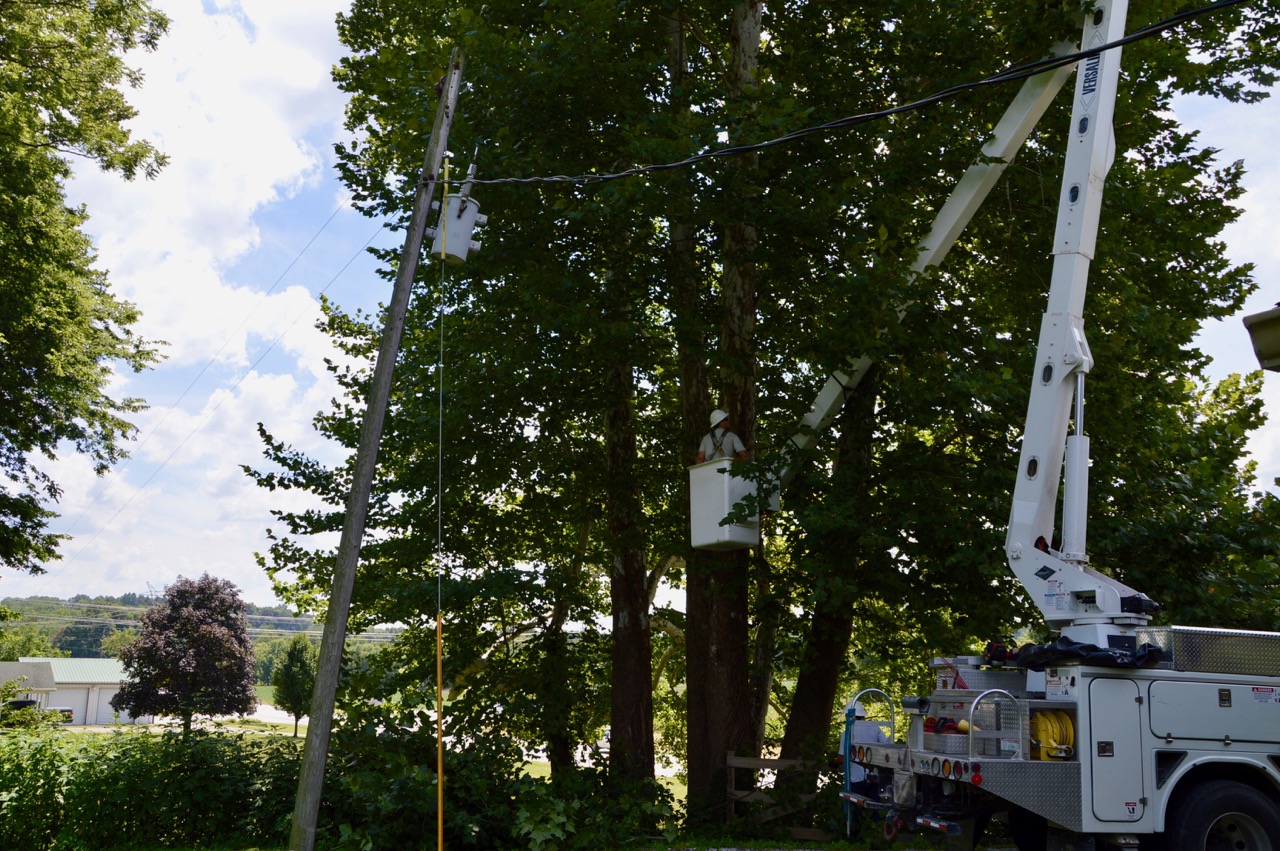 The tree crew from the local utility company showed up mid afternoon on Monday. Sadie and Stella let me know that something big was backing up the driveway with that loud piercing beeping sound that probably drove the hounds insane. I was very surprised that they cut more than I thought they would and was happy with their job.

When they started I had one small branch touching the transformer and a few others very close to the power lines. I wasn't sure how much they would cut back but I gave them an offer to cut the whole tree down if they wished. I've been quoted $1,300 to take it down. 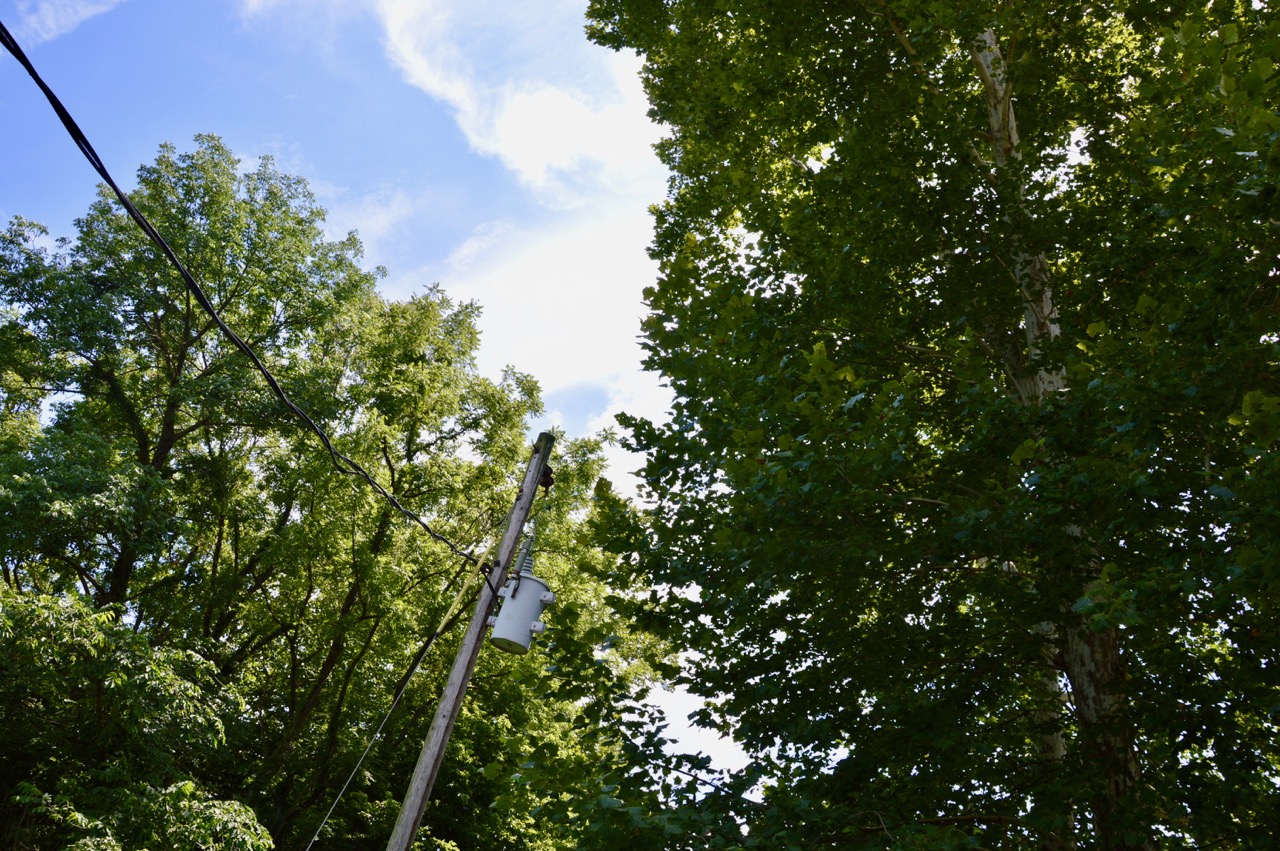 The young kid that was in the bucket and going to do all the work looked familiar when I asked if he mind that I take pictures during the operation. He didn't mind and said take all I wanted. I still couldn't remember where I had seen him before or had I worked with him somewhere? I found out after he was finished, he also drives the tractor that cuts and bales the field behind my house. 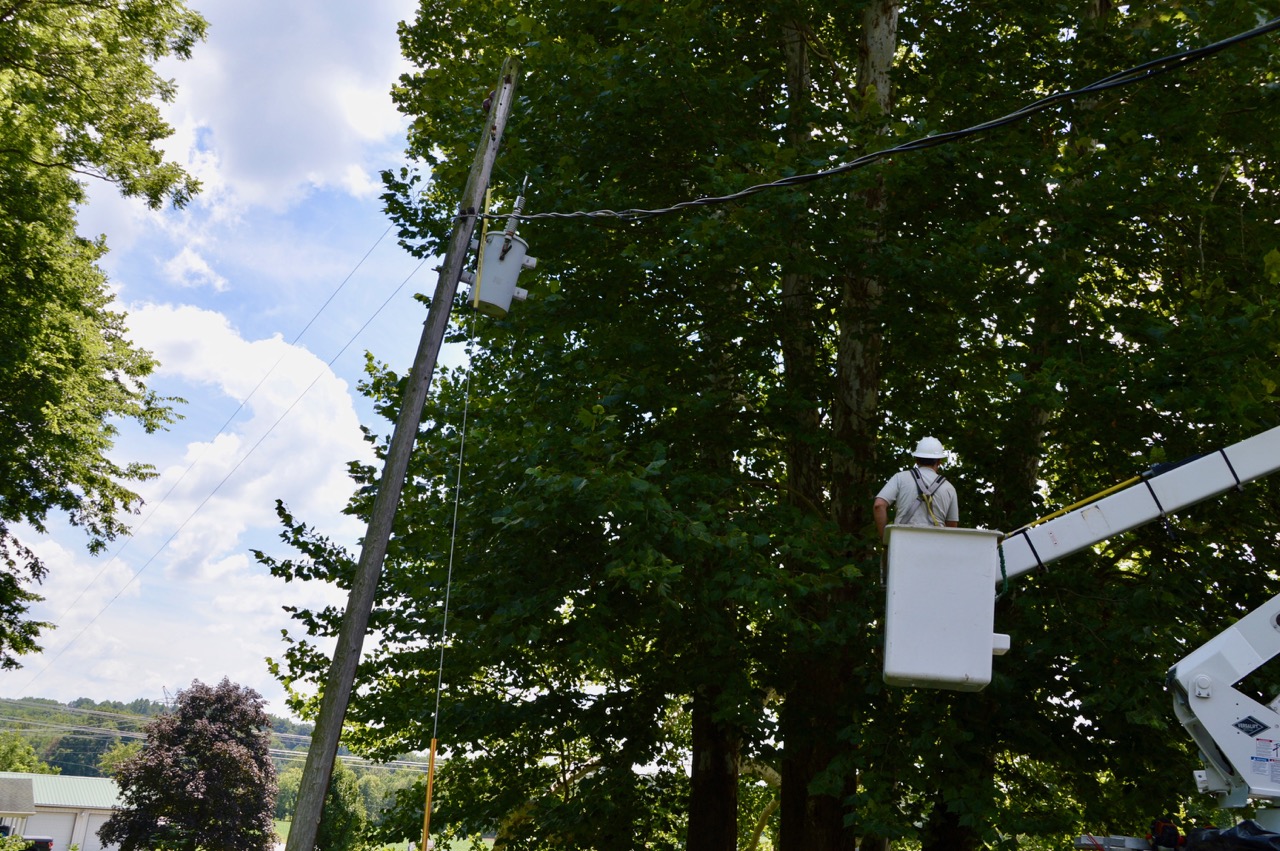 I was happy to see they were cutting the limbs from the tree trunk and not just cutting the ends of the limbs. I now have only a few limbs hanging over my driveway. Basically any limbs pointing toward my house they didn't touch ... if they pointed to their power lines, they were cut down. 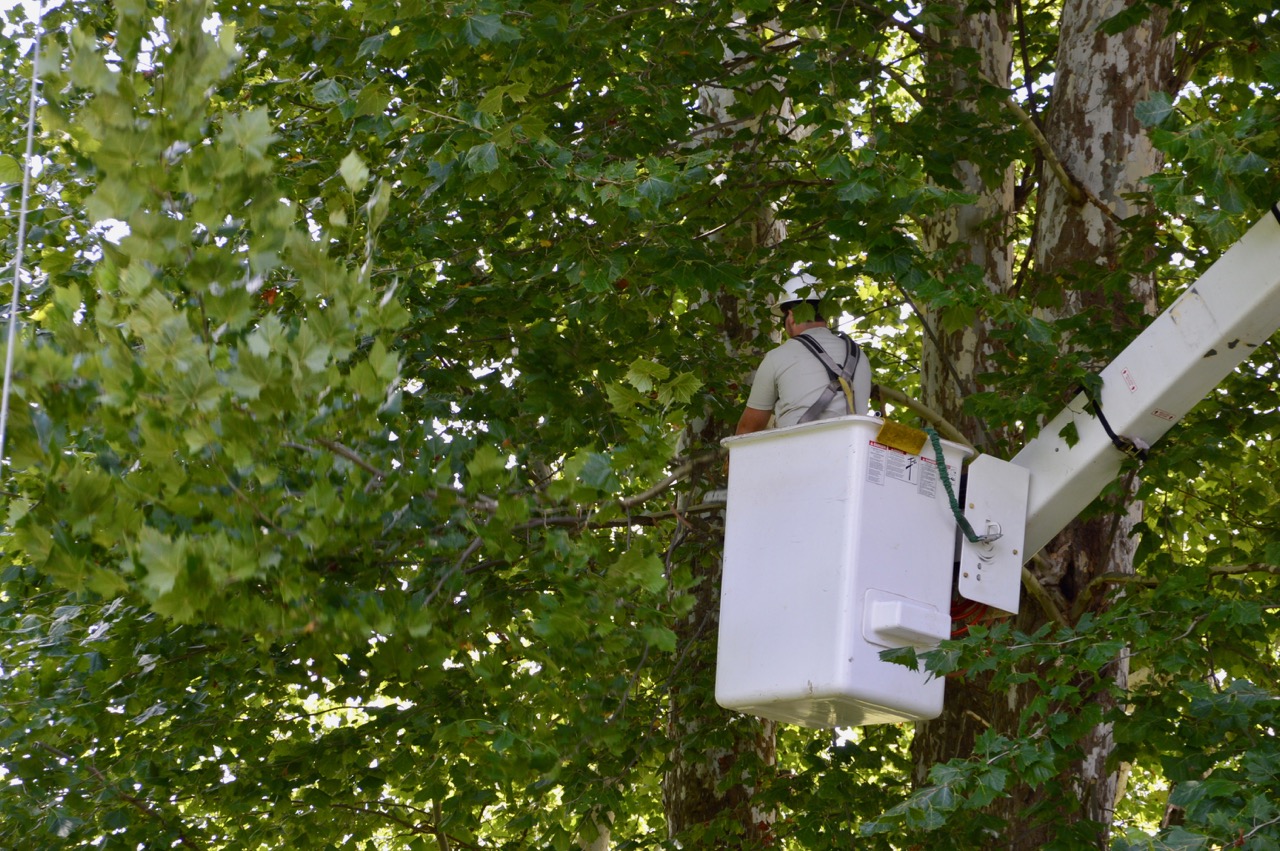 I might have that wrong but from these 5 cut limbs while leaving 1 seems to back up my theory of them cutting only those that pointed toward their power lines. 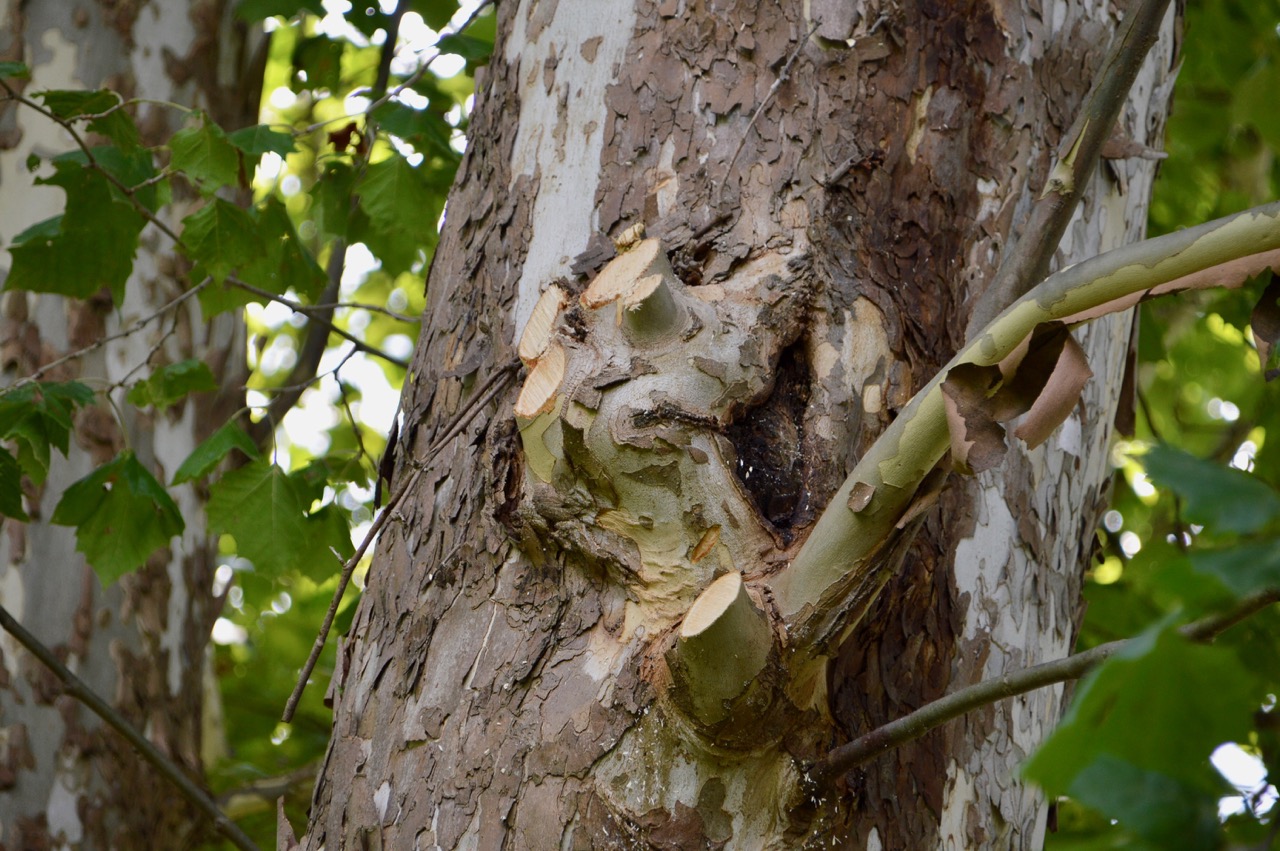 It looks a little strange with that big open spot  but they are Sycamore trees, the most worthless tree on the planet. Although they do a good job of shading a lot of the driveway. 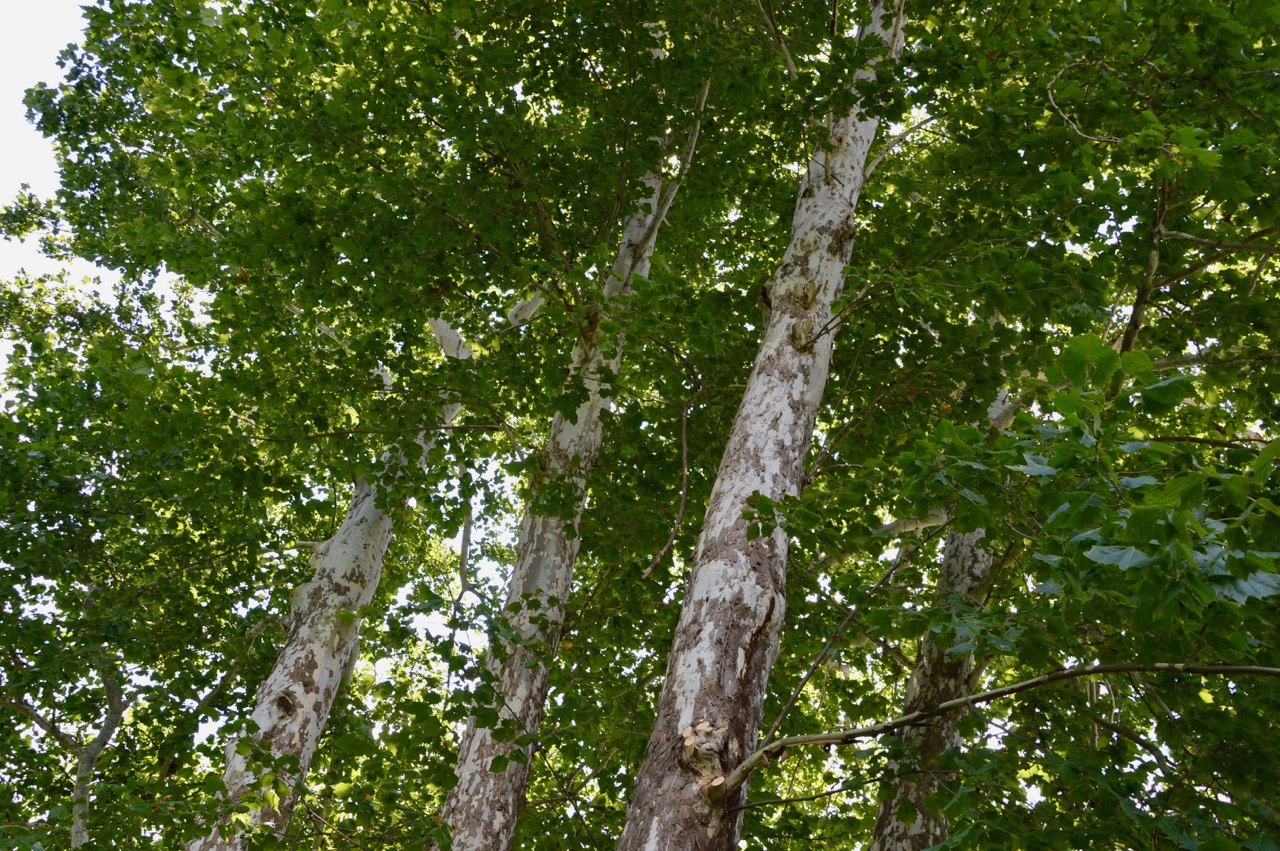 Nothing is near the transformer or power lines and we are good to go for another ten years I guess.n That poor transformer has been struck by lightning a few times, had tree limbs blown into it during storms and exploded once a few years ago when a huge power surge took place. 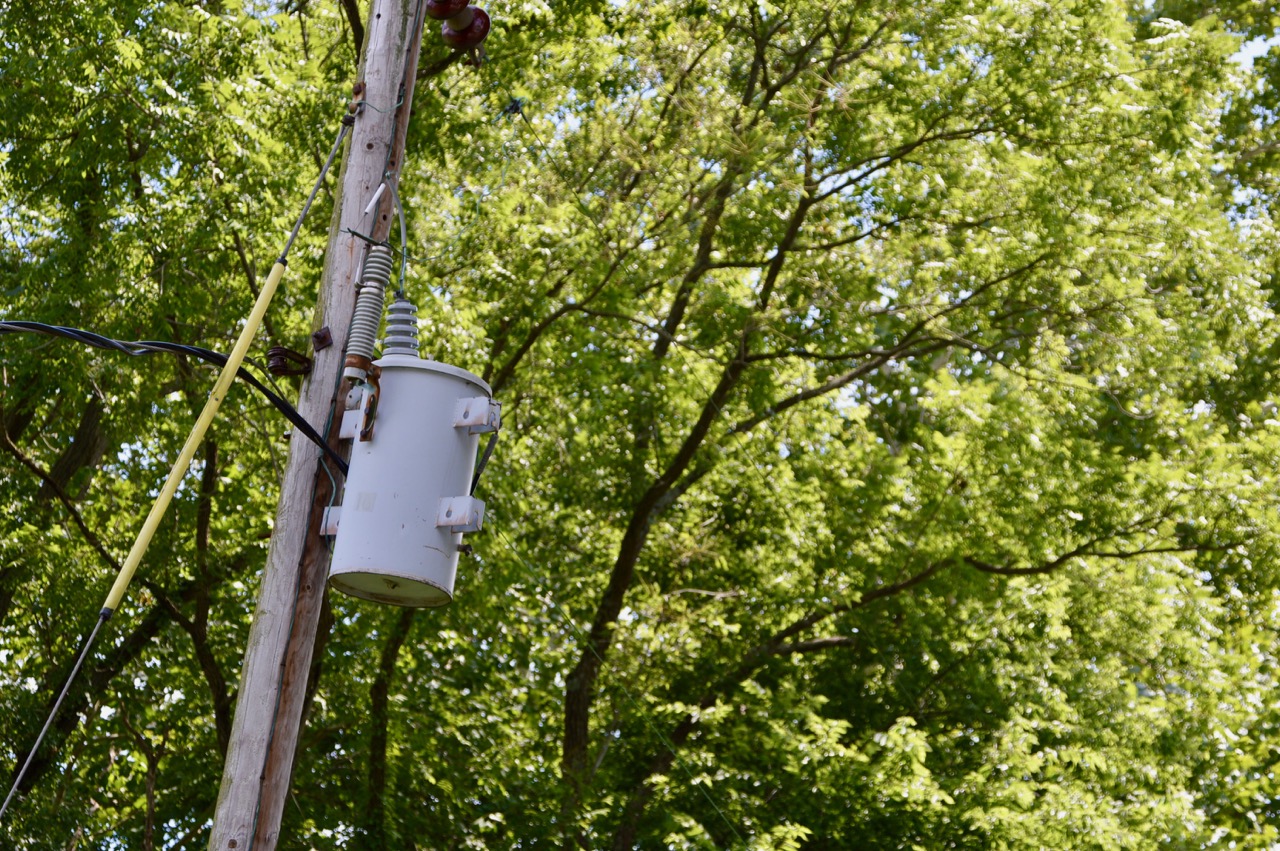 What I did not know was that they would be leaving any limbs they cut with me to figure out what to do with them. I thought it was strange that a chipper truck pulled in behind the large truck with the lift/bucket but I didn't see either truck pulling the chipper. Nor did they say anything. 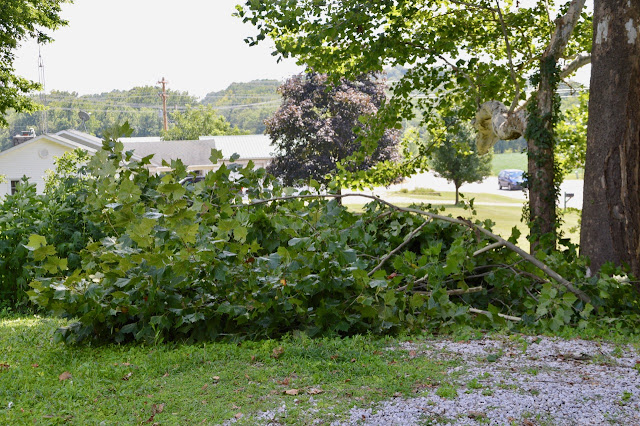 After they left I called the office and she said "I must have forgot to tell you it was your responsibility to get rid of the limbs, the other day when we set up your appointment".

It's not a big deal to me. That is just more fuel to my fire next fall or spring. These limbs are so green that I may not burn again until next spring in 2018. I'll use my lopper to cut a lot of them up into smaller lengths. Anything I cannot cut I'll pull them back into the woods. 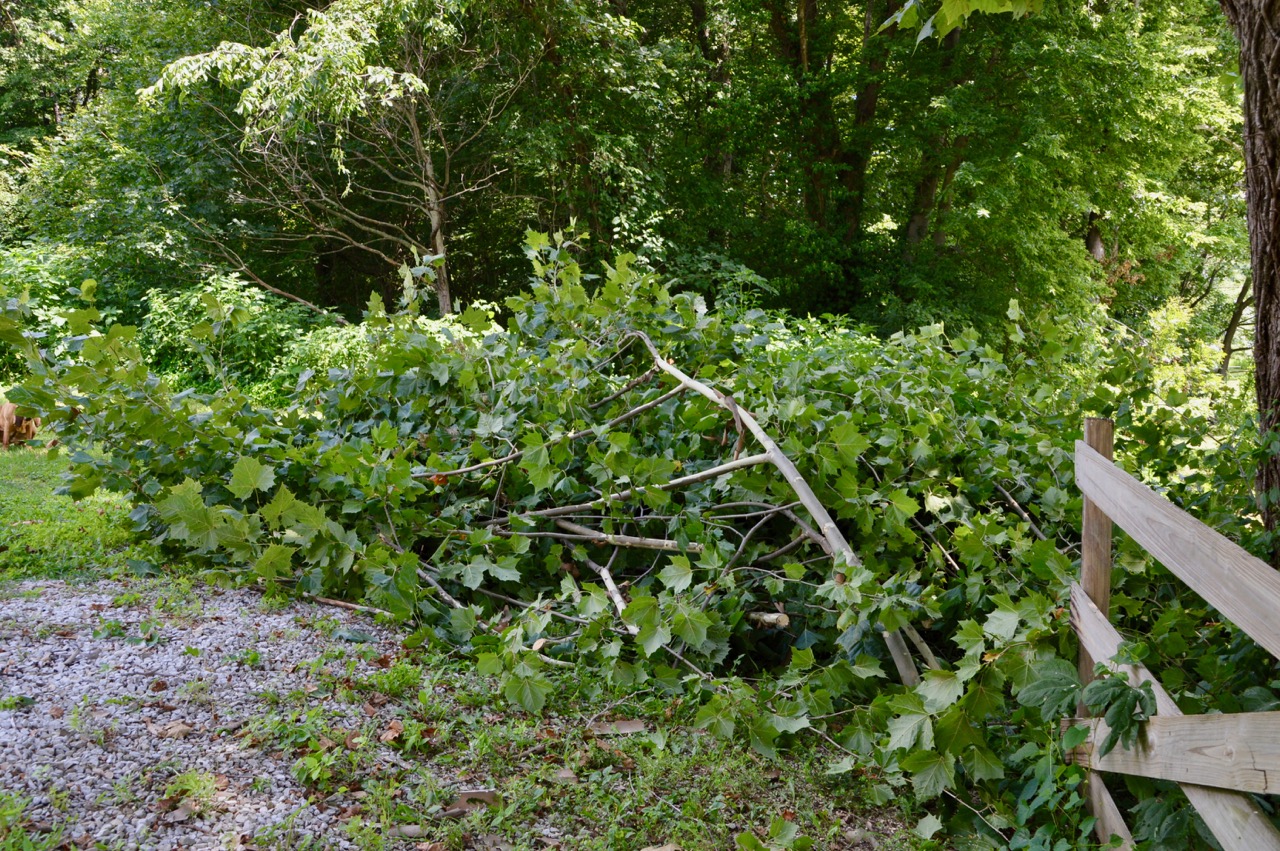 Of course the curiosity of Stella was too much for her while she stood inside at the door watching. During the process she opened the door with her nose joining me and the supervisor in our conversation. Sadie never comes out of an unlocked door but she could not let Stella get all the attention, so today she lowered her head and pushed the door open to come outside. They were both very popular with the tree crew. 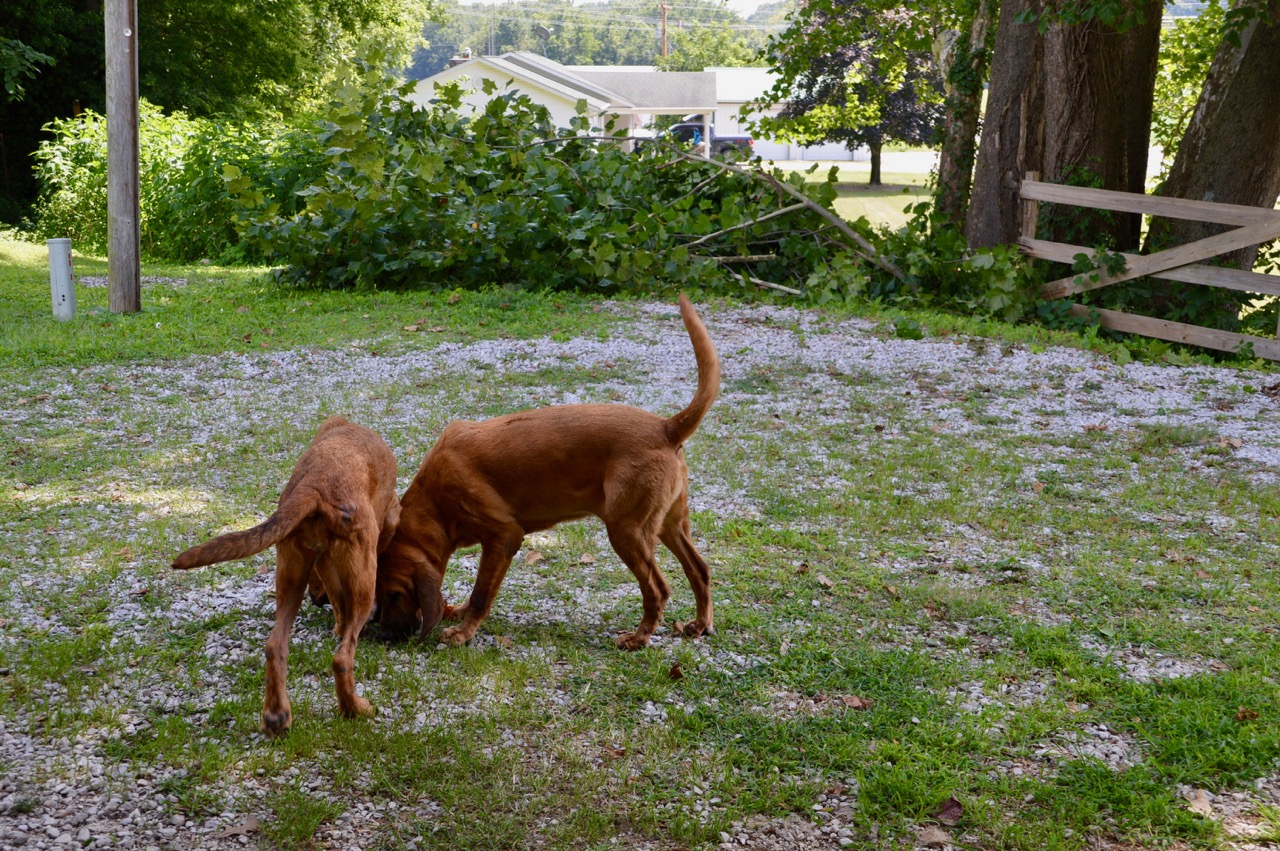 With Sadie and Stella inspecting the work after they drove off, Heidi decided it was time for a little relaxation in the sunshine and the soft grass. 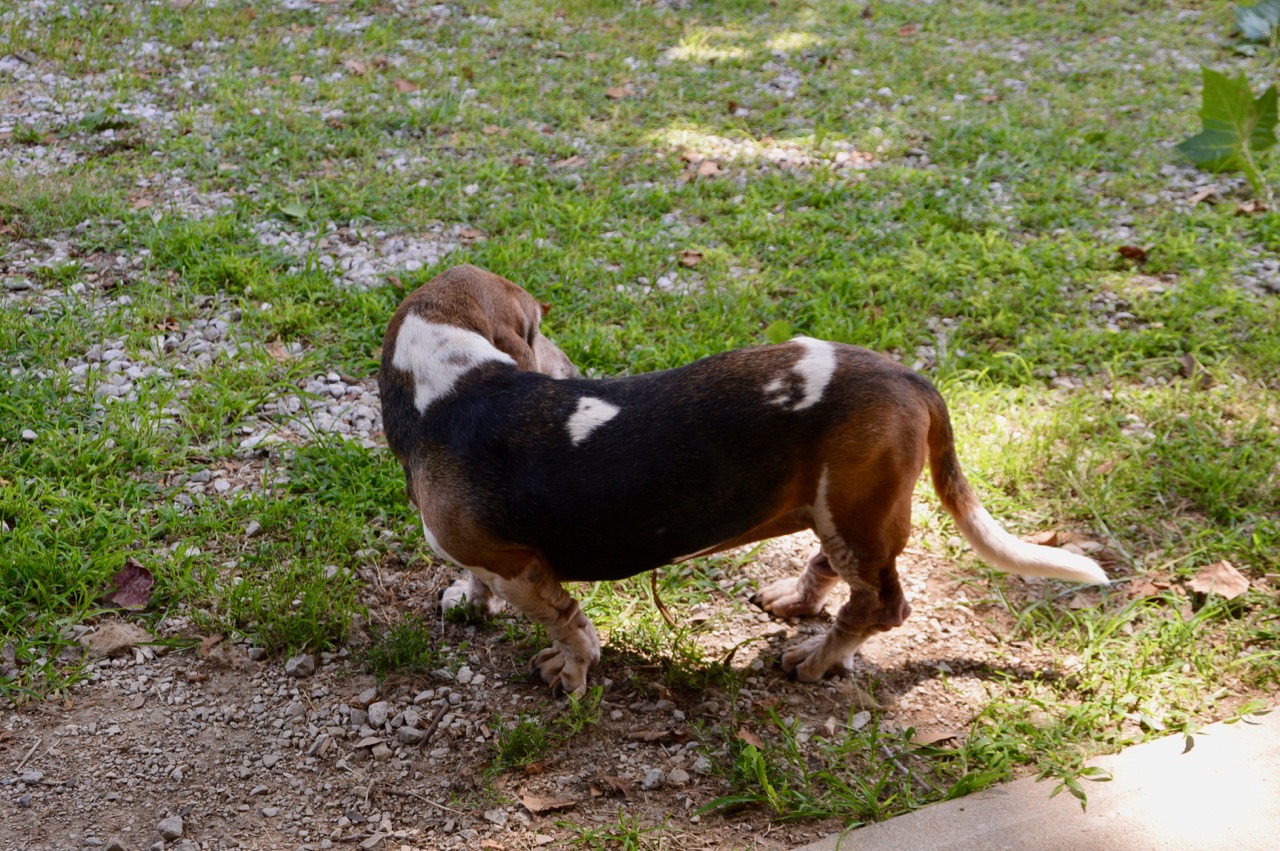 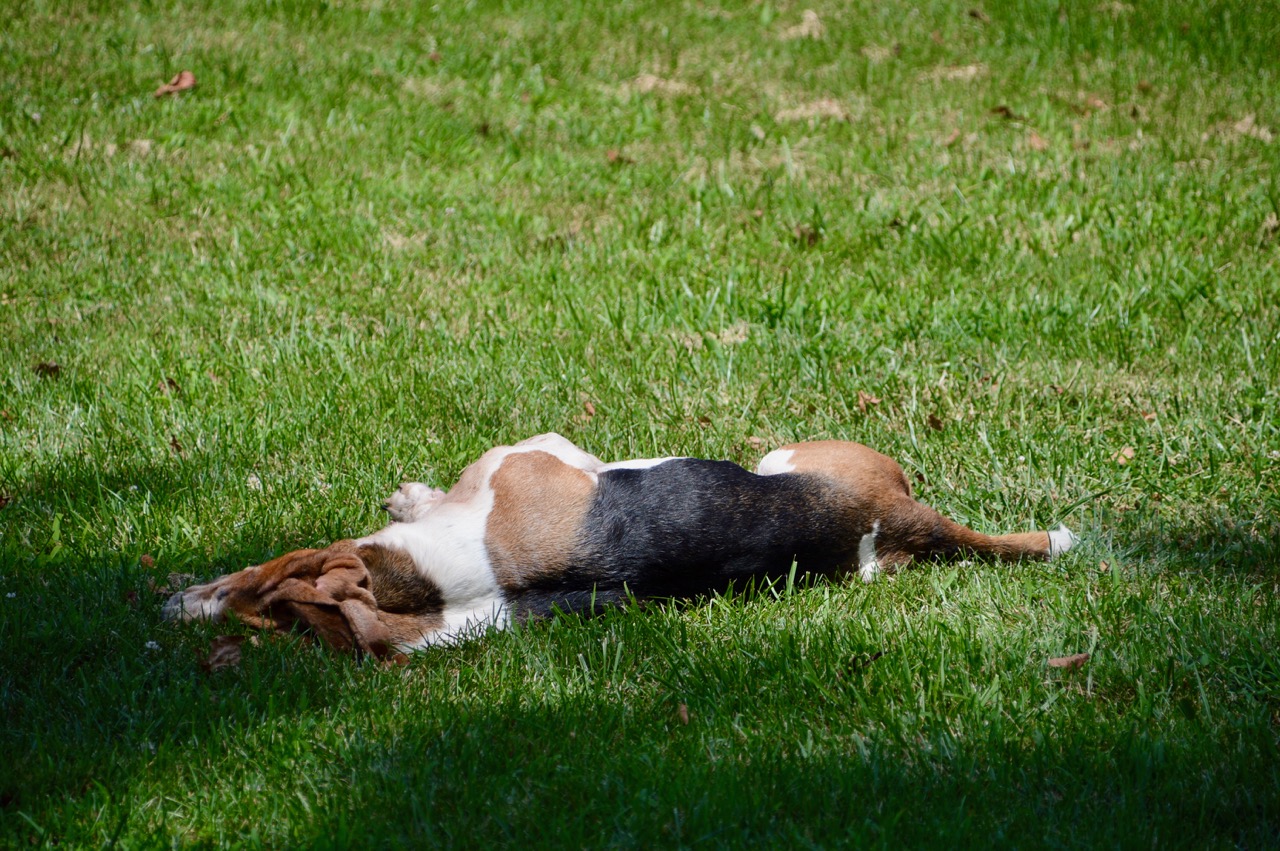 Life is pretty rough when you are a hound in 'the tropics' of Southern Indiana.
at August 02, 2017