An Early Start To Saturday 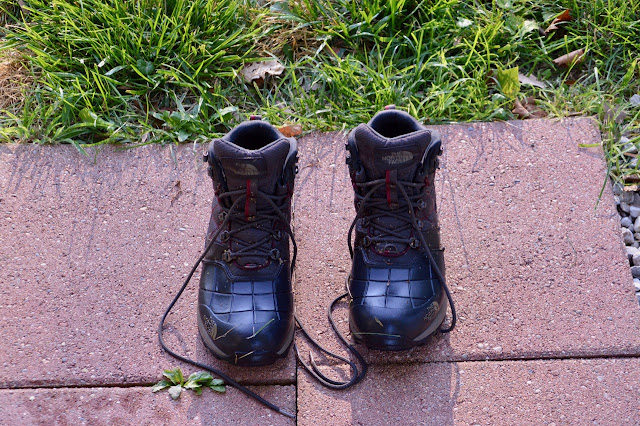 As we started our walk this morning I thought it was a little bit nippy while I wore my normal shorts and t-shirt. The North Face snow boots have become my summer, keep my feet dry boots. After our return I found out why it felt cold ... 58° on August 5th ... 8am.


Sadie did a sprint from the house before I even finished my 1st picture that I take every day just outside the door. As fast as she was taking off I thought we might have 'walked in' on some early morning deer. That wasn't the case though, she must have been running after nothing .. a cat nor butterfly was anywhere in sight. 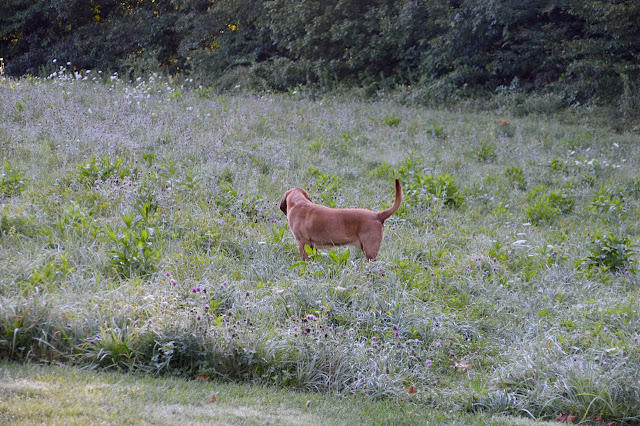 Once again I saw nothing on the horizon. No deer, and no neighbors were outside. There is a large St. Bernard that lives at the house across the highway but I did not hear him barking at us. Sadie must have heard something I didn't. 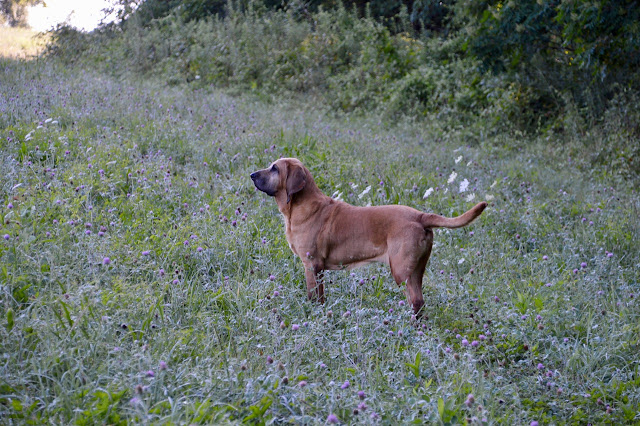 There would be no 'herding' of hounds today. All three were on their own during this walk. Heidi was spread out taking as much of the couch as possible to sleep until lunch. Sadie and Stella were going to have free reign of the field ... go where they wanted as I walked along the path taking early Saturday morning pictures. 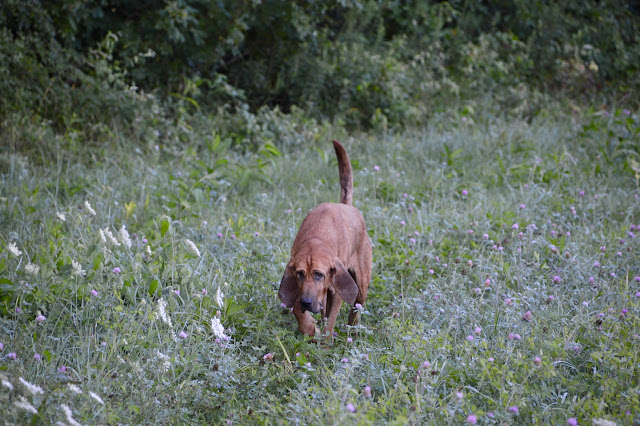 Stella continues to act more like her old self this morning. As the hounds were getting ready to go outside she nudged Sadie's nose as if she wanted to play. That is something she has not done in so long I can't remember the last time they playfully wrestled.

I could tell by the path made in the tall wet field, along the edge of the field and woods, that deer had followed this line all the way around the corner to the back of the field. Sadie and Stella was locked into that scent, working slowly to start their walk. 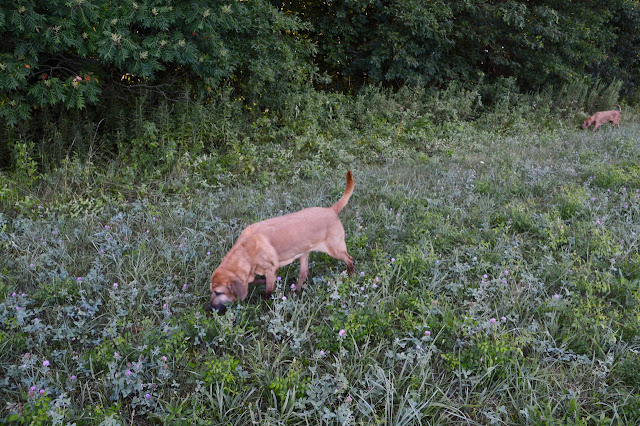 It's not out of the norm but I always find it interesting just how fast this field grows after it's cut in late June or early July. It has changed so much over the years. From only tall hay years ago to a lot of clover, wild flowers and weeds taking over that tall hay the past two years. 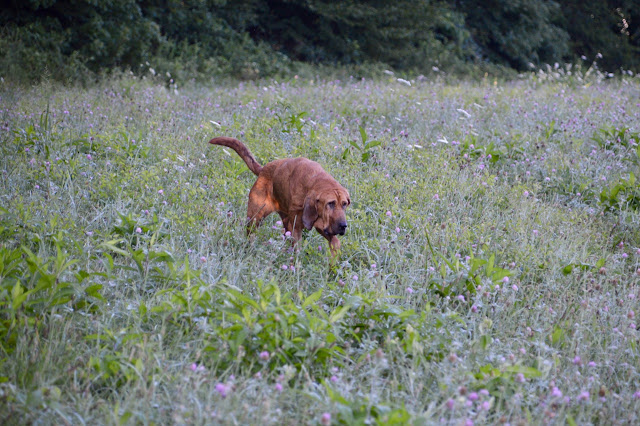 With Wunderground Weather telling me today will be an exact copy of yesterday, and that is just too hard to believe. It was so nice yesterday with a high of 71°. It will be perfect bike riding weather after this post is published. I'm going to be taking the Giant road bike out to ride for an hour or two. 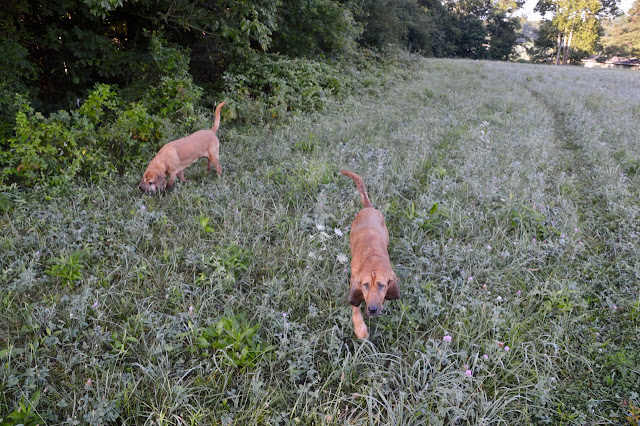 Here is an interesting picture that can only be seen if I get out early enough and before the sun burns off the dew hanging on the grass. I just remembered that if I highlight each photo, one at a time, I can add a link which gives you the ability to click on any photo for a larger image. 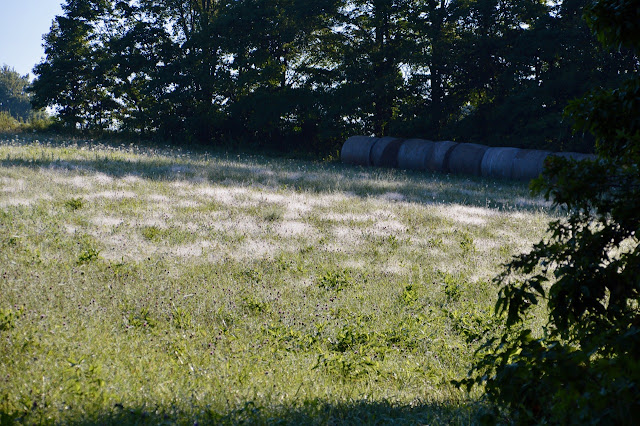 I am not sure if you can tell in this picture but it gives you a better idea of  what all of that dew looks like for just a foot away. 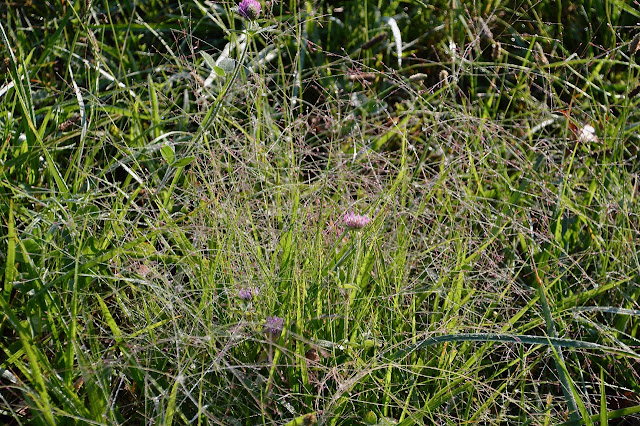 At first I thought Stella was heading to meet us on the return path but the more I watched her through my 200mm zoom lens, I could see she was going to ignore my calls and walk north while Sadie and I were walking southwest. 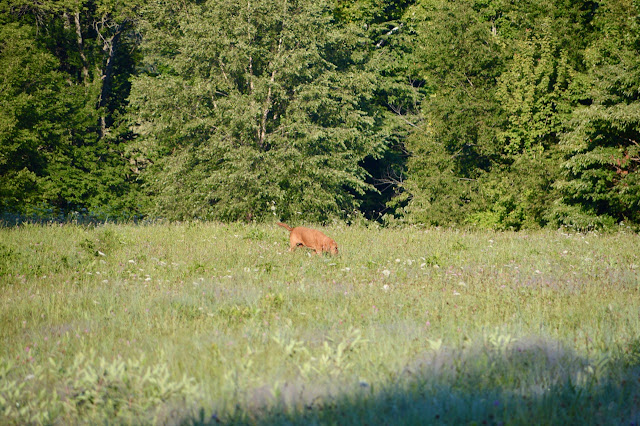 Like most of her morning walks, Sadie's focus is mostly using her investigative abilities, more than eating the 'natural protein' I speak of at times. 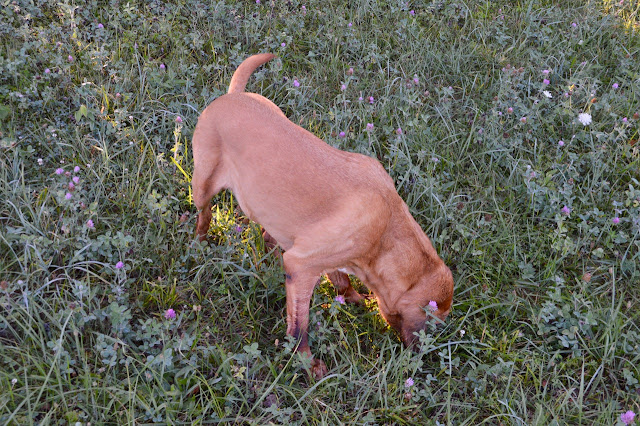 Just because Stella hears me calling her name, doesn't mean she will head my way. Maybe she is just telling me to follow her instead, that she is leading the walk. 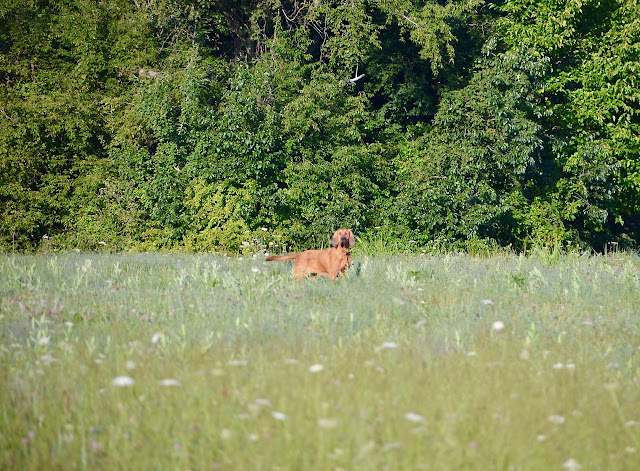 As you can see she is going to give me every chance to follow her, as she continues her walk in the opposite direction of Sadie and I. 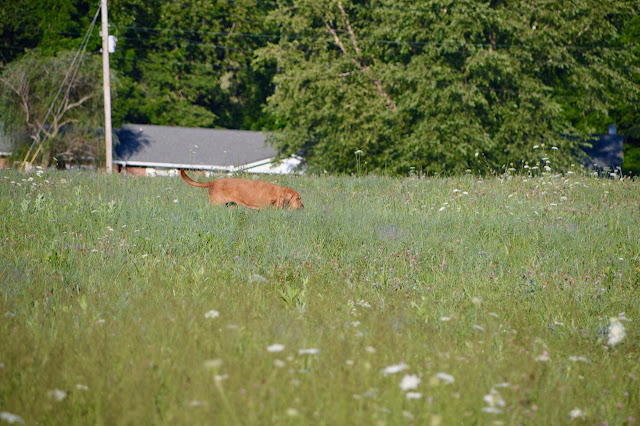 It was a slow process, but she gradually walked a big swooping loop that led back to Sadie and I. By the time Sadie had stopped a couple of times, Stella had caught up. This picture shows she has gain some of her weight back after losing so much of it in March. 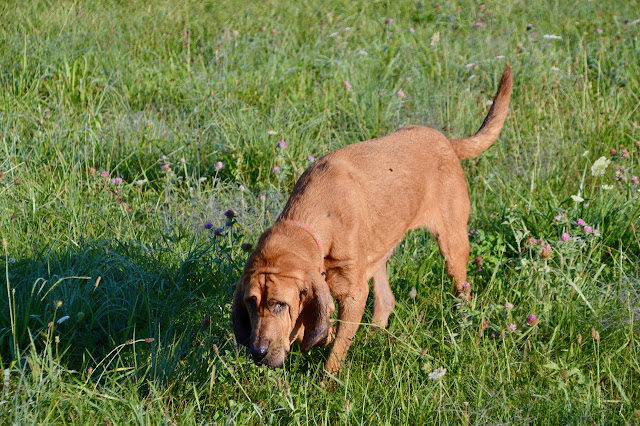 By the time we hit the shaded area of the field again on the return home, it actually felt cold. I cannot imagine ever wearing a sweatshirt in the moth of August where I live but this morning I could have. 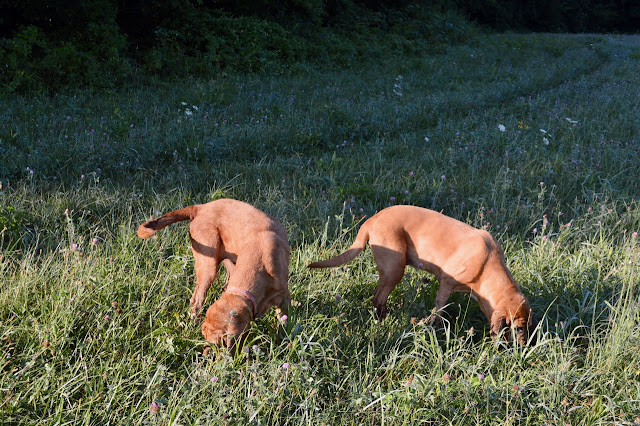 As I arrived at the corner of the house I asked Sadie "where's Stella" ... she looked for her but not in the direction where I saw Stella. 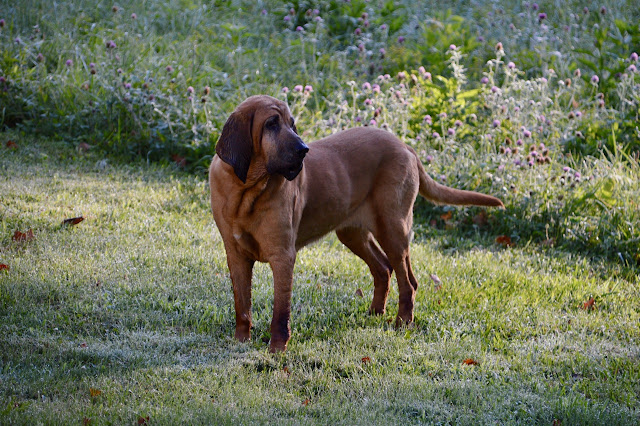 You can barely see Stella just right of center. This would be directly behind Sadie, not in the direction Sadie was looking. That gave me time to go inside and change shoes. By the time I stepped back outside to set my boots in the sunshine to dry this morning, I could hear Stella out of sight, shaking off all the water she had collected during the walk. 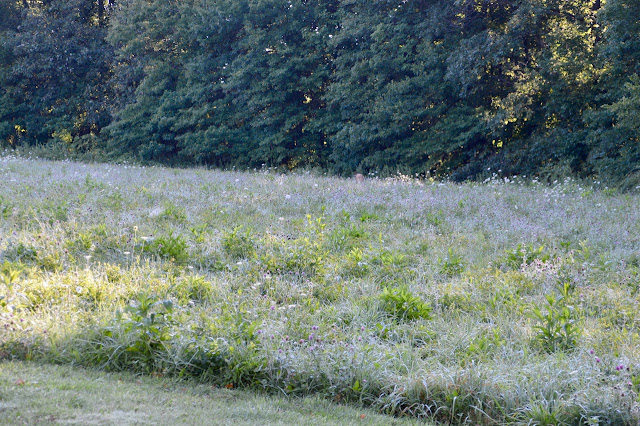 As you see the Wordpress blog template (theme) has changed a few times since Friday morning. Like always I can never make up my mind. Not all have every feature I want. What I like about this design is the sidebar on the right and easy to read. My pages are easy to find, listed in tabs across the top. The posts look good when they are opened.

Each post is easy to see on the main page, especially since I have been publishing two posts per day lately. I don't do that all the time but post when I feel like writing. One of the bloggers I follow will post 5-8 times per day, depending on what his camera has captured or what is on his mind.

What I don't like about this design is the black color for the header but the are only a few choices for change. None of the choices are better if not worse. This design looks too plain, I'd like to have something a little more current with the times.

It seems that a lot of the latest or new designs have most of the things I want, except for two. Most of them put the sidebar of information and links at the very bottom of their pages or they will hide those links in a drop down menu in the upper right corner, that might not be noticed by readers. Most of those newer templates give me the option to add my own header image.

On tablets and phones the sidebar of information will always be on the bottom of the pages no matter what template I use.

Of course if I were to pay for a template, that would give me more options to make changes in design and color. But 'Free' is good when it's just a personal blog that is not monetized.

So there might be more changes to the design later, depending if I want to spend more time looking over the same 174 free templates available that I spent hours looking at yesterday and again late last night.

I noticed the state police were warning people in the local paper yesterday, about the increase of heavy traffic that will take place on August 21st, when the solar eclipse happens. I see that one of the optimum areas to view the eclipse is about a 100 miles south to southwest of me ... and ... the highway that goes in front of my house was one of those listed for increased traffic to and from that optimum area.

That will be exciting times here in 'the tropics' of Southern Indiana.
at August 05, 2017