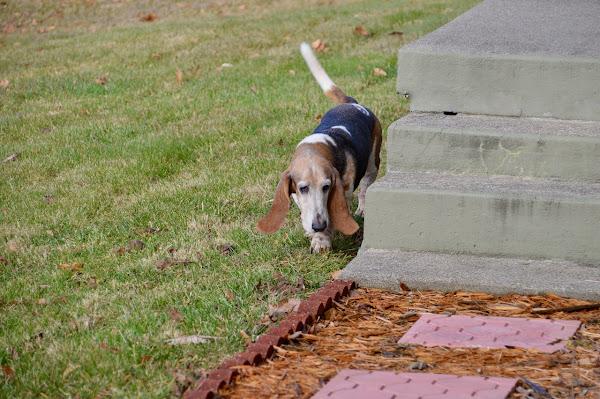 Friday afternoon the temperature started its steep decline to the high 30's. The hounds  enjoyed what little time they had left of the spring type weather. Heidi got no further than just around those steps and came back the same way she went, as fast as she could. You could feel the freezing air rushing in a little past noon . 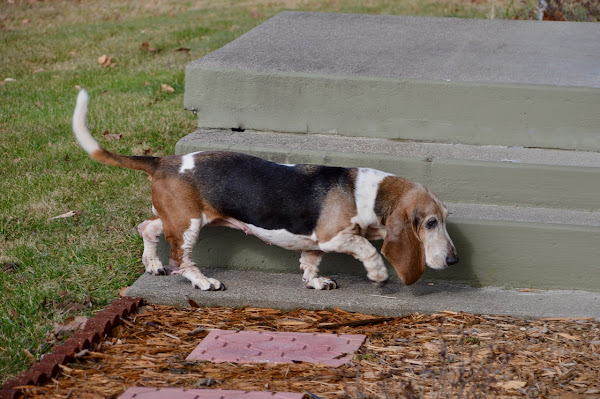 She was set until later that night, so she could sleep the afternoon away ... and she did. Friday afternoon was getting colder but with the bright sunny skies it was so much better than the dark overcast skies we had just a few days ago. Isn't it interesting how moods change when the sunshine is visible? 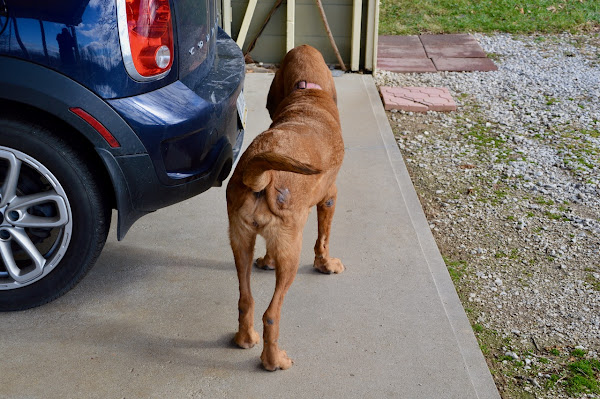 Stella thought it was a nice day for a drive. I just missed her laying her nose up against the back door checking to see if she could open it with a nudge from her nose. She feels her 'nose nudges' are the answer to anything that she wants to open. All of those marks you see on the top of the bumper are from her wet jowls in past attempts of opening the door. 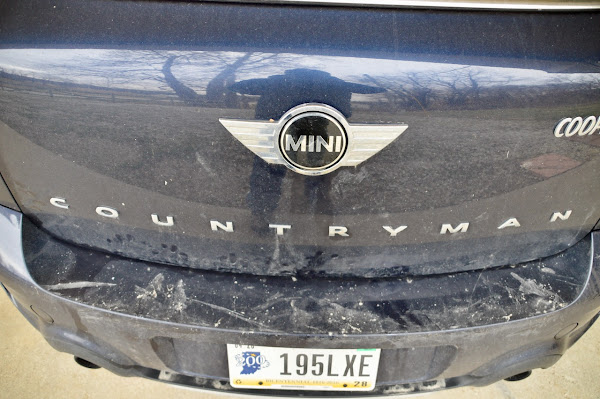 Here is a better view of those jowl marks. I'll claim the fingerprints on the door are mine but everything else is Stella's. You cannot believe how hard it is to remove dried hound drool from car paint. It is worse the smashed bugs on the front of any car or truck. 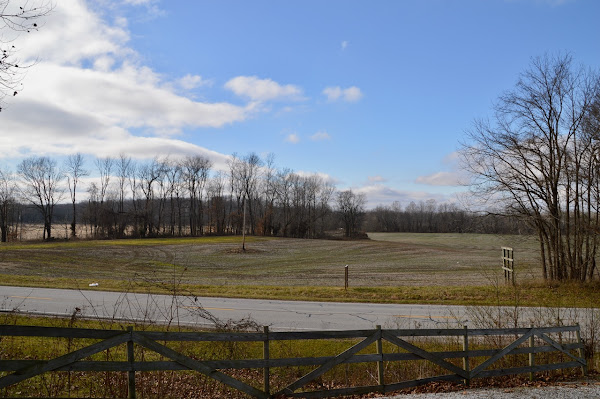 With skies like these Friday afternoon it was hard to imagine bad weather anywhere else. What would this morning bring compared to what I was seeing on the national weather stations? 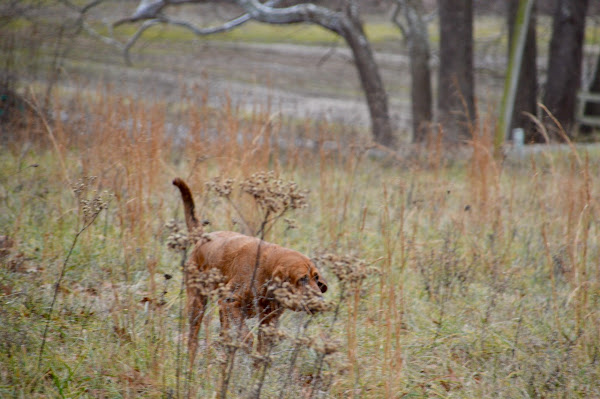 It turned out to be nothing more than a 27° drop in temperatures in the last 24 hours with most of that decrease taking place by 5pm on Friday afternoon. No matter what, Stella was ready to 'move out' by 8am this morning. The walk was windless, not too cold and extremely quiet. 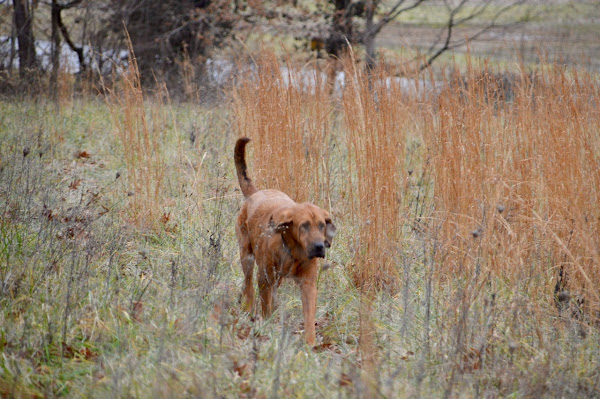 I am finding on these morning walks I am having a hard time focusing the camera as I look through the view finder. No, I cannot take photos by looking at the monitor on the back of the camera. What is strange, the camera is always in auto mode and I flip between 'single point' and 'all area AF' ... I should be able to aim at Stella and have perfect pictures. Are my hands shaking that much to produce bad photos like these from this morning? 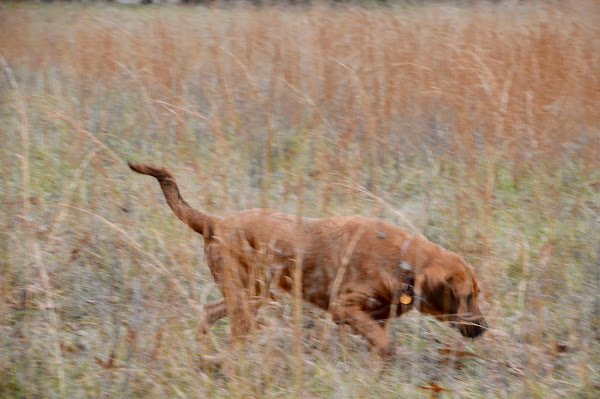 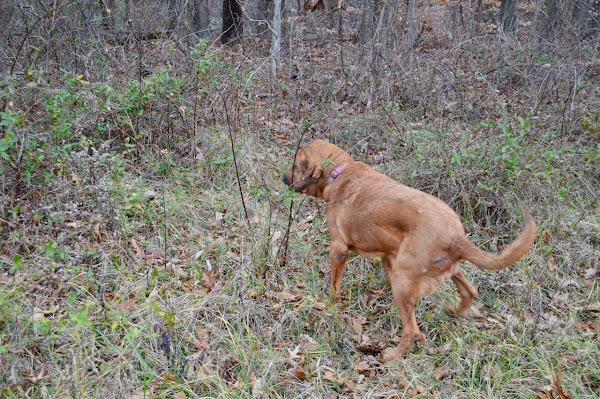 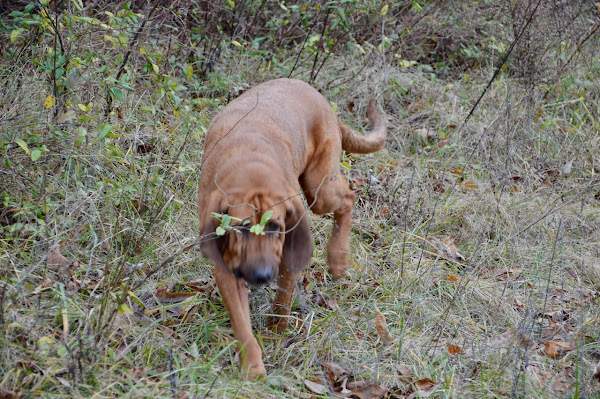 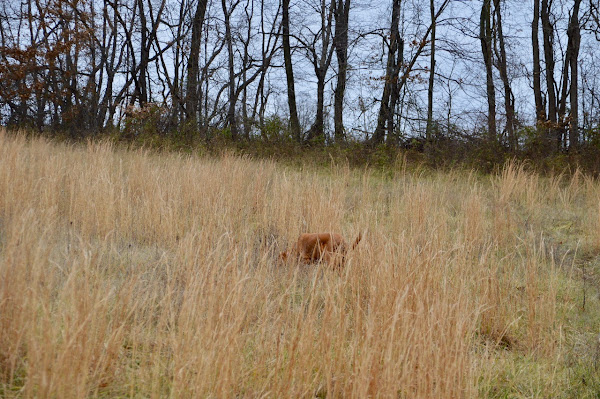 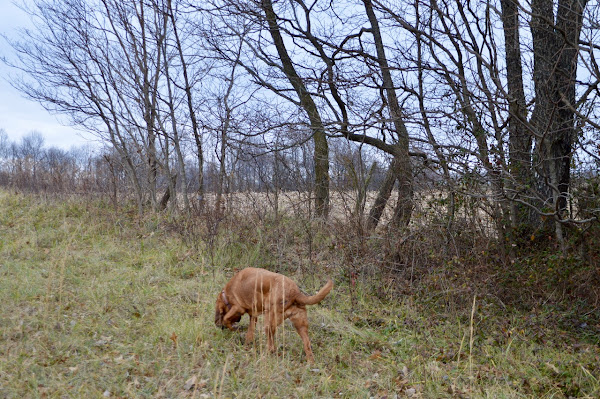 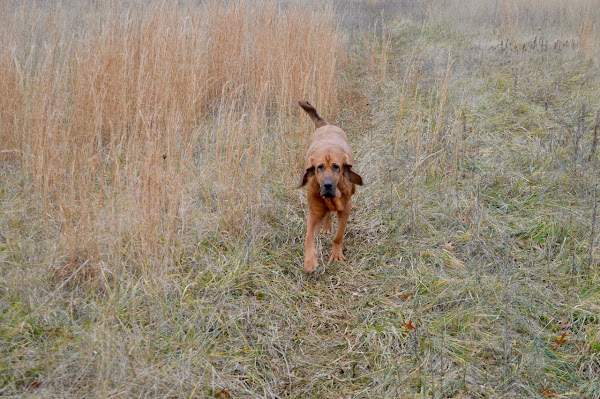 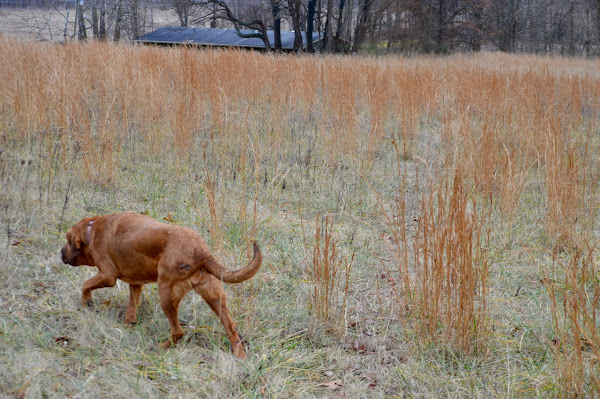 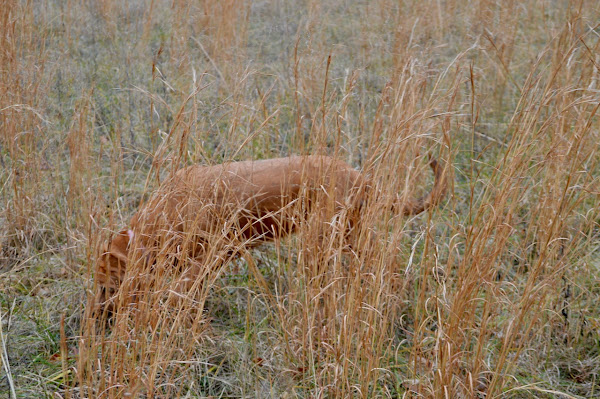 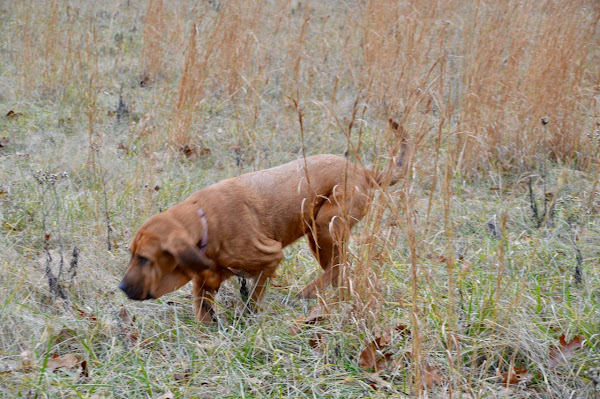 In the 'all area AF' mode I can choose to have Stella in focus or the foreground in focus with her blurred. Even when I try that I have a hard time seeing if she is in focus as I press the shutter button half way down, waiting for Stella to come into focus. I have no doubt my hands are more of a problem than anything else. Plus my left eye as the better vision of the two but you could never tell it from those photos.

Today and tonight is a big day for college football as the 4-game playoff starts tonight. I'll start the day of college football by watching the Michigan - Florida game at 12pm. I did some early grocery shopping this morning and passed by all the chips that were on display out in the open with price discounts. The only fruit I bought were bananas and red delicious apples but forgot the almonds. So there will not be a lot of things to munch on during all of these games compared to a few years ago when it was just one huge eating festival for 12 straight hours.

When I use to work with Microsoft Excel at work and used the Mac Edition of Microsoft Office at home, it use to be so easy to insert a bar chart into certain spreadsheets. Compared to Apple's Numbers spreadsheet program, Excel was so much easier. A couple of years ago when Microsoft Office stopped supporting the 2011 version with updates, so I would buy their new 2016 version of Office, I decided instead to try out Apple Numbers which came free with my computer.

There was a slight adjustment but after I started working with Numbers just here at home, I liked it. Both Excel and Numbers had their good points. Yet I am almost to the point this morning of converting all of my Number spreadsheets back to Excel. Since I rarely send these spreadsheets anywhere outside my computer hard drive
The problem is Microsoft Office for Mac 2011 is a 32-bit software. Microsoft chose not to update that year to 64-bit, which is needed to run on the latest Apple Operating Systems. Now 2019 as of October 2018 of Microsoft Office was 64-bit of course.  :)

Why the switch?  Making simple charts that will be inserted into some spreadsheets, like I already have in years 2007-2018.

I do know one thing ... including the time it will take to convert those spreadsheets back to Excel, I'll have those few charts made for some 2019 spreadsheets faster than it will or has taken me to read the Numbers manual on how to insert a SIMPLE spreadsheet !!!! I cannot remember how I did it on Numbers last year.

Good, that will give me something to do today before the first football game at 1pm.

Evidently HughesNet Gen 5 fixed their internet speed issues ... I believe that was the REAL reason that I had slow download speeds the past week. I never did believe their excuse of bad weather where my 'gateway' was located in Utah. Staring last night the speeds were back up to the normal range of 30-45Mbps. That's just my opinion because I've had great speeds in all kinds of stormy weather for the past four years.

After a lot of thought off and on the past few weeks, I went back to Facebook yesterday. It is a great way to stay in touch with old friends. Many of them do not read this blog or any other blog because they don't have time. Facebook is much easier for them and for me to keep in touch. They wanted to see the few pictures I post of the hounds. They are the same exact photos I post here, just fewer of them. I also find it easer to track my sports teams, favorite music, MacRumors forum and specific groups.

I opened my accout to the 'public' so it will be interesting who finds me that I know and will send a friend request. In recent years I never looked for many friends, 10-15 maybe. I did have an old friend find me last night after opening that account, then gave me a call. We played on the same basketball team in high school.

Instagram might be my next jump back into social media. I would only use that to follow friends that like showing pictures of their dogs. Plus a few blogs I use to follow do not blog anymore but write on Instagram instead. Again the good part if you use it responsibly is there is good information. Yet there comes a price with that, with lying Mark Zuckerberg at the helm.

I also went back to Google Chrome yesterday. Retro Roxie sent me a link inside WordPress giving me some ideas to check out, to find out why Google Chrome kept logging me out of my own blog plus not letting me make comments or hit the 'like' button ... the cause was, I had a setting not letting 3rd party website to collect cookies and data of where I have been on the internet. Once I unclicked that setting, it worked perfectly.

I don't care what Google collects or do. It's like I said a few times in the past few years ... if you spend any amout of time, little or a lot, on the internet then they already have the personal information THEY need and are looking for. That data collection happens so fast you cannot even back out of the website you just went to. No big deal ... let them make billions off of me in advertising while I use their great services for free.

It's bright and sunny today in 'the tropics' of Southern Indiana.
at December 29, 2018