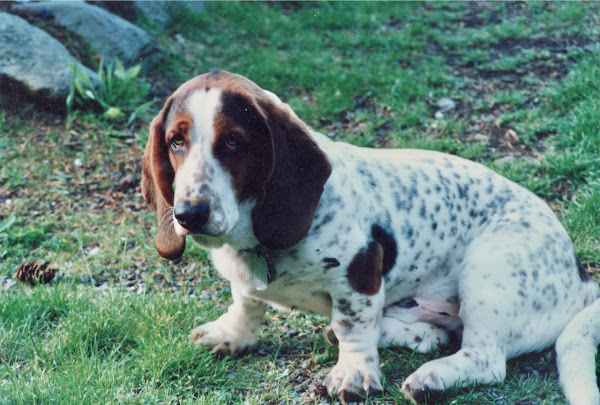 In 1987 I decided that it was time to buy my first basset hound. I always wanted one after seeing a basset hound on the show Columbo with Peter Falk many years before. When I saw that ad posted on the bulletin board in the lunch room at work I called immediately. Mark had a small number of pups to choose from.

Why did I pick Harry?  He was off by himself in the square pen padded with blankets on one half and newspapers on the other half. He didn't need his littermates, he was independent, a free thinker. Soon I would find out what that meant.  Ha Ha

He was a loyal companion and very adaptable with change. To him change just brought him a new adventure At the time I was living a few miles from Coupeville WA ... in the area of Ft. Ebey SP. Little did I know that he was a "wanderer". I can honestly say there was not a person he met that didn't like him. Many wanted him. Everybody loved Harry.

A few years later we took a break from Whidbey Island moving to Boise Idaho, we were not there too long at all. The boss of a friend called me offering me a job in Keystone Colorado, salary and a ski pass. Who could pass up a chance to live near 6 ski areas during ski season? Before Harry even got to know his Boise neighbors we were loading the U-Haul truck, putting the car on a trailer and heading to Dillon Colorado. He loved riding in any car or truck, even if I wasn't the driver or passenger. He'd go for a ride with anyone. 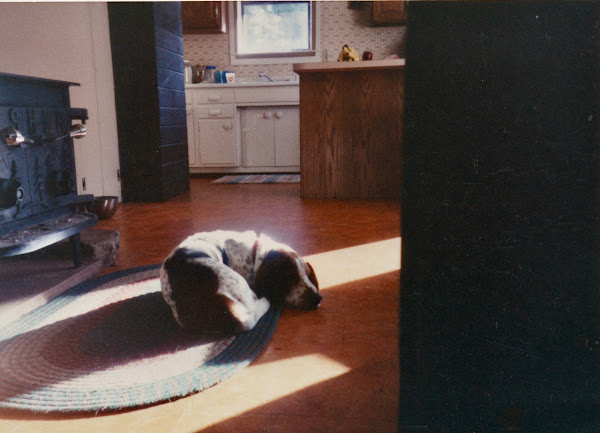 It didn't take to long for him to figure out if he wanted to stay warm in that small cabin south of Breckenridge Colorado, that wood stove would be his best friend. Only one time did he make a mistake of a lifetime.

While sleeping he rolled over on his back from one side to the other catching his rear paw under that metal lip on the front of the wood stove. Hotter than hell would be an understatement. Needless to say the sound from Harry scared the crap out of me as I sprinted his direction, with a sound I had never heard from any breed of dog.

He also figured out that the warm waterbed (remember those? Ha Ha) that  I used to sleep was THE best play to sleep. He was notorious for crawling up on the bed, lowering his nose under the down blanket and moving into his sleeping position. 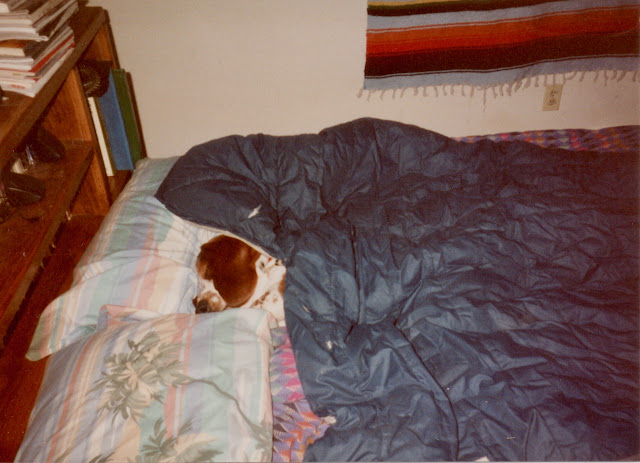 While in Colorado he proved that people were not the only living creatures that had big dreams. I'll let this photo explain it better than I ever could. 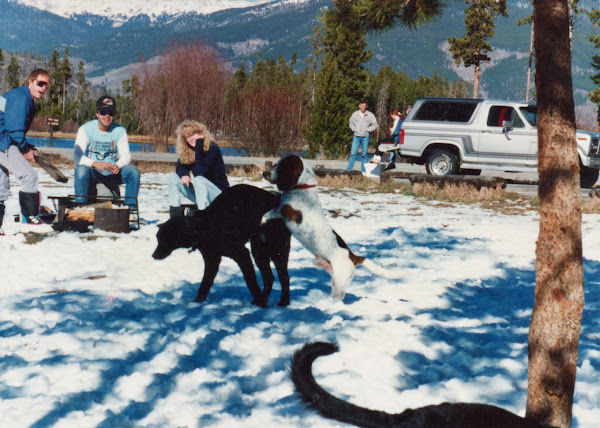 By the end of ski season that included too many close calls with Harry falling through the high levels of snow on our daily walks plus hit by a porcupine only once, we decided that Whidbey Island was where we wanted to live and moved back to Oak Harbor Washington.


We found a rental that we could not pass up. It was a little small but not bad for me and two basset hounds. At the end of Jones Rd. was a fantastic view and Hope Island so close you could almost touch it. We lived in the bottom unit. The owners lived in their house on top, spending their winters in California. We basically had the whole place to ourselves. 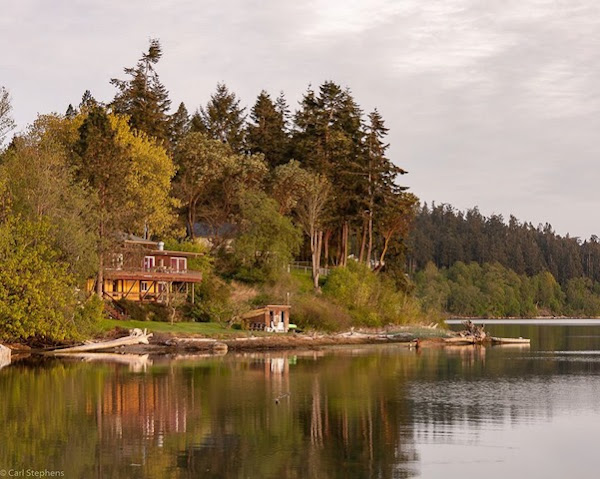 Harry thought the view from the couch wasn't bad either. 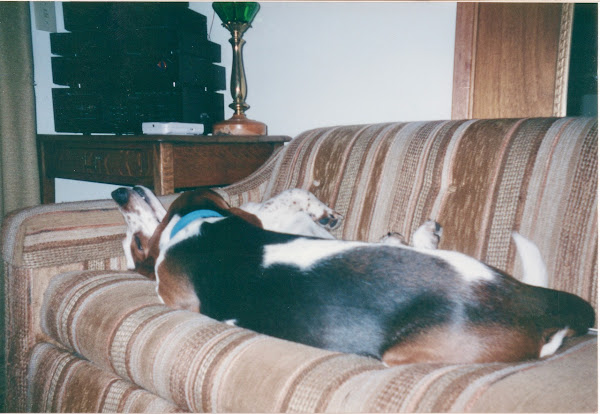 By this time he had a running mate but Barney was a little more in control. A homebody if you will. He didn't wander nor did he follow when Harry would take off to who knows where. Barney was the one that would come and get me with that look "Harry's gone." 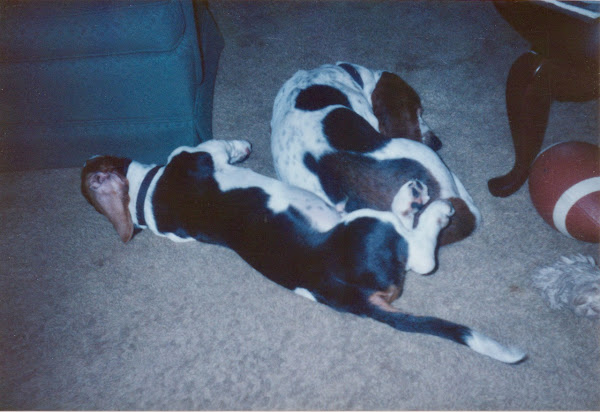 While I was at work my landlord that lived in the house above us, told me Barney and Harry were very quiet dogs that didn't do much more than this all day long. Harry thought if he was going to explore late at night without telling me, then he needed his rest. 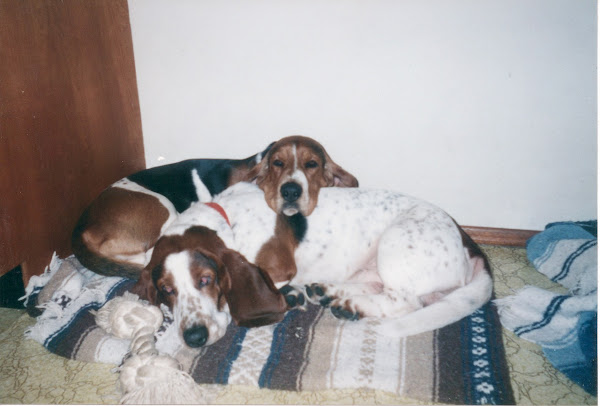 Harry was the type of basset hound that might wander off for long periods of time but he would always come back on his own, no matter how long or how many miles he covered. There were many times I'd let him out late at night for that last pee trip and he would leave. I couldn't find him either on foot nor in a car. He was gone !!!  A regular occurrence.

I get a call about 2am on night letting me know that Harry was at his house, someone that I did not know. He found my phone number on the dog tag Harry wore. The interesting thing was, this guy was calling from three miles away!!! He laughed at the end of the call.

"My wife and I don't have a dog but we heard a dog barking non-stop and it sounded like it was coming from our patio. So as I pulled the patio curtain back and here is Harry (he didn't know his name). I opened the door and without hesitation Harry walked in like he lived here, walked over close the wood stove, laid down and went to sleep." 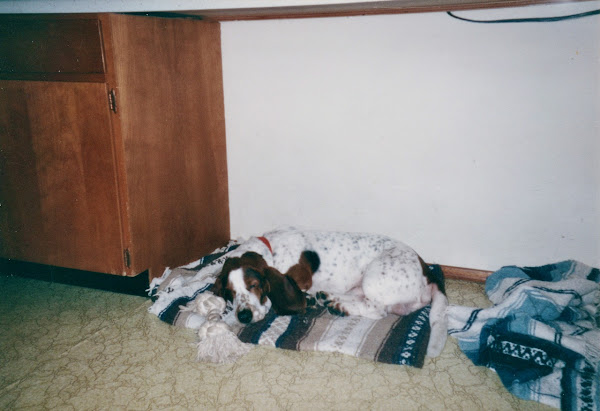 The second example is a little more local and didn't take more than an hour. He would always go to the door to go outside and his last trip was usually around 11pm. I started noticing that every time he would come back that winter he smelled like smoke. Like campfire smoke or even a fireplace smoke ... could it be??? Surely not.

That spring there was a construction crew on the property doing some work. As Harry, Barney and I walked out for our early Saturday morning walk on the Ala Spit a few hundred feet away, this young guy goes "Hey, there's Harry." We exchanged stories, he knew he was my dog but Harry felt like his .... those winter nights that Harry would come back smelling like smoke ??? 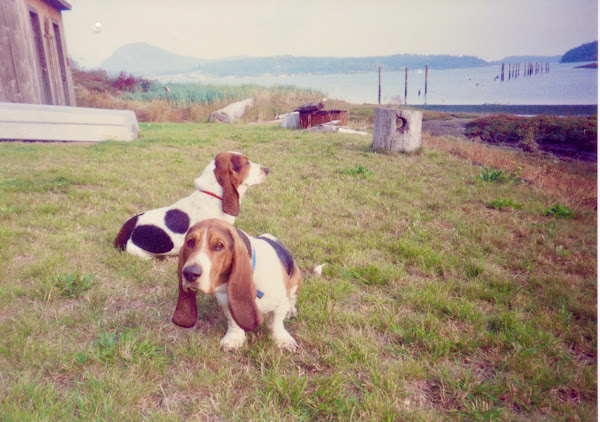 He still like spending time looking out over the water. Luckily he did not figure out the crab pots were within a 100', he liked fresh seafood, bones and all in some cases. Salmon especially.

I had one those times where I will make an off the wall decision like I have spoke about recently. Well don't ask me why but for some strange, very strange reason I decide I did not want to rent anymore, wanted to live closer to town and ended up buying a condo in the middle of Oak Harbor Washington. Basset Hounds and all.  (terrible decision) 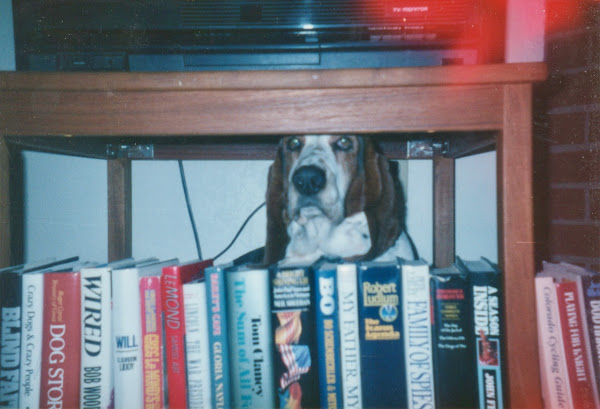 He decided the best place to sleep was not in the bedroom on a pile of Mexican blankets that he loved but behind the row of books, under the tv in the living room.

In December 1994 we moved to Bloomington Indiana. Soon after Harry had lined up a modeling job through a neighbor. Fine Light Advertising paid him beer money for a photo session in town. He loved every minute under the bright lights with the sounds of cameras clicking nonstop for that perfect picture. People pampered him all afternoon making sure his hair and collar looked just right.

Harry learned that type of work fast. He wasn't going to work for peanuts, he had demands. He wanted a break every hour so he could go outside and pee, or walk around the backyard while the camera crew were inside laughing so hard they couldn't stand up straight. They all loved Harry. 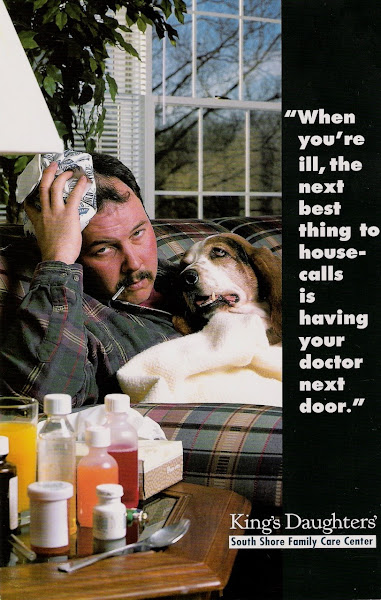 A couple of years later we moved to the house we reside in today. The field looks about the same. The yard looked a little rough compared to what it looks like today. You could not tell the borderline between the field and yard. 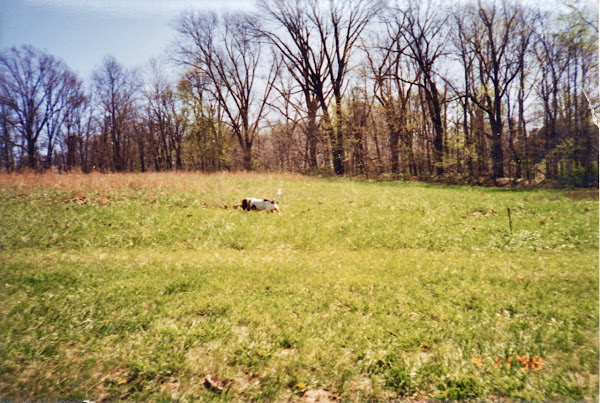 The yard and tall grass didn't bother Harry though, he had a whole new planet to roam. He was easy to find out there by the white tip of his wagging tail. 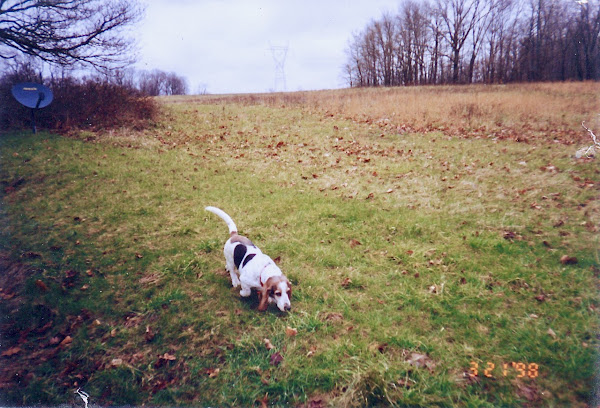 It's pictures like these where I can answer my own question?  "Is the field and yard eroding or has it always looked like that?" Actually it has not changed much in 20 years and my house is not being swallowed up by moving land, like I imagine sometimes. That's an old Prime Star satellite dish you see there. They were bought out soon after I moved by some company in 1999 by the name of DirecTv.

Of course living in the country expanded Harry's explorations tenfold. I cannot tell you everywhere he went and I'd have to go rescue him. With my location I wanted it all to stop with the highway so close to us. Thankfully in the years he lived here he never had any close close calls getting hit by a car. He would cross that highway at all hours of the day or night if he was in the wandering mode.

I guess the one highlight of his roaming ... this time he found something he could do when it was hot in the summer. He would head north in the field, walk behind my neighbor's house where Sadie and Stella use to roam, then over to the neighbor north of them. He preferred to lay on the top step of their swimming pool since he found out that laying down on the second step the water was too deep for him to sleep under the sun.

The first time the neighbor called me, she was laughing so hard she could barely tell me that Harry was at their house in case I was looking for him. 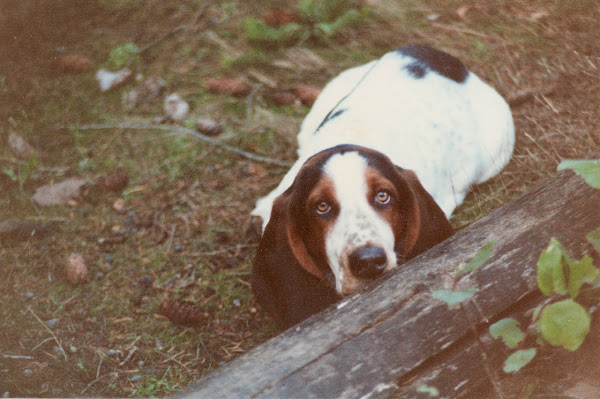 His official AKC Name on his "papers" was Harry Gonso of Indiana … the starting QB of the 1967 IU team that went to the only Rose Bowl in school's history, January 1968. I sat in front of the real Harry Gonso at an IU basketball game once but didn't have the heart to tell him there was a nationwide famous basset hound named after him. 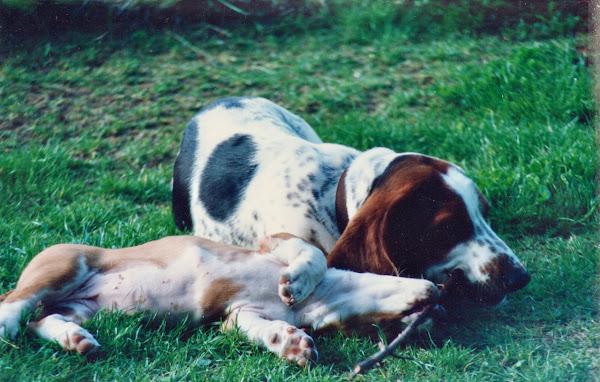 He liked all dogs big or small and all people, especially if they were willing to let him have a couple of sips of their beer. Healthy minerals you know. 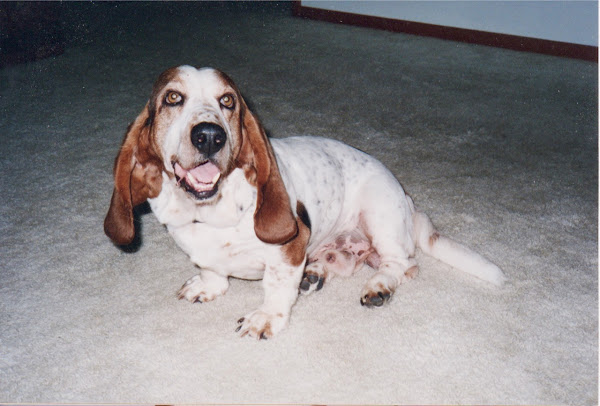