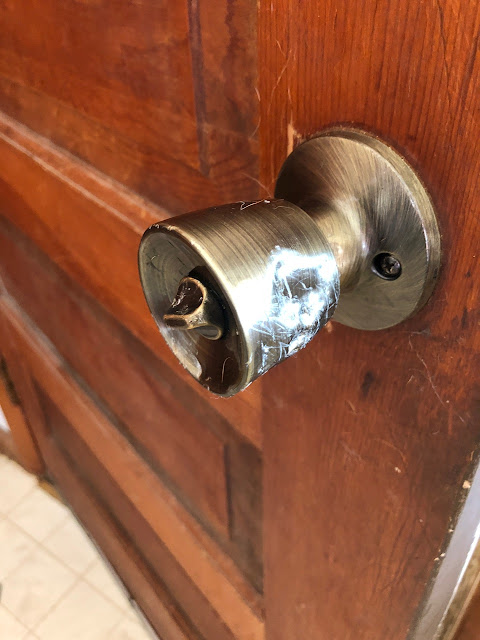 Last Friday I returned from a trip to buy groceries in Bloomington, I found it a little odd that my door key was unable to move the lock so I could open the door. The door knob was installed sometime in the past year and worked perfect. I finally got it to move enough to unlock the door but it was hard. That wasn't going to be the biggest question of why, no ... the shock was when I stepped inside to see Stella sitting in the kitchen looking at me, with Heidi behind her. I had left both in the bedroom with the door closed, their normal hangout location when I am gone.

Someway somehow Stella was able to open the bedroom door. It has a round door handle. She has tried to open that door in the past, and obviously many times, before she could figure out just how to jiggle it enough to pull it open. I had seen signs that she had been biting the bedroom door knob hard enough to put dents in it. Before I leave I always check to make sure the door is latched and cannot be pulled open by her.

This past Monday I had a problem. I set up "Plan B" to keep her from getting out into the house, with a baby gate adjusted to it's tightest position and just for good measure I put a kitchen chair behind that gate ... at least if she jumped over the game (I've never see that happen) she would have to really be good to clear the chair. If she was able to shove the gate open maybe that chair would stop the gate. 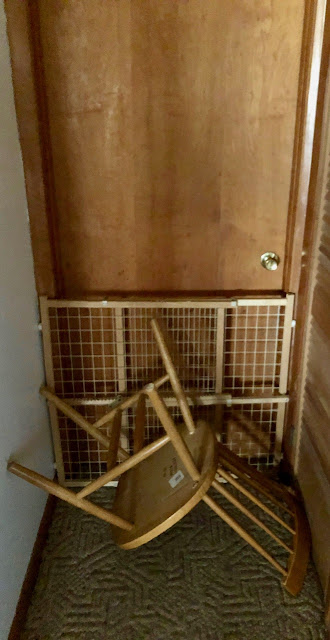 After a trip to the recycling center only 12 miles away, a trip that took me only 25 minutes total, I return home to see the bedroom door open and Stella is trying to dig a hole to get under the gate. Luckily she did not scratch my hardwood floor in the bedroom nor tear a corner piece of carpet ... but she was digging fast and hard enough to do that.

So just like that Stella and I have returned to the first week she was here in September 2015. Her separation anxiety has returned after a 17 month vacation. Why was she doing this? What do I do next? I spent a little time thinking about both questions but not constantly.

Her next big test will be today when I go to the library and a short stop at the store for dog food. 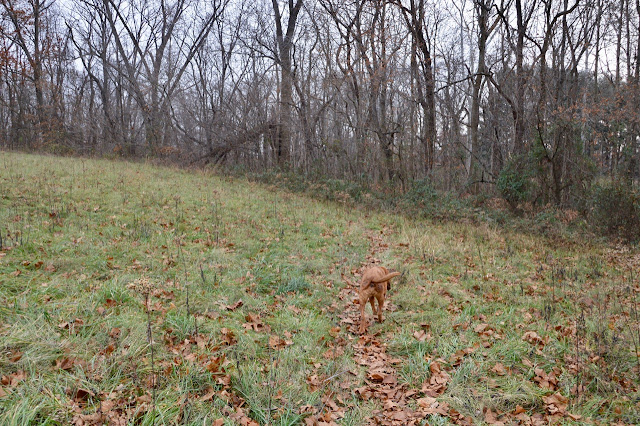 We still take our two walks per day, in snow flurries sometimes but we will cancel them if it's raining or has rained. Believe it or not this morning was one of our "brightest" days lately. No sunshine but a much brighter overcast. 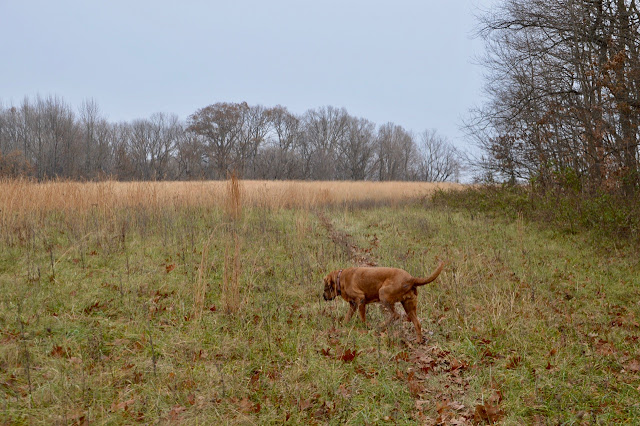 I have to admit that after almost three months I have still not gotten use to doing this walk without Sadie. Some of the time it really bothers me and the joy of taking this walk is lost. I think about her different times of the day and night and I find it very hard at times to crawl out of the past. She played a big role living in 'the tropics'. 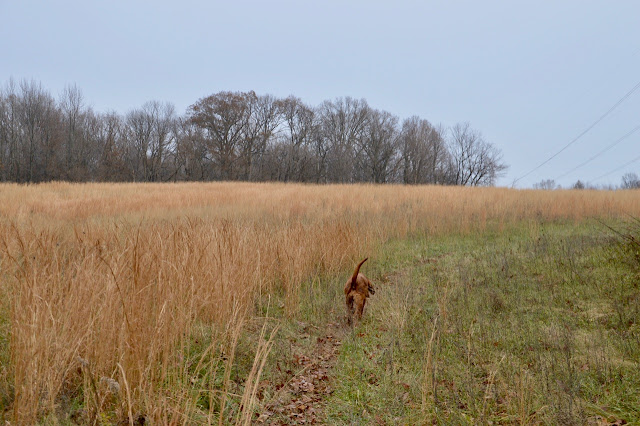 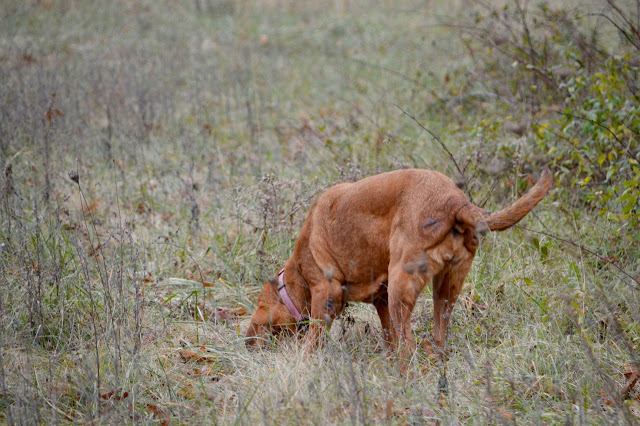 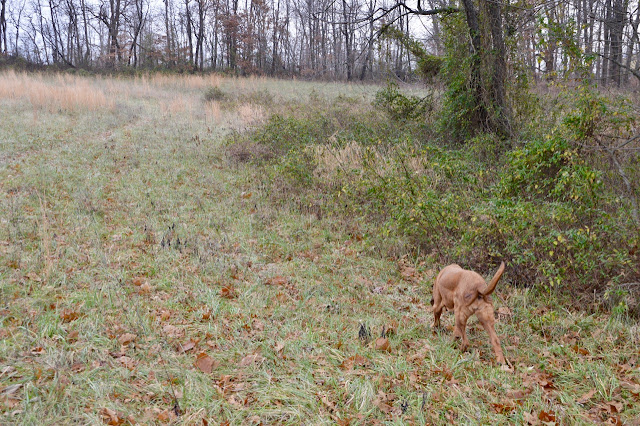 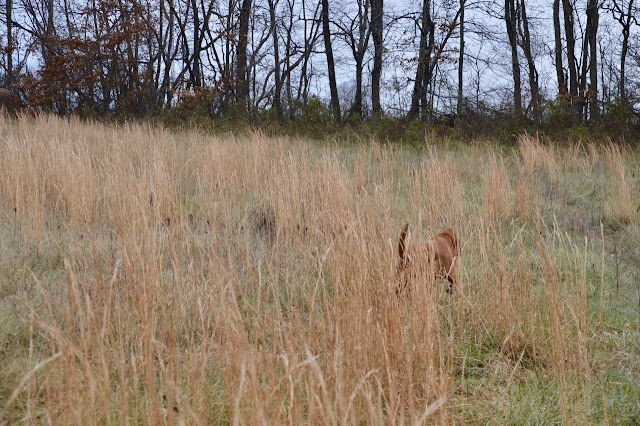 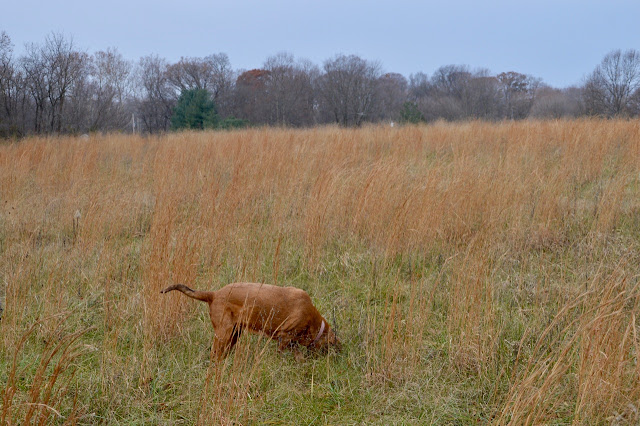 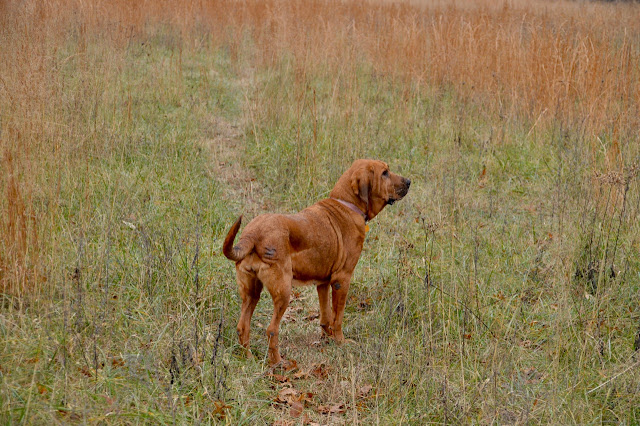 Facing the woods to the north Stella has to be catching the sent of deer. There is nothing else in that direction that would cause this much interest. 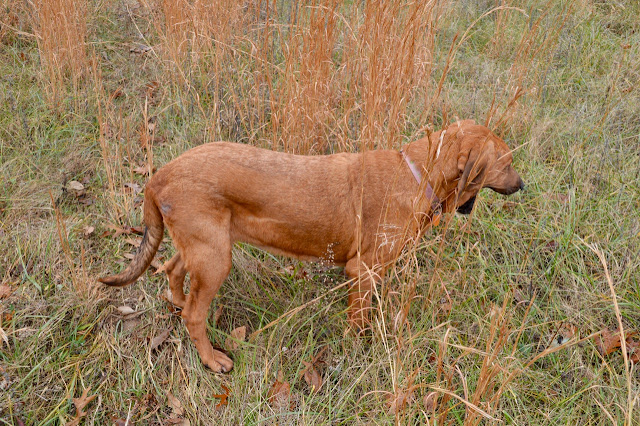 Maybe I am not the only one that gets bored with this walk or taking the same photos ... I did have to wake her up this morning to take the daily morning walk. Sadie would have always been giving me the stare to get me started. I have found out that Sadie helped herding Stella on these walks more than I realized. Anymore it's almost like work trying to keep Stella moving in the direction of the path. She never falls back and runs to catch up. I always have to go get her. 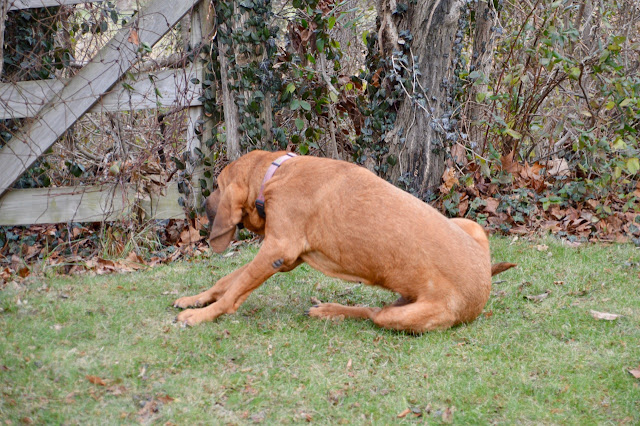 After three weeks using the GlycoFlex Plus for her hips and joints I have seen slight improvement. She has never ran full speed like she use to but seems to be more active with occasional turn around hops and then short bursts of speed while we are walking.

A possible downside to this glucose and MSM supplement, she seems to be scratching herself a lot more than before as if there is something she is allergic to in the supplement. That is a hard thing to figure out as I did all that research into Heidi's skin allergies a few years ago. 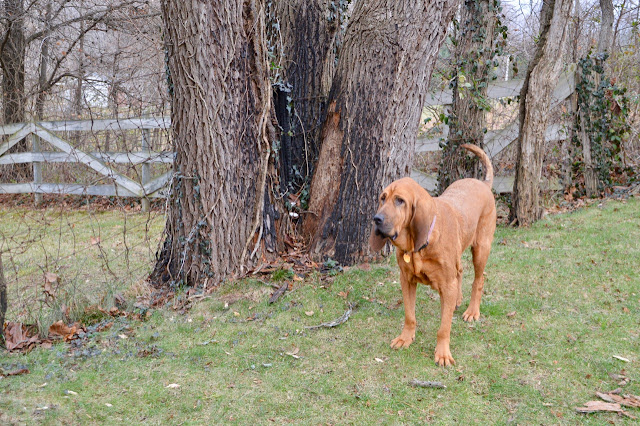 Back to her anxiety when I am gone. In the past when she destroyed something while I was gone I'd take photos of it and then date them in my Apple Photo program, filing them in their own folder. So from those photos I know she went 17 months without tearing up anything in the bedroom while I was gone. Some of those times I was gone for 7 hours if I was visiting a friend out of town.

I first thought she might be trying to find Sadie, thus getting out of the bedroom and trying to open the kitchen door to get out of the house. Based on all of her nose and jowl prints on my clean window in the kitchen and the smaller window on the kitchen door I thought maybe someone had been at the door ringing the doorbell while I was gone. It was obvious she wanted outside.

Yet a few weeks ago when I had someone ring the door bell when I was home, both Heidi and Stella sat in the kitchen facing the door and not moving. They didn't bark and did not stand up to look out the window to see who was there. Sadie would have been standing at the large window in her attack mode.

I have not seen any stray dogs or cats come through the yard during the daytime in years, nor have I seen any deer in the field in the past year based on dated photos.

So who knows ... I hope to come home today with no surprises.

I have a couple of options to keeping the bedroom door closed no matter how hard she tries to open it. If I buy a new knob with a key lock, she will only bite into the new knob. With it being hard last Friday to turn my key when she bit into the kitchen door knob, it would be possible that it would not open if she bit into the locked knob hard enough.

From what I have found on my internet searches, the best solution seems to be some sort of lock from outside the door in the hallway that would keep the door closed and in no way could she get to those latches or locks.

She is a big funny dog that has kept me on my toes since the day I brought her home. Stephanie warned me she was an 'expert' in escaping, even from a large indoor kennel. Maybe she thought I needed some new things to add to my 'to do' list for the winter.

Heidi in the meantime is doing very good and is only active after her lunch where she goes outside then does a few laps of running around the living room upon her return.