The Changes Continue With Me 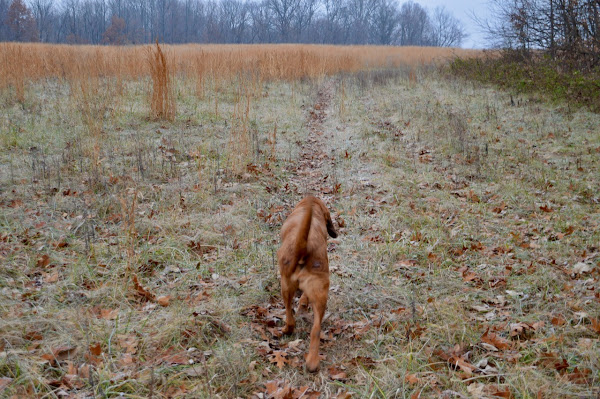 It was a day of changes Saturday as I made a couple of mistakes that I mentioned in my previous post. A lot of them were blog changes but some of the small changes with me still continued into this morning. I guess it's one of those moments where my brain might be in the overdrive mode, where I cannot make up my mind what I want in the blog design. Plus I can't make up my mind on what to do on anything. No big deal, this is a common occurrence with me. 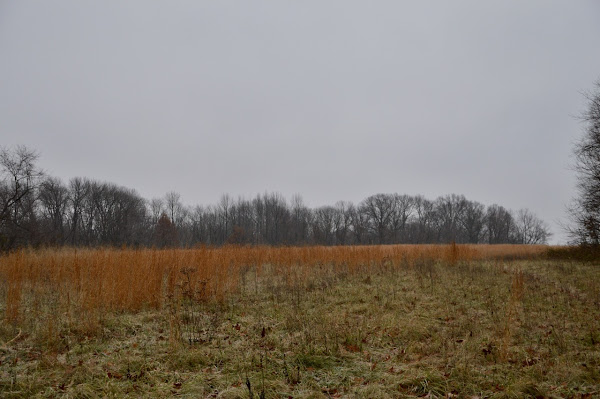 I am going to try something different on this post, let me know how you like it. I am going to put a little commentary about the photos listed and will wait until the end to write what's on my mind or as I call it ... 'rambling'.

It was still fairly dark this morning just like the past two days. I planned on waiting until 9:00am before starting the walk but Stella had other ideas. I heard her walk across the hardwood floor in the bedroom from her 'after breakfast' nap. That plan of waiting an hour was gone as she stood at the doorway of my computer room, whining. It was 8:03am, her normal time. 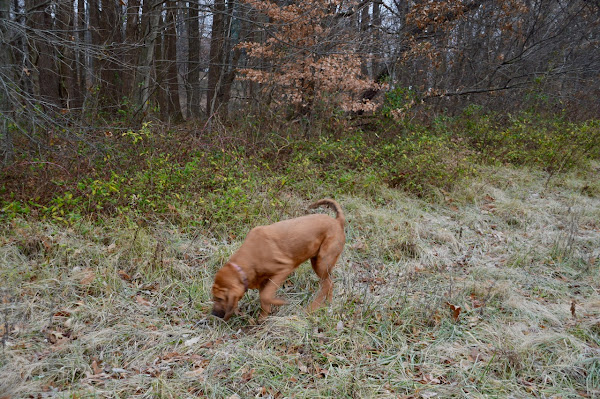 She was in the tracking mode again this morning. Signs of deer traffic were all over the field. I could see fresh hoof prints that had dug into the ground through the thick grass. I like these mid-40's temperatures so early in the morning, with only two days before Christmas. 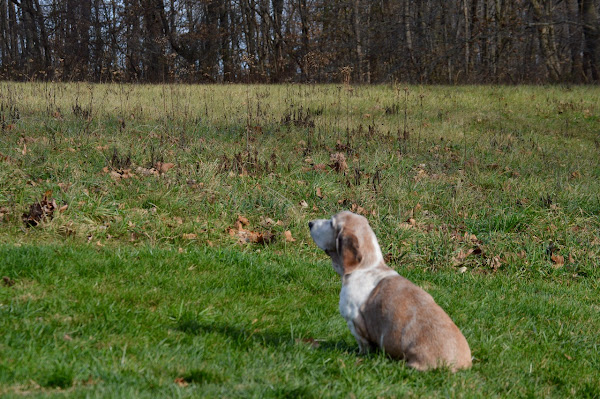 This warm weather isn't something new. It was Christmas Day just three years ago where Winston sat outside looking for snow and wondering why it was so warm. He had become paralyzed from the middle of his back and rear legs just six days prior. To this day it is still a kick in the gut when I think about it. 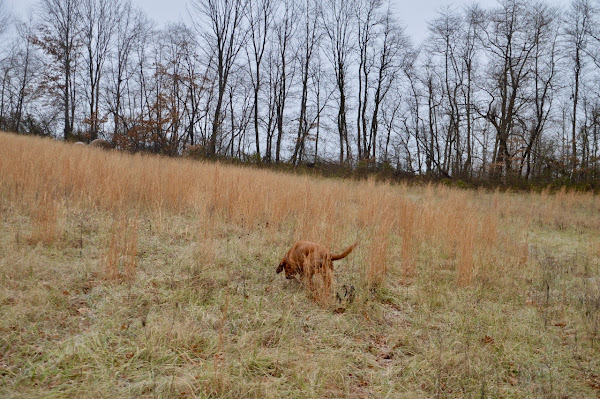 Instead of trying to keep Stella on or near my path, I decided today I would follow her. Her nose was right on point, in the middle of deer tracks, with those hoof prints I mentioned but also a couple of other signs I'll get to. 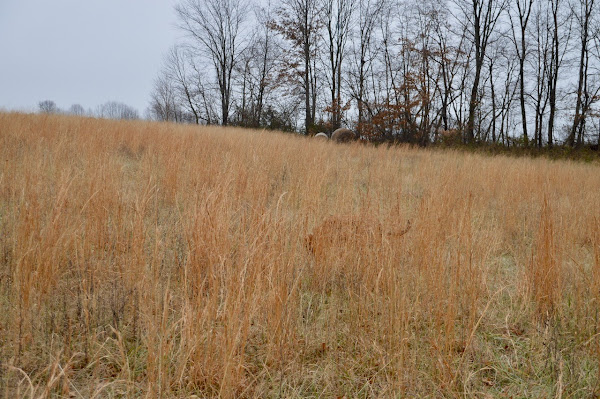 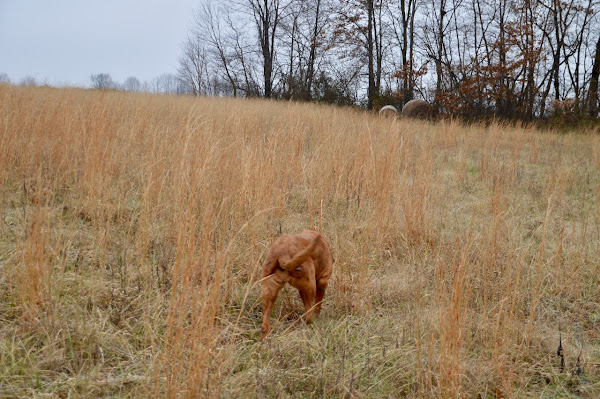 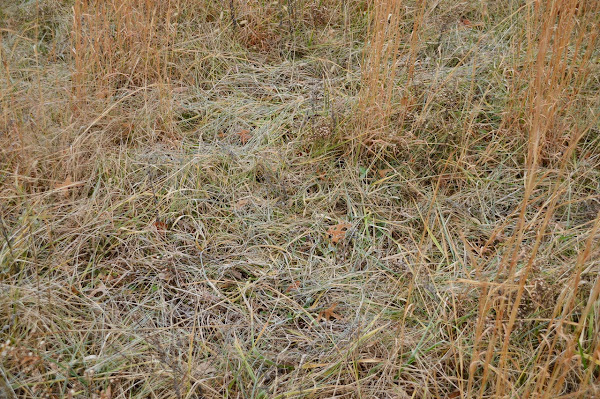 I am not a deer hunter, nor a deer expert but I am assuming with the way the tall grass was pressed so close to the ground, that is a place where a deer might have laid down to sleep? I'm serious when I ask that because I have no clue. I know my answer is just a few keystrokes and clicks away if I asked that same question on DuckDuckGo image search. I thought I'd show just how little knowledge I have when it comes to any kind of wildlife. 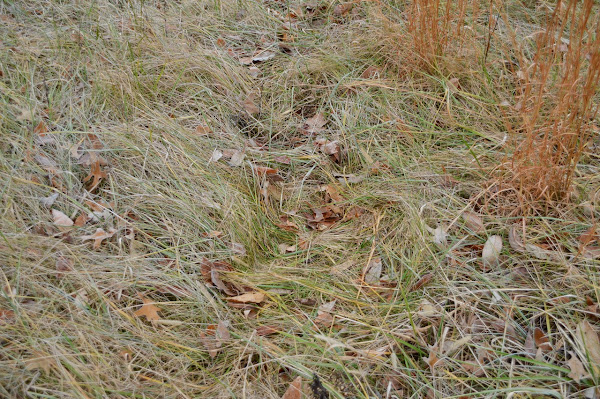 Here is another more prominent 'bed', only this time the grass looked like it was almost damp compared to the grass around it. Something had been laying here an hour or two before we got there. You can see the two hoof prints, looking as if it dug in as the deer tried to stand up. 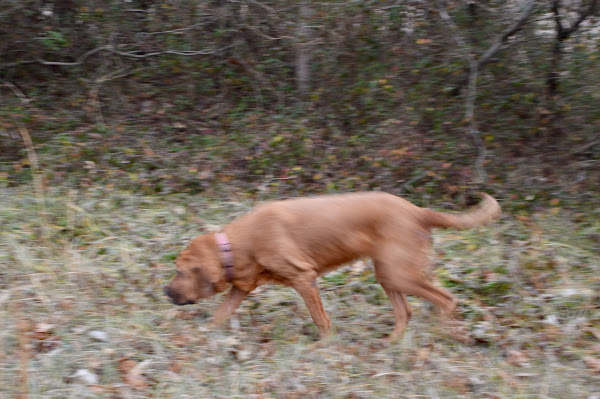 A poor quality photo but shows that Stella is on the move. That is rare for her and I can assure you she will not move that fast on any afternoon walk. Never 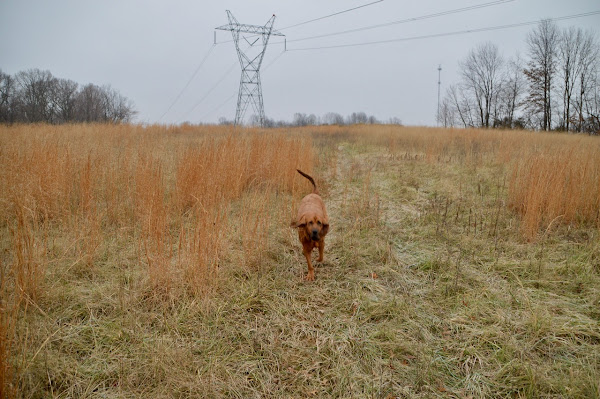 I tried getting as far ahead as possible  so I could possibly get a photo of her running. By the time I turned she was already running at me and she was so quick I barely got this photo and the one below. 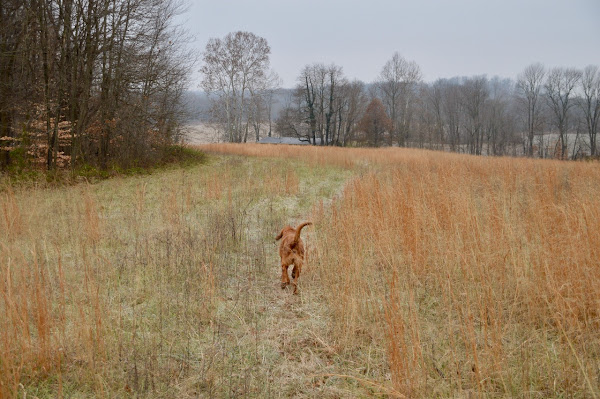 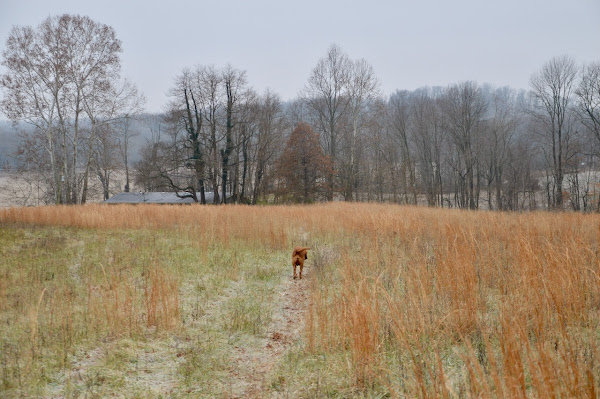 Obviously she wanted to get way ahead of me. 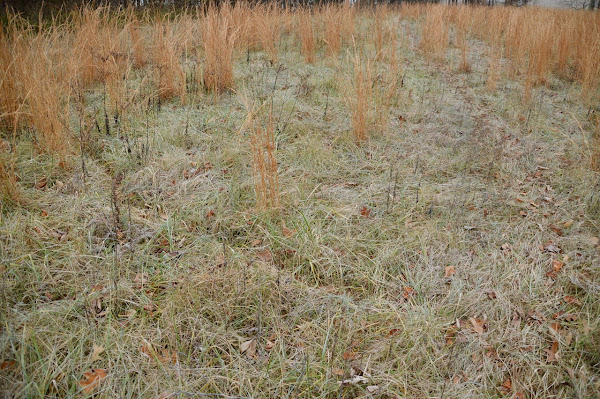 As I walk on the path you can barely see on the right edge of the photo, towards home, this small path crosses both of our paths moving left to right in this picture. It is the deer path from the woods, across the field, to the woods behind my neighbor's house. 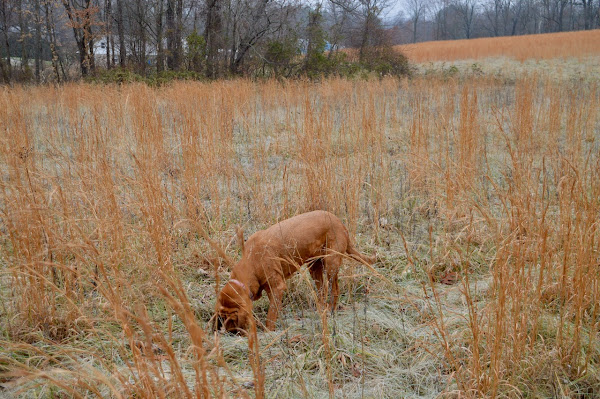 As we slowly make our way home ... Stella isn't done with her exploration. Too many scents to smell and catalog in her computer database called 'the bloodhounds brain'. 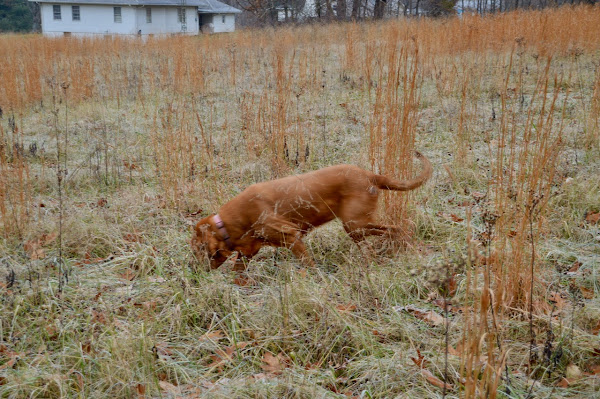 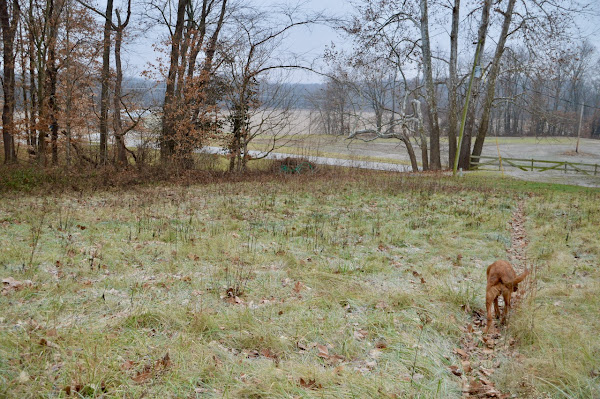 I knew something was strange when she abruptly moved from the center of the field heading to the backyard over to the path I take back home. She rarely does that, so something is up. 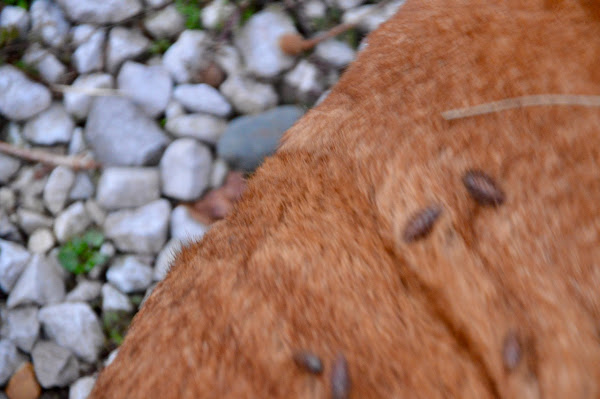 While taking some other photos of the woods, sky and my house roof I did not notice she had moved left of the path into the "land of burs". This is blurry but will give you some idea what those burs look like attached to her coat.

I was trying to hold her with one hand and take a photo with the Nikon D3200 in my other hand. She was covered with them on the other side. She thought she was going inside with all of them attached. :) :) :)

Just like I said I would yesterday, after the IU game was over a little after 8pm, I slid back into my desk chair to play around in the blog "dashboard", looking for that 3-column theme and photos just as big if not bigger when the post is opened up to read. At least you can sort or filter the 300+ themes to choose from by what you want. Not in detail but just some basic things. I tried this ... "3-columns, page-wide images". The number of themes to look at went from over 300 to 86.

Long story short, by 12:35am I had a theme I thought I liked. It was soooo much different from this one but it did have the two things I wanted, 3-columns listing 9 past posts on the homepage and images that were even larger than what you see here Sunday.

Yet as I looked it over there was just something I didn't like. Was it the all black background or that the three columns did not line up exactly perfect because some of the thumbnail photos were different sizes? Stuff like that drives me crazy, similar to a crooked picture on the wall ... anybody's wall.

With the lights turned off, computer turned off and both hounds asleep, my overactive brain was wide awake and still working at warp speed. 15 minutes later I jump out of bed, lights on, computer on .... yes, I was changing the theme back to what I had at 8pm Saturday and right now (unless I change it again Sunday). {I changed it a little after 2pm on Sunday}  Ha Ha Ha Ha!!!

With the different theme design I had to quickly edit my last nine posts, taking out the feature image, then installing the 'excerpt' so the posts would be summarized on this themes homepage. This morning with some help from the Wordpress techies I was able to install some CSS code to remove the categories that were above the titles of each individual post.

Here is the 'sick' thing with me. The blog looks good to me. It's easy to read, it's bright and easy to navigate BUT .... I still have a small urge but big enough to have me look at other blog themes (design) and possibly make changes today. Somebody take my computer away from me!!!

Oh, that is not all I can't decide on. That slight confusion of never making my mind up occurred all day Saturday. I went back to logging in all my food, at least for now. This morning I brought out the small container of granulated sugar for two level teaspoons per cup of coffee. (interesting results).

Those results were immediate and surprising. I tried the sugar again because I didn't want to wait for a month or a year to see if there was a difference. I found out something before I even finished my second cup of coffee. By adding that sugar I was feeling a little indigestion. Enough to notice the difference from the past four to five days. I'll not be using sugar anymore in my coffee, nor will I buy anymore granulated sugar nor substitutes.

I even thought about starting a new blog that was subject specific ... sports!!! What am I or was I thinking ???? It has to be the 'winter mentality' that keeps me in front of this monitor bouncing from one idea to the next while I am doing something else. I need outdoor projects to do.

At least the hounds are sane and keep to their routines without much change. They are mentally stable and know what they want, what they like, etc. They don't bounce from idea to idea. They only get confused if it is raining outside and they have to dump their tanks. Their eating habits and sleeping habits never change although the spots they sleep might.

Hmmmmm do I post this now or wait until tonight with pictures of Heidi. I can do what I use to ... post mid-morning and then include any afternoon photos on tomorrows blog. See, it's questions like that make me move in circles. Don't ask what I want to eat for lunch, I have no idea and if I did I would not be able to decide. How screwed up is that?

It's
the 16th week of 17 weeks of the regular season in the NFL. I'll watch the Colts today and all the playoffs. I have yet to watch a College bowl game because none of the match-ups interested me. It looks like I'll start watching them about every day/night starting December 26th until the final National Championship game. That will stabilize my brain a little to where I will not have time to be making blog changes but I will have time to publish a blog post.

No worries, it's all good today here in 'the tropics' of Southern Indiana. 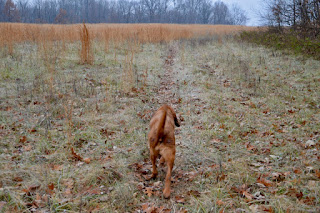